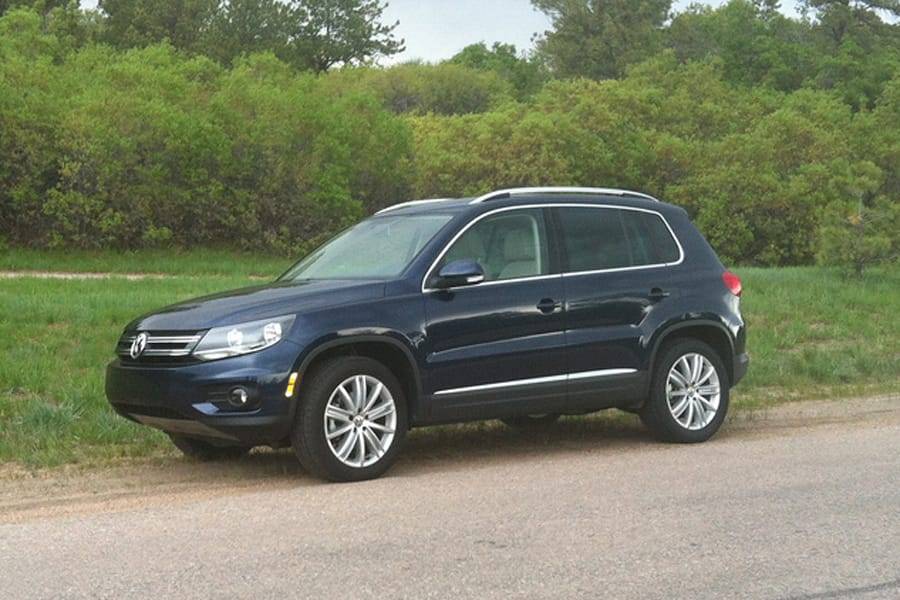 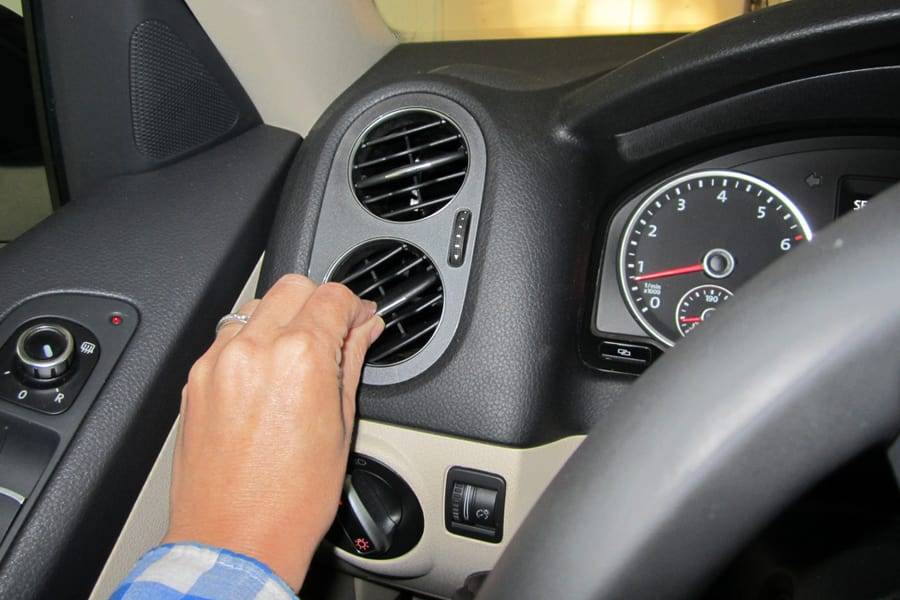 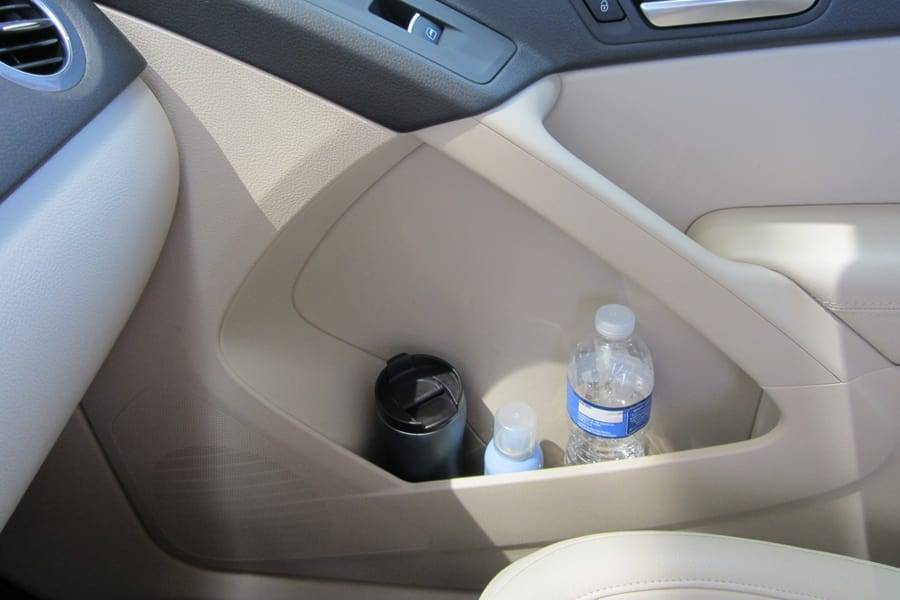 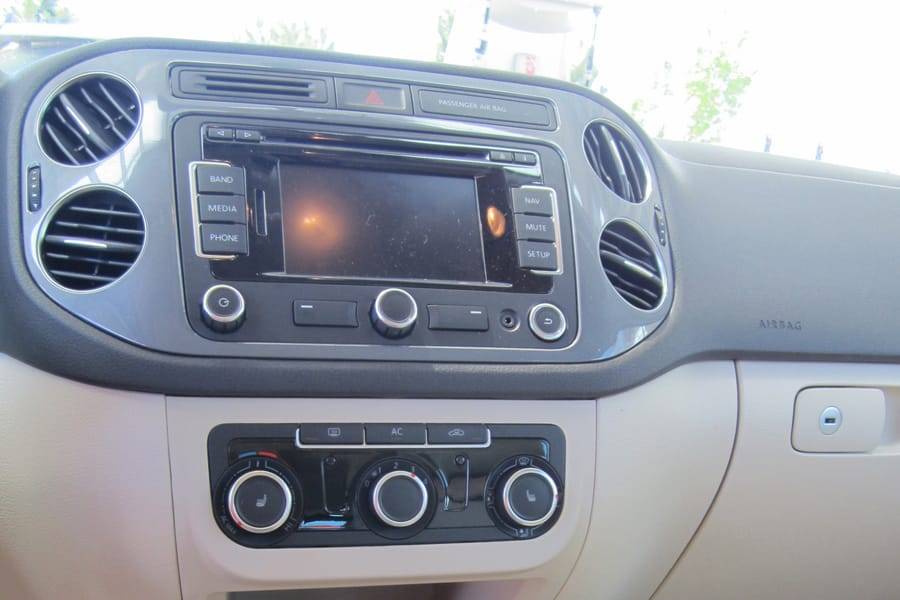 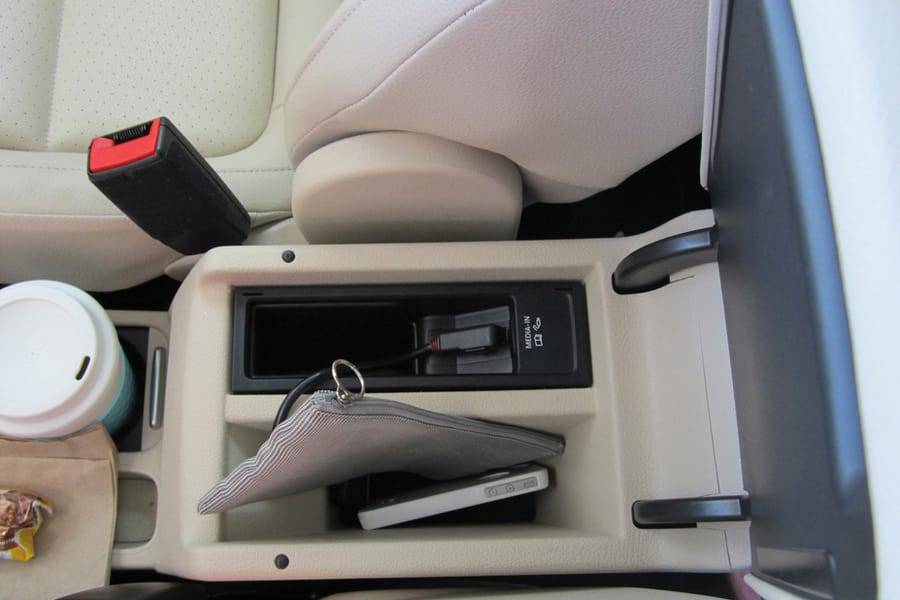 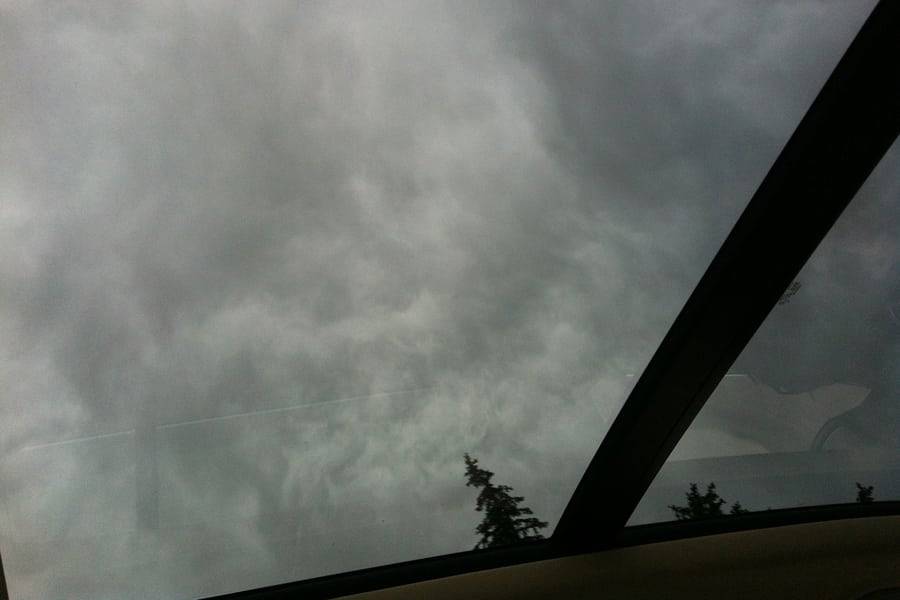 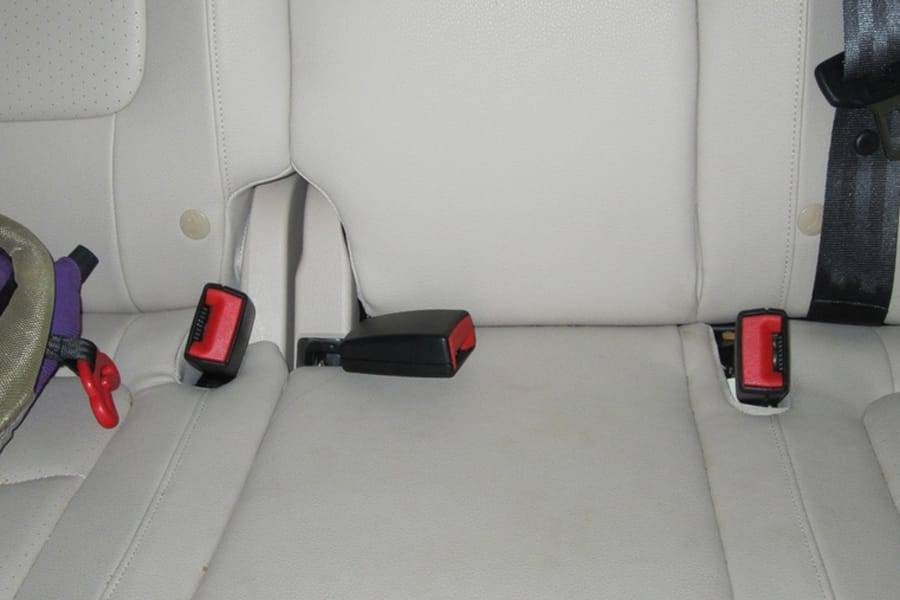 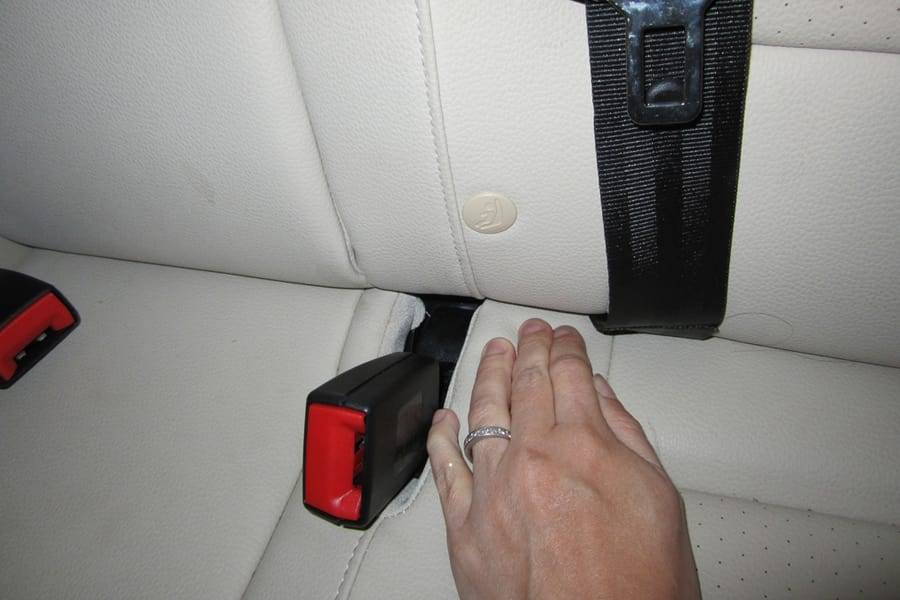 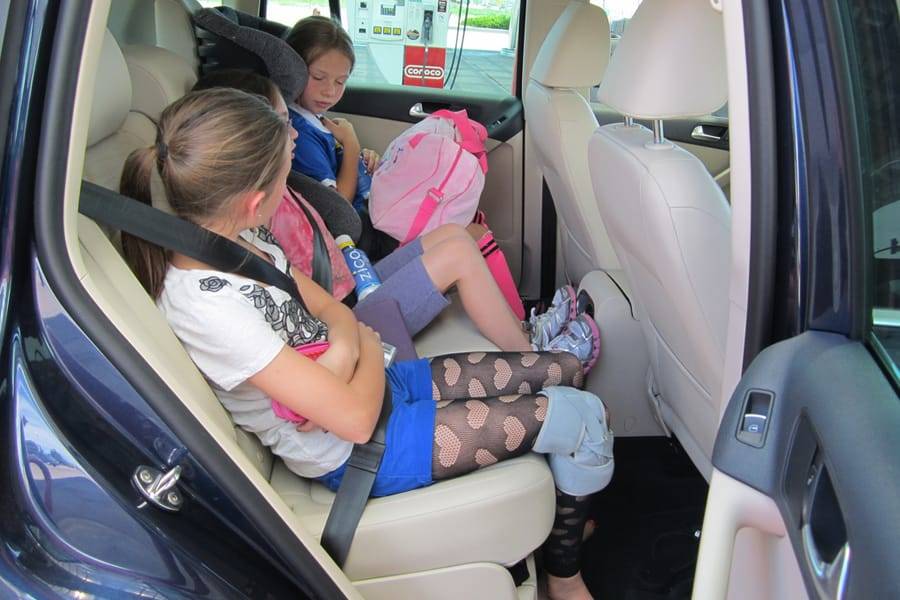 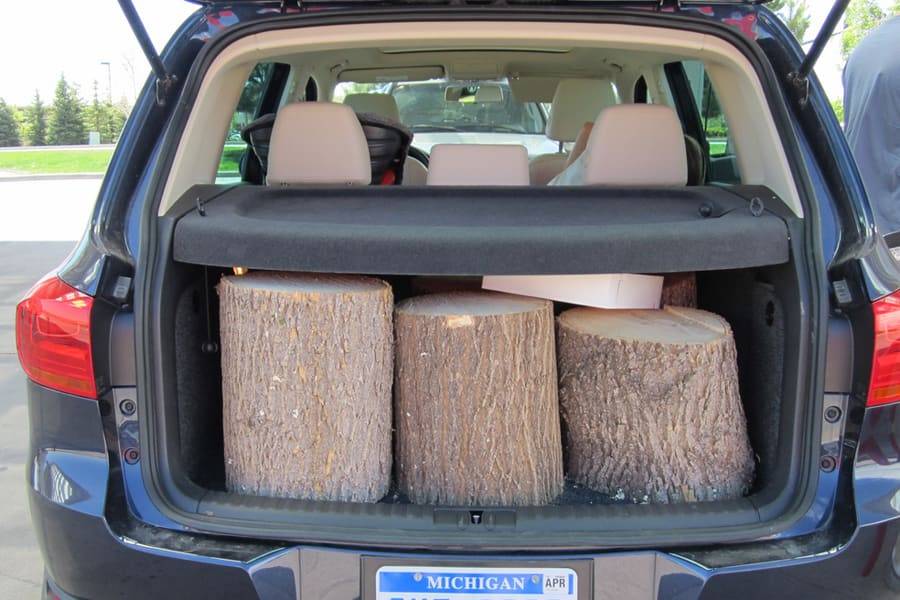 1/10
Slightly restyled for 2012, the Tiguan is between models like the Mini Countryman and Honda CR-V in terms of size. | Toggle between photos using the right and left arrow keys. Cars.com photo by Kristin Varela

The Tiguan’s looks have been updated for 2012, its mileage has improved, and its starting price has dropped almost $1,000 to $23,660 (including the $820 destination charge). See it compared with the 2011 Tiguan here. This year’s Tiguan is available in three trims: the Volkswagen Tiguan S, SE and SEL, each with front- or all-wheel drive. My test vehicle was the Tiguan SE with Volkswagen’s 4Motion all-wheel drive. Compare the 4Motion versions of all three trim levels here.

EXTERIOR
The Volkswagen Tiguan resembles a baby Touareg, VW’s midsize crossover. The Tiguan received some exterior updates for 2012, but the overall style is quite similar to the older version. It somehow manages to look sporty without inching anywhere near the “cutesy” line. The sleek chrome grille and other chrome accents help the Tiguan maintain a slightly upscale edge, so those of us in the over-30 category don’t feel silly driving it.

In terms of interior volume, the Volkswagen Tiguan comes between the Mini Cooper Countryman and big sellers like the Honda CR-V and Chevrolet Equinox. The kids in the backseat had plenty of legroom. The rear seat splits 60/40, and each portion slides back and forth to customize the space. Horizontal space is at a premium, however; it was difficult to squeeze in three kids side by side. I got them all in, the youngest in a Britax high-back booster seat in the outboard position and the other two tucked in cozily shoulder to shoulder. They had to develop a system of buckling their seat belts one by one in the proper sequence in order for each to reach their belt buckles. My daughter in the middle position needed more time because of the buckle’s awkward inward-facing design. (More info in the Safety section below.)

The highlight of the car for all of us was the huge and extremely impressive panoramic glass roof above the driver, passenger and backseat rugrats. We had several days of overcast weather while driving this vehicle, and it was great to open the shade, let some extra light in and get a small dose of vitamin D. The kids loved watching the storm clouds roll in as we drove home from school.

There is 23.8 cubic feet of cargo space behind the backseat, more than enough room for my family. We managed to stash a soccer bag, two backpacks and five tree stumps to make little outdoor side tables for our patio. The cargo space expands to 56.1 cubic feet when you fold the backseat. There’s even a standard fold-flat front passenger seat. The Volkswagen Tiguan’s cargo dimensions fall between those of the Countryman and the other models mentioned above.

My test vehicle’s 200-horsepower, turbocharged 2.0-liter engine was kind of confusing. It had plenty of get up and go around town after stop signs, and it was generally a pleasure to drive for quick errands here and there. However, when trying to get up to speed on the highway, it felt slow and slightly underpowered. It took an extra few seconds of patience waiting for the car to catch up to my accelerator input.

The all-wheel-drive Volkswagen Tiguan comes only with a six-speed automatic transmission and gets an EPA-estimated 21/27 mpg city/highway. With front-wheel drive and an automatic transmission, the Tiguan’s rating gains only 1 mpg city at 22/27 mpg. While the Tiguan is one of the few models in its class to offer a manual transmission, a six-speed, it’s the least efficient of the Tiguans, rated at 18/26 mpg. Although these ratings are 2 mpg better than the 2011 model, they’re low compared with the competition, and the Tiguan calls for premium gasoline whereas most use regular.