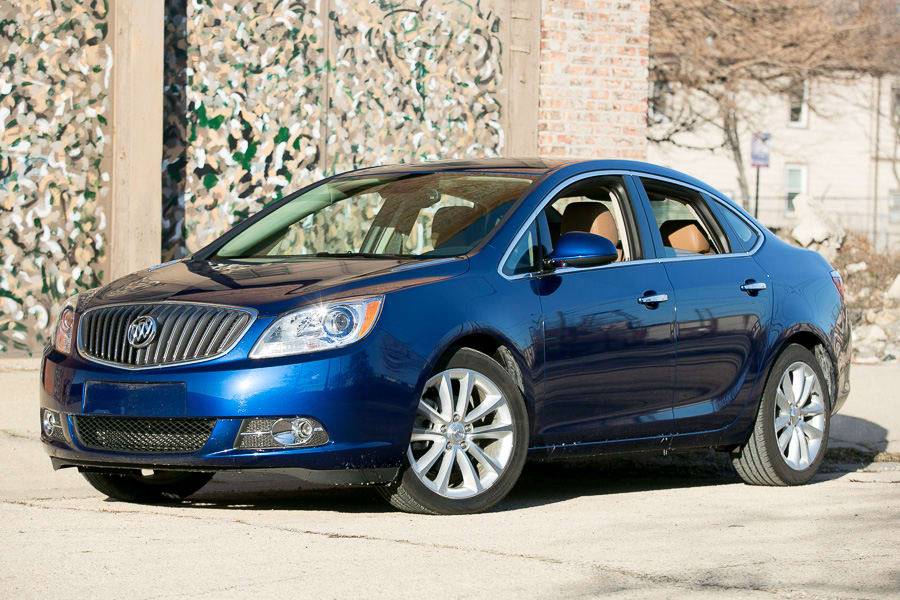 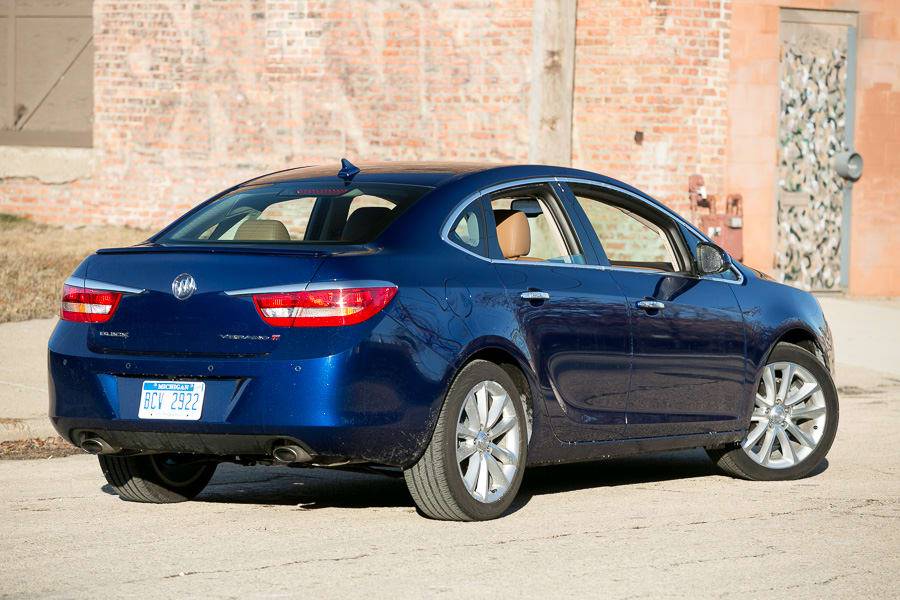 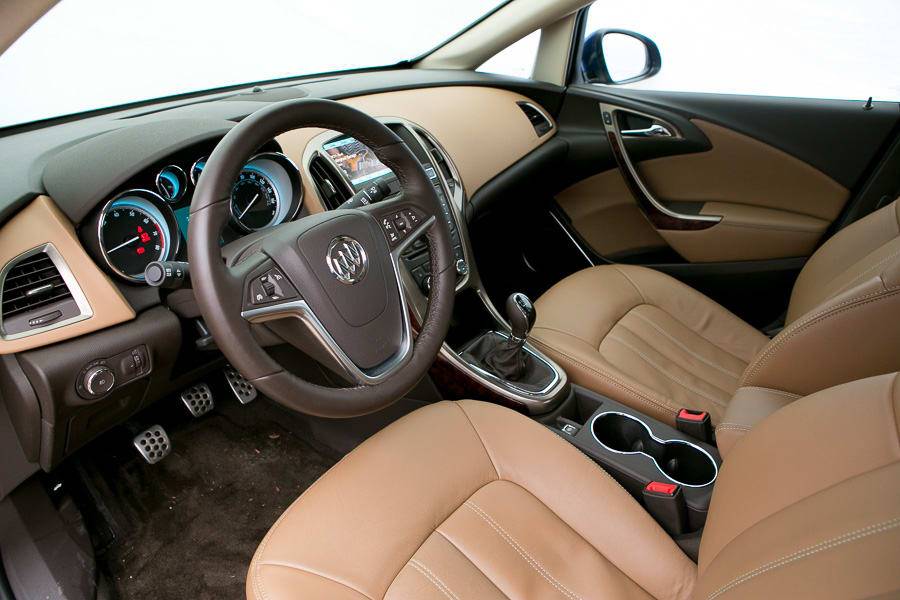 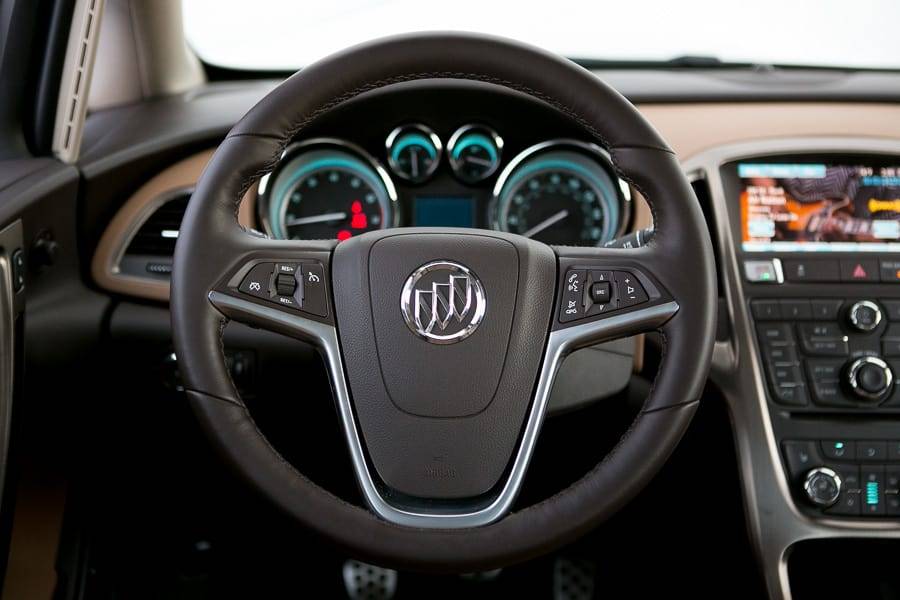 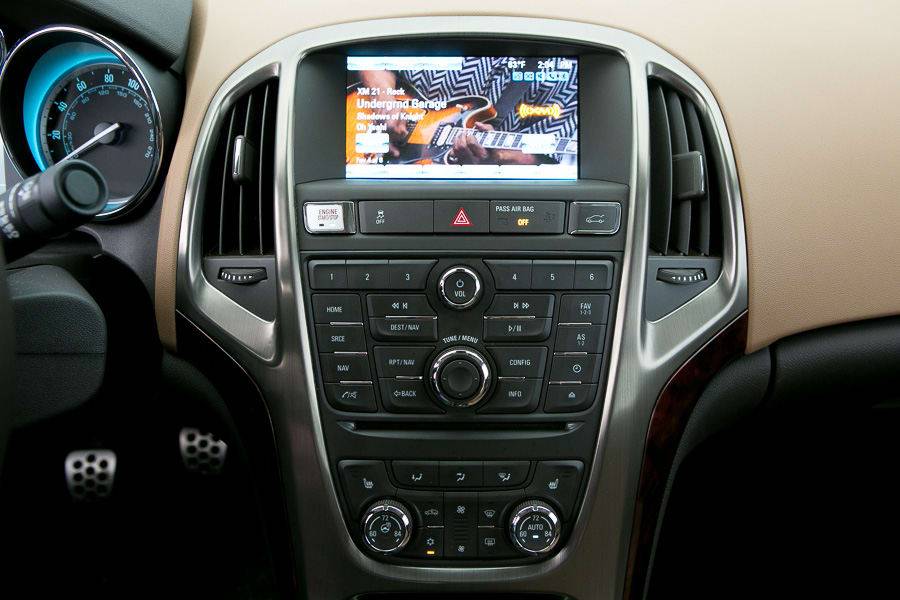 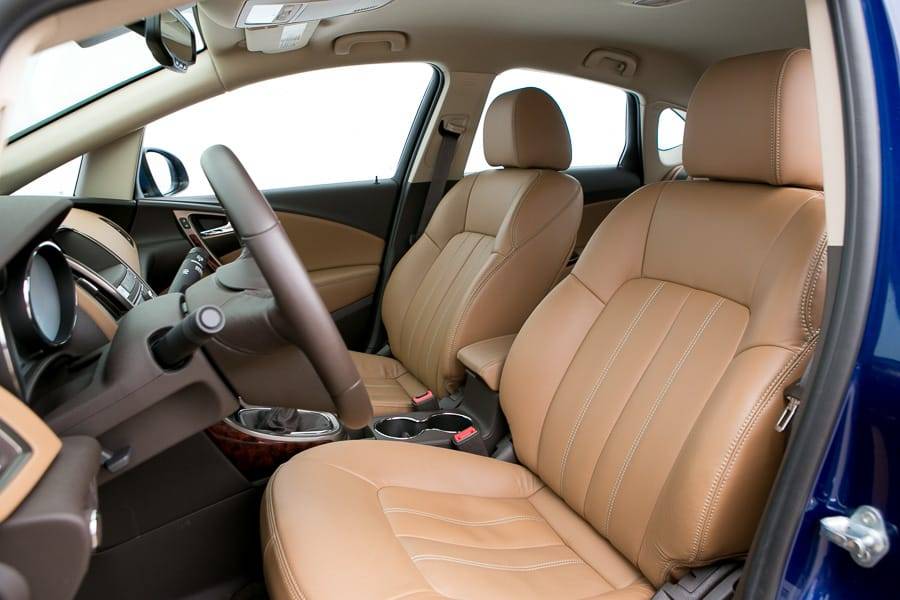 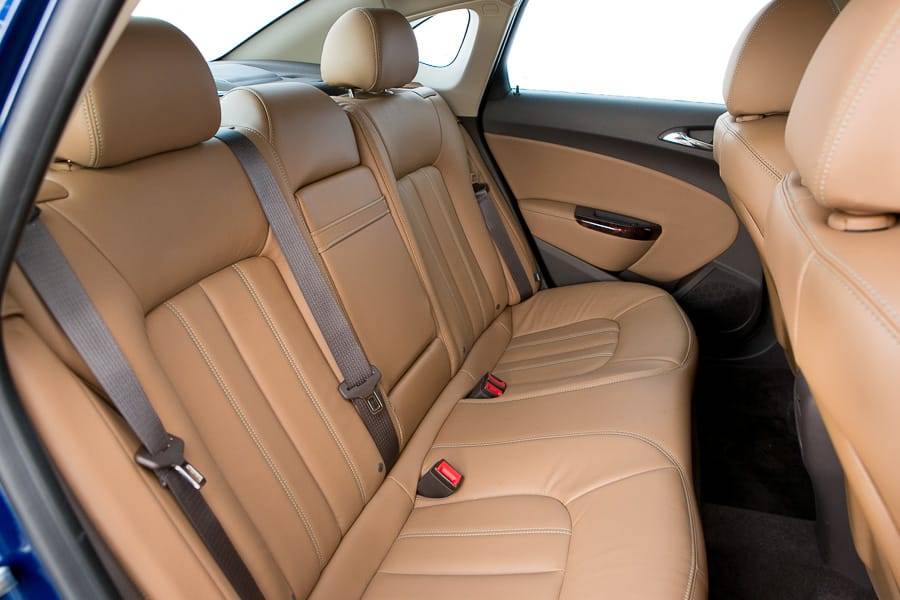 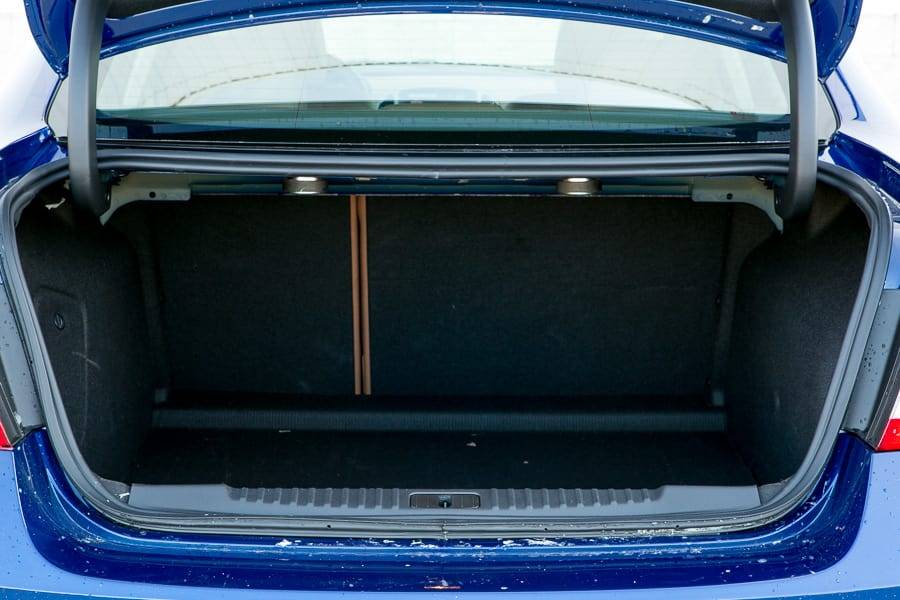 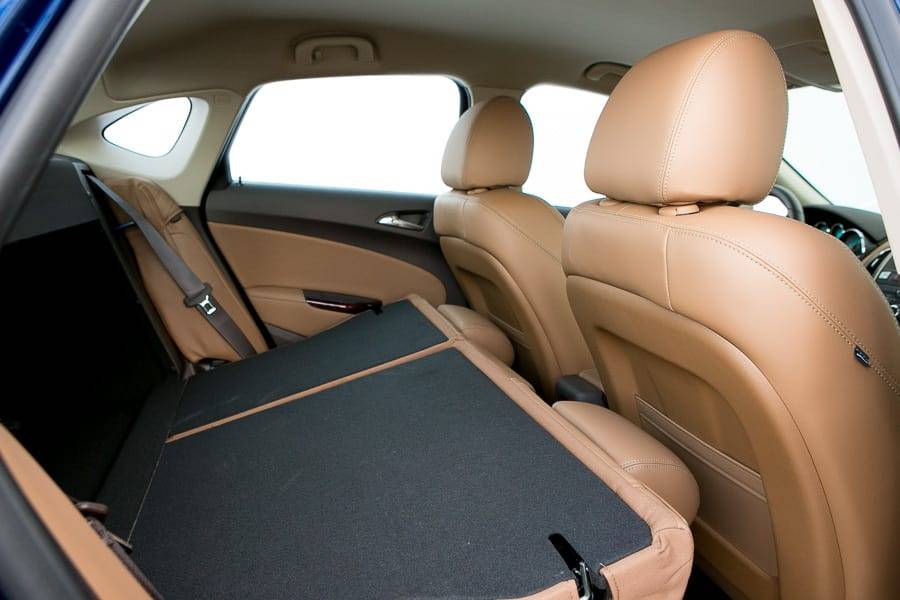 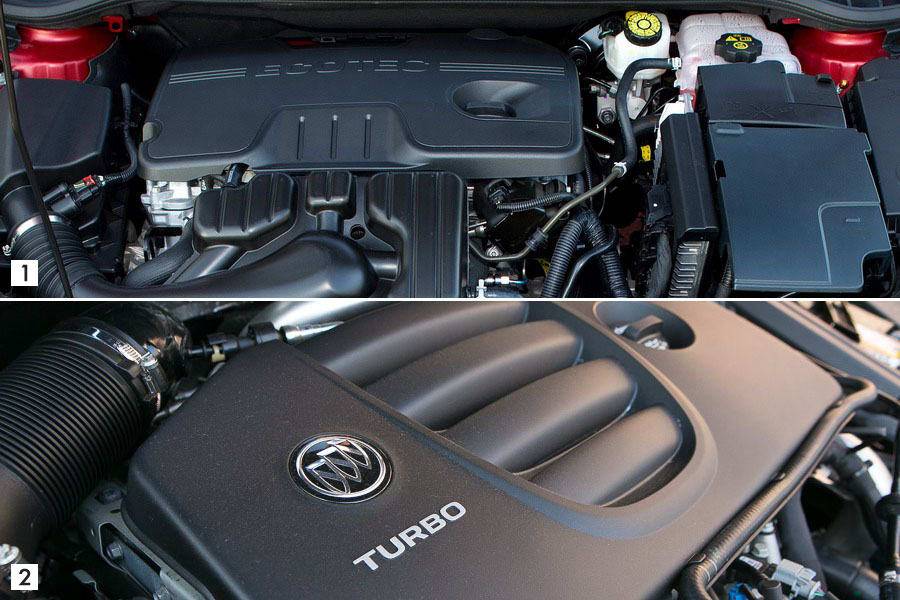 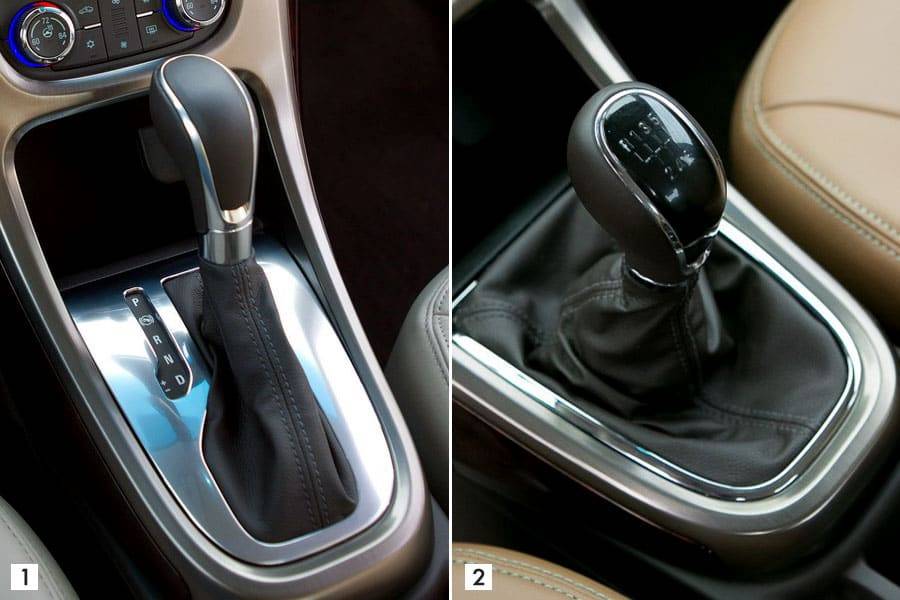 1/11
Around 6 inches shorter than the Regal, the Verano is the smallest sedan in Buick&#39;s lineup &mdash; though it&#39;s still 2.9 inches longer than the Chevrolet Cruze, with which it shares a platform. (Both brands are GM subsidiaries.) The Verano has sof | Toggle between photos using the right and left arrow keys. Cars.com photo by Evan Sears

A few drawbacks tarnish the turbo 2013 Buick Verano, which is an otherwise refined sedan with sleeper performance if you rev it out.

A year after its introduction, the Buick Verano gained an optional turbocharged four-cylinder from Buick’s larger Regal. Think of it as a sophomore-year hand-me-down — and one that any car should want. It gives the little Verano unexpected high-revving muscle. Unfortunately, its report card also has some blemishes, which I’ll detail further on.

See my review of last year’s Verano for a broader overview of the car and its normally aspirated four-cylinder. The turbo comes on the highest of four available trim levels — the Verano Premium, which Buick added for 2013 and which we tested (see the window sticker here). You can also get the Verano in base, Convenience and Leather editions. Compare them here, or compare the 2013 and 2012 Verano here.

Going & Stopping
With its normally aspirated, 2.4-liter four-cylinder and six-speed automatic, the Verano has adequate passing power. The turbocharged four-cylinder turns the car into a smooth-revving sleeper. It’s one of the quickest Buicks I’ve ever driven — a list, alas, that does not include the famed GNX of the late 1980s. But the Verano turbo holds its own. The 250-horsepower, turbocharged 2.0-liter four-cylinder launches with some turbo lag, but past 2,700 rpm or so it hurtles the Verano toward redline. You don’t feel it coming — and you certainly don’t hear it. The drivetrain is whisper-silent at low speeds, with a muted whooshing as the turbo comes alive a few moments after you mash the pedal.

The competing 2.4-liter Acura ILX launches with more immediacy, but the Verano flies ahead once it shakes off the low-rpm lag. Indeed, various enthusiast publications have gotten the stick-shift Buick to hit 60 mph in the 6.5-second range.

About that stick shift: It’s a no-charge option over the six-speed automatic, but editors agreed it’s a disappointment, with muddier throws than the better stick in Buick’s Regal GS. It clunks into 1st gear or Reverse, both far to the left, with stubborn resistance. Going from 2nd to 3rd is a long throw, and the gearing works against you during hard on-ramp charges. First and 2nd are short, but then you land in an abruptly tall 3rd. By 5th gear you’ve been dumped into lope-along highway rpm. At least there’s prodigious-enough torque — 260 pounds-feet at just 2,000 rpm — to muscle ahead. But try to downshift and the drivetrain’s accelerator lag hampers any efforts to rev-match. I love manual transmissions as much as the next car guy, but the automatic might be a better choice in the Verano.

Ride & Handling
With the same 18-inch wheels and P235/45R18 tires, the Verano maintains a settled ride that follows in the Buick tradition. Editors were split on steering feel. Some found it spot on — light at low speeds, sharp in the curves — but others found it sloppy. The car still tends toward understeer, but it feels less nose-heavy than the 2.4-liter Verano. Still, quick changes in direction produce noticeable body roll, and the low-tech semi-independent rear suspension, along with our tester’s Continental ContiProContact all-season tires, made for plenty of skittishness over bumps. Don’t relish those cloverleafs too much; a midcorner expansion joint will have the Verano dancing about.

Those same tires kick up a low rumble on the interstate, but overall cabin noise is low. Come to a stop, and the all-disc antilock brakes have linear pedal feel.

The Inside
See my review of the Verano for an overall take on cabin quality. Materials remain competitive with the entry-luxury class, but crowded center controls, a tight backseat and sight-line-robbing window pillars remain downsides. Buick’s standard IntelliLink system is fairly robust; it has a 7-inch dashboard screen with Bluetooth phone and audio streaming, plus USB and auxiliary jacks. Internet radio providers Pandora and Stitcher can also stream off your smartphone via a corresponding IntelliLink app. Unfortunately, editors found the Verano’s optional Bose stereo (included in our test car) unimpressive.

Our car had keyless access and push-button start, with unlock buttons on the front and rear doors. It’s convenient — many luxury cars include just the former — but there’s no trunk-mounted release. You have to fish the key fob out of your pocket or purse to unlock the thing, which defeats the purpose.

Safety, Features & Pricing
Top crash-test results by the Insurance Institute for Highway Safety made the Verano an IIHS Top Safety Pick. Like most cars, however, it has not undergone IIHS’ new small-overlap frontal test. Standard safety features include 10 airbags, all-disc antilock brakes and the required electronic stability system. New for 2013, a blind spot warning system is optional.

Like its Chevrolet Cruze sibling, the Verano has had abysmal reliability in its first year. The Cruze improved in its second year — 2012 — so here’s hoping the Verano does the same. Until that’s evidenced, however, exercise caution.

The Verano starts around $24,000 including destination charge. Standard features include Buick’s IntelliLink system, a leather-wrapped steering wheel with audio and cruise controls, cloth-and-leatherette (imitation leather) seats and dual-zone automatic climate control. Full leather upholstery, a heated steering wheel, heated front seats, a power driver’s seat, a navigation system and a moonroof are optional. The turbocharged four-cylinder comes only on the Verano Premium Group, which starts around $30,000. Check all the factory options, and the Verano tops out just more than $33,000. Even at that price, strangely, a power passenger seat isn’t available.

Verano Turbo in the Market
Buick needs to right its reliability ship, and turbo shoppers can probably skip the manual. But the Verano is off to a strong start, outselling all other Buick sedans in the first month of 2013. The turbo adds some bite without compromising the car’s refinement. Given the influx of so-called “entry-luxury” cars — the latest attempt to attract more buyers to the upscale ranks — the Verano should see increasing interest.