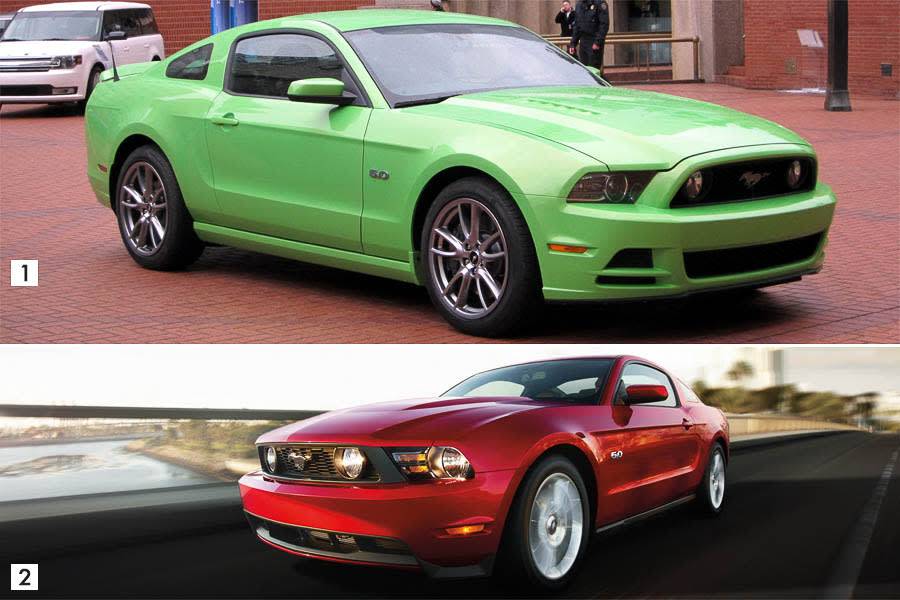 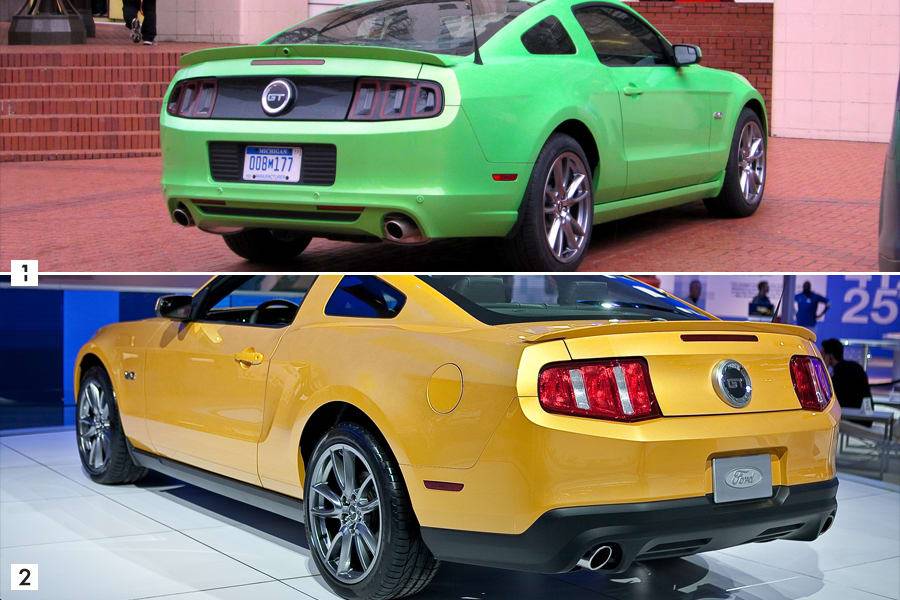 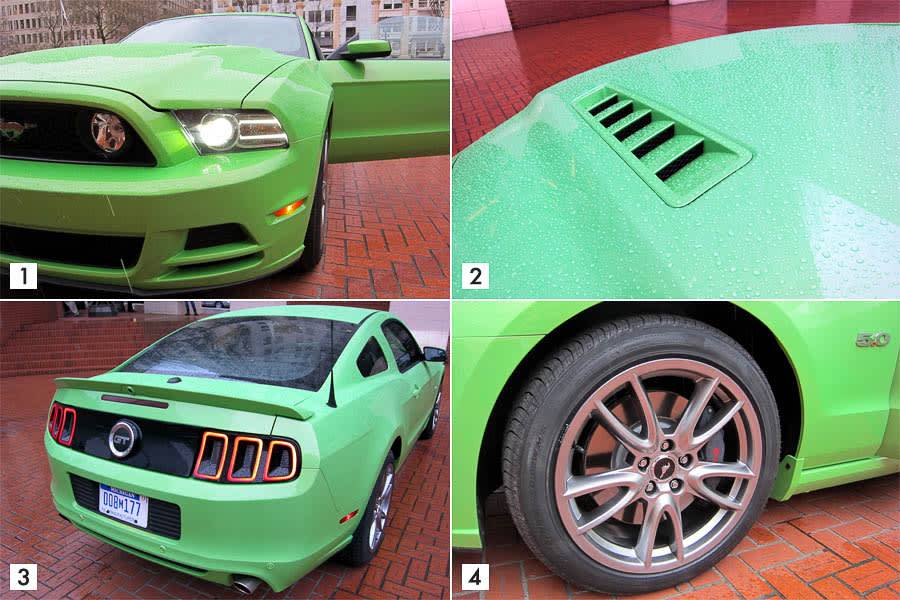 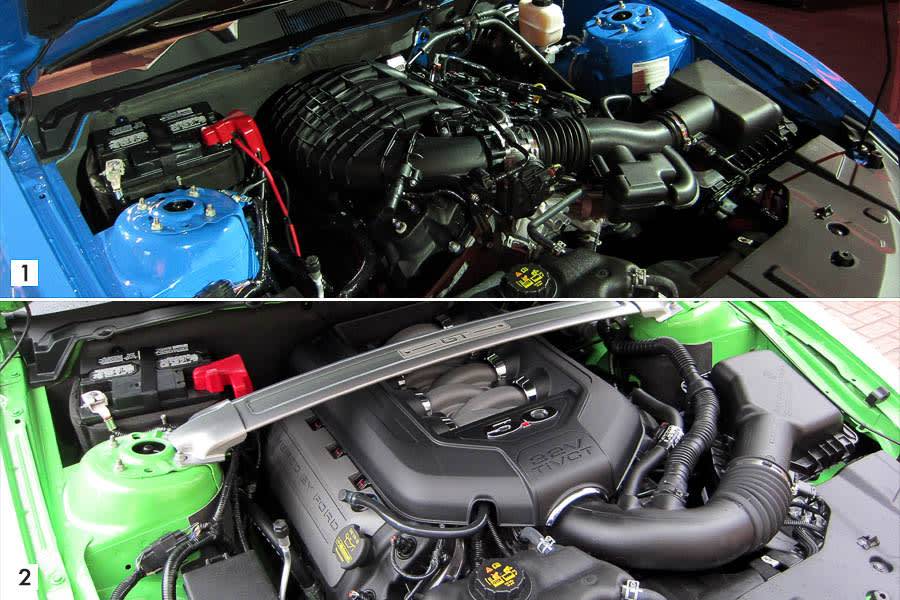 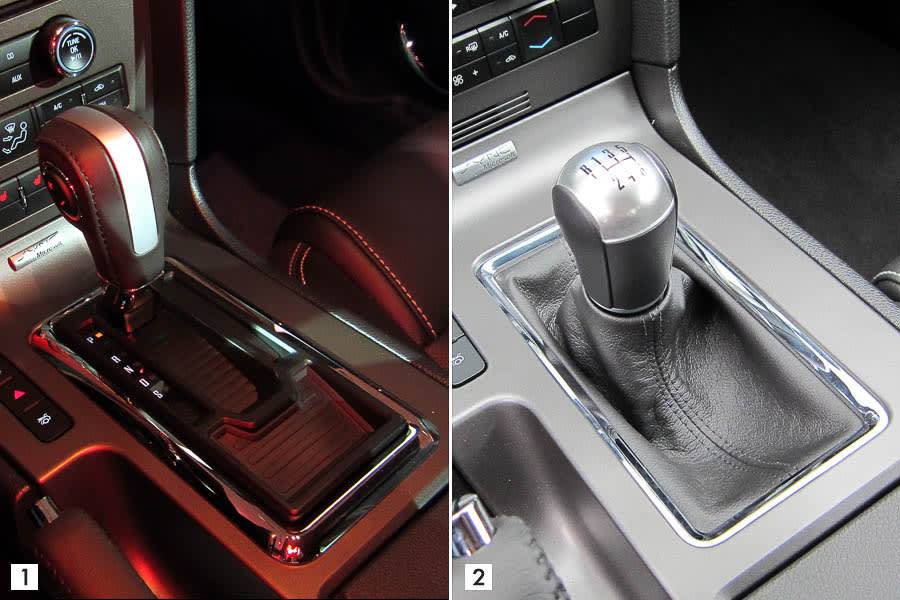 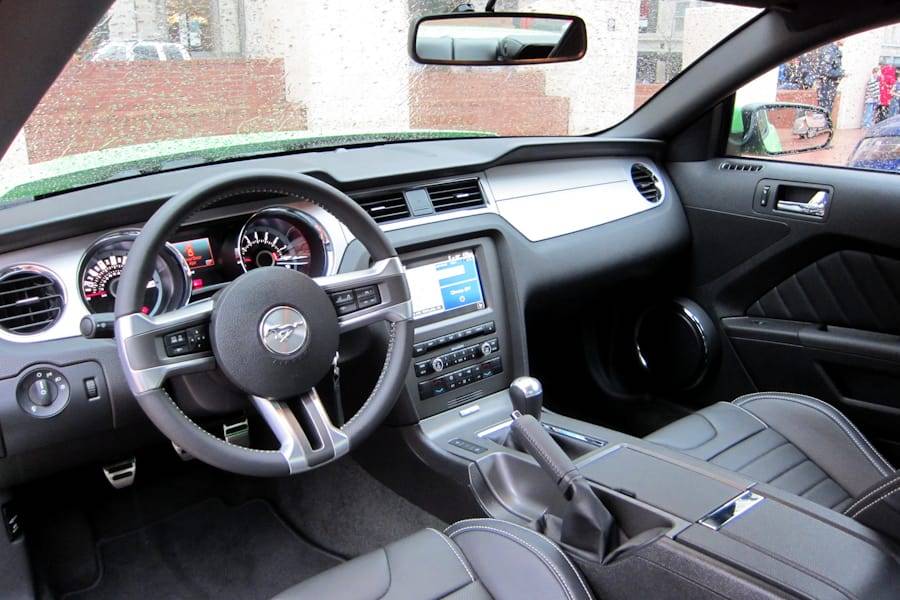 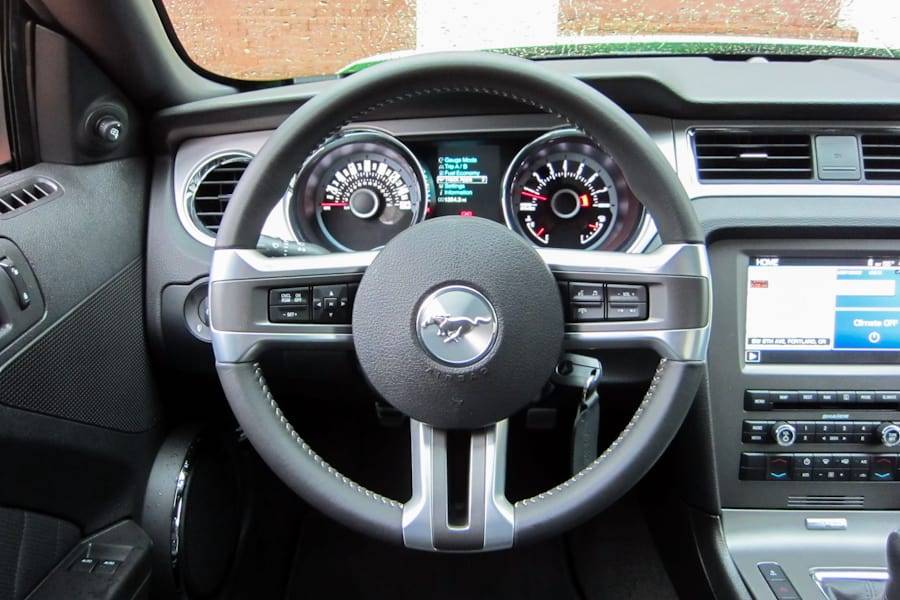 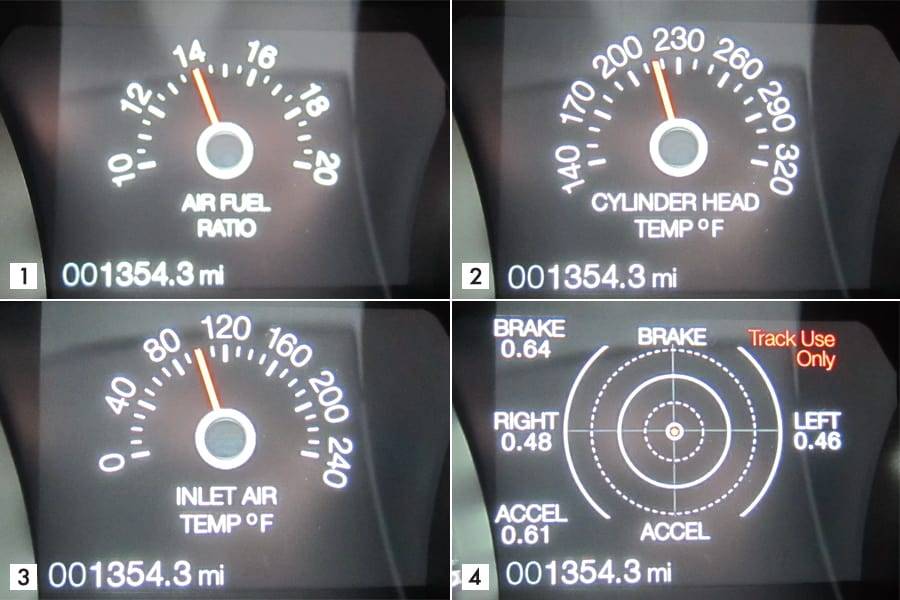 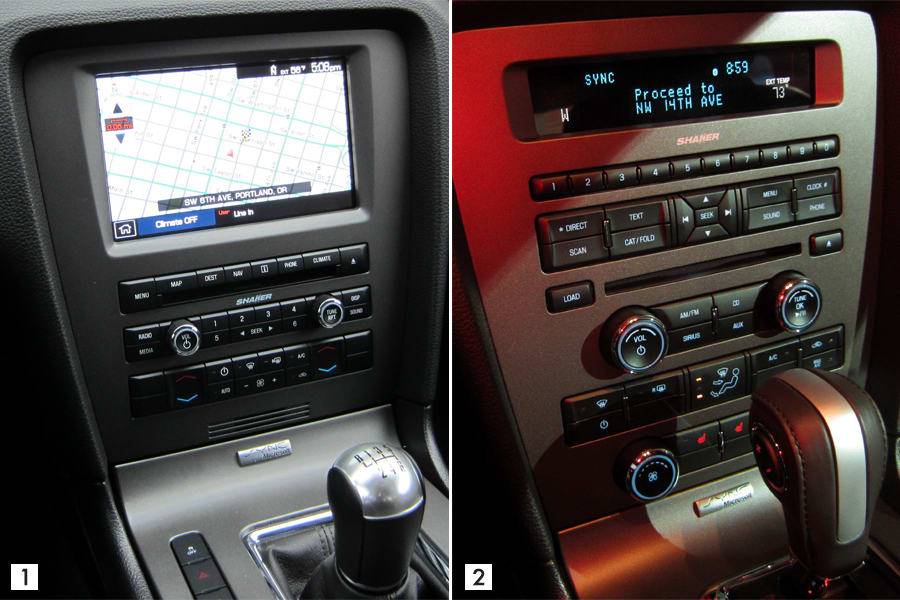 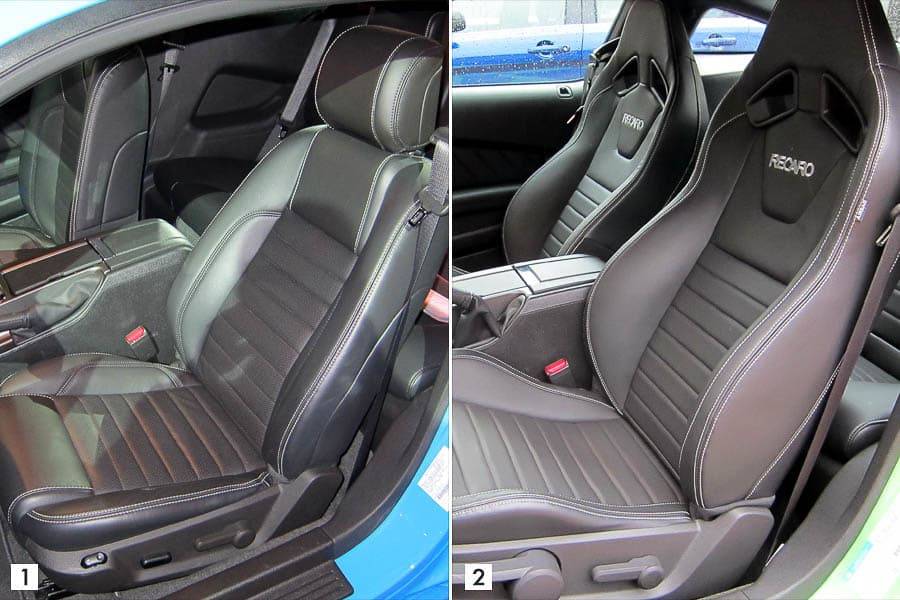 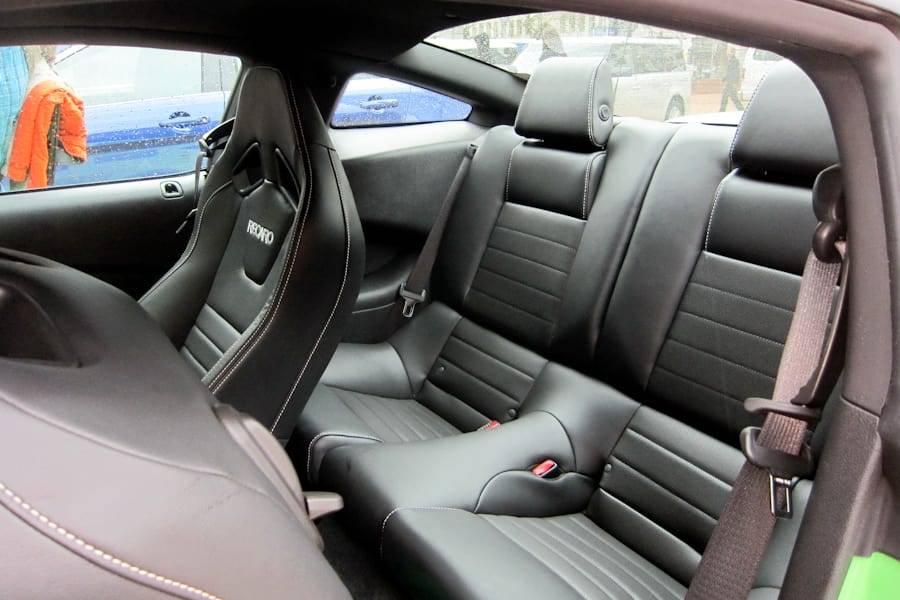 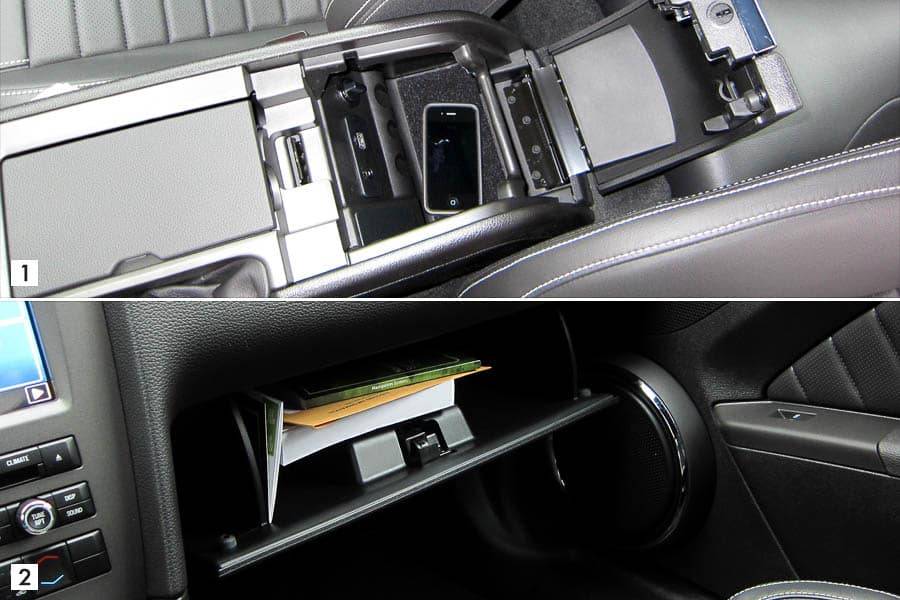 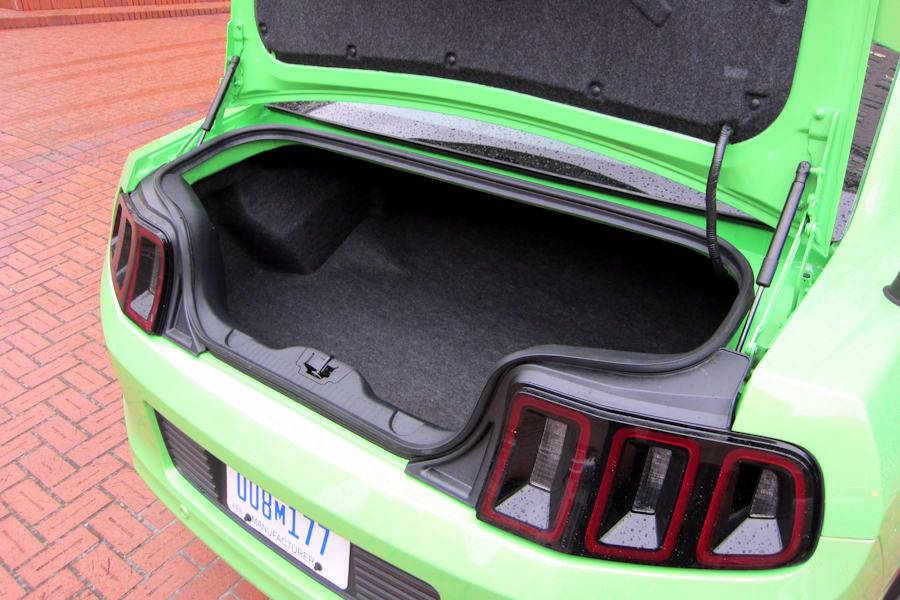 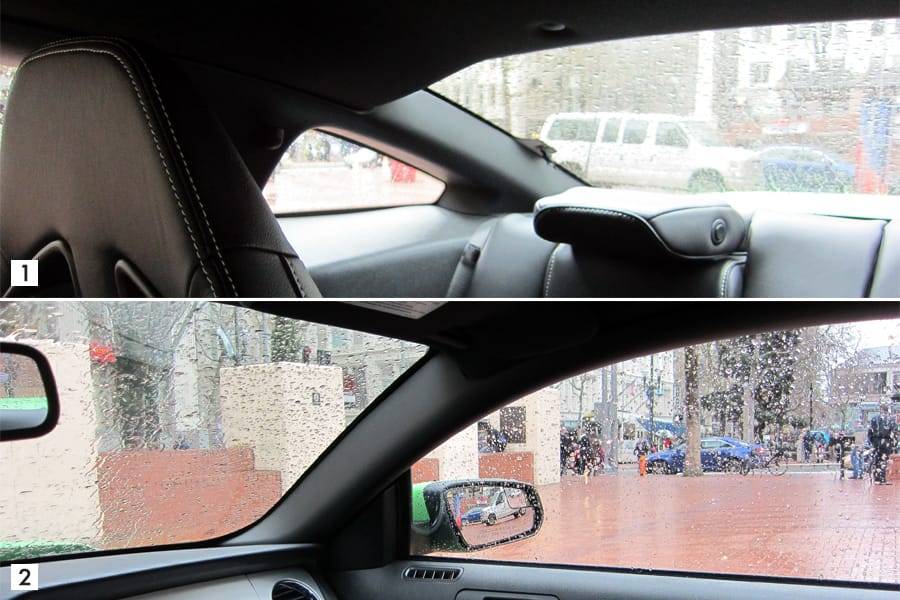 Fast forward to 2013 and Ford has updated its pony car for the third time in four years, adding a few horses to the 5.0-liter V-8 GT and tweaking the whole lineup’s appearance. Meanwhile, the EPA still rates the Mustang coupe’s 305-horsepower V-6 at 31 mpg on the highway. Knowing what was to come would have blown our minds faster than an AP Calculus final.

I’m not sold on all the visual updates, and the interior needs work; so does the coupe’s crashworthiness. But the Mustang still combines scrappy fun with everyday livability, and it should draw buyers even as competition heats up not just from Chevy’s Camaro, but also from Hyundai and Dodge.

The Mustang used to have two headlamp arrangements — iconic outboard halogen lamps or lizard-eye xenons that sat inboard. The inboard xenons are now standard. They still look reptilian, but horizontal LED daytime running lamps now flank them. It’s an interesting effect, and the reshaped grille — including a new front air splitter — increases downforce on the Mustang GT, which Ford engineers called “the best V-8 we’ve had by far” in terms of aerodynamics.

Stick-shift GT coupes add an optional Track Pack, which combines a 3.73:1 rear axle (versus slower, 2.73 to 3.55 axles for other stick-shift Mustangs) with an engine-oil cooler, an upgraded radio and performance Brembo-brand brakes. They also get a limited-slip Torsen differential from the stupid-fun Boss, with better durability in high-performance situations — like racetracks — than the Mustang’s standard limited-slip differential.

Upgraded Shaker audio systems, a 4.2-inch LCD between the gauges and wider availability of last year’s Recaro sport seats round out the major updates.

Ford offers a litany of variants for the rear-drive Mustang, from V-6 and V-8 (GT) coupes and convertibles to a V-8 Mustang Boss 302 coupe. Compare them here. A 650-horsepower Shelby GT500, available as a coupe or convertible, arrives this summer.

Behind the Wheel
Ford’s 3.7-liter V-6 roars like a V-8, and even with the pokiest (but most fuel-efficient) rear axle, the stick-shift Mustang launches strongly enough to spin the rear tires all the way through 1st gear. The 305-hp drivetrain loses steam as the tach needle swings to redline — territory where the 420-hp Mustang GT shoves you back in your seat.

Friction reductions helped Ford eke out another 8 hp from the 2012’s 5.0-liter V-8, which should match or beat the quarter-mile times of the last Mustang GT that our friends at “MotorWeek” tested: 13 seconds flat. That’s a few tenths of a second faster than a 426-hp Chevrolet Camaro SS.

The Mustang GT needs premium gas to make full power. Ford says it can run on regular gas, but that drops output down to 402 hp.

Ford introduced driver-variable power steering assist last year. Feedback is good in the least-assisted, Sport mode, while Comfort mode makes three-point turns simple to pull off with one palm. (A Normal mode slots between the two.)

The V-6 coupe’s all-season tires yield to mild understeer when turning sharply on wet pavement, but working the tail out only requires easing back on the gas when coming through corners.

Our V-8 tester’s optional Brembo brakes (14-inch front discs, versus 13.2-inchers in lesser GTs) hammered the car to a stop with a lot of forward suspension dive — a peculiar sensation because neither this car nor the softer V-6 suspension exhibited much body roll.

Ride quality remains firm but livable, with noticeably more chop in the GT. The Shelby GT500’s chassis, meanwhile, got an available Bilstein adaptive suspension this year; I hope it improves ride control over the prior Shelby’s skittish, sometimes choppy setup.

EPA gas mileage ranges from an excellent 19/31 mpg city/highway in the V-6 automatic to 15/26 mpg in the V-8 manual. The latter figure recalls many SUVs, but it’s comparable to the stick-shift V-8s in the Camaro and Challenger.

The EPA has yet to rate the Shelby GT500. Here’s how the drivetrains stack up:

The Inside
Cabin inconsistencies still mar the interior, where Ford has dressed the dashboard with premium materials but given the doors short shrift. There’s still no telescoping steering wheel, widely offered in other coupes. The optional Recaro seats, previously unavailable in V-6 and GT models, are supportive and comfortable, but they don’t have power adjustments or seat heaters, which the standard buckets offer.

An available 4.2-inch LCD screen between the gauges can come with Ford’s Racing Apps, which display everything from an accelerometer to the air-fuel mixture entering the engine. It’s entertaining, but adjusting the power-steering assist requires rooting through the LCD’s submenus, which is onerous to do on the fly. Other cars fast-track you to their sportiest settings with dashboard buttons.

The backseat is tight, but we prefer it over the borderline-unusable backseats in the Camaro and Nissan Altima coupes. Still, if you plan to haul adults around much, the Challenger and Honda Accord coupes are roomier. Trunk space is a generous 13.4 cubic feet, beating the Camaro and both Japanese cars. The Challenger trumps the group, with 16.2 cubic feet.

Safety, Features & Pricing
The Mustang’s reliability has been average. In crash tests by the Insurance Institute for Highway Safety, the Mustang coupe earned Good front- and rear-impact scores, but rated only Acceptable in side impacts. (In ascending order, IIHS grades cars Poor, Marginal, Acceptable and Good.) IIHS cited lackluster protection for backseat passengers, but the convertible version scored Good in all three tests. Neither car has undergone IIHS’ roof-crush tests. In the National Highway Traffic Safety Administration’s revamped crash tests, the Mustang coupe earned four out of five stars overall; NHTSA has yet to test the convertible.

The Mustang’s so-so ratings are cause for concern — especially in an age where the vast majority of cars earn top IIHS ratings — but there are few models with which it can be compared. Due to limited sales, most coupes aren’t crash-tested. The Challenger and coupe versions of the Accord and Altima are among them. The Camaro coupe earned five stars from NHTSA, but IIHS has yet to test it. Standard safety features include front and side-impact airbags for the front seats, but there are no side curtain airbags — a feature every major competitor has. Antilock brakes and an electronic stability system are also standard. Click here to see all safety features.

Mustang in the Market
Detroit’s muscle cars combined for nearly 200,000 sales last year, proving that sports cars still appeal even amid a shaky economic recovery. Camaro sales outpaced the Mustang, but the ‘Stang outsold everyone else. It ought to: For its performance value, the Mustang deserves admiration from kids and parents alike. The venerable Ford turns 50 next year, and the changes this year should help it meet that threshold at full steam.