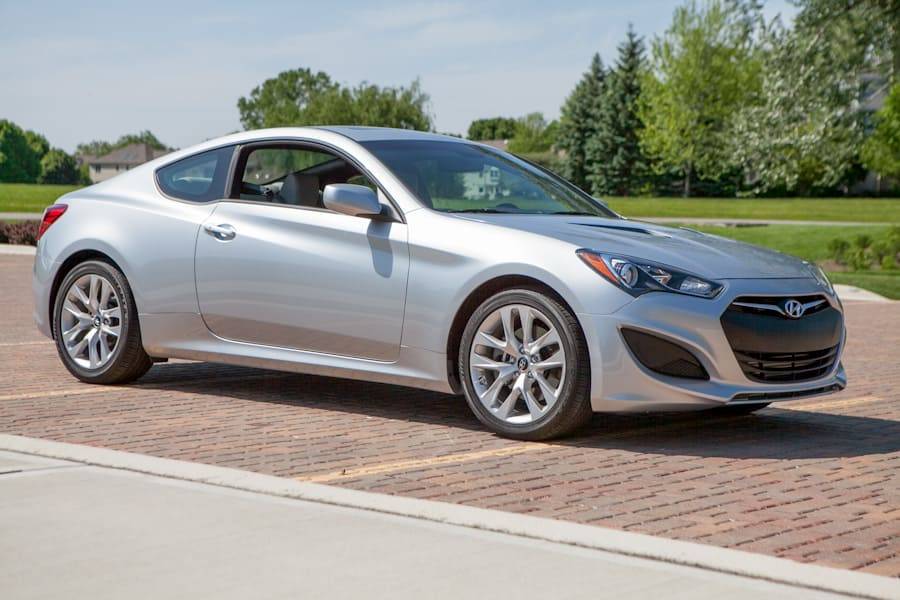 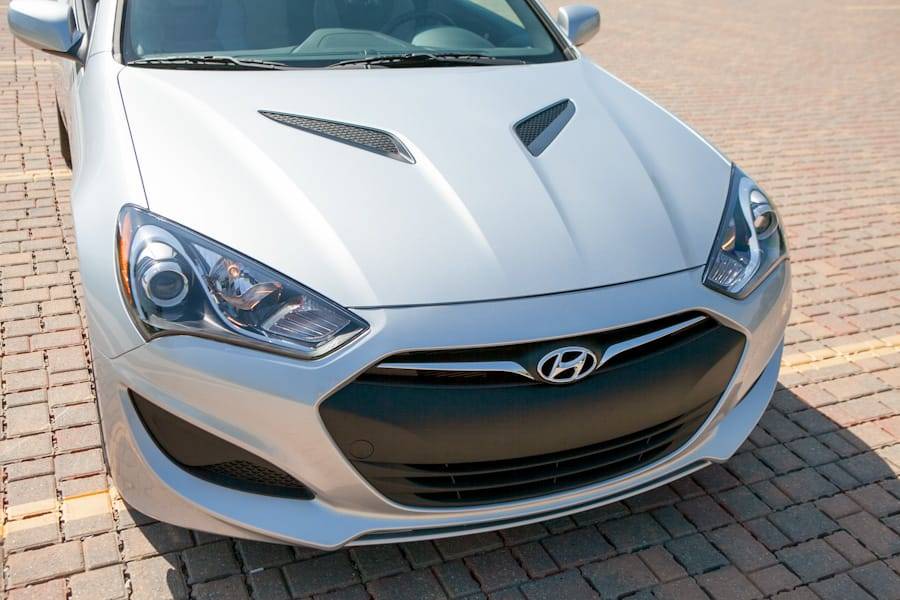 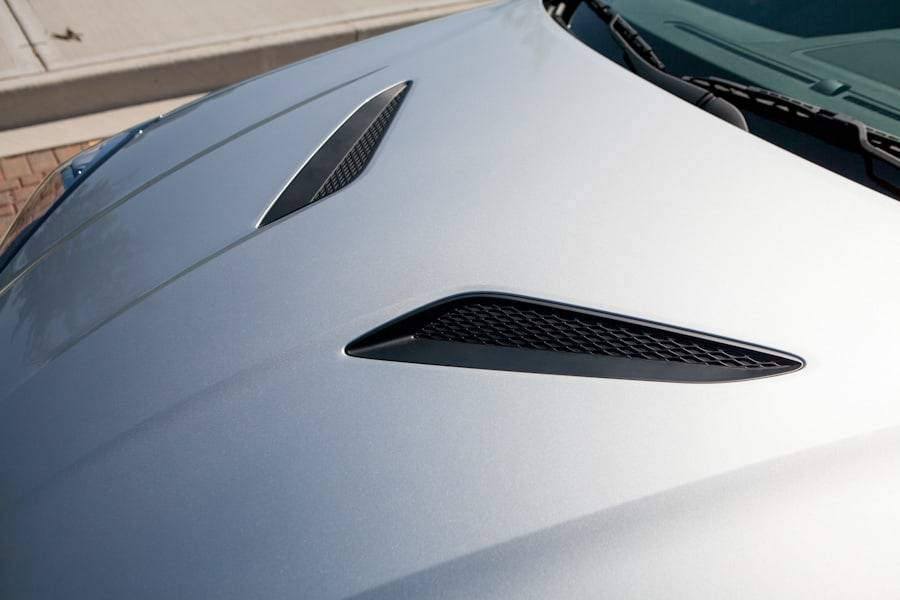 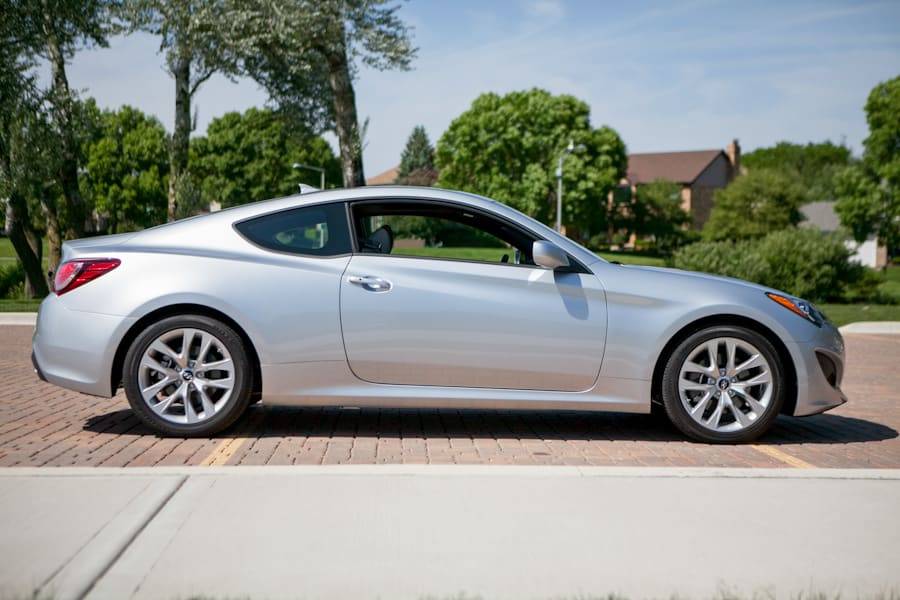 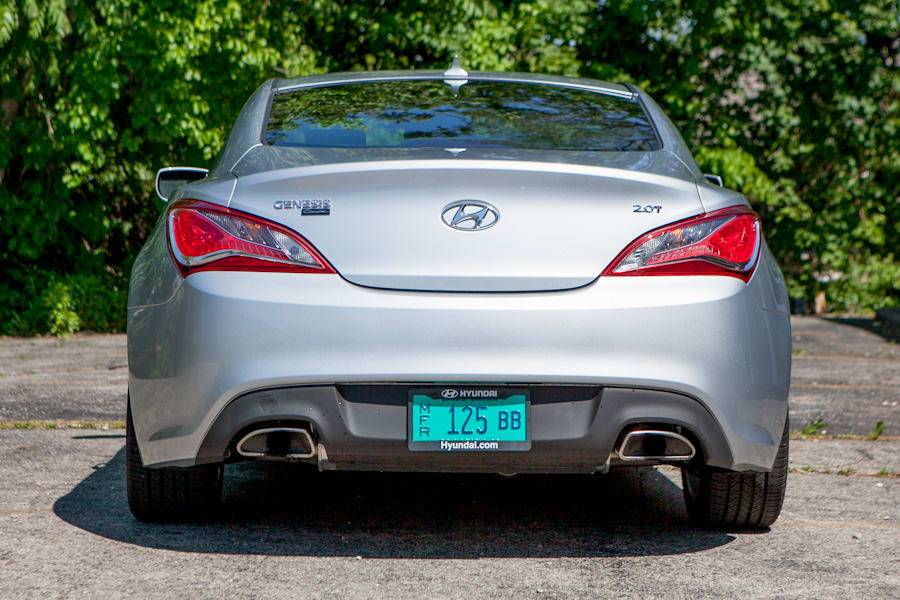 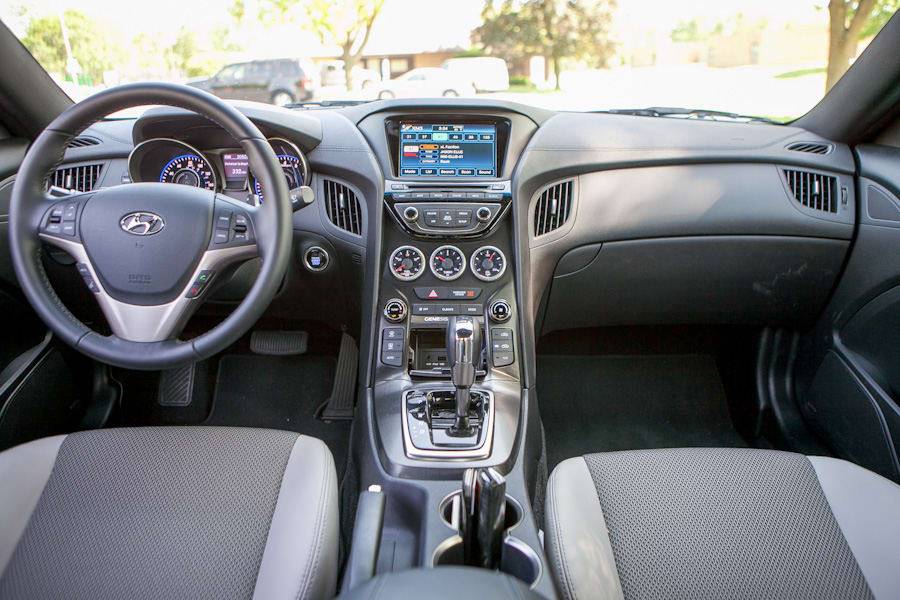 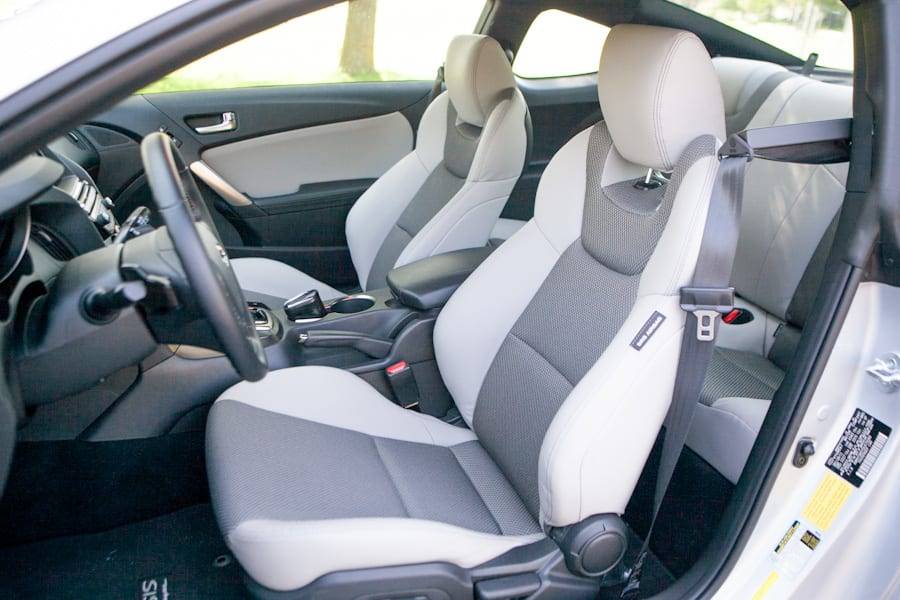 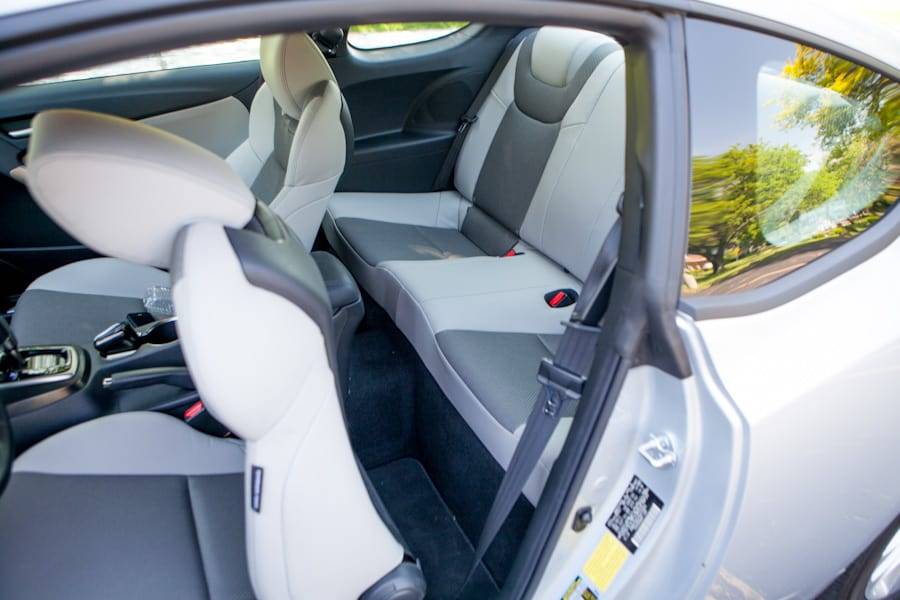 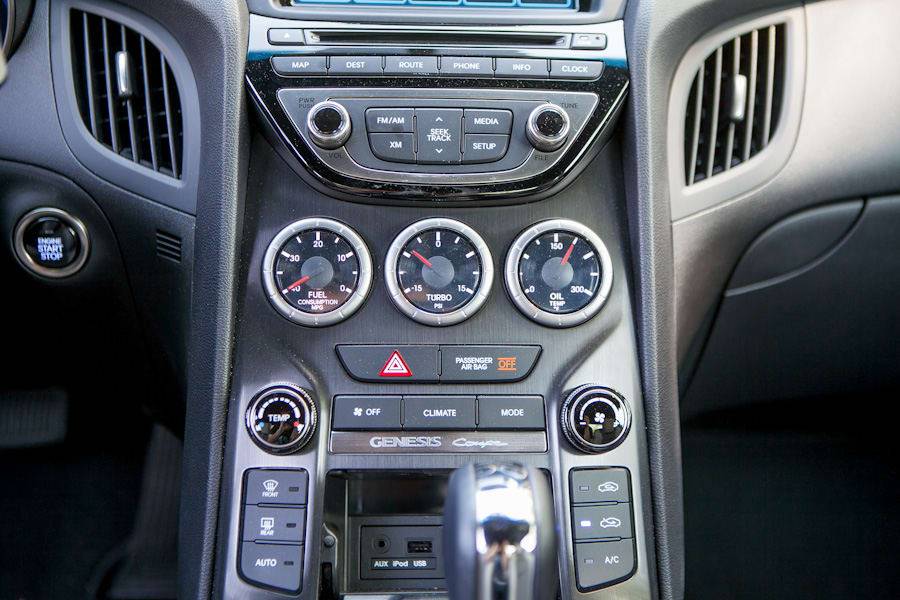 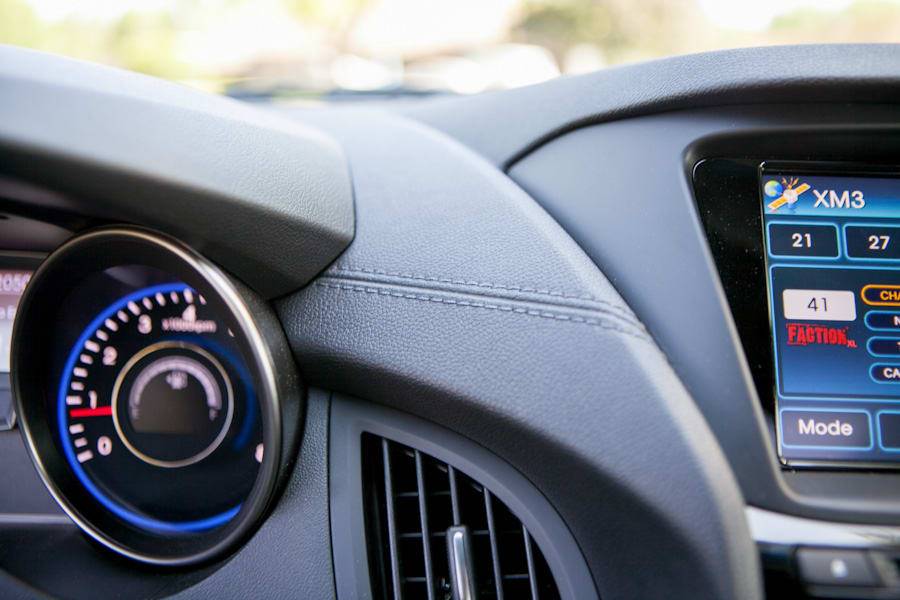 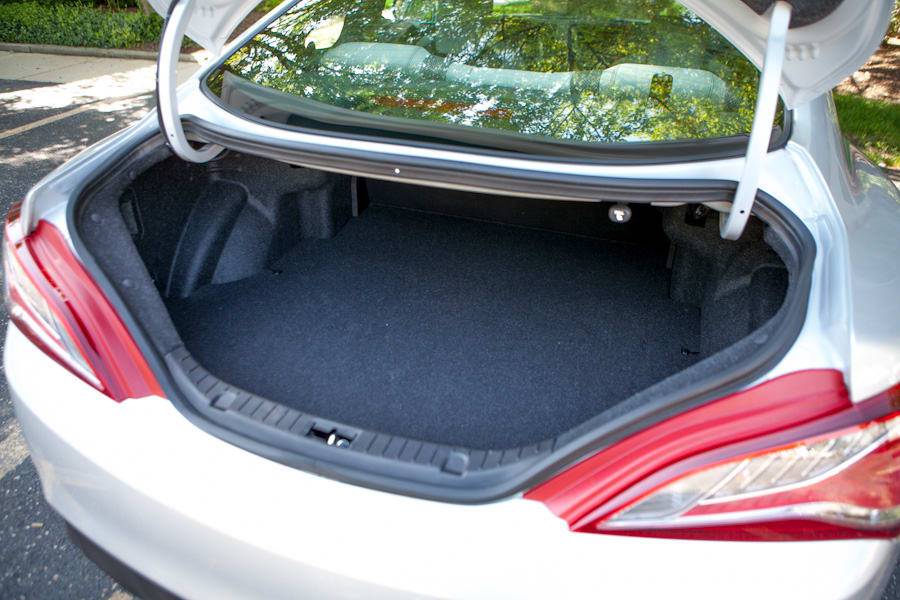 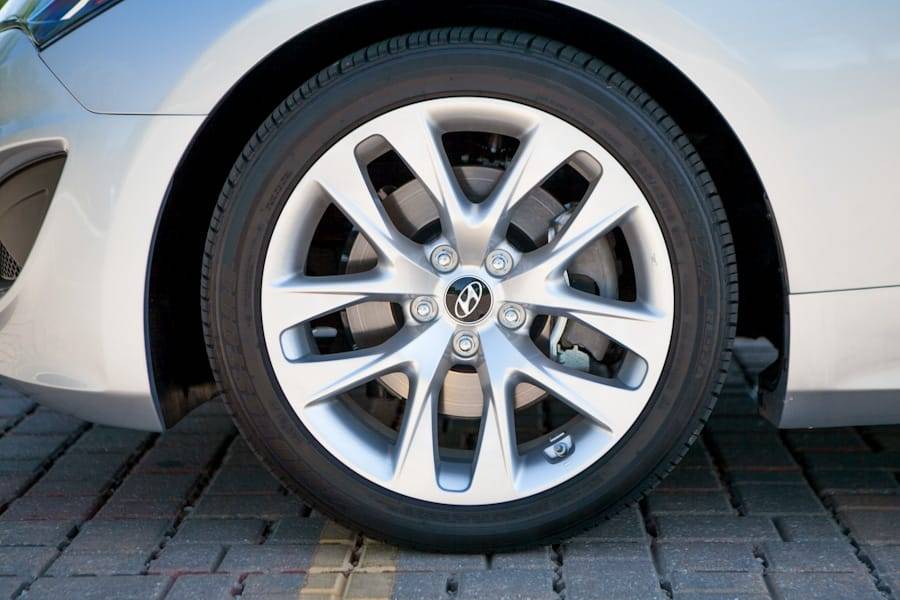 1/12
The 2013&#39;s new, aggressive front styling looks harmonious with the rest of the car, which is relatively unchanged &ndash; a feat made possible by the Genesis Coupe&#39;s already aggressive nature. | Toggle between photos using the right and left arrow keys. Cars.com photo by Joe Bruzek

In its first three model years (2010-2012), the Hyundai Genesis Coupe 2.0T was not a car I could get excited about (read my review of the 2011 2.0T R-Spec here). Its poky engine and sloppy handling made it under-deliver on its billing as an affordable, rear-wheel-drive performance coupe. Fortunately, the new 2013 version brings relief. (Please note that the Genesis Coupe shouldn’t be confused with Hyundai’s Genesis sedan, a very different luxury model covered separately.)

The redesigned 2013 Genesis 2.0T is better in a big way, with more power and a retuned suspension, though an unflattering-sounding engine hurts the otherwise-improved driving experience.

What may be even more damaging, though, is that the competition has stepped up in the form of two new rival track models — the 2013 Scion FR-S and the related 2013 Subaru BRZ — that take a better-executed approach to affordable performance.

The Genesis Coupe is available with a four- or six-cylinder engine, both of which get power increases for 2013. I drove the four-cylinder 2.0T Premium with the new eight-speed automatic transmission on regular roads and the 3.8 R-Spec with a manual transmission on a racetrack. To compare specifications between 2012 and 2013, see here.

Newfound Power, Newfound Fun
The 2013’s standard turbocharged four-cylinder engine got one heck of a power increase: 64 more horsepower. Now making 274 hp when using premium gasoline, the bump is hugely noticeable in the form of a rush of acceleration that the old engine never came close to delivering. The 2013 Hyundai Genesis Coupe offers stoplight-to-stoplight gusto that the modestly powered FR-S and BRZ can’t match. The added power for 2013 comes from a new, more-efficient turbocharger and a larger intercooler.

More power doesn’t solve all the 2.0’s problems; it’s still an unpleasant, unrefined sounding engine — a sentiment echoed by each editor who drove the coupe. I’d like to see additional insulation used to quiet the harsh engine noises. It’s so bad it’s a potential deal breaker when cross-shopping against other cheap-speed coupes. The 3.8-liter V-6, which gets 42 more horsepower for 2013 — for a total of 348 hp — is still the more refined engine option, by far.

The new four-banger squeaks out a lower 260-hp rating when running on regular gasoline. I can’t say for certain that my test car was running on regular fuel when I started driving, but the car’s performance became more consistent after filling up with premium. Before then, the engine fell flat half the time I punched the accelerator, like it was being held back by engine management and not delivering the power it should have. Once it was filled with premium, the car consistently squealed the tires and accelerated with surprising urgency.

Eight-Speed Automatic Transmission
A new eight-speed automatic transmission helps the 2.0T get an EPA-estimated 20/31 mpg city/highway, which is 1 mpg better on the highway than the previous 2.0T automatic, despite the increased power. One editor averaged 29.9 mpg in the 2013 on a highway trip of about 130 miles. The automatic-equipped FR-S and BRZ are rated 25/34 mpg with automatic transmissions, 22/30 mpg with manuals, but neither car has the Hyundai Genesis Coupe’s quick acceleration.

I’m not sold on the transmission’s operation. The eight-speed unit is always upshifting and searching for gears, like a bad movie car chase where the driver upshifts 20 times in one scene. The loud engine makes the constant upshifting and gear hunting even more noticeable and annoying. A Sport mode and paddle shifters are standard with the automatic, though I don’t think they made the driving experience any sportier. In Manual mode, the transmission automatically upshifts when approaching redline; many performance cars let the engine bounce off the rev limiter, like a real manual transmission does, if you don’t change gears.

The standard transmission is a six-speed manual with mileage ratings of 21/30 mpg. The automatic is optional on base models and can be had for an extra $1,250. It comes standard on the 2.0T Premium that I tested, which goes for $29,625, including an $875 destination charge.

Interior & Cargo
The coupe’s inside won’t be mistaken for the more luxurious Genesis sedan, but it’s an improvement over the previous interior, which felt outdated even at its introduction. A redesigned center dash and added stitching along the upper dashboard contribute to a more contemporary look. Not everyone was impressed with the accent stitching; one editor said it did a poor job imitating a real stitched-leather dashboard. The material quality of our 2.0T Premium was similar to the Scion FR-S and Subaru BRZ, but it lags behind the Ford Mustang V6 Premium trim, which uses higher-quality materials across the dashboard.

A welcome new feature is the telescoping steering wheel that adds adjustability for comfort and safety; the 2013 Mustang still doesn’t have one.

The Hyundai Genesis Coupe isn’t a people-hauler, unless the people are relatively small: The backseat couldn’t accommodate my 6-foot frame. I had to hunch over and grab my knees, as the sloping roofline provides minimal headroom. Backseat room likely isn’t a priority for sporty-coupe shoppers, but at least the Mustang and especially the Dodge Challenger have room for adults to fit in back.

The Genesis Coupe may be 15.6 inches longer than the Scion FR-S, but both cars’ backseats are similarly useless for adults. I’ll give the FR-S a pass because of its overall size, but the longer Genesis Coupe’s lack of headroom is surprising. The added size shows up in the trunk, where a wide, flat cargo area measures 10 cubic feet; the FR-S has 6.9 cubic feet. The Genesis Coupe’s cargo volume may seem small considering the Mustang’s 13.4 cubic feet, but the usable space inside the Hyundai is more than that number suggests.

Up front, three new gauges in the center dashboard display turbocharger boost (psi), fuel economy and oil temperature in 2.0T models; in the non-turbocharged 3.8-liter, the boost display is replaced by a torque readout. I like the new gauges, especially the boost gauge, which gives the cluster an aftermarket feel. Unfortunately, all the gauges are practically useless in that they’re completely out of sight while driving, located midlevel in the center dashboard instead of higher up, within easy glance.

Hyundai’s BlueLink emergency communication system is standard on the 2.0T Premium and includes voice-activated options like point-of-interest searches, texting (with a compatible phone) and turn-by-turn navigation. You can read more about BlueLink here.

Ride & Handling
One of my biggest gripes with the previous two-door Hyundai Genesis Coupe was how squirrely it handled with electronic stability control turned off, and how intrusive the stability system was when activated. It was a lose-lose situation, even with the R-Spec’s upgraded suspension. I’d gladly take the 2013 2.0T Premium I tested over the old 2.0T R-Spec, as the 2013 is more refined and predictable. The car tracks cleaner through corners, where previously the rear end would swing out.

Thankfully, the improved handling doesn’t sacrifice the Genesis Coupe’s feasibility as a daily driver. It still rides nicely over rough roads without much noise from the suspension.

It’s definitely an improvement over the previous Hyundai Genesis Coupe, but how about the natural comparison with the similarly priced FR-S? Honestly, there is no comparison. The FR-S is a sports car with handling balance and precision unmatched by any other coupe, including the Genesis Coupe. Sure, the 2.0T is faster in a straight line, but as an overall handling package, the heavier Genesis Coupe can’t compete.

I drove a 3.8 R-Spec and Subaru BRZ around the Road America racetrack, where the BRZ quickly ran out of steam on the straightaways but felt worlds more composed than the Hyundai when braking and cornering. Still, the 2013 Genesis Coupe is an improvement over the previous model year, and stability control doesn’t cut into the driving experience like the old version did around the same track.

Exterior
The front got the most attention for 2013, with a similar face as you’ll find on other Hyundai cars. The new look, with wide-mouth front styling, is welcome; the original coupe’s styling was already growing old after only a few model years. Compared with the 2012, the 2013’s front styling, with LED running lamps, is vastly different and took a few days to grow on me. The whole car now looks freshened, even though all that’s changed is the front styling and the addition of a few highlights, including heat extractor “cues” on the hood — meaning they’re non-functional. They do look good, however.

Hyundai Genesis Coupe in the Market
There’s no questioning the 2013 Hyundai Genesis Coupe 2.0T is an improvement over the 2012. At $25,125, including destination, it’s $2,000 more than the outgoing 2012 model. It’s a nice coupe with more bang for your buck versus the outgoing model, but it’s not a great coupe because of that pesky engine’s raucousness — also because the FR-S and BRZ are more dedicated sports cars at the same price. Unfortunately, the more-refined V-6 trim level is a big price jump, going for $29,625 for a stripped R-Spec model or $32,875 for the next step up, the Grand Touring.