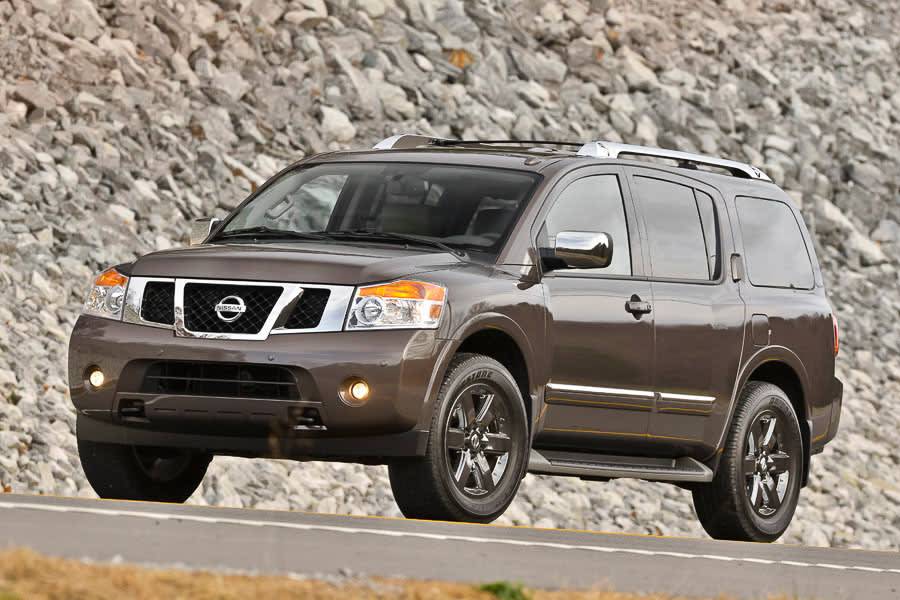 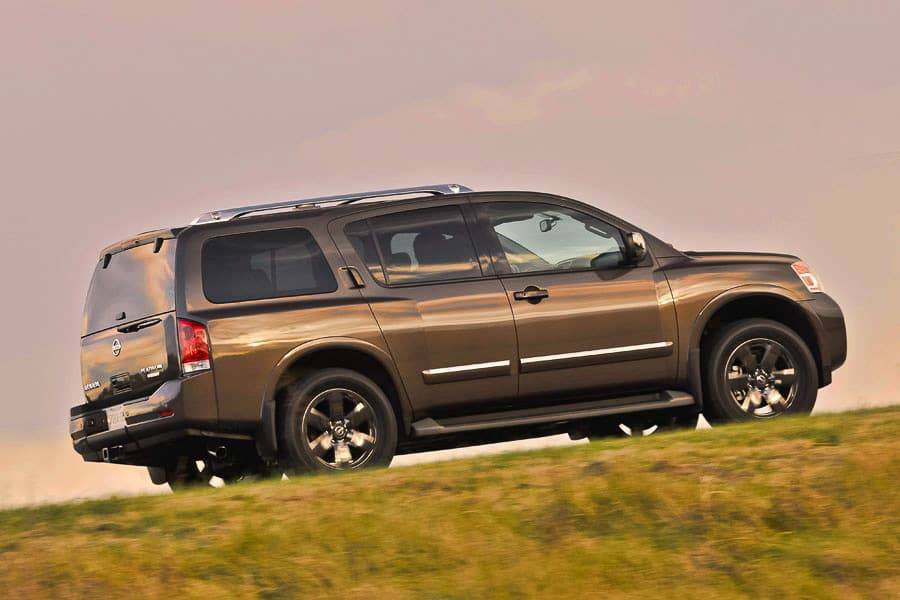 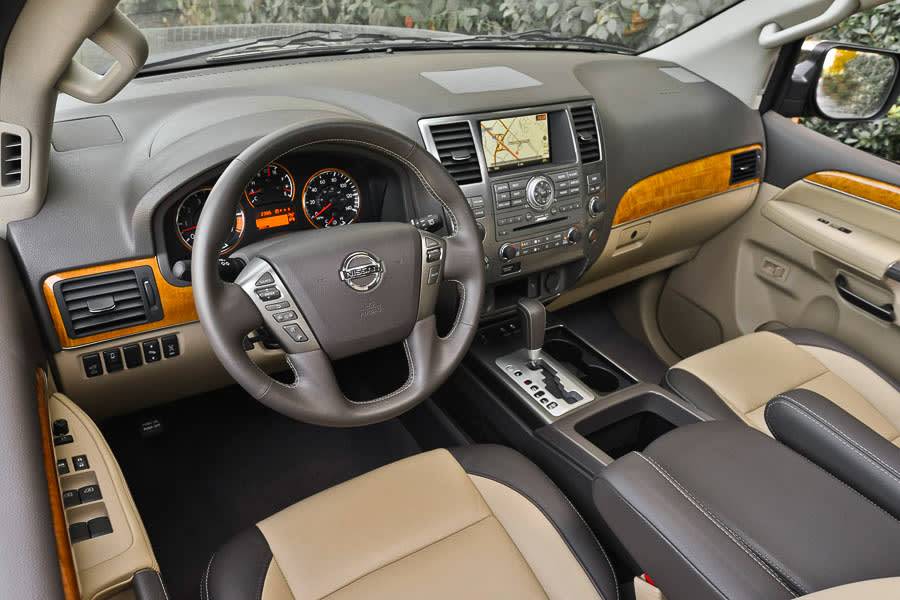 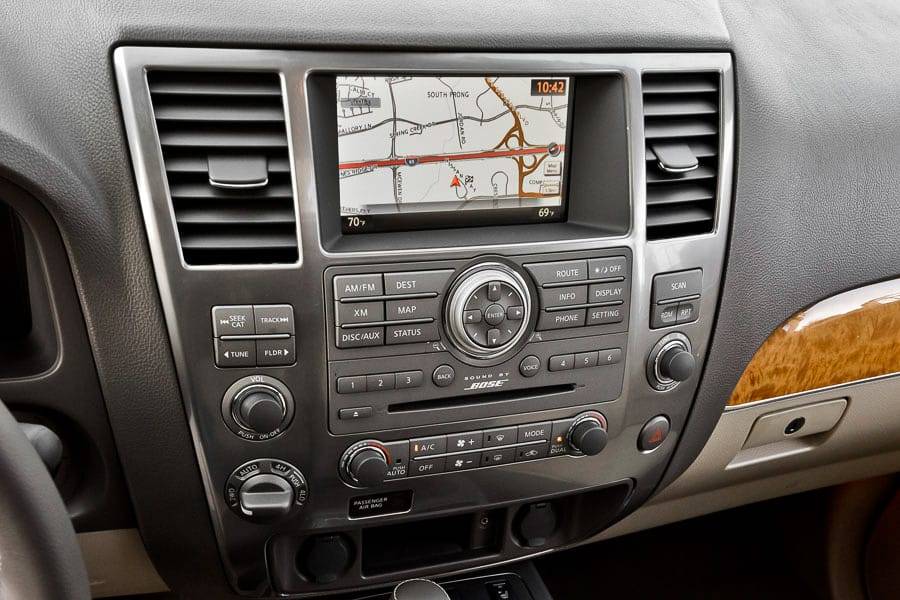 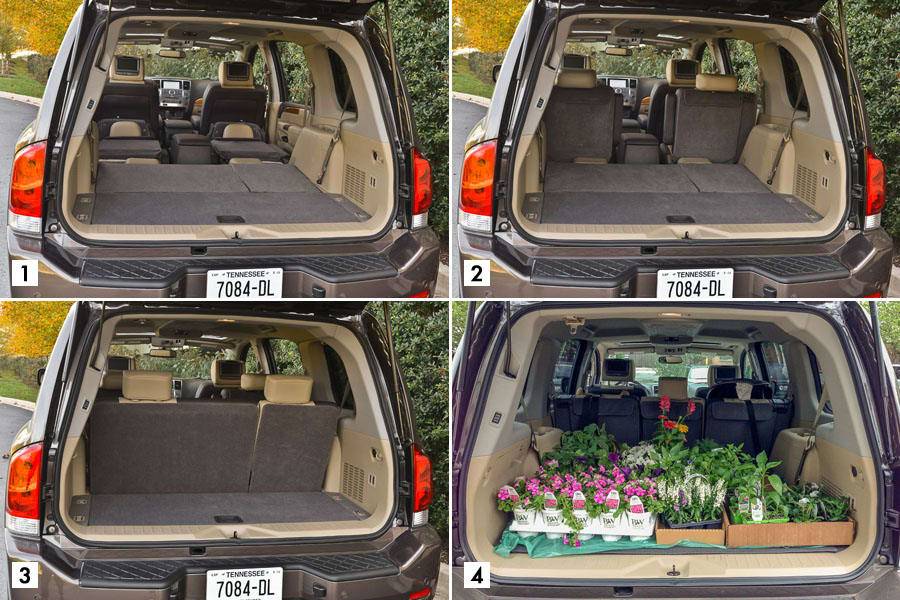 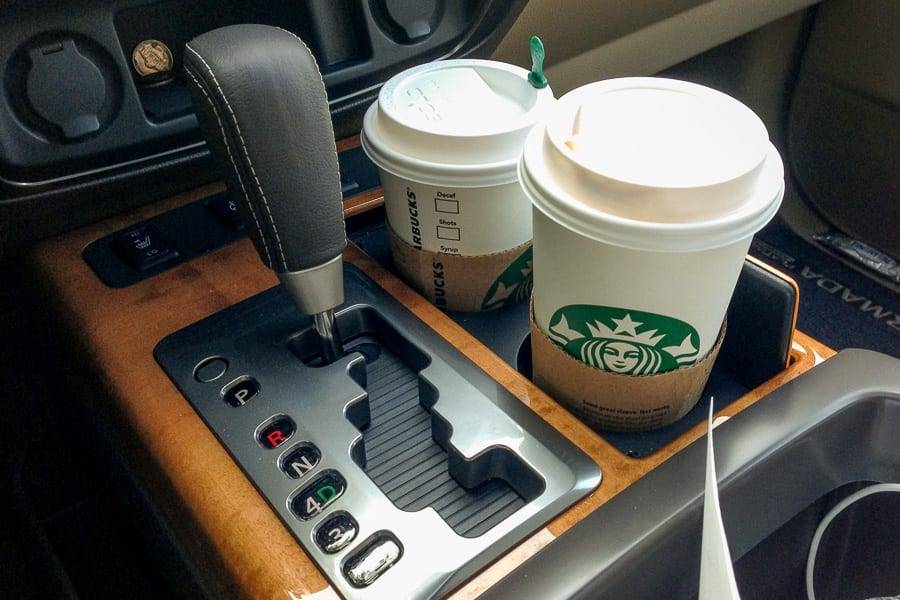 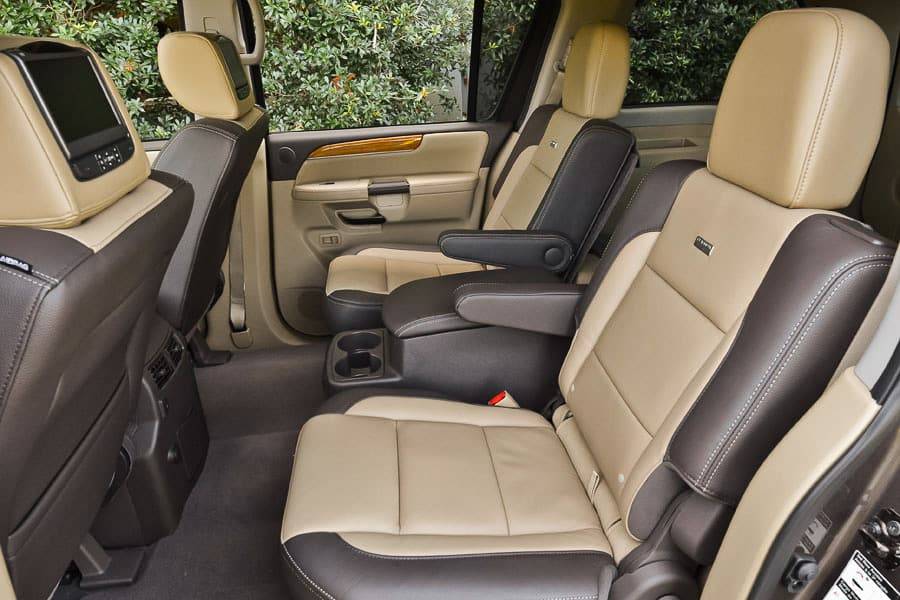 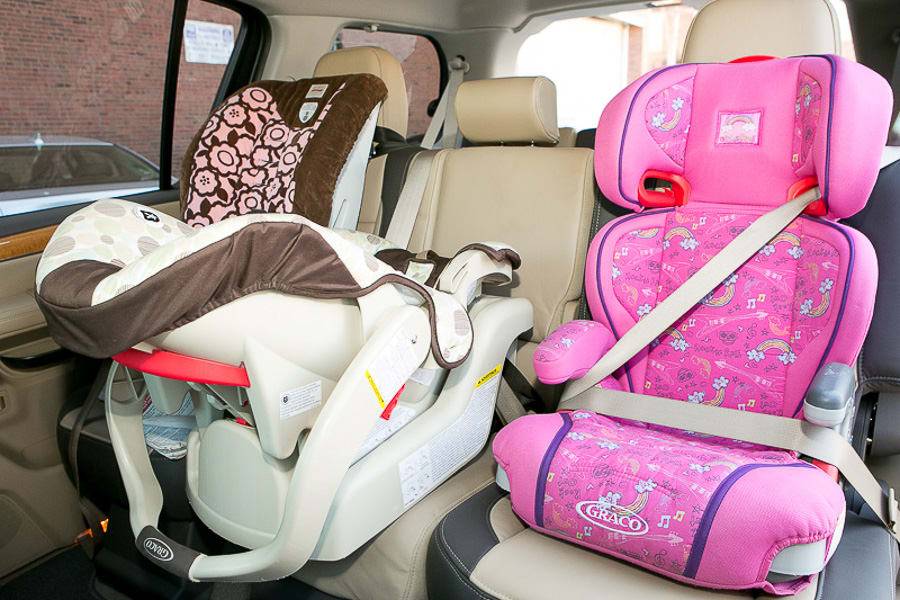 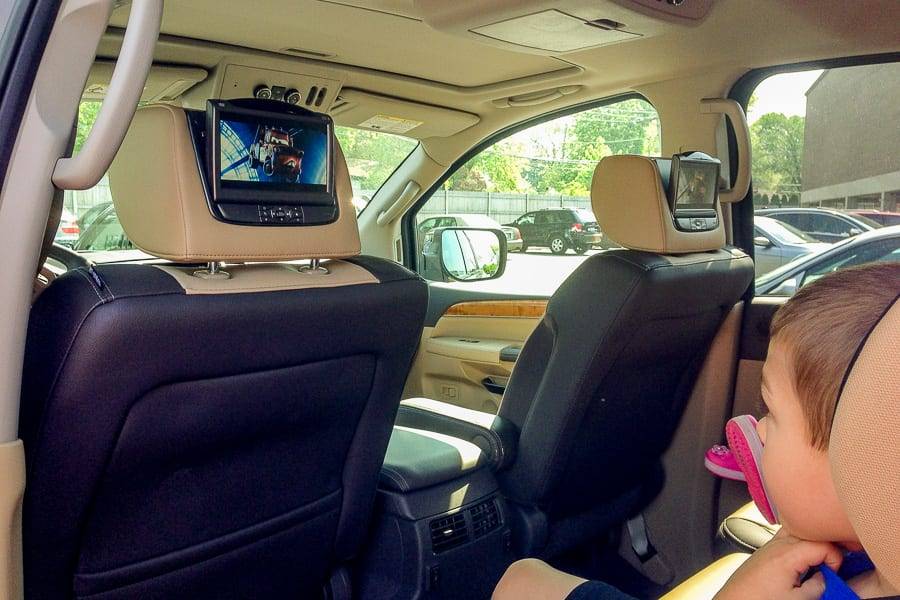 1/9
In terms of styling, the Armada is as prototypically SUV as they come, with a chiseled design that has held up well over the years. | Toggle between photos using the right and left arrow keys. Manufacturer photo

Some may think the era of the gigantic, gas-guzzling SUV is over, but I found Nissan’s aging eight-seat Armada to be exceptionally practical, spacious and comfortable.

It not only won me over; a surprising number of people who came into contact with it gushed over the behemoth in my driveway.

Performance
Most manufacturers have dropped their lumbering SUVs for more efficient three-row crossovers. Those vehicles — like Nissan’s own redesigned Pathfinder — generally have smaller engines, less interior room and less bulk overall for better fuel economy and a more car-like ride.

The Armada, though, is pure SUV. That means its truck-derived frame delivers a bouncier ride over rough pavement, and the optional 20-inch wheels and tires produce quite a bit of noise as well.

Power comes from a standard 317-horsepower V-8 engine. That sounds like a lot, but because it needs to propel 5,372 pounds, the Armada is no rocket ship; it’s more like a cruise ship. It’s also 358 pounds slighter than a Toyota Sequoia and 95 pounds lighter than a Chevy Tahoe, both of which feature more power: 381 hp and 320 hp, respectively. You can compare the three here.

And, of course, none of these SUVs is what anyone would classify as fuel-efficient. Rated at 13/19/15 mpg city/highway/combined, the Armada sits between the Sequoia, at 13/18/15 mpg, and the Tahoe, at 15/21/17 mpg for 4×2 models (see the ratings). Mileage typically drops when equipped with four-wheel drive. The four-wheel-drive Armada is rated 12/18/14 mpg and the Sequoia 13/17/14 mpg, but, surprisingly, the Tahoe’s rating is the same even with four-wheel drive (see the ratings).

During my test in mostly suburban and congested highway driving, the 4×4 Armada never broke 12 mpg in nearly perfect weather conditions requiring little air conditioning. I tested the 2012 Chevy Tahoe 4×4 in a previous review and had nearly the same results, never breaking 13 mpg.

The Armada’s ride feels somewhat isolated from the road, as is the driver, perched high above the road. The suspension does a good job staying settled on smooth pavement and rough highway surfaces alike. It’s when you hit bumps that the suspension has you pitching a bit; an average crossover would absorb the same hits with a sharp jolt, instead. I preferred the Armada’s pitching to the jolts. However, some three-row crossovers, like the Toyota Highlander and the Pathfinder, deliver a ride that’s generally free of the jolts, as well.

Steering was a bit heavy, as you might expect, but most soccer moms and dads likely won’t mind it over the long haul. What might be a problem is visibility. While seeing other cars on the road is a strong point, thanks to the Armada’s tall greenhouse with large windows, the SUV’s height makes it hard to see your surroundings in parking situations.

An available backup camera doesn’t do you much good when the front of the Armada comes up to a grown man’s chest. How do you expect to see things like parking cones, mailboxes, pets or children with such limited immediate visibility? One of our editors expressed concern about driving the Armada around her children.

Towing is one reason a car shopper would lean toward a traditional SUV versus a crossover. The 4×2 Armada is rated to tow 8,200 pounds, and the 4×4 pulls 6,500. With an optional towing package on the 4×4 model, that number climbs to 9,000 pounds. The Sequoia is rated at 7,400 pounds and the Tahoe at 8,500 pounds. The Pathfinder is among the more capable crossovers on the market, with a maximum tow rating of 5,000 pounds with an optional tow package. That’s the same as the Toyota Highlander with a V-6 engine.

That makes the choice between SUV and crossover pretty easy if you’re a boater or a hauler of significantly sized trailers.

Practicality
The interior is definitely outdated. From the simple gauge cluster to the clunky buttons and controls adorning every surface, you can tell the Armada hasn’t gotten much attention from Nissan’s design team in many years. Still, get past the aesthetics and you’ll find yourself riding high in ample comfort.

In the driver’s seat, I felt like I could go on a yearlong Big Mac binge before I would test its width completely. I drove the Armada for hours and felt nary a glimmer of back pain. The rest of the cabin was equally comfortable for all my passengers, from my choosy wife to my young children. The kids rode in child-safety seats on the second-row bench (captain’s chairs are optional), and both my 4- and 5-year-old were able to easily climb up the running board, into the cabin and up into their own seats. See the Car Seat Check for details.

The bench is so wide that my wife was able to sit in the middle seat without rubbing against either child seat. That’s a lot of room. The Armada is one of a few vehicles on the market that can accommodate three child seats across the backseat. The specs bear it out, too: Second-row hip room is 60.8 inches, besting the Tahoe at 60.6, Sequoia at 59.9 and Pathfinder at 56.1 inches. Second-row headroom and legroom are also in the Armada’s favor, and the third-row numbers fall between the three.

One of the few areas — besides mileage — the Armada proved not to be practical revealed itself when I was loading the cargo area. I did a run to the local garden center to pick up plants for our summer vegetable garden and flowers for the yard. The cargo area expands from 20 cubic feet with the third row in place to 56.7 cubic feet with it down. The Sequoia is rated at 18.9 cubic feet and 66.6 cubic feet in both scenarios, while the Tahoe’s numbers are 16.9 cubic feet and 60.3 cubic feet, respectively.

The Armada’s cargo area swallowed all the plants perfectly, allowing everything to fit flat on the floor. However, the cargo floor is about as high as my gut, making loading and unloading items to the front of the compartment a chore that often required getting halfway in myself.

Price is also rather practical, comparatively. The base Armada 4×2 starts at $37,885 including the destination charge, which is thousands less than the Sequoia and Tahoe base models, at $43,450 and $41,400, respectively. The price differences are similar between better-equipped trims of all the models.

My test car was the top-of-the-line Platinum Reserve trim level with a sticker price of $59,265. It came with everything from dual screens in the front head restraints for the kids to 20-inch dark chrome wheels that even had my neighbor declaring the Armada “stunning.”

Safety
The Armada is equipped with six standard airbags. Neither the Insurance Institute for Highway Safety nor the National Highway Traffic Safety Administration has conducted crash tests on the SUV. NHTSA gives it a three-star rollover rating, which is not uncommon for full-size truck-based SUVs, though the Sequoia and Ford Expedition are rated with four stars, as are most crossovers.

Armada in the Market
Yes, it’s a behemoth SUV that gets horrible gas mileage. But if you can afford the fill-ups, the Armada is as good a choice as there is for families who tow. Plus, healthy incentives and discounts at the dealership are a common benefit of shopping for a dinosaur.