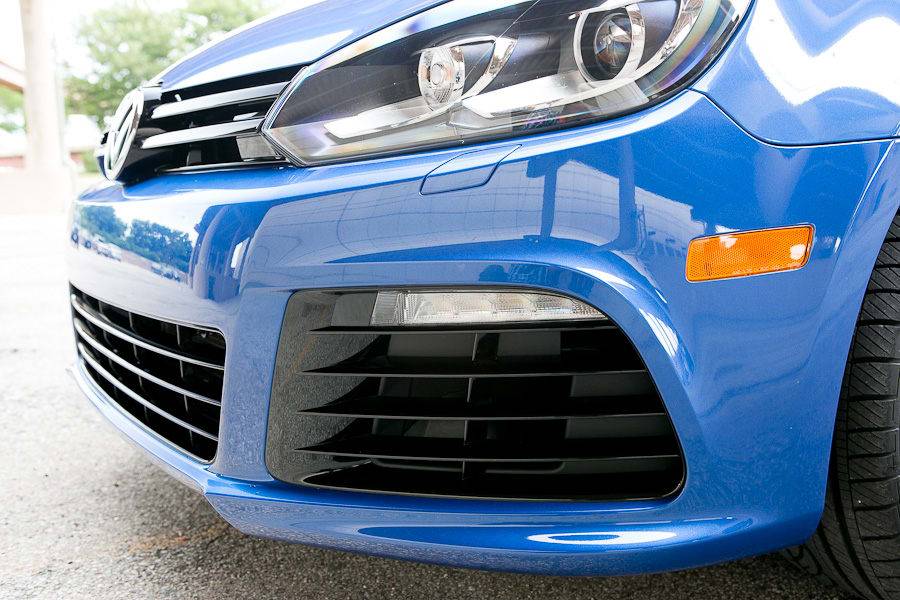 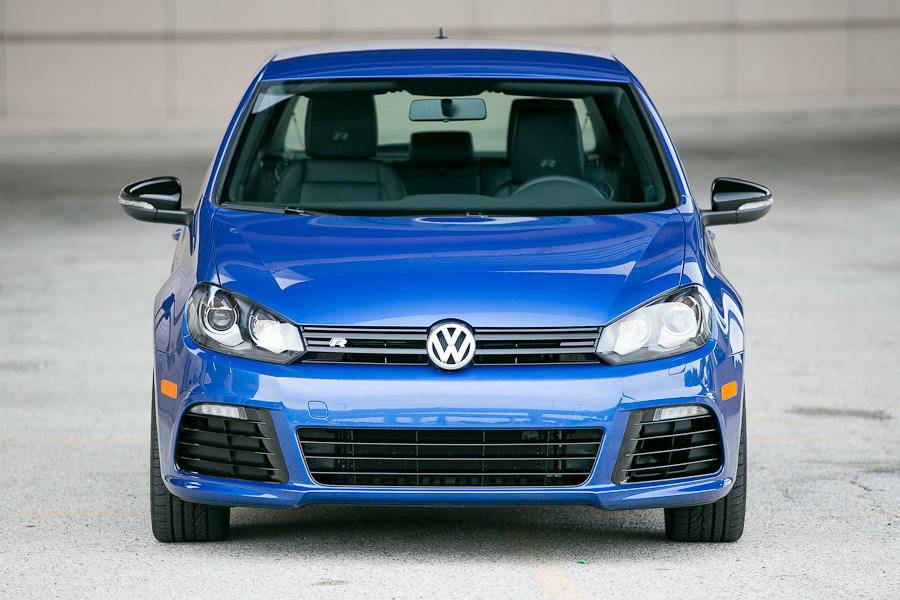 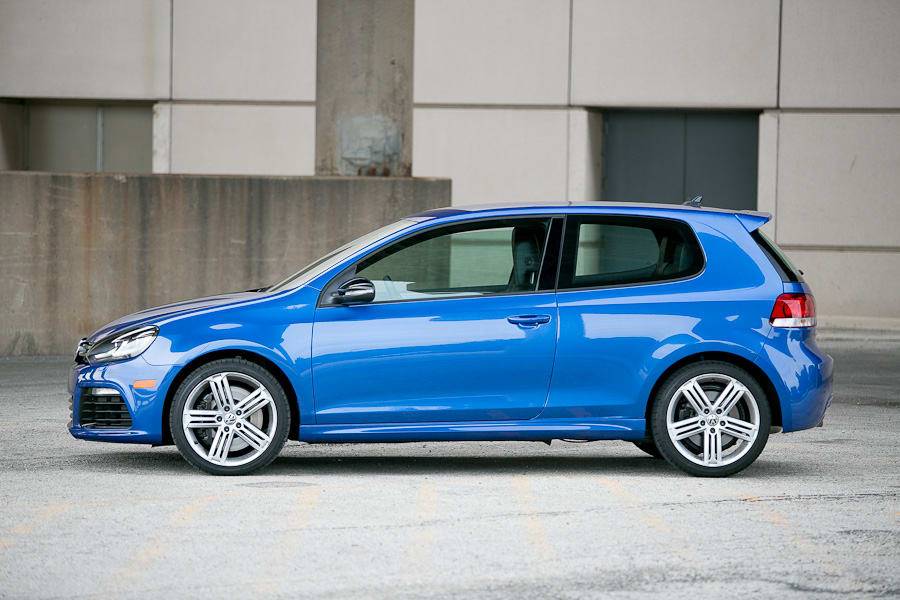 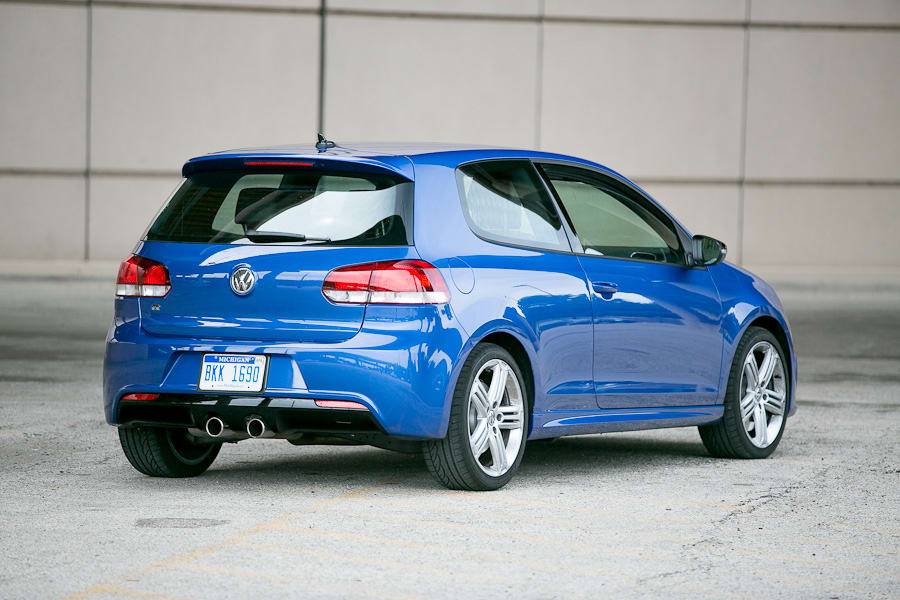 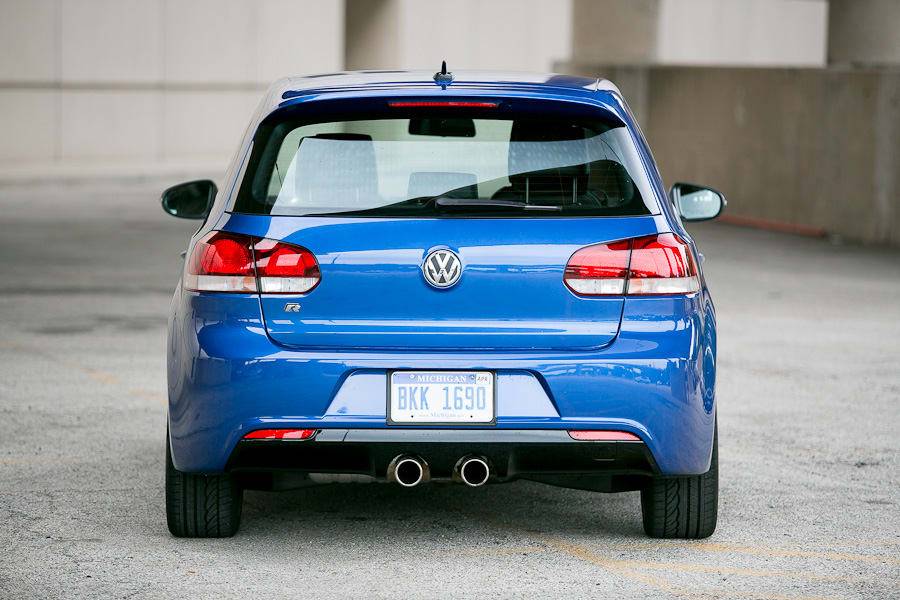 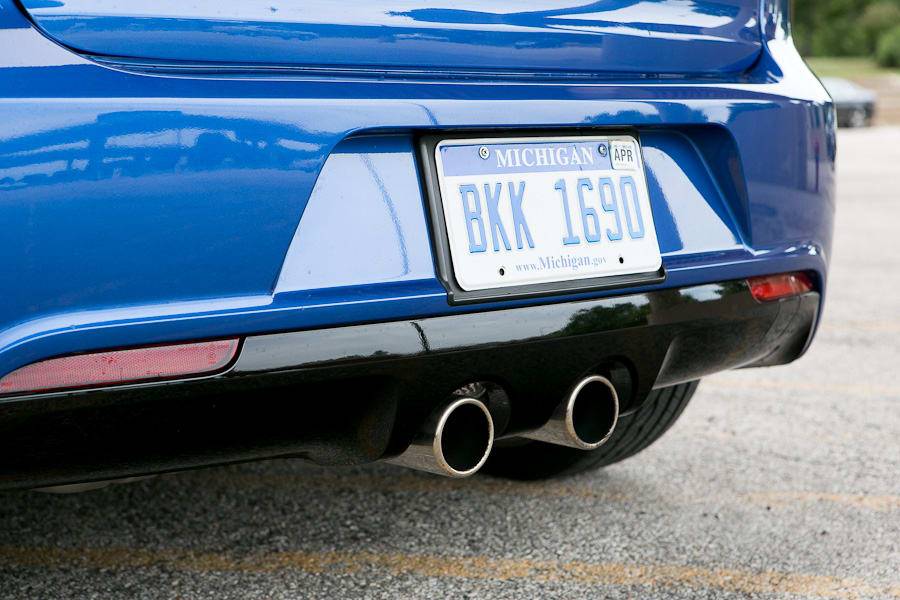 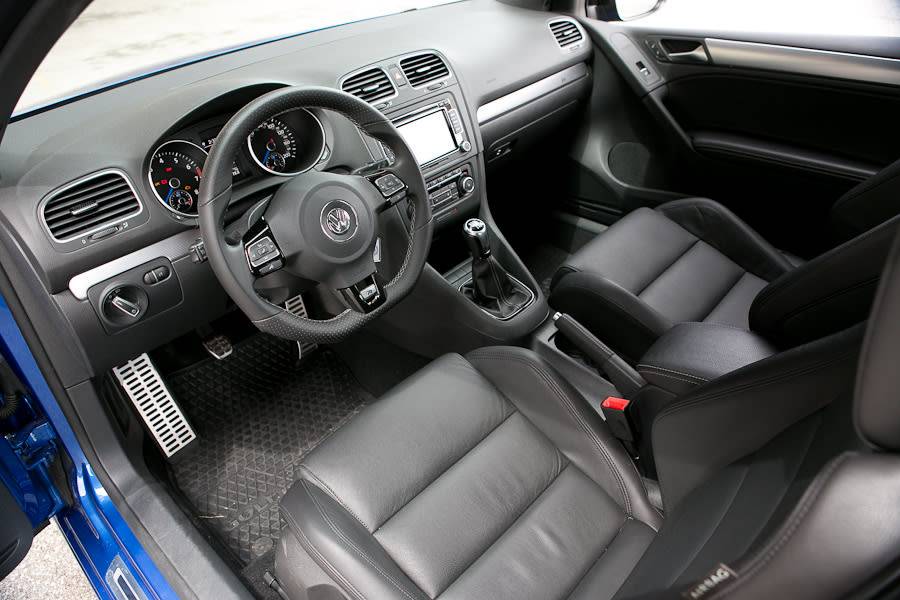 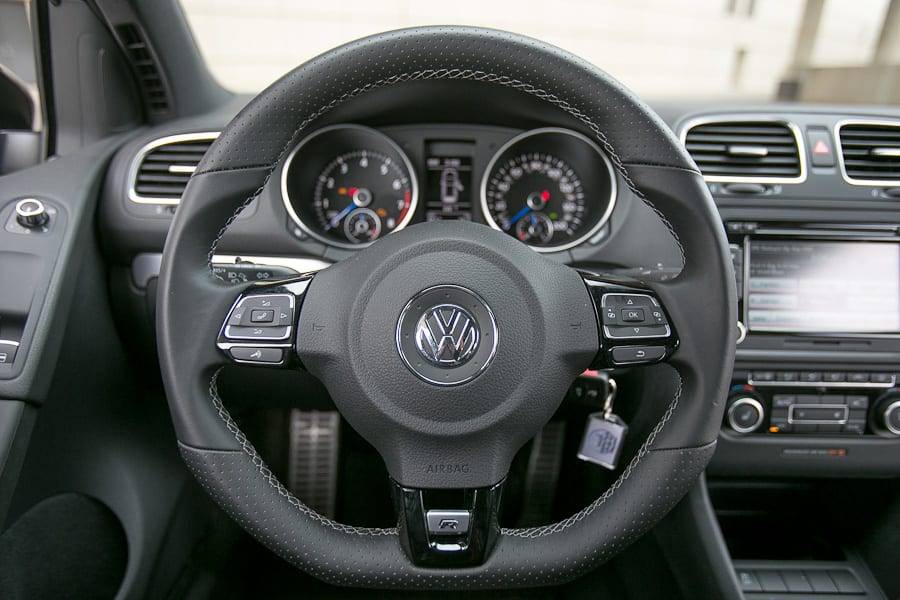 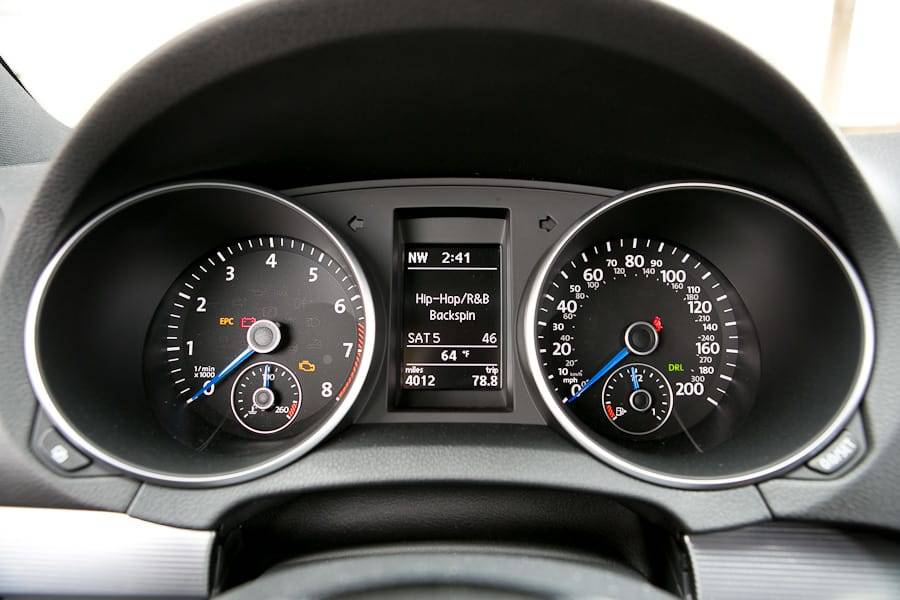 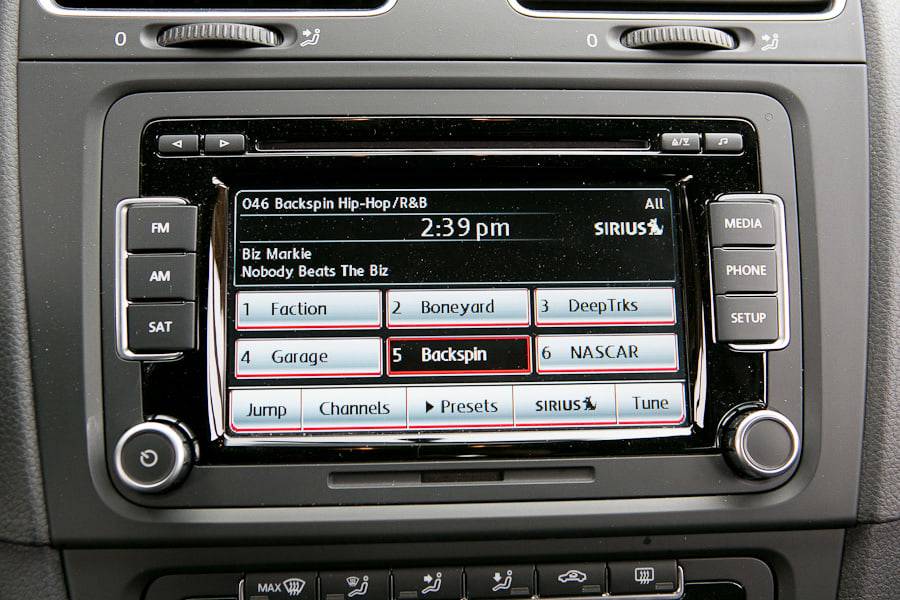 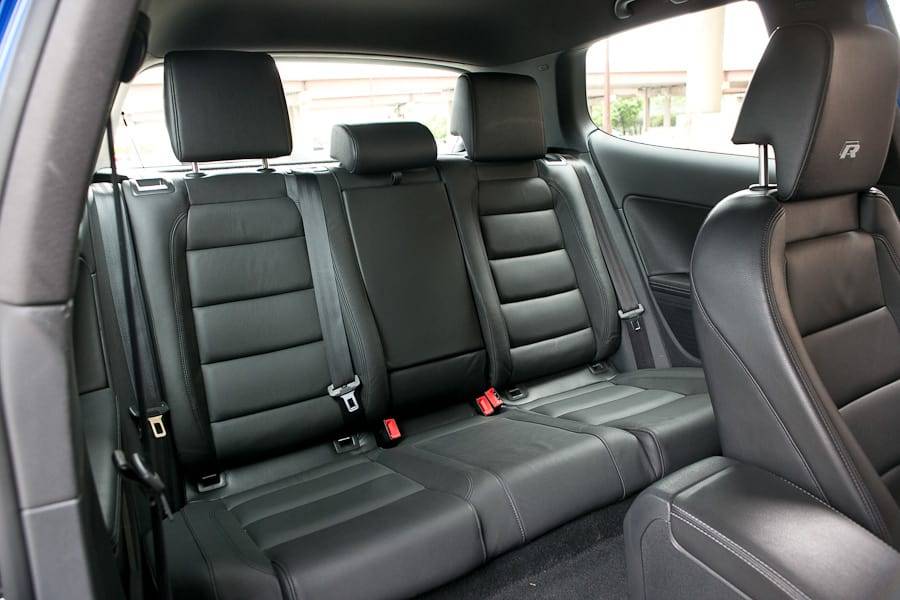 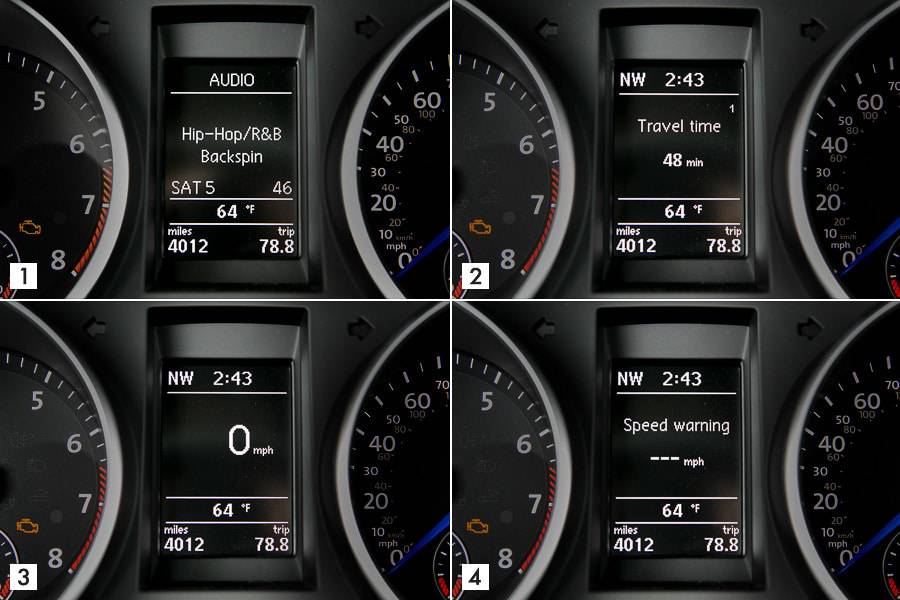 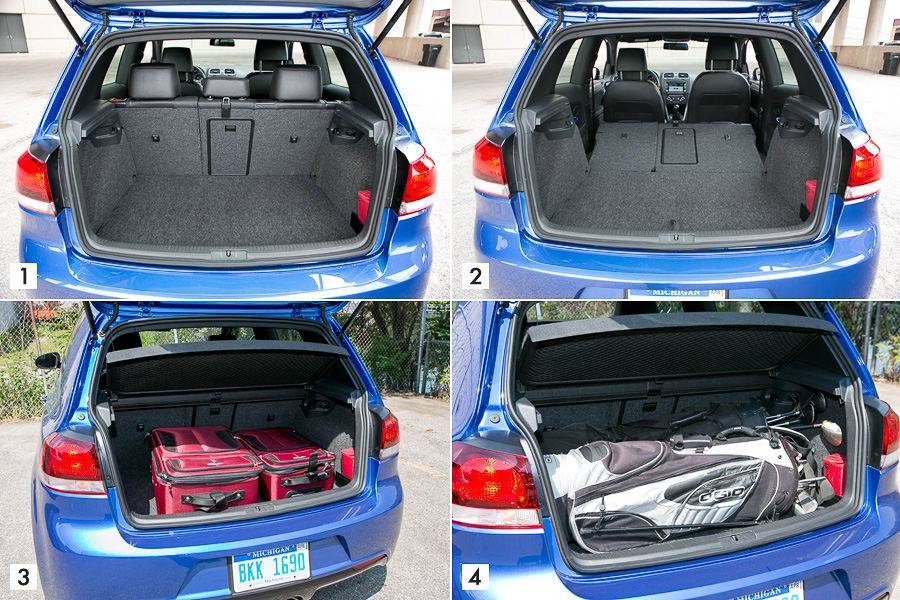 1/13
The Golf R looks different from a standard Golf or GTI, but only slightly. It is an understated look compared with other go-fast competitors. | Toggle between photos using the right and left arrow keys. Cars.com photo by Evan Sears

Editor’s note: This review was written in July 2012 about the 2012 Volkswagen Golf R. Little of substance has changed with this year’s model. To see what’s new for 2013, click here, or check out a side-by-side comparison of the two model years.

Today, you can find a 500-horsepower muscle car for around $50,000, or you can opt for something sporty and inexpensive, like Subaru’s new BR-Z. Cars like the new Golf R from Volkswagen fall somewhere in between.

The 2012 Volkswagen Golf R certainly packs performance, but I’m not sure if the packaging or price make much sense outside a very small niche of shoppers.

Performance
At its core, this is still a VW Golf. The R is available as a two- or four-door hatchback, and so is VW’s popular GTI. The biggest difference, though, is that the R is the only Golf with all-wheel drive.

Performance
Equipped with all-wheel drive, the Golf R should offer better grip, handling and overall sense of command than the GTI, but some of our editors thought Volkswagen didn’t execute this car’s all-wheel-drive as well as it could have. While current all-wheel-drive systems from Audi — Volkswagen’s luxury division — bias 80 percent of torque to the rear wheels, the Golf R splits it 50/50.

That means that when you power out of corners, you don’t get a balanced feel that’s similar to a rear-wheel-drive car, which Audis provide.

Unlike the Evolution, STI and the last super-performance Golf (the 2008 R32), this Golf R feels lighter on its feet. It’s more than 200 pounds lighter than the R32, and that contributes to drivers having a better time behind the wheel.

I thought the tachometer’s 6,500 rpm redline was a bit deceiving, as the R seemed to hit the rev limiter before that point, forcing a shift.

The steering is lightning-quick, with a well-weighted wheel — not too heavy, not too light — and the springy clutch pedal was a joy to drive even in heavy traffic. I broke up my testing of the Golf R with a night in Chevy’s Camaro ZL1, a 580-hp, $50,000-plus muscle car, and there was no question which one delivered the more thrilling, fun-to-drive experience. Yes, I’m talking about the Golf. You’d likely get fewer traffic tickets in the VW, too.

Driving solo, I found the ride to be above average for this type of high-functioning sportster, but the firm suspension, combined with our two-door test car’s short wheelbase, didn’t appeal to my family. On a 20-mile trip to visit friends, my daughter nearly got carsick in the backseat. On the way home, my son complained of “tummy pains” too. My wife thought it was fine other than over a pitted concrete section of freeway where the jolts we felt through the suspension were nonstop and road noise was excessive.

Interior & Cargo
It bears repeating that this is a VW Golf, and almost all interior dimensions are identical to the two- or four-door versions of the sedate compact hatch your little sister drives.

That isn’t exactly bad for Golf R buyers, as they’re treated to a rather upscale cabin with rich leather trim and thick front seats with beefy bolsters and tons of support. You can even bring along three passengers in relative comfort.

It’s certainly a more sophisticated interior than the models most likely to be cross-shopped: the aging Evolution and the soon-to-be-redesigned WRX STI. Both of those rally-inspired machines have similar interiors as their other versions that sell for half the price, and it shows in the standard cloth seats and beyond.

The Golf R offers more backseat space than the other two, but the edge in cargo goes to the STI’s hatchback version, at 19 cubic feet, versus the Golf R, at 14.8 cubic feet for the four-door hatch.

Safety
The four-door versions of both the regular Golf and GTI are Top Safety Picks by the Insurance Institute for Highway Safety, but the organization hasn’t determined yet if those results apply to the all-wheel-drive equipped Golf R.

To see how well car seats fit, click here. You can see all the Golf R’s standard safety features here.

Golf R in the Market
The Golf R is priced within hundreds of dollars of Subaru’s and Mitsubishi’s fastest products and offers a better interior and classier styling. But it doesn’t have the all-out performance chops of either of its Japanese competitors.

It’s a blast to drive, but to want it you’ll need to be a driver who craves this very specific package.