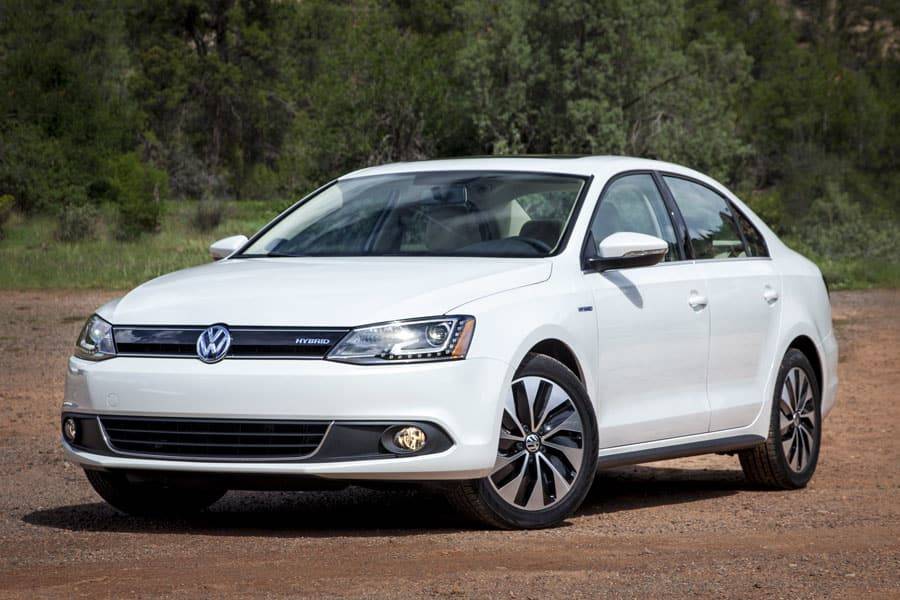 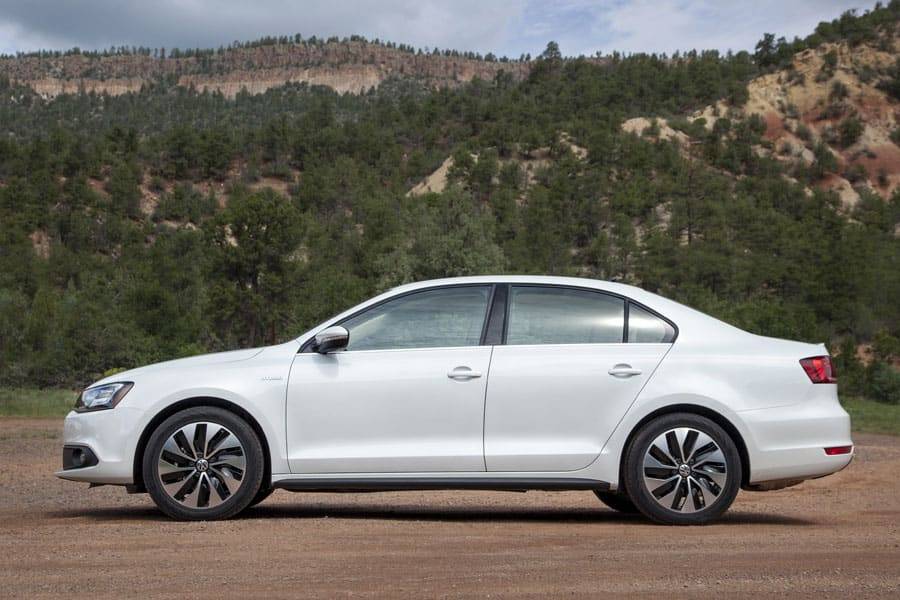 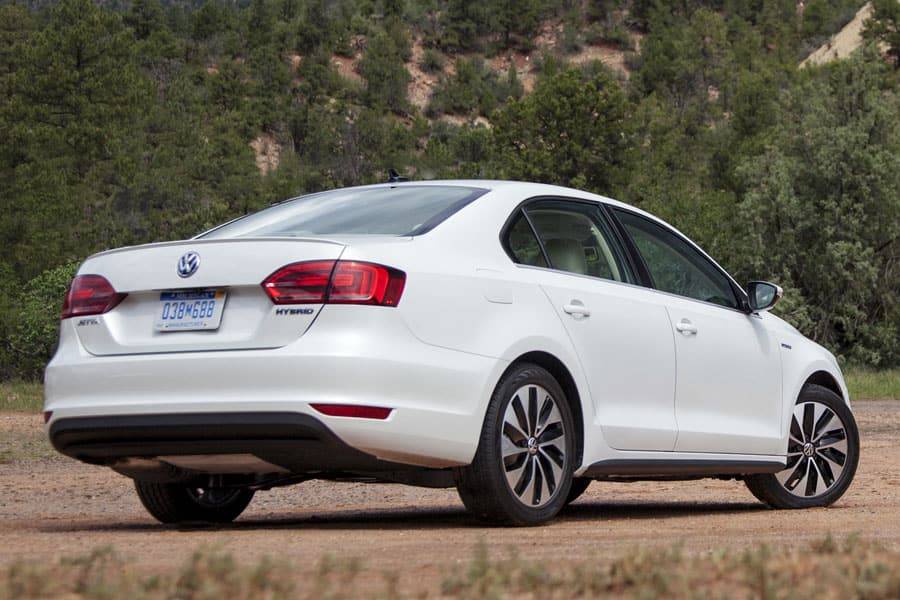 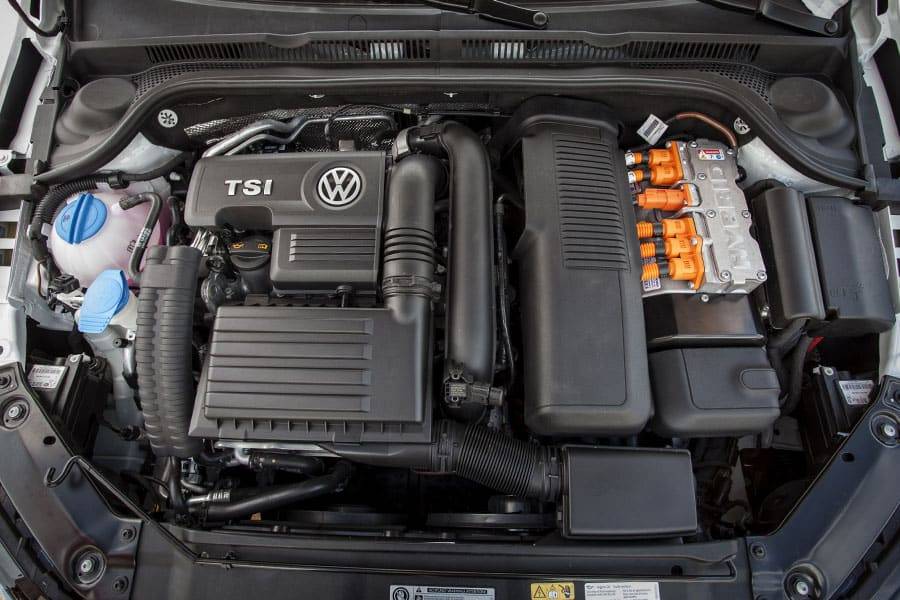 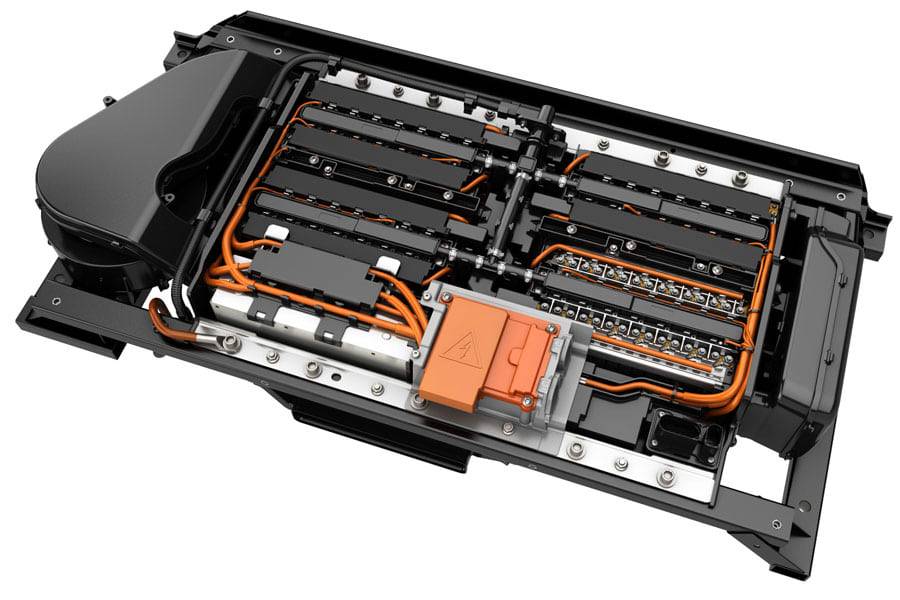 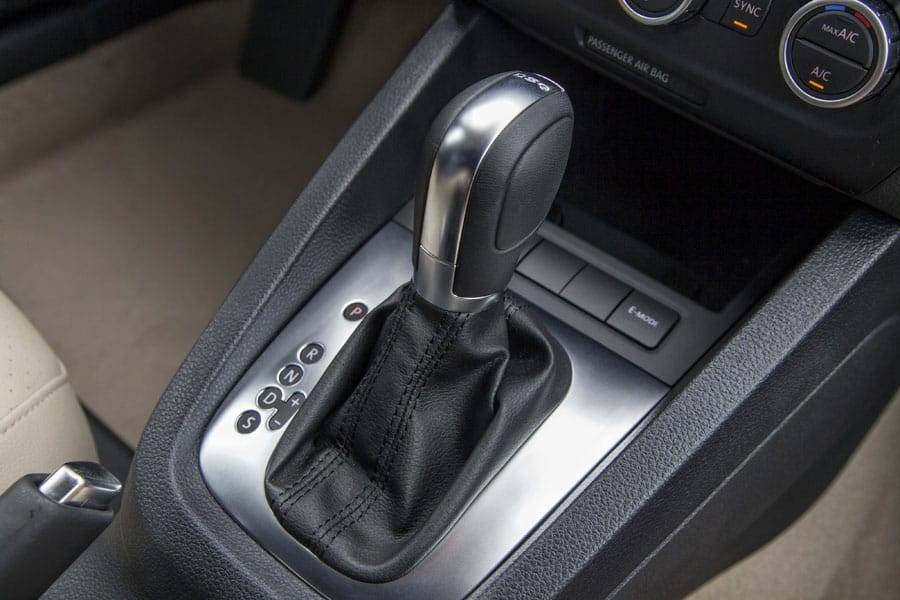 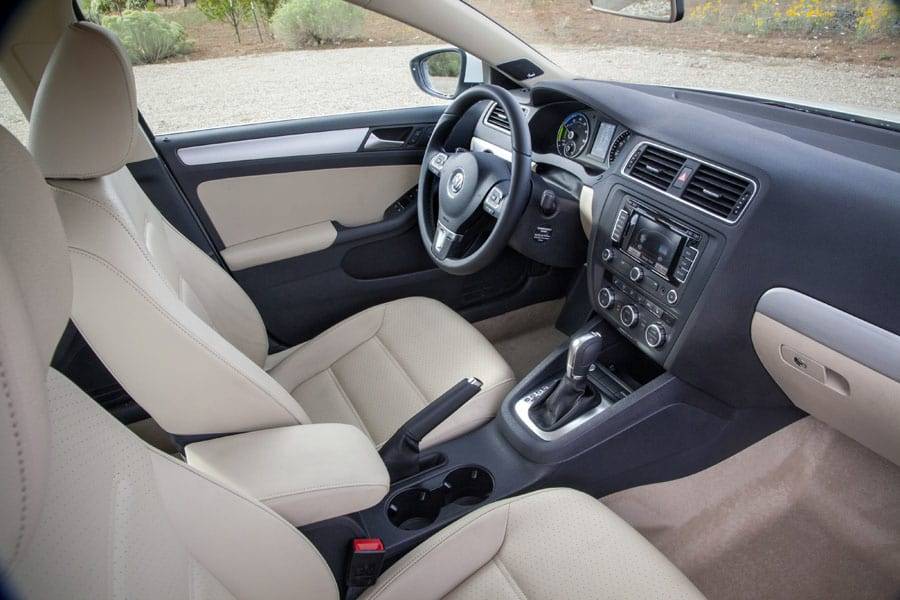 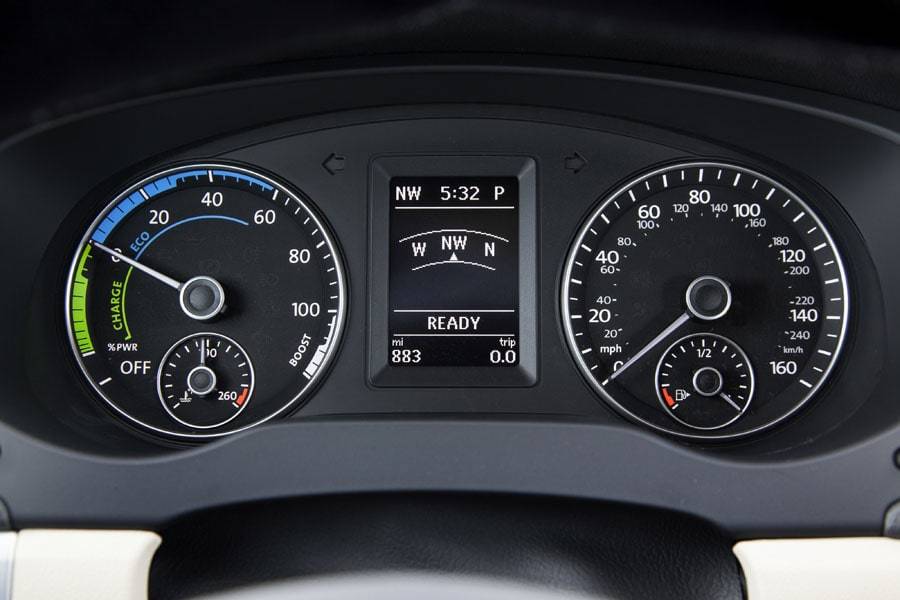 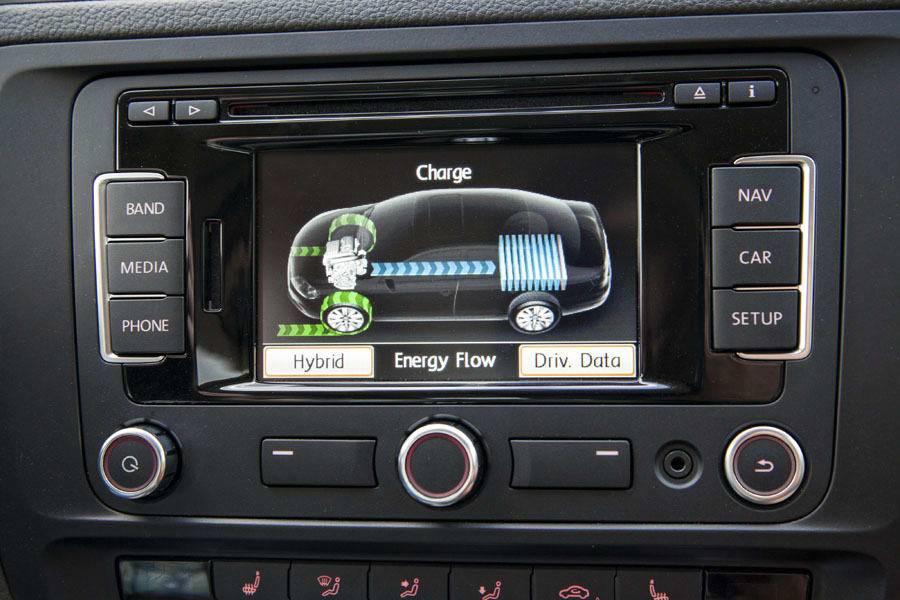 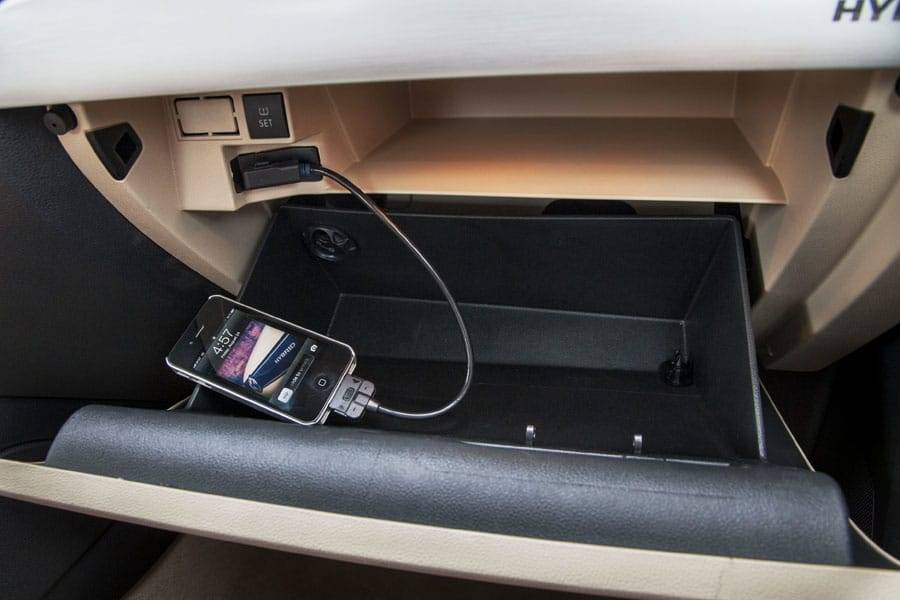 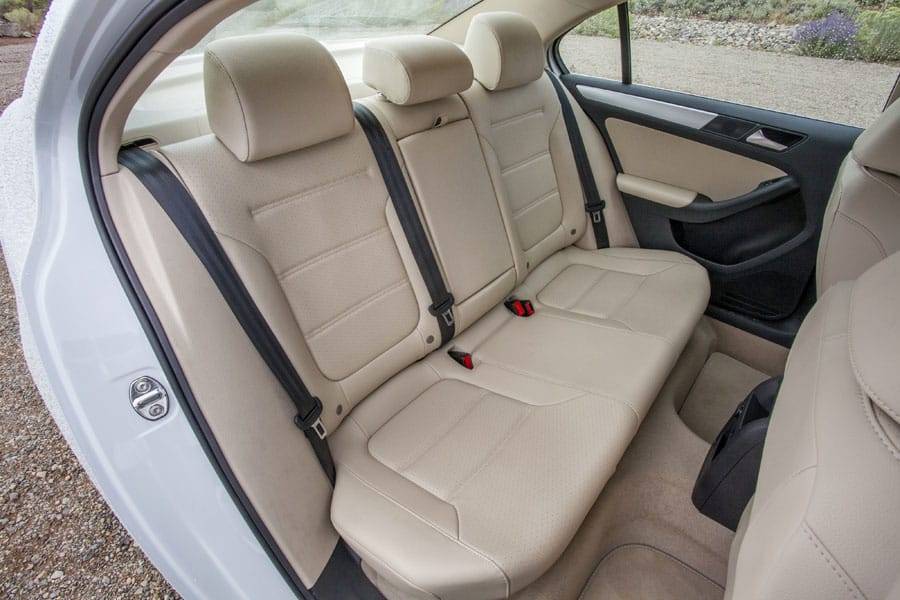 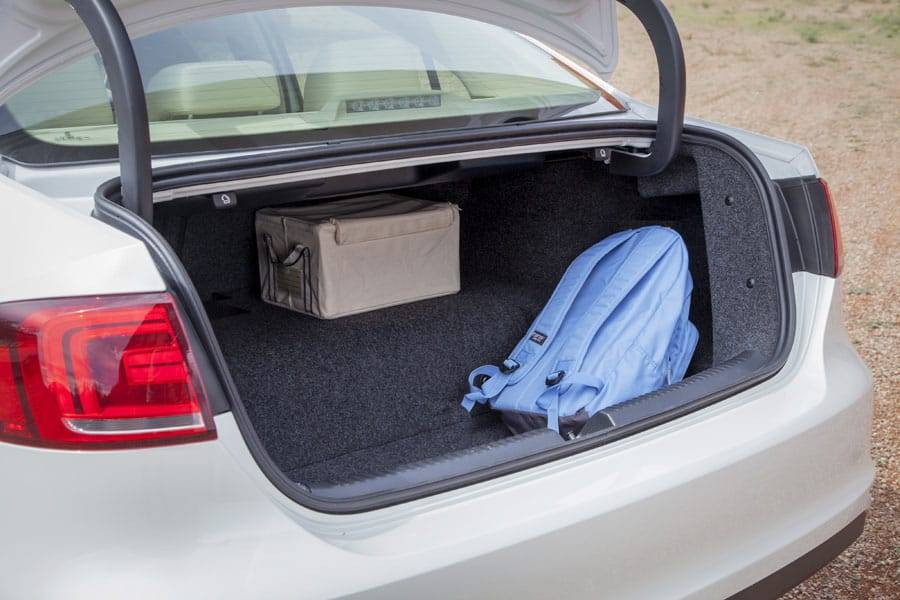 1/12
Unique exterior styling is part of the package with many hybrids, but the Jetta Hybrid could easily be mistaken for the regular Jetta sedan. It does get a unique grille, however, and is available with LED daytime running lights. | Toggle between photos using the right and left arrow keys. Manufacturer photo

When it comes to fuel-saving technology, Volkswagen has been one of the staunchest supporters of diesel engines. Americans, however, have preferred hybrids, and VW is relenting with its new Jetta Hybrid sedan.

The 2013 Volkswagen Jetta Hybrid’s fuel economy puts it among the hybrid elite, and its sporty demeanor is a welcome addition to a segment that lacks excitement. Our enthusiasm, though, is tempered by the car’s clumsy brake-pedal feel and accelerator lag.

The Jetta Hybrid starts at $25,790 including a $795 destination charge. We tested a well-equipped SEL trim level with an as-tested price of $30,155, which is about $4,000 more than a similarly equipped gas-only Jetta SEL. To see the Jetta Hybrid’s pricing and specs compared with the Toyota Prius and Ford C-Max Hybrid, click here.
Unique Approach Yields Excellent Gas Mileage
The Jetta Hybrid gets an EPA-estimated 42/48 mpg city/highway and requires premium gas. Using the EPA’s combined city/highway driving calculation, the sedan gets an estimated 45 mpg compared with the Prius’ 50-mpg rating and the C-Max Hybrid’s 47-mpg estimate.

Based on the car’s trip computer, my observed gas mileage over the course of a week was an impressive 50 mpg. I covered 106 miles at an average speed of 19 mph, and my travels saw stop-and-go city driving, Chicago rush-hour traffic, and suburban streets and highways. The outside temperature hovered in the mid-40s, and I drove it the same way I do other test cars.

The Volkswagen Jetta Hybrid debuts new drivetrain technology for Volkswagen in the U.S. The hybrid system consists of a turbocharged 1.4-liter four-cylinder engine assisted by an electric motor that’s powered by a lithium-ion battery pack. It drives the front wheels through a seven-speed dual-clutch transmission.

The high fuel economy alone might be enough for some efficiency-focused car shoppers, but the Jetta Hybrid offers more, delivering an overall driving experience that popular hybrids like the Prius can’t touch. Responsive steering and taut suspension tuning that’s still compliant enough for daily commuting make the Jetta Hybrid feel nimble in the city and comfortable on the highway. Many hybrids have a way of isolating the driver from the act of driving, whether through numb steering or sloppy handling. The Jetta Hybrid shines above the class norm.
Rough Around the Edges
Not all is well with the Jetta Hybrid model driving experience, though, as it suffers from poor brake-pedal linearity, excessive idle creep, and accelerator lag. These issues combine to make the car feel clumsy in stop-and-go driving and when maneuvering at slow speeds.

Automakers have struggled to perfect brake-pedal feel in hybrids, which blend regenerative braking technology with traditional friction brakes, and the struggle continues in the gasoline-electric Jetta Hybrid. The first half-inch of pedal travel produces immediate stopping power from the car’s regenerative braking system, but after that initial forcefulness the response tapers off significantly, with the last few inches of pedal travel yielding modest braking. It was enough to scare one editor and his passenger. After a few days, I acclimated and the brakes felt less jarring, but they still demanded a lot of my attention in order to make a smooth stop. Let up on the brake pedal and the car will lurch forward rather than creep.

The accelerator lag also drags down the driving experience. Press the gas pedal to take off from a stop, and nothing happens for a moment before the car surges forward. The delay is brief and occurs consistently enough that you can account for it as you drive, but it’s nonetheless another idiosyncrasy that, like the brakes, makes the car feel unpolished.
Design & Comfort
The hybrid’s cabin is nearly identical to the gas-only sedan, and our Volkswagen Jetta Hybrid SEL version had some of the premium features from the Jetta GLI — like a soft-touch dashboard — which helped restore some of the sedan’s premium trappings that were deleted as part of its 2011 redesign. (The redesign did, however, bring about a car priced closer to the competition.) In SEL trim, the Jetta Hybrid’s cabin has enough niceties — both in terms of features and materials — to warrant our car’s $30,000-plus as-tested price.

One of the key interior differences in the hybrid is its instrument panel, which drops the tachometer in favor of a gauge that shows instantaneous power use and when the car’s lithium-ion battery is being charged. As a coaching tool for driving more efficiently, the gauge isn’t as effective as the one in the Ford Fusion Hybrid, which indicates when the gas engine will turn on, helping drivers keep the car in its electric-only mode (E-Mode).

The Jetta Hybrid’s seats are finished in V-Tex simulated leather upholstery. The front buckets are supportive and comfortable, and there’s enough side bolstering to keep you properly situated in front of the steering wheel. The three-person rear bench seat is impressively roomy for two adults, with a comfortable seating position and generous legroom and foot space.

Like many hybrid sedans, a portion of the trunk is occupied by the hybrid system’s high-voltage battery pack; a ledge in the forward portion of the trunk takes up about half of the cargo area’s vertical space. Despite the intrusion, the gas-electric hybrid Jetta retains the regular sedan’s 60/40-split folding rear seat. With the backseat folded, there’s a narrow horizontal slot between the passenger and cargo areas.

Crunching the Numbers
Volkswagen offers a variety of powertrains for the Jetta and, generally speaking, more efficient versions come with higher price tags. We looked at four Jetta drivetrains with automatic transmissions. There’s some inevitable variation where features are concerned, but overall equipment levels are relatively similar. As the chart shows, despite high fuel economy estimates for the diesel and hybrid versions, significantly higher initial prices mean it will be many years before lower fuel costs make up the difference; the Jetta Hybrid’s payback time is the shortest, at around nine years.

Safety
The Jetta Hybrid received an overall rating of four stars (out of five) for its performance in crash tests conducted by the National Highway Traffic Safety Administration. Standard safety features include antilock brakes, an electronic stability system, traction control, side-impact airbags for the front seats and side curtain airbags for both rows. A backup camera is optional.

For a full list of safety features, check out the Features & Specs page.
Jetta Hybrid in the Market
The hybrid market has been defined by quirky-looking cars like the original Honda Insight and the Toyota Prius. Their distinctive appearance lets drivers communicate to the world that they’re driving something different without saying anything at all. The trend is repeating itself in the electric-car segment with models like the Nissan Leaf and Chevrolet Volt. The Volkswagen Jetta Hybrid, though, speaks to the future, and the idea that hybrids will be just another powertrain technology we’ll see in more regular cars. It’s a good effort overall, but VW needs to address the car’s brake and accelerator quirks or it risks alienating potential buyers.