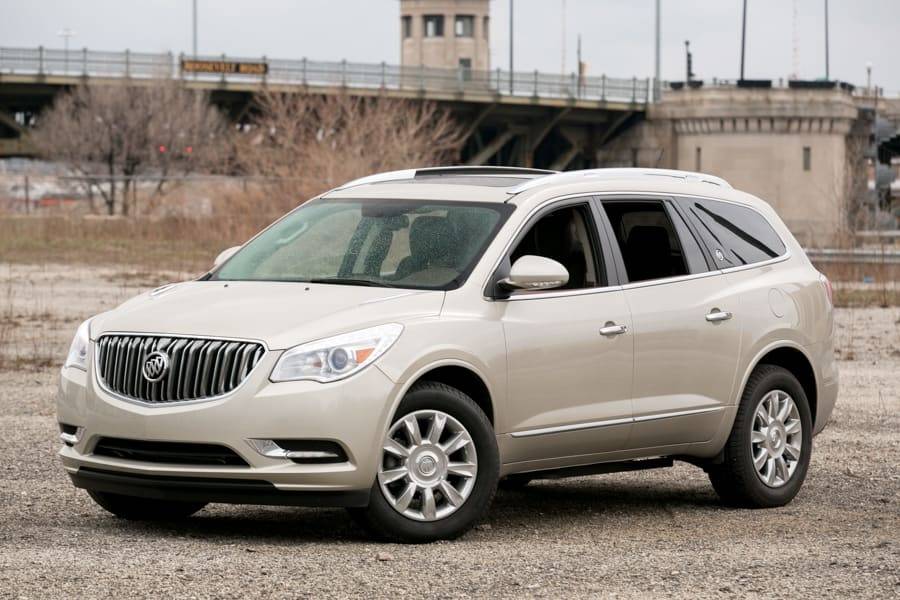 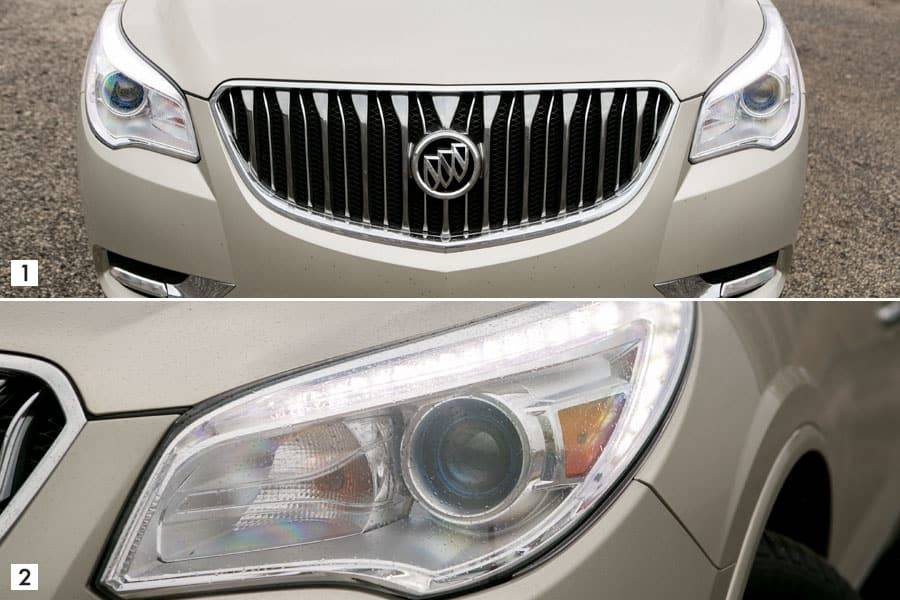 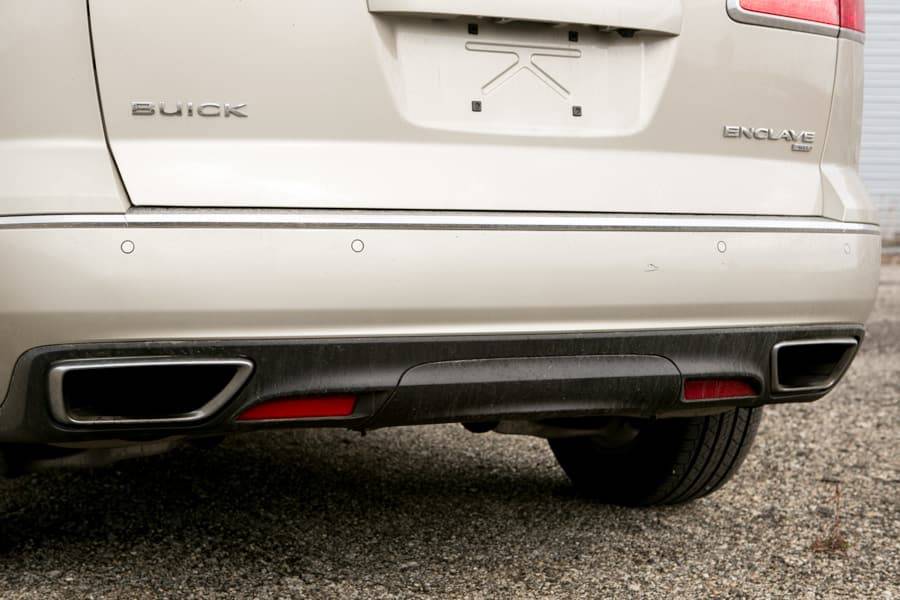 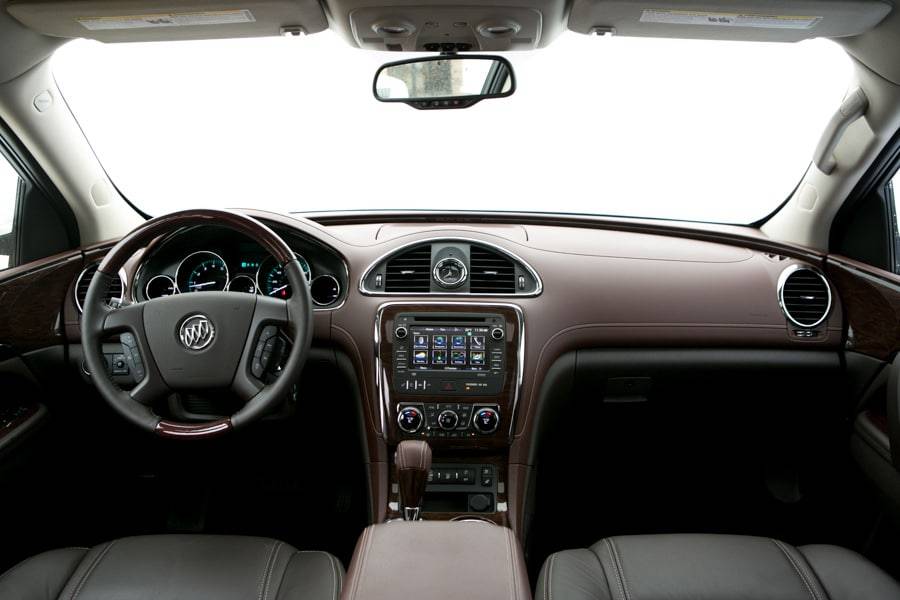 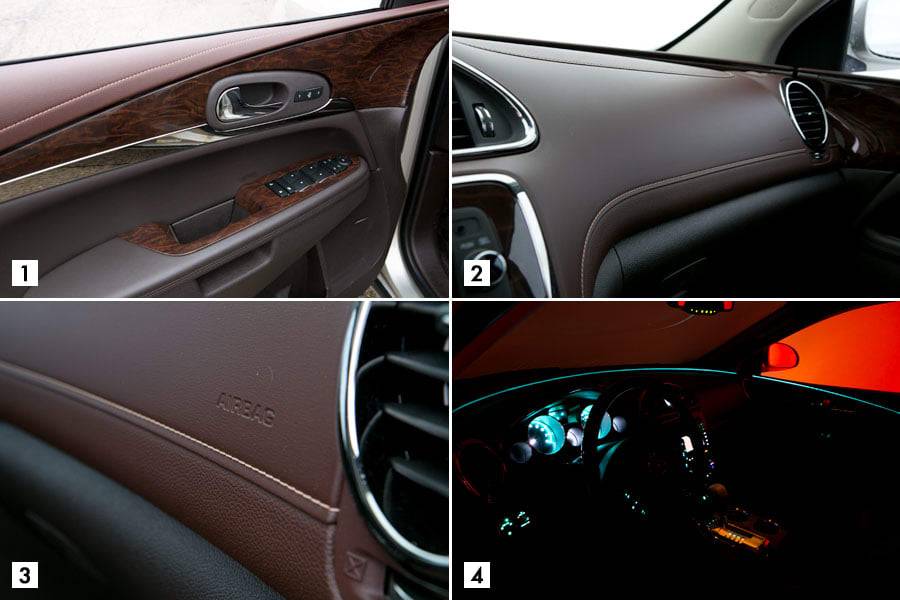 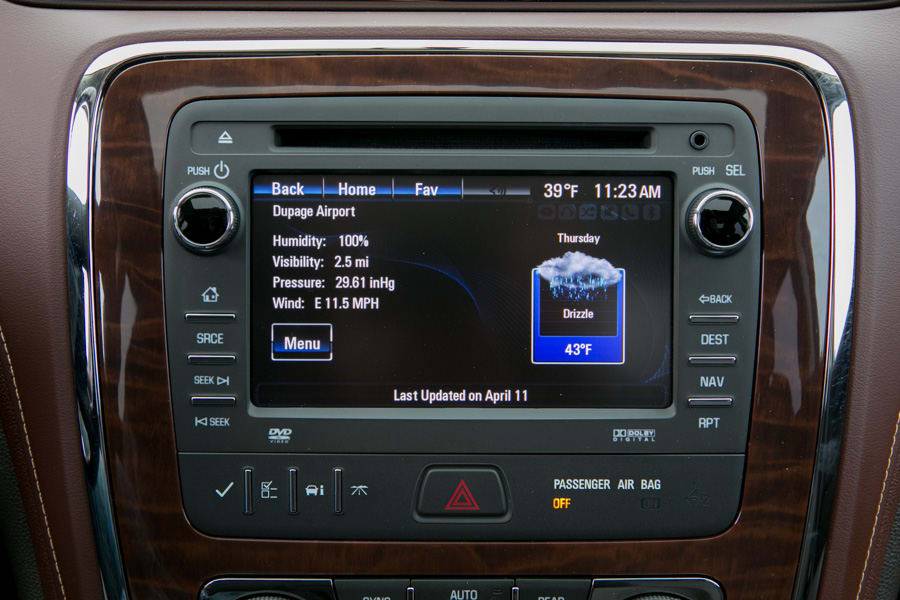 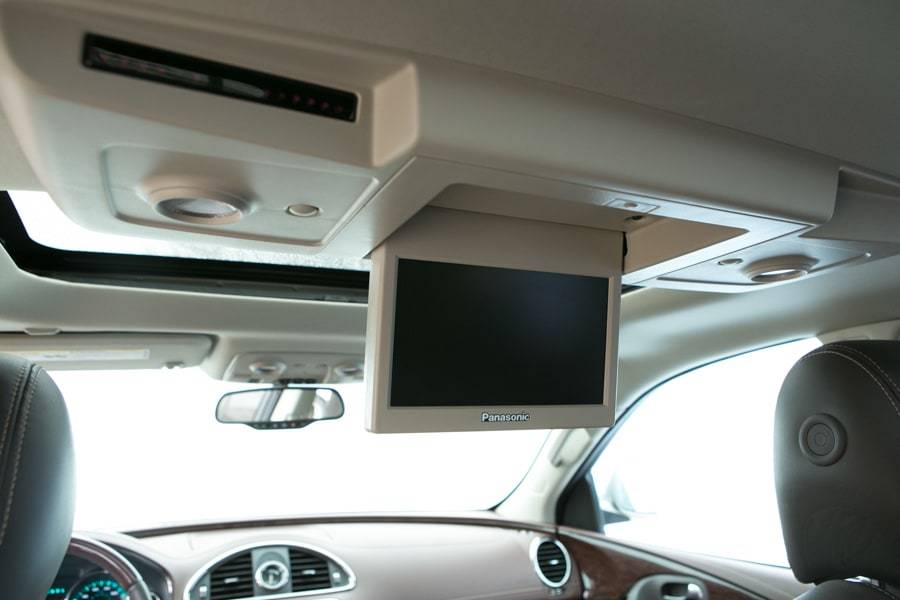 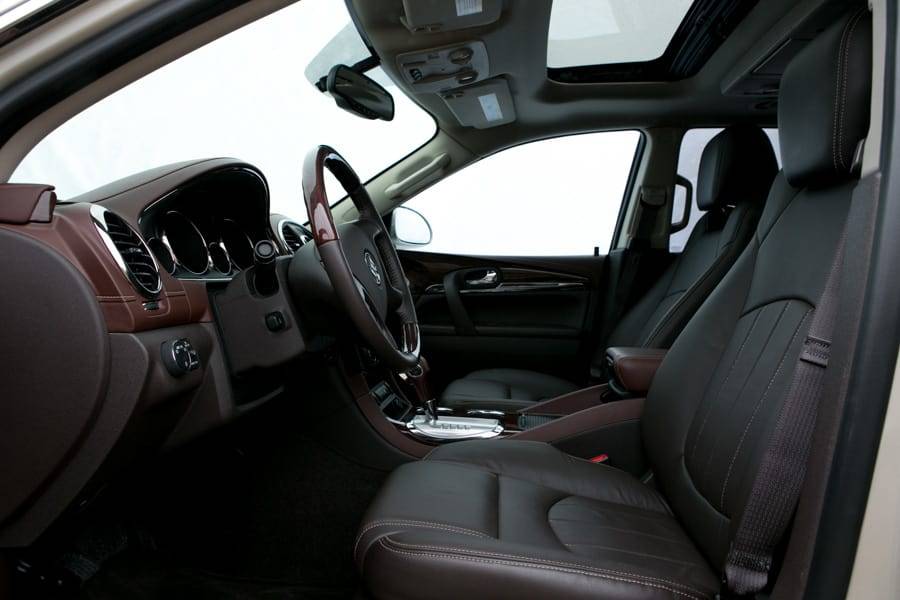 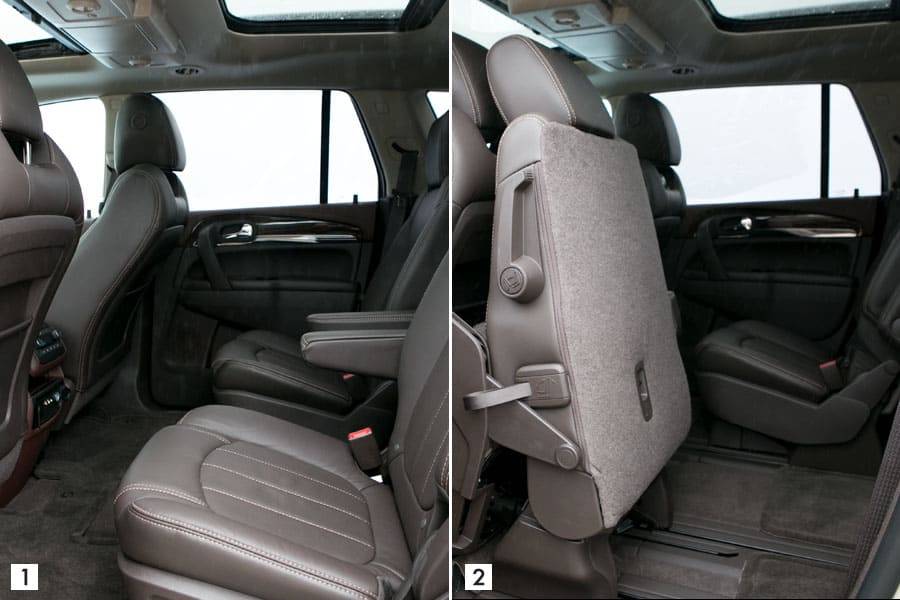 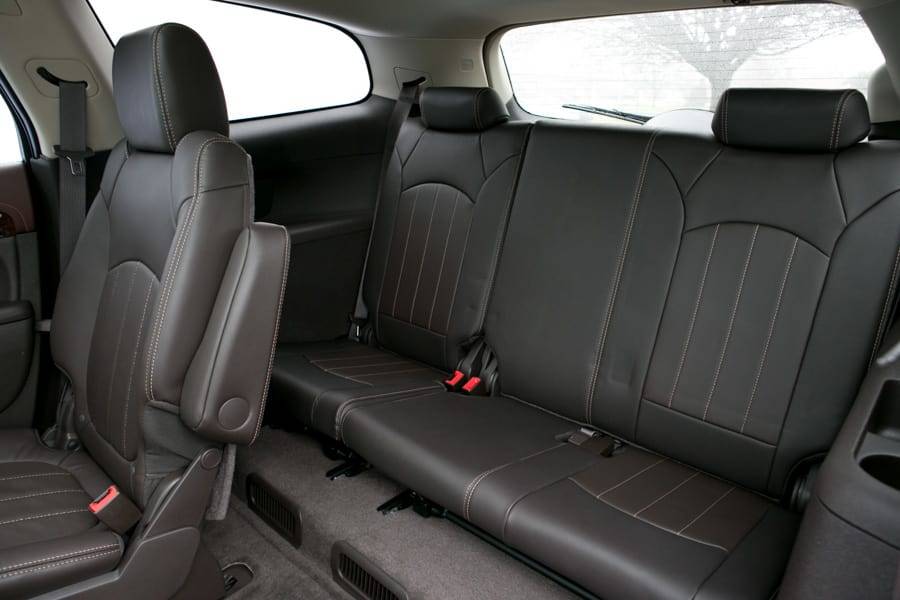 1/11
The 2013 Buick Enclave&#39;s updated front styling is the most significant exterior change since its introduction. Gone are the small grille and bug-eye headlights, as is the two-tone exterior paint, which was ditched in favor of monochrome paint. | Toggle between photos using the right and left arrow keys. Cars.com photo by Evan Sears

Editor’s note: This review was written in May 2013 about the 2013 Buick Enclave. Little of substance has changed with this year’s model. To see what’s new for 2014, click here, or check out a side-by-side comparison of the two model years.

The 2013 Buick Enclave’s updates are the most significant since the full-size premium crossover SUV emerged as a 2008 model. Even so, the Enclave’s redesign is mild and features new front styling and a revised instrument panel with new technology, as well as ride and handling updates.

While the Buick Enclave is slightly nicer inside for 2013, it’s the premium SUV’s roominess and truly usable third row that distinguish it from competitors.

Available with seven or eight seats, the Enclave has a $39,340 starting price (including destination charge) and is $3,000 to $7,000 below three-row luxury SUVs like the 2013 Acura MDX, the all-new 2013 Infiniti JX35 and the 2013 Lincoln MKT (compare specifications and features here). The Enclave’s front- or all-wheel drive configuration and standard V-6 with six-speed automatic transmission carry over from 2012. (See the two model years compared here.)

Interior
The 2013 Enclave offers a marginally more luxurious experience than before, with new interior colors and new materials on the instrument panel and doors. Buick is trying to make the Enclave a luxury vehicle, but its puzzle of ill-fitting trim and interior panels isn’t as seamless as what you’ll find in the MDX or JX35. The new Cocoa-colored interior of our tester was cheapened by a sheen and texture that didn’t pop like many luxury interiors featuring a similar color choice.

Overall, Acura’s and Infiniti’s SUVs offer more luxurious materials and finishes for those concerned more about niceness than maximum usability. The 2013 Enclave’s new blue ambient lighting, real chrome accents and detail stitching around the dashboard add flair, though they don’t fully compensate for other lacking details.

The Enclave is the most premium full-size crossover among its General Motors chassis-mates — the GMC Acadia and Chevrolet Traverse — which were also redesigned for 2013. The 2013 Traverse’s and Acadia’s interior improvements are more notable compared with the Enclave, which takes a skip compared to the others’ jump. A more stylish design, real chrome accents, generous use of convincing faux wood and a chrome-trimmed analog clock differentiate the Enclave’s interior from its siblings. The Traverse and Acadia can have many of the Enclave’s features in the same size package, including a moonroof with a fixed rear skylight, a power passenger seat, heated and cooled front seats, 20-inch wheels and a multimedia system with advanced smartphone integration for Pandora and Stitcher internet radio applications.

The Enclave is, of course, styled differently and has many more standard features for its higher starting price, like high-intensity-discharge headlights, remote start and a power liftgate. Leather is not included, however; the Enclave’s base Convenience trim level has standard cloth seating. Leather comes standard in the two higher trim levels, Leather and Premium (compare the three levels side-by-side here). One glaring omission common in other luxury cars is a smart key system. Smart key systems allow the key to stay in a pocket or purse while the driver unlocks the car through touch and starts it via a button. The Enclave uses a traditional key ignition system with remote locking and unlocking.

Where Buick keeps up with tech offerings is its standard IntelliLink touch-screen, replacing the 2012’s aging navigation and multimedia offerings. The 7-inch touch-screen pairs with a standard backup camera, Bluetooth telephone connectivity and streaming audio, USB input and satellite radio. Navigation is optional. Internet streaming radio applications pair with compatible smartphones. The system is hampered by having touch-sensitive capacitive controls instead of physical buttons for switching sources and navigation. The traditional tuning and volume dials improve usability.

Roominess
The Enclave’s average interior niceness is far from a deal-breaker for those who really need the room. The Acura MDX and Infiniti JX are more opulent, yet neither can comfortably fit an adult in the third row like the Enclave does. The 2013 Enclave dwarfs its competitors with near-minivan spaciousness in all three rows of seats — plus exceptional comfort. Standard seating for seven includes two captain’s chairs in the second row, which is ideal for those who plan to make frequent use of the third row, as the aisle between the seats is wide enough for adults to easily scoot past. The captain’s chairs also recline and slide forward and back, providing ample room for third-row passengers while maintaining sufficient legroom for occupants in the captain’s chairs, even when they’re slid completely forward. A second-row bench seat with room for three is a no-cost option to bump seating capacity to eight.

Exterior & Styling
The updated Enclave is less bug-eyed and features a more prominent grille and LED daytime running lamps, as well as a new hood, fenders and rocker moldings. The look is more cohesive and proportional. The Enclave’s staple two-tone paint with dark lower accents is gone in favor of a single exterior color, which looks classier.

All Enclaves feature high-intensity-discharge front projector lighting standard while adaptive lighting that turns in the direction of the steering wheel is optional. Changes are less apparent out back, with new LED taillights and tailpipes now integrated into the rear bumper.

On the Road
The 2013’s ride is a more luxurious experience than before. It’s less minivan and more Mercedes, with a new suspension package adding a sense of composure and solidity in how the car absorbs bumps. The Enclave is still a large SUV, but it feels nimbler than before, with fewer similarities to a minivan.

Driving the Enclave is pleasant except for the times when the thick A-pillars and large side mirrors block forward visibility. Cars and pedestrians can hide in the A-pillar blind spot, which is especially troublesome at stop signs where cross traffic doesn’t stop.

The Enclave’s transmission hadn’t offered much driving confidence before 2013. New transmission tuning helps the car accelerate effortlessly by holding the gears longer and being smarter and quicker about when to downshift for passing. The Enclave’s 3.6-liter V-6 makes 288 horsepower. Gas mileage is unchanged from 2012, at an EPA-estimated 16/22 mpg city/highway with all-wheel drive and 17/24 mpg with front-wheel drive. Until the redesigned 2014 Acura MDX is available in summer 2013, with estimates of 18/27 mpg for all-wheel-drive models, you won’t find much better mileage among large three-row SUVs. The Enclave can tow up to 4,500 pounds with an available towing package.

Safety
The 2013 Enclave performs well in both Insurance Institute for Highway Safety and National Highway Traffic Safety Administration crash testing. The Enclave was named a Top Safety Pick by IIHS, scoring Good in frontal, side, rear and roof-strength tests. The Enclave earned five out of five stars overall in the NHTSA tests.

Standard safety equipment includes a new style of airbag that deploys from the driver’s seat between the driver and passenger to help protect front occupants who aren’t on the side of an impact. Other airbags include frontal and front-seat side-impact ones, plus side curtain airbags for all three rows of seating. Standard head restraints are four-way adjustable. See more standard safety features here.

Newly available safety features include blind spot monitoring and rear cross-traffic alert, which are standard on the more expensive Leather and Premium Group trim levels. See how well child-safety seats fit in the Enclave in our Car Seat Check.

2013 Buick Enclave in the Market
What the Enclave lacks in cabin quality, it makes up for in roominess across all three rows of seats. There are more luxurious SUVs and roomier family-haulers, but the Enclave offers an unrivaled blend of premium niceness and family friendliness.

The combination is working for Buick. The Enclave is the brand’s best-selling model through March 2013, with sales up 55 percent compared with 2012.