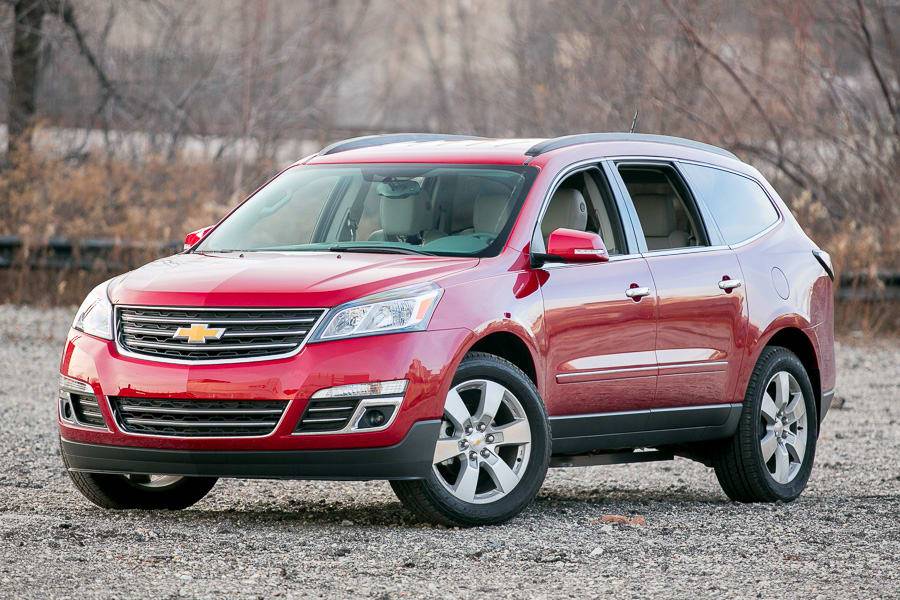 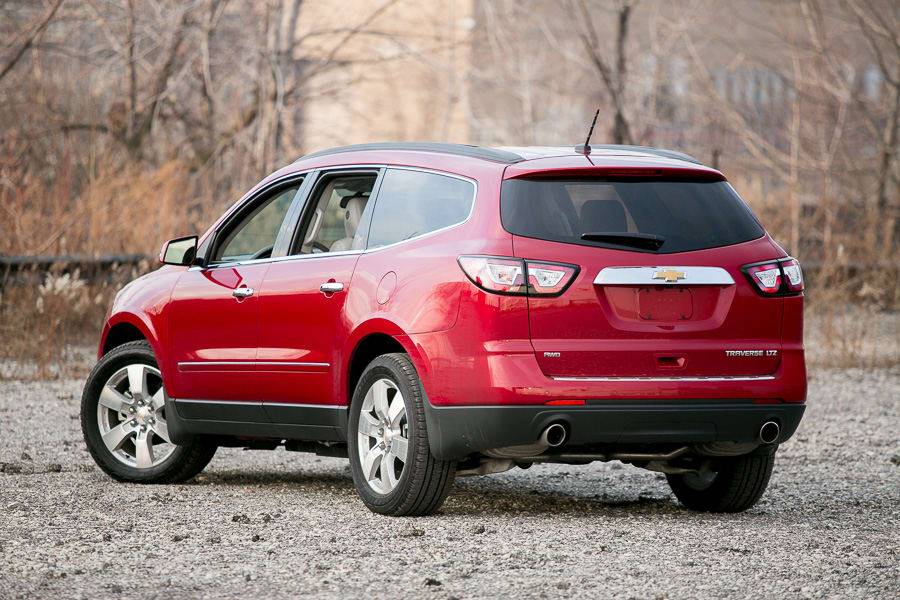 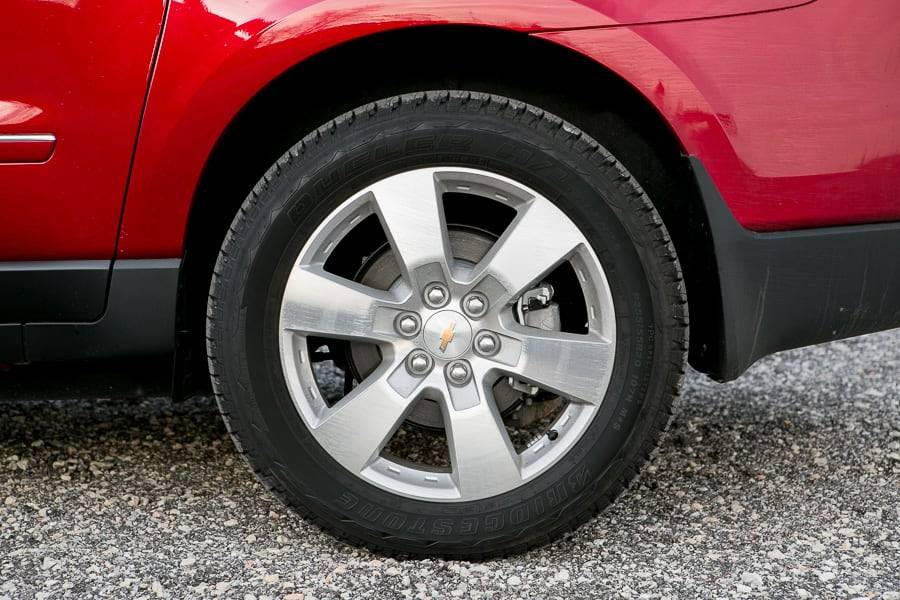 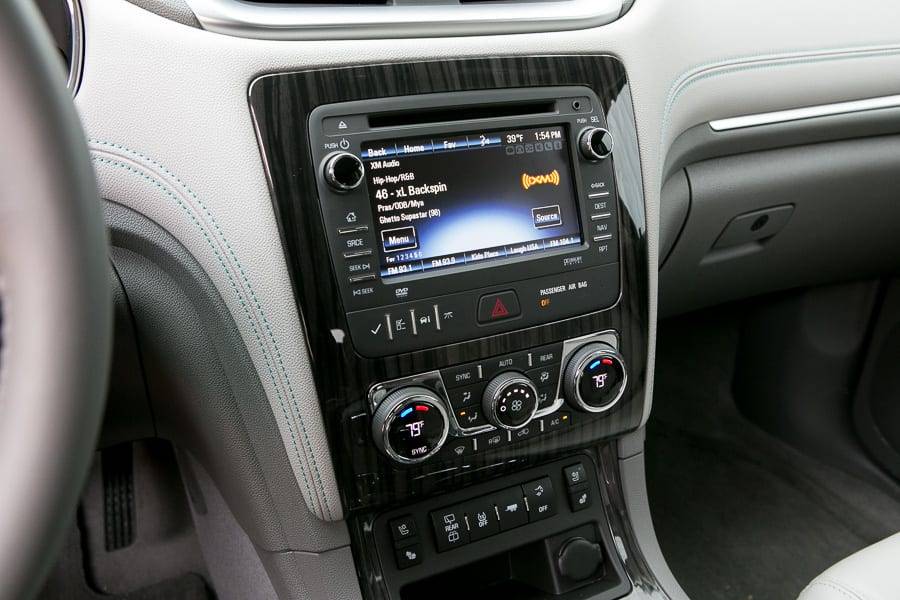 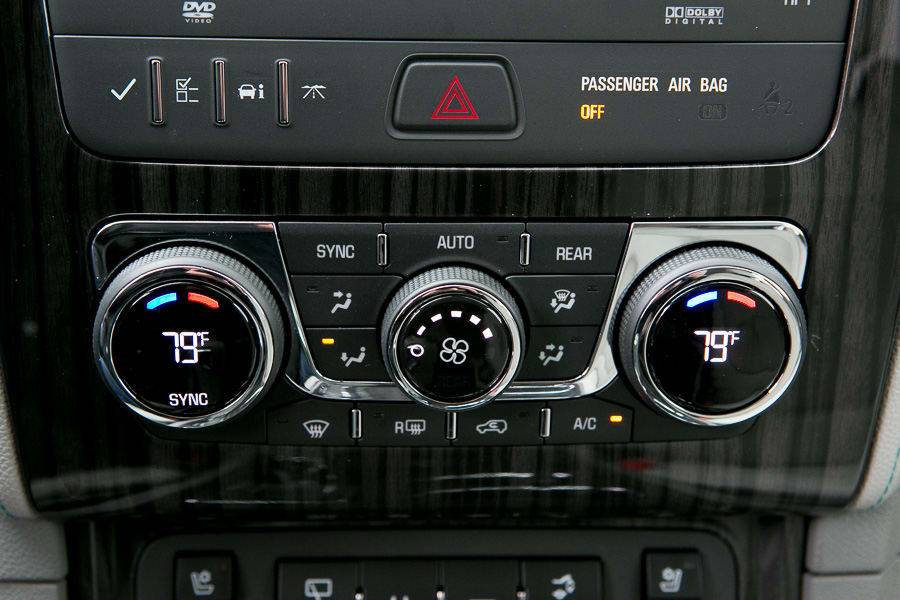 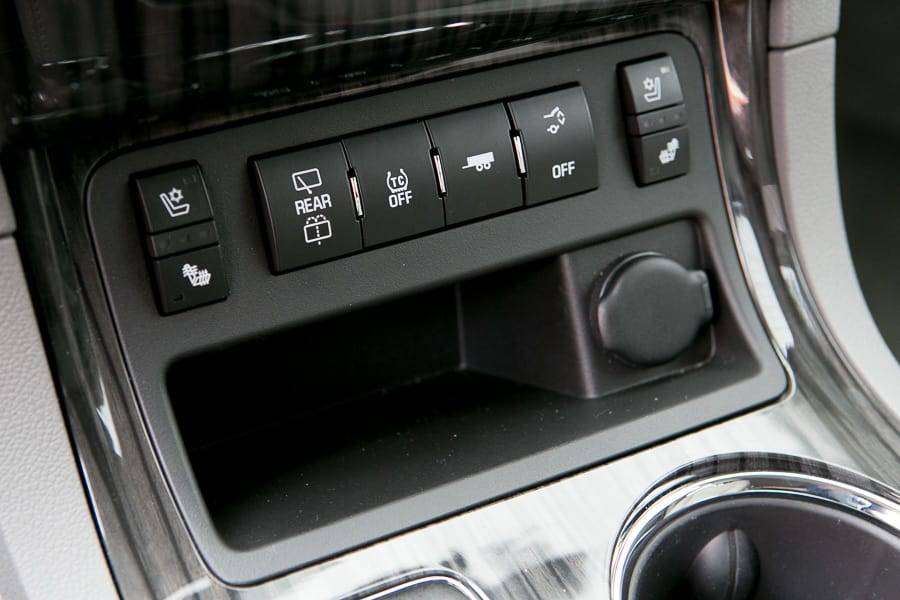 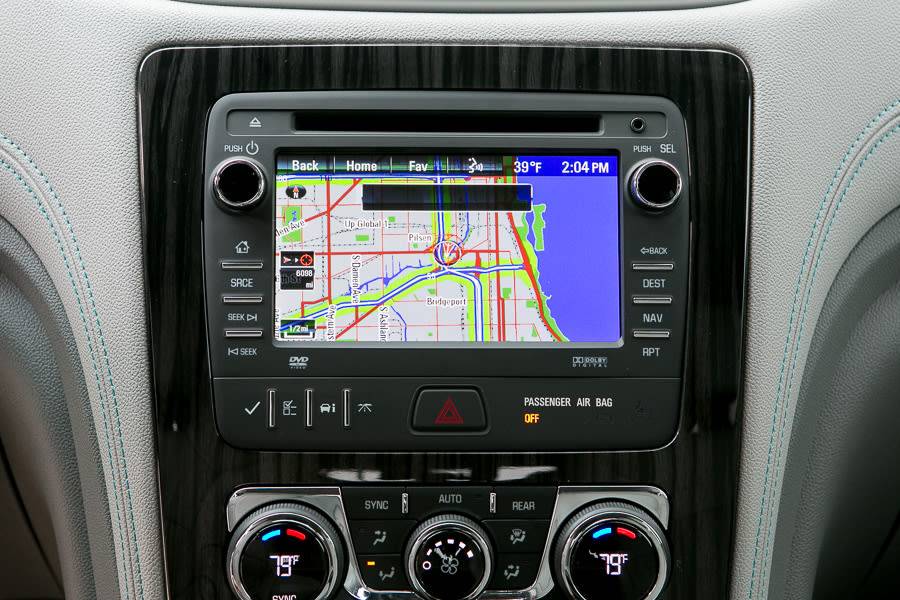 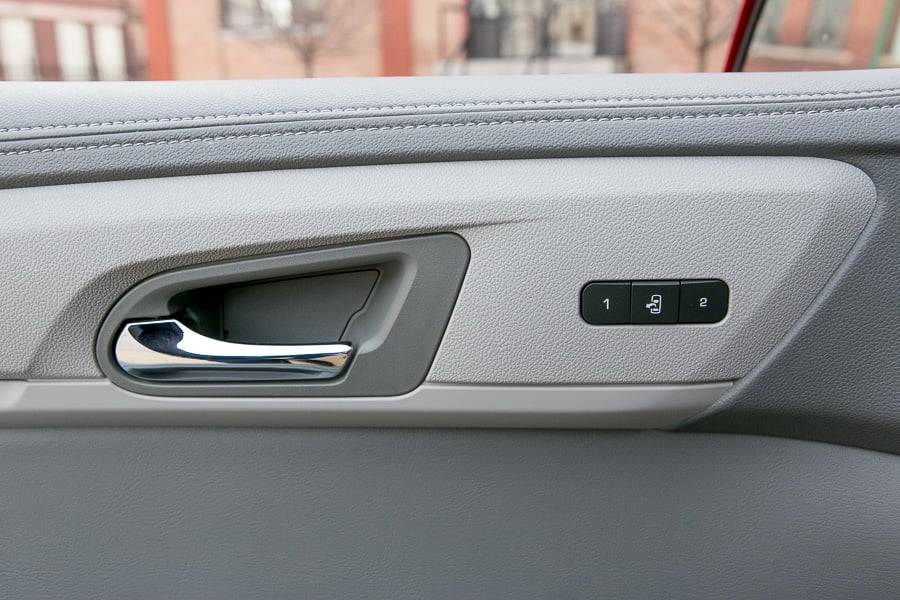 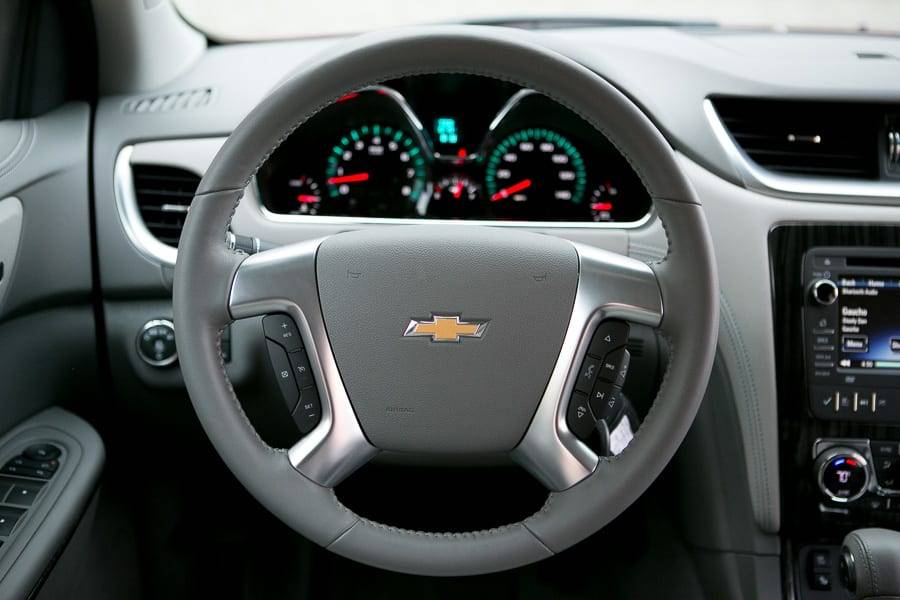 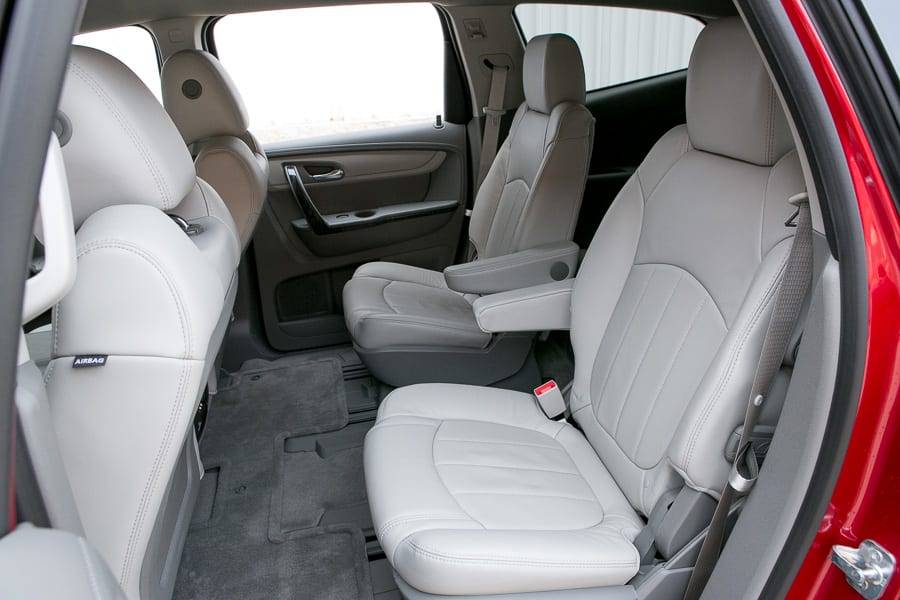 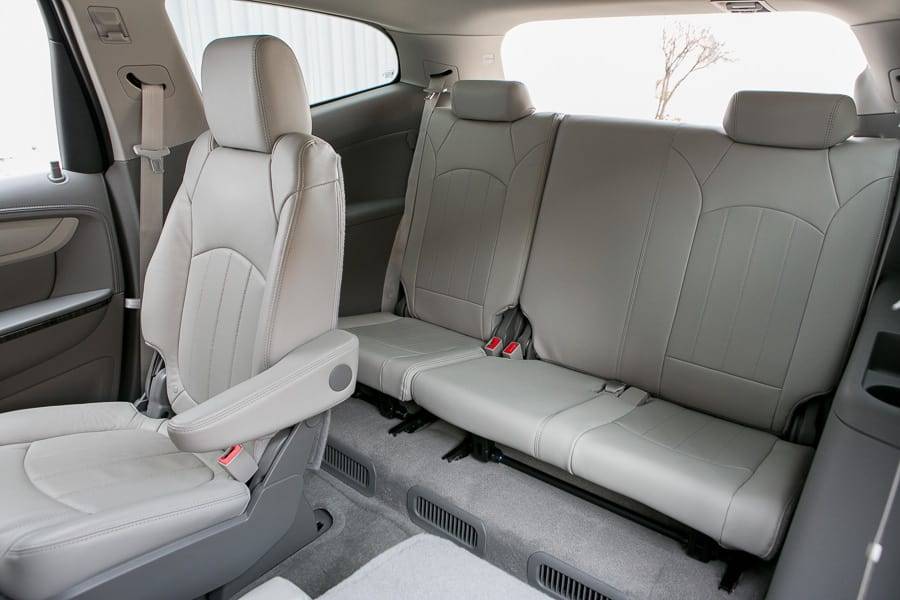 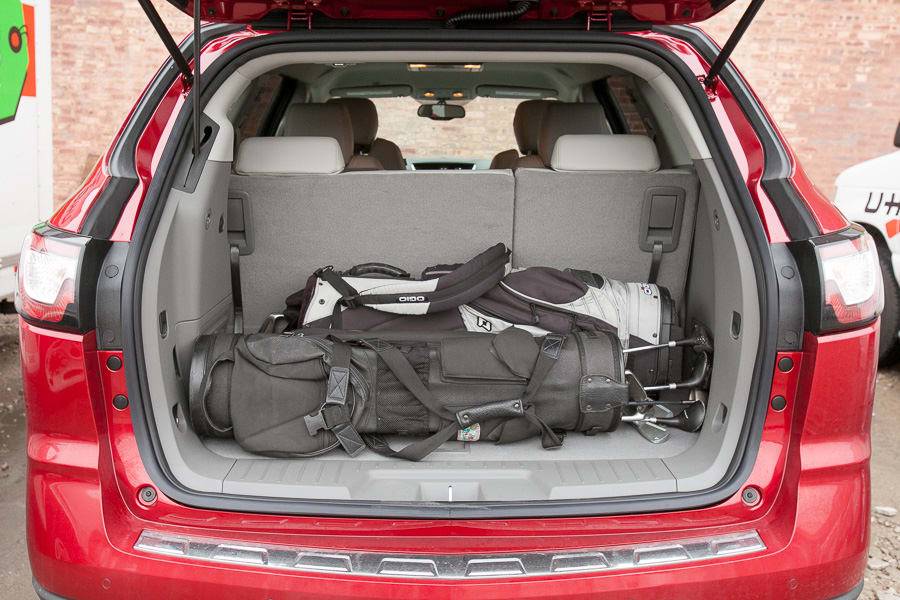 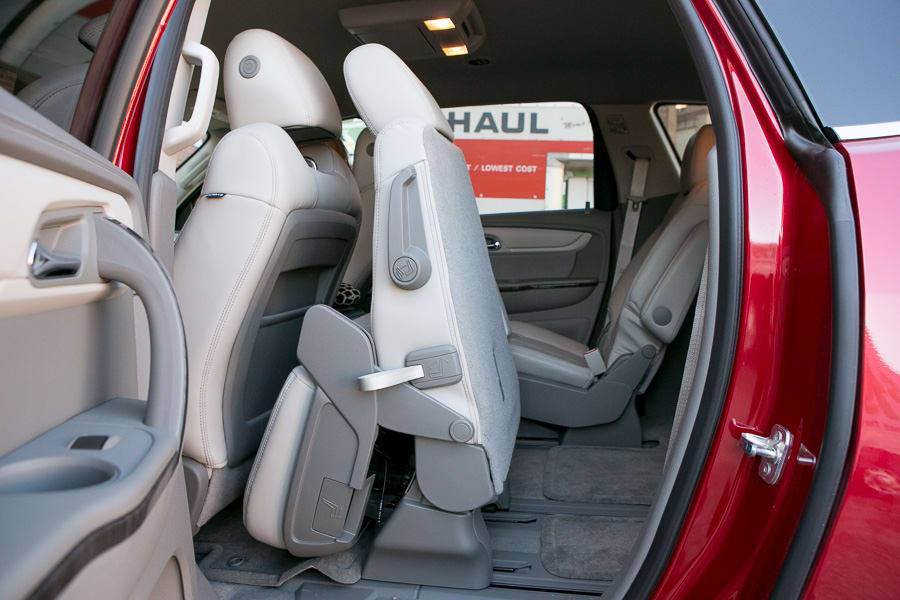 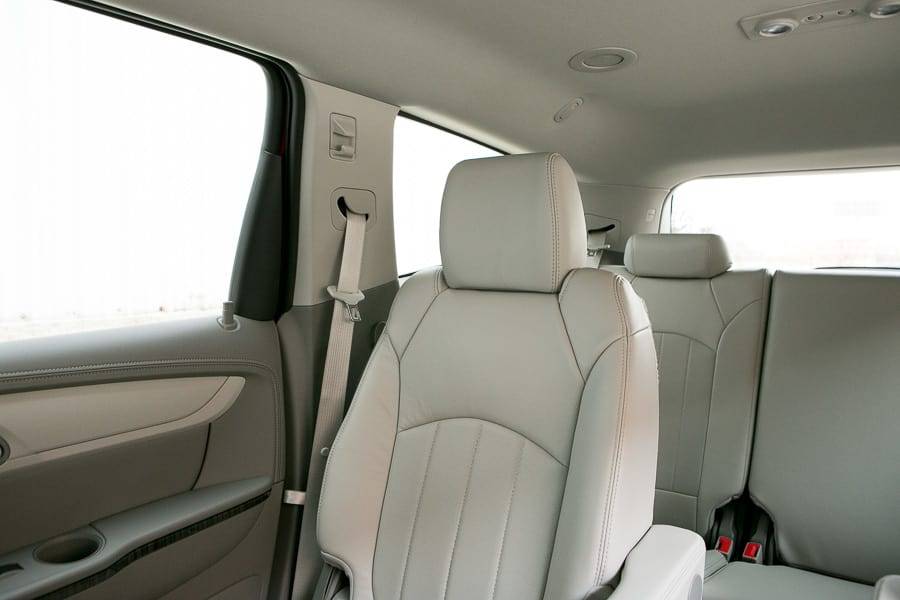 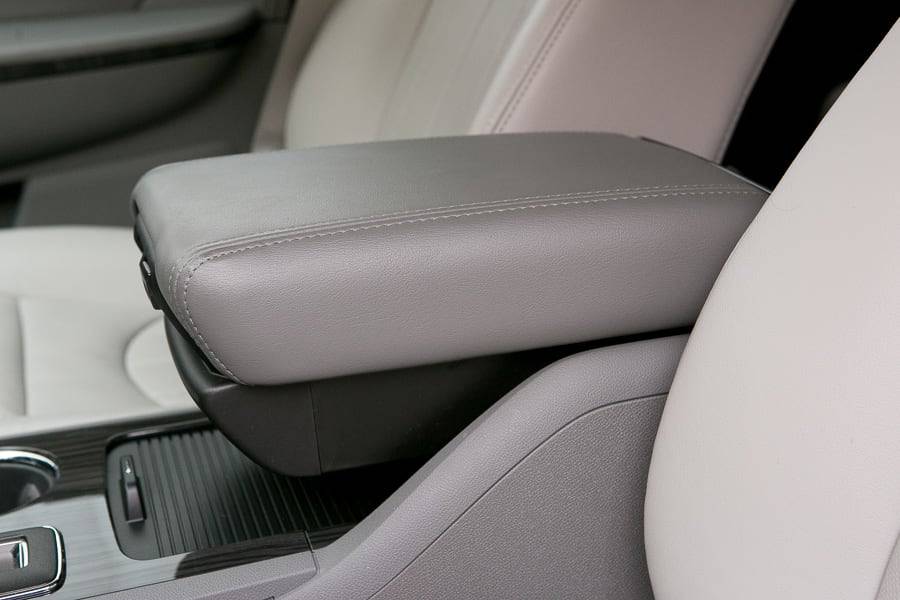 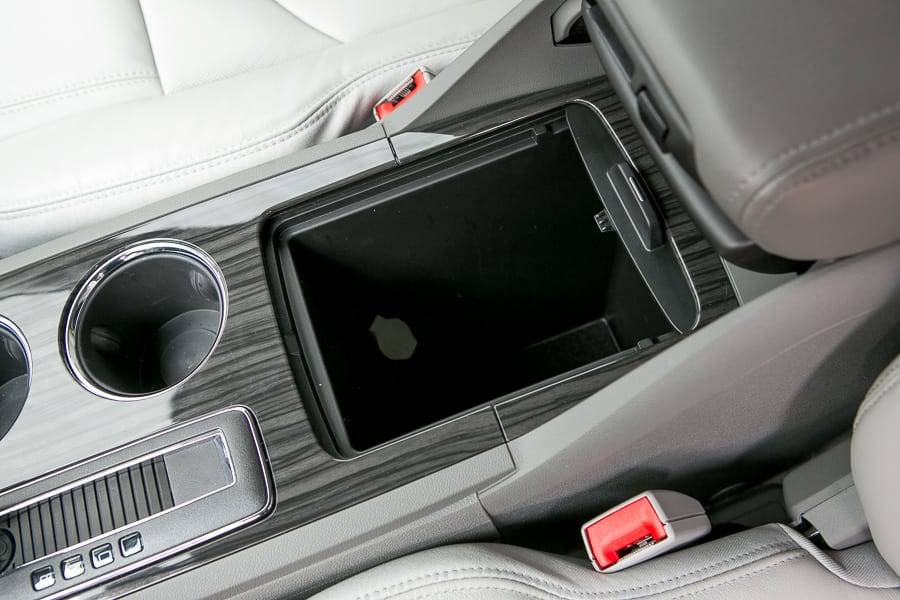 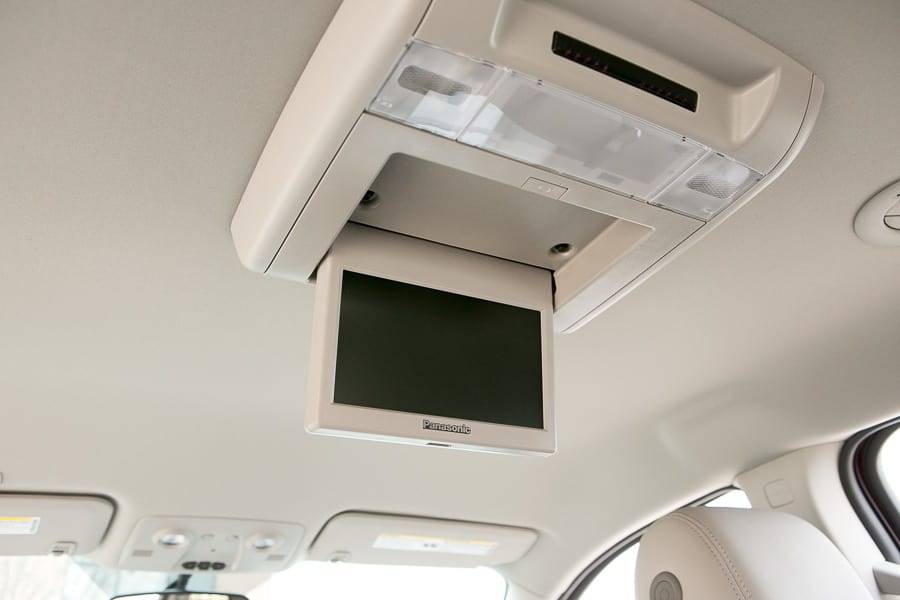 1/18
The restyled 2013 Traverse has a broad horizontal grille, new headlights and a sculpted hood. We found the previous generation inoffensive to look at, and this one seems to hold that line. | Toggle between photos using the right and left arrow keys. Cars.com photo by Evan Sears

Editor’s note: This review was written in February 2013 about the 2013 Chevrolet Traverse. Little of substance has changed with this year’s model. To see what’s new for 2014, click here, or check out a side-by-side comparison of the two model years.

In Cars.com’s comparison test of 2012 full-size crossover SUVs with three rows of seats, the 2012 Chevrolet Traverse took second place behind the Honda Pilot by a margin of just 12 points — out of a possible thousand. What was the most common complaint? Interior quality. For 2013, Chevrolet has updated the Traverse’s interior, exterior and a few other aspects to bring it up to date.

Thanks to a number of small upgrades, the redesigned 2013 Chevrolet Traverse can stand up to any model in its class — though it depends on how you equip it.

The 2013 Traverse, which can seat seven or eight, retains its earlier strengths — key among them its generous size. “Car-based” SUVs hit the scene several years ago promising most of the good aspects of truck-based SUVs without the drawbacks — namely unnecessary size, weight and thirst for petroleum. As much as any crossover, and probably more, the Traverse delivers on this promise, offering more interior space than a Chevy Tahoe from similar exterior dimensions. It’s not as tall and is easier to get into, and its mileage, though not stellar in its class, beats the Tahoe by 2 mpg in combined driving.

To beat the Traverse for size, you have to go to the Chevy Suburban (essentially an extended Tahoe) or a minivan. See these models compared side by side here.

The main thing the Traverse sacrifices by not being a true truck is towing capacity. However, among large crossovers its capacity is generous at up to 5,200 pounds. The Mazda CX-9 tops out at 3,500. The Flex and Pilot hit 4,500 and the Toyota Highlander and Ford Explorer (now technically a crossover itself) come close at 5,000 pounds. See the towing specifications and the Traverse’s size dominance compared side by side here.

Distributed Space
To boil it down, the Traverse has less second-row legroom than the competitors above by as little as 1.7 inches and up to as much as 7.5 inches. But what matters most is the distribution of the various seats and storage space. Legroom here is enough for an adult, thanks in part to a sliding bench seat or optional captain’s chairs. The Traverse’s third-row legroom has an advantage over the Pilot and CX-9 by roughly an inch. By the numbers, the Pilot and Flex have more headroom back there, but here again a 6-foot-tall adult fits fine in the Traverse. That’s not true of the CX-9.

The Traverse manages to fit adults in all rows while still providing more cargo volume than its competitors behind the third row: 24.4 cubic feet. That’s a 4.4-cubic-foot margin over the Flex, which is the next roomiest. When the second and third rows are folded, the Traverse beats them all with 116.3 cubic feet.

For kids, accommodations are good but far from perfect. The second-row seats slide forward in a special way to provide third-row access: The bottom cushion pops up vertically against the backrest to open up passage. It’s effective, but some of our staff parents reported that the Traverse’s high step-in height was a challenge for kids. As for child-safety seats, the spaciousness is a benefit, but the second row’s Latch anchors are difficult to access. See our complete Car Seat Check here.

Interior Upgrades and Downgrades
The interior changes for 2013 are mostly positive, starting with a redesigned center control panel on the dashboard. It seems a small thing, but it’s a focal point in the cabin for drivers. Classier wood-look trim replaces the previous generation’s plain black-plastic backdrop. The ventilation controls look and feel richer. Unfortunately, the bezel and buttons directly below them are a cheapo carryover from the old style.

I’m also not too excited about what goes on above the ventilation controls. The optional touch-screen navigation system is surrounded by touch-sensitive “capacitive” buttons rather than physical buttons. It’s horrible to see this on a newly introduced system that’s likely to stick around for years. These non-buttons respond erratically, feel wrong and don’t work if you’re wearing gloves, similar to a smartphone. Fortunately, the Traverse’s touch-screen does work with gloves (unlike smartphones and tablets, most car touch-screens are pressure sensitive and will work if you’re wearing gloves or have dry skin — though a gloved finger’s ability to hit the right spot is another matter).

The 6.5-inch screen’s size is another missed opportunity. With competitors incorporating screens as large as 8.4 inches diagonally, this is just too small for a large vehicle in which the screen is so far from the occupants.

Perhaps it seems unlikely to the people who design vehicles, but the usability of features like this are enough to make or break a sale. Ford is learning this the hard way with its troublesome MyFord Touch system.

Other trim upgrades in our Traverse LTZ, the top trim level, include soft-touch surfaces on the front doors and dashboard, contrast stitching and some of the best faux aluminum you’ll find. Our only gripe was a squeaky center armrest — always disappointing on a brand-new car.

Now that the Traverse has this interior, its more expensive sister models, the GMC Acadia and Buick Enclave, seem even more unnecessary. See the siblings compared here.

Behind the Wheel
A 3.6-liter V-6 engine and six-speed automatic transmission do a fine job moving the large Traverse, even one equipped with all-wheel drive, as our test model was. The brakes are functional but feel numb and a bit under-assisted. The 2012 Traverse in our test drew raves for its quietness and comfort. Overall comfort is still good, but the ride quality in our 2013 wasn’t what we remembered. It’s likely that our LTZ’s standard 20-inch wheels firmed up the ride. Lower trim levels have 17-inch steel and 18-inch aluminum rims. See the four trim levels compared side-by-side here.

Safety
The Insurance Institute for Highway Safety named the Traverse a Top Safety Pick, designating top scores in all tests. The federal government hasn’t yet crash-tested the Traverse but has granted it four out of five stars for rollover resistance (determined without a true rollover test) — typical for this vehicle class.

Standard safety features include the required antilock brakes and electronic stability system, plus newly adjustable front-seat head restraints. In addition to up and down, they can now be moved forward and back. Anyone who wants to bother can position them close to their head for rear-impact protection, but the true benefit is the ability to push them back if needed. Some head restraints sit too far forward and are uncomfortable.

Also standard are a backup camera, front-seat torso airbags and side curtain airbags protecting all three rows of seats. The Traverse and its siblings also introduce the market’s first front-center side-impact airbag, which deploys between the front seats in a side impact, preventing, for example, spouses from literally butting heads. (No word yet on a feature that prevents figurative head-butting.) See all safety features listed here.

Traverse in the Market
It took a while for automakers to replace their truck-based SUVs with lighter crossovers, and now the full-size class is flush with highly competitive three-row models, including the recently reworked Nissan Pathfinder and Hyundai Santa Fe (now a larger model replacing the Veracruz). The 2013 Traverse’s navigation system is a major deterrent, but if you don’t mind it and opt for the smaller wheels (and subsequent better ride quality), the 2013 Traverse can compete with anything on the market. As upgraded, it might even take the crown from the Honda Pilot.