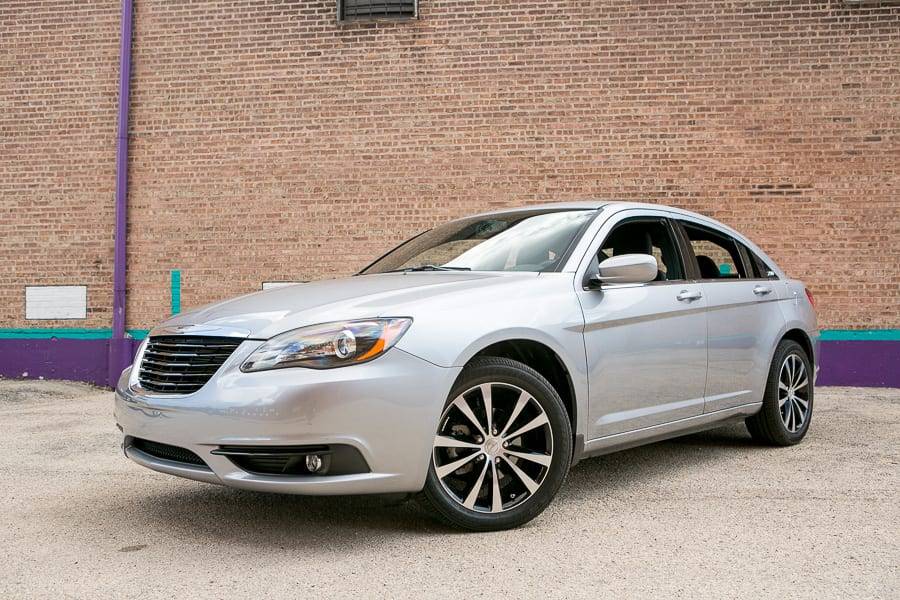 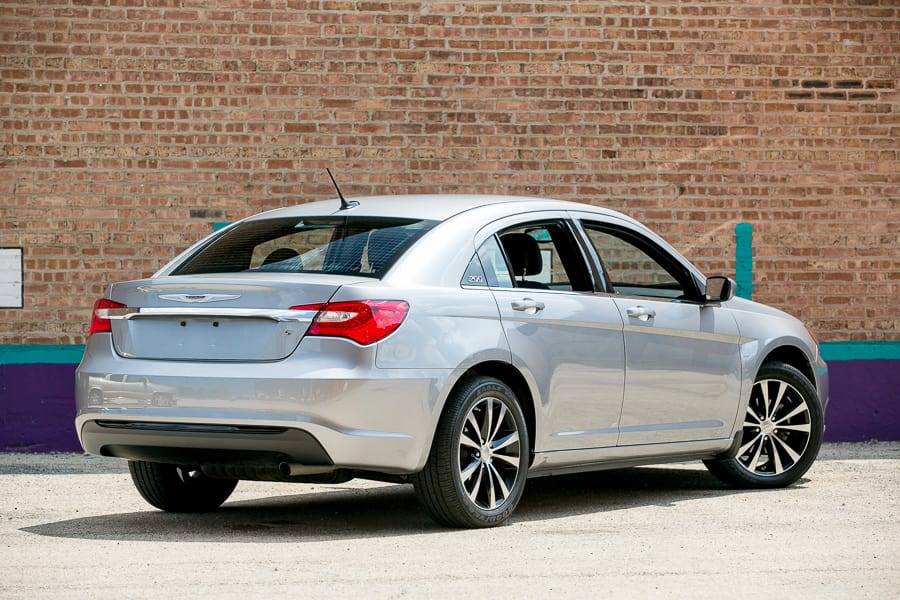 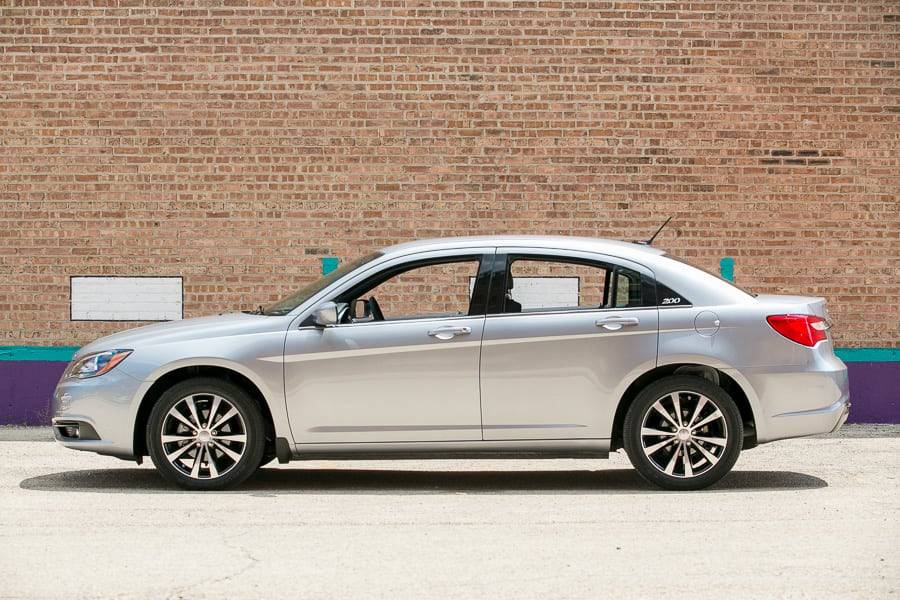 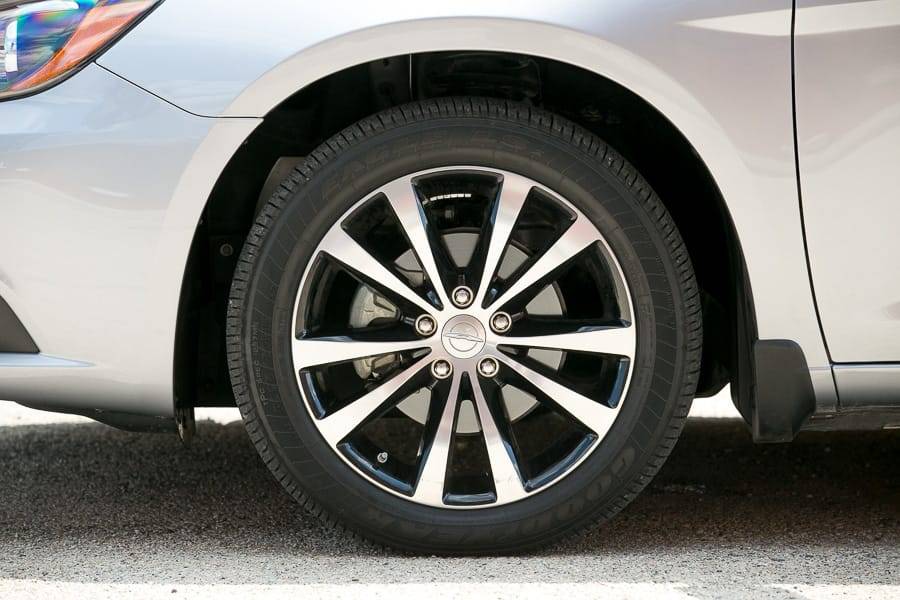 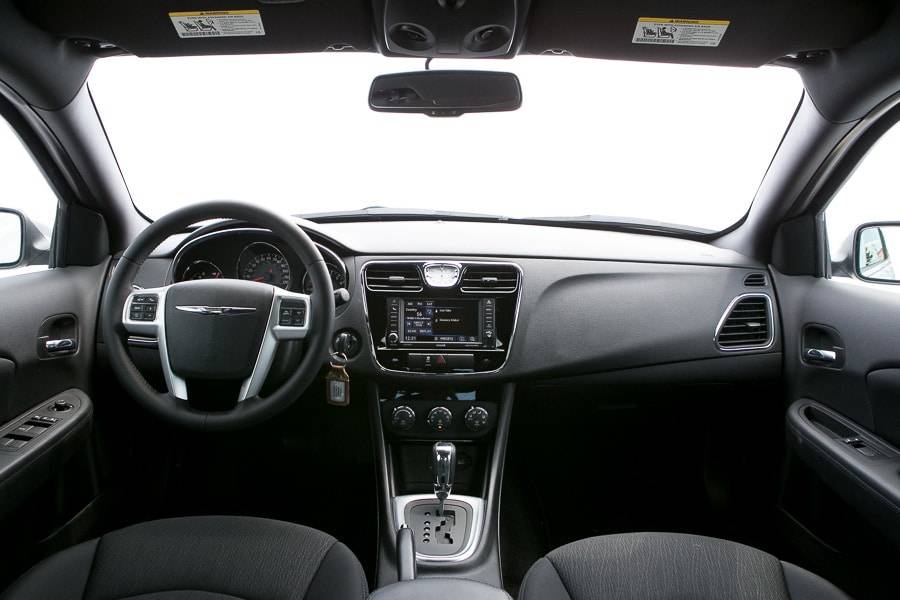 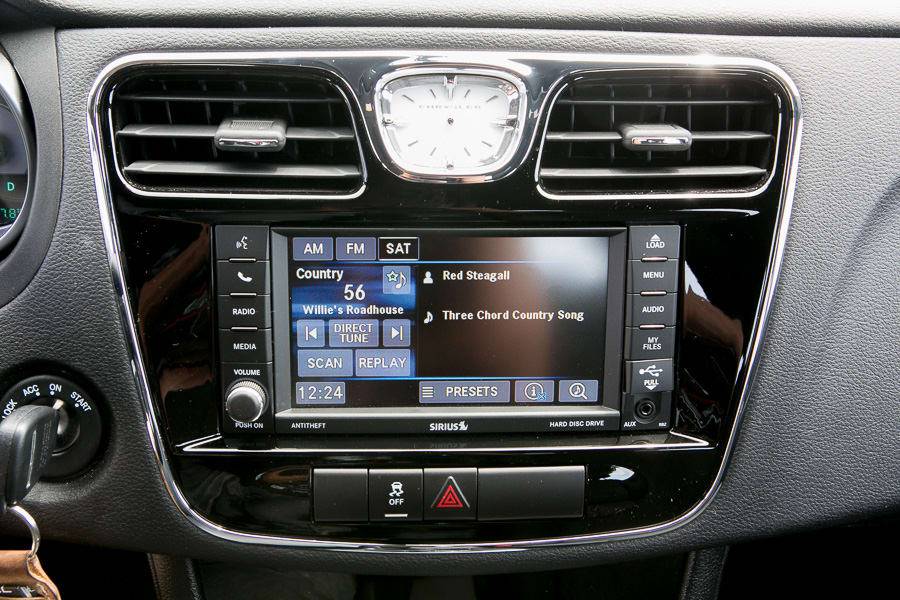 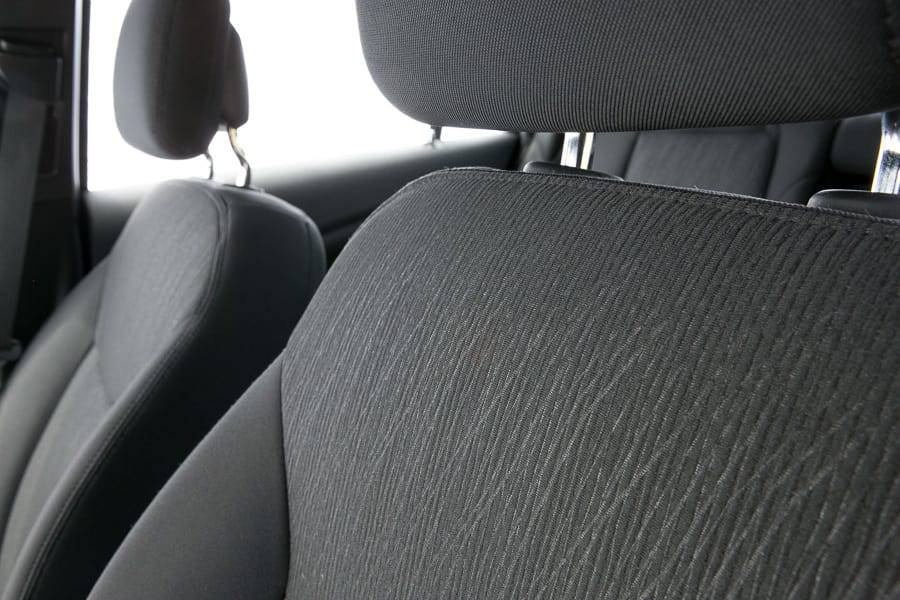 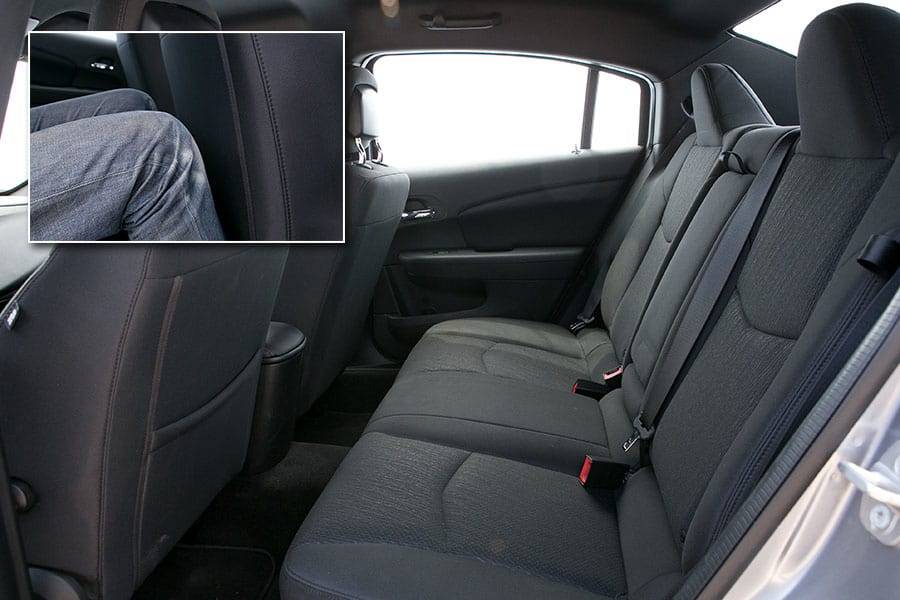 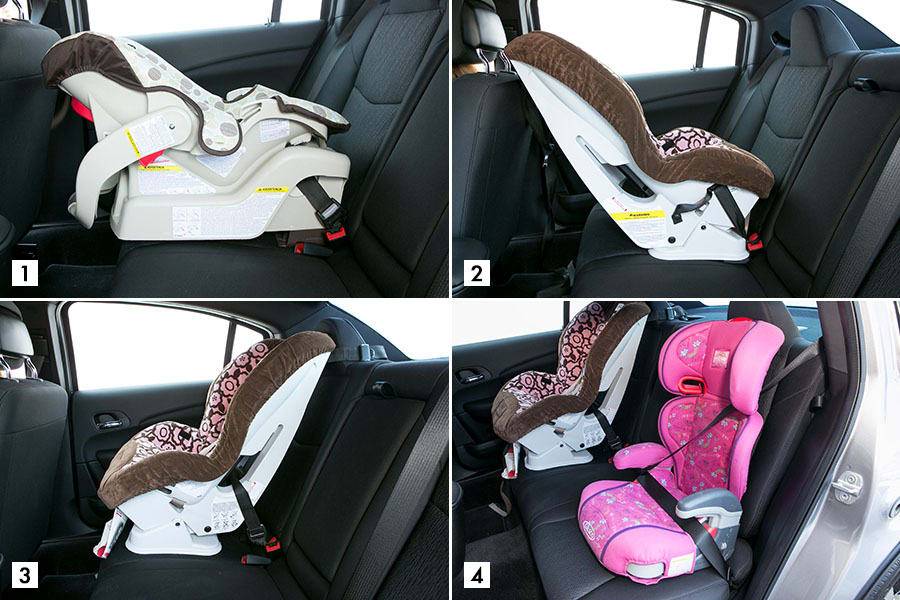 Editor’s note: This review was written in August 2013 about the 2013 Chrysler 200. Little of substance has changed with this year’s model. To see what’s new for 2014, click here, or check out a side-by-side comparison of the two model years.

There’s a hole in Chrysler’s lineup that the 200 midsize sedan just doesn’t fill. It offers none of the family-friendly versatility of the accomplished Town & Country minivan and even less of the classy comfort that oozes from the roomy 300 sedan.

In a class brimming with likable cars, the 2013 Chrysler 200’s polished looks and affordable price aren’t enough to overcome its shortcomings, which place it among the losers.

Competition in this class blows the 200 away, offering better room, fuel economy and features; strong players include the Honda Accord, Toyota Camry and Ford Fusion. Compare them here.

For 2013, sedan and convertible body styles — hardtop and soft-top — return; I reviewed the 2013 convertible, which received some suspension upgrades this year, here. The sedan carries over unchanged from 2012.

Style, But No Class
During my week in the 200, it got a lot of looks and I got a lot of comments; people think it’s attractive. I doubt Accord owners hear that too often. My test car was a Touring model with the S Appearance Package — where S should stand for style. Additional chrome trim and polished aluminum, plus black 18-inch wheels, add some bling; a blacked-out grille and darkened headlight and fog light bezels complete its smoky charm. Out back, LED taillights lend an elegant look that’s cheerfully incongruous with its $24,000 sticker price.

Inside, the cabin has finishes to match. No one will mistake this for a luxury car, but the interior is done well, and Chrysler’s attention to detail is evident. The tasteful analog clock, along with glossy black surfaces and chrome trim, blend well with the textured and padded plastic throughout; lightly patterned seats are visually interesting and also look and feel upscale.

The sore thumb here is the optional touch-screen multimedia system. The buttons are clear and response time is prompt, but the Uconnect unit’s 6.5-inch screen is small and dated compared with the competition, especially other Chrysler models. In the 300 and Dodge Dart, for example, the updated interface and larger 8.4-inch touch-screen are wonderful by comparison.

While the 200 looks and feels great standing still, the fondness fades after you put it in gear.

The Slow Lane
On the road, the 200’s bump absorption is good, as is noise isolation. Getting to where you want to go, however, will frustrate from start to stop. Driving the 200 is a lot like running under water; your legs are pumping, but you’re not really going anywhere. The base 173-horsepower, 2.4-liter four-cylinder just isn’t enough. Around town, acceleration was adequate with one occupant, but when the car was full (as it was during most of my test), the engine felt taxed from a stop and lethargic on the highway. Keeping up in the fast lane was exhausting, requiring constant pedal prodding. The optional engine is a 283-hp, 3.6-liter V-6, which moved the convertible with much more oomph.

The 2.4-liter never lets you forget it’s struggling, with a loud — not in a cool way — and near-constant buzzy whine. One of the main problems is that the engine and transmission need some couples counseling. The four-cylinder may be underpowered, but its complaints are valid: The six-speed is fussy and unpredictable. When it finally decides to downshift, it often clunks into gear. The shifts were so erratic that one editor thought a continuously variable automatic transmission might be to blame. An outmoded four-speed is the standard transmission, which we haven’t tested; I shudder to think about its effects on the already dismal acceleration.

With moves like a tortoise, stellar fuel economy should be a consolation prize, right? Wrong. The four-cylinder/six-speed combo is EPA rated at 20/31/23 mpg city/highway/combined, and it gets worse with the four-speed: 21/29/24 mpg. During 213 mostly highway miles, I averaged 23.0 mpg. Lousy, especially compared with the Honda Accord four-cylinder’s rating of 27/36 mpg city/highway; the Camry and Fusion also trounce it, with 25/35 mpg and 22/34 mpg, respectively.

The most troubling part isn’t the going, but the stopping. Initially, the brakes furnish smooth and strong stopping muscle, but then finish with several jarring pulses. I suppose once you realize the car will actually stop, you’ll get used to this quirk, but it does not inspire confidence.

Room & Comfort
The seats in front and back are comfortable, with ample cushioning and support. Most occupants won’t feel cramped in the front, but those looking for a roomy feel in back should shop elsewhere. By the numbers, front headroom and legroom are ample and competitive, but the backseat is one of the smallest in the group. With just 36.2 inches of rear legroom, the 200 lags the competition by about 2 inches.

It’s also short on cargo room. Although the trunk was able to swallow almost a week’s worth of luggage for five people (after some Tetris-like choreography), there’s just 13.6 cubic feet of space, much less than the Accord (15.8), Camry (15.4) and Fusion (16.0).

The trunk itself has a low liftover and a large mouth, great for loading bulky packages. The backseat folds easily in a 60/40 split for longer items, but the load floor isn’t very flat. One nice bonus is the trunk pass-through, handy for accessing small items from the backseat or hauling long, slender cargo.

In terms of small item storage in the cabin, the two-tier center console is wide enough to be useful, and there’s a couple of small cubbies throughout the front seat for coins and devices. One small gripe: There’s no seatback pocket behind the front passenger seat, which is where I like to stash my toddler’s books. We both missed this small convenience.

Pricing & Value
Skin-deep style aside, the 200’s only other strength — and it’s a big one — is price. It starts at $20,690 (all prices cited include destination charges). That’s for the four-speed automatic, however; add $200 for the must-have six-speed. Four-cylinder, manual-equipped versions of the 2013 Honda Accord start at $22,470 (add $800 for a continuously variable automatic transmission), and the base Fusion is just above it at $22,695. A base Toyota Camry starts a bit higher at $23,045, but a six-speed automatic is standard.

Options are also reasonably priced. For example, navigation is available on higher 200 trim levels for $795; it starts at $1,050 on the Camry. Leather upholstery in the 200 is $545 on midline Touring models and standard on higher trims; it’s part of a $1,599 package on most versions of the Camry.

Safety
In crash tests by the Insurance Institute for Highway Safety, the 2013 Chrysler 200 scored Good in roof strength and front-, side- and rear-impact tests. In the agency’s tough new small overlap front crash test, the 200, along with the Ford Fusion, earned an Acceptable score — better than the 2013 Toyota Camry’s Poor score in this test. The 2013 Honda Accord earned top scores across all areas of testing.

In National Highway Traffic Safety Administration testing, the 200 earned an overall score of four out of five stars; the Fusion, Accord and Camry all got five stars.

The 200’s safety features list is as outdated as its multimedia system. Standard features include the required airbags plus a driver-knee airbag, but you can’t get a backup camera (inexcusable) or a blind spot monitoring system. The Honda Accord offers a standard backup camera across the lineup, and one is optional on some four-cylinder versions of the Camry and standard on certain V-6 models; a camera is standard on top-of-the-line versions of the Ford Fusion and optional on some others.

Click here for a full list of Chrysler 200 safety features, and see why parents may have trouble installing child-safety seats in the Car Seat Check.

200 in the Market
So, if the 200 is such a dud, why are there so many on the road? It’s the homecoming king of rental fleet popularity, but in terms of consumer sales, it’s definitely not a member of the in crowd.

Cost aside, there’s simply no compelling reason to choose the 200 over just about anything else.