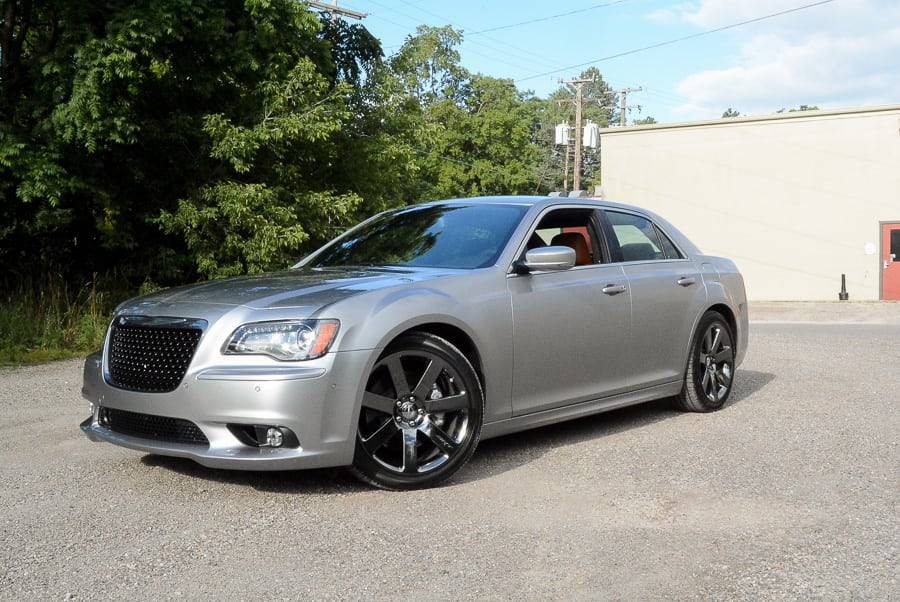 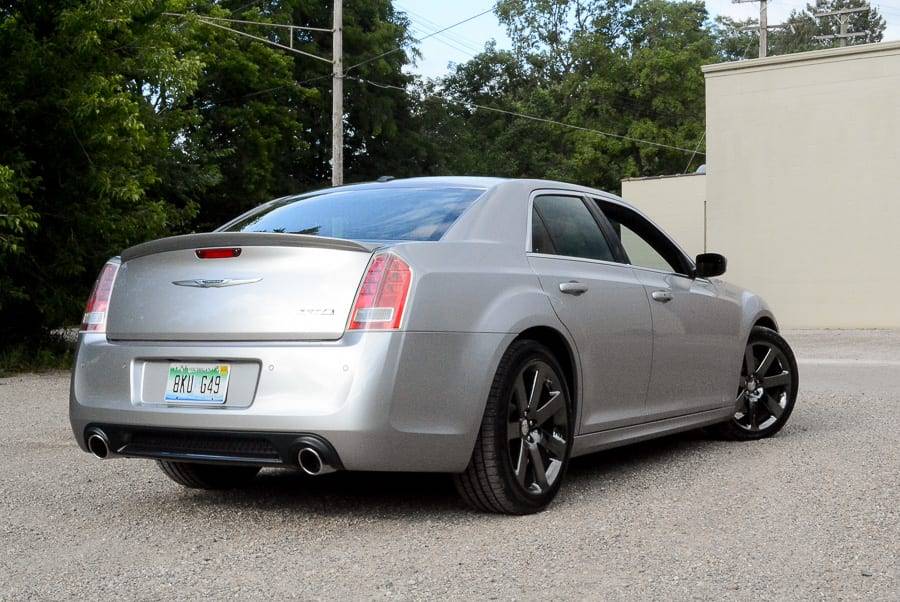 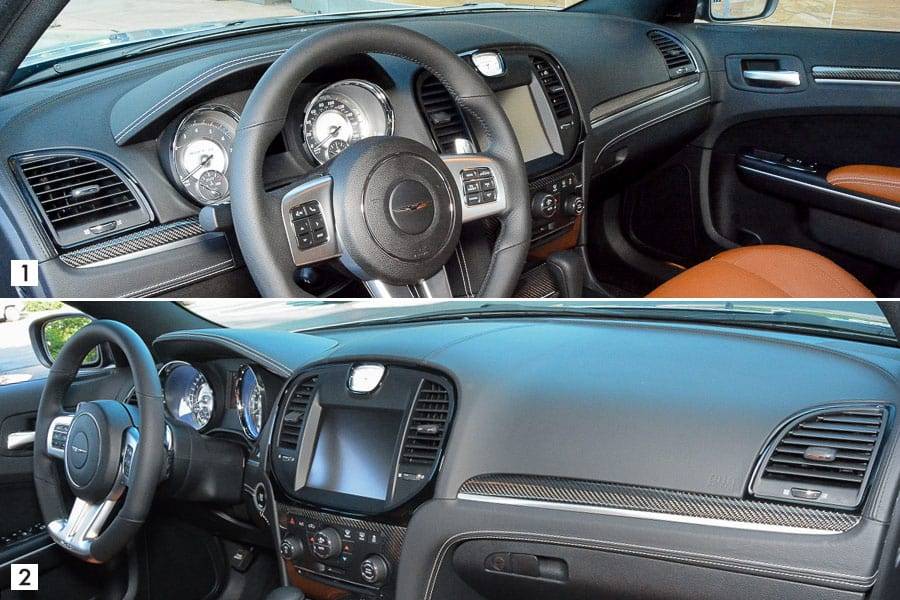 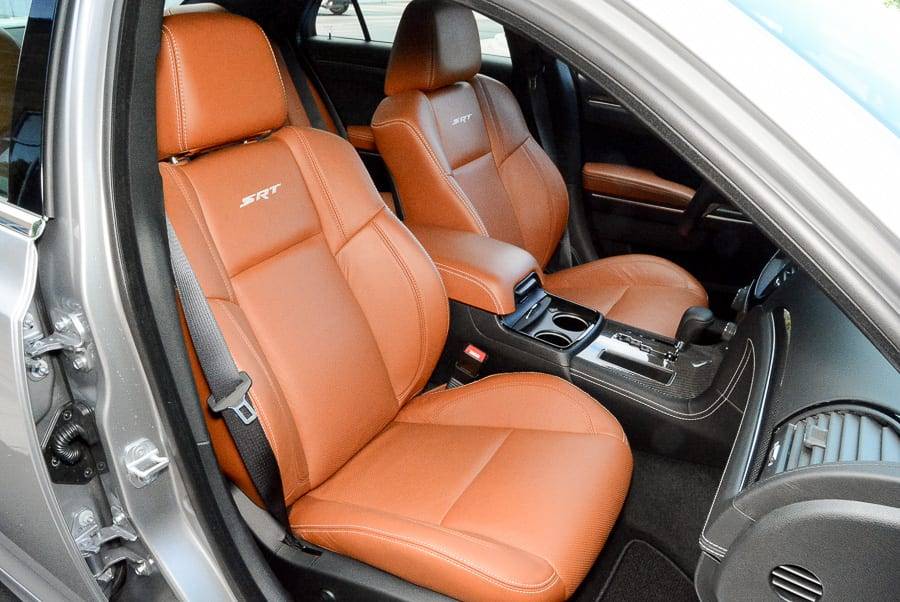 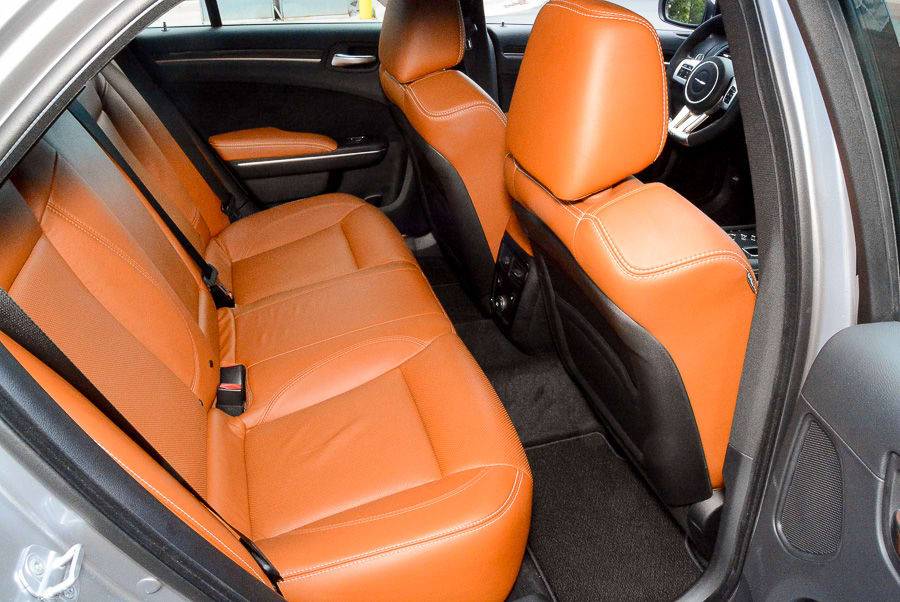 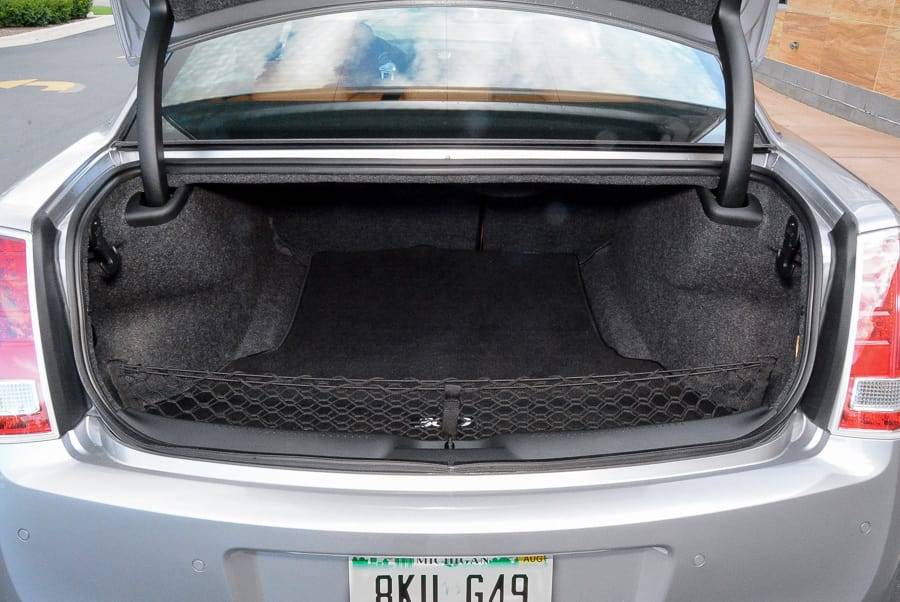 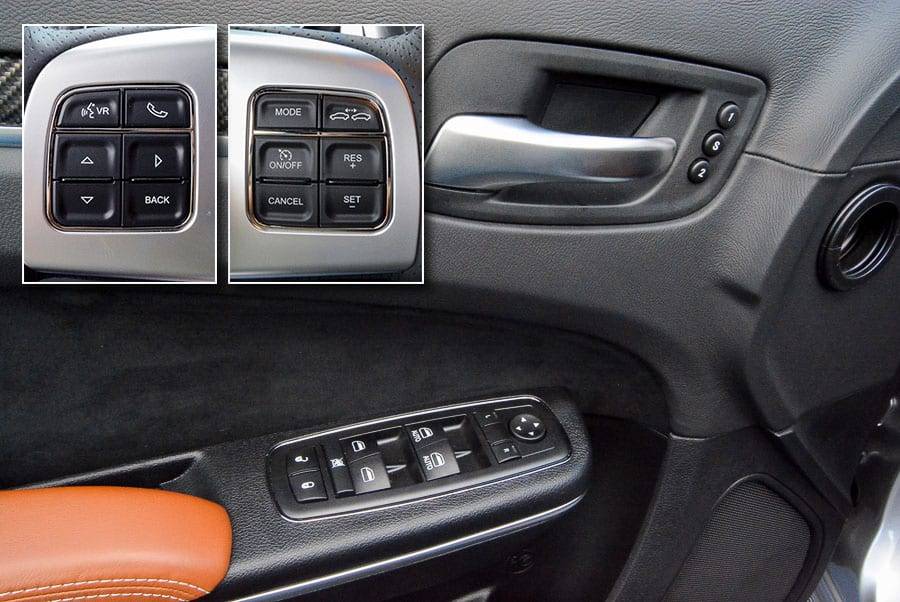 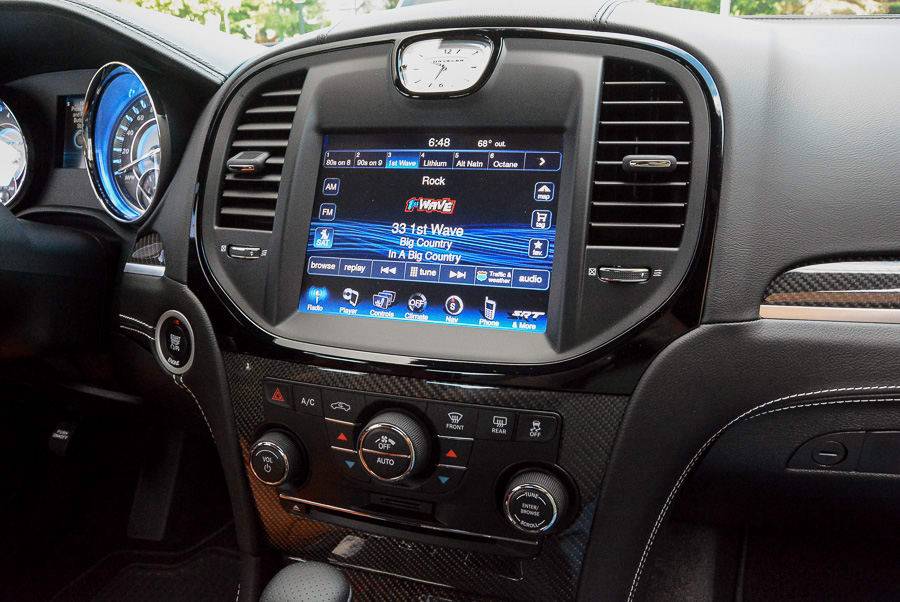 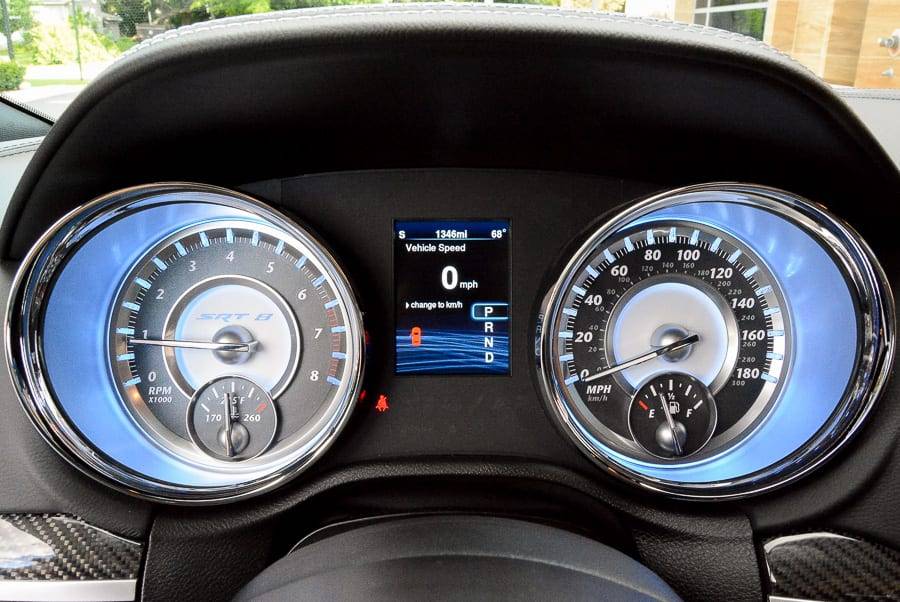 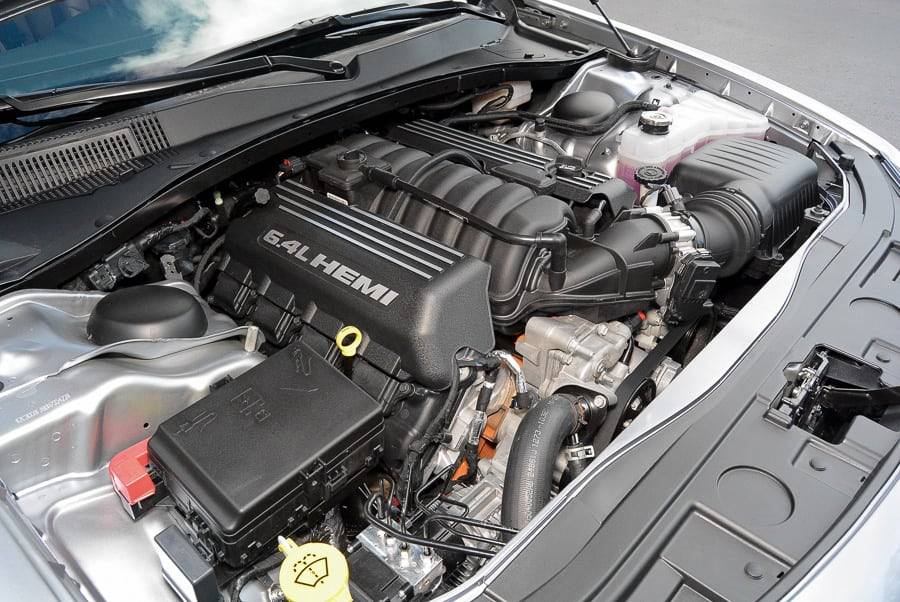 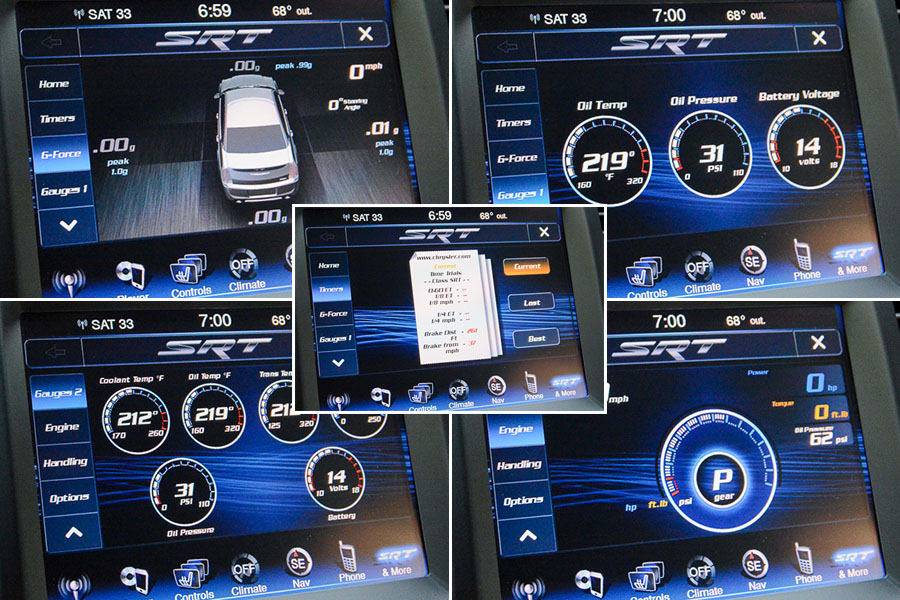 1/11
Long and low, the Chrysler 300 SRT8 maintains its gangster-mobile look, which is augmented by SRT-specific black chrome trim. | Toggle between photos using the right and left arrow keys. Cars.com photo by Evan Sears

Editor’s note: This review was written in September 2013 about the 2013 Chrysler 300 SRT8. Little of substance has changed with this year’s model. To see what’s new for 2014, click here, or check out a side-by-side comparison of the two model years.

Big, bold, and unapologetically bad-ass, the 2013 Chrysler 300 SRT8 is a rare and desirable breed — a wickedly powerful V-8 performance sedan that can be had for a relative bargain.

Many of my international friends would point to the 2013 Chrysler 300 SRT8 and sneer that it’s an American anachronism. It’s a full-size, rear-wheel-drive, five-passenger super-sedan with a massive V-8, enormous wheels, a primitive five-speed-automatic transmission and the visceral visual impact of an automatic weapon. Its fuel economy is so poor that you get to pay the federal government an extra $1,000 gas-guzzler tax for the privilege of buying one. But all it takes is one grin-generating stab of the go-pedal to make you realize your thousand clams were easily worth it.

For 2013, Chrysler has made some updates to the 300 SRT8. A new three-mode active damping suspension is standard, as is an electronic launch control function. A new base model, called SRT8 Core, has been added, lowering the price of entry even further but forgoing a lot of the more luxurious amenities, like leather seats. A new fuel-saving function has also been added to boost fuel economy. See the changes from model-year 2012 to 2013 here.

‘All Ate Up With Motor’
That’s how Darrell Waltrip referred to his car during his successful 1977 NASCAR season, and it applies just as well today when talking about the 300 SRT8. It’s no secret how the car is so quick: 6.4 liters of Hemi V-8 muscle nestled under a long and shapely hood, firing to life with a roar and settling into a surprisingly lumpy idle when the engine is cold. It’s a sensation that’s rare these days: the feeling of constrained capability, reined in most of the time but available in a heartbeat when called upon. This biggest of the Hemi V-8s makes 470 horsepower and 470 pounds-feet of tire-melting torque, channeled through a robust five-speed transmission. It catapults the car from zero to 60 mph in the high 4-second range and propels it to a top speed of 175 mph.

It’s easier than ever to get those numbers, too, thanks to the addition of launch control for 2013. Just like in the Jeep Grand Cherokee SRT, you can activate a system that uses the traction control system to help get the best times: Come to a stop, press the ESP (stability control) button twice, keep your left foot on the brake and floor the accelerator with your right. Quickly let your left foot slide off the brake pedal, and the 300 SRT8 launches you with a minimum of wheelspin at exactly the right RPM. It’s an insane amount of fun and not really something you can do in a Ford Taurus SHO.

It’s also impressively quiet on the highway, with only the rumble of the V-8 engine and the slap of the big tires getting through to your ears. The engine note is curious, however — when cylinder deactivation occurs at cruising speed, the sound emanating from the exhaust pipes noticeably changes. It’s not quite as seamless as in some other big V-8 cars; you definitely know when all the cylinders are not being used. Given that the SRT8 still only gets 14/23 mpg city/highway, one wonders if the addition of the fuel deactivation feature was worth it. It has, however, made a difference versus the previous engine in the 2010 model, which only got 13/19 mpg.

The weak link in the powertrain equation is the five-speed transmission. Unlike the eight-speed that’s now starting to populate the Chrysler lineup (and can be had with the 3.6-liter V-6 in lesser 300 sedans), the old workhorse five-speed is needed to handle all that power without fragging itself all over the street. The downside is that it’s abrupt, clunky and loud. It also features a manual mode complete with metal flappy-paddle shifters behind the steering wheel — but shifting an automatic transmission manually still strikes me as ridiculous, unless it’s some kind of advanced dual-clutch affair, which this one is most definitely not. Measured against what the car can do, however, you’ll quickly forget the transmission’s shortcomings.

The 300 is a big car, and it handles like a big car. No amount of electronic suspension trickery can hide that there’s a lot of mass to toss around. The ride is well-controlled and calm, despite the massive 20-inch tires; very little upsets the 300 SRT8 in terms of pavement quality. Despite the car’s heft, I found myself traveling at faster speeds than I thought possible through some of my favorite rural, twisty places. Sailing through corners with flat, level body motions is impressive in a vehicle this portly.

Still a Looker
It may feel portly, but it looks wicked cool. The 300’s last styling update was for the 2011 model year, but it still looks long, low and uniquely American. It has a gangster look to it, with a high belt line and smallish windows, but given the interior upgrades the chunky styling doesn’t feel overwhelming when you’re sitting in it.

Those material upgrades are even more pronounced on the SRT8 with the optional Laguna Leather Package and the Leather Interior Group. Seats get covered in thick, high-quality hides, while the dash, doors and other touch points also get covered in very nice cow. It lends an even more upscale air to the 300’s already impressively luxurious interior — one of the major areas upgraded in the 2011 refresh.

Seats are big and extremely comfortable, with multidirectional adjustability that accommodates even the biggest behinds. The fact that the seats are so large does tend to eat into some of the available interior space, however, especially in the backseat, where legroom is not quite as copious as one might imagine given the car’s exterior footprint. Further SRT touches include a unique squared-off steering wheel that just might be the biggest tiller I’ve ever gripped. The massiveness of it all feels appropriate, matching the big attitude of the car with big parts. Chrysler’s excellent Uconnect touch-screen with a navigation system is standard, and it remains the benchmark for multimedia systems and displays.

Safety
The 300 itself has been rated well by both the National Highway Traffic Safety Administration and the Insurance Institute for Highway Safety. It features multistage front airbags, seat-mounted side bags up front, and front and rear overhead curtain airbags. Traction control and a three-mode selectable electronic stability system are standard. Blind spot detection and rear cross-path warning are optional. See all the 300’s safety ratings here.

300 SRT8 in the Market
For what the 300 SRT8 can do, it’s a relative bargain; $50,445 including a $995 destination charge and the $1,000 gas-guzzler tax. A safety package with blind spot and cross-traffic detection, forward collision warning, and exterior mirrors with turn-signal repeaters adds $1,995. Choosing all the interior leather upgrades adds $1,495 for the Laguna Leather Package for the seats and another $2,500 for the Leather Interior Group, which puts leather on just about everything else inside the car. The Black Vapor Chrome Group brings black chrome 20-inch wheels and trim pieces for a reasonable $795. A fantastic 19-speaker Harman Kardon audio system upgrade costs $1,995, and summer tires run you $150, bringing the grand total to a lofty but not outrageous $59,375. See features and specs here.

Competitors are a little hard to come by, given this car’s capabilities and price, but they are out there. The Hyundai Genesis R-Spec matches up pretty closely, with its 429-hp, 5.0-liter V-8, sport-tuned suspension and similar sticker price. It doesn’t have the 300’s superior multimedia system or performance-oriented SRT apps, however, and it doesn’t handle nearly as well as the 300 SRT8. Chevrolet will introduce the new SS sedan in 2014, but the current GM competitor is the Cadillac CTS-V. It outguns the 300 SRT8 with a massive 556-hp, 6.2-liter V-8 and costs considerably more — more than $64,000 for a sedan. Lincoln offers a similarly priced product to the 300 SRT8 in its MKS EcoBoost model and adds the benefit of all-wheel drive, but its twin-turbo 3.5-liter EcoBoost V-6 comes up more than 100 hp short of the SRT8. See how the 300 SRT8 stacks up against competitors here.

Honestly, to do what this car can do in the same format and package, you almost have to go to the German luxury brands for more expensive offerings. The 300 SRT8 definitely isn’t for everyone, but the fact that it simply exists is cause for celebration.

Shop cars for sale near you Research cars Compare vehicles
How Should I Prep My Car for Sale to a Dealer?
May 17, 2022
2023 Cadillac Lyriq: Orders Open May 19, Price Creeps Up
May 16, 2022
2023 Toyota Camry Nightshade Special Edition Brings New Wheels, Paint Color
May 16, 2022
See all latest news