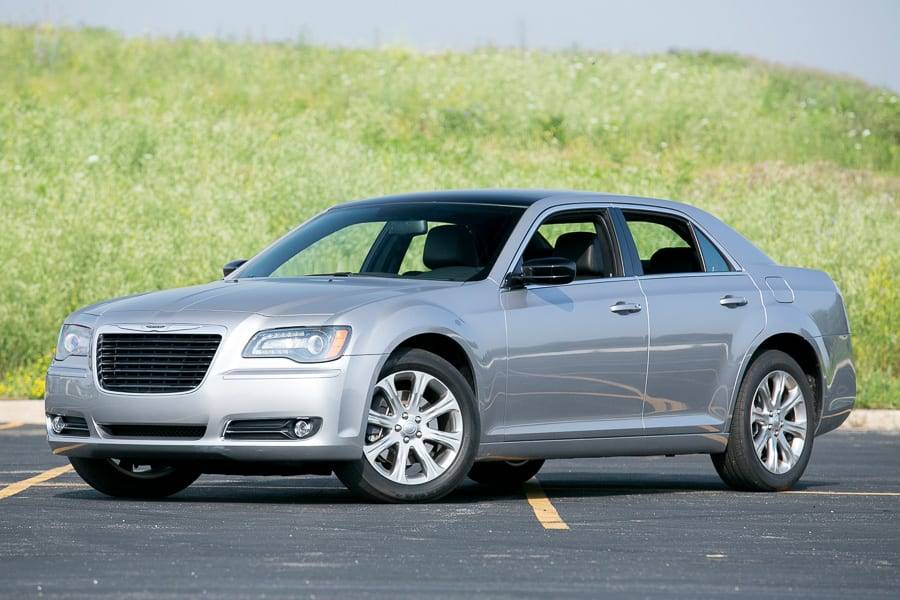 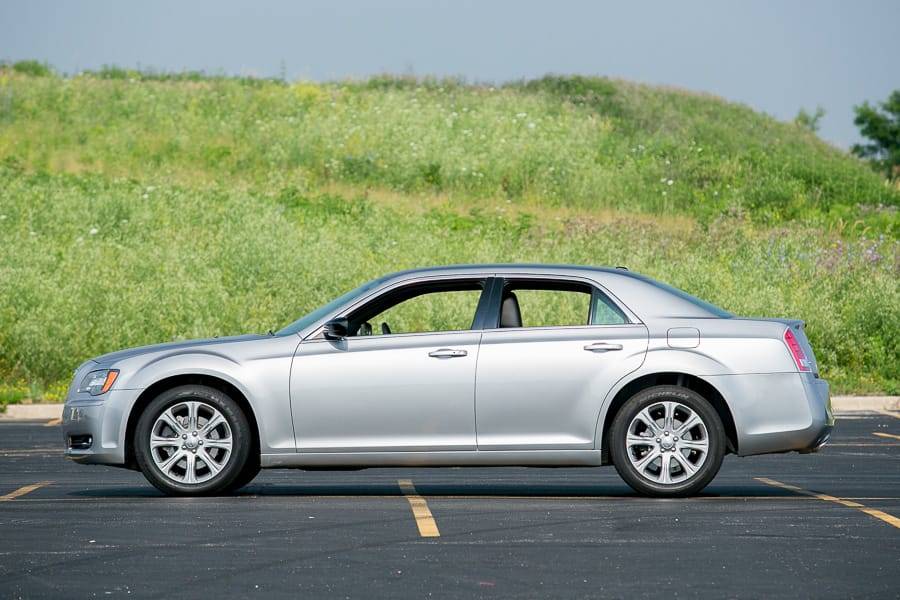 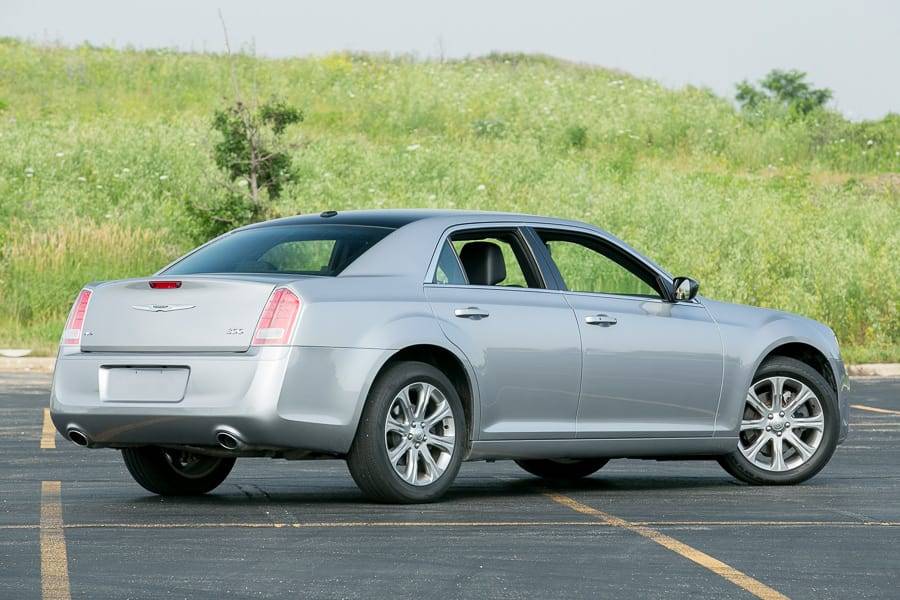 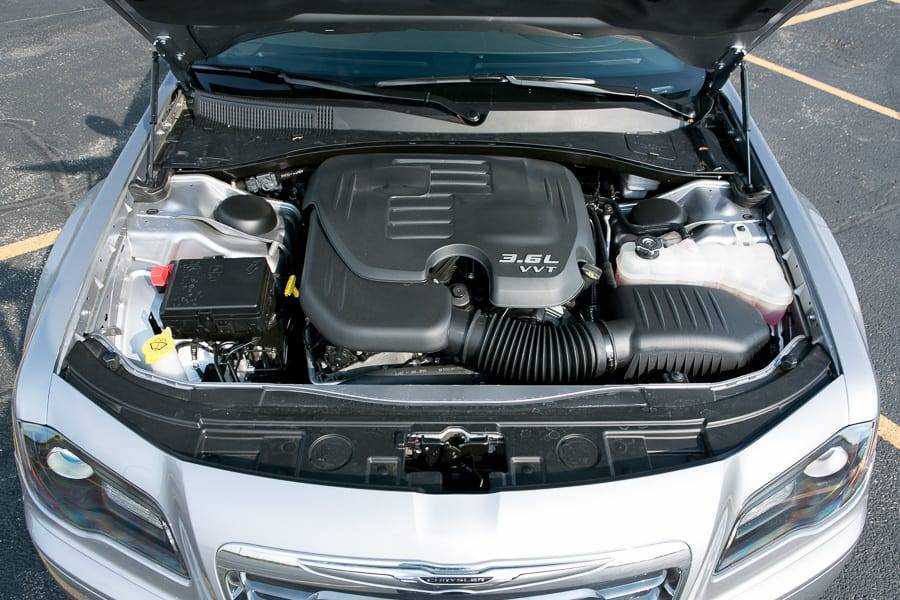 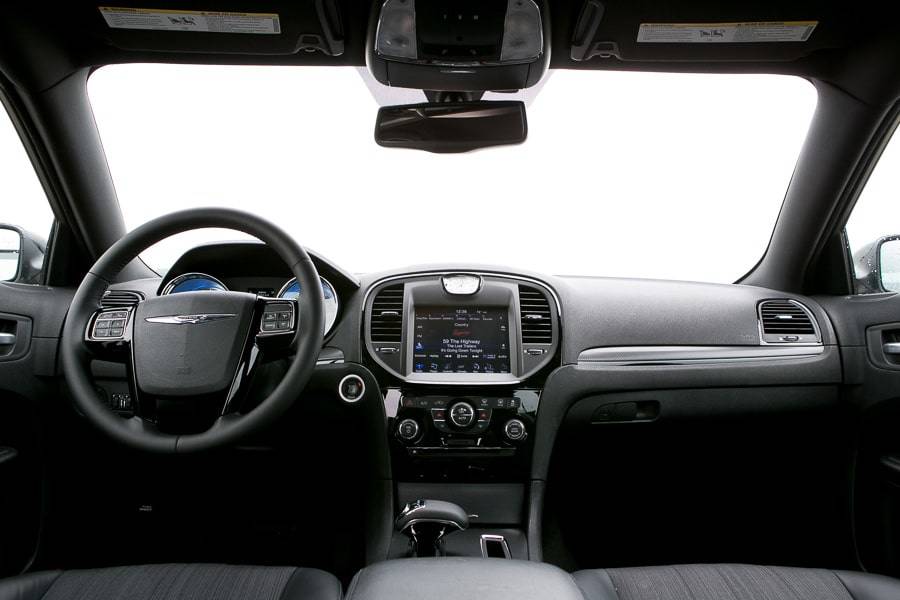 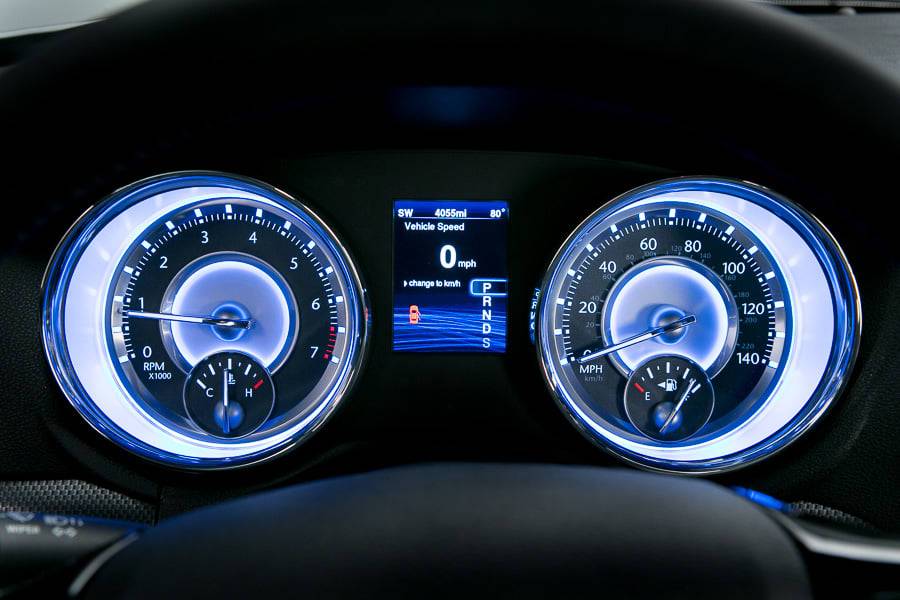 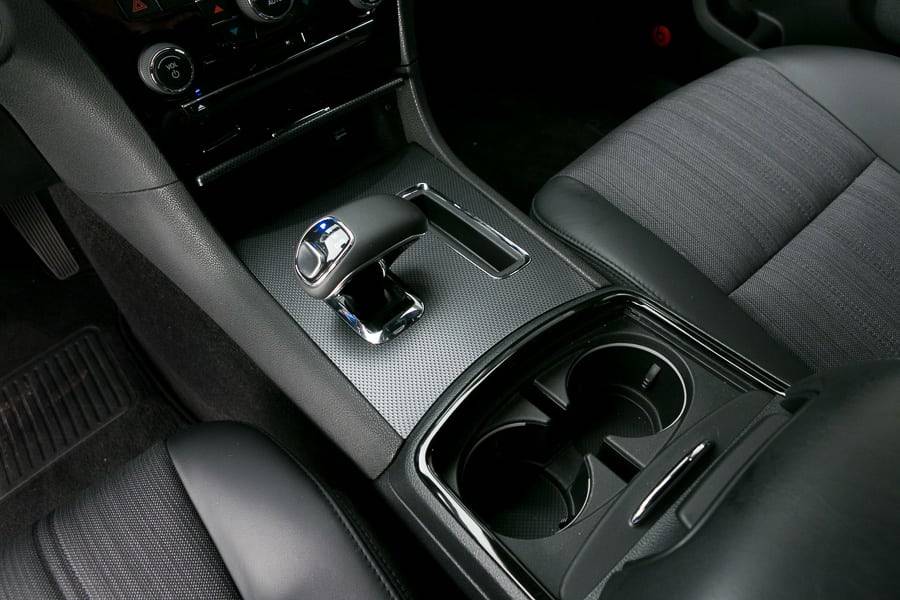 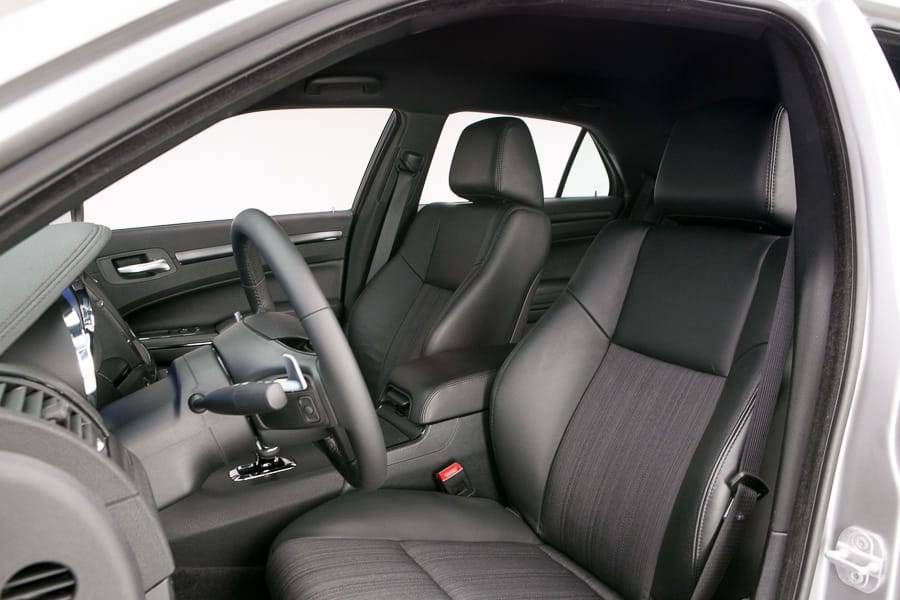 1/11
The Chrysler 300 lost some of its brashness but gained a more mature look when it was restyled for 2011. The Glacier Edition (shown) adds gloss-black mirror caps, darkened headlight trim, black chrome grille blades and special 19-inch aluminum wheels. For | Cars.com photo by Evan Sears

Editor’s note: This review was written in August 2013 about the 2013 Chrysler 300. Little of substance has changed with this year’s model. To see what’s new for 2014, click here, or check out a side-by-side comparison of the two model years.

The 2013 Chrysler 300 may not be as brash as its predecessor, but its mix of quietness, comfort and highway composure makes it an ideal road-trip car.

The base Chrysler 300 with rear-wheel drive and a V-6 engine starts at $31,340, including a $995 destination charge. All-wheel drive is available, as is a V-8 engine. Our test car was the 300S Glacier Edition, a new version for 2013 that features unique exterior and interior styling as well as all-wheel drive. Its as-tested price was $40,335. To see the Chrysler 300’s specs compared with the Chevrolet Impala, Ford Taurus and Toyota Avalon, click here.

More Mature Styling
Chrysler shocked the automotive world when the first-generation 300 debuted as a 2005 model, and the car’s bold design made it an instant hit. The current design first appeared for 2011, and while it lost some of its predecessor’s in-your-face attitude, it gained a more mature, sophisticated appearance befitting a car with luxury aspirations. The original 300’s cool-factor might be long gone, but this is a design that still has a lot of street presence and will wear well for years to come.

One of the car’s signature features is its standard LED daytime running lights, which form the shape of a C in the headlight assembly. I like the accenting quite a bit, as it adds to the car’s distinctiveness.

Ride & Handling
Chrysler has found a nearly ideal equilibrium with this car’s suspension tuning, as the 300 manages to provide a comfortable ride without devolving into a wallowing driving experience that lacks composure. The sedan’s long, 120.2-inch wheelbase deserves some of the credit for the refined ride quality, but the suspension handles bumps well, too, with refined reactions, though you still feel road imperfections. The ride isn’t soft like full-size cars were a few decades ago, but by modern standards it’s comfortable.

Perhaps the 300’s best attribute is its highway manners. This is a car that tracks confidently and doesn’t ask the driver to constantly make small steering corrections. This, in turn, makes the driving experience less fatiguing. More than anywhere else, the 300 feels at home racking up miles on the highway.

While it’s a great highway companion, the 300 does not enjoy being tossed into tight curves at speed. It’ll handle the task reasonably well, with limited body roll that would show up some smaller cars, but it never feels like a small car, and you get the sense that if the 300 could ask you one thing, it would be: “What are you doing?”

Going & Stopping
The pairing of Chrysler’s eight-speed automatic transmission with its 3.6-liter V-6 engine produces impressive performance. Though not always the case, this is one of those times when extra gears really do make a difference in the real world. The 300 moves out well from a standing start and the automatic helps keep the engine in its power band, which is helpful when merging with fast-moving highway traffic. Shifts are smooth and unobtrusive when cruising from stoplight to stoplight.

While the transmission delivers exceptionally quick part-throttle kickdowns, when you mash the gas pedal to the floor it takes its time dropping down through the gears. It gets to the right gear after a few seconds, but the delay isn’t ideal because it occurs when you’ve indicated that you need to accelerate immediately.

Like all 300S models, the Glacier Edition’s V-6 is rated at 300 horsepower. That’s 8 hp more than the base V-6 thanks to a sport exhaust and cold-air induction. It’s a strong engine, and I didn’t miss the available Hemi V-8 at all. High praise, and it’s deserved thanks to good off-the-line quickness and reserve power for high-speed passing.

The 300 and its sibling, the Dodge Charger, are tied with the Toyota Avalon for the best highway gas mileage estimates among mainstream, V-6-powered full-size sedans with two-wheel drive. The cars get an EPA-estimated 31 mpg on the highway, but the Avalon gets 2 mpg better in city driving — 21 mpg to the 300’s 19 mpg. Choose all-wheel drive like our test car, however, and the EPA estimates fall to 18/27 mpg city/highway.

The 300’s brake-pedal feel could be better. As it is, it’s a bit spongy, as if a marshmallow were stuck between your shoe and the pedal. Braking response is reasonably linear, but more direct pedal feel would be welcome.

The Inside
The 300’s dashboard doesn’t incorporate a lot of frills, and its controls are concentrated in an area just in front of the eight-speed automatic’s electronic gear selector. All trim levels get Chrysler’s Uconnect 8.4 entertainment system, which features an 8.4-inch touch-screen, an SD card reader, Bluetooth streaming audio, an MP3 jack and iPod connectivity. Our test car had the optional Uconnect 8.4N, which adds a Garmin-based navigation system to the setup for $995.

The Uconnect system manages the stereo, climate system and more through the dashboard touch-screen. It’s one of the most user-friendly multimedia systems available today thanks to its intuitive onscreen menus with large icons and snappy processing speed, making switching between menus nearly lag-free; there’s no waiting around for the computer like there is with Ford’s MyFord Touch, a competing touch-screen interface.

There’s good space for adult passengers in the front and outer rear seats. Glacier Edition versions get seats finished in cloth with leather bolsters. One editor thought the driver’s backrest was especially hard.

The thing about the backseat, however, is that it might make your passengers feel claustrophobic. While there’s lots of legroom for outer-seat passengers and it’s a comfortable place to sit, the roofline and C-pillar intrude on the view out the side window more than in most full-size cars. The hump in the middle of the floor is especially tall, too, limiting center-passenger foot space.

As for the electronic gear selector, I’m not a fan. It’s simple, really: It never seemed to go into the gear I wanted on the first try. There aren’t any of the usual detents to indicate Drive or Reverse by feel alone, and it’s doubly annoying because Chrysler had a great gated gearshift that it ditched in favor of this. Sometimes supposed progress is really a step backward.

Safety
The Chrysler 300 has been designated a 2013 Top Safety Pick by the Insurance Institute for Highway Safety and received the highest overall rating, five stars, from the National Highway Traffic Safety Administration.

Standard safety features include side-impact airbags for the front seats, side curtain airbags for both rows of seats and a driver’s knee airbag. Antilock brakes, an electronic stability system and traction control are also standard.

For a full list of safety features, check out the Features & Specs page. To find out how well child-safety seats fit in the 300 see the Car Seat Check.

300 in the Market
Full-size sedans once ruled the day but have fallen far from favor in recent years. Today, though, the segment is experiencing a rejuvenation of sorts, with familiar nameplates like the Chevrolet Impala and Toyota Avalon getting full redesigns while newcomers like the Kia Cadenza aim for a piece of the action. While the competition is strong — and getting stronger — the Chrysler 300’s comfort and refinement, along with easy-to-use tech features, set it apart. The car is yet more evidence that Chrysler’s newfound product focus is paying off.