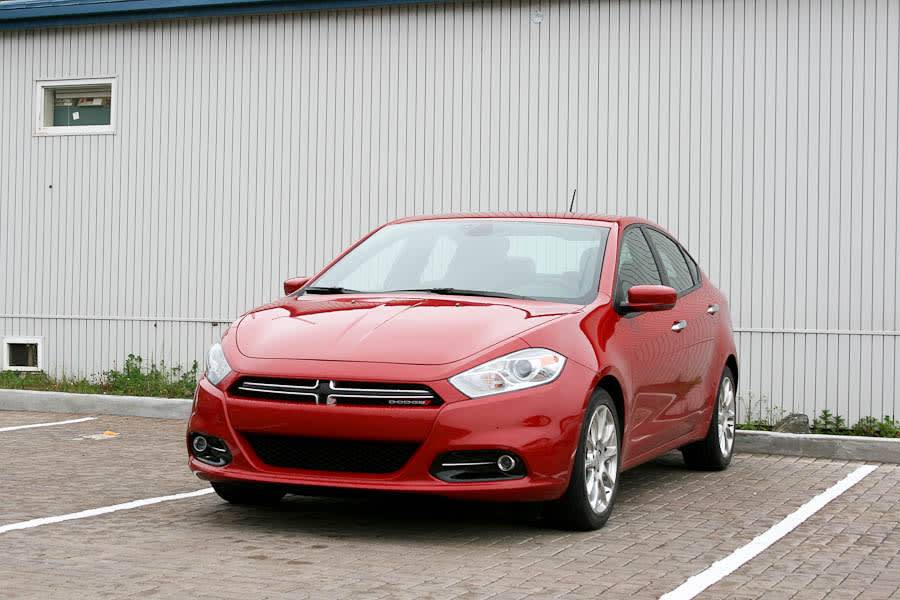 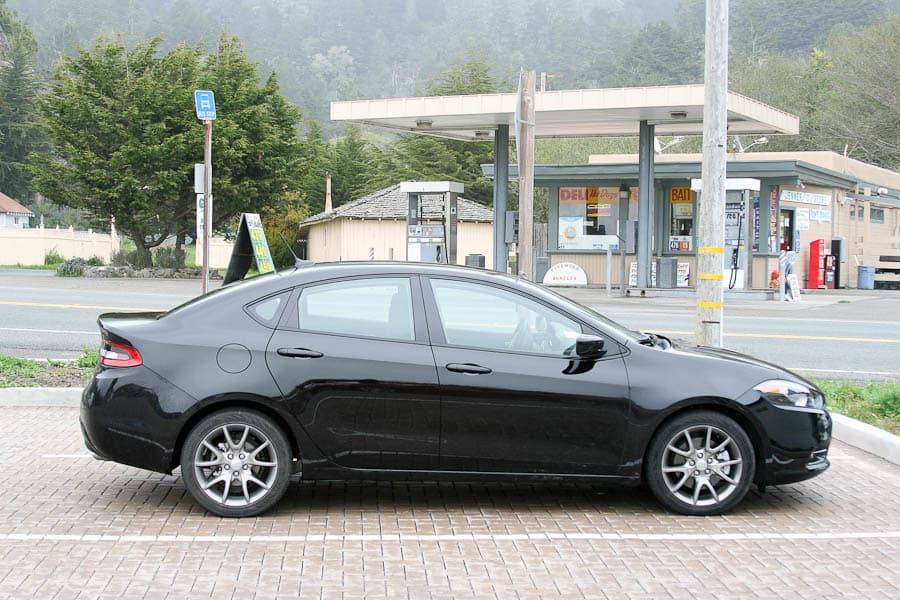 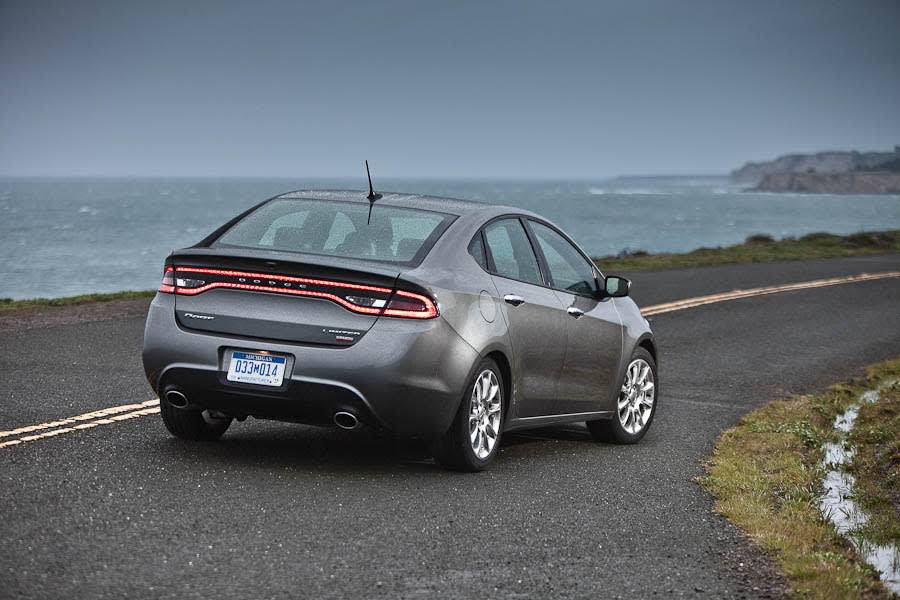 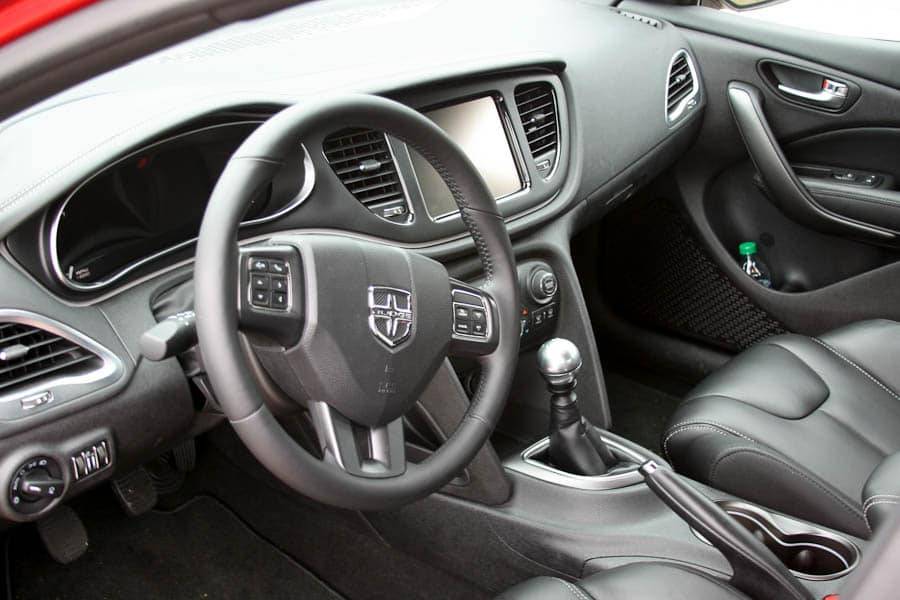 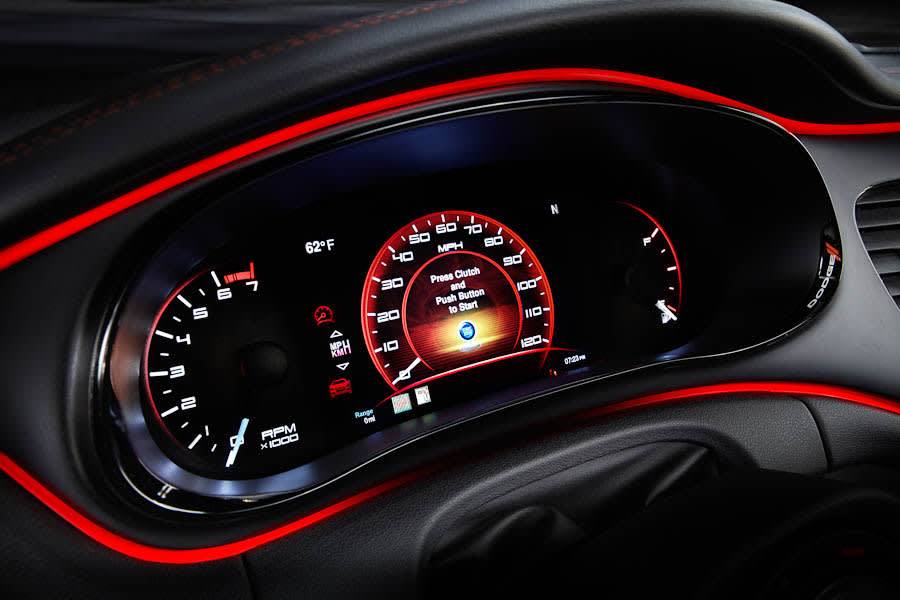 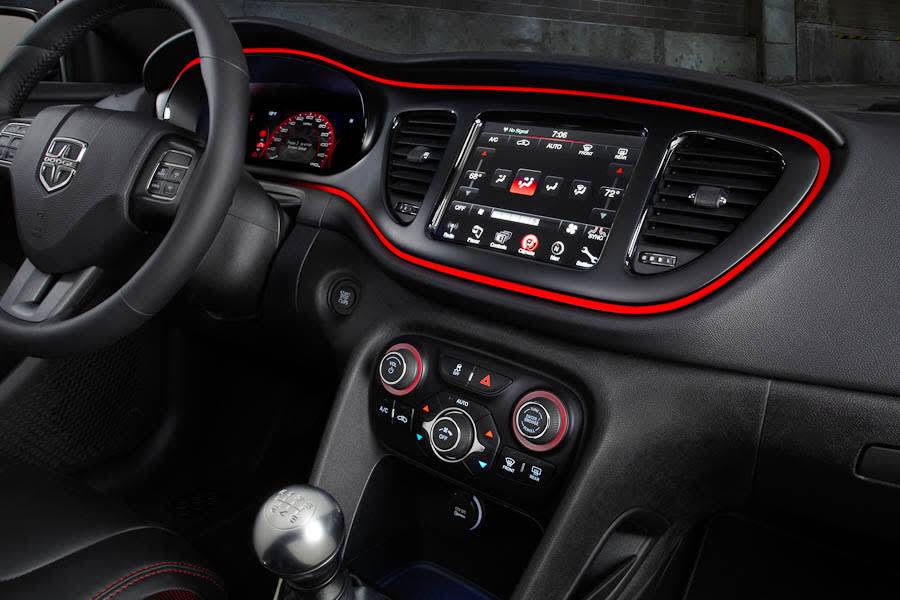 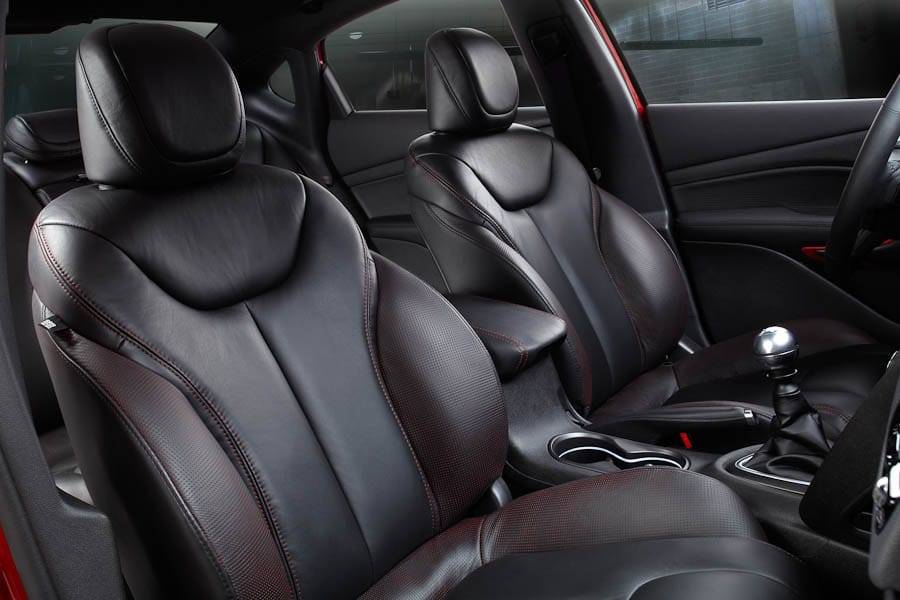 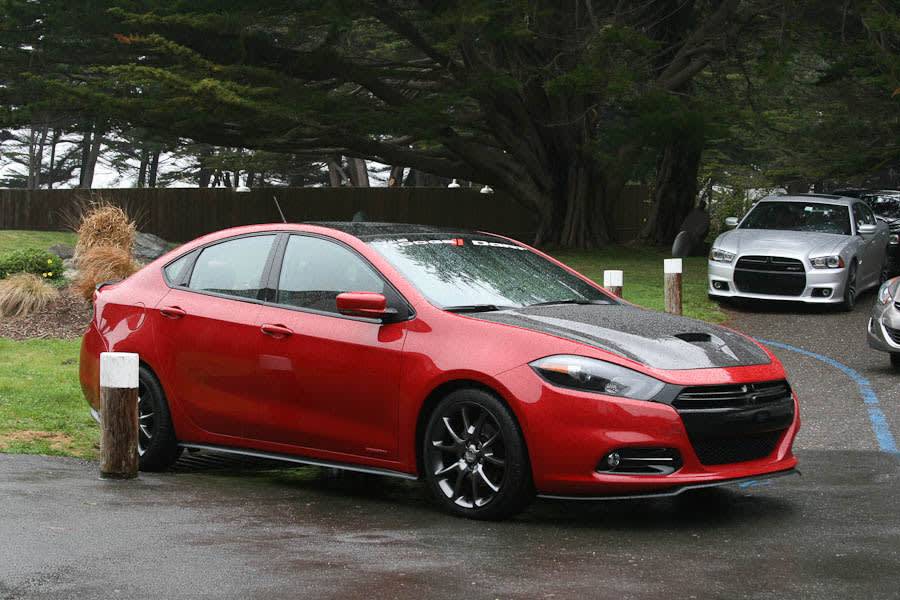 1/8
The Dart gets a slender interpretation of Dodge&#39;s familiar crosshair grille, and on the Limited trim (shown) it&#39;s accented in chrome. The Limited has a body-colored front end, but the Rallye trim has a front bumper with gloss-black accents. | Toggle between photos using the right and left arrow keys. Cars.com photo by Mike Hanley

Editor’s note: This review was written in March 2013 about the 2013 Dodge Dart. Little of substance has changed with this year’s model. To see what’s new for 2014, click here, or check out a side-by-side comparison of the two model years.

There’s been a gaping hole in the Dodge lineup: the lack of a compact sedan since the Neon departed after the 2005 model year. With American preferences for sedans over hatchbacks, the Neon’s successor, the Caliber, was never a suitable replacement.

Dodge finally has one in the 2013 Dart, a sedan with Alfa Romeo origins and a name from the ’60s. It’s the first Chrysler Group product based on a platform from owner Fiat (Alfa Romeo is a Fiat brand), and with the compact-car segment on the rise as shoppers look for relief from high gas prices, the Dart couldn’t come at a better time.

The 2013 Dart is an athletic, refined and highly customizable sedan that gives Dodge some much-needed respect in the compact-car market. The brand set its sights on the class leaders, and it hit the bull’s-eye.

Styling
The Dart’s exterior styling represents a new direction for the brand. There are familiar cues, like a version of the Dodge crosshair grille and available “racetrack” LED taillights like the Charger, but the Dart trades the angular, muscular lines of the Charger and Avenger for a look that’s more lithe and svelte. “We wanted it to be aero dramatic,” said Joe Dehner, head of Dodge and Ram exterior design. Designers also incorporated small flying buttresses into the sedan’s rear roof pillars, a design cue from Dodge’s past.

The sedan’s sibling is the Alfa Romeo Giulietta that’s sold in Europe, but for Dart duty the platform was widened and lengthened. It’s a well-proportioned sedan overall, and flared front and rear fenders accentuate its stance.

Euro Roots Influence Ride & Handling
A day spent driving the Dart on the winding roads of Northern California revealed a car with taut reflexes and a willingness to attack corners. Chief Engineer Mike Merlo said softer suspension tuning was introduced to suit American tastes, but it’s still firm for the class. Long stretches of smooth blacktop highlighted the suspension’s ability to control body roll and the Dart’s premium-car responses, but every once in a while a rough patch of pavement quickly reminded how firm the tuning remains.

It was in these moments, as images of Chicago’s cratered roads wisped around in the back of my mind, when I began to wonder whether Dodge should have softened the ride even further. As it stands, the setup’s firmness is similar to that of the Ford Focus.

Steering tuning is a critical factor in how engaging a car is to drive, and compact cars vary widely. The Dart’s steering wheel feels weightier than most, but this doesn’t translate to the desired steering feedback. The Focus provides a better sense of what’s happening at the tires than the Dart, whose steering has limited feel and less immediate turn-in. On the highway, the Dart settles nicely and tracks confidently without asking you to make constant steering corrections.

Four-Cylinder Power
After driving two of the Dart’s three engines, the biggest takeaway is that price-conscious shoppers who choose a lower trim with the base 160-horsepower, 2.0-liter four-cylinder will still get a refined powertrain that offers decent performance and gas mileage.

The 2.0-liter engine revs smoothly throughout its range and moves the Dart smartly whether equipped with the six-speed manual or the six-speed automatic transmission. Power, not surprisingly, tapers off at higher speeds, and at 60 mph there’s little left for a last-minute pass around slower-moving traffic. You have to plan your move with care.

Even more impressive than the 2.0-liter’s refinement — it is impressive in light of some of Chrysler’s recent four-cylinder engines — is the available Powertech automatic transmission and its ability to click off refined upshifts without an appreciable delay in power delivery. It feels similar to a dual-clutch transmission, which will be offered in the turbocharged Dart. Coupled with the console gear selector’s clutchless-manual mode that’s responsive enough to make it engaging — not the norm with these systems — the automatic is appealing.

The automatic’s one deficiency is a tendency to upshift into a higher gear than necessary. This might be good for fuel economy, but it can sap the engine of power when leaving a turn just when you’re getting back on the gas. Holding the transmission in 3rd gear with the manual mode took care of the problem, but a modern automatic shouldn’t need the driver’s intervention.

The midlevel engine is a turbocharged 1.4-liter four-cylinder that comes from Fiat and also powers the Fiat 500 Abarth. Like the 2.0-liter engine, it’s rated at 160 hp, but with its higher torque — 184 versus 145 pounds-feet — the turbo four-cylinder pulls harder than the base engine when you get in the higher part of the rev range. Like the 2.0-liter, the turbo four-cylinder bogs down if you’re not diligent about keeping it in the proper gear; there’s just not much power below 2,000 rpm.

The turbo engine works with a six-speed manual or a dual-clutch automatic transmission. The manual shifter has longish throws, and shift feel is a little vague. The shifting experience is more akin to a Mini Cooper’s rather than the slick, precise movement of a manual Mazda3.

Outside the car, the turbocharged engine’s exhaust note surprised me; it has a raspy burble worthy of Chrysler’s SRT performance brand. The sound is much more muted from the driver’s seat.

All of the engines can run on regular gas, though the turbo four-cylinder prefers premium for maximum performance. As of this writing, EPA gas mileage estimates have been released only for select powertrains. The manual-transmission, turbo four-cylinder Dart is rated at 27/39 mpg city/highway while the 2.0-liter engine gets an estimated 25/36 mpg with a manual. Dodge expects a fuel-economy-focused Aero version of the turbocharged Dart to get an EPA estimate of at least 41 mpg on the highway. Chevrolet and Ford follow a similar strategy with the Cruze Eco (42 mpg) and Focus SFE (40 mpg), respectively, while all versions of the Hyundai Elantra are rated at 40 mpg on the highway.

Interior Quality & Comfort
The Dart continues Chrysler’s renewed emphasis on interior quality with things like a standard soft-touch dashboard that would have been unimaginable in a Dodge in this class a few years ago. The upper edge of the doors can be optionally finished in a padded surface as opposed to hard plastic, but I’d take the opposite — a hard plastic dash and standard padded door uppers because you might actually want to rest your arm on the door. Overall, materials quality is similar to what the Cruze and Focus offer.

All Dart trim levels have the same type of front bucket seats, but they can be covered in a number of different materials including cloth, leather or two-tone leather. The seat cushion provides good thigh support for taller drivers, and the backrest is wide. I preferred the cloth seats overall; they didn’t feel as stuffed as the leather ones. The Dart also offers heated cloth seats — a rare feature in any segment. A tilt/telescoping steering wheel helps you find an optimal driving position, but if you like to drive with the steering wheel set low, you might find it doesn’t tilt far enough down.

The Dart’s cabin volume of 97.2 cubic feet approaches that of some midsize cars, including Dodge’s own Avenger. Even so, the backseat — though passable for a 6-foot-1 passenger like me — doesn’t feel as roomy as the Honda Civic’s, which has a little less passenger volume overall. The Dart’s rear-seat backrest is reclined quite a bit — nearly too much.

Personalization & Premium Amenities
One of the Dart’s defining qualities is personalization. At a time when other automakers are reducing the number of build combinations available, to make picking a model easier on the consumer as well as to reduce the complexity for the manufacturing group, Dodge has gone in the opposite direction: There are 12 exterior colors, 14 interior colors and more than 150 individually available Mopar accessories. All in all, there are more than 100,000 possible combinations.

Why the different approach? The brand thinks compact-car buyers — a big chunk of whom are members of the increasingly significant Millennial generation — want this level of personalization. Dodge says it will take up to 60 days for a special-ordered Dart to arrive at a dealer.

The Dart also offers a host of premium features. These include Chrysler’s 8.4-inch Uconnect Touch with Garmin-based navigation. It’s a competitor to MyFord Touch, which is available in the Focus, but I prefer the Uconnect system’s simpler controls and quick-to-respond interface. There’s also an optional heated steering wheel and an optional 7-inch full-color reconfigurable instrument display. The screen has digital and analog speedometer views, a navigation guidance mode and can show audio information, among other things.

Safety
Standard safety features include 10 airbags, including side curtain airbags. There are also antilock brakes and an electronic stability system, which are required on all new cars beginning with 2012 models. Rear cross-path detection, a blind spot warning system and a backup camera are available.

Dart in the Market
The past few years have seen a reshaping of the compact-car segment with the debut of new models and redesigns of familiar ones. There aren’t many duds left, so it’s going to take some convincing for shoppers to give the Dart a look. Those who do will like what they find, as the Dart adds the style and attitude that have been in short supply lately.

The Dart, however, is missing one thing that’s a huge factor in this class: a solid reliability history. As an all-new model, the Dart doesn’t have a track record yet, and it’s going to be a while before we know how it compares with other models.

Chrysler’s track record is troubled, as evidenced by J.D. Power and Associates’ 2012 Vehicle Dependability Study. Of the brands represented in the survey, Chrysler’s four nameplates ranked at the bottom, with the most problems per 100 vehicles. Vehicles surveyed were from the 2009 model year, however, and the recently redesigned Jeep Grand Cherokee achieved Recommended status from Consumer Reports.

Improved reliability would bode well for the new Dart, which is an otherwise thoughtfully executed car designed to exceed expectations.