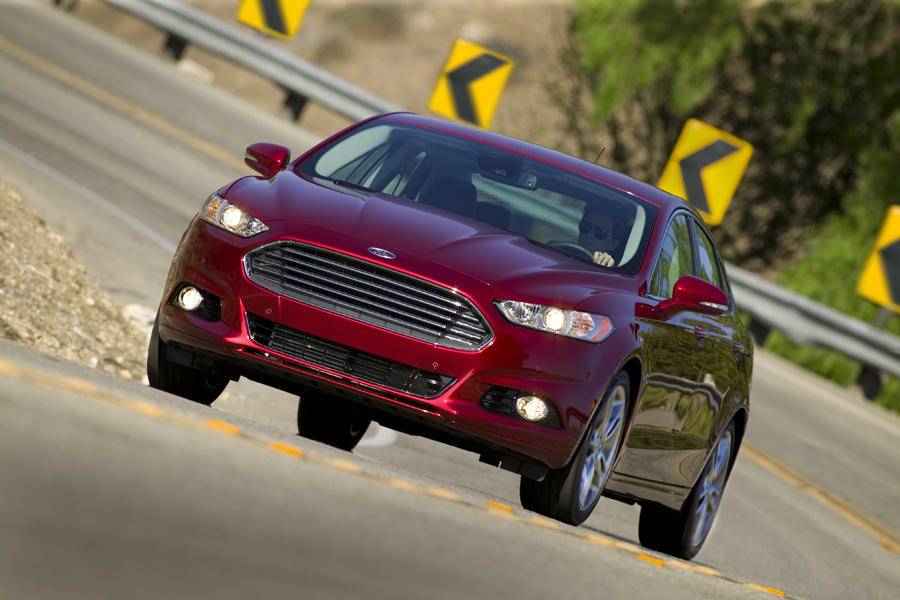 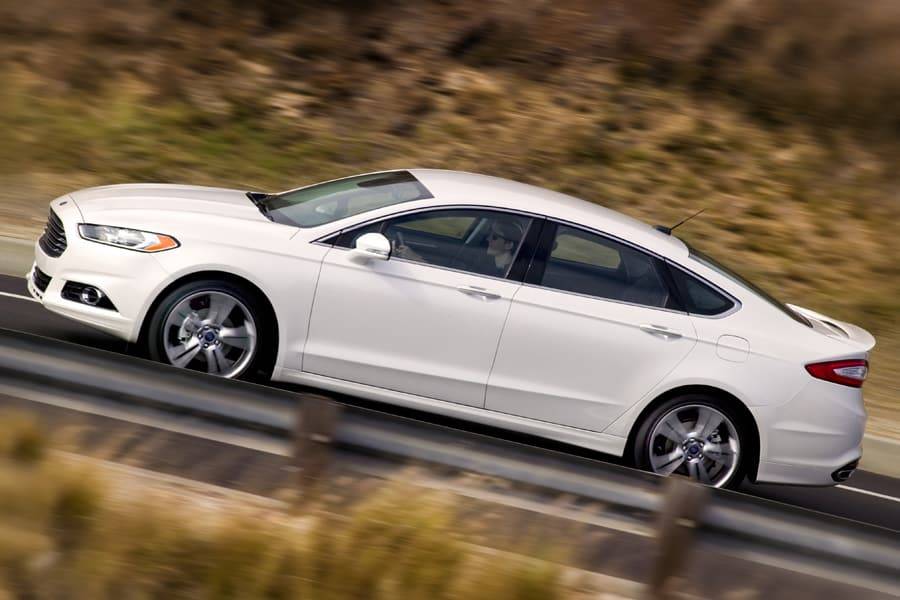 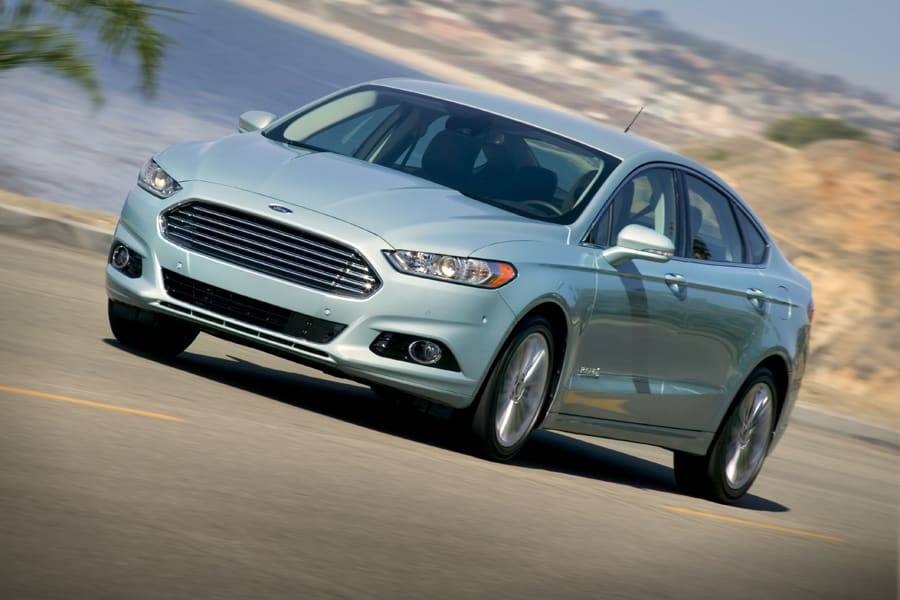 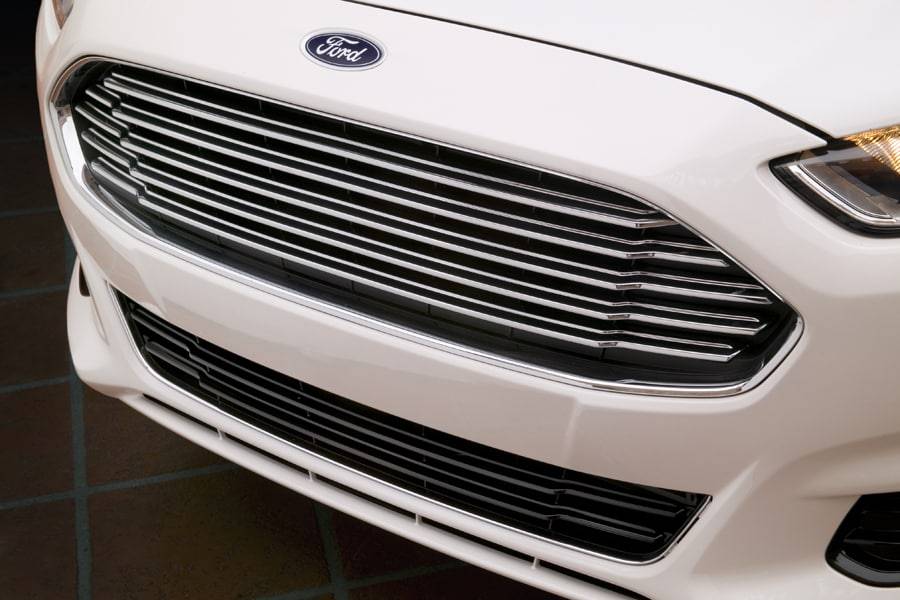 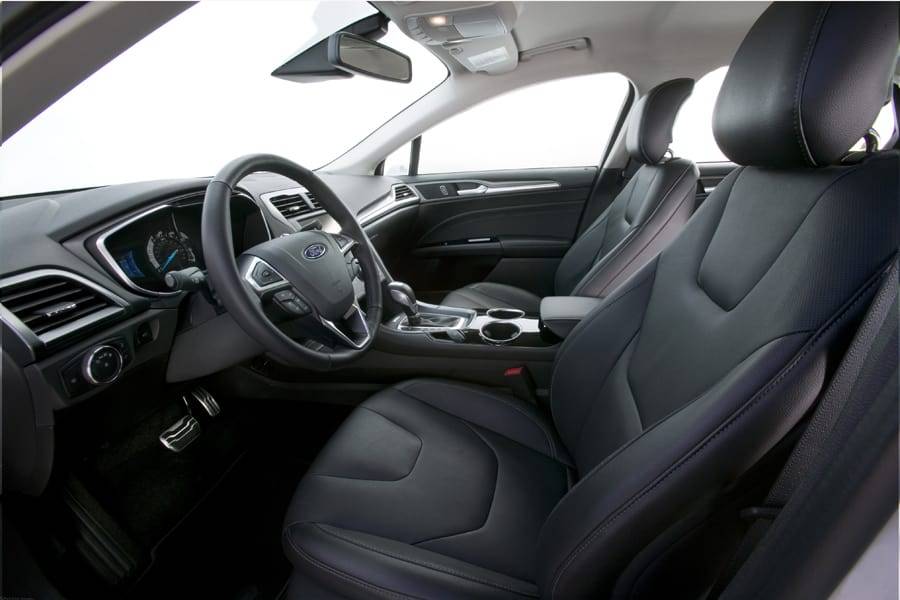 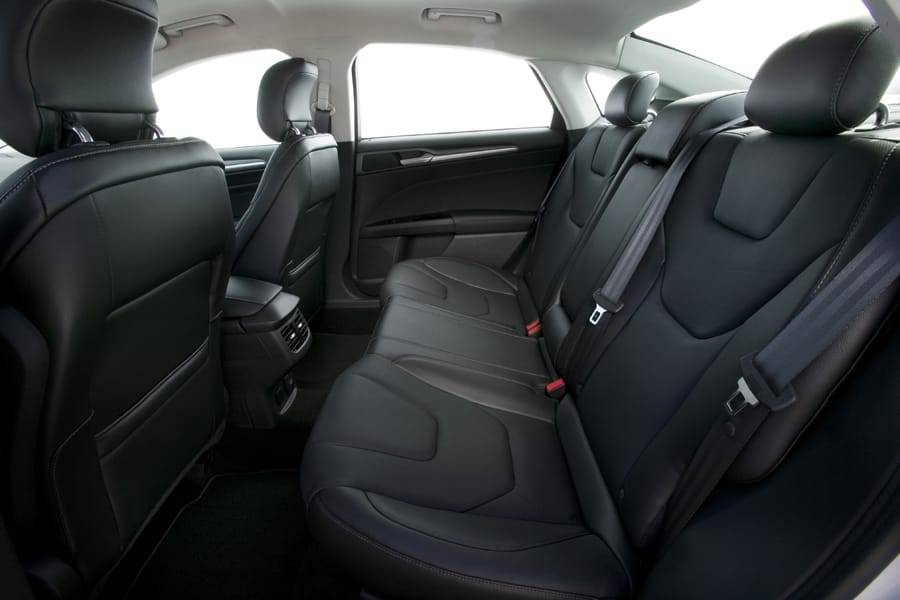 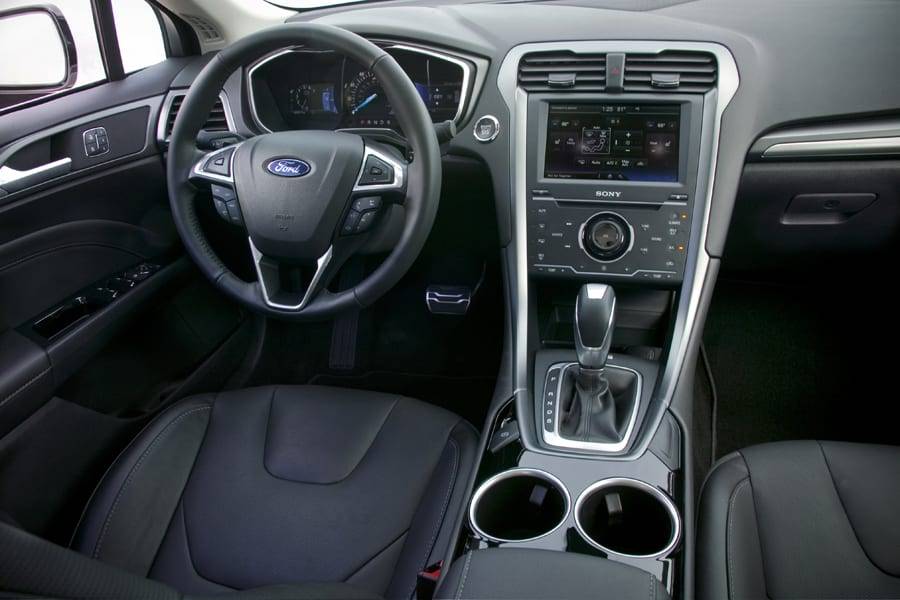 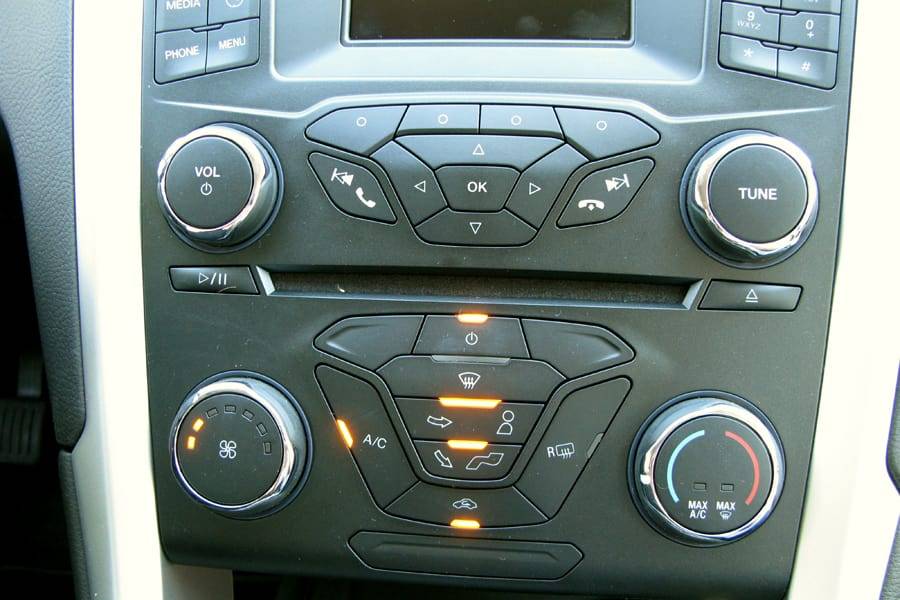 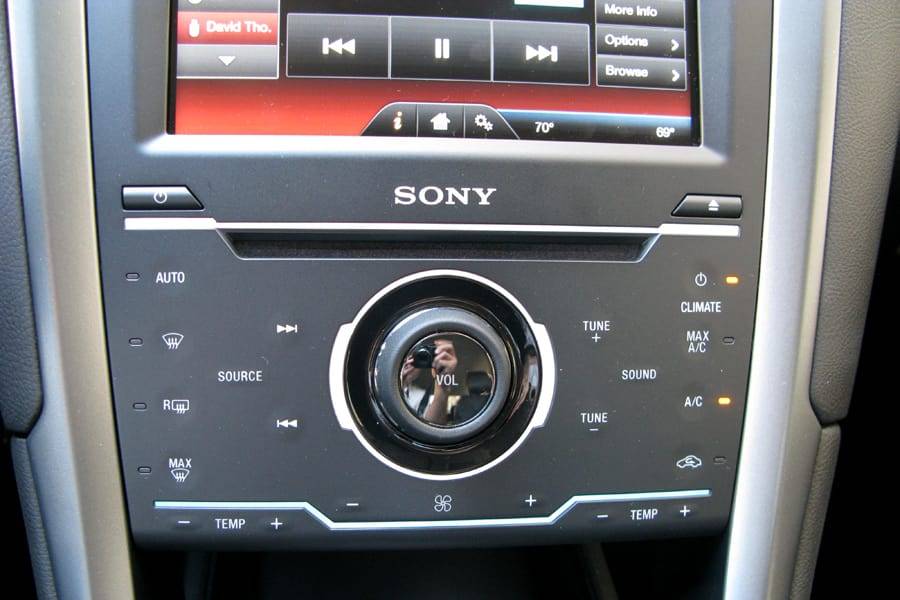 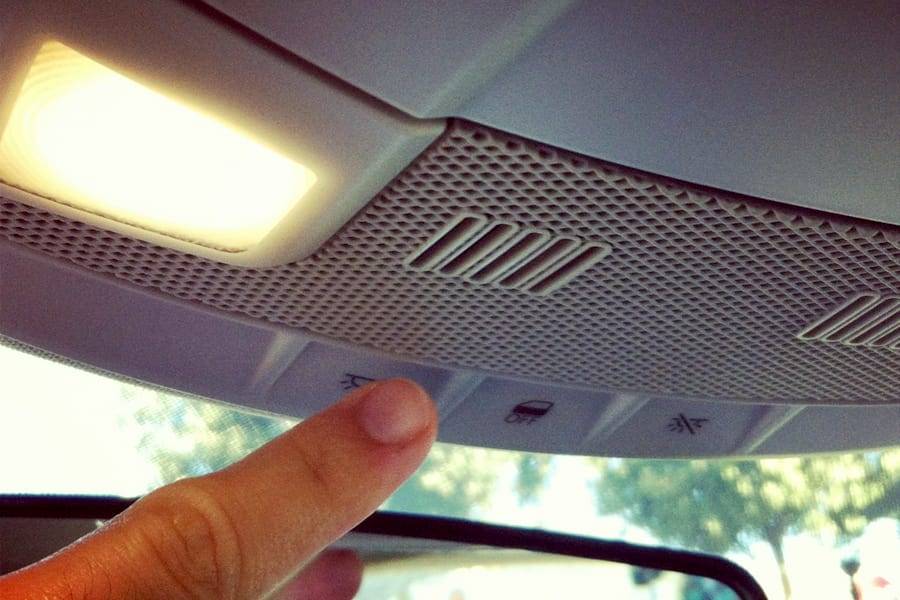 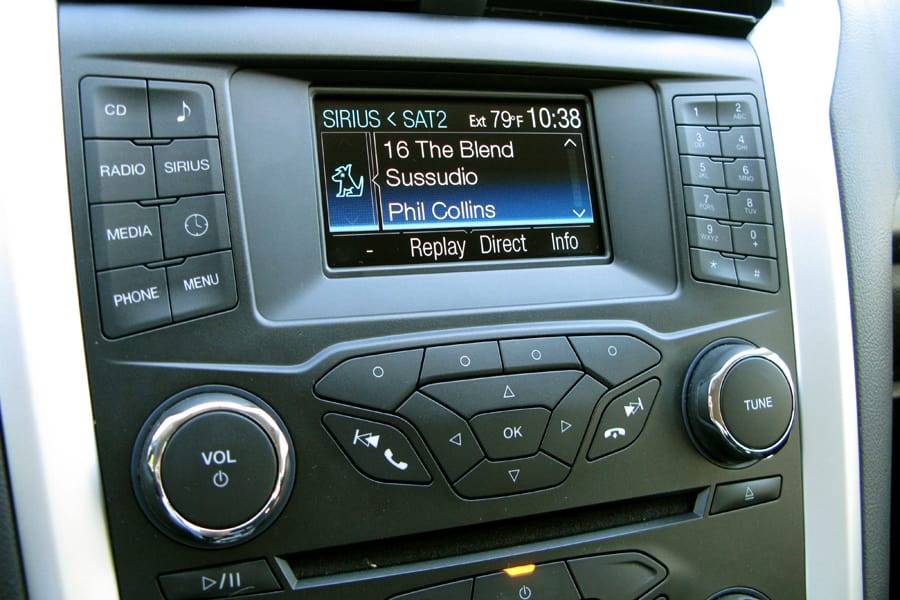 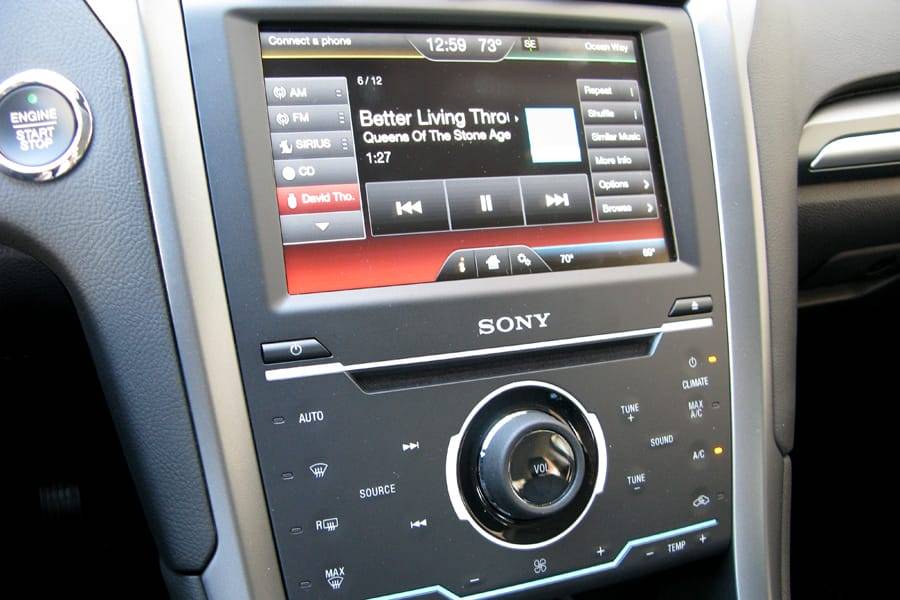 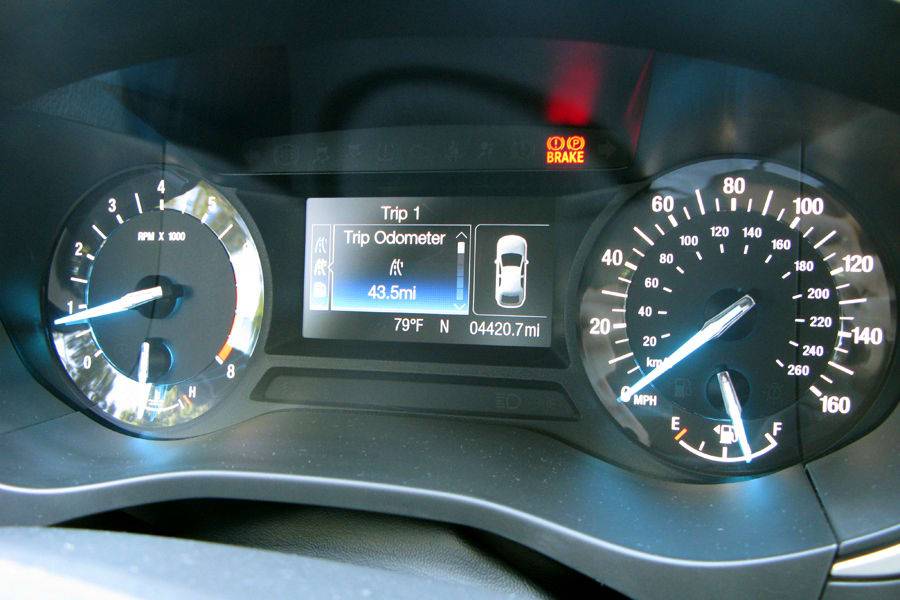 1/13
There is simply no other mainstream sedan on the road with the aggressive styling of the redesigned Fusion. | Toggle between photos using the right and left arrow keys. Manufacturer photo

Editor’s note: This review was written in September 2012 about the 2013 Ford Fusion. Little of substance has changed with this year’s model. To see what’s new for 2014, click here, or check out a side-by-side comparison of the two model years.

Trying to decide on a midsize sedan may be one of the hardest tasks for any car shopper. From the Hyundai Sonata and Toyota Camry to the redesigned Nissan Altima and Honda Accord, these cars offer quiet cabins, plenty of space and a fair amount of features even in base or lower trim levels.

The redesigned 2013 Ford Fusion breaks away from the pack in a big way. It outhandles the entire field and has a design that is James Bond dashing while the rest would be best fit for Miss Moneypenny.

If midsize sedan shoppers want fun and style, the redesigned 2013 Ford Fusion is perhaps the only option they have, but it does come with a few tradeoffs.

The 2013 is significantly different from the outgoing 2012 in terms of not just performance and technology but also size, inside and out. You can compare the two model years here.

Style
From the Aston Martin look of its front end to the geometric design of the tail, the Fusion is an exercise in aggressive styling. That was the plan. The entire car was developed to preserve the styling designers had penned. When engineers needed to make the car larger, they still had to maintain the design’s aesthetics.

The design does translate to a high belt line, narrow windows and reduced visibility, though.

Performance
The looks may draw in shoppers, but an array of four engines — three of which are new for the Fusion — may be the hardest decision made at the dealership.

It’s easy to dismiss the S and SE’s base engine, a carryover from 2012. The 2.5-liter four-cylinder produces 175 horsepower and gets an EPA-estimated 22/34 mpg city/highway and 26 mpg combined.

Next up is the 178-hp, turbocharged 1.6-liter four-cylinder that achieves the best non-hybrid mileage at 25/37/29 mpg city/highway/combined with a six-speed manual transmission and 23/36/28 mpg with a six-speed automatic.

Replacing the previous generation’s V-6 is a new turbocharged 2.0-liter four-cylinder with an impressive 240 hp and 270 pounds-feet of torque that returns 22/33/26 mpg. It comes with an automatic transmission but is the only engine that can be teamed to optional all-wheel drive.

The turbo engines run on regular gas but premium is needed to achieve the posted horsepower ratings. Mileage is the same on regular or premium.

Finally, there is a hybrid with a 2.0-liter four-cylinder and electric motor producing a combined 188 hp and returning 47 mpg across the board in city, highway and combined mileage.

I drove the three new powertrains over hundreds of miles in hilly Southern California and found the variety welcome, but each with its own quirks.

The 1.6-liter with an automatic will likely be the volume leader in terms of sales, but I found it the least interesting to drive. The power rating is below most of the competition, and it’s noticeable on the road. There is still ample passing power in highway situations, but it doesn’t feel nearly as robust as the Nissan Altima’s 182-hp four-cylinder engine. I was able to reconfirm my past experience on this point with a base Altima provided by Ford during the Fusion test drive.

With a manual transmission, the 1.6-liter is livelier, and downshifting to ascend curvy roads helps you appreciate the car’s impressive handling.

No matter which Fusion I tested, it took curves with sports car aplomb. Even with low-rolling-resistance tires on all the Fusions — equipped with standard 16-inch or optional 17-, 18- or 19-inch wheels — there was ample grip. Steering feel on all the cars is exceptional: precise during dynamic turns and on point on straight stretches.

The 2.0-liter delivered considerably more power — obviously — and teamed with all-wheel drive was even more fun to pilot around California’s curvy roads. While I’d never turn down more power, I wish the 1.6 had a bit more so the 2.0 wouldn’t be a necessary option at all.

The ride in the 1.6 and 2.0 was tightly composed, showcasing the work that went into designing a global car that needs to meet the sporty desires of European customers, too. However, the car doesn’t sacrifice too much comfort. It’s not as soft as the Altima or Camry but on par with the Kia Optima over rough road surfaces. Road and wind noise fall in that same spectrum, as well.

The Altima may be the more comfortable cruiser, but when I took it on sharp turns at speed, my co-pilot and I leaned far out of our seats. Take the same turn in the Fusion, and you stick to your seat like there’s adhesive on the fabric. This is confidence-inspiring during fun drives through the mountains, but for the daily driver, I question if it will be a deciding factor.

Hybrid
The Fusion Hybrid might have been my favorite of the bunch because it felt like it had the mix of power I was looking for with a slightly suppler ride while still featuring that impressive steering feel and handling.

The fact that it’s rated at 47 mpg is just a bonus.

Ford also did a good job with the traits that often limit a hybrid’s appeal. The brakes felt good under foot with none of the soggy or unpredictable feedback you can find in other hybrids and fully electric vehicles.

The battery pack in the trunk was also well-executed. There is a noticeable hump that reduces cargo space from 16 cubic feet to 12 cubic feet, but it is designed like a shelf so that larger cargo can fit in the deeper well and other items like groceries, dry cleaning and smaller bags can go on the shelf. The rear seats also fold to create a flat floor with that shelf.

Ford wisely left the stand-out Fusion styling as-is for the hybrid. There are no aesthetic or visible aerodynamic tweaks on the exterior to help cheat the wind. The Fusion Hybrid does get a set of shutters that close during certain types of driving to help with aerodynamics. Located behind the car’s grille and radiator, the shutters reduce drag at higher speeds. All Fusions feature a significant amount of underbody shielding to decrease drag, but the Fusion Hybrid’s underside is almost entirely shielded.

These changes aid the hybrid powertrain in returning the impressive 47 mpg mileage. There is no EV driving mode, and the hybrid features a digital gauge cluster identical to that found in Fusions equipped with the optional MyFord Touch multimedia system. The Fusion Hybrid does carry over the previous generation’s familiar graphical leaves in the gauge cluster that grow as you drive more efficiently.

Interior & Cargo
Inside, the 2013 Fusion benefits from a considerably longer wheelbase as well as about an additional inch of exterior overall length. Interior measurements for headroom, legroom, hip room and shoulder room are all competitive or near the top of the class. The legroom numbers proved true. There was plenty of space for me in both the driver and rear seats. Front headroom wasn’t an issue, but in the rear seats I felt like if I were an inch or two taller than my 5-foot-10 frame I might have some issues.

Both the fabric and leather seats I tested felt significantly firm but offered good support. After two hours of solid driving, my thirty-something back was feeling sore. My twenty-something co-driver had no back issues even after four hours of driving. But in my defense, I took my comparison test in the Altima at the two-hour mark, and its wider, softer seats felt therapeutic on my poor back.

The cabin materials are all of good quality and competitive for the class. The main issue for shoppers will be the ergonomics — and not just of the optional MyFord Touch system. Even the base console, which has physical buttons, sports dozens of them. And they’re small. They look slick and futuristic, but that doesn’t make a difference in their size. Luckily, knobs for stereo volume and tuning are large, and the small LCD screen and menus are straightforward.

The standard gauge cluster is also nice to look at with a sharp LCD screen between the analog gauges, a setup we’re seeing across the segment.

I also liked the rather large cubby ahead of the shifter. It’s a bit far forward to reach easily while driving but is large enough to stash larger gear like sunglasses, wallets or smartphones.

There’s also a small cubby between the front seats that’s able to accommodate similar-sized objects, and it’s where you can plug devices into two USB ports.

The Fusion’s trunk is 16 cubic feet and gets most of the space from being deep, not wide, but there are small cutouts for golf clubs by either side of the lid opening. It holds up well against the Altima and Camry’s 15.4 cubic feet, Accord’s 15.8 cubic feet and Malibu’s 16.3 cubic feet.

You can compare the Fusion to the Accord, Altima and Camry here.

Features
The Fusion comes relatively well-equipped with the base S model getting standard Bluetooth, Ford’s Sync system, power windows with express up and down for all windows, remote entry, body-colored mirrors and door handles, and a chrome grille at $22,495 (all prices include destination charges). But that’s with the 2.5-liter engine, and this is where pricing will become a problem for Ford in this very competitive segment.

The Altima, Camry and Accord come standard with their most fuel-efficient engines and cost $22,280, $22,850 and $23,270, respectively, with automatic transmissions.

And to confuse even regular Ford shoppers a bit, there’s no longer an SEL trim level. There is the base S, SE and Titanium. S comes only with the 2.5-liter engine. SE comes with the 2.5, 1.6 or 2.0, and the Titanium is equipped only with the 2.0.

Simple enough, but if you want more features with the 1.6, you need to add option packages like an Appearance Package at $1,250 or the Luxury Package at $2,300.

MyFordTouch is an option for the SE trim in the Technology Package at $1,000; it  also adds a backup camera and dual-zone temperature control. The Titanium MyFordTouch comes with an upgraded 12-speaker Sony stereo, which I tested and found rather robust. That makes paying the $30,995 price a bit more palatable.

The touch-sensitive capacitive buttons on models without the Sony system are few and spread out a bit to make finding the right one easier since you can’t feel them blindly. The Sony system is busier with many more capacitive buttons — none of which feature an audible click or send a pulse of feedback through the panel to confirm you’ve actually achieved the desired result of your finger pressing. And to take this buttonless world to a new extreme, controls for the map lights in the roof console of all Fusion models are also capacitive touch.

Safety
The 2013 Ford Fusion has not been crash-tested by either the Insurance Institute for Highway Safety or the National Highway Traffic Safety Administration.

The Fusion features a standard array of airbags and optional safety technology like lane departure warning and correction, backup sensors and cross-path detection.

You can see a list of safety features here.

Fusion in the Market
There is no denying it: The Fusion carries a price premium in this class to get a competitive engine under the hood. That premium can be an easier pill to swallow because the hood and everything around it is just that good looking, and the car is that much fun to drive.

The lingering question is just how many midsize sedan shoppers out there want a fun-to drive sedan when they can get more comfort and value from a variety of well-reviewed cars from other automakers.