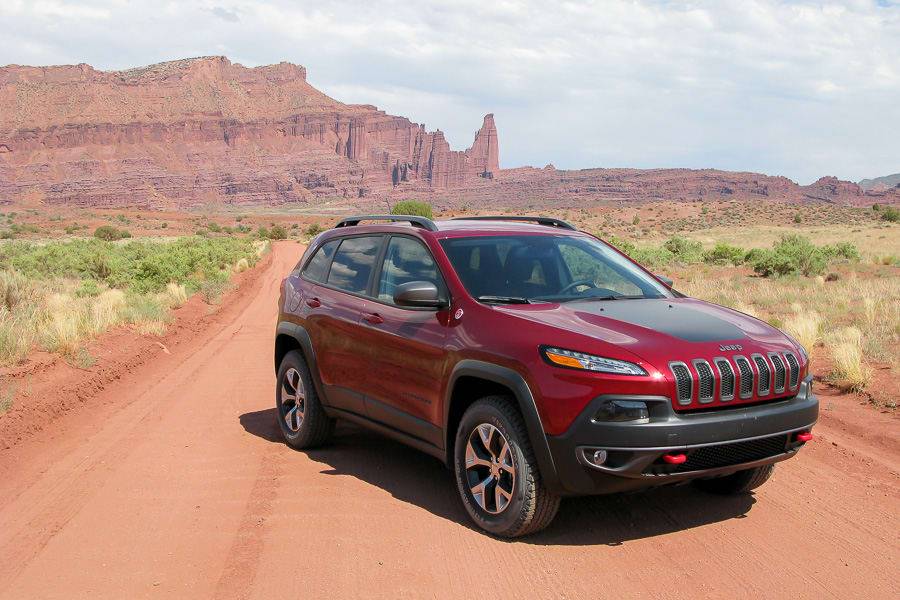 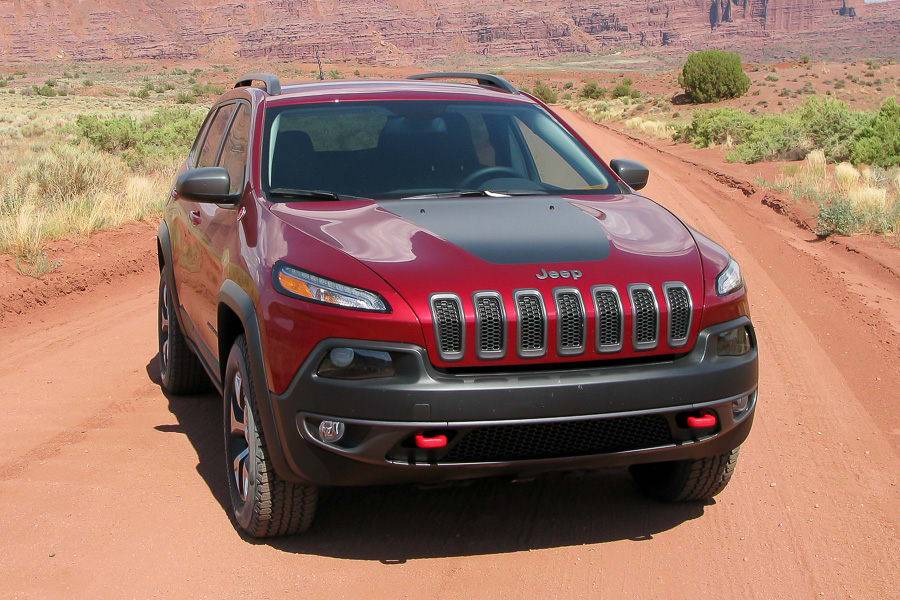 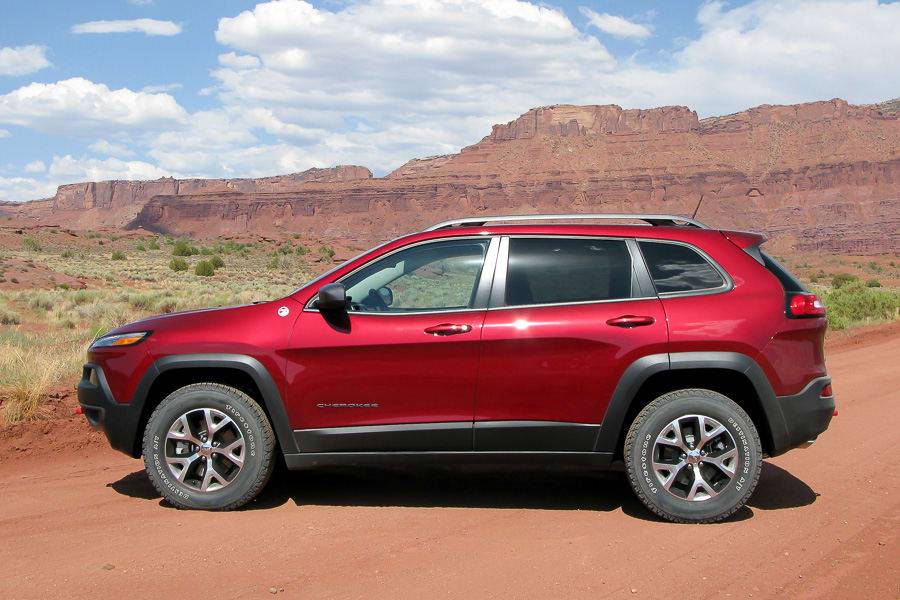 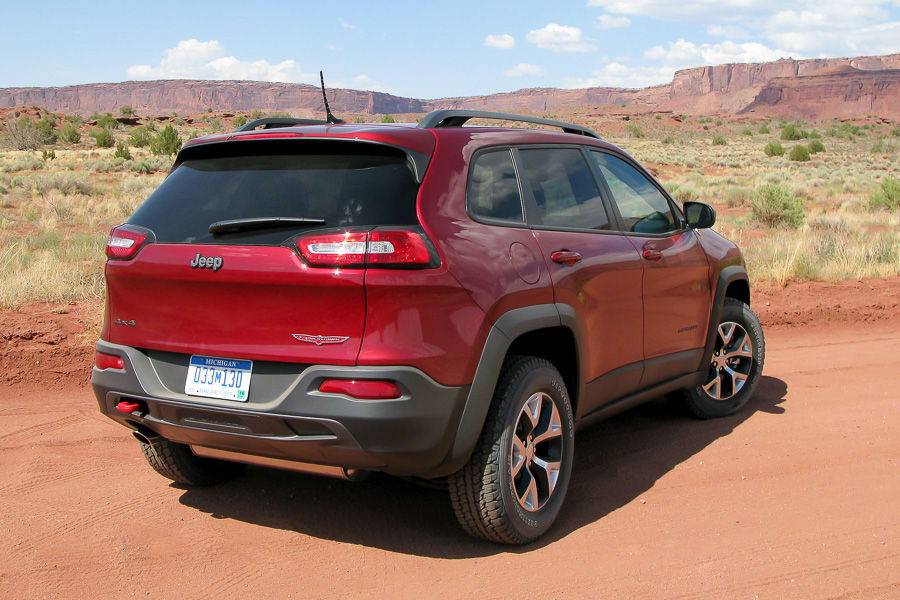 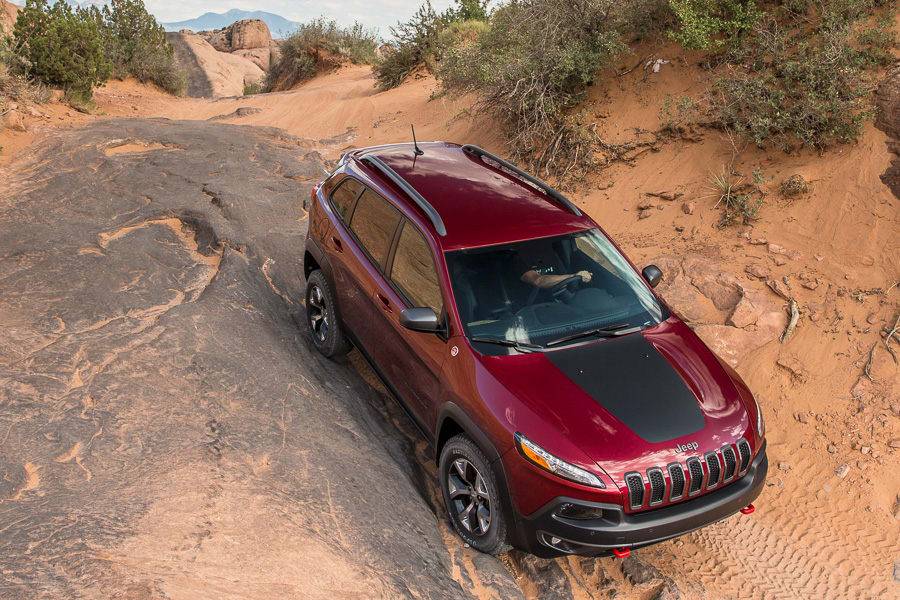 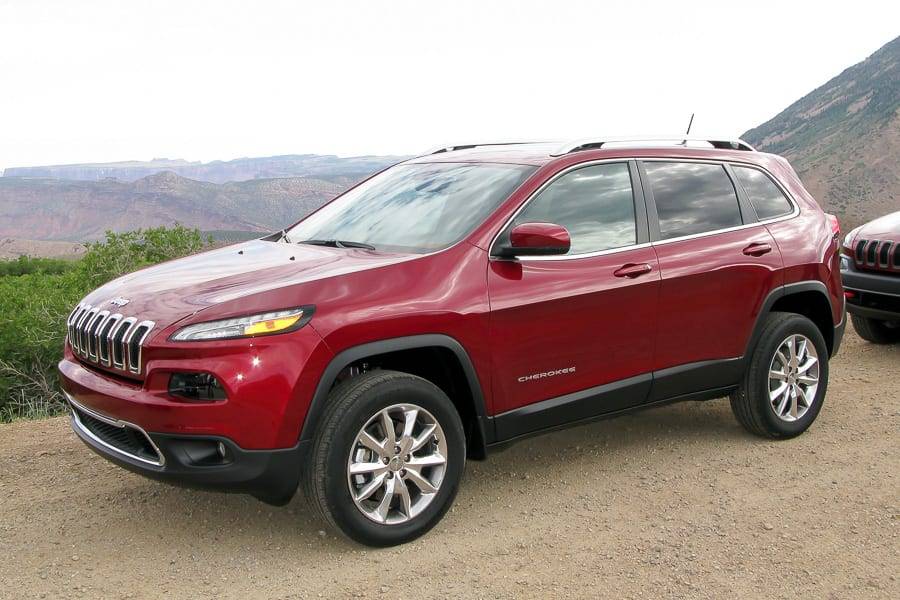 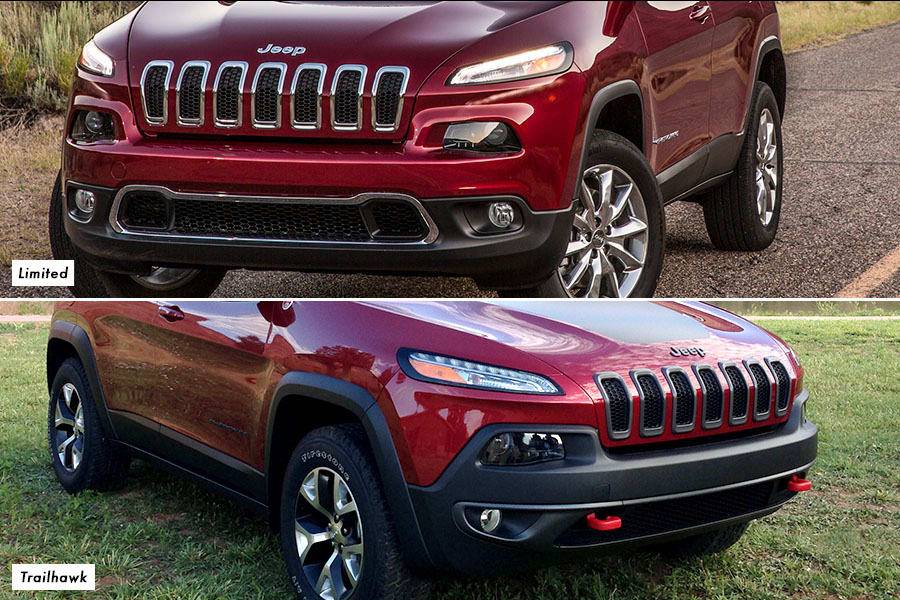 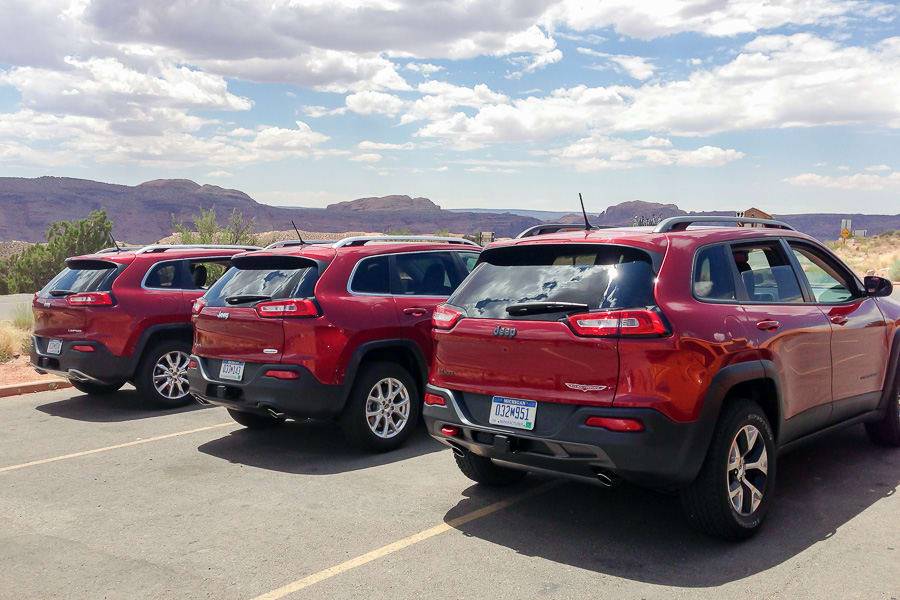 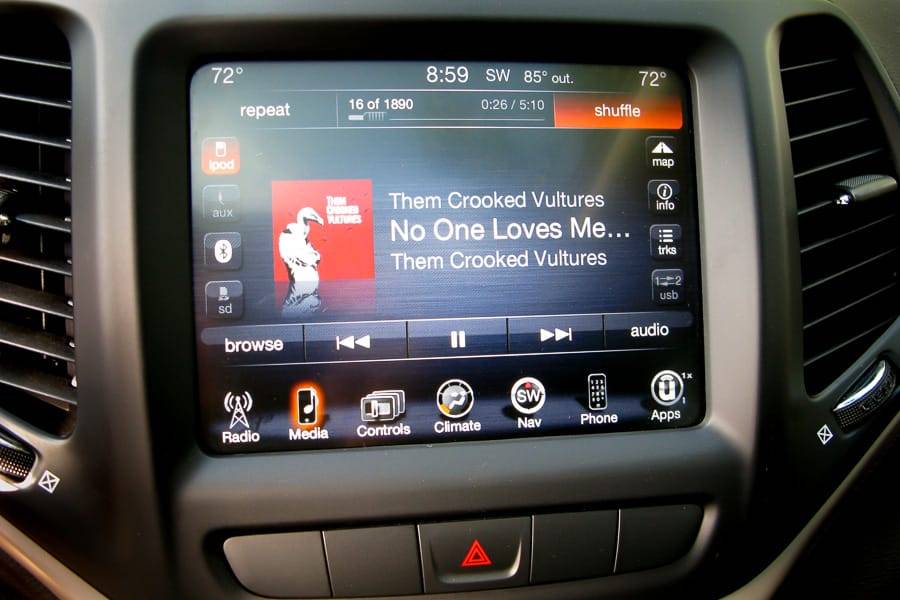 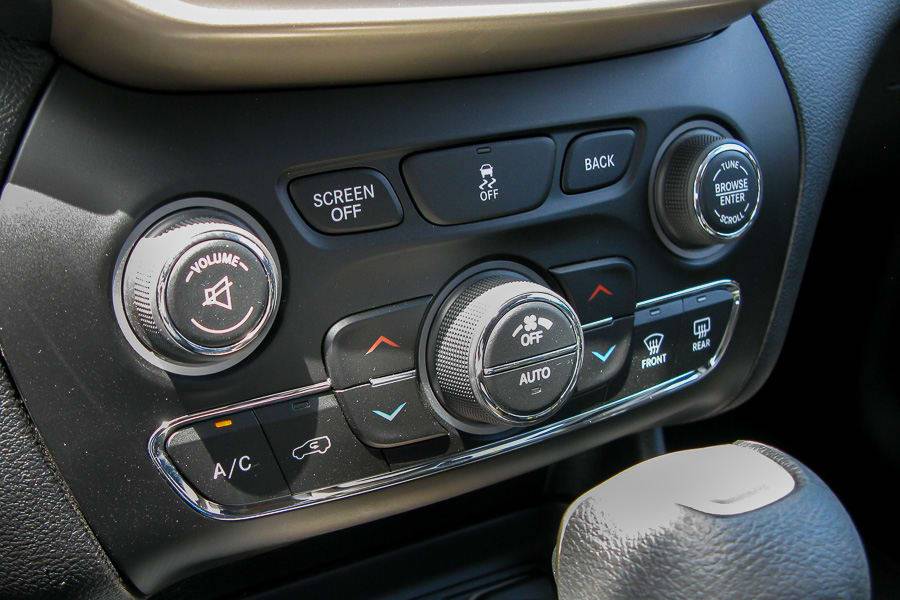 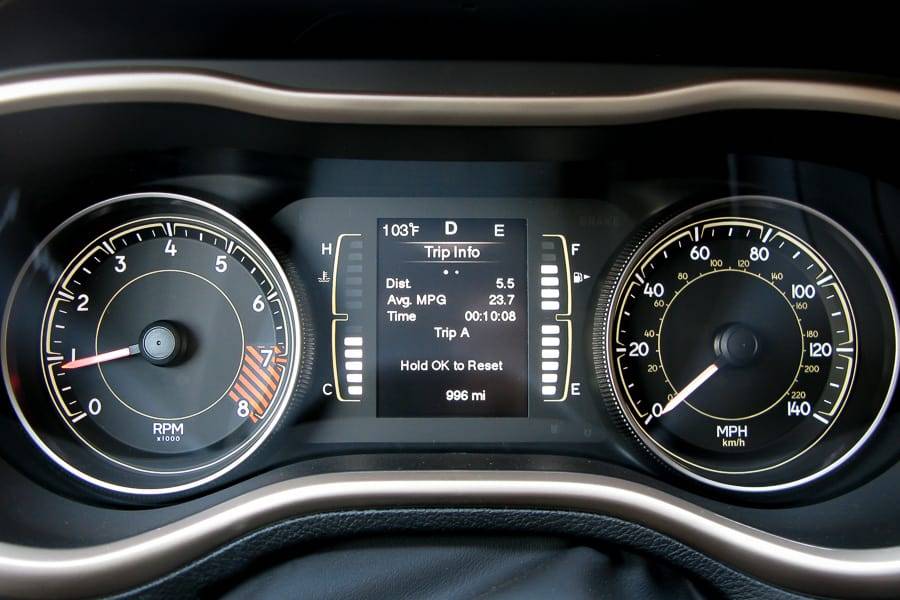 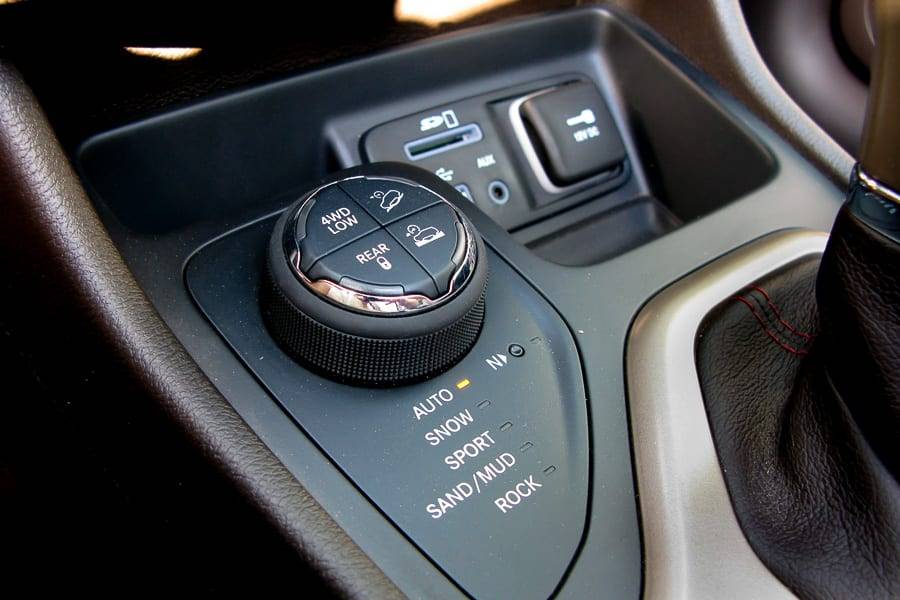 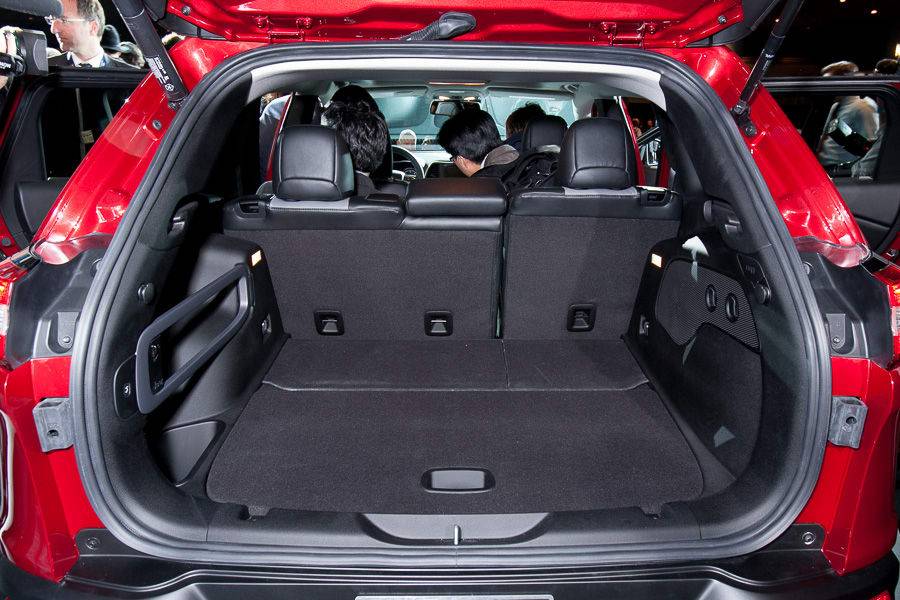 1/13
The look of the new Cherokee is certainly a showstopper. Whether it is a benefit to the SUV&#39;s chances in the market is still a question. | Cars.com photo by David Thomas

The release of an all-new Jeep model is not an everyday occurrence. The radical-looking 2014 Cherokee, which replaces the Liberty, has a simple formula: It looks crazy on the outside and upscale on the inside, makes the most of its interior space and has perfectly acceptable on-road performance and mileage.

The fact that a version of the 2014 Jeep Cherokee can handle extreme off-roading is a bonus, but everyday drivers will find the well-rounded new model a tough crossover to pass over.

While the Jeep Cherokee’s price puts it up against the entire compact crossover class, at 182 inches in length it’s sized between the likes of Honda’s CR-V and Ford’s Escape, both of which come in at roughly 178 inches in length, and Chevrolet’s Equinox, at 187.8 inches. See the Cherokee compared side-by-side against key competitors here.

Performance
During a day of testing, I drove the new Cherokee on twisty mountain roads and pockmarked streets, as well as a brief highway stint, and it performed about as well as any SUV in the class. Sandwiched between that testing were a few hours of slow-speed rock-climbing and off-road trails in Moab, Utah, renowned for its adventurous terrain.

There are two engine options: the standard 184-horsepower, 2.4-liter four-cylinder and an optional 271-hp, 3.2-liter V-6. Both are teamed to a 9-speed automatic transmission, a first for Jeep and its Chrysler parent.

I tested both in a variety of trim levels and found the 2.4-liter to be competent but a bit slow, while the V-6 was impressive and had me pushing it as fast as allowable.

Unfortunately, it will be the four-cylinder that most shoppers settle on. I was able to test the engine only in the off-road-focused Trailhawk trim level, which is the worst-case scenario for acceleration. The Trailhawk’s extra equipment adds significant weight, even compared with an all-wheel-drive non-Trailhawk trim, let alone a front-wheel-drive model.

Weight was definitely an issue during my test on surface streets. The four-cylinder Trailhawk lumbered from a dead stop and had trouble accelerating up inclines, uttering unpalatable groans as it went. At highway speeds, however, passing maneuvers were adequate, and the Jeep Cherokee didn’t seem underpowered.

The V-6 is another story entirely. The Trailhawk V-6 accelerated through the mountains with little struggle, kicking down a gear aggressively when needed, and didn’t make me think the added four-wheel drive and off-road equipment was a hindrance.

Once I shed the Trailhawk’s heavy equipment for a Limited and its simpler all-wheel drive, low-rolling-resistance tires and lower ride height, the V-6 Jeep Cherokee felt like a different car — sporty and exceptionally fast on the open road.

The 9-speed transmission felt relatively ordinary, certainly not extraordinary versus a continuously variable transmission or more common six-speed automatic. Shifts weren’t whip fast in the four-cylinder model, and with the V-6 I wasn’t able to shift among the higher gears manually. Jeep representatives say that the manual feature only allows for shifts within a threshold of maximum efficiency.

All versions of the Cherokee I tested handled well in corners, with crisp steering. There was some body lean on the tightest corners, but nothing beyond what the rest of this class exhibits in similar scenarios.

The Jeep Cherokee is nevertheless heavier than most other compacts by 200 pounds in some cases; it is nearly 100 pounds lighter than the Equinox.

So while the four-cylinder engine’s specs compare favorably with smaller crossovers, it is definitely at a disadvantage due to its weight. The four-cylinder Equinox similarly lacks thrills in the acceleration department.

There aren’t many V-6 options in the class, and the Cherokee surpasses the Chevy with a more fun-to-drive experience; it’s neck and neck with the Escape’s sprightly, turbocharged 2.0-liter four-cylinder.

Fuel economy for the all-wheel-drive versions of the V-6 Jeep Cherokee are rated at 19 mpg city, 27 mpg highway and 22 mpg combined. Again, that bests the V-6 version of the Equinox while coming in behind the turbocharged four-cylinder options of the Escape and Forester.

Off-Road Performance
This being a new Jeep, the company wanted to make sure journalists put the Trail Rated Trailhawk version through a trail worthy of the badge. That we did.

I took both the four-cylinder and V-6 Trailhawks through more than an hour of trails made of sand, rock and obscenely large rocks that were unlike any off-roading I had done before. Incline grades of well more than 30 degrees were common, and the Trailhawk handled them just fine as long as I exhibited deft control of the accelerator.

There aren’t rock rails on the Trailhawk, which would add even more weight, and a few “crunches” were heard. They can be added as a dealer accessory. Some journalists’ vehicles showed slight signs of damage along the front lower bumper.

The fact that an automaker’s vehicles can take on such challenges to earn a “trail rating” isn’t that significant. It’s when a relatively untrained driver can step into a Cherokee Trailhawk, drive it for just an hour or so on the road and then simply take it up the side of a giant boulder without any alteration to the vehicle, even tire pressure, that I sit in awe.

It’s likely that serious off-roaders will still frown upon the Jeep Cherokee. They see nothing wrong with the Wrangler and its even more capable nature. The Trailhawk Cherokee will likely be sold to outdoorsy types looking for a little extra capability. And let’s be honest; some people are going to buy it just for the looks.

Interior
There’s no denying the Cherokee is a polarizing car to look at from the outside. It has stirred debate on our site for months. But inside there’s nothing that should cause controversy.

If anything, the Jeep Cherokee’s interior is perhaps Chrysler’s best-executed one to date. The materials in even the second-tier Latitude trim level were top-notch for the class. The look and padding of the dash are beyond what you find in a Honda CR-V or Toyota RAV4, while the overall design of the interior is stylish instead of rugged.

Touches of metallic flash exude luxury, and in fact nothing inside really speaks to this being a Jeep in the traditional sense. There was no attempt to make the inside look like it belongs in a military vehicle.

Beyond the design, the seats are comfortable, the backseat roomy for the class at 40.3 inches of rear legroom, and all the controls are laid out in the straightforward fashion we’ve come to appreciate in other new Chrysler products, like the Dodge Dart and the latest Jeep Grand Cherokee.

Cargo
Where the Cherokee comes up short against the competition is in cargo space. Even with the sliding second row moved to its forward-most position, cargo volume is rated at 29.7 cubic feet. That’s less than the Equinox, at 31.5 cubic feet, as well as the Subaru Forester at 33.5, Escape at 34.3, CR-V at 37.2 and RAV4 at 38.4 cubic feet.

With the rear 60/40-split seats folded, the Cherokee’s cargo volume extends to 54.9 cubic feet, again slightly behind the Equinox, at 63.7 cubic feet, but farther behind the rest of the field.

I still think most shoppers will find the cargo area spacious enough for most needs, and there is enough space for a full-size spare tire under the floor on Trailhawk models. The 4×4 versions of the other trims get a compact spare, while the rest get a large storage compartment underneath along with a tire inflator kit.

There’s also a standard cargo management system that features a rail installed on the side of the cargo area that serves as an attachment point for hooks and other items shoppers can buy through the dealer, like removable grocery bags, a cargo bin, a cooler, a first aid kit and an off-road accessory kit for Trailhawk models.

I’m not sure many people will take advantage of this system, but I have de facto “storage” bags in my own wagons at home that prove invaluable. The Cherokee’s look much nicer.

Features & Pricing
The 2014 Jeep Cherokee comes relatively well-equipped at a starting price of $23,990, including destination, for the 4×2 and $25,990 for the 4×4. That gets you the base Sport trim with cloth seats and 17-inch steel wheels, as well as a six-speaker stereo with a 5-inch touch-screen, Bluetooth and USB.

Most buyers will opt for the Latitude model, which is next up the chain at $25,490 and adds more content. The Limited has even more convenience features, while the Trailhawk is the “performance” model. You can see a detailed explanation of features and trim prices here.

Safety
As an all-new model, the Cherokee has not yet been crash-tested by either the Insurance Institute for Highway Safety or the National Highway Traffic Safety Administration.

The Cherokee comes with 10 standard airbags including driver and front passenger knee bolster airbags. The rear seats also have side, seat-mounted airbags as well as curtain airbags.

Cherokee in the Market
The ability of the Jeep Cherokee to scale a small mountain/very large boulder won’t be tested every day, but it does cement the slick crossover as a Jeep in capability as well as in name.

Ignore that ability, and you’re still left with one of the most competitive crossovers on the market in terms of price and features. We’ll see how many people fall for the looks, because that’s one of the few X factors on one well-executed car.