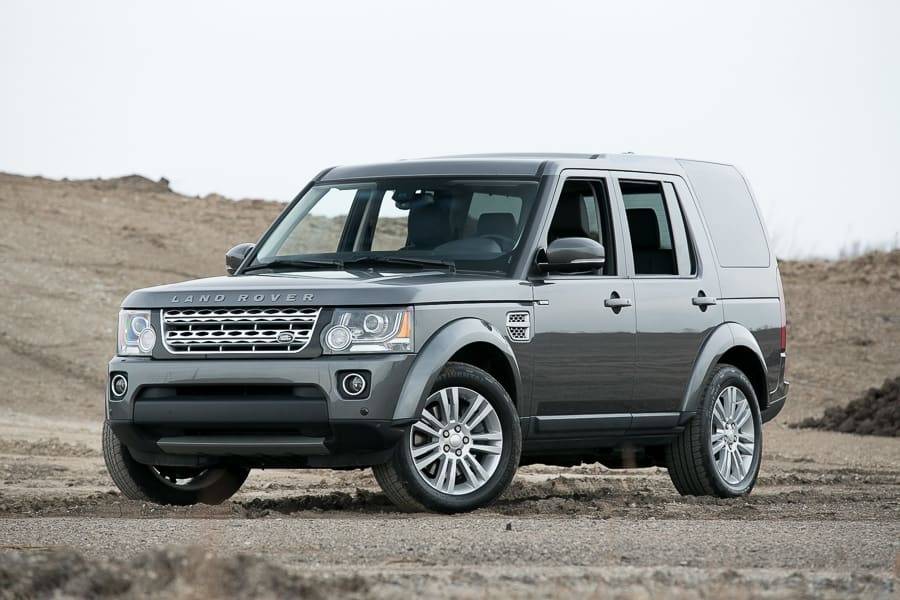 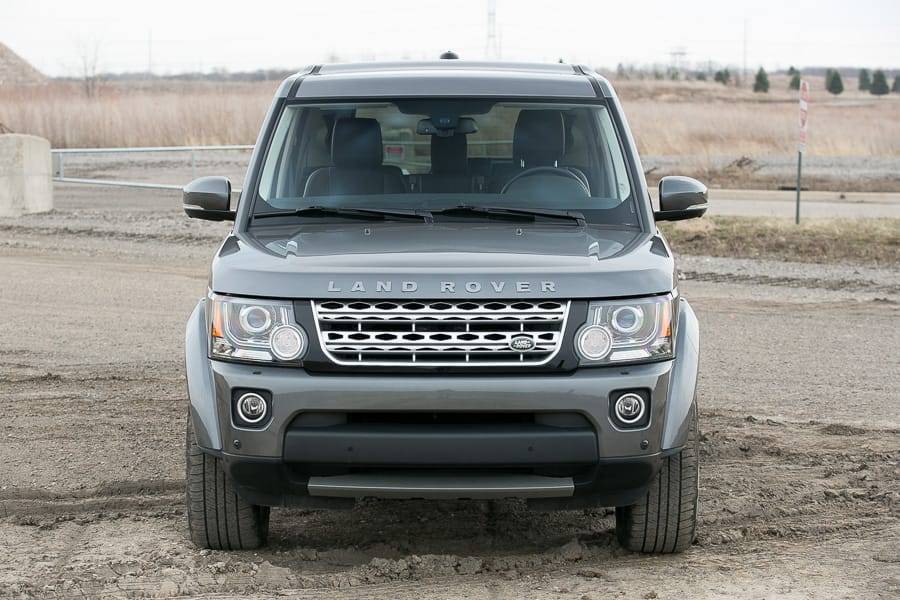 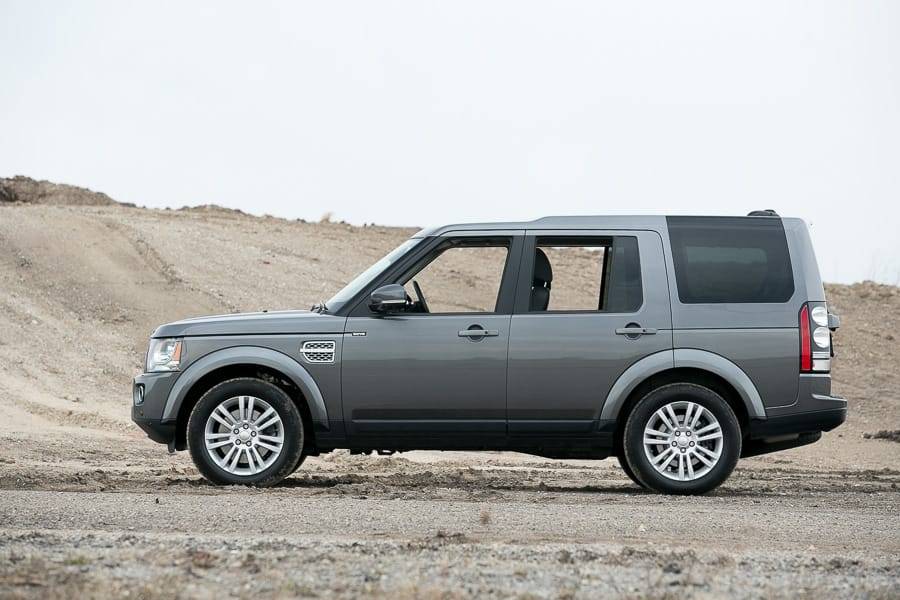 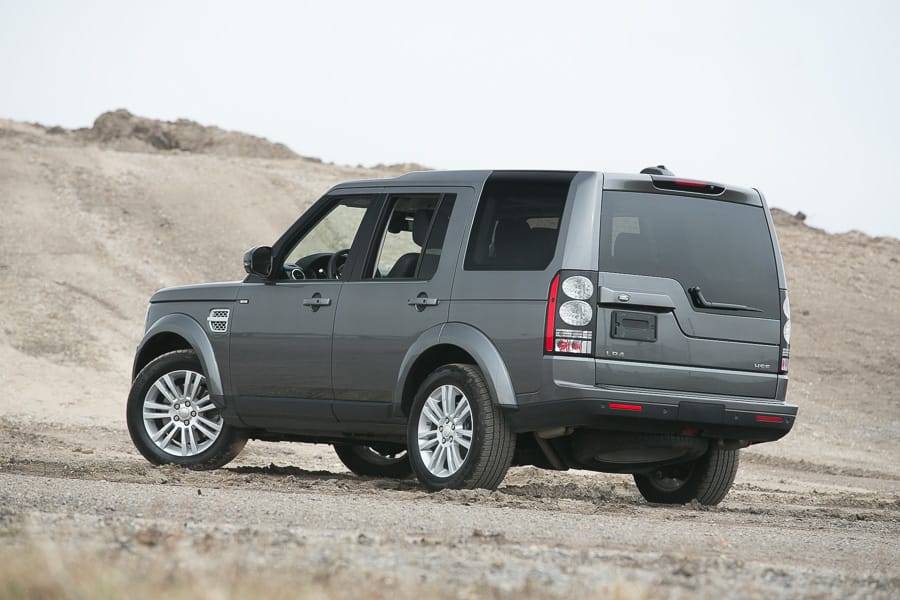 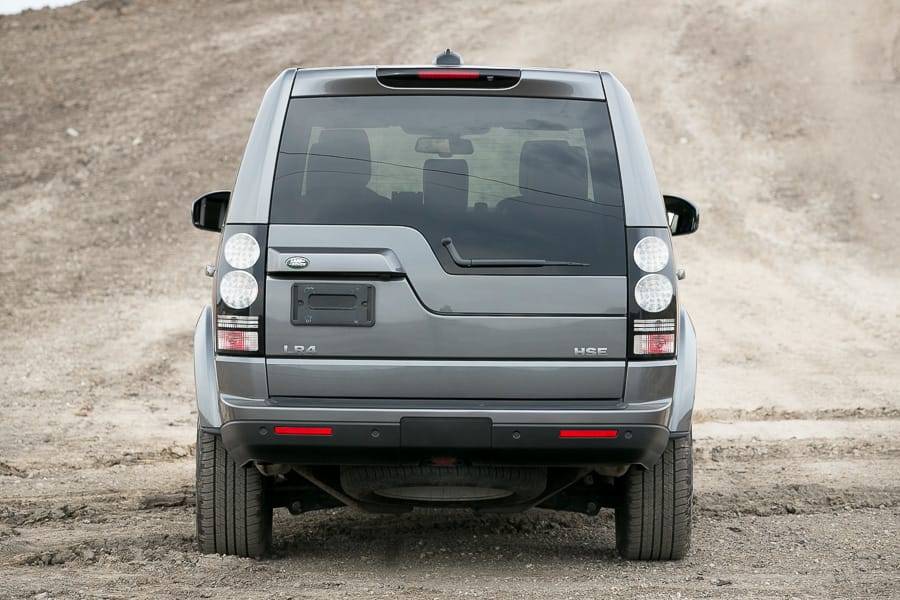 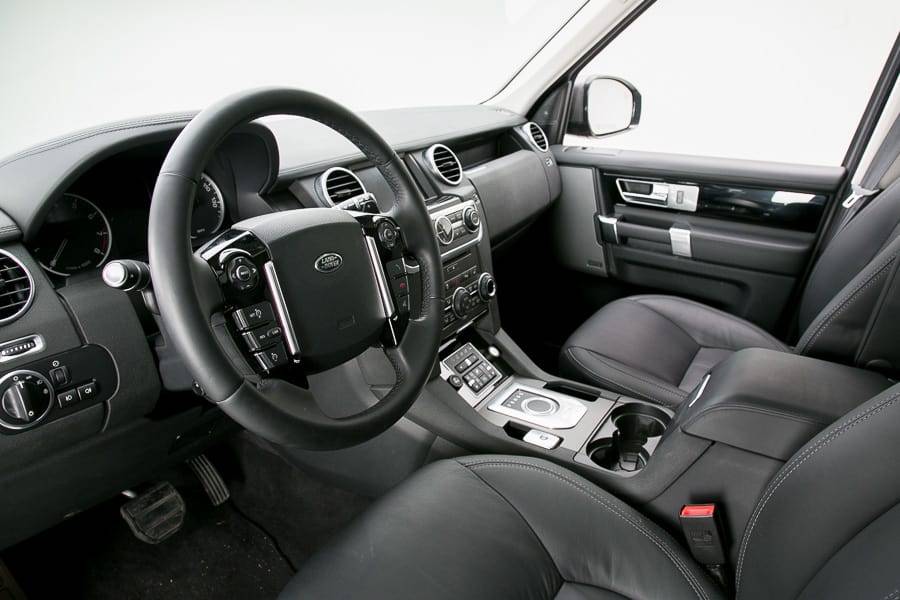 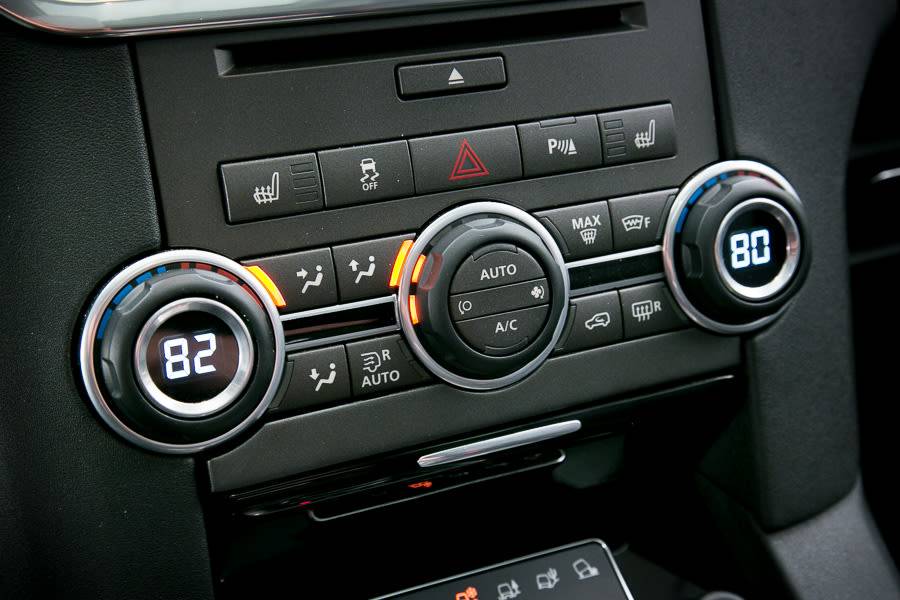 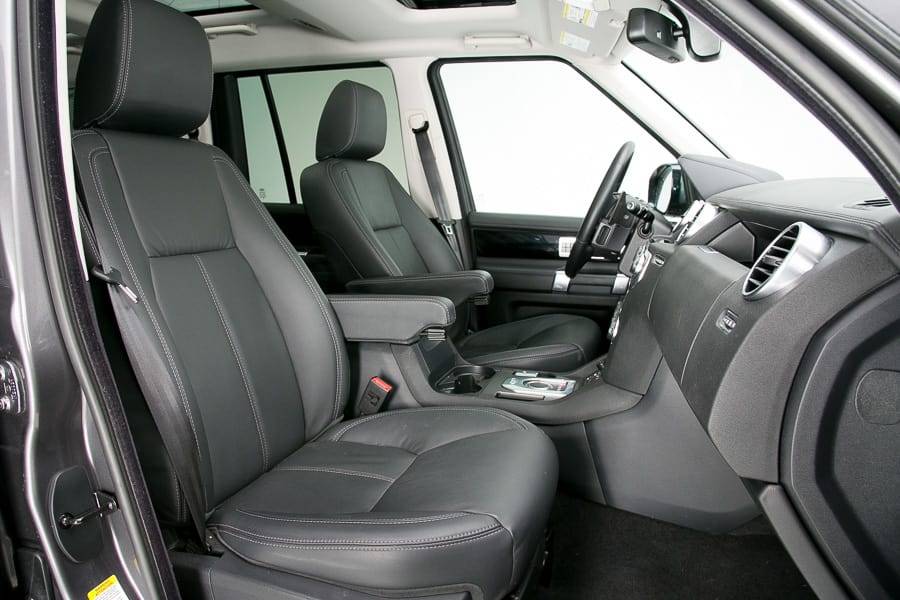 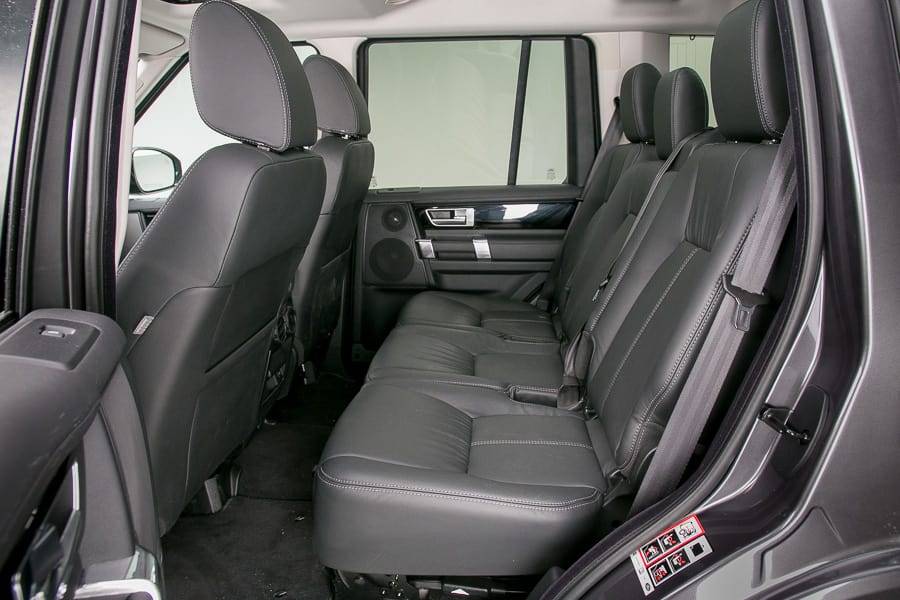 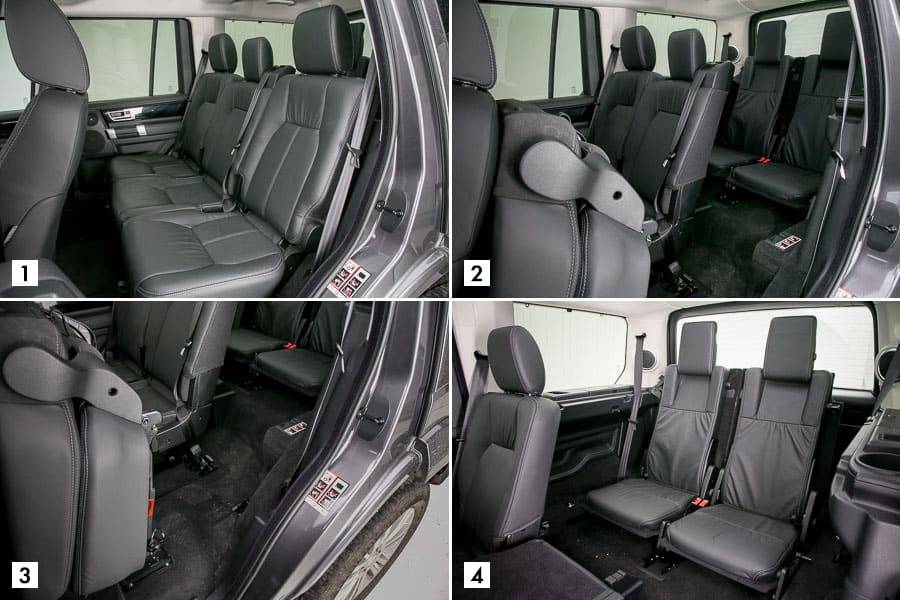 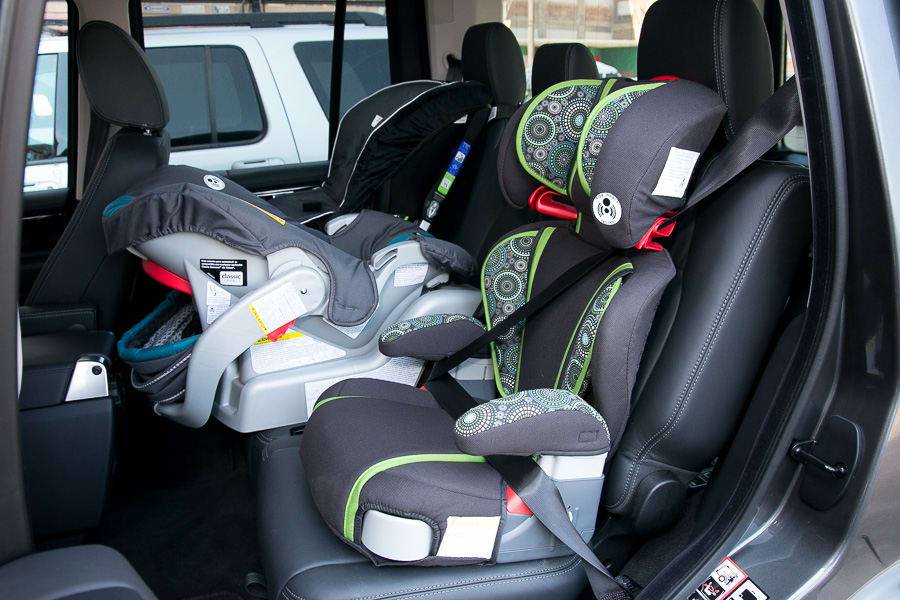 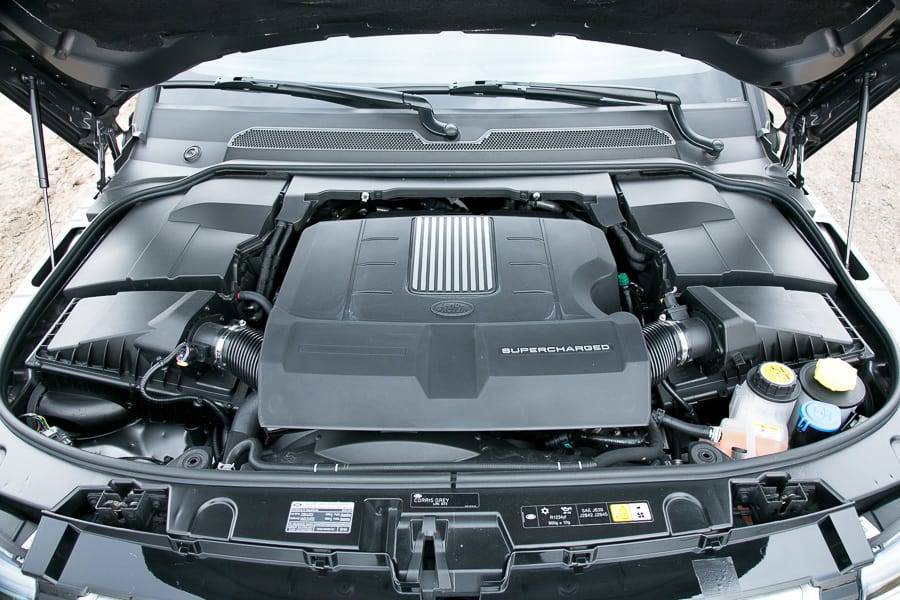 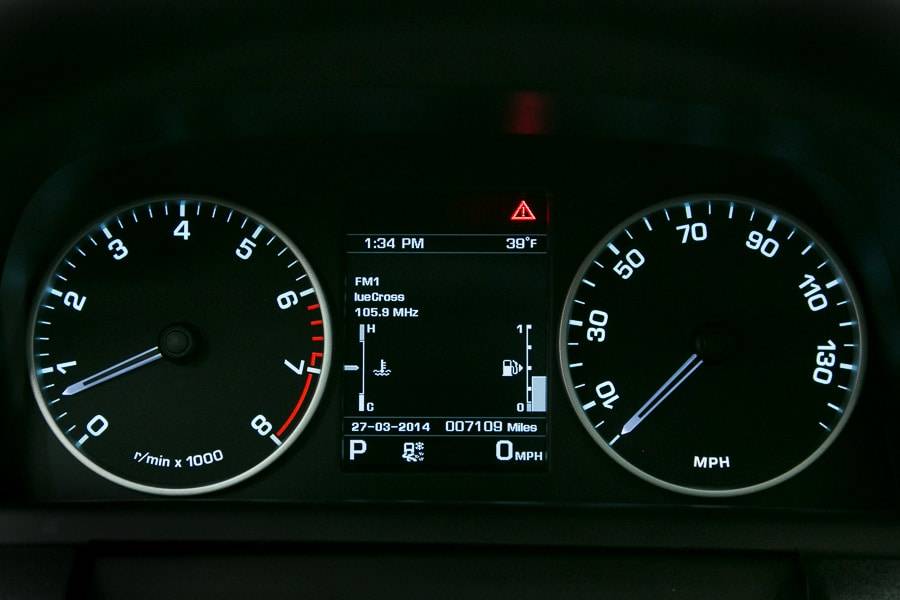 1/14
The LR4 may be the most traditional of Land Rover&#39;s current lineup. It is modeled after the classic Discovery SUV and still carries that name in other countries. | Toggle between photos using the right and left arrow keys. Cars.com photo by Evan Sears

While updates over the years have kept the 2014 Land Rover LR4 handsome and relatively affordable, its third-row accommodations remain unfortunate.

Exterior & Styling
There is something about a box on wheels that resonates with luxury and non-luxury buyers alike. The classic Land Rover Discovery silhouette continues to live on in modern vehicles like the LR4 as well as more stylized Range Rovers. The nice thing about a classic design is that a vehicle as long in the tooth as the LR4 still looks contemporary and impressive.

It is a tall design, however. While the other vehicles in Land Rover’s lineup get streamlined looks and all-aluminum bodies, the LR4 is a tall wagon. Luckily, all that height is accentuated with a copious number of windows that not only let light into the cabin but also aid visibility.

How It Drives
The Land Rover LR4 is a capable off-road machine, and comes standard with a single-speed transfer case (a two-speed transfer case is optional). But most of its time will likely be spent on paved roads and probably even in a lot of mall and school parking lots. Luckily, its on-road composure is quite good, and it has a beast of an engine.

While the 340-horsepower, supercharged 3.0-liter V-6 is a lot of fun in the Range Rover Sport, I found it to be rather tame in the heavier LR4. Still, it has plenty of power on tap when needed with decent lb-ft of torque, and the eight-speed automatic transmission does the job; it just won’t feel like a sporty supercharged SUV … like, for example, the more expensive Range Rover Sport.

In terms of ride, you don’t get a lot of the undulation you might expect through the rock-crawling-capable suspension. I found the ride to be relatively comfortable, and despite its extreme height the Land Rover LR4 handled tight turns quite well — something for which the Lexus GX 460 is not known. There is, however, quite a bit of road and wind noise due to the three-row SUV’s boxy shape.

An adjustable-height air suspension is designed for optimum aerodynamics at slow and fast speeds, but you’ll have to select the lowest level to put it at a height that makes getting in and out acceptable, even for average adults.

Interior
A recent upgrade to the LR4’s interior helps keep it competitive, but it’s still a rugged off-road feel compared with competitors, like the Mercedes-Benz GL-Class, that aim for elegance. Hop into a Lexus GX or Acura MDX and there isn’t a perceptible difference in terms of luxury accouterments, but the luxury styles of those two seem generic versus the Land Rover LR4’s off-roader ruggedness.

Thick leather covers the front seats, which are wide across the bottom and have a nice level of back support. There are also adjustable inboard armrests for both the driver and front passenger, so you won’t have to rely on the well-cushioned center console cover.

The second-row seats are more upright in terms of positioning, making both full-size children and adults a bit uncomfortable. There also wasn’t as much room in the second row as I expected for child-safety seats, which made it difficult for my children to get from one side to the other.

Folding the two back rows of seats flat and putting them back in place is also rather annoying. The second row only tumbles forward, meaning even if someone is just trying to get into the third row, the second row needs to be stowed as if you were expanding the cargo area. Many competitors have a separate, dedicated setting for the second row just for this type of access.

Folding the third row requires a number of steps using latches and straps. They’re inconvenient compared with competitors, but it wouldn’t be as much of an annoyance if getting to them didn’t require reaching over the large tailgate, which juts out and is difficult to get past. There is no power folding option, either, even though one is found in many of today’s competitors.

Ergonomics & Electronics
The Land Rover LR4 features a multimedia system you’ll find in many current Land Rovers and Jaguars. When I first tested it a few years ago I found it clunky and somewhat unattractive to look at. After some time, though, you get used to it, and most of the functions are laid out in a fluid nature. I also like having the large, physical shortcut buttons laid out below the 8-inch touch-screen. (Newer Land Rover models have resorted to touch-sensitive panels instead of mechanical buttons.)

The dual-zone climate controls are also well-done, with big knobs that are easy to grasp, wrapped in grippy rubber. This is where having a rugged aesthetic pays off, I guess.

The LR4 also features a clamshell tailgate/liftgate combination, which is cool if you like to actually tailgate, but not so much if you want to reach cargo that’s rolled around. It’s also a pain if you need to load heavy items into the LR4; it’s a long stretch even if you’re above average height.

For families who tow, the LR4 can handle 7,716 pounds. That outdoes the GX, at 6,500 pounds, and the MDX, which can only handle 3,500 pounds. Serious haulers would likely consider the QX and its 8,500-pound rating or a more traditional SUV like the 2015 Chevrolet Tahoe, which can be optioned to tow 8,300 pounds.

Safety
The LR4 has not been crash-tested by either the federal government or the Insurance Institute for Highway Safety.

There is an optional surround camera system that shows a 360-degree view around the SUV, as if viewed from above as well as blind-spot monitoring. In general, I find these systems to be useful in everyday situations and even more appreciated in larger vehicles like the Land Rover LR4.

Value in Its Class
Believe it or not, the price of this Land Rover is one thing you might like. Starting around $50,000, the Land Rover LR4 comes decently equipped with standard four-wheel drive, leather seats, 19-inch alloy wheels and an 11-speaker sound system.

It can be equipped with an array of packages, including HSE, which adds a navigation system, parking aids and power-folding mirrors for $4,900. The Land Rover LR4 HSE Lux Package costs $10,200 and adds those items plus a 16-speaker sound system, an electronically adjustable steering column, a heated steering wheel and even a cargo compartment that doubles as a “Cool Box” that can keep a small number of drinks cold so long as the engine is running.

The Mercedes GL and Infiniti QX80 start at about $12,000 more, but a Lexus GX460 is roughly the same price and comparable not just on the spec sheet, but also in terms of performance and the level of luxury inside.

Shoppers will just have to decide if a somewhat flawed Land Rover has enough charm to warrant a purchase.