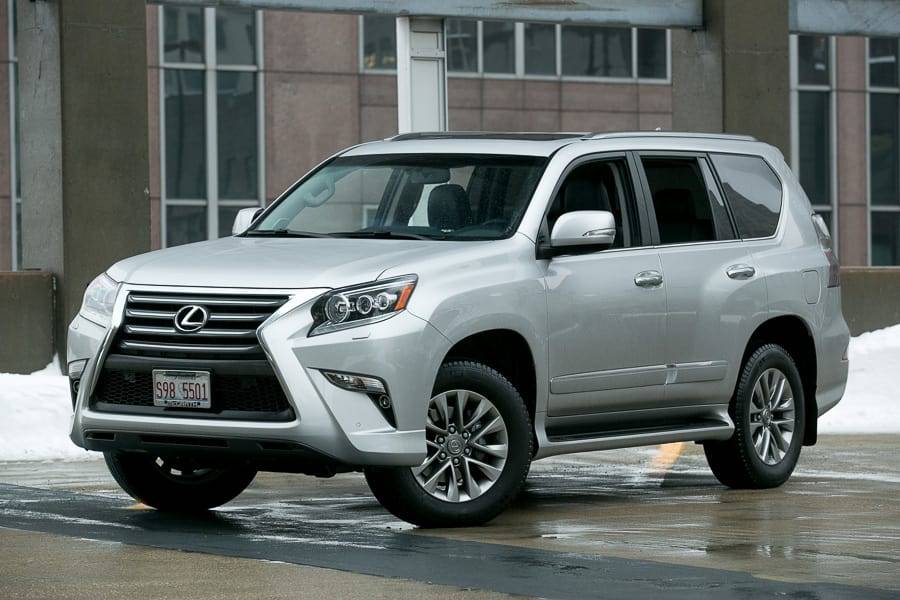 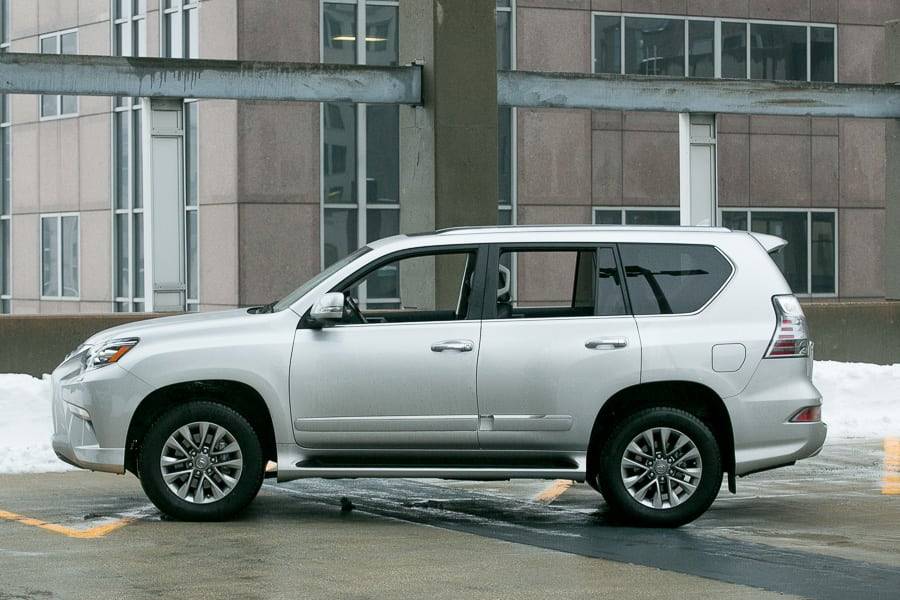 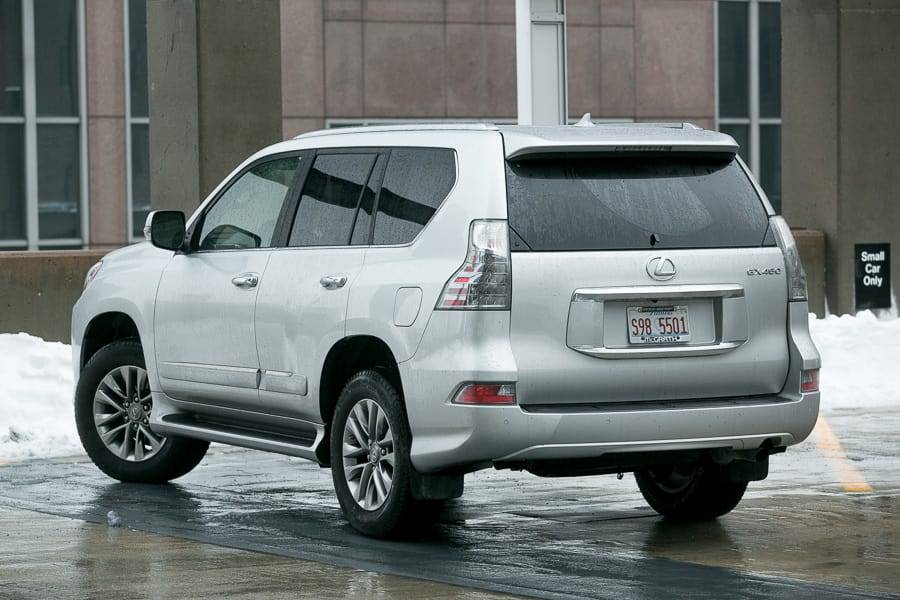 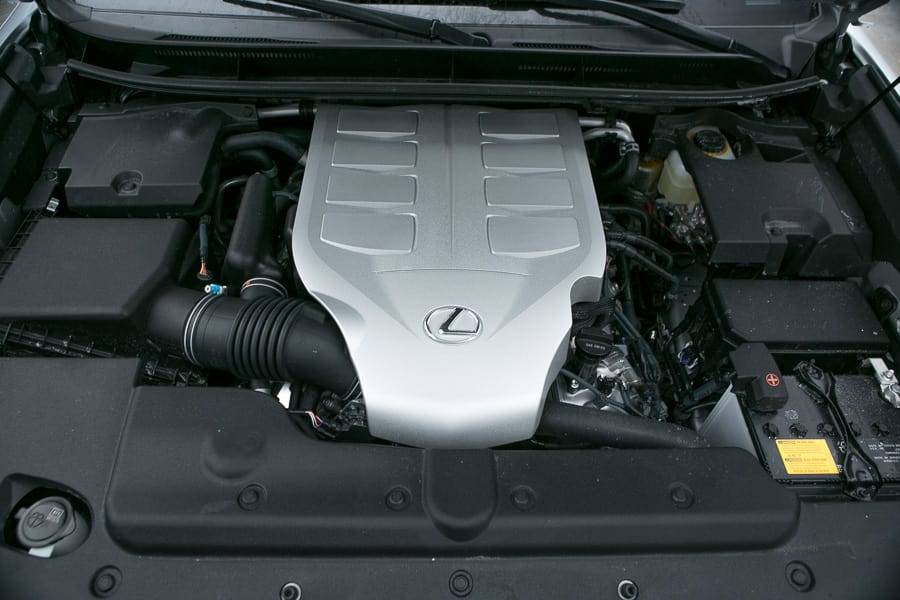 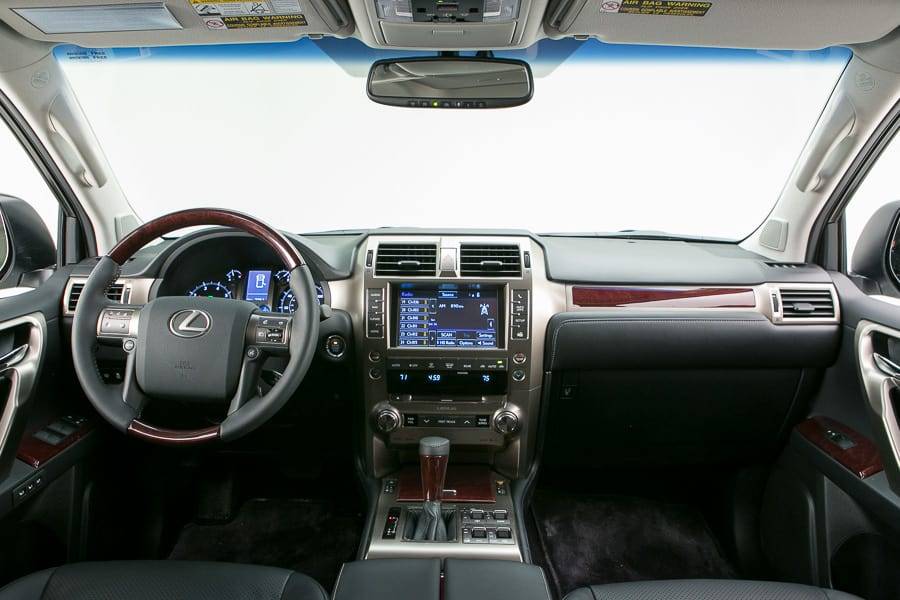 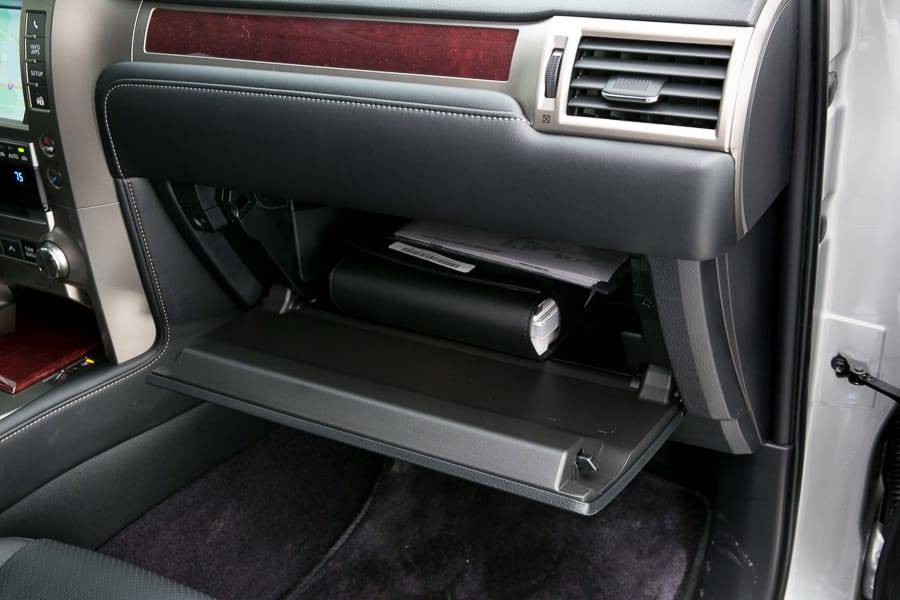 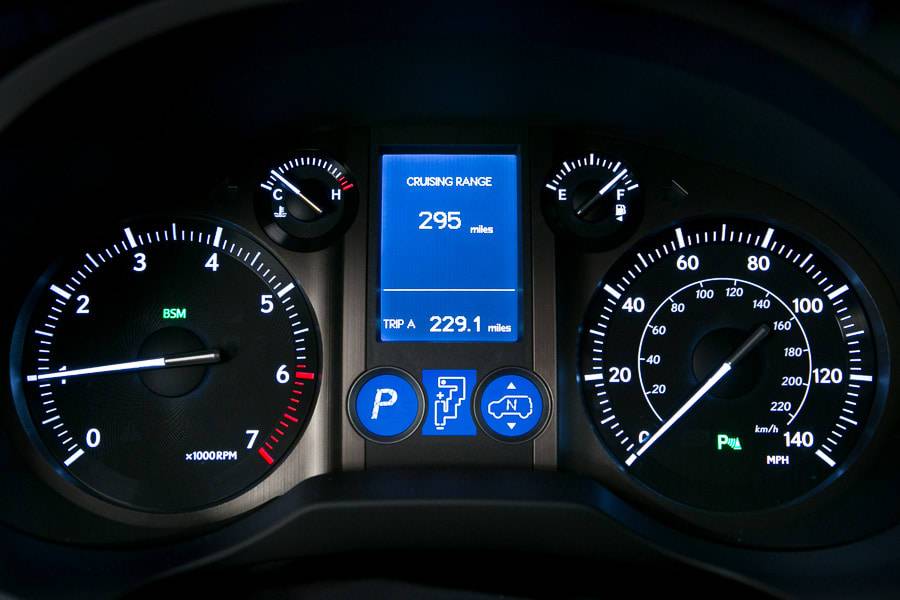 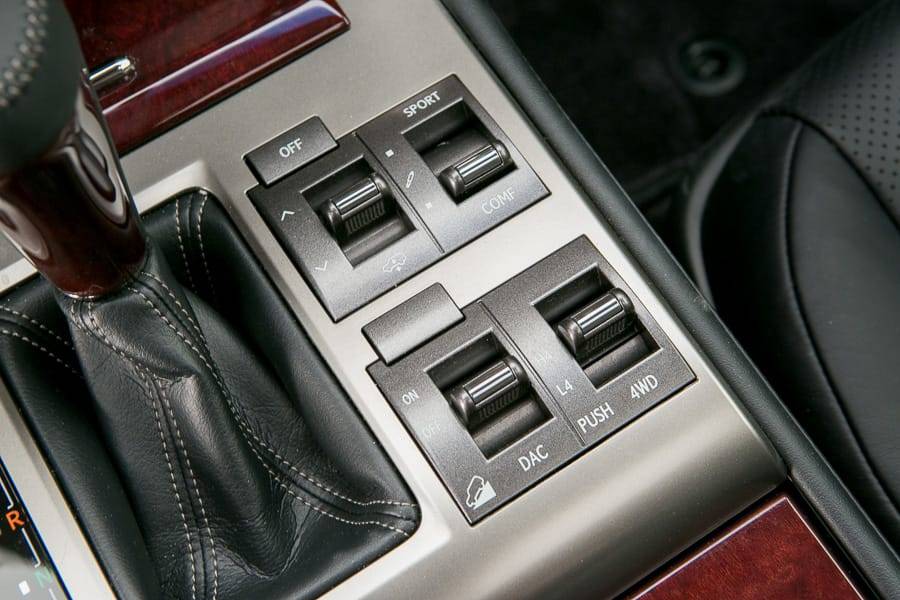 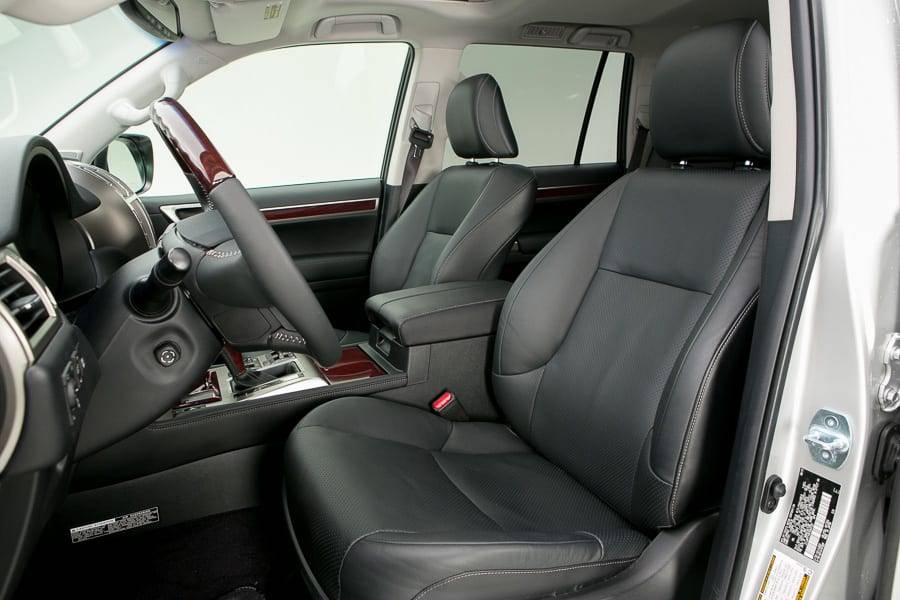 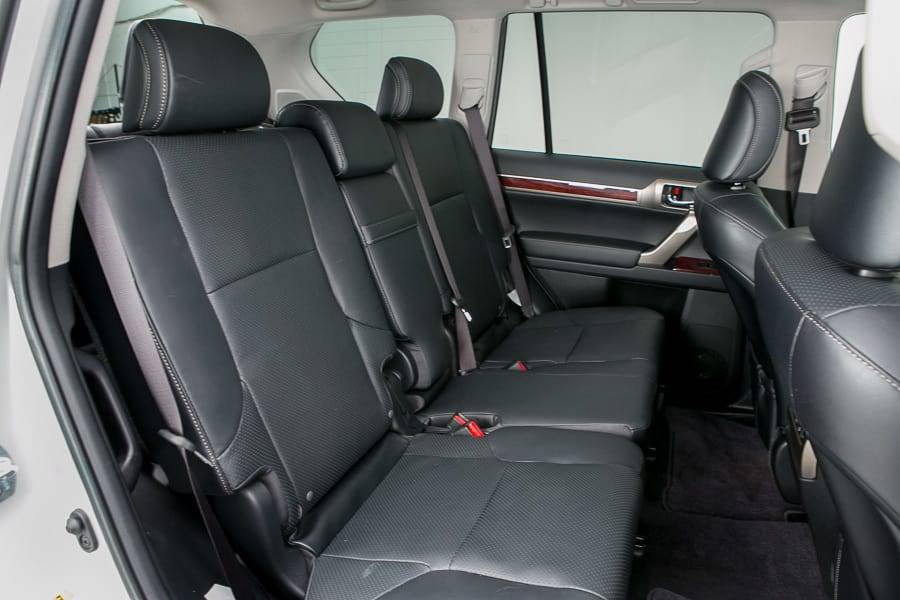 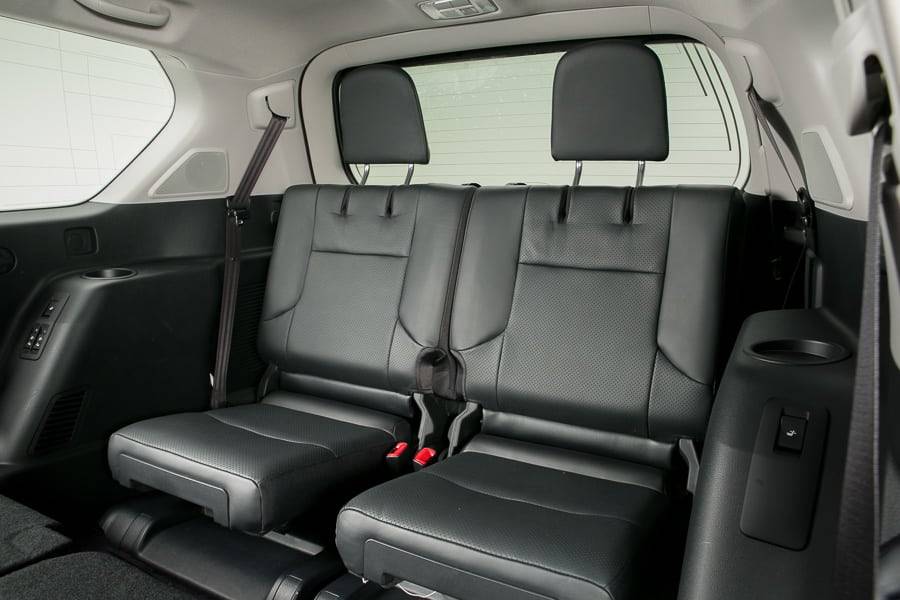 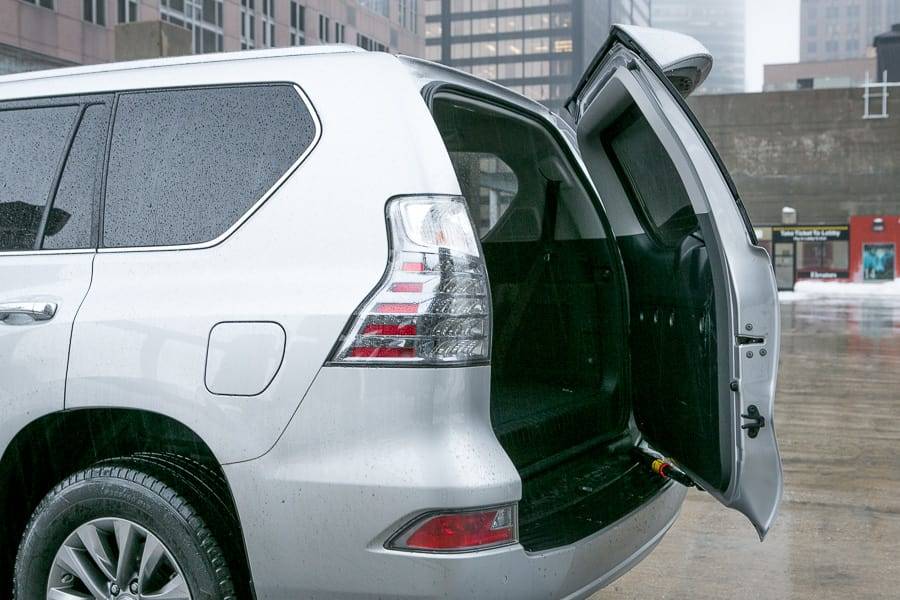 The Lexus GX 460 gets modern front-end styling for the 2014 model year, but this luxury SUV still has a throwback feel in the way it drives and accommodates passengers.

The GX holds up to seven in three rows of seats and comes standard with a Low-range four-wheel-drive system for off-road (or simply difficult) driving conditions. With its body-on-frame construction, the GX is one of two traditional SUVs in Lexus’ lineup, the other being the flagship LX 570.

Besides its all-new front-end look, there are new clear-lens taillights for 2014. The 2014 GX also offers a revised multimedia system and newly available safety features, like a blind spot warning system and rear cross-traffic alert. To see how the 2014 GX compares with the 2013 model, click here, or see how the GX’s specs compare to the Land Rover LR4, Mercedes-Benz M-Class and Audi Q7 here.

The GX starts at $49,995 (all prices include a $910 destination charge). Our test car was an uplevel Luxury trim, which starts at $61,625. The significantly higher price tag includes features like an adaptive suspension with rear auto-leveling, mahogany wood trim in the cabin, a heated steering wheel, heated second-row seats, a power-folding third row, semi-aniline leather upholstery and three-zone automatic climate control. Our GX also had a $1,145 Mark Levinson surround-sound system, which brought the as-tested price to $62,770.

Exterior & Styling
It’s hard to miss the new GX — whether you’re standing right next to it or across a parking lot. The defining feature is Lexus’ hourglass-style grille, which has been incorporated across the brand’s lineup of cars and SUVs.

In typical luxury-SUV tradition, the grille is gigantic; it stretches from the hood all the way to the bottom of the front bumper. It’s a daring design — some might say gaudy — and it commands your attention in a way few SUVs do. The grille’s aggressive shape is quite a contrast from the rest of the SUV, which has relatively reserved looks.

How It Drives
You’re reminded of the GX’s traditional SUV construction the moment you start driving. It’s not hard to get accustomed to the SUV’s size, but the amount of brake dive and low-speed body roll are a blast from the era of SUVs past. You just don’t encounter it that often anymore, especially in the luxury segment.

Once you get up to midrange and highway speeds, however, the driving experience evolves into something more contemporary. The ride is comfortable, if a little firm, and the GX tracks with a secure feel whether the roads are clear or snow-covered. There’s a switch on the center console for the adaptive suspension with Normal, Sport and Comfort settings, but ride-quality differences are slight; Sport tightens up the suspension a little and provides more road feel, while Comfort softens the ride some.

The GX’s sole engine is a 301-horsepower, 4.6-liter V-8 that works with a six-speed automatic transmission, and the engine is tasked with moving about 5,200 pounds of SUV. The GX doesn’t feel underpowered, but it’s wise to plan your high-speed passes so you have plenty of space to make them. On the highway, the GX cruises easily at 70 mph and the cabin is relatively quiet.

If you drive anywhere remotely civilized, the GX’s true capabilities will go unused most of the time, but certain situations make you appreciate what this SUV can do. The Chicago region was digging out from more than a foot of snow when I tested the GX, but with 8.1 inches of ground clearance and standard full-time four-wheel drive, driving around on unplowed side streets and alleys was a non-issue. The GX just plowed ahead and made its own path.

The GX’s mostly upscale materials include available mahogany wood trim and premium leather upholstery, but vast amounts of silver-colored trim put a damper on the cabin’s luxury vibe. It covers the middle of the dashboard and center console and is glaringly out of place in a $60,000-plus SUV.

The front seats offer a large-leather-recliner kind of comfort, but the second row isn’t ideal for adults. The seat slides forward and backward and also reclines, but the bottom cushions are close to the floor, so you sit with your knees angled up and don’t have a lot of thigh support. It’s another reminder of the GX’s body-on-frame platform, a design that’s not typically as space-efficient as the unibody construction used in crossovers.

The second row has a passenger-side walk-in feature to make third-row access easier, but the third row is small and really fit only for children.

Ergonomics & Electronics
Many Lexus models have adopted the automaker’s Remote Touch interface, which features a mouse-like controller that operates a cursor on a dashboard screen, but the GX still uses a touch-screen setup. It might not be as high-tech as Remote Touch, but it’s easier to operate while driving. The touch-screen’s home screen is now configurable and can show up to three different system features, but I would like to see physical fan-speed buttons added to the center control panel so you don’t have to use the touch-screen to make adjustments.

Bluetooth streaming audio is standard, and it was easy to pair my iPhone with the multimedia system. Music quality over Bluetooth is good. However, another editor who tried playing music from his iPhone through a USB port had trouble getting the connection to work.

Cargo & Storage
With all three rows of seats in place there’s only 11.6 cubic feet of cargo room, but that’s still more than the LR4 (9.9) and Q7 (10.9) offer. The GX’s third row nearly touches the rear window, leaving a shallow space for luggage that’s not very usable. Folding the third row increases cargo space to 46.7 cubic feet, and with the second row also folded there’s 64.7 cubic feet. The LR4 (90.3) and Q7 (72.5) both offer more maximum cargo room. The 60/40-split second-row backrest is spring-loaded, which makes it easy to fold but hard to raise — particularly the larger section.

The GX is one of the few SUVs that still has a swing gate instead of a liftgate. Since it doesn’t go up in the air, shorter people might find a swing gate easier to close, but this design makes it harder to load cargo when parked on a street. Hinged on the passenger side, the wide door opens to the curb and forces you to walk around it to get to the cargo area, which could be a problem if there’s a car immediately behind you. The GX’s considerable ground clearance and body-on-frame construction mean you have to clear a high cargo floor when loading luggage, too.

Storage amenities include a deep center console bin and large cupholders. A large owner’s manual takes up most of the glove box, however.

Safety
The GX hadn’t been crash-tested by the Insurance Institute for Highway Safety or the National Highway Traffic Safety Administration as of this writing.

Value in Its Class
Once commonplace, true luxury SUVs are a dwindling breed as automakers turn to luxury crossovers to give shoppers better on-road driving dynamics and gas mileage. The GX’s capability in extreme conditions is impressive, but so is that of its main competitor, the Land Rover LR4, which offers a more refined driving experience overall for similar money.

If you can live without real SUV capability, though, one of the models from the vast and expanding luxury crossover segment might be a better match for your everyday driving needs.