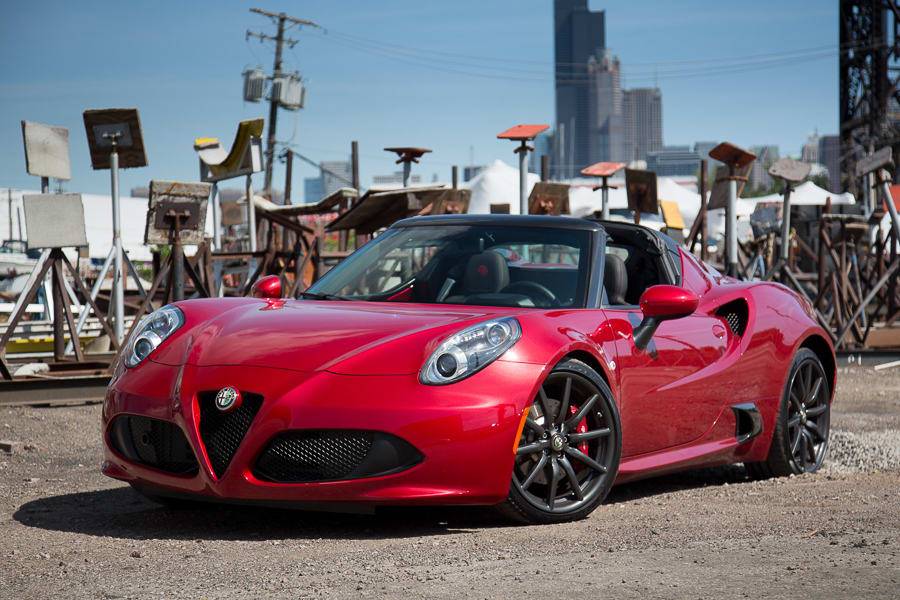 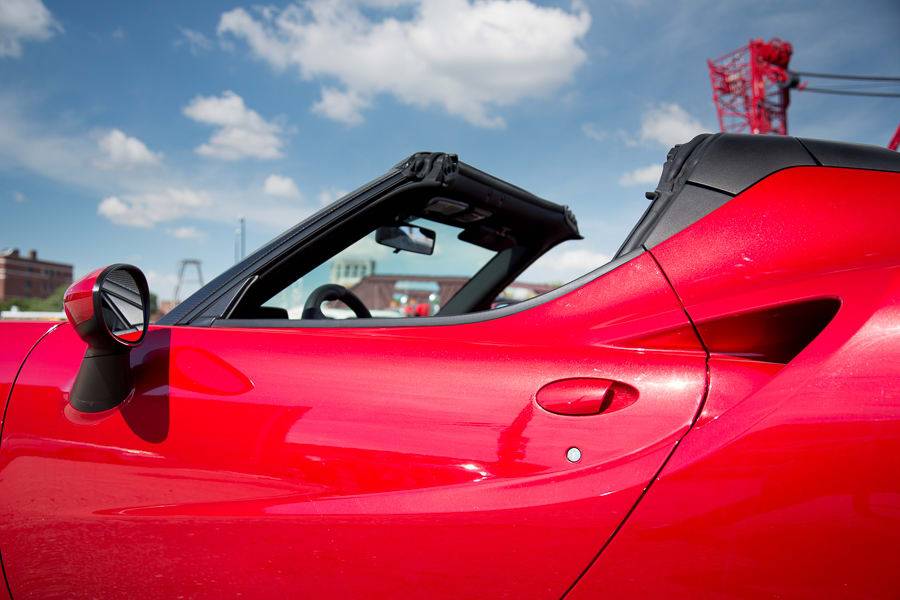 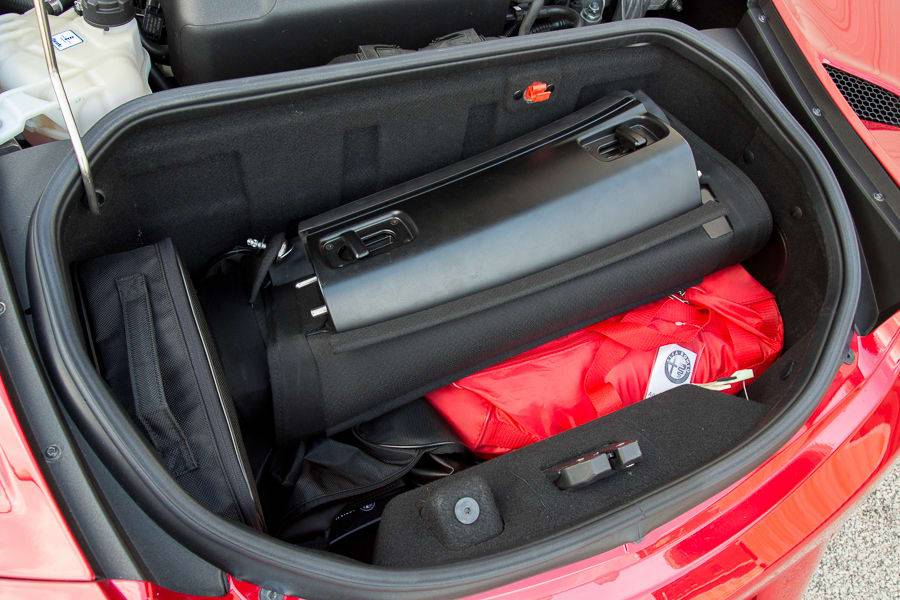 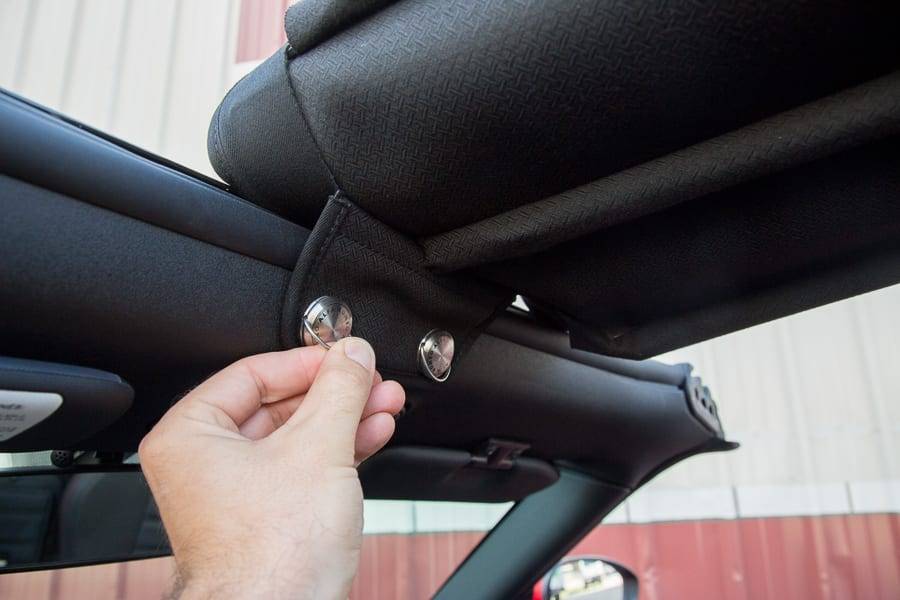 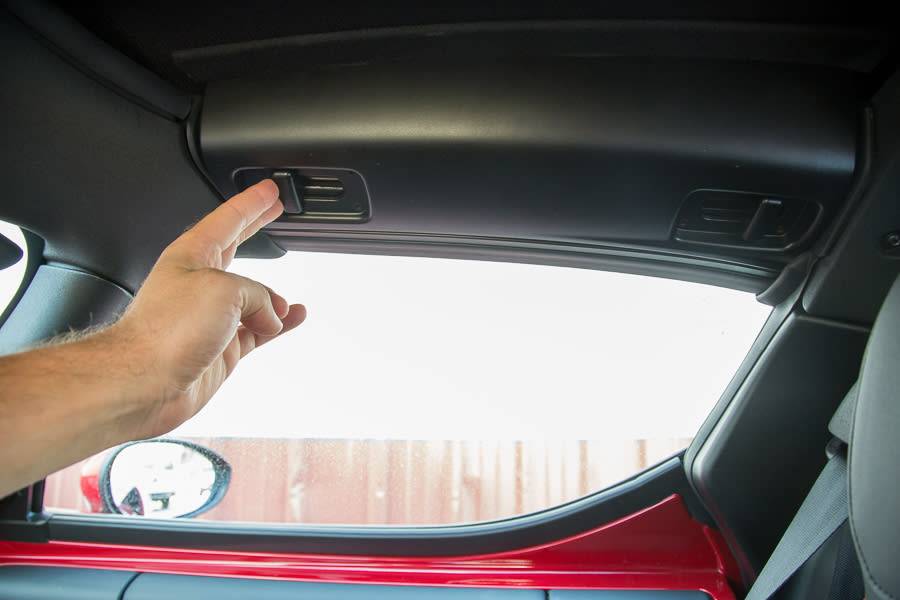 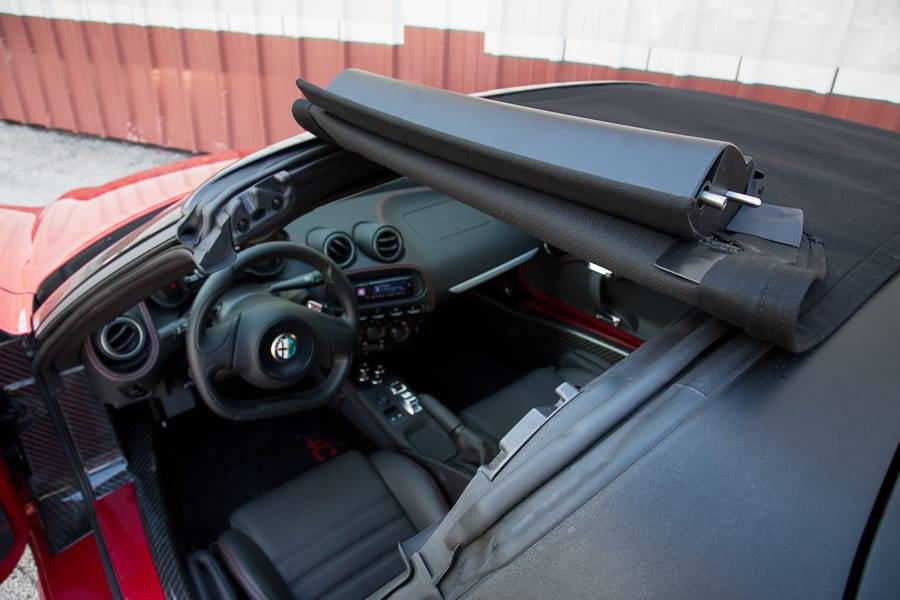 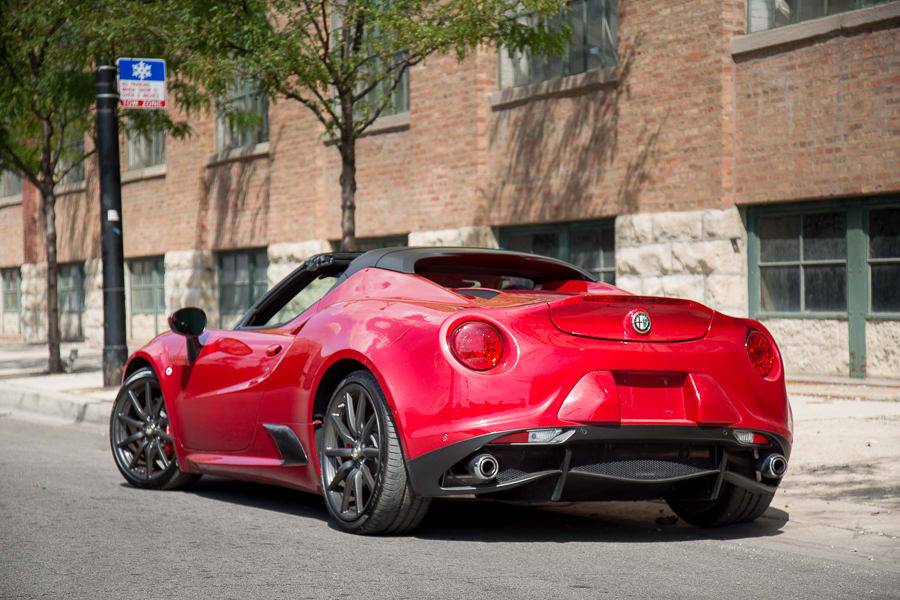 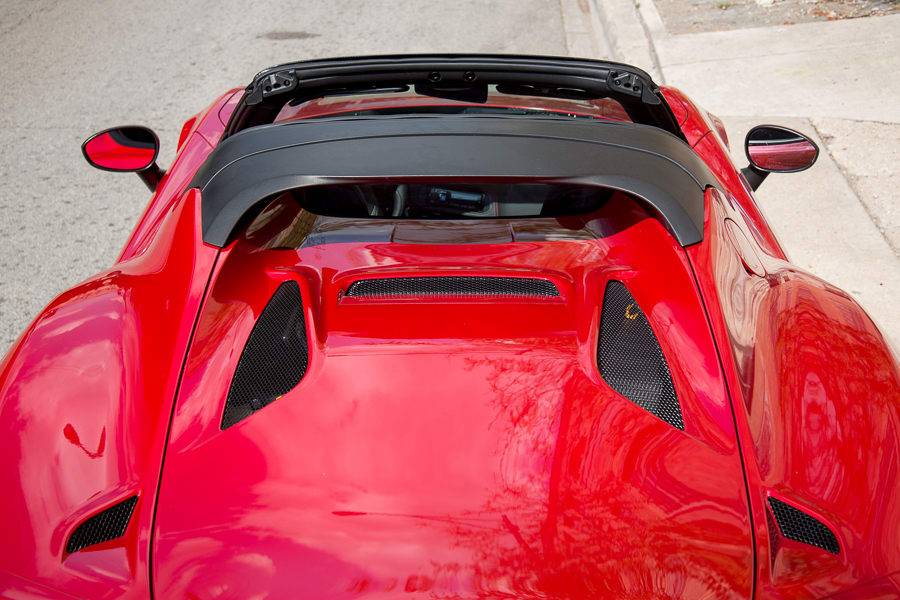 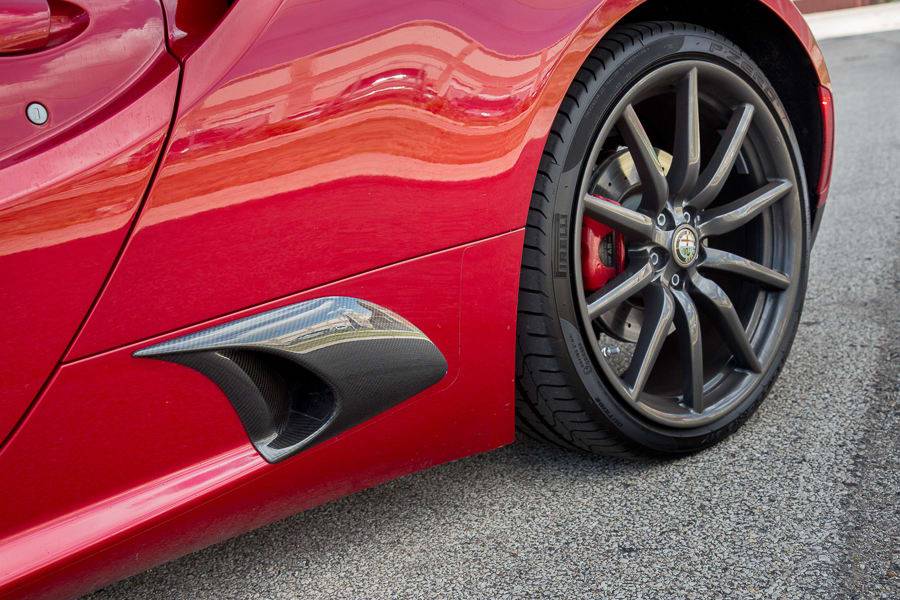 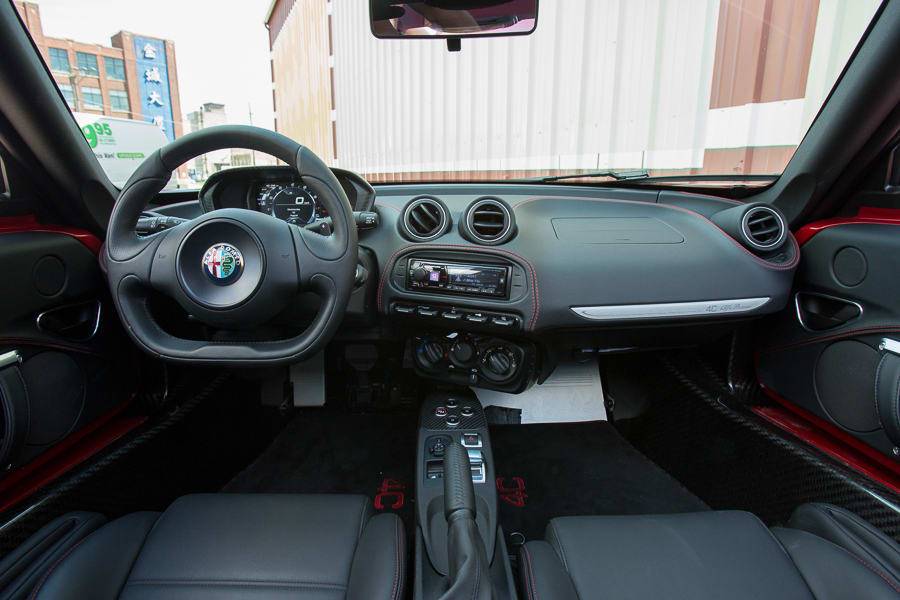 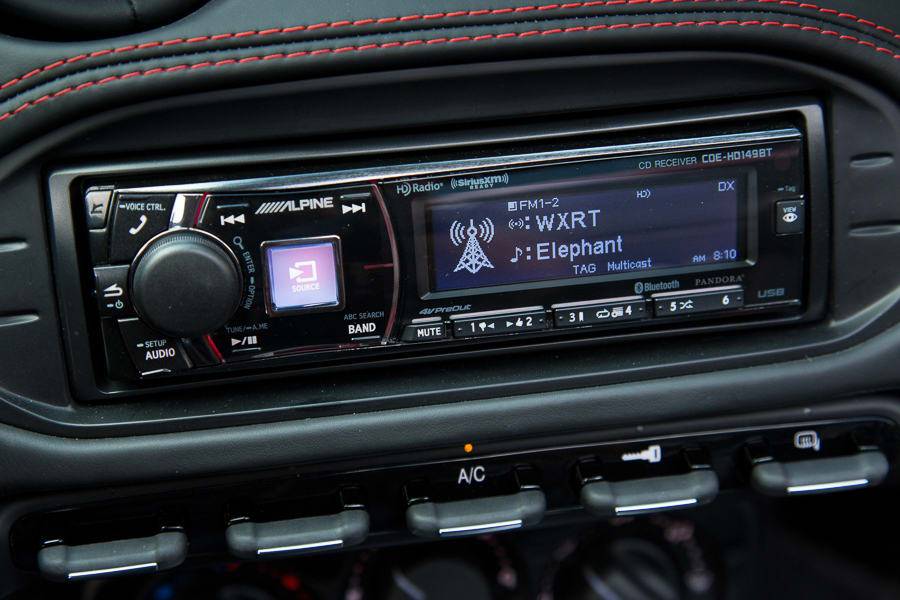 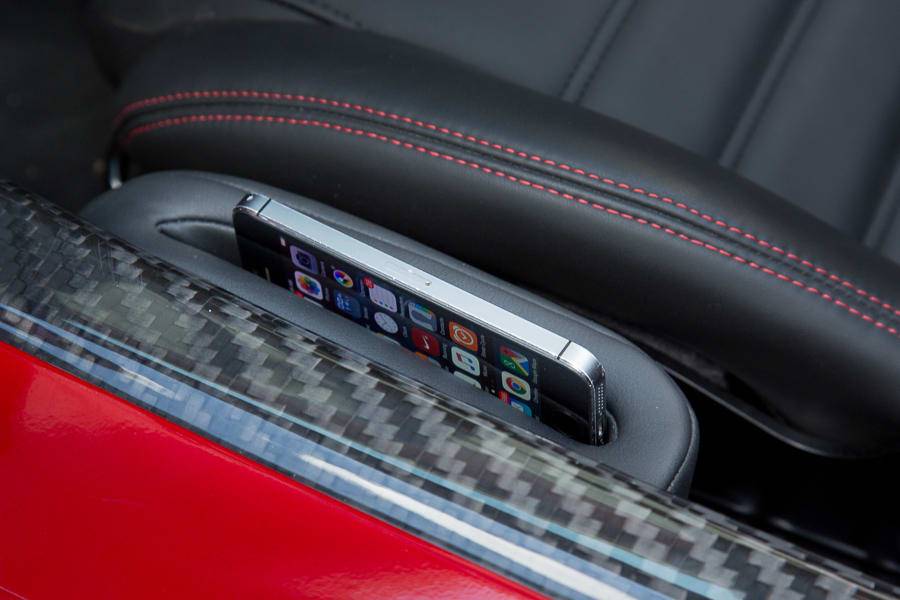 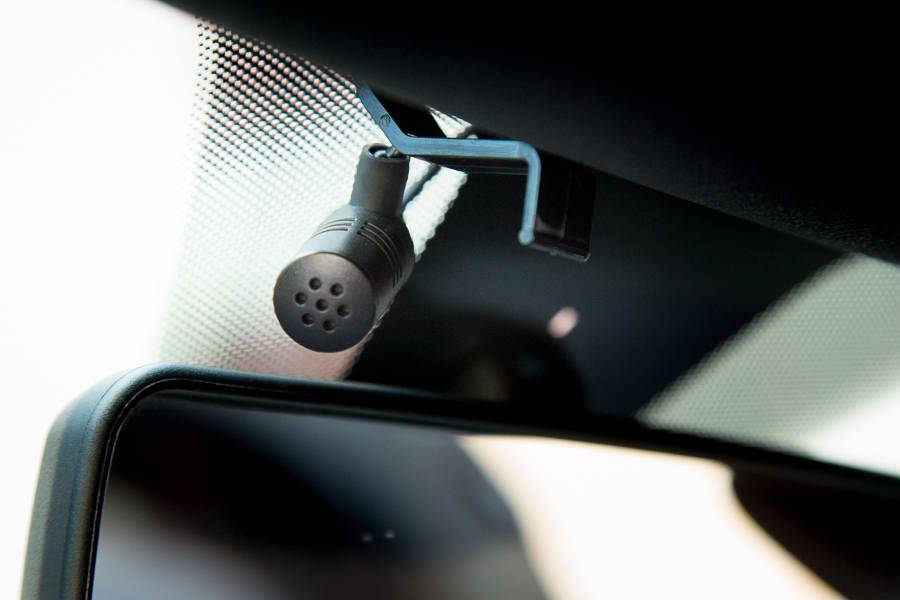 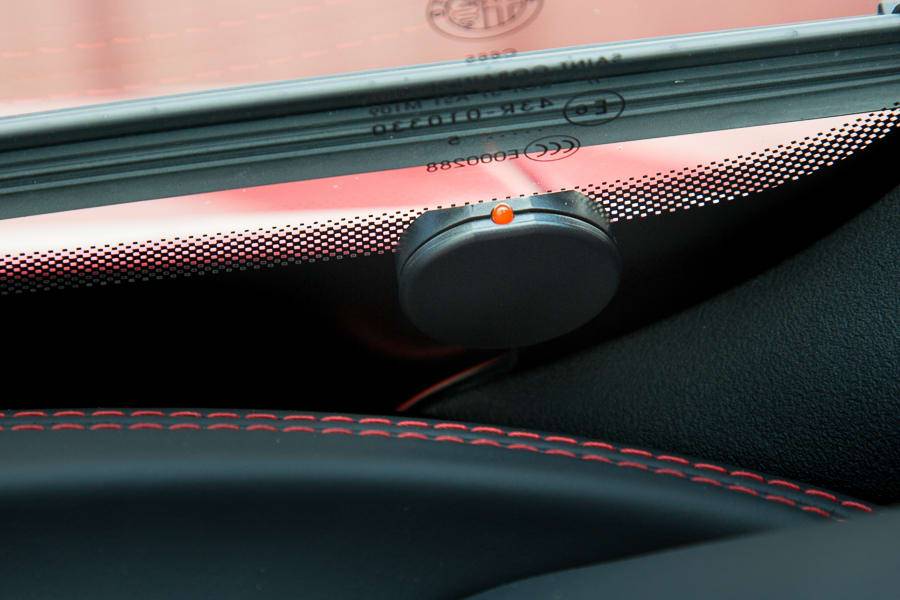 The Alfa Romeo 4C Spider remains a non-stop, high-performance thrill ride that at no point lets you forget its track-day capabilities, even with the top off.

Topless cars called spider or spyder conjure images of cruising down a coastal highway or a bustling downtown boulevard, the wind blowing through your hair and your left arm hanging out the window, under the sun or in the glow of downtown lights. The 2016 Alfa Romeo 4C Spider ain’t that car.

The 4C Spider isn’t a traditional convertible; it has a removable center roof section, like the 2016 Chevrolet Corvette coupe or 2016 Porsche 911 Targa. It’s removed manually, more like the Corvette than the wild “Transformers” operation of the Porsche’s top.

Exterior & Styling
Little more than the removable cloth top makes the 4C a spider; the coupe’s racy shape is mostly intact, though the super sexy rear roofline is slightly less swoopy in convertible form, and you lose the rear hatch window that provides a glimpse into the engine compartment. Replacing the coupe’s hatch is a new rear deck lid with five functional heat extractor vents.

According to an Alfa Romeo spokesman, the 4C Spider gains only 22 pounds over the coupe thanks to the carbon fiber monocoque’s already-rigid construction. Engineers had to add minimal structural components to retain the car’s signature rigidity. That’s not too surprising, considering the top’s open space when removed is roughly the size of a large moonroof. Compare coupe and Spider specs here.

How It Drives
The 4C Spider retains 100 percent of the coupe’s raucous, wildly entertaining demeanor. It snarls, spits and grips its way around a racetrack with the precision of a purpose-built handling machine. Lesser cars turn into wet noodles when their tops come off, but the 4C keeps its chassis stiffness with the center roof removed thanks to its extremely rigid carbon fiber passenger cell. It uses a Spider-specific engine compartment cross-beam, unique body brackets and a specially contoured aluminum roll bar to maintain rigidity.

A 237-horsepower, turbocharged 1.7-liter four-cylinder and six-speed dual-clutch automatic transmission make the 4C a screamer with its low 2,487-pound curb weight. The lack of power steering keeps weight down and steering feel heightened, making for a great deal of fun on the racetrack. It’s less of a thrill on the street, where a wooden-plank-stiff ride has you on constant alert for potholes to avoid.

With the top off, the 4C allows a refreshing amount of outside air into the cabin, though it’s far from a proper convertible experience. The wind rushes into the passenger compartment and gently swirls behind your head, rather than beating you up, as in some droptops. At speed, I didn’t observe the typical wind buffeting of a removable-top car, like the Corvette, and overall the 4C Spider’s top-off experience is fairly enjoyable given how little of the roof is removable.

The ridiculously loud nature of the optional $500 racing exhaust is ever so apparent in the less-insulated 4C Spider. There just isn’t much between you and the outside thanks to the thin cloth roof, which rolls up into a camping-tent-size bag. Whistling from the turbocharger and every bark from the exhaust is amplified big time compared with the coupe, which is great if you’re into that kind of stuff; I am, and it’s a thrill.

Conversely, bad noises are also rampant in the cabin. The 4C coupe isn’t exactly a quiet car, so replacing the hard top with a cloth top means there’s a constant rustling of wind and road noise bad enough that you might frequently tug on the window switch to make sure the windows are up. In my experience, they always were.

Interior
Removing the 4C Spider’s top is more complicated than it should be. It’s not as convoluted as a Jeep Wrangler’s soft-top, but it’s more annoying than the Corvette coupe’s removable carbon fiber panel. The 4C works more like the Porsche Boxster Spyder’s manual operation, where you have to release a piece of cloth from several points, fold it up and then tuck it away.

The first step is to unscrew two center-locking twist pins inside the cabin, which truly have threaded tips requiring several full revolutions. Then, release the outboard sides of the top by pulling spring-tensioned bolts inward toward each other. Roll the sides to the center one at a time, then remove the rolled-up top and place it in a trunk.

Even with all those steps, it sounds a lot easier than it is in use, as the top always wants to fall into the cabin before it’s fully unhinged. I’m sure I could have made it a more graceful operation with more practice, and another helping hand.

Once removed, the top stores in the trunk, where it pretty much takes up most of the usable space. The Corvette’s removable top — one rigid piece — is much easier to remove and clip into the hatch as a one-man operation.

Visibility isn’t much different from in the 4C coupe because the top doesn’t come completely off, so the 4C’s chunky rear end still impedes much of the rear view.

Ergonomics & Electronics
The 4C Spider is very much a driving machine, so anything that doesn’t make it drive seems lazily executed, including conveniences like the stereo, Bluetooth and security system. An optional Convenience Group for $1,800 adds a “premium” stereo and speaker package, a security system, cruise control and rear parking assist. The rear parking assist is much needed given the car’s poor rearward visibility, but the optional Alpine stereo is a complete waste of money.

The stereo needs to be decent to overcome the hellacious noise produced by this car, but the 4C’s stereo distorts at the necessary high volumes. Then there’s the shabbily integrated Bluetooth, with a microphone that hung down like it was installed by a high school shop student. That same kid also must have installed the security system and forgotten to tuck away the wiring. USB and MP3 pigtail connections with the same lackadaisical integration are tucked into a pocket where you’d normally find a glove box.

Here’s the good news: The 4C is most enjoyable with the stereo off — one, because it’s awful, and two, because the 4C already makes plenty of wonderful noise from the engine and exhaust that will be music to any driving enthusiast’s ears.

Cargo & Storage
Luggage room in the 4C coupe and Spider is the same, at 3.7 cubic feet. The trunk is the only place to store the removed roof, though, so it takes up a sizable chunk of real estate. The Porsche Boxster S’ roof folds into its own compartment, leaving 4.6 cubic feet of trunk space in the back as well as 5.3 cubic feet in a front trunk. The Corvette convertible’s roof also folds into its own compartment, leaving that car’s 10 cubic feet of cargo space untouched. In the Corvette coupe with a removable top, the roof clicks into the rear hatch area and pivots up and down to allow storage underneath the stowed panel.

The 4C’s passenger compartment also leaves a lot to be desired. It practically lacks storage provisions, though there are removable pockets on the outboard sides of the seat cushions that hold cellphones quite well, plus a cubby box between the seats with enough room for a wallet and cellphone. There’s also one cupholder.

Safety
The 4C has not been crash-tested, and chances are it won’t be considering its low production volume. Safety features include the federally mandated electronic stability system, antilock brakes and front airbags. There are also door-mounted side-impact airbags and a knee airbag for the driver. A backup camera isn’t offered, even though one is much needed thanks to the car’s poor rearward visibility. Be sure to get the Convenience Package, which includes rear park-assist sensors.

Value in Its Class
Our 4C Spider’s $73,395 as-tested price won’t get you a fully loaded Boxster, but $74,835 can get you a decently equipped 2016 Boxster S with navigation, Bose stereo, seven-speed dual-clutch automatic transmission, sport suspension, backup camera, and front and rear park assist. Porsche’s ancillary features are integrated like you’d expect in a factory car, not like an array of aftermarket stuff installed at a corner speaker shop. Plus, the Boxster’s power top opened in as little as 9 seconds in our previous test of the current generation.

In the Corvette camp, $73,370 gets you a 2016 Z51 Performance Package convertible with an eight-speed automatic, Bose stereo, head-up display, front-curb cameras, backup camera, navigation, Apple CarPlay and more, along with a power-retractable soft-top. The Vette with the Z51 package is track-ready, just like the 4C.

Contemplating whether to spend as much on a 4C Spider as a Corvette Stingray Z51 or Boxster S isn’t really the question. Rather, is the extra $10,000 over the cost of a 4C coupe worth the Spider’s open-air experience? I’d argue no, given the limited outdoor exposure and the top’s inconvenient operation. The 4C is a special car in either form, though — definitely one you won’t see out in the wild very often, as you will the aforementioned cars. Alfa has sold only 497 since it went on sale this summer, and Cars.com shows only 14 Spiders and 24 coupes in its national dealer inventory. The 4C may be quirky in some regards, but its dedication to high performance and exclusivity are big parts of its appeal.