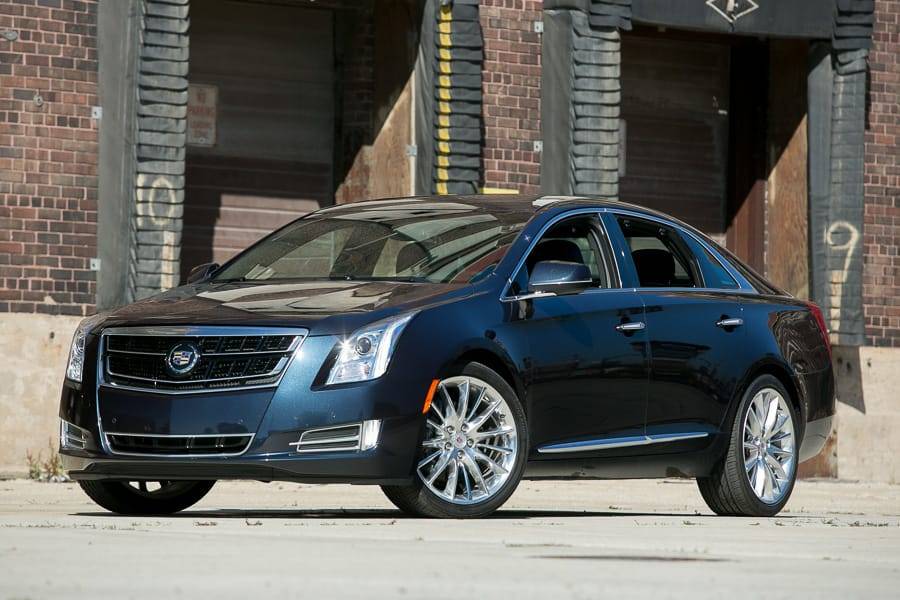 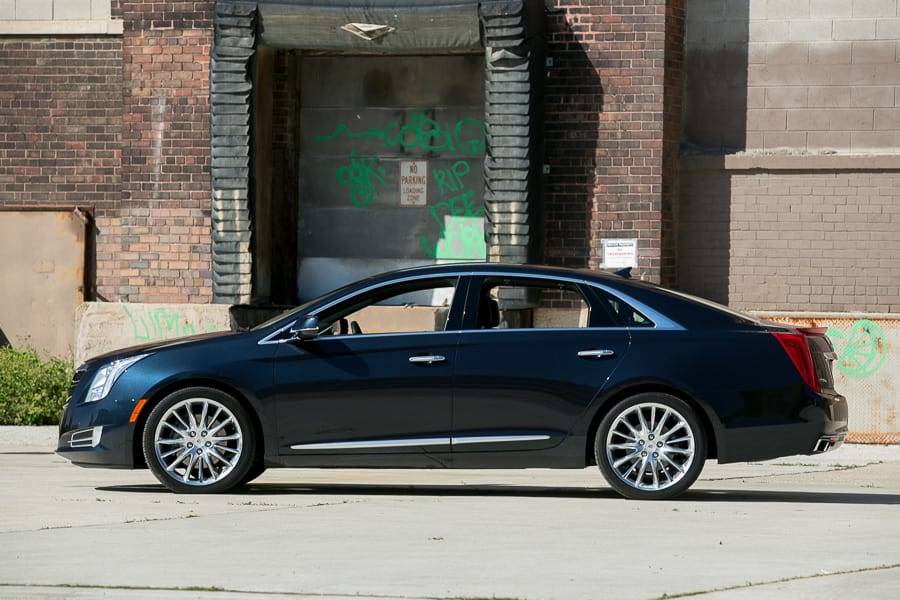 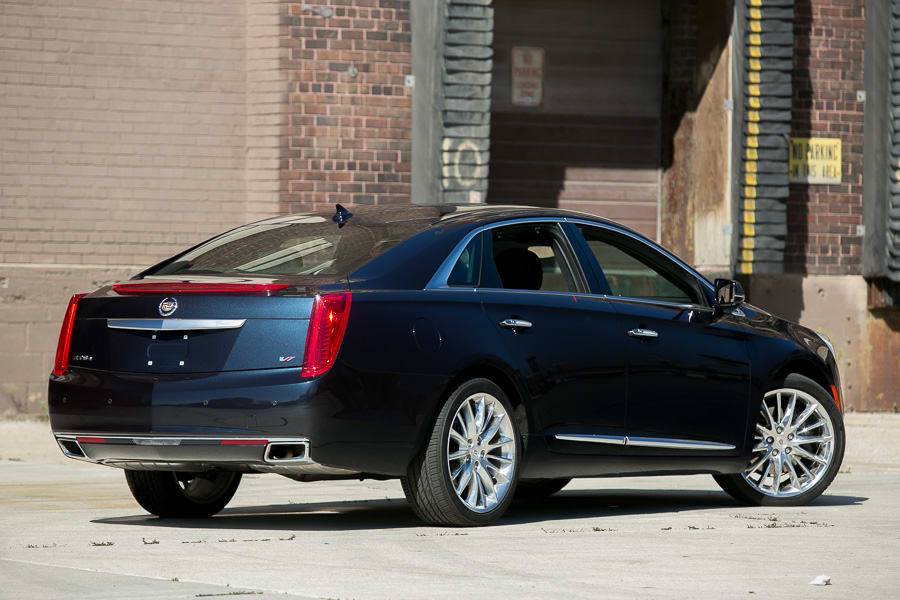 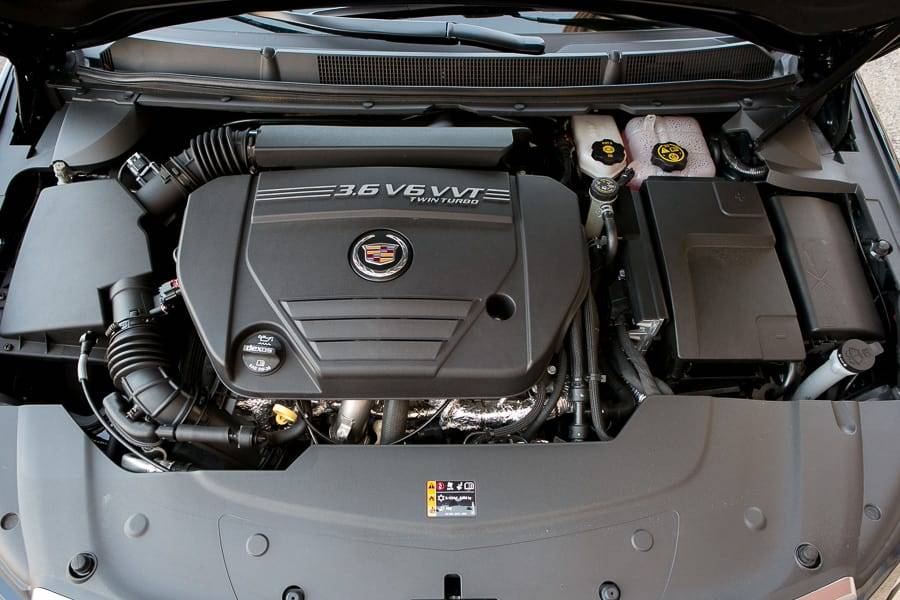 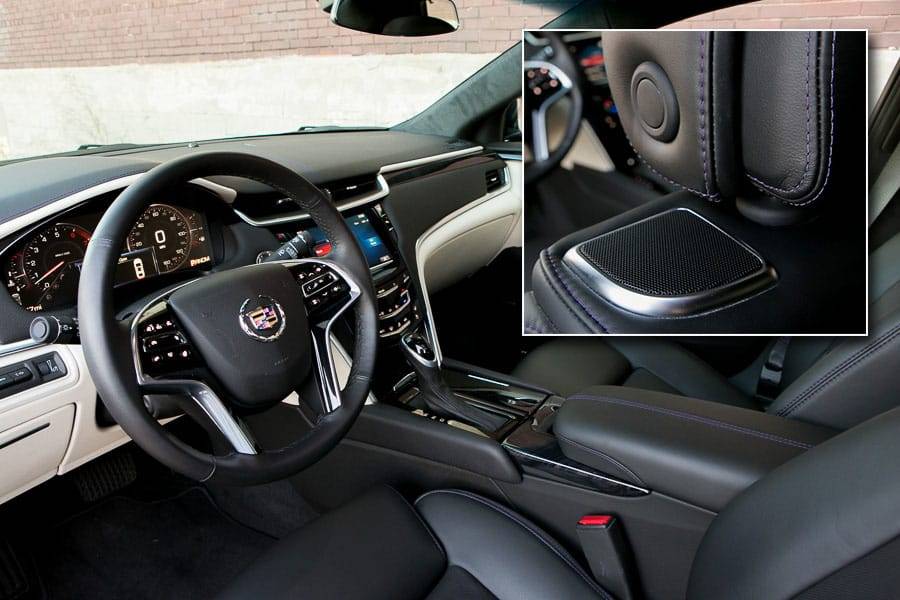 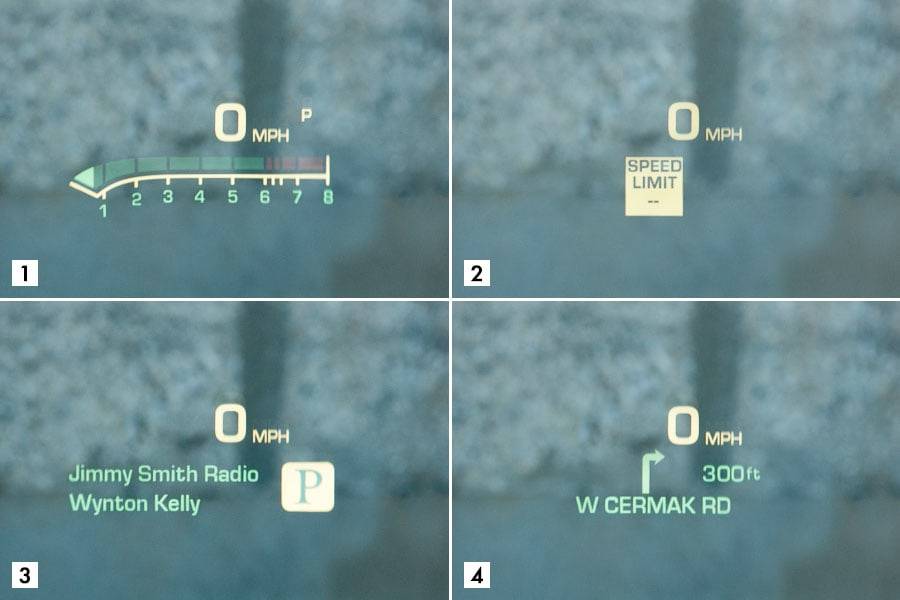 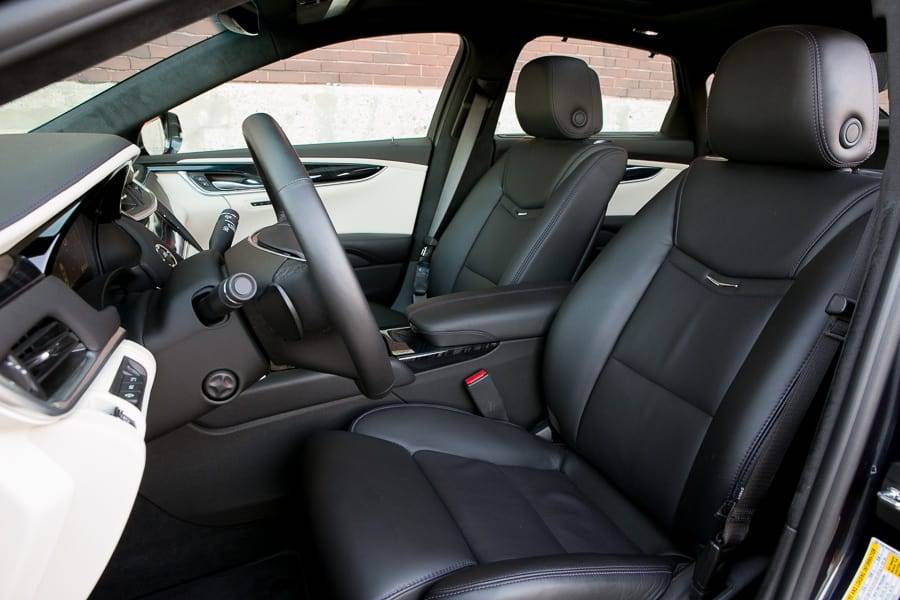 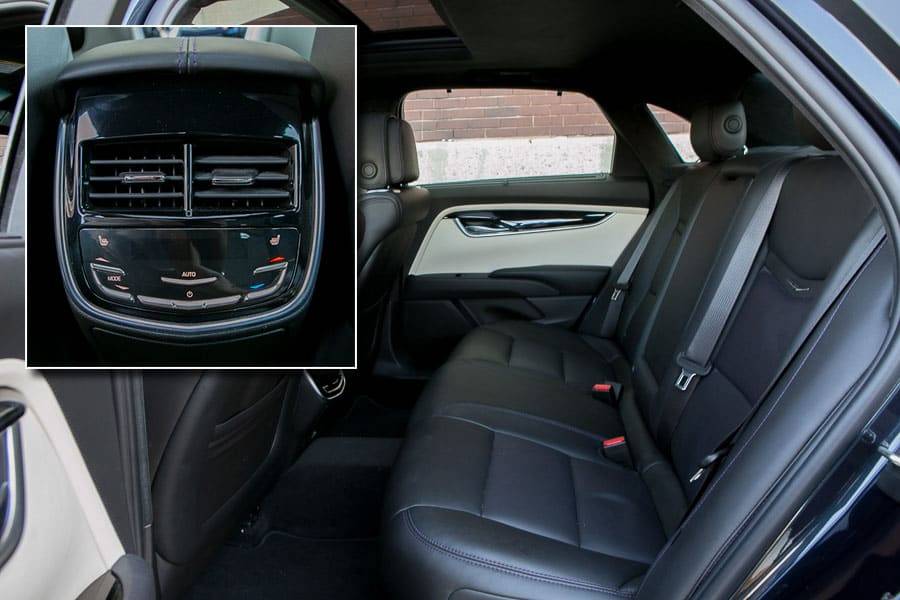 Editor’s note: This review was written in November 2013 about the 2014 Cadillac XTS. Little of substance has changed with this year’s model. To see what’s new for 2015, click here, or check out a side-by-side comparison of the two model years.

With its new twin-turbo V-6 engine, the 2014 Cadillac XTS Vsport boasts a compelling blend of performance and luxury that’s diminished by a too-firm ride.

The XTS is the largest car in Cadillac’s lineup. It’s also the only one based on a front-wheel-drive platform, though all-wheel drive is available. The biggest change for 2014 is the newly available 410-horsepower, twin-turbo V-6, but the car also gains more features, like rear entertainment and a self-parking system. To see the 2013 and 2014 versions compared, click here.

Primary competitors include the Acura RLX, Lincoln MKS and Volvo S80 (see them compared), but well-equipped XTS models also compete against cars from Audi, Infiniti and Lexus. The XTS starts at $45,525 including a $925 destination charge, but the sticker price of the all-wheel-drive XTS Vsport Platinum we tested was $70,020.

How It Drives
A soft, cushy ride has defined Cadillac’s large cars for generations — until now. The XTS breaks from that tradition by letting you feel bumps and breaks in the road, even in the adjustable suspension’s normal mode. Magnetic Ride Control, GM’s adaptive suspension technology, is standard, and selecting the system’s Sport mode makes the ride even firmer. The Platinum trim level also comes with 20-inch wheels wrapped with P245/40R20 all-season tires. These low-profile tires likely amplify the firm ride; 19-inch wheels with slightly taller 45-series tires are standard.

After experiencing both suspension modes, I wanted a more comfort-oriented normal mode — not as soft as Cadillacs past, but something that recognizes the XTS for what it is: a full-size sedan, not a sport sedan.

The firm suspension does a great job controlling body roll, however. I noticed some mild pitching, but that’s the only thing that reminds you the XTS is a large car.

The twin-turbo V-6 in Vsport models is delightful. The engine’s smooth, forceful acceleration transforms the XTS from a car that has decent power with its base V-6 to one with sports-car quickness.

We have our friend, Mr. Torque, to thank for this. The base V-6 makes 264 pounds-feet of torque at 5,200 rpm, while the twin-turbo V-6 produces 369 pounds-feet at just 1,900 rpm. Considerably more torque at considerably lower rpm equals a wider grin on your face. The XTS swiftly quickens the pace when you jab the gas pedal at highway speeds, and it squats down and lunges forward when you floor the pedal, letting out a refined roar.

The twin-turbo V-6 teams with a responsive six-speed automatic transmission. Though it made some lurching shifts in heavy rush-hour traffic, when the road is clear the transmission has a keen sense for what you want the car to do and quickly chooses the right gear. Automakers frequently tout their transmissions for having seven, eight and even nine speeds, but what really matters is how they perform in the real world, and the XTS’ six-speed automatic is exceptionally intuitive.

Choosing the twin-turbo V-6 brings all-wheel drive, and this version of the XTS gets an EPA-estimated 16/24/19 mpg city/highway/combined. That’s not much less than all-wheel-drive versions with the base V-6 (17/26/20 mpg). Front-wheel-drive cars are the most efficient, with an EPA rating of 18/28/21 mpg.

The XTS has large, vented brake rotors and Brembo-brand front calipers. Pedal feel is consistent and natural to a full stop.

Interior
The top-of-the-line Platinum interior is as good as anything from Audi, BMW or Lexus. The leather-wrapped and wood-trimmed cabin feels rich and elegant, enhanced by unique design cues like perforated dashboard trim and purple accent stitching. There’s no wind noise in the cabin, even at highway speeds, but you hear tire noise as the road surface changes.

Heated and ventilated front bucket seats are optional. The seats provide firm support, and I felt fine after a two-hour drive. I’m 6-foot-1, but a shorter editor had a sore upper back after a 30-minute trip. You feel the individual cushions that make up the seat, kind of like a dentist’s chair.

The view out the rear window from the driver’s seat isn’t great. The trunk is pretty tall, and that prevents you from seeing what’s right behind the car. Large C-pillars limit side-to-side views when backing up. A backup camera is optional but necessary; it provides the low-angle view behind the car that’s missing. (Rear parking sensors are standard.)

There’s lots of backseat legroom; with the driver’s seat adjusted for me, I still had four or five inches between my knees and the back of the front seat. Headroom is decent and the side windows are large enough to ward off claustrophobia. The back door armrests are narrow, though.

Ergonomics & Electronics
All XTS trim levels come standard with Cadillac User Experience. CUE is a multimedia system that consists of an 8-inch touch-screen in the center of the dashboard and a touch-sensitive panel below it. The system has haptic feedback, too; the controls pulse when touched.

The CUE touch-screen is more responsive than the one paired with Ford’s MyFordTouch, and the haptic feedback makes it easier to know when you’ve changed one of the touch-sensitive panel’s controls. However, the system isn’t as fast as Chrysler’s Uconnect, which has an easy-to-understand touch-screen interface supplemented by physical knobs for stereo volume, fan speed and radio tuning, which beat touch-sensitive panels any day from an ease-of-use standpoint.

The touch-sensitive panel requires a good amount of pressure before it’ll change the cabin temperature, for instance. The optional rear-seat climate controls also have a touch-sensitive panel like in front — sort of a mini CUE — but without the haptic feedback. Interestingly, these are much more responsive than the main CUE system; just a slight tap changes the temperature or climate mode.

CUE offers a number of different ways to bring portable media into the car, with USB connectivity, an SD card slot, an MP3 jack and Bluetooth streaming audio. Options include a navigation system, a color head-up display, a digital instrument panel with a 12.3-inch screen in place of the standard analog dials, and a dual-screen rear entertainment system that can play Blu-ray discs.

Cargo & Storage
The trunk measures 18 cubic feet. Lifting the trunklid reveals a wide opening. While the trunk is deep, it’s not that tall. The trunklid is supported by arms that move within enclosed spaces at the sides of the cargo area, so you don’t have to worry about them inadvertently crushing your groceries. A power-operated trunklid isn’t offered.

The standard 60/40-split backseat folds nearly flat with the cargo floor to reveal a wide-but-not-tall opening between the trunk and cabin. The larger backrest section is heavy to lift. There’s also a lockable center pass-through, which is useful for carrying long items while preserving outboard rear seating.

Storage areas include a small glove box, door pockets, a center console bin and a large cubby to the left of the steering wheel. There’s also a hidden storage area behind the center control panel; it opens when you touch its lower edge.

Safety
The XTS has been recognized as a 2013 Top Safety Pick by the Insurance Institute for Highway Safety and received an overall score of five out of five stars from the National Highway Traffic Safety Administration for its crash-test performance.

For a full list of safety features, check out the Features & Specs page. See how child-safety seats fit in the Car Seat Check.

Value in Its Class
Even at its most expensive, the XTS represents something of a value buy when compared with flagship full-size luxury sedans from Japan and Germany while still offering the kind of luxury accommodations and performance expected in that class. More moderately priced XTS versions from $50,000 to $60,000 come with many of the sedan’s defining elements, like CUE, as well as luxury features like heated front and rear seats, leather upholstery and wood trim.

There’s still room at the top of the Cadillac lineup for a traditional flagship luxury sedan. Until there’s a car like that, however, there’s enough variety in the XTS lineup for it to compete with a broad spectrum of luxury cars.