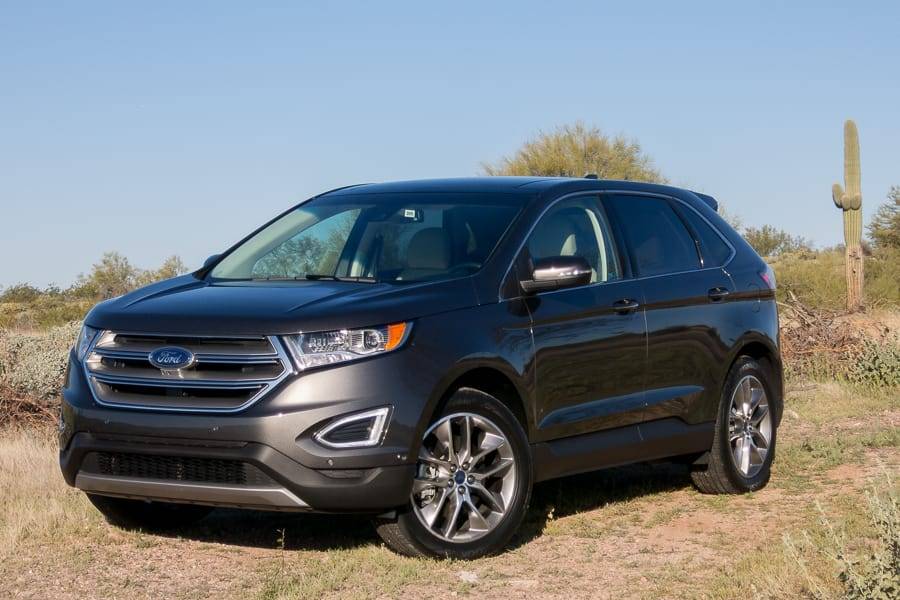 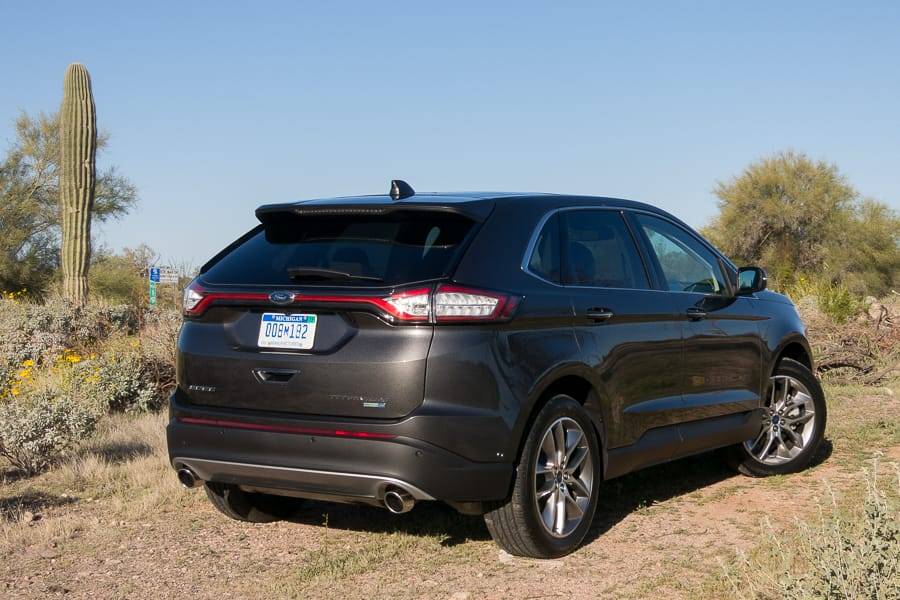 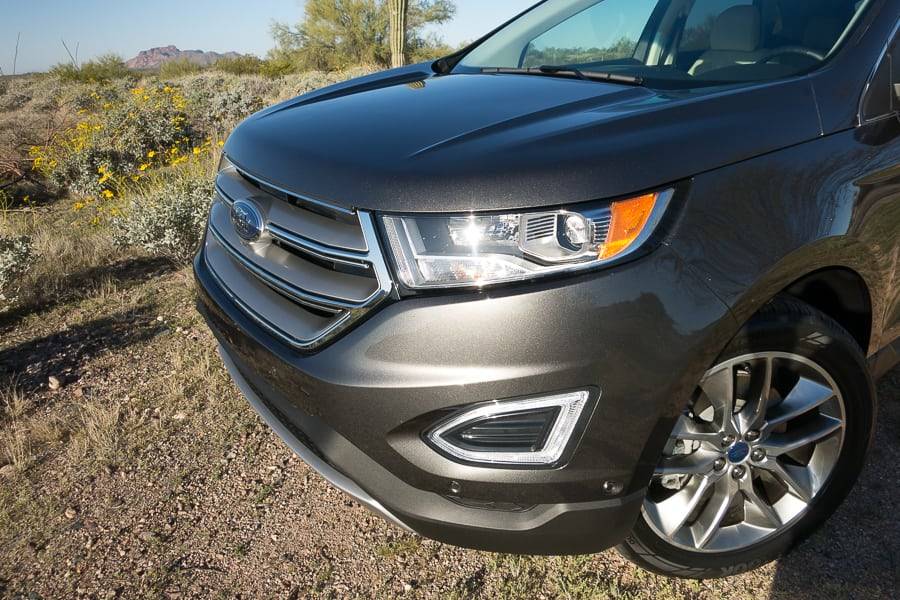 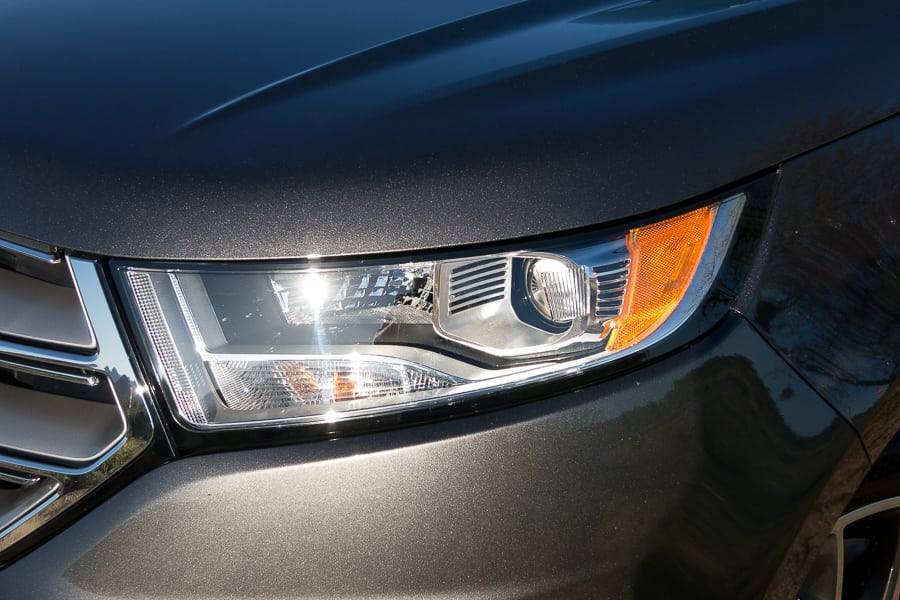 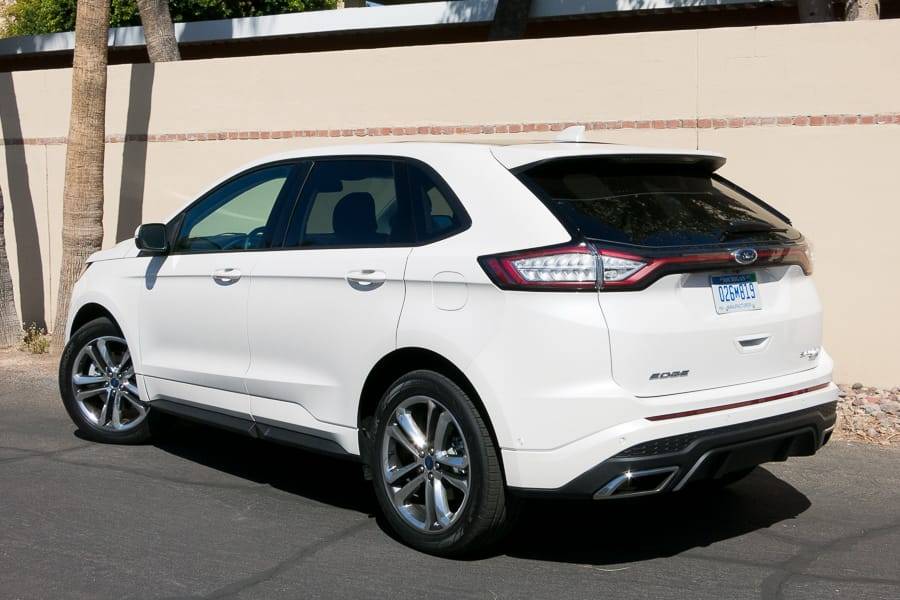 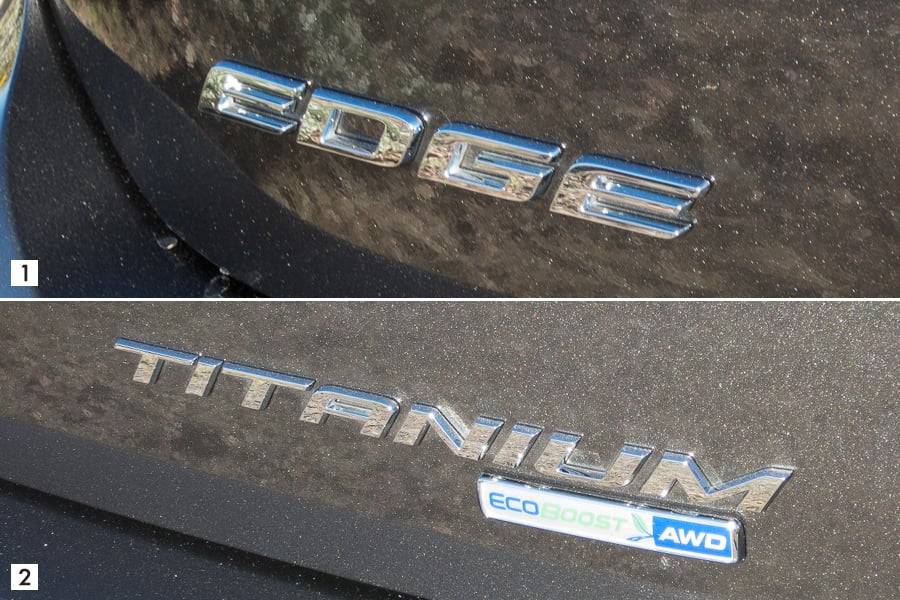 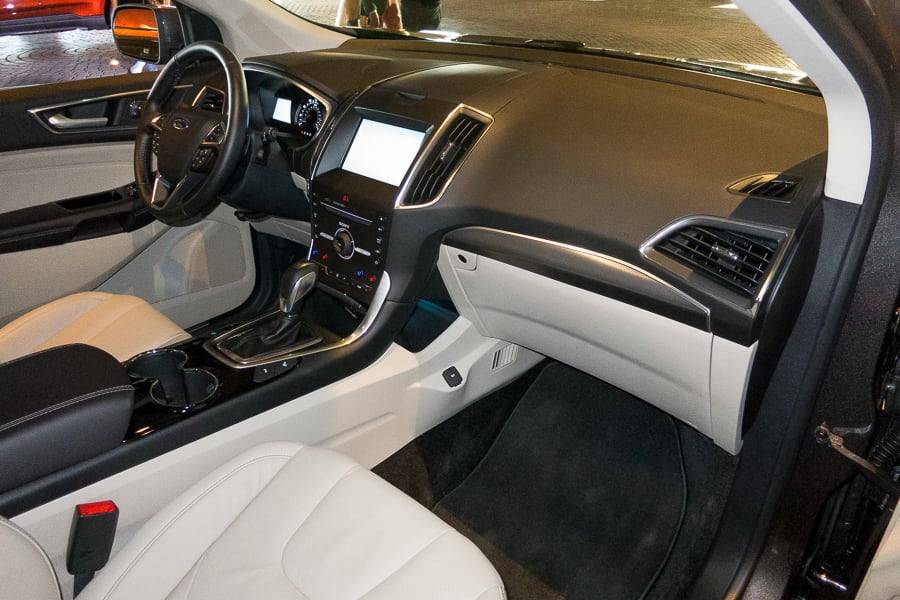 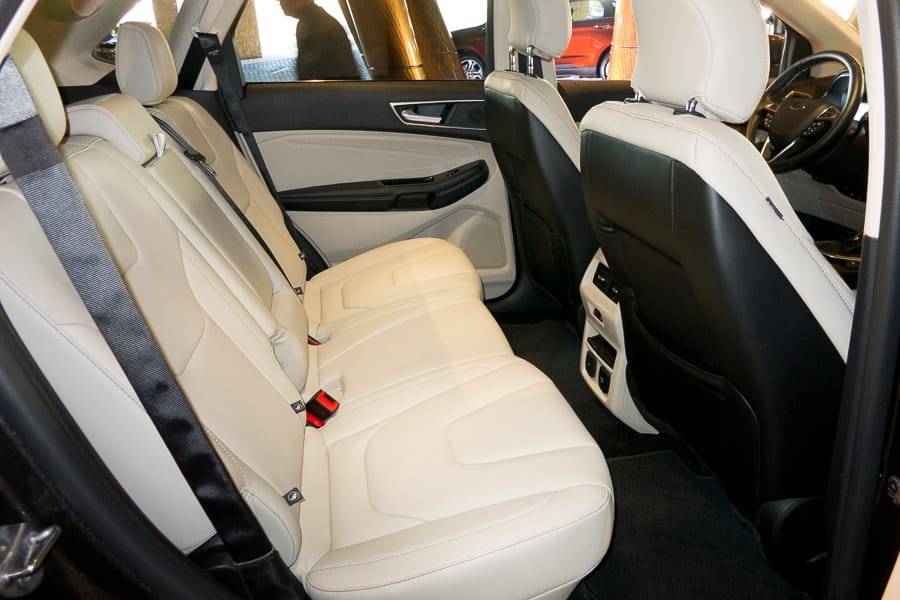 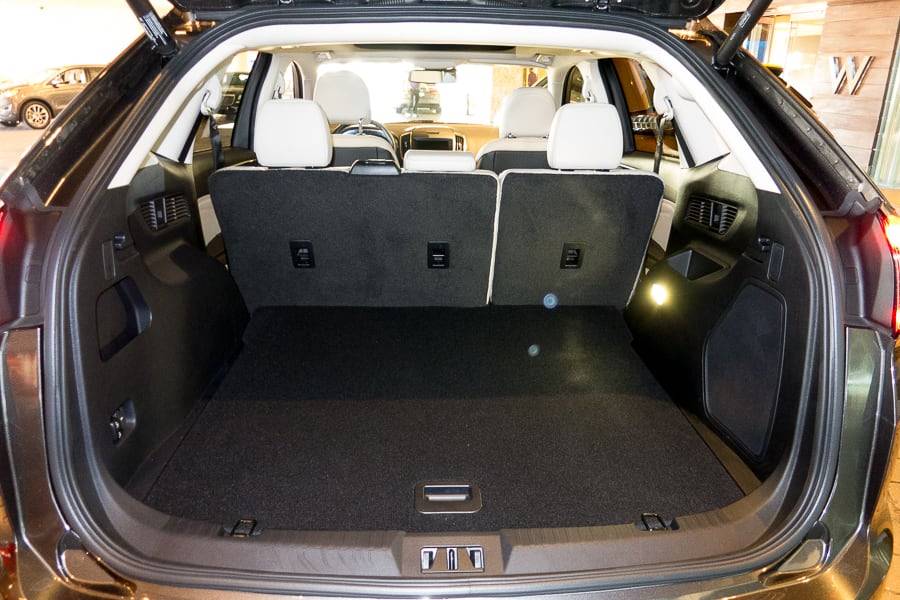 1/9
The 2015 Ford Edge is an evolution of the current model, mixed in with the latest Ford global styling, and it works quite well. | Cars.com photo by Aaron D. Bragman

The 2015 Ford Edge gains style, speed and interior space along with some impressive levels of technology, but loading it up with features can make it an expensive proposition.

The Edge has been one of the most popular models in the midsize SUV class since its introduction in 2006. Ford took a clean-sheet approach for the new 2015 Edge, keeping the bits that were popular with Edge owners and updating the rest with new style, new technology and new powertrains. The result is one of the most competitive and compelling new models to enter the hotly contested five-seat SUV segment in quite some time. More than just an update, the new model is a full-on upgrade, a much nicer vehicle than the old truck it replaces, which didn’t do so well in our last big two-row SUV comparison test (compare the 2014 and 2015 Ford Edge here). With many competitors redesigning their offerings, like the Nissan Murano and Kia Sorento, will the upgrades to the Edge be enough?

Where the original Edge was a bit monolithic and frumpy, the new Edge is sleek and looks fast. Cues from the rest of the modern Ford lineup are evident in the grille’s shape, the character line running down the body, and the taillights that look like they could’ve been lifted from the latest Ford Fusion. This is not a bad thing. The new Edge is a much more distinctive, attractive vehicle than the one it replaces, and it retains enough cues from the old model (such as the headlights connecting directly to the grille) that it’s not likely to be confused for a Hyundai Santa Fe Sport or the wildly styled new Murano. A choice of 18-, 20- or 21-inch wheels is available depending on model and trim, but gone are the big 22s due to noise, weight and warranty issues. They’re not likely to be missed, however, as the 21-inch alloy wheels and tires fill the wheel wells without any problem. The Sport model gets slightly different styling from the SE, SEL and Titanium trims, with a body-colored lower bumper and side sills, and blacked-out trim instead of chrome. Overall, Ford stylists did a fantastic job with the new Edge, creating a modern, updated shape that is likely to please returning customers and attract new ones.

Three engines are available in the 2015 Edge, but the way Ford is employing them differs from the outgoing model. Standard in the SE, SEL and Titanium models is a turbocharged 2.0-liter EcoBoost four-cylinder making a healthy 245 horsepower and 275 pounds-feet of torque. It is available with front- or optional all-wheel drive and, unlike the previous turbocharged Edge, carries a 3,500-pound towing capacity rating. Available as an option on these three trim levels, also in FWD or AWD, is a carryover 3.5-liter V-6 making 280 hp but just 250 pounds-feet of torque – that’s right, the base turbo four-cylinder makes more torque than the optional V-6 and gets better fuel economy while doing it. Most of my drive of the new Edge was in the turbocharged 2.0-liter Ford Edge Titanium all-wheel-drive model on the dry and mostly smooth roads surrounding Scottsdale, Ariz., which was perfect country for testing the new engine, less so for seeing how the AWD works.

The new 2.0-liter engine is impressive, with low-end punch that gets the big SUV moving through traffic with ease. Slip the six-speed automatic transmission into Sport mode and lower gears are selected automatically and held longer during acceleration, providing an even more sprightly feel to the truck. Highway passing power is adequate, but the turbo four seems to run out of steam the higher you go in the rpm band, a condition the big V-6 likely wouldn’t face. The base engine is much more powerful than the non-turbocharged four-cylinders in the Sorento or Santa Fe Sport, but it’s outgunned by the standard V-6 engines in the Jeep Grand Cherokee and Murano.

Given that the new 2015 Ford Edge is a clean-sheet design, Ford took the opportunity to change how the truck rides and handles with new electrically assisted power steering, a new front and rear suspension design, and new shock absorbers and springs. All of it adds up to a far more civilized, better-handling, solid-feeling SUV. The Edge tracks straight and true through tight corners and long sweepers, without any need for mid-corner adjustments. The ride quality is outstanding, even over broken pavement, with very little disturbing the cabin occupants. The brakes are a little touchy, with an initial grab that doesn’t feel in tune with the amount of pressure put on the pedal, but they stop the Edge just fine.

If you like something with just a little more character than the average five-occupant family hauler, Ford is offering the Edge in the Sport trim once more. And like before, it gets a unique engine. This time, it’s the twin-turbocharged 2.7-liter V-6 that first appeared in the Ford F-150, making a robust 315 hp and 350 pounds-feet of torque. It’s available only in the Sport trim and can be had with front- or all-wheel drive. The Sport also receives updated suspension hardware, including thicker anti-roll bars, different struts and stiffer springs. The V-6 sounds fantastic under full throttle, with a discordant roar that sounds like an older Volvo inline-five-cylinder engine. It provides a more seamless rush of thrust than the turbo 2.0-liter’s punchy delivery, and it doesn’t seem as quick as it should be, but that’s only because the Edge is so well sealed and refined that the speed creeps up on you with a surprising lack of drama. The Sport model’s ride and handling characteristics definitely swing to the sportier side of the spectrum, but it is by no means unpleasant, with a firmer ride that lets the car communicate more of the road’s conditions to the driver’s seat and more sensitive steering that responds faster to inputs. It’s a much more enjoyable model than the outgoing Sport trim, and with the more tasteful exterior touches, it is the trim level I’d pick.

The 2015 upgrades are most evident in the interior, which receives a complete makeover to more closely resemble its bigger brother, the Explorer. Material quality is considerably improved, and gone is the touch-sensitive center control panel that gave everyone (including Ford, through its tumbling initial quality scores) absolute fits. In its place is a stack that includes a minimum of dedicated buttons, arranged in an easy-to-find pattern and backed up by secondary controls through the large touch-screen.

The interior is larger than the outgoing model, featuring an inch more backseat legroom than the 2014. In fact, it also boasts more legroom than the Murano or Grand Cherokee, both of which are reasonably spacious to begin with. But all is not well up front, which has seats that feature bizarrely short bottom cushions like so many current Ford products. “Edge” is an appropriate name for this truck, as you feel like you’re sitting on exactly that. Of all the Ford products on sale today, only the Flex and Mustang have seats of suitable lower cushion length; the upcoming Lincoln MKX does as well. The rear seats have plenty of room and are perfectly comfortable, and now they’re available heated as well.

The 2015 Edge does not feature the new Sync3 system that we saw late last year; it makes do with the current-generation Sync, with all of that system’s pros and cons. It works as well as it always has, which is to say imperfectly. The screen is cluttered and busy; connecting a smartphone is relatively simple, but the time needed to index a device’s files and build voice commands remains interminably long. Far too many menus are required to get to simple tasks like finding a playlist or changing the sound balance. This is all going to change with the new Sync3 system, but we’ll have to wait for that one to appear.

The gauges in front of the driver are familiar, as they look identical to those found in most other Ford products from the Explorer to the Fusion. They’re clear and easy to read, with auxiliary menus controlled by the two five-way switches on the steering wheel. But the highlight has to be the return to mechanical buttons in the center console instead of touch-sensitive panels, a move for which we couldn’t be happier.

The new 2015 Edge has not yet been crash-tested.

All Edge models include a standard backup camera, first- and second-row side curtain airbags and a passenger knee airbag that deploys from the glove box. With the upgrade to an all-new chassis came the ability to dramatically increase the electronic safety content for the new Edge, and Ford has loaded it with every conceivable system available. Most of it is optional, of course, in extra-cost packages that are tied to specific trim levels. Option up the highest trim level with all of the available equipment and the list is long: lane departure warning; lane keep assist; adaptive cruise control with full stop and forward collision warning (with braking support); a 180-degree front-mounted camera with integrated washer; forward, side and reverse sensing systems; inflatable rear seat belt airbags; parallel and perpendicular park assist with park-out feature; and more. Have a look here to see what comes standard on the new Edge.

The latest Edge base price starts at a reasonable $28,995, or about where a midpriced but smaller Ford Escape sits. That entry price gets you a front-wheel-drive SE with the turbocharged 2.0-liter engine, and all-wheel drive is a $1,995 option across the board regardless of trim level. The Ford Edge SEL adds features such as automatic climate control and starts at $32,395, while the top-line Titanium starts at $36,495. The Sport trim level isn’t that much more than the Titanium, but it has a different focus – sportiness, to the Titanium’s luxury. It starts at $38,995; option a Titanium or Sport trim level out as far as it will go and you’re looking at more than $50,000 for a fully loaded Edge. All prices include destination fees.

Competitors are numerous, but most are three-row SUVs these days. The number of two-row midsize SUVs is not as big as it used to be. The Jeep Grand Cherokee is one, having won our last midsize comparison challenge, but it’s a different animal. Rear-wheel drive and off-road ready, it features V-6, V-8 and turbo-diesel engines, but it is priced similarly to the Edge. The Hyundai Santa Fe Sport is the five-seat version of Hyundai’s car-based SUV, with the seven-seat version labeled just Santa Fe. It’s a perennial favorite of ours, with its outstanding handling, lighter body, top-notch content and excellent value. The Santa Fe Sport doesn’t have the engine options that the Edge does, however, nor does it have some of the technology or sport equipment items that make the Edge appealing. Finally, the Nissan Murano has gone upscale from where it used to be; the latest restyle has made it a standout for content, appearance and equipment, with a price tag to match. In a contest of what’s more fashionable, the Murano might give the Edge a real run for the money. Compare the Edge with its latest competitors here.