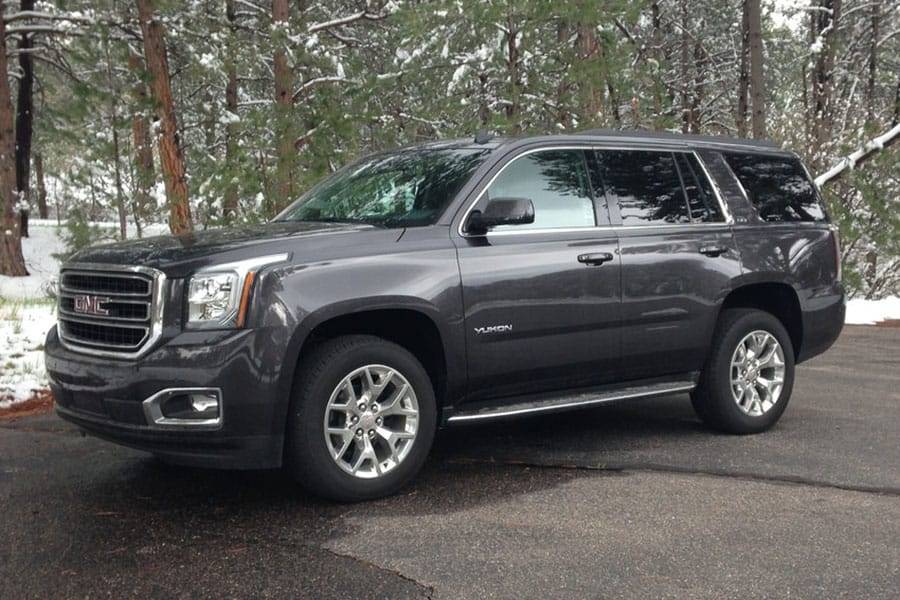 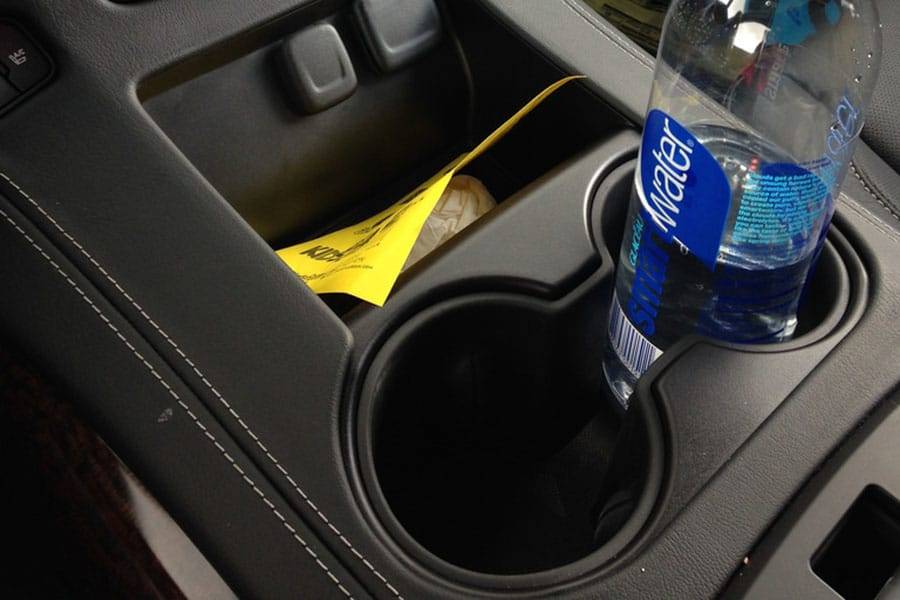 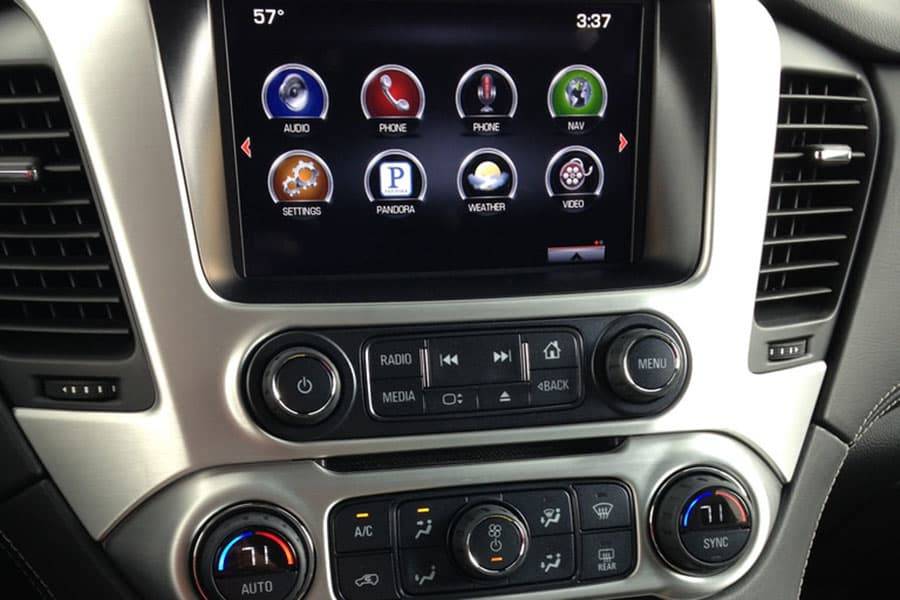 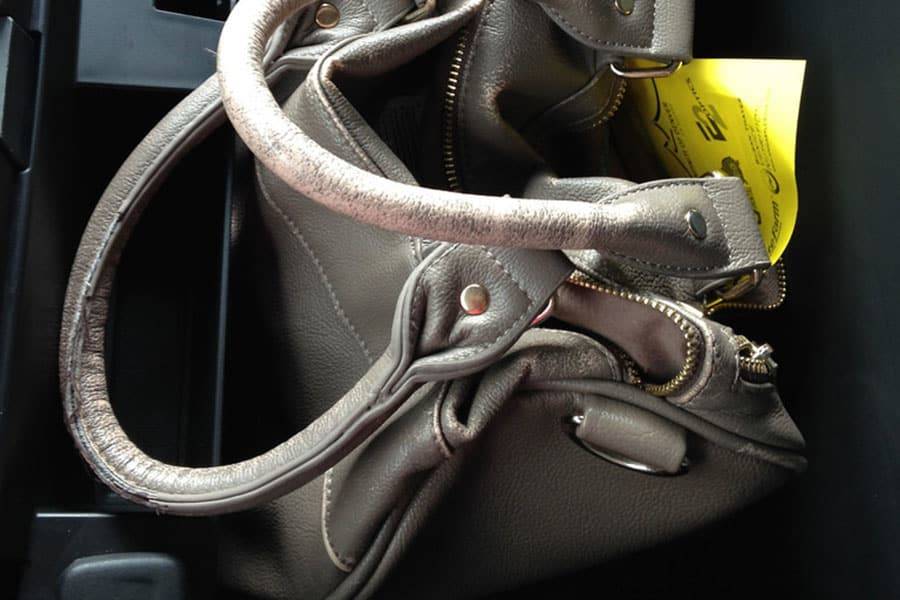 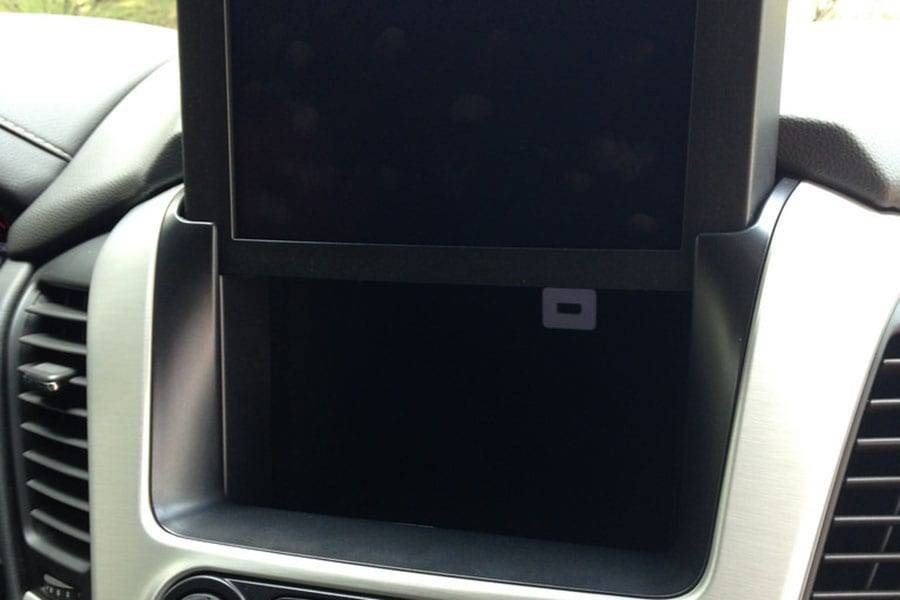 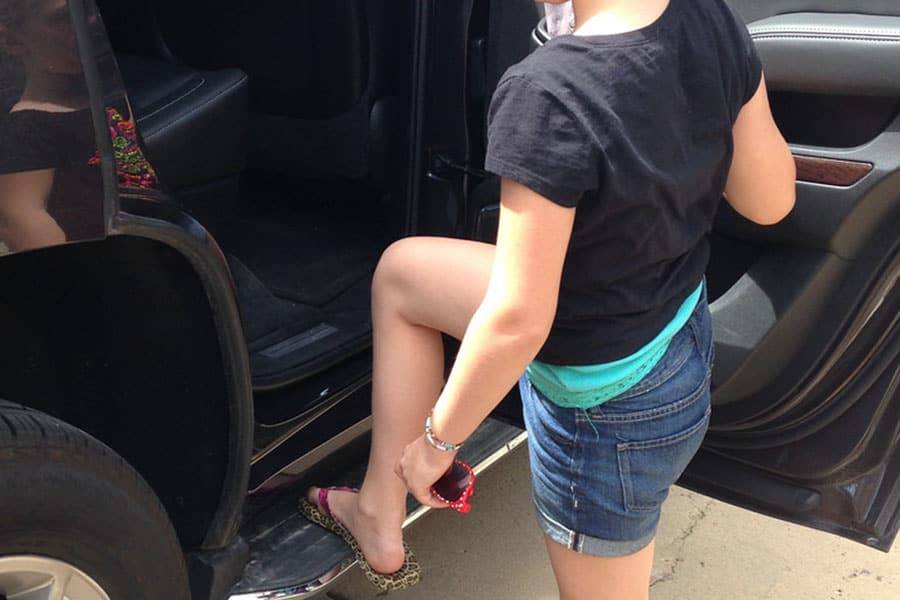 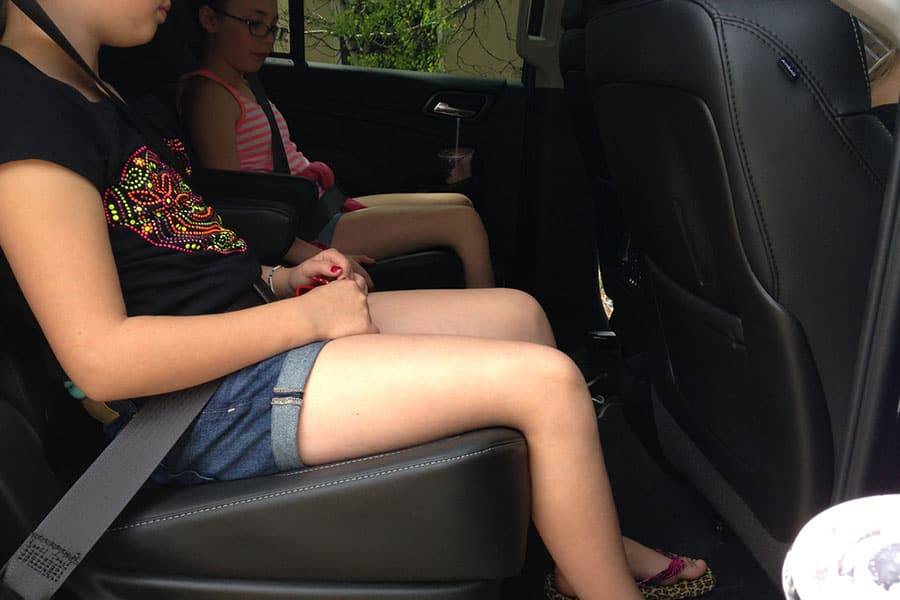 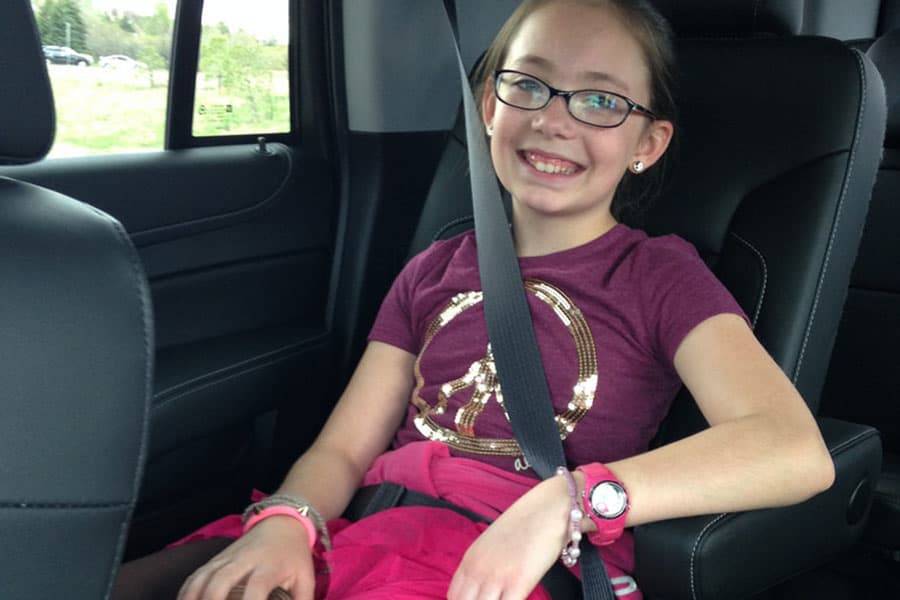 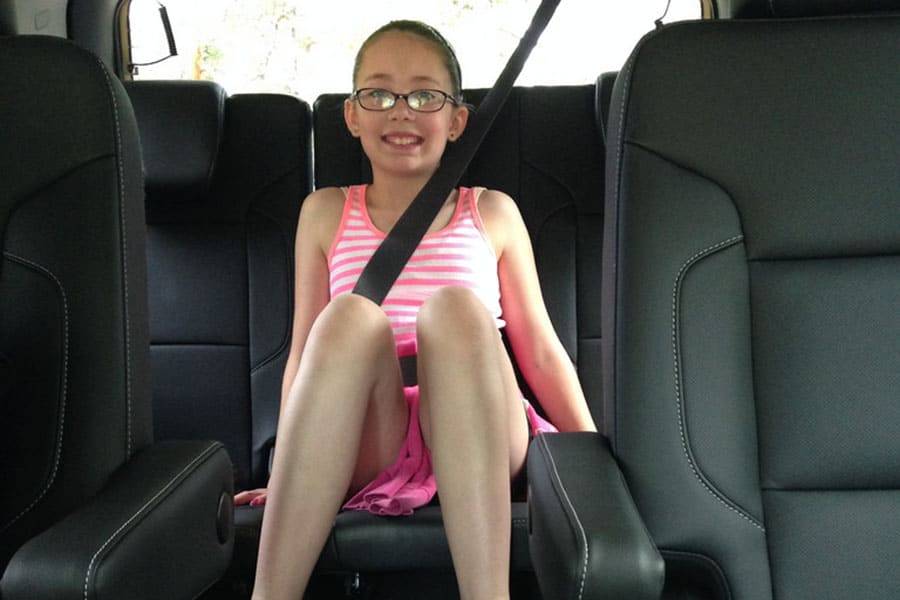 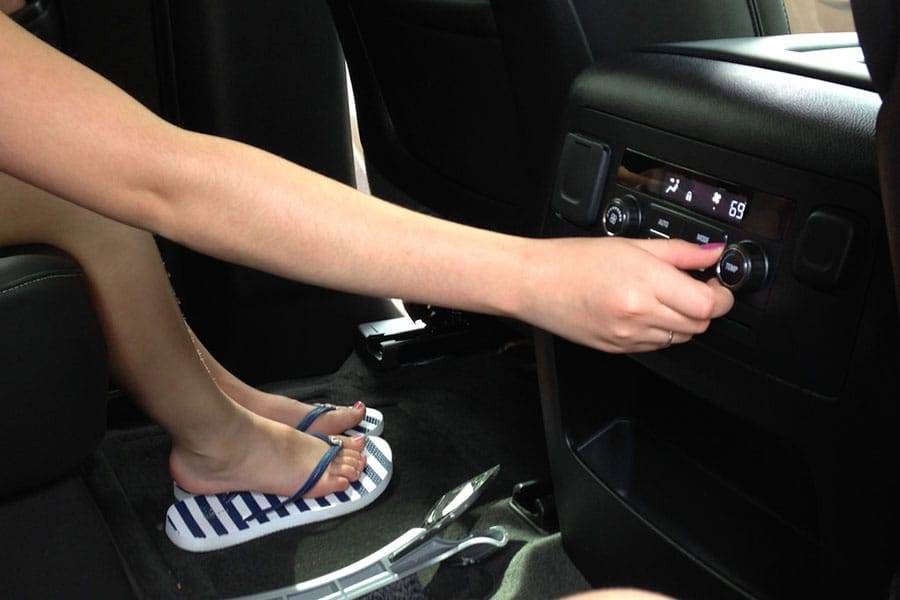 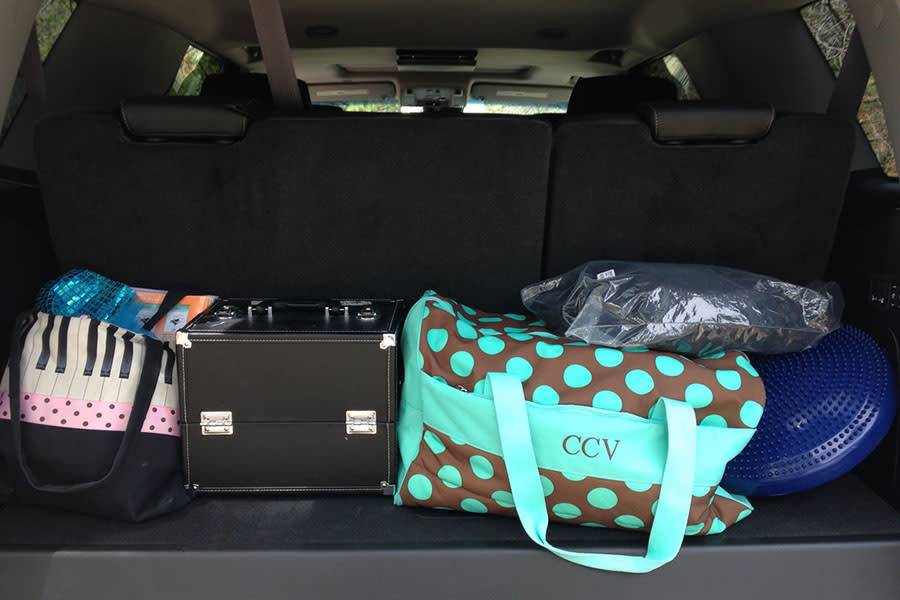 The 2015 GMC Yukon is a massive full-size SUV for those who need hauling capability and like a feeling of spaciousness on the inside. However, if you don’t enjoy a body-on-frame trucklike ride, this probably isn’t the SUV for you.

I grew up in the back of my dad’s Chevrolet Suburban, riding up to the mountains in the winter and out to the lake in the summer — in my Miss Piggy sleeping bag, perched precariously atop the dog kennels in the cargo area. (Seat belts? What seat belts?) Driving the 2015 Yukon certainly offered me a feeling of nostalgia, though with a much more modern, upscale interior.

Like its sister the Chevrolet Tahoe, the GMC Yukon underwent a thorough overhaul for 2015, including some features that busy families will appreciate: a sleeker exterior; an available programmable-height power liftgate; fold-flat second- and third-row seats (with an available power-folding feature); a 110-volt, three-pronged outlet to charge anything you can think of; available keyless entry with push-button start; a conversation mirror to keep an eye on youngsters in the back; a new family of engines that improve gas mileage by nearly 10 percent; and a whole slew of new safety features (see Safety section below). Compare the 2015 and 2014 versions here.

The GMC Yukon is available in either rear- or four-wheel-drive versions of SLE, SLT and Denali trim styles. Compare the four-wheel-drive versions side by side here. The Yukon also comes in an extended version, the Yukon XL, which is akin to the Chevrolet Suburban (itself an extended Tahoe). Both the GMC Yukon Denali and GMC Yukon XL Denali come with an eight-speed automatic. See the regular Yukon and Yukon XL compared side by side here.

If the full-size GMC Yukon isn’t your cup of tea, you may also want to take the time to research the Ford Expedition, Nissan Armada or Toyota Sequoia. See them side by side here.

Exterior & Styling
The Yukon comes with some nice, modern updates this year. Its slightly squared-off back end, the blingy 20-inch polished aluminum wheels on my SLT test car and a standard rear spoiler give the Yukon a boy-racer-meets-“Man Vs. Wild” look that’s equally at home traversing mountain streams and tackling the rigors of daily carpooling.

With a step-in height of 22 inches, assist steps on the outside of the Yukon are standard and an absolute must for climbing in and out of this tall beast (illuminated power retractable ones are available on the Yukon Denali version). Of course, once you step up onto the running board you’ll need to watch your head under the roofline. It’s not an elegant process for someone of my 5-foot 3-inch stature. My two younger daughters (ages 9 and 11) were short enough to not worry about hitting their heads when using the assist step to climb up and into the SUV.

How It Drives
To me, the GMC Yukon felt very much its full-size SUV self on the road. With such an upscale look and feel to the interior, I guess I was expecting some type of magic to make the Yukon drive more like a car, but that didn’t happen. The rear wheels are almost 2 inches farther apart this year in an attempt to improve cornering performance. However, there was still too much body roll for my comfort, not only in corners but also with just slight steering adjustments. My middle daughter said she liked how it felt soft and comfortable when going straight, but that she felt like she was going to tip over every time we turned. “It feels like riding in a giant wobbly box,” she said. This sensation seems to be more noticeable for passengers than for the driver.

The Yukon comes with an electric variable assist power steering system that felt quite odd to me. You have to start out muscling the weight of this car into a corner, and then you feel the assist take over and lighten the load. It’s difficult to anticipate and makes it hard to maintain consistent steering feel.

Braking feels as if you’re trying to get a 5,500-pound (plus the weight of my family) beast to come to a stop, despite brake-pedal revisions that were supposed to provide “stronger-feeling, more confident braking performance.” I may have taken a few rolling stops at the beginning of my week in the Yukon before really getting a feel for the distance and force needed to come to a complete stop.

One area in which I was pleasantly surprised was the Yukon’s maneuverability and better-than-expected 39-foot turning circle. In comparison, the Ford Expedition’s and Nissan Armada’s turning circles are 40.8 feet. The Toyota Sequoia beats the crowd with a turning circle of 38.1 feet.

The four-wheel-drive Yukon’s standard 5.3-liter V-8 engine with active fuel management operates in four-cylinder mode whenever possible to improve fuel economy. It gets an EPA-estimated 16/22/18 mpg city/highway/combined. The two-wheel-drive Yukon with the 5.3-liter engine gets a slight mileage bump, up to a 23 mpg highway rating. Upgrading to a beefier, 6.2-liter engine takes the combined gas mileage down to 16 and 17 mpg for the four-wheel drive and two-wheel drive, respectively — a nearly 10 percent improvement over the 2014 Yukon.

Interior
The Yukon’s interior is plush and comfortable, feeling like a living room on wheels.

As silly as it may seem, my favorite feature had to be the massive center console that easily swallowed my purse and/or laptop and iPad. Hey, it’s the little things in life that count, right? With a teenage daughter who recently “graduated” to riding in the front seat, I’m feeling increasingly claustrophobic in my test cars, with no place for my stuff. If I stash my purse on the floor in the front, she steps on it. When I put in on the floor in the back, my two younger daughters step on it, spilling the contents into the dark, scary recesses of under-seat hell. In the Yukon, everyone has elbow room to spare, along with plenty of storage to keep their (and my) things tidy and organized.

I also had access to a large, super-secret storage area behind the center touch-screen as well as in-door storage in the front and rear doors. The cupholders in the rear-door armrests were a hit with the kiddos.

My test vehicle came equipped with second-row captain’s chairs with a huge aisle between them, making the third row easily accessible. I was surprised, however, to see that the seat belts for the captain’s chairs were not height-adjustable. My two younger daughters fit properly in the captain’s chairs with their feet flat on the floor, knees bent over the front edge of the seat and backs up against the backrests, but the seat belts cut quite high on their necks, making me ultimately opt to put them in boosters (much to their dismay). Having such a high seat belt seems inconsistent with the average size of kids, who are likely passengers.

The third row was totally uncomfortable, even for my kids during short trips. The Yukon’s stadiumlike seating configuration means the third row is raised up a bit on a platform, so even kids’ knees are practically up at chin level. The center seat belt in the third row extends from the roofline, cutting way too high on the neck for comfort or proper fit.

The available heated and cooled front seats are a great touch, but the seats’ cooling fan is a bit loud, made more noticeable by how quiet the Yukon’s interior otherwise is. Aerodynamic changes for 2015, along with a laminated windshield and front side windows, cut down quite a bit on ambient noise in the SUV. For shoppers seeking even more peace and quiet, the GMC Yukon Denali version has active noise-canceling technology inside.

Ergonomics & Electronics
The Yukon’s Bluetooth phone and audio system pairs and reconnects seamlessly. The touch-screen panel feels like it should be angled slightly toward the driver for easier access and visibility — though when riding in the passenger seat I appreciated that it was centrally directed so I could operate it as well.

The air controls were all easy to operate at a quick glance while keeping my eyes on the road — no navigating through multiple menu screens just to turn the fan up, as some modern vehicles require. There are separate controls up front for both front and rear air.

A three-pronged household 120-volt outlet was a nice addition up front.

The available rear-seat entertainment system ended our love affair with the electronic simplicity we’d found up front. My 11-year-old daughter was super excited to test it out on a longer than usual evening drive, but she couldn’t get a movie to play on her own in the back and I couldn’t help from the front. She bitterly wanted me to note that she thinks GMC tried to make it look fun and easy to use — with a remote with large buttons that looks like a video game remote — but that it’s not easy to use at all. Additionally, the entertainment screen folds down from the roofline, completely blocking my view in the rearview mirror.

Cargo & Storage
Cargo space behind the third row is surprisingly small, at just 15.3 cubic feet. This can expand up to 94.7 cubic feet with both the second and third rows folded, but for such a large vehicle I was really expecting more cargo space along with full seating capacity. Even a Mini Countryman beats that number, with 16.5 cubic feet of cargo space with its seats up. This is where the XL version of the Yukon pays off, providing 38.9 cubic feet behind the third row and a total of 121.1 cubic feet — while also increasing third-row legroom from 24.8 to 34.5 inches.

Sticking with the shorter models, the Expedition, Sequoia, and Armada have 18.6, 18.9 and 20.0 cubic feet of volume behind their third rows, respectively.

GMC has added some pretty interesting new safety features this year, including a standard front center airbag that protects the driver and front passenger from one another in the event of a side crash or rollover. A backup camera is also standard. Forward collision alert, blind spot warning, lane departure warning and rear cross-traffic alert are available, along with an optional safety alert seat that lets the driver know of potential dangers via a slight vibration to the driver’s seat on the side from which the danger is pending. It’s a great feature, as a simple tone alert can easily be drowned out by typical family noise inside a car.

Value in Its Class
Ringing in at more than $64,000, my as-tested car hardly seemed like a bargain. For the amount of actual usable space it offers, I’d probably direct my search toward the new Dodge Durango, which would come in well under this price (to the tune of about 20 grand), even fully loaded. However, the four-wheel drive Yukon has a long history of brand loyalty passed from one family member to the next, along with the ability to tow up to 8,500 pounds. This gives it a leg up with active families hauling boats or campers on the weekends.