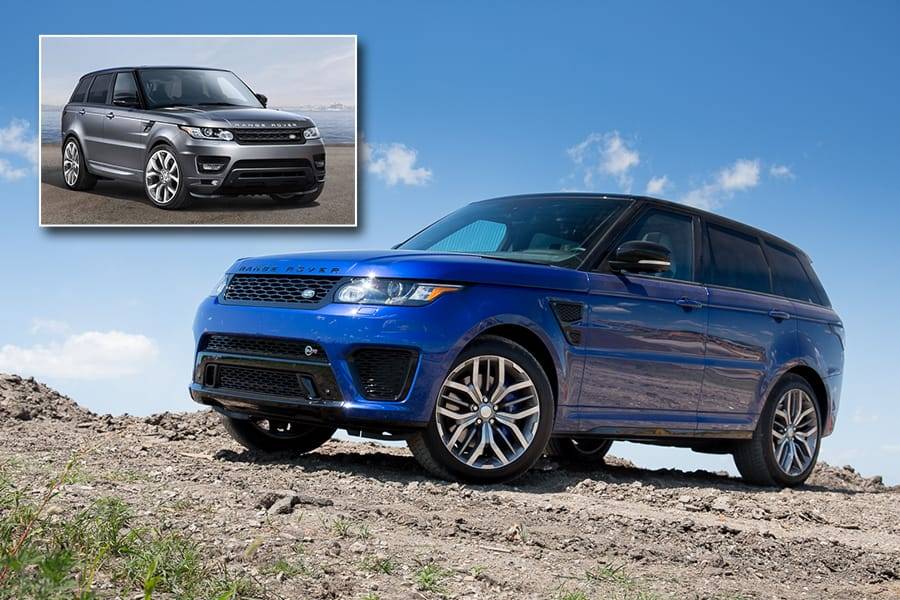 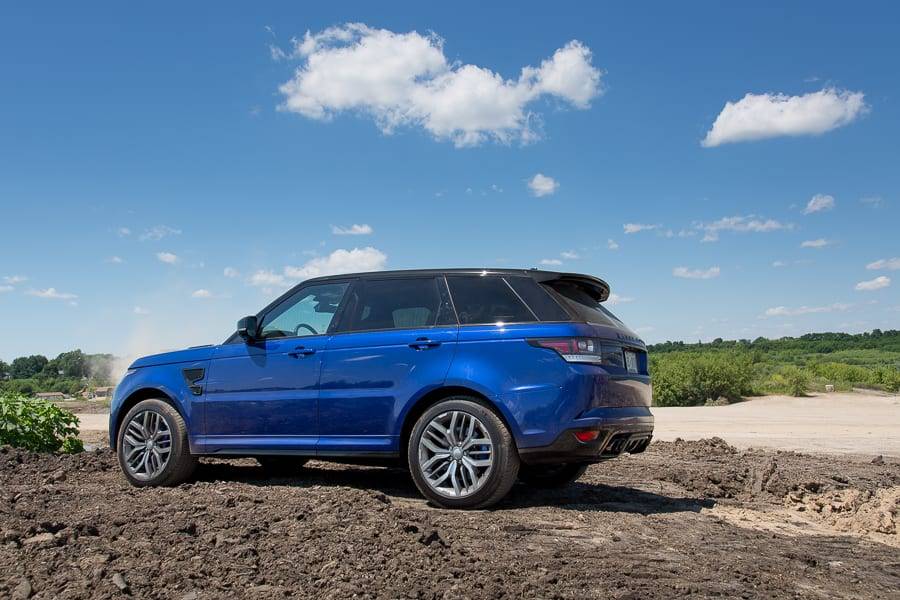 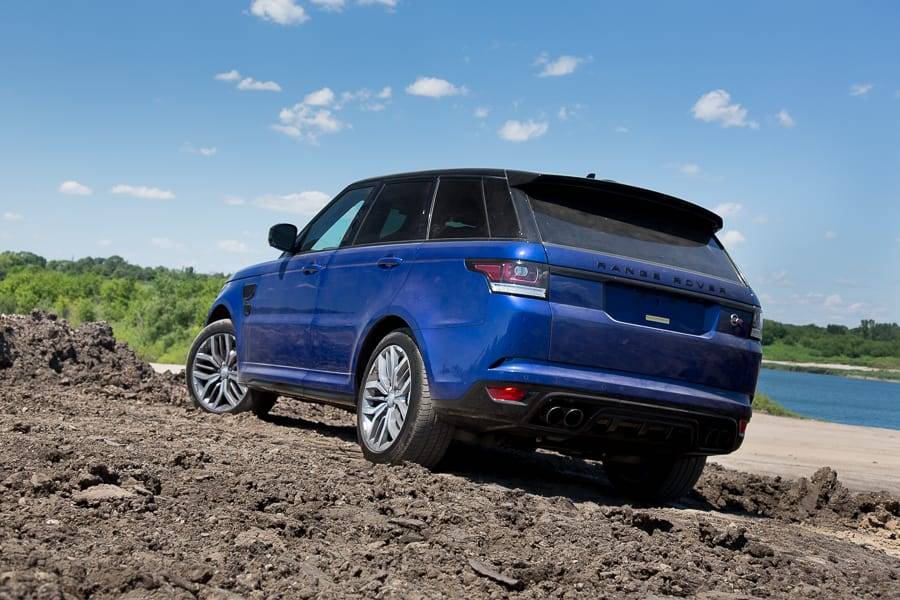 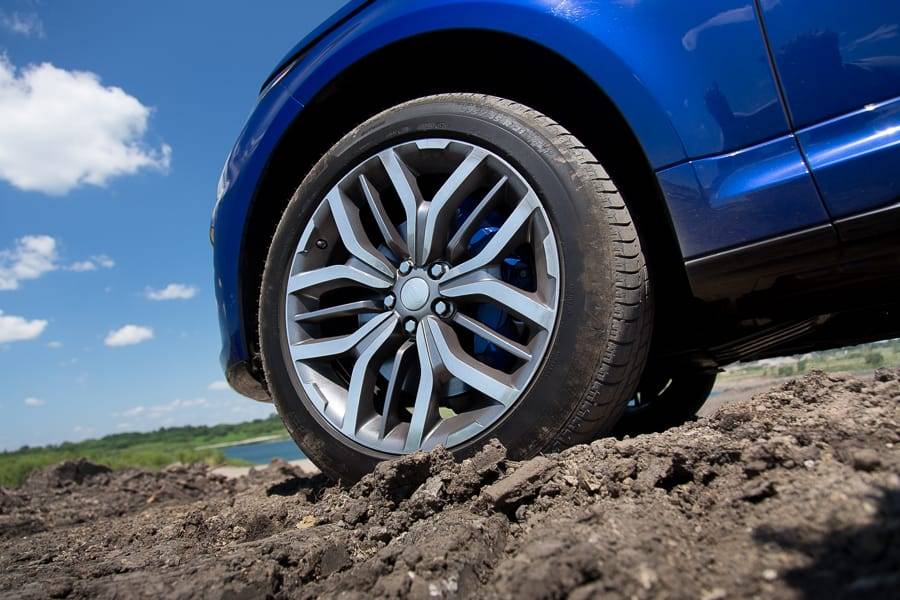 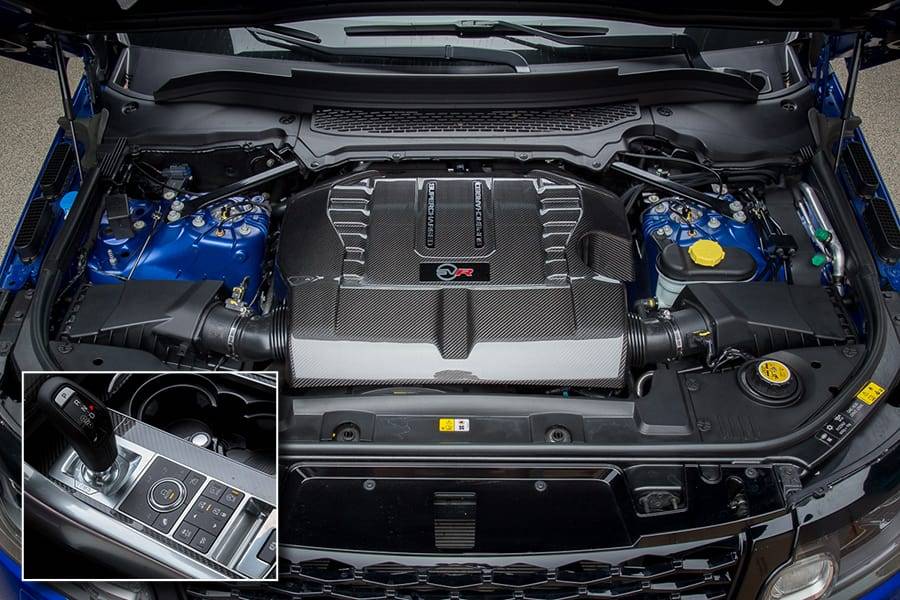 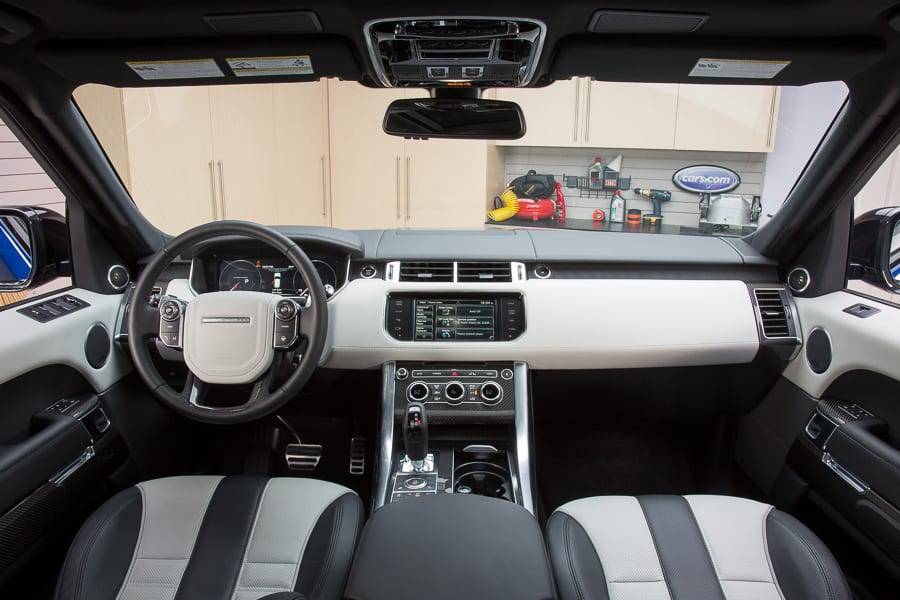 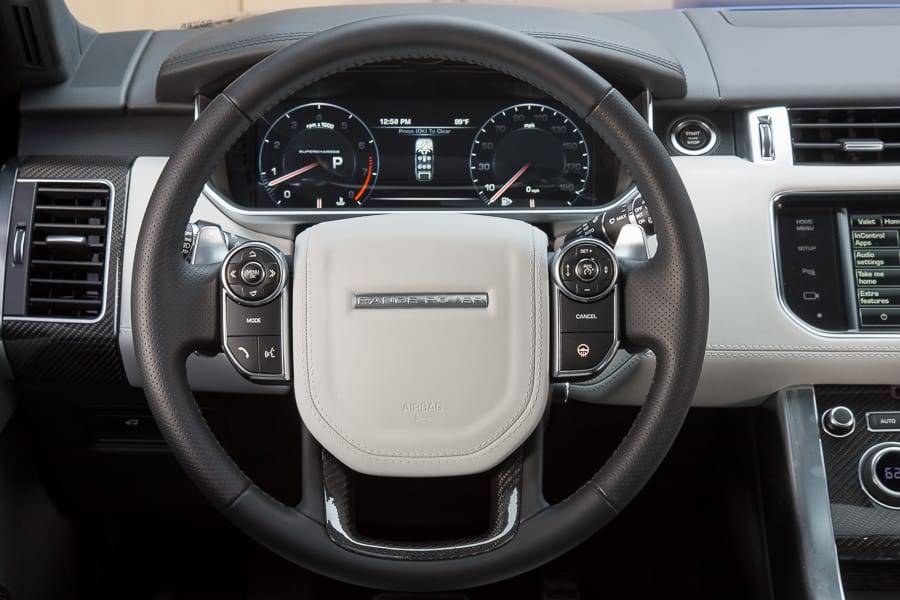 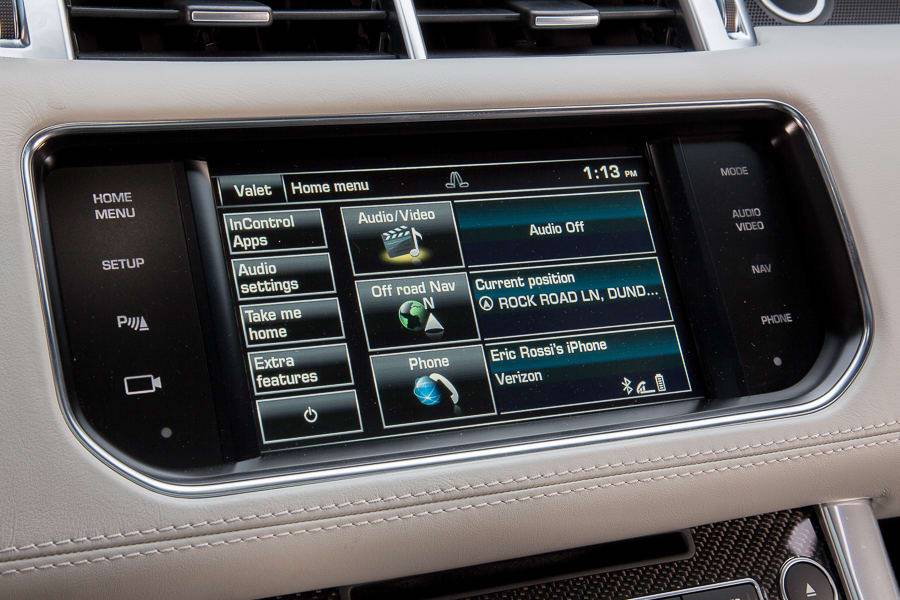 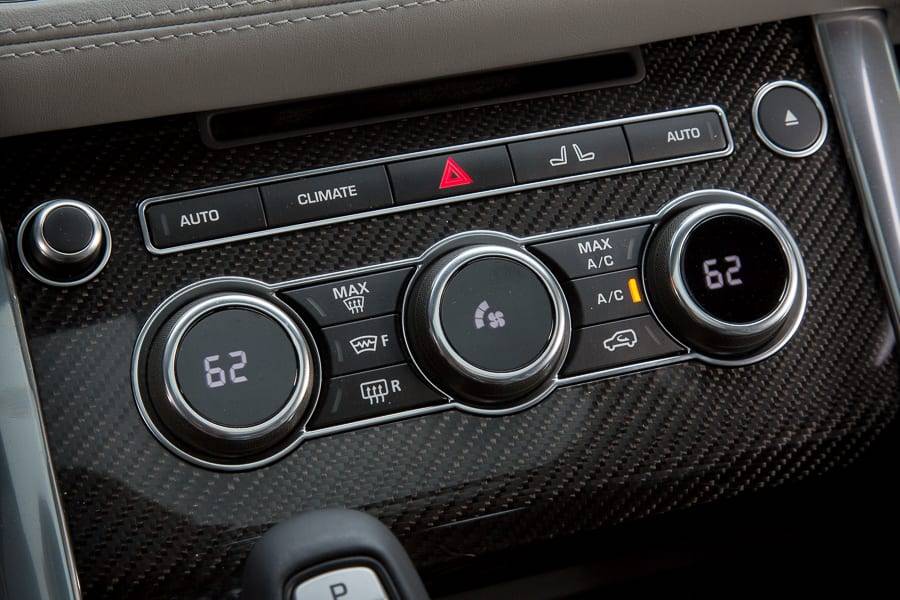 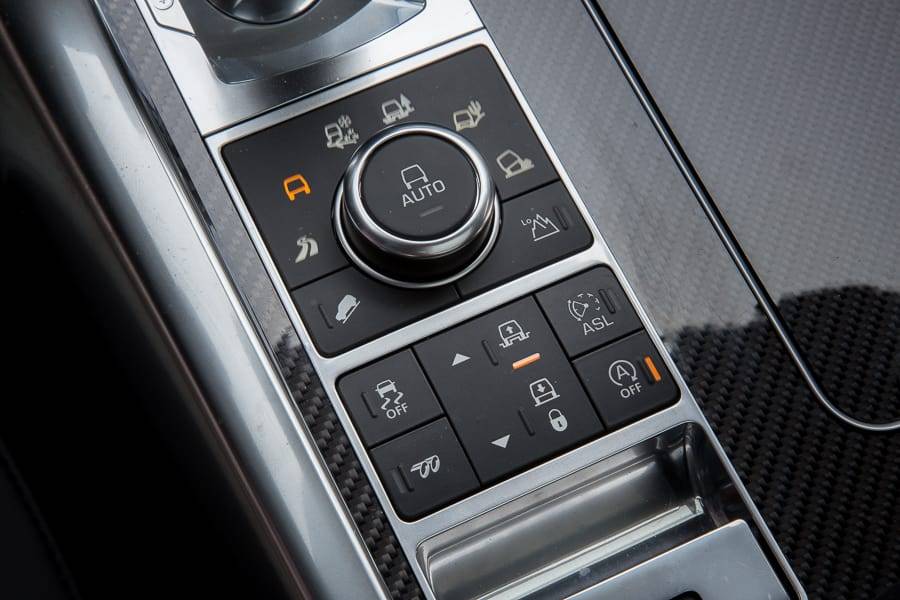 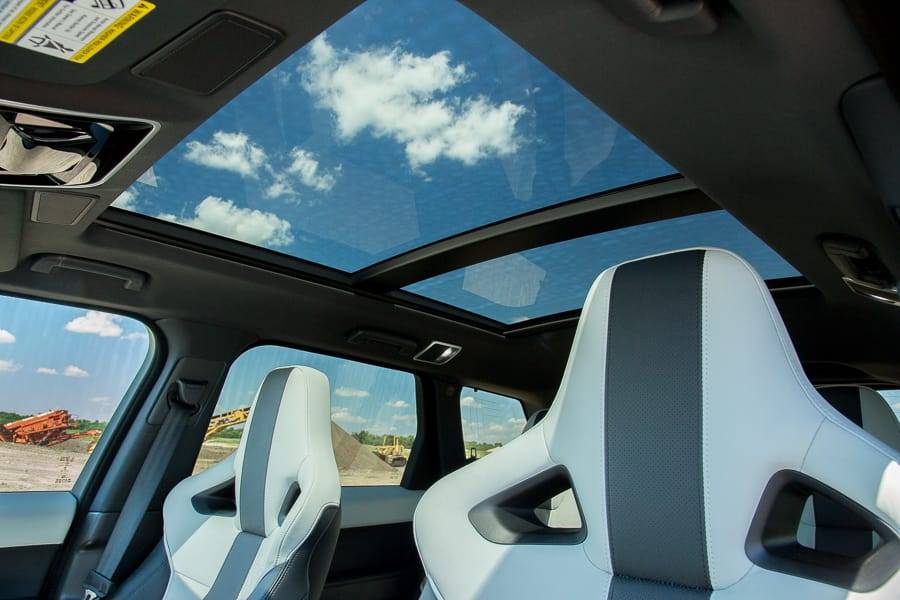 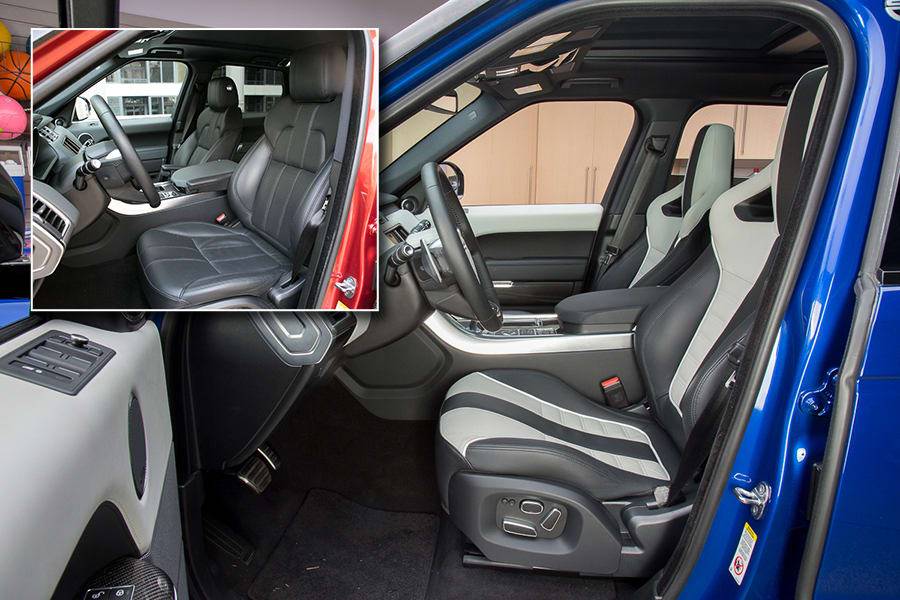 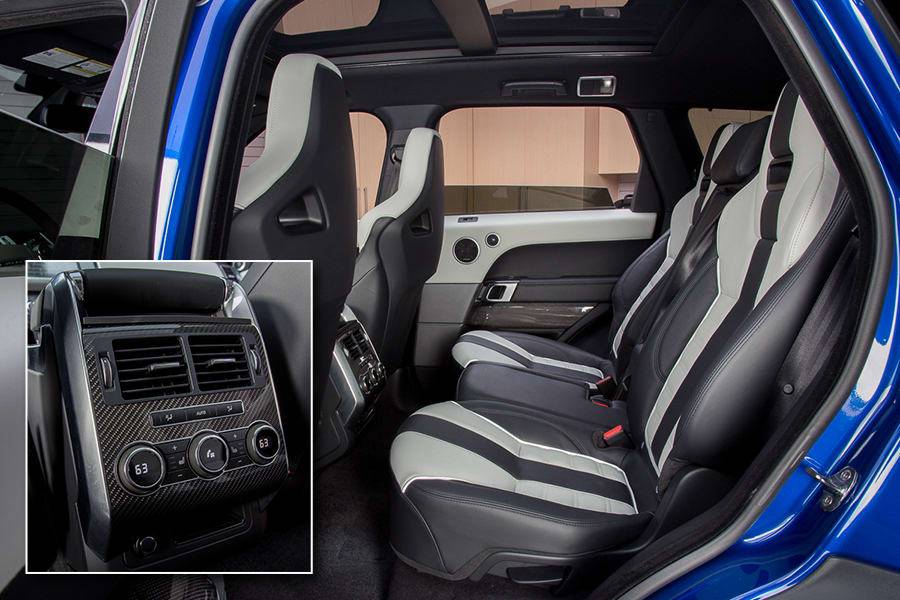 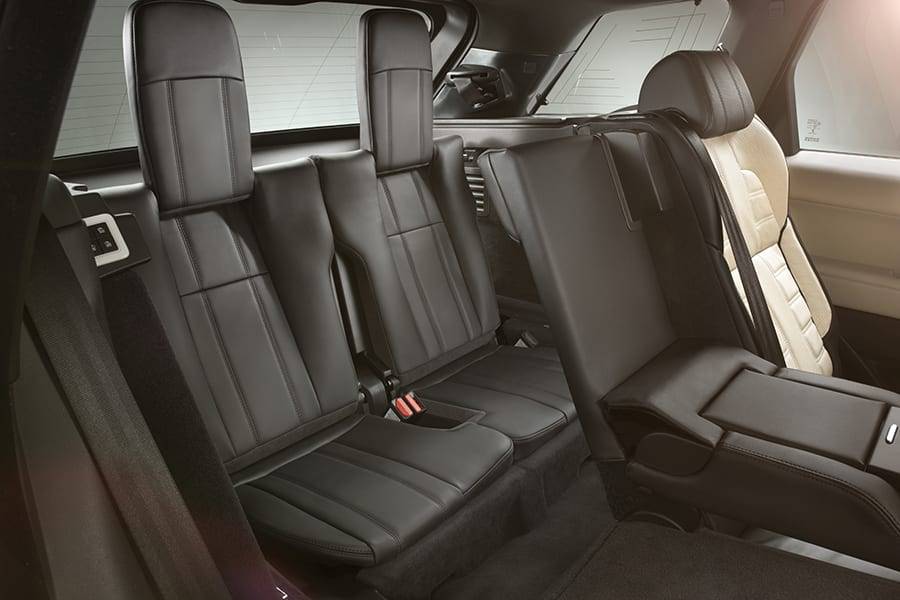 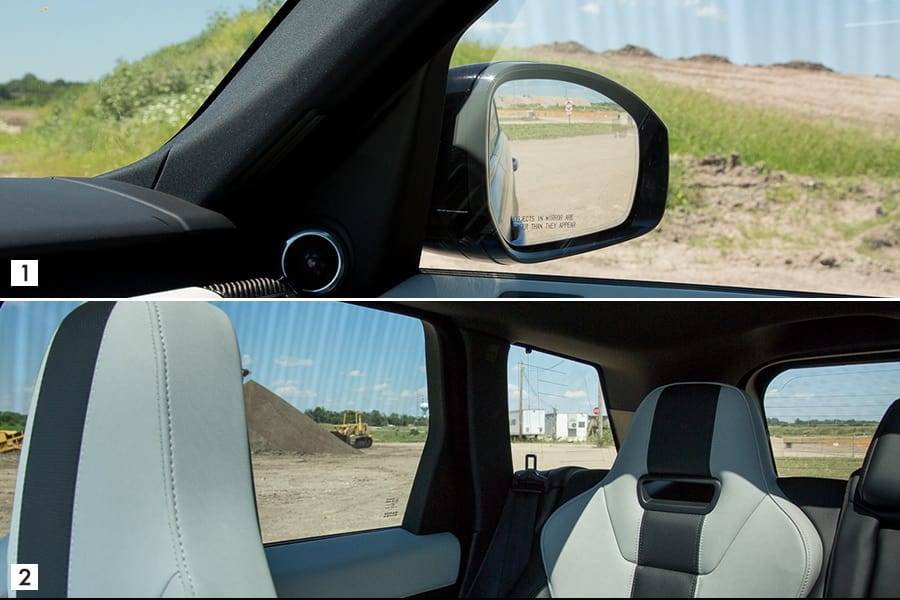 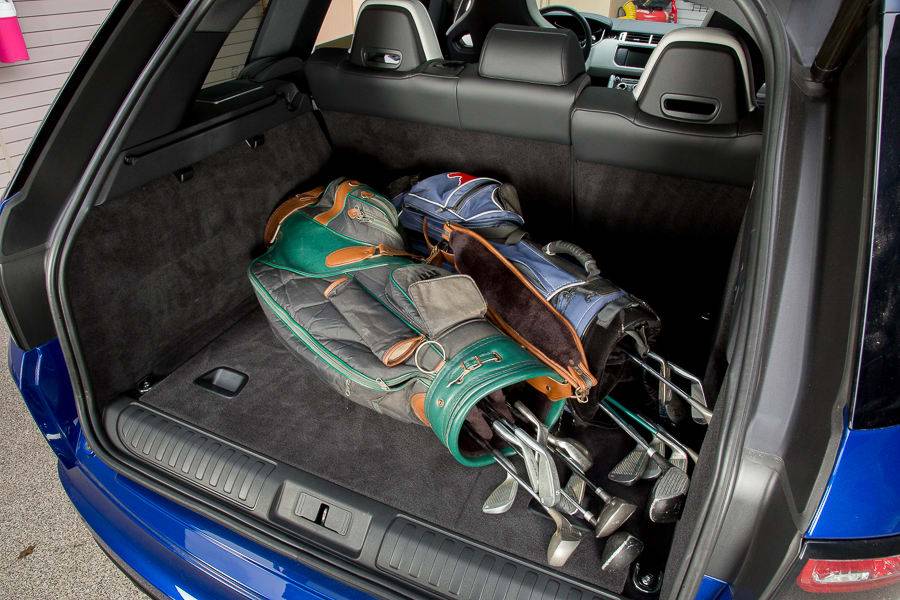 The new SVR version of the 2015 Land Rover Range Rover Sport returns the performance that took a backseat to luxury in the SUV’s 2014 redesign, but it’s got some drivability problems.

The product of Jaguar Land Rover’s Special Vehicle Operations group, the seriously expensive, 550-horsepower SVR sits atop a lineup that includes two other drivetrains and four other trim levels. Compare them here, and compare the 2015 and 2014 Range Rover Sports here. I’ll focus this review on the SVR. For a broader take on the Range Rover Sport, read our 2014 review here. Note that the Range Rover (minus the “Sport”), Land Rover’s flagship, is a separate model, detailed here.

The new face is mostly functional; the taller front openings direct more air to the brakes and twin intercoolers. The face also compromises little capability. Approach and departure angles diminish a bit, but ground clearance remains the same, with a trail-ready 10.9 inches of maximum clearance in the standard air suspension’s highest, off-road mode.

How It Drives
The SVR’s supercharged V-8 goes well beyond what any SUV ought to be able to do, with endless power from 2,000 rpm upward along with popping, hissing exhaust in the drivetrain’s Dynamic mode.

If only it weren’t such a drag getting the SUV to start moving out. Despite Land Rover’s claims of faster shift times for the SVR, the standard eight-speed automatic occasionally hunts on multigear kickdowns and delays or even flat-out refuses to downshift. Toe the pedal hard and the drivetrain reacts eventually, and often violently, but waking the beast takes a moment.

The supercharged V-8’s prodigious torque (502 pounds-feet from 2,500 to 5,000 rpm) is enough to tack on speed even during the transmission’s stubborn moments. Two sportier driving modes — an all-encompassing Dynamic mode and a separate Sport mode for the transmission alone — also hasten the response. But drivetrains should respond well by default. I call foul.

Clear your way through the lag and the SVR pulls hard, crossing 60 mph in a scant 4.5 seconds, according to Land Rover. That’s plenty quick, albeit short of rival performers. Porsche says the Cayenne Turbo S hits 60 mph in just 3.8 seconds, and Tesla says its forthcoming Model X will pass the mark in a supercar-spanking 3.2 seconds. Still, if you think the SVR is slow, you need to have your head checked.

The Range Rover Sport SVR’s handling chops signal the biggest departure from lesser Range Rover Sports. Fly into a corner and the SVR resists body roll like a sports car — and decidedly unlike lesser Range Rover Sports. The steering has a degree of SUV-like slop, and our test vehicle’s all-season Michelin tires surrendered grip to initial understeer. But put it in Dynamic mode, apply steady gas and you can drift the SVR’s tail with surprising control. Get the hang of it and sweeping turns enable easy four-wheel drifts with a gratifying mix of playfulness and poise.

Unfortunately, there’s some tradeoff in ride quality. The SUV is quiet and stable at highway speeds, but the suspension — an SVR-specific setup with active stabilizer bars and adaptive shocks — rides busily. Larger bumps reveal a degree of harshness that seems out of place in a luxury SUV, even a sporty one, and Dynamic mode dials up the choppiness on everything but glass-smooth pavement.

The Range Rover Sport also offers a 340-hp, supercharged V-6 or a 510-hp, supercharged V-8. A higher-mileage diesel V-6 is coming for 2016. Full-time four-wheel drive and an air suspension are standard, with adaptive shock absorbers optional on V-6 models and standard with the V-8. No matter the engine, maximum towing capacity tops out at a decent 7,716 pounds.

Interior
The SVR’s bolstered sport seats pin you in all the way up to your shoulders, which garnered mixed opinions. One editor hated them, saying they diminish visibility and have all the cushioning of a park bench. Others, including myself, found them supportive and comfortable. True to design, they pin you in during hard cornering.

Their one-piece design carries over to the outboard rear seats, whose fixed head restraints sacrifice some rear visibility. But sight lines are otherwise good, thanks to plenty of glass around you, tall side mirrors and narrow roof pillars.

Like other upper-crust Range Rover Sport trim levels, the SVR boasts upgraded cabin materials with real metal accents and a genuine-leather-wrapped dashboard. The cabin is wide enough that the massive center console won’t inhibit knee room for anyone but the largest drivers. The rear seats offer good legroom and headroom, plus a high seating position and excellent visibility, but adult passengers may find the lower cushions too short. The seats recline a tiny bit, but the SVR’s sculpted chairs are fixed. That departs from the other trims, whose backseats adjust forward and backward. An optional (and tiny) third row increases seating capacity to seven in the Range Rover Sport, but it isn’t available on the SVR.

Ergonomics & Electronics
The SVR’s electronics are a bit onerous. Optional 12.3-inch simulated gauges replace the physical gauges lesser trims have. They’re already starting to look a bit pixelated. Touch-sensitive controls flank the dashboard’s standard 8-inch touch-screen, and they take a concerted push to engage. When they finally do respond, the menu changes are … slow.

Bluetooth phone and audio streaming are standard. Optionally, Land Rover’s InControl Apps runs apps like Glympse, Stitcher, Rdio and others on the dash screen off a plugged-in compatible smartphone. Audio offerings culminate in an umpteen-speaker Meridian Signature Reference stereo that’s exclusive to the Autobiography and SVR.

Cargo & Storage
The cargo area has a high load height when the suspension is set to its normal level, but an Access Height mode drops it considerably — and also makes it much easier to get inside the SUV. The squared-off space in back amounts to a modest 27.7 cubic feet of cargo volume, however. That’s more than the Cayenne, but the rival Mercedes-Benz GLE-Class (formerly the M-Class) has nearly 40 percent more space.

The rear seats fold in a 60/40 split to create a maximum 62.2 cubic feet of volume, but the bulky lower cushions create a significant incline in the cargo floor. Land Rover says the optional third row power-folds into the floor without any loss in cargo room.

Up front is a spacious glove box and cooled center console, plus a semi-hidden shelf beneath the center controls. There are also three levels of door pockets, including one behind a trick armrest door.

Safety
The Range Rover Sport has not been crash-tested.

Lane departure and blind spot warning systems are optional, as are 360-degree cameras and a self-parking system for both parallel and perpendicular spots (the driver operates the pedals, but the vehicle handles the steering). Optional adaptive cruise control includes a forward collision warning system with automatic braking, which is active even when cruise control is off.

See a list of standard safety features here, and our Car Seat Check on the SVR here.

Value in Its Class
With the SVR, Land Rover addresses concerns that the Range Rover Sport had gone soft in its second-generation redesign. But it costs a pretty penny to get there. A loaded SVR runs more than $125,000, or about double the base Range Rover Sport SE. It’s opulent and capable, and some will choose it over the German alternatives simply for the Range Rover name. That’s an aura this Sport deserves more than its predecessor, given it shares a lot more components with Land Rover’s flagship SUV than it did before 2014. But the Range Rover Sport still has some issues, even in SVR form. Be sure to log a lengthy test-drive before you decide.