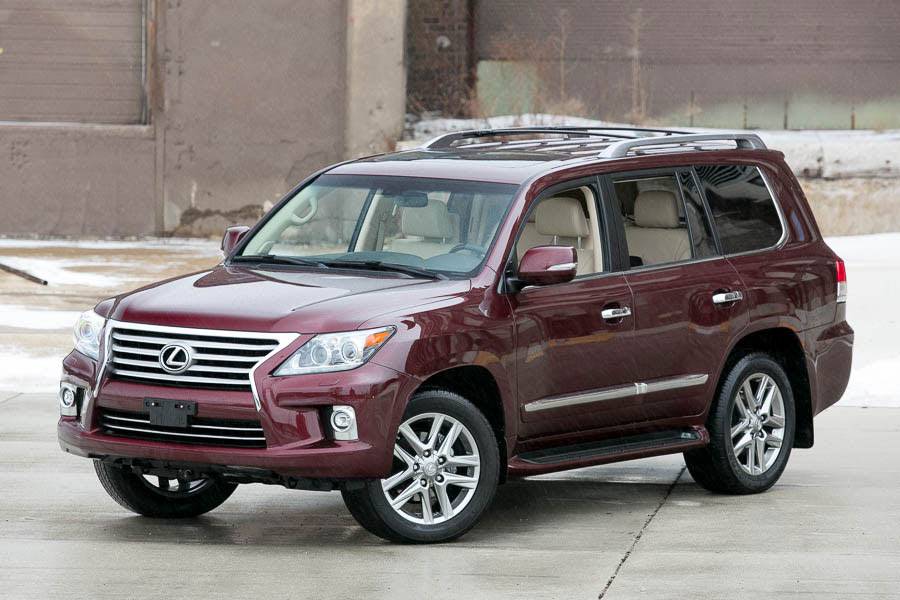 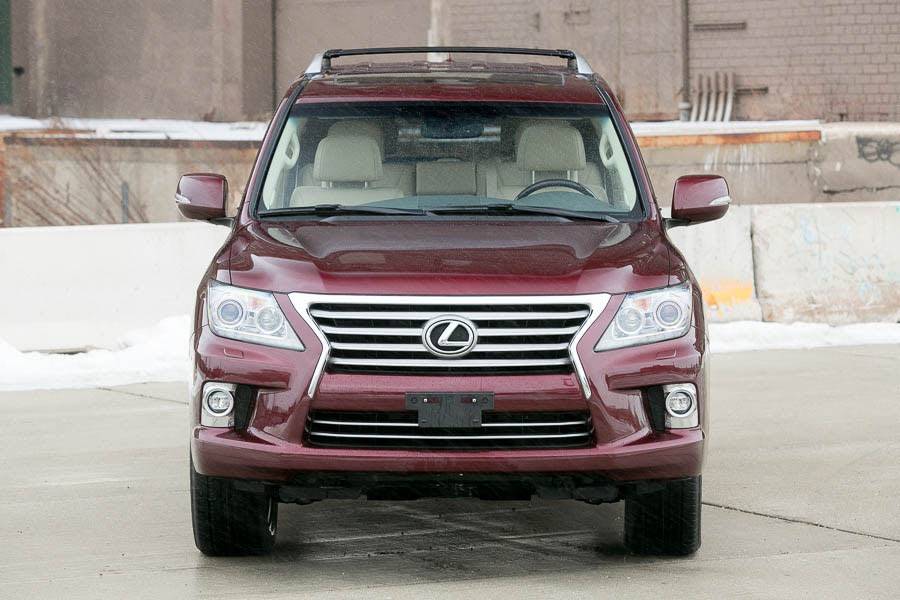 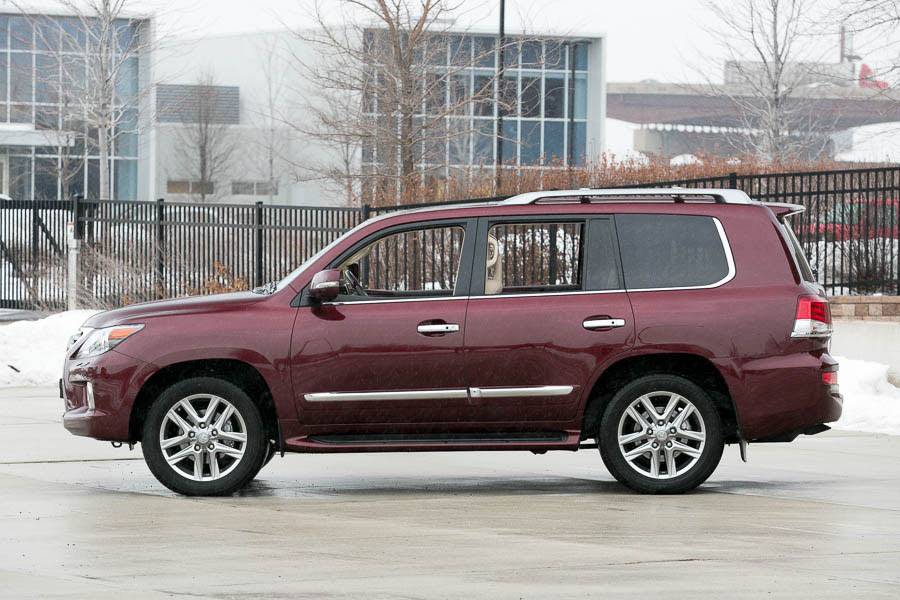 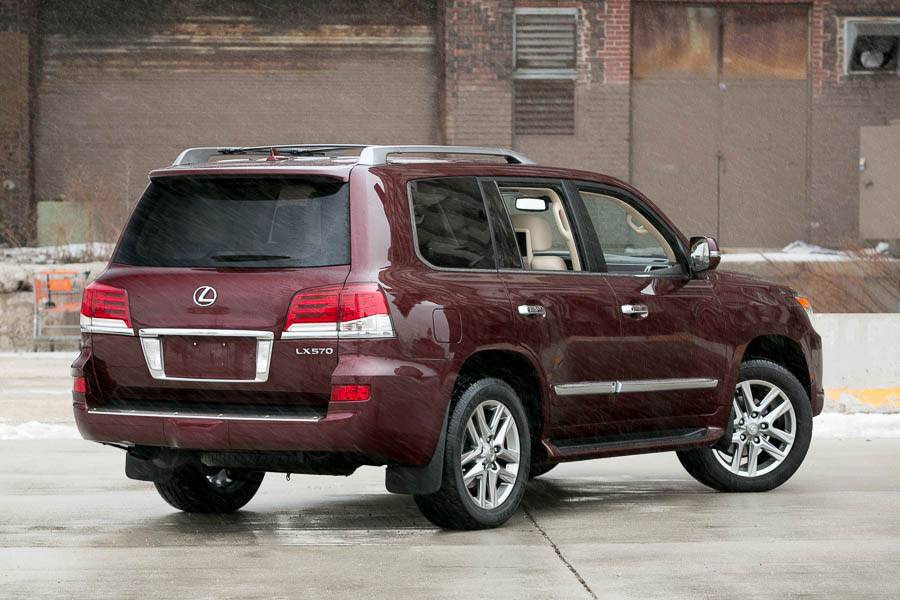 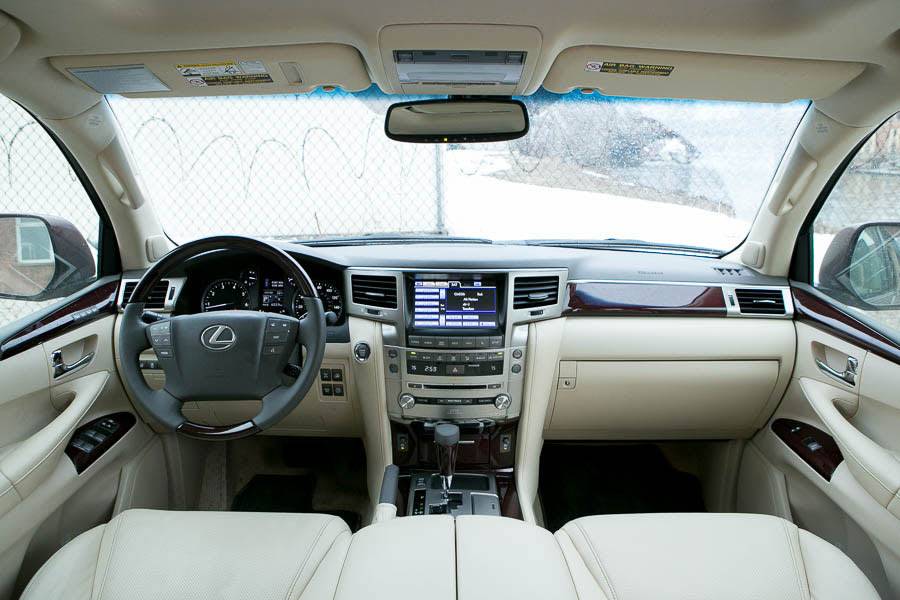 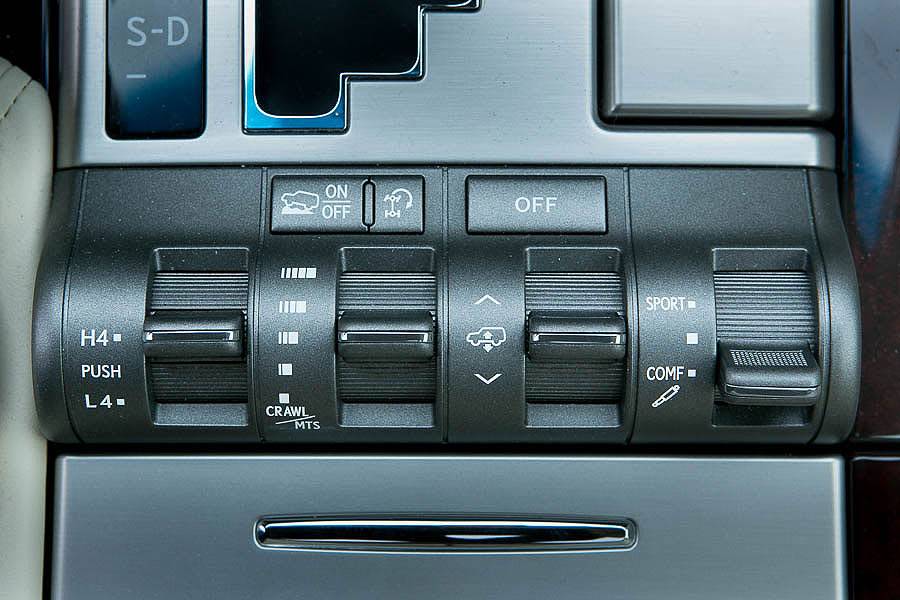 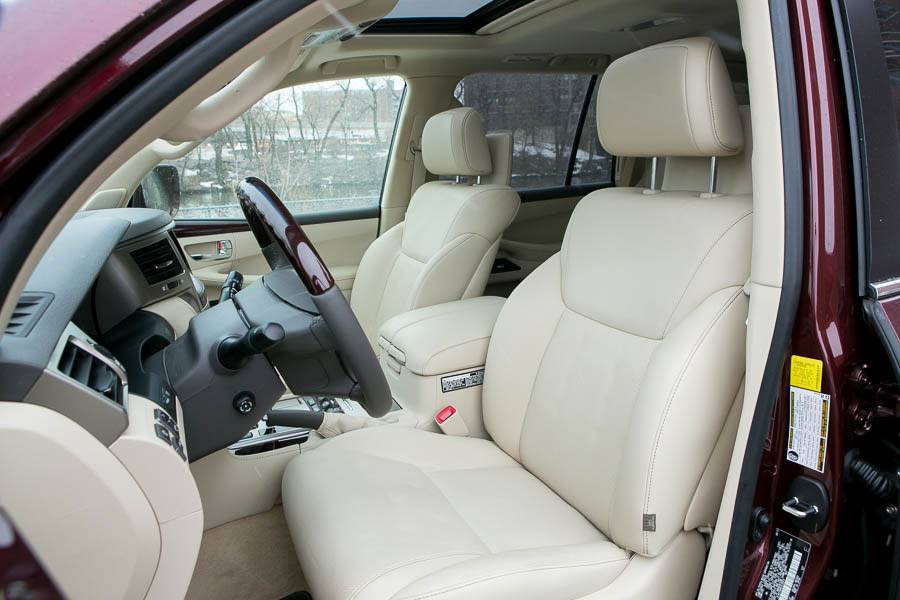 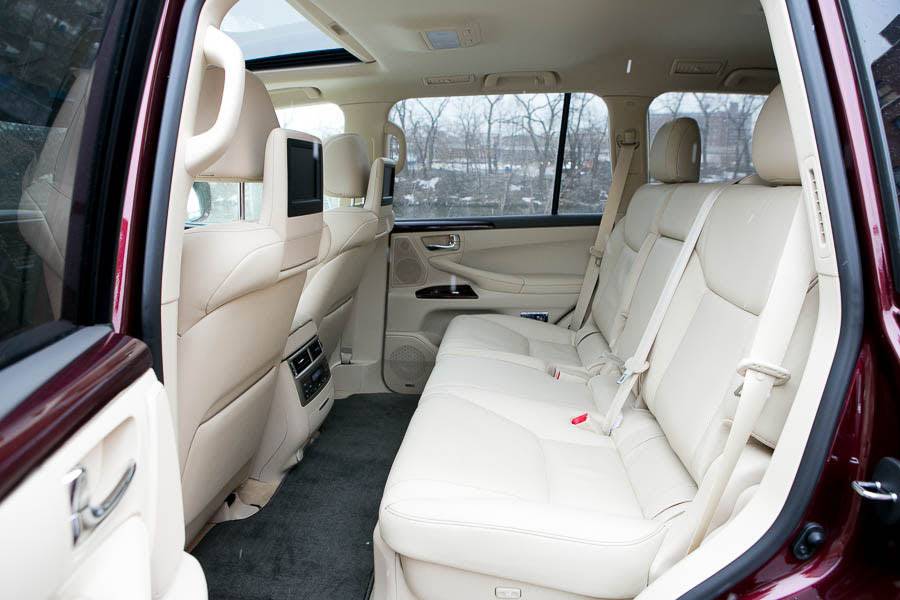 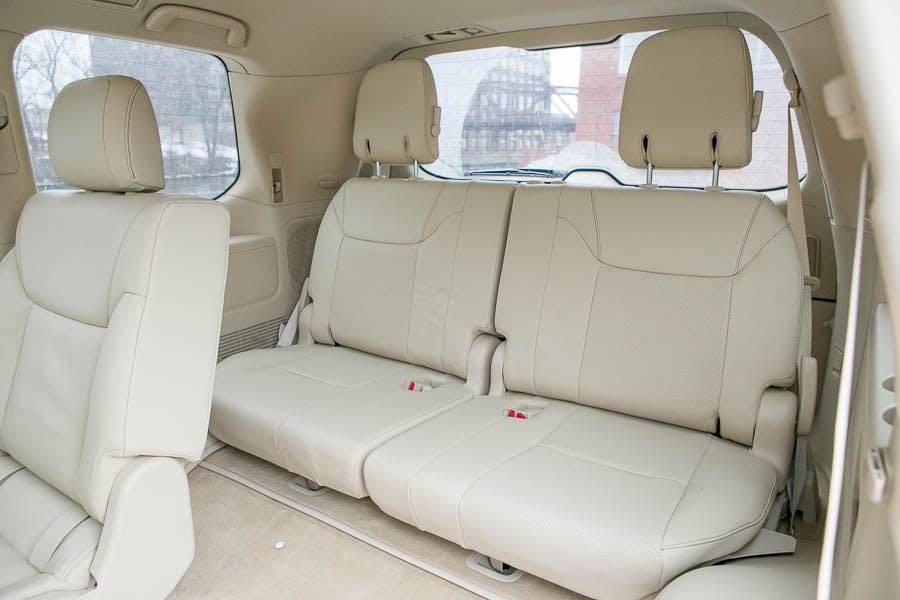 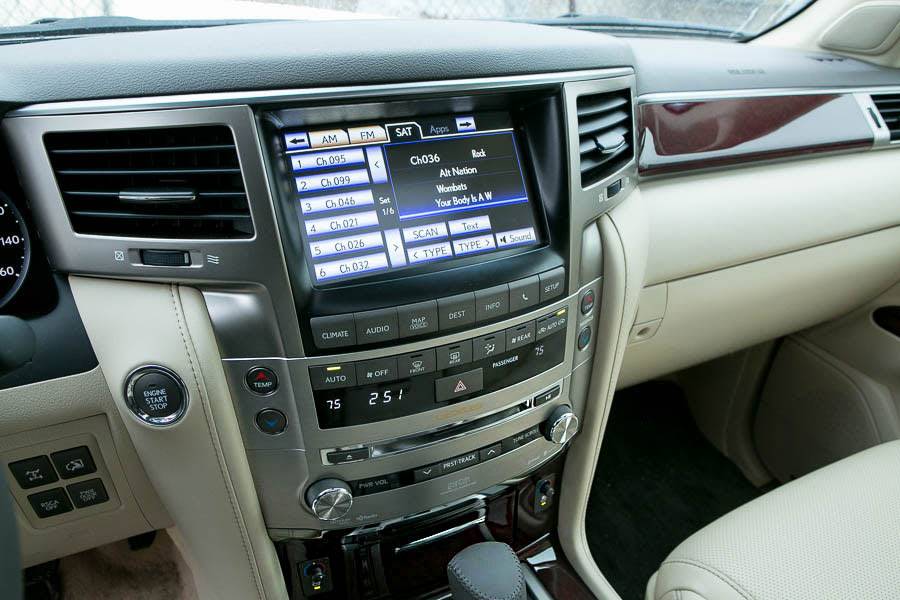 1/11
Lexus&#39; corporate front styling was added to a refreshed 2013 LX 570, which wears the new look well. There are no changes for 2014. | Toggle between photos using the right and left arrow keys. Cars.com photo by Evan Sears

Editor’s note: This review was written in February 2014 about the 2014 Lexus LX 570. Little of substance has changed with this year’s model. To see what’s new for 2015, click here, or check out a side-by-side comparison of the two model years.

The 2014 Lexus LX 570 needs a giant leap to stay competitive in a class of more modern three-row luxury SUVs.

The LX 570 isn’t offensively outdated, but once you step into an Infiniti QX80, Mercedes-Benz GL-Class or Land Rover Range Rover Sport — the latter newly available with a third row — the LX 570’s $83,540 price (including a $910 destination charge) will be harder to fork over.

The eight-seat LX 570’s interior hasn’t been overhauled since the SUV’s last full redesign, for the 2008 model year, and it shows in design and usefulness. Very few cars can stand the test of that much time without an intervention. Compare the LX 570 with its competitors here.

The LX 570 continues to excel on the road, however, with buttery smooth ride quality and a refined engine and transmission. Off the road, the LX 570 is deceivingly go-anywhere ready with genuine off-road hardware. Restyled for 2013, the LX 570 skipped 2012, so compare the 2011 to the 2013 and 2014 here.

Styling
Starting with the 2013 model year, the LX 570 wears Lexus’ hourglass “spindle” grille. The grille treatment varies from mild to wild across the Lexus lineup, but it looks just right on the LX 570. Though the 2013 styling update brought LED daytime running lamps, new headlights and larger fog light bezels, the LX 570’s shape behind the grille is unchanged and fairly generic compared with the curvaceous QX80, the long and low GL-Class and the devilish Range Rover Sport.

How It Drives
The honkin’ 383-horsepower V-8 engine, six-speed automatic transmission and full-time four-wheel drive comprise the LX 570’s only drivetrain, so gas mileage is take it or leave it at 12/17/14 mpg city/highway/combined. Fuel economy isn’t likely a top priority for any shopper eyeballing a 6,000-pound, off-road-capable, three-row luxury SUV. Still, shoppers can choose a more-efficient diesel engine in the GL350 (19/26/22 mpg) or a supercharged V-6 in the Range Rover (17/23/19 mpg) in addition to V-8 options from both. The LX 570 burns through gas like it has a personal vendetta against your wallet. I observed 15.9 mpg driving 294 miles from the Chicago suburbs to Detroit, averaging 66 mph. It’s otherwise a great road-tripper, though, with a comfortable ride, a great seating position and sofa-like front seats.

The 5.7-liter V-8 is a gem of an engine that hauls the massive SUV effortlessly. It’s quiet and refined, yet potent enough to never leave you wanting more power. A six-speed automatic transmission with smart programming never skips a beat with the V-8. Getting that power to the ground is a full-time four-wheel-drive system with a 40:60 torque split between the front and rear wheels; the rear bias helps agility during normal driving.

A center differential distributes torque on demand between the front and rear wheels and is lockable for challenging weather or off-road conditions. A selectable Low-range gear is part of the package, which works in conjunction with the standard adjustable-height suspension to raise ground clearance by 2 inches to clear off-road obstacles. Selectable terrain modes for Rock & Dirt, Mogul, Loose Rock or Mud & Sand tailor driving characteristics to each road condition.

The LX is surprisingly agile in tight spaces, though I did observe front wheel chatter on occasion. Ride quality is top-notch considering the traditional body-on-frame chassis. The suspension is anything but traditional, with adaptive and height-adjustable characteristics. Potholes or abandoned compact cars are no problem for the LX 570 to roll over, with little indication the road surface changed. (No compact cars were injured in the making of this review.) Comfort, Normal and Sport modes adjust the suspension’s firmness, and I found the best ride quality in Comfort and kept it there; there’s no need for the LX 570 to be driven sportily.

Even in Sport mode there was undesirable body roll and body motion in corners; more so than a Range Rover Sport or a QX80 with the optional Hydraulic Body Motion Control. The LX 570 doesn’t hide its 6,000-pound curb weight, and it feels every bit as massive as it looks. You know you’re slinging around a lot of weight when you drive this SUV, unlike the QX80 and Range Rover Sport’s more carlike rides.

Interior
For those who want a tall seating position and accompanying commanding view of the road, the LX 570’s elevated view from the cockpit is practically what the pilot of a low-flying Cessna sees. You’ll never lose the LX 570 in a parking lot, as it towers over everything around. An extremely tall seating position doesn’t mean the LX 570 is difficult to step into thanks to an adjustable height suspension that can lower the ride height automatically when the ignition is turned off for easy access.

Besides the tall seating position, other interior high points include the nicely appointed leather seating surfaces and various leather trimmings with contrast stitching that fit together impeccably. Our test vehicle wore the optional semi-aniline leather trim that’s part of a $1,510 Luxury Package, which also includes a heated steering wheel, cooled front seats, mahogany wood trim and a beverage-chilling Cool Box. Despite the top-notch leather and build quality, the interior shows signs of aging. The silver highlights around the center console, climate vents and gear selector reek of old Lexus — not as modern-looking as Lexus’ recently redesigned products like the GS or IS line of sedans.

The overall design is aging, though not as badly as I expected from a six- to seven-year-old interior. Switches, buttons and the off-road system’s toggle gear are the LX’s tell that it’s not quite the spring chicken any longer. Other SUVs, like the QX and GL-Class, have taken an almost carlike approach to interiors, and you’d be hard-pressed to distinguish them from each automaker’s sedans. Conversely, the LX is clearly an SUV, with a tall, vertical and wide center control panel. Bottom line: You’re not getting Lexus’ most modern and attractive offering like you would from the other brands mentioned.

Both the first and second rows are exceptionally comfortable, with supple cushioning that pairs well with the SUV’s soft ride quality. Considering the SUV’s size, though, I expected more than 34.4 inches of legroom from the three-passenger second row, and I didn’t have a lot of extra room to unwind like I did in the QX80 (41 inches) we tested at the same time. Comfort in the LX’s three-passenger third row is about even with the QX80’s third row, but the Infiniti’s third row is much easier to access.

Ergonomics & Electronics
The first step I take in any late-model Lexus is to turn off the “Auto screen” feature within the depths of the Lexus Enform system. Auto screen automatically reverts to a default display after sitting idle, rather than staying on the radio or media display. The LX’s Enform multimedia system uses a touch-screen and real buttons for controlling navigation, stereo and climate systems, as opposed to Lexus’ mouse-style controller, a multi-function knob or capacitive buttons. It works well, with the exception that the display is borderline too far away for a touch-screen.

Standard features include navigation; in-car apps for Pandora, Bing, Yelp and more; USB/iPod, Bluetooth phone and streaming audio; HD radio with iTunes tagging; and satellite radio with a 90-day free trial subscription. An available Mark Levinson stereo bumps the speaker count from nine to 19 and includes an in-dash six-CD player, though I wasn’t blown away by the $2,350 option. I also wanted somewhere to put phones and music players to match the generous range of connectivity. There isn’t much room besides the two cupholders and a shallow pad to store devices.

My LX 570 tester was priced at $88,555 including a $910 destination charge, stereo and other options like a rear-seat DVD player and Lexus’ Luxury Package. One feature I could do without was the Cool Box in the storage area between the front seats. It attempts to keep the items in the box cool with air from the air conditioning system, and it didn’t work very well on my five-hour road trip. It works only when the engine is running, so it doesn’t even have the benefits of a cooler.

Cargo & Storage
Second- and third-row versatility is another sign of the LX’s age. The second row’s power sliding and tumbling feature isn’t as seamless as Infiniti’s QX80, whose one-touch motion is so easy it’s doable with one finger.

The LX’s 50/50-split, power-operated third row doesn’t fold down, but rather up. Each split seat folds up to the passenger and driver side of the rear cargo area, but it’s slow and bulky, and even when the seatbacks are folded down for both rows they don’t create a flat load floor like the QX80 does; they’re elevated about a foot off the main cargo floor. Maximum cargo capacity is 83.1 cubic feet, which is short of the QX80’s 95.1 cubic feet and the GL-Class’ 93.8 cubic feet, but it’s a lot larger than the Range Rover Sport’s 62.2 cubic feet of maximum cargo space.

Out back is a clamshell-style hatch with a bottom section that folds down like a pickup truck’s tailgate and a top half that opens like a regular liftgate. This style has been exiting the mainstream for a while, and I’m not convinced it should be around any longer considering the extra reach it takes to place items in the cargo area.

Safety
The LX 570 has not been crash-tested.

One of the biggest oversights in our tester was a lack of parking assists. The backup camera isn’t enough by itself to make parking the huge LX 570 a confidence-inspiring experience. The driver’s significant other should prepare to get out and spot if the buyer doesn’t choose the $1,000 Intuitive Park Assist with front and rear cameras and parking sensors. Infiniti’s base QX80 is more than $20,000 less expensive and includes the company’s great Around View Monitor, a top-down camera system with front and rear sonar parking sensors, standard, which makes parking the equally massive QX80 as easy as parking a midsize sedan compared with the LX 570.

The LX’s standard safety equipment includes side curtain airbags for all three rows of seating. Adaptive front lighting illuminates corners as it turns with the steering angle, and rain-sensing wipers are also standard, along with Entune’s Safety Connect with automatic collision notification, stolen vehicle locator and an emergency assist button. See here for more safety equipment.

See how well child-safety seats fit in the LX 570 in our Car Seat Check.

Value in Its Class
Lexus doesn’t churn out many LX 570s; it was the luxury automaker’s lowest-volume model in 2013 — besides the LFA supercar and the discontinued HS — selling 4,625 units. The QX80 sold 13,148 and the GL-Class raked in 29,912 sales. Low sales don’t always indicate an underperformer, but there are more features and fuel economy for the money in the three-row luxury SUV competition from Infiniti, Mercedes-Benz and Land Rover.

The aging LX 570 sits on a great platform for comfort and off-road capability, and a redesign could take everything we like about Lexus’ more modern models and make a much more competitive luxury three-row SUV.