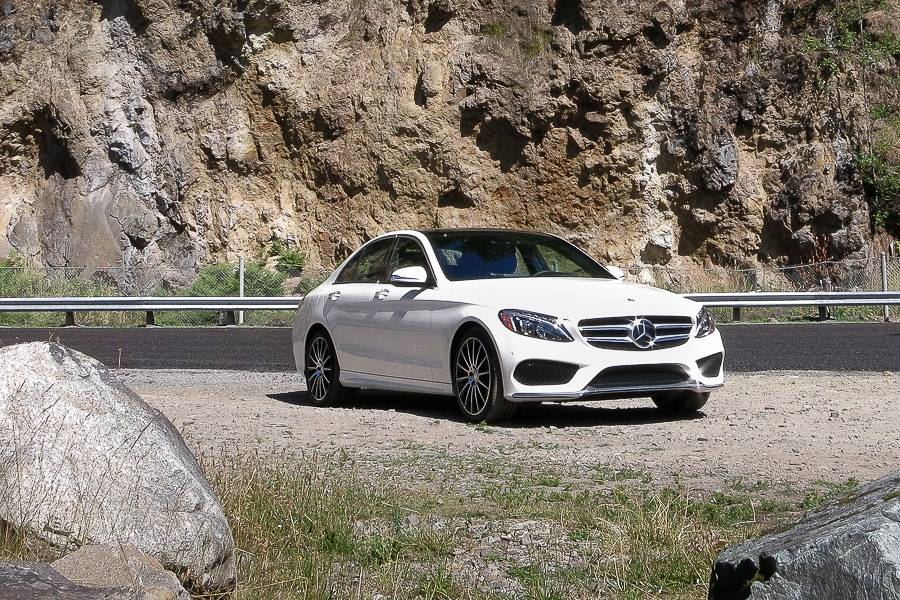 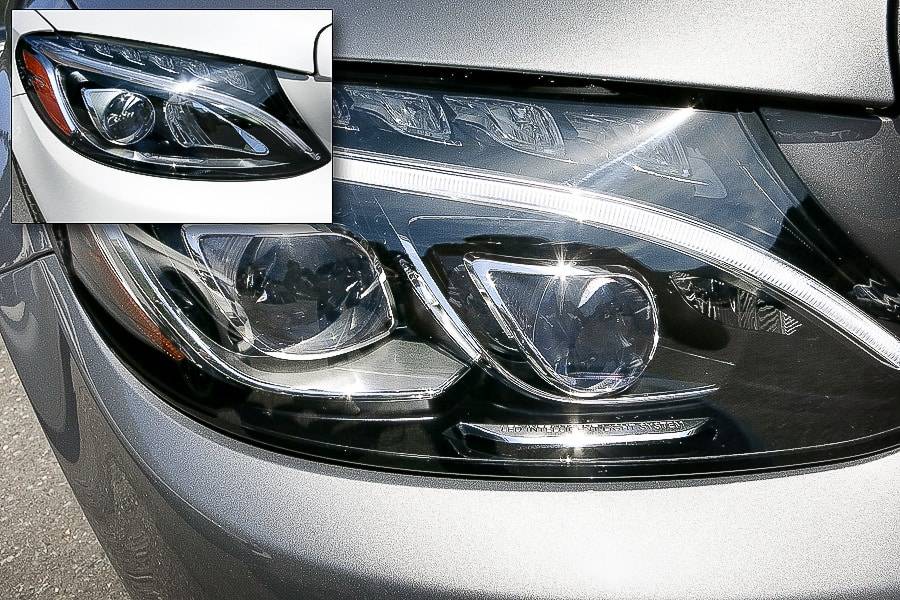 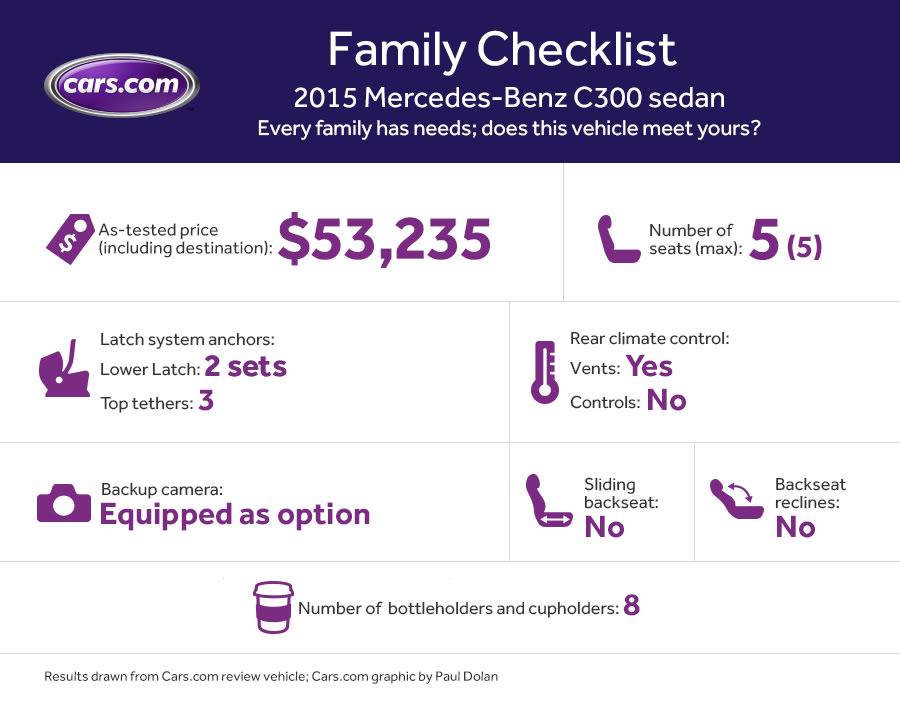 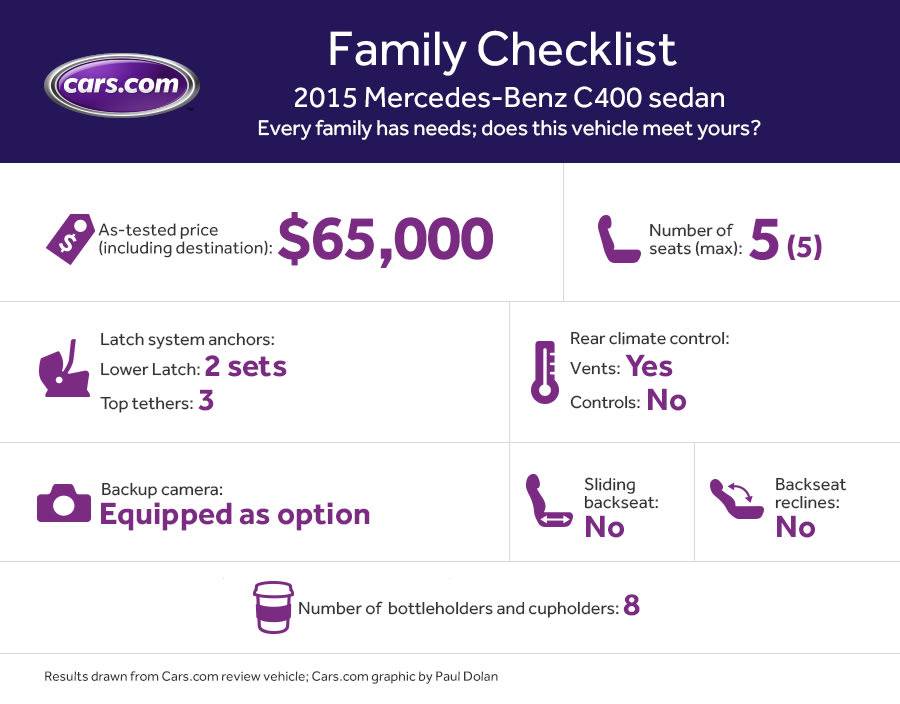 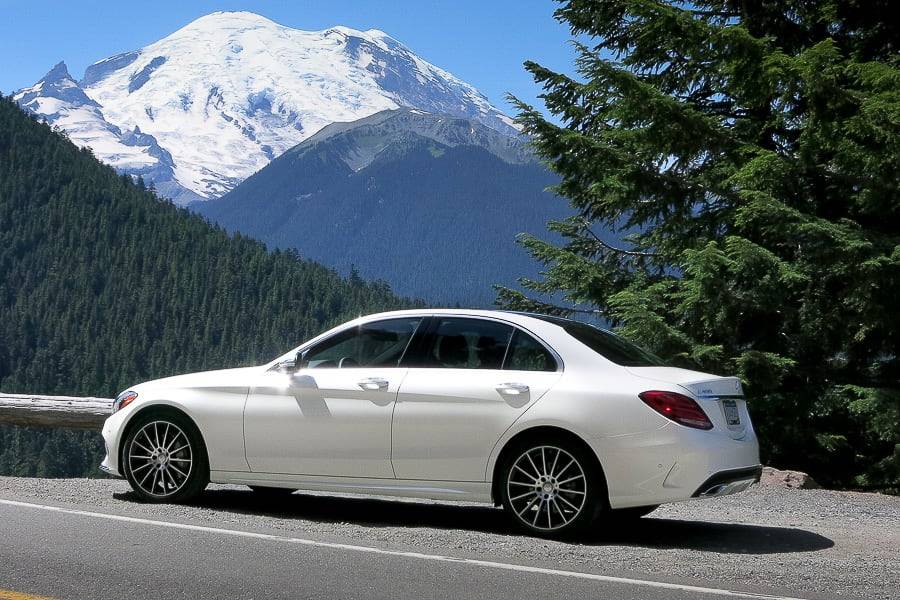 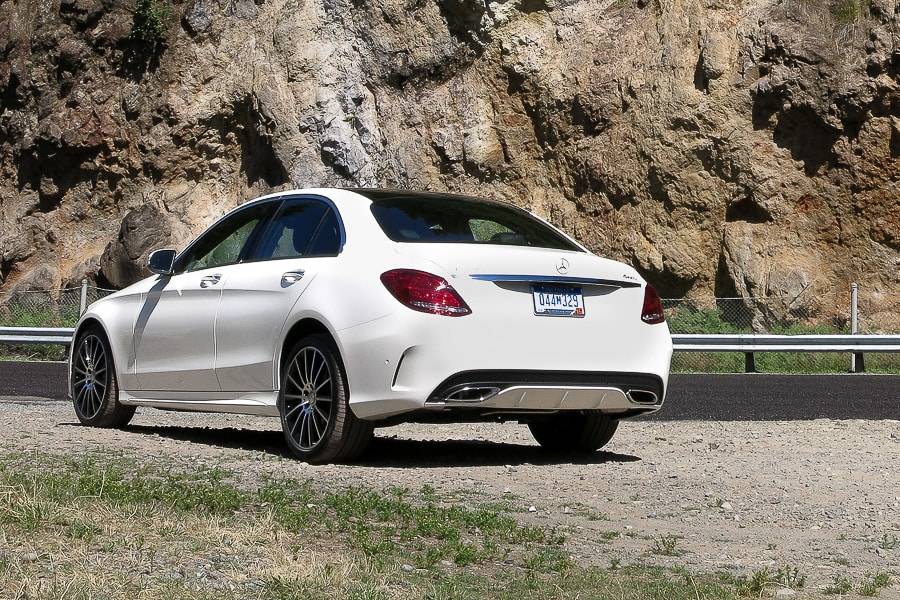 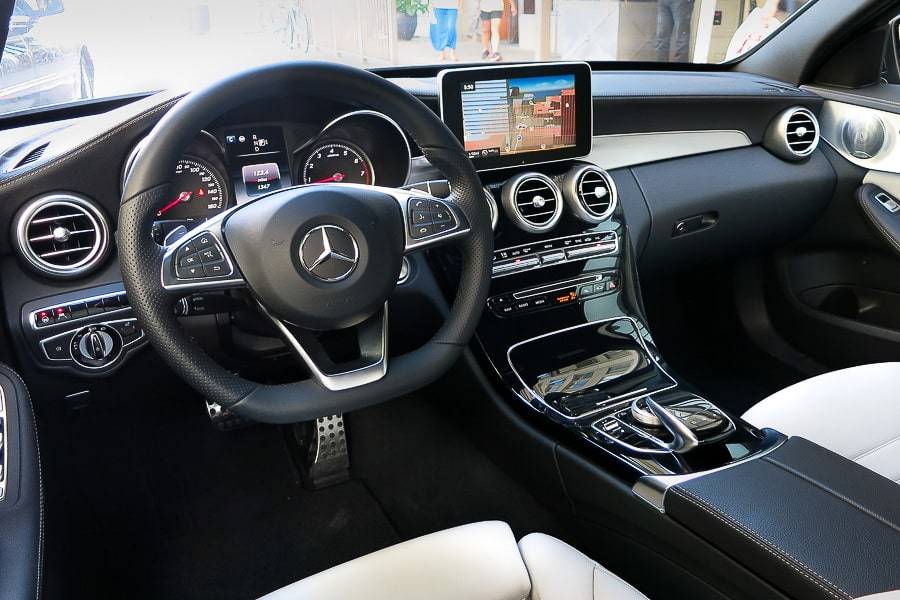 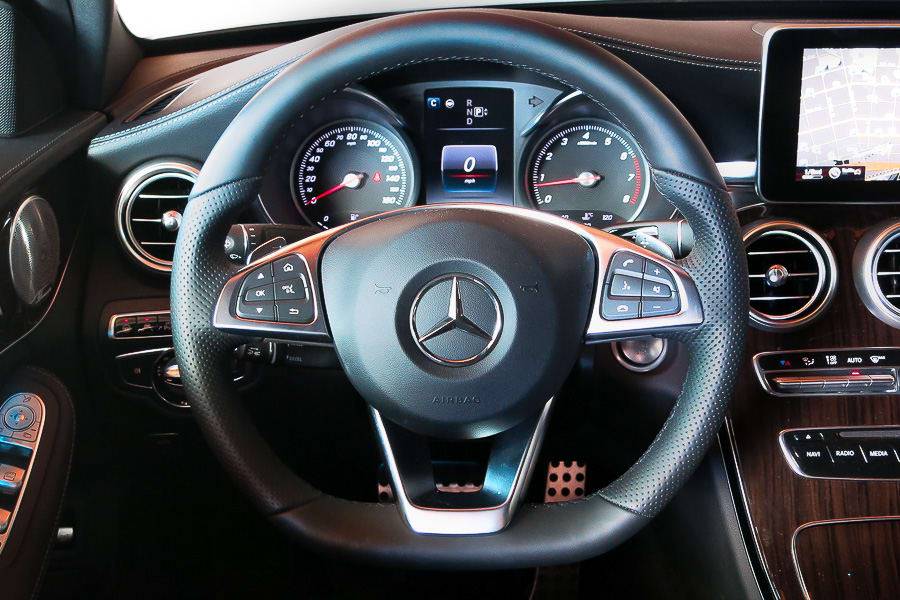 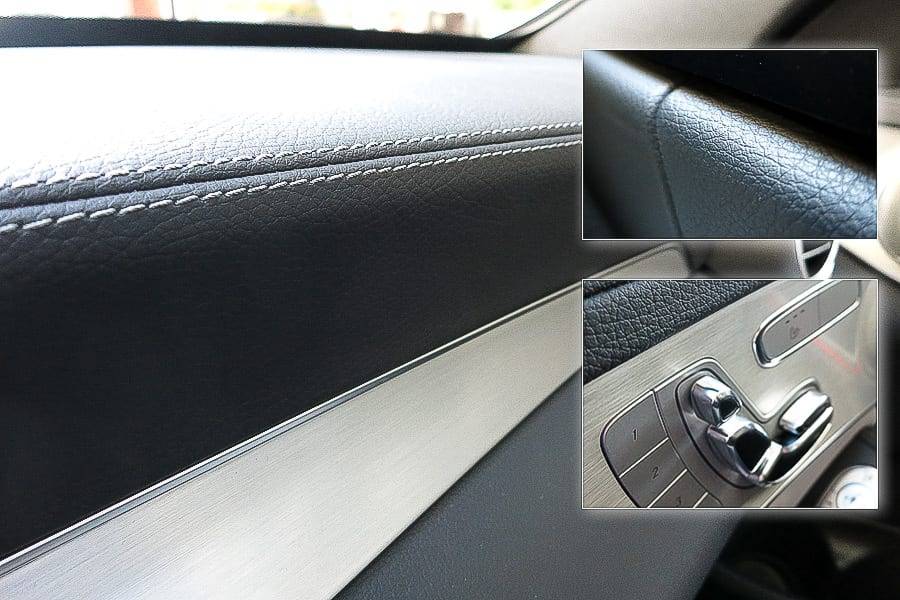 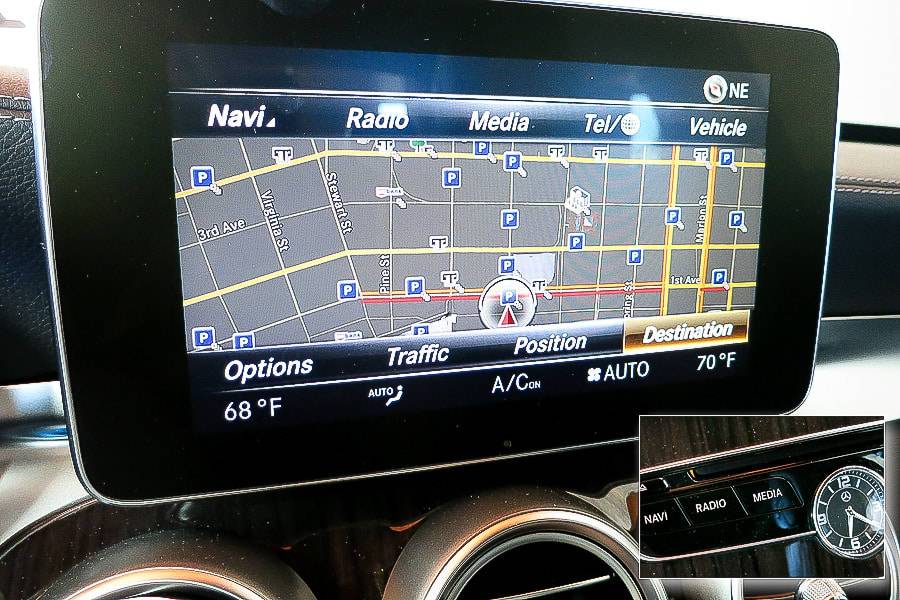 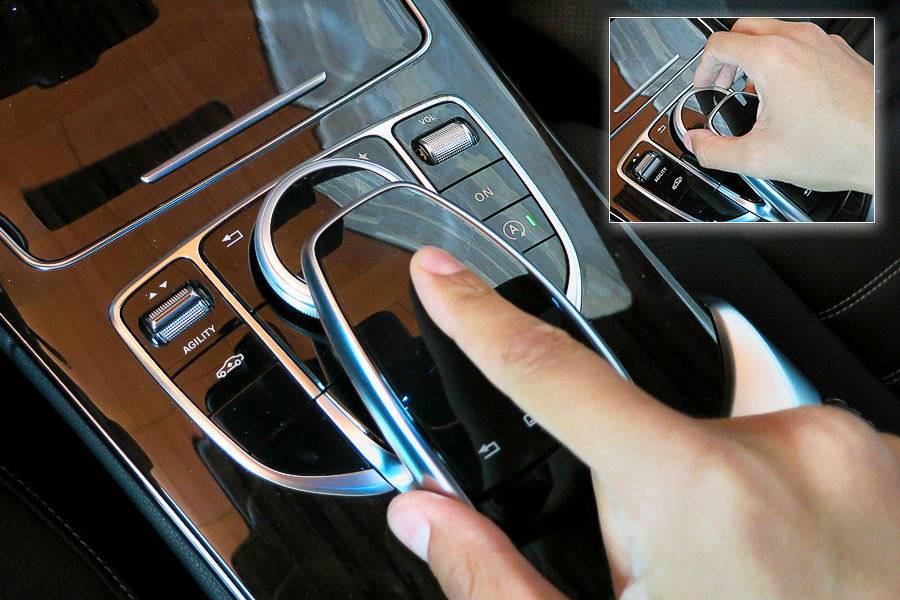 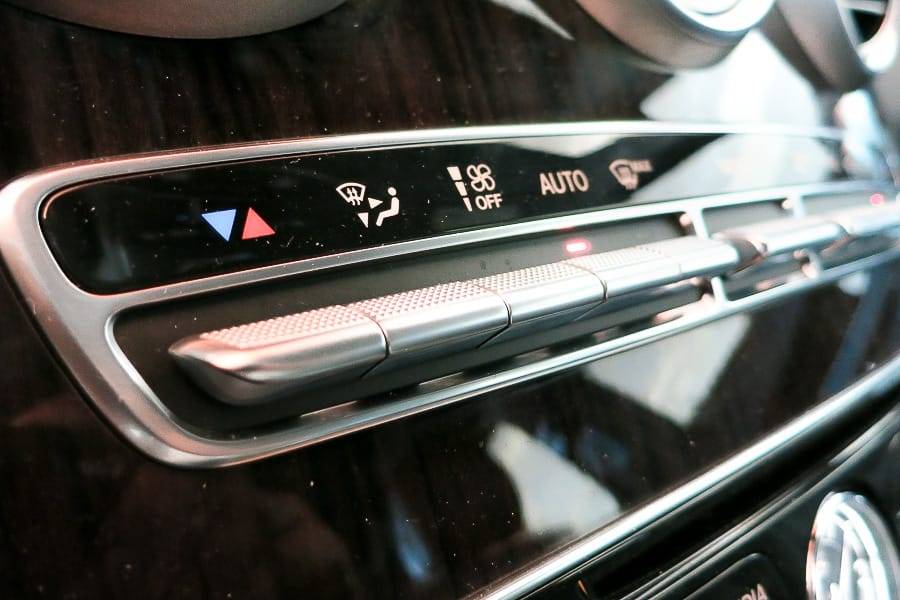 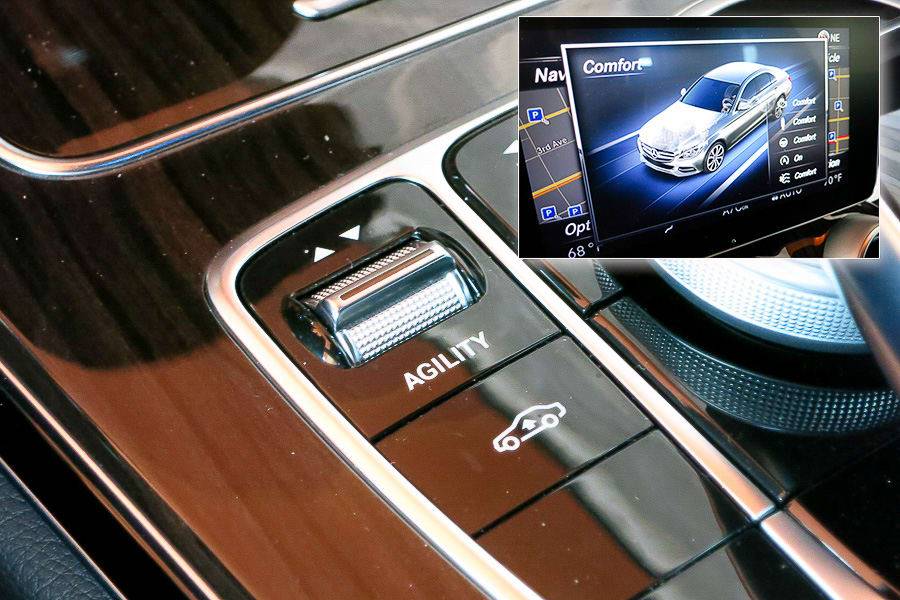 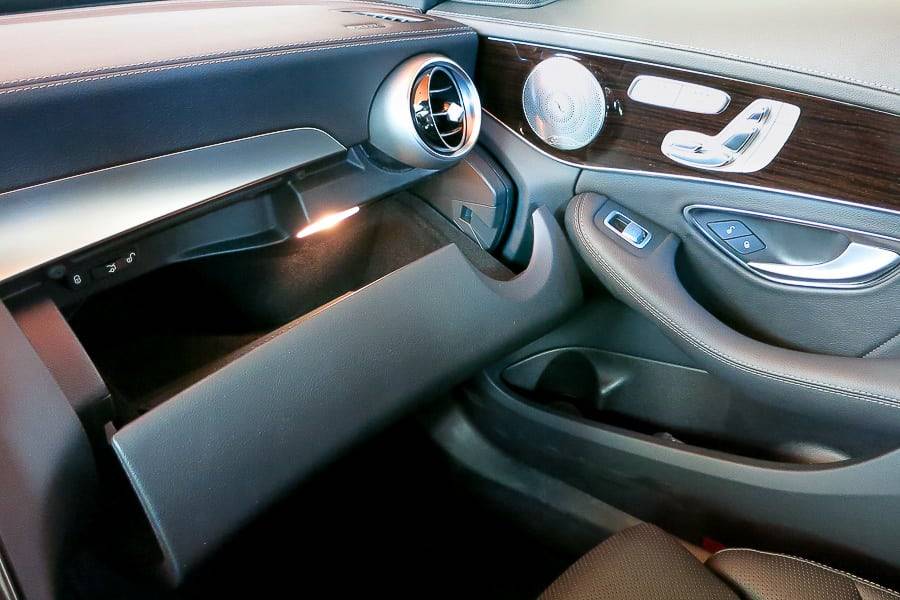 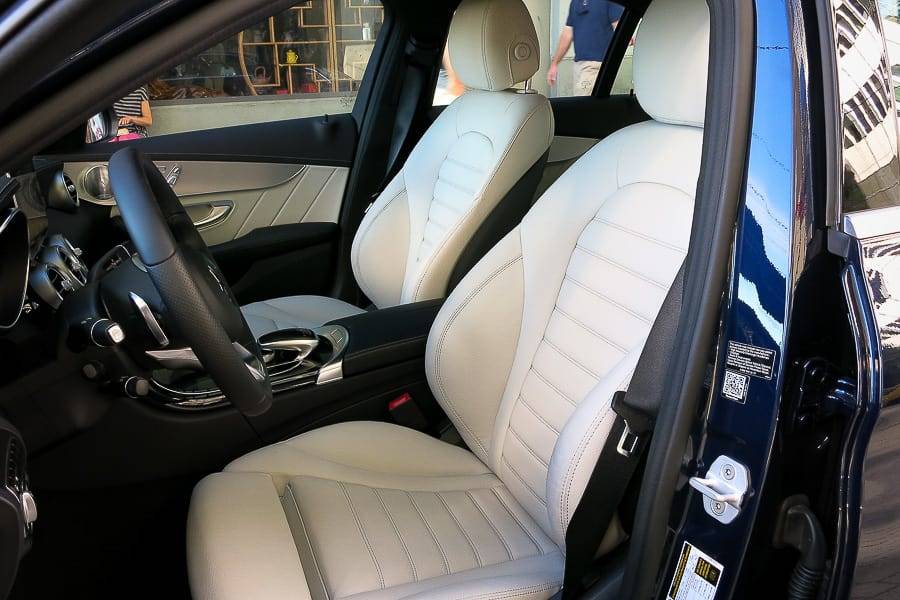 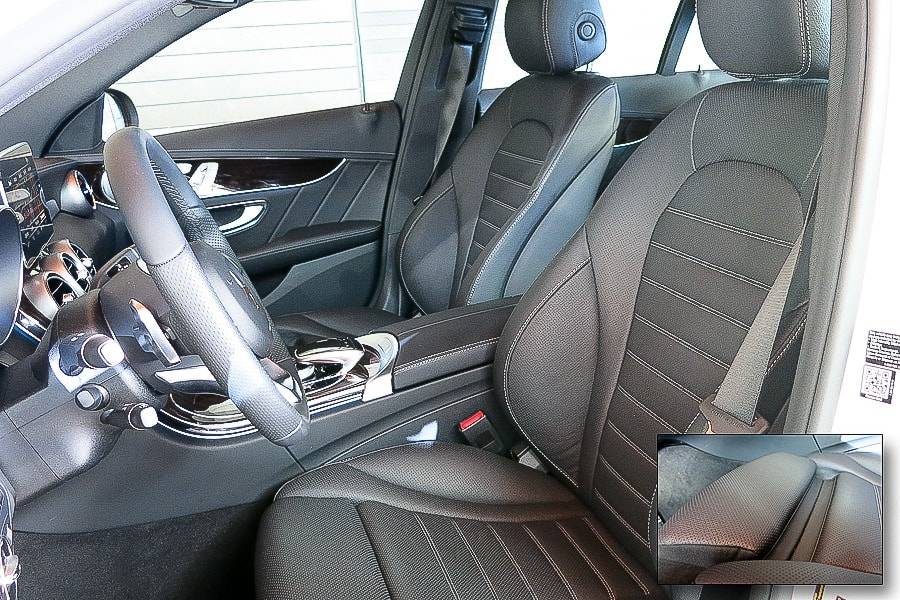 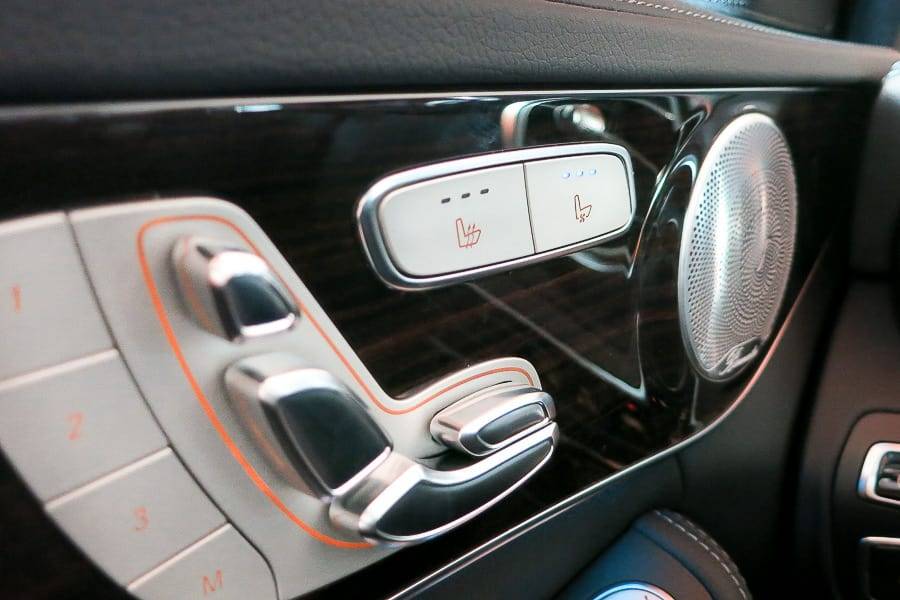 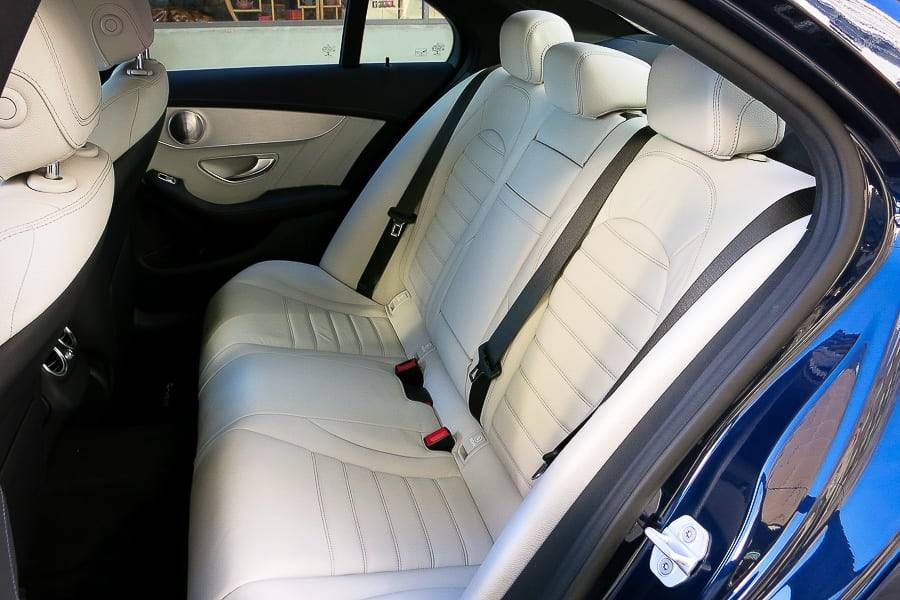 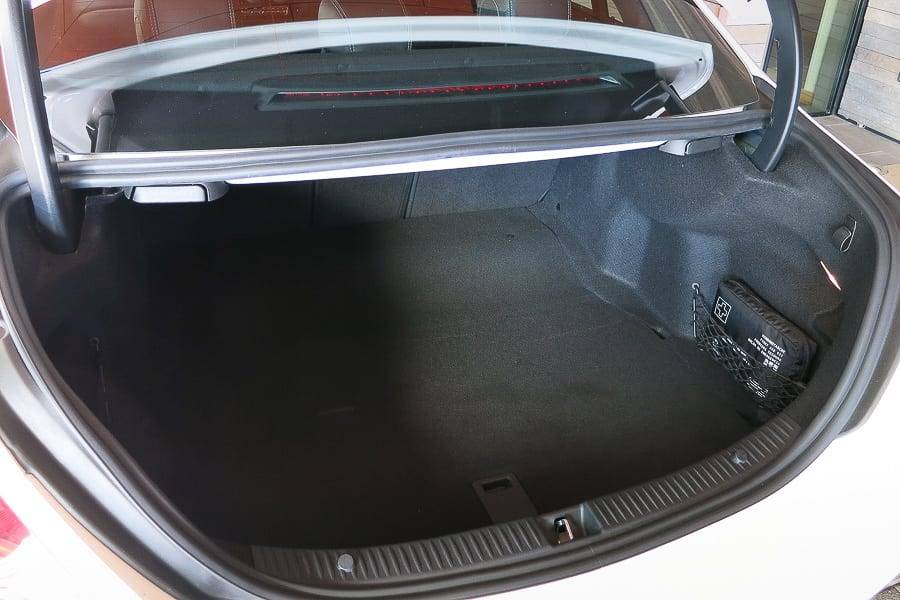 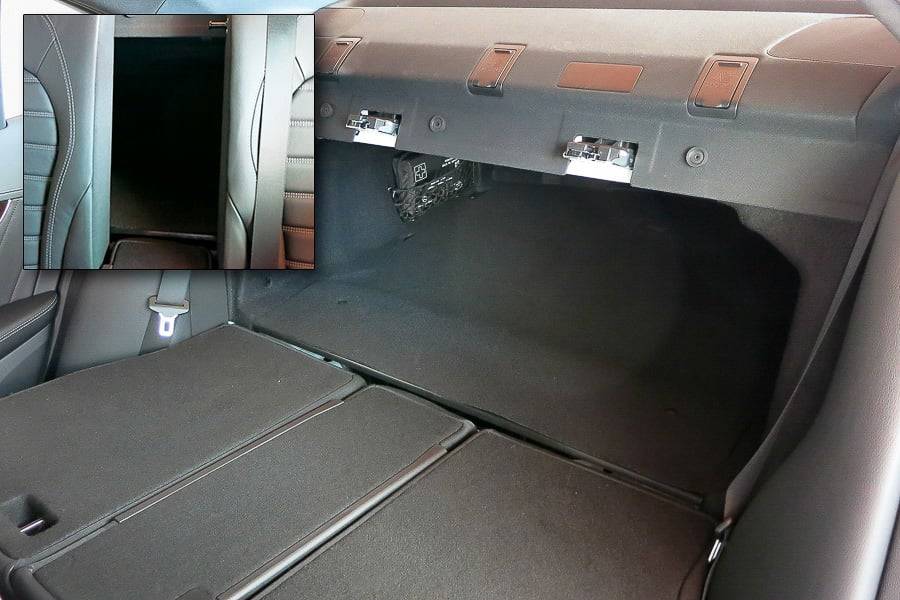 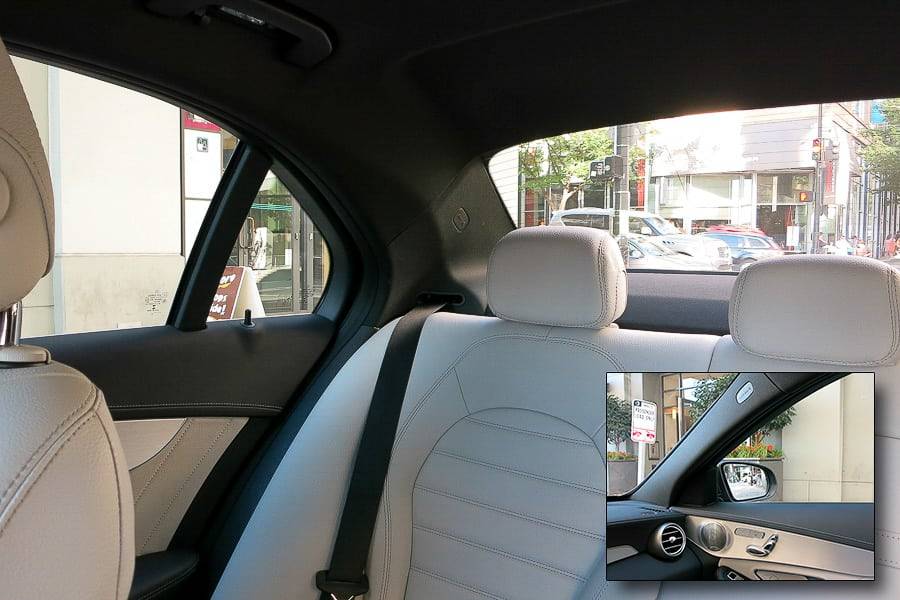 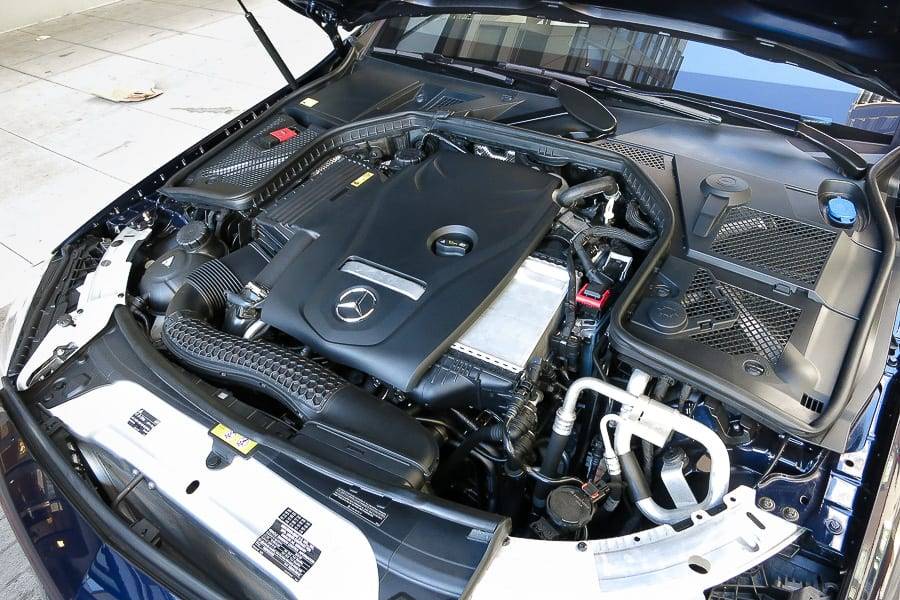 1/22
The C-Class has a miniature S-Class look, which is typical for any given generation of the car. Our test cars all had the Sport package; non-Sport cars have less-aggressive bumpers. Get the Luxury package, and you trade the three-pointed star on the grill | Toggle between photos using the right and left arrow keys. Cars.com photo by Kelsey Mays

The 2015 Mercedes-Benz C-Class is no all-out sport sedan, but it’s one hell of an appealing luxury car.

If you want a taste of the good life without eviscerating the kids’ college fund, entry-luxury cars like the C-Class have answered that kind of call for more than two decades. Or not: The outgoing C-Class sedan sputtered into last place in 2013’s $46,000 Sport Sedan Challenge (read it here). That was a turbocharged four-cylinder C250 Sport, and we drove a V6-powered C350 soon after that didn’t redeem much. If this is the baby Benz, a lot of bathwater needed draining.

Drain it, Mercedes did.

With the CLA-Class now anchoring the bottom of the lineup, Mercedes moved the redesigned C-Class upmarket in terms of both quality and price. The redesign hits dealerships late this month in all-wheel-drive C300/C400 form, and in early 2015 in rear-wheel-drive C300 form. From luxury to technology, it’s eminently more desirable than the car it replaces.

I drove the all-wheel-drive (4Matic) C300 and C400 sedans, both with Sport packages. The C-Class coupe soldiers on in prior-gen form for 2015, but company officials said to expect a coupe replacement within a year or so. Oh, and yes, there will be a high-performance AMG version.

Exterior & Styling
Mercedes-Benz has a habit of tailoring successive generations of the C-Class after the latest flagship S-Class, and the new C-Class follows that mold even more than usual. The sinewy headlights and curvaceous lower grille signal a clear resemblance to the brand’s top-flight sedan, which Mercedes redesigned just a year ago. The C-Class is now a little closer in size, too: Overall length is up 3.7 inches versus the outgoing sedan, and width is up 1.6 inches.

Despite the extra size, overall weight is down as much as 200 pounds versus the old C-Class sedan thanks to a chassis that mixes aluminum and steel versus the all-steel chassis in the outgoing car. Officials say much of the new Mercedes-Benz C-Class’ body panels — including the hood, doors, roof and trunk — are aluminum, too.

How It Drives
Fire up the C300’s 241-horsepower, turbocharged 2.0-liter four-cylinder, and this year’s extra standard power is immediately noticeable. The engine has little in common with the outgoing C250’s 201-hp, turbo 1.8-liter four-cylinder. It has a flat torque curve — 273 pounds-feet that plateaus from just 1,300 rpm on up — that evokes the BMW 3 Series 328i’s excellent turbo four-cylinder. Where the 2014 C250 ran out of steam, the new C300 moves out. Accelerator progression has improved versus the prior car’s sleepy pedal, and the standard seven-speed automatic kicks down readily with little gear hunting, particularly in the drivetrain’s Sport and Sport Plus modes. You control all that through an Agility Select switch, which also adjusts steering assist, accelerator progression and (in Eco mode) climate control intensity in one convenient toggle.

With the optional Airmatic adaptive air suspension — a first for the C-Class — Agility Select also changes suspension damping. In the all-wheel-drive, Airmatic-equipped C400 I drove, the system’s various modes dialed up subtle but noticeable differences in ride comfort. Still, the C-Class lacks the all-consuming isolation that characterizes other Airmatic-equipped Benzes. Ride composure was good over rapid dips and rises on my drive, but Airmatic allowed pockmarked highways to send up a degree of cabin disturbance that was little different from my time in a fixed-suspension C300 Sport; the 1-inch-larger wheels in the Airmatic car (19s) shouldn’t be enough to offset the system’s ride-control capabilities. There are also fixed (non-Airmatic) base and Comfort suspensions, as well as cushier 17-inch wheels and higher-profile tires, across the lineup. All those will affect ride quality, so test-drive one and decide for yourself. My take? Airmatic, a stand-alone option on the C300 and C400, isn’t worth its $1,190 price.

Mercedes-Benz expects fewer than 20 percent of C-Class buyers to opt for the C400, and it’s easy to see why. It’s a capable car whose turbo, 3.0-liter V-6 makes a stout 329 hp, and the wall-o’-torque (354 pounds-feet from just 1,600 rpm) crests early to send you flying past slower traffic with half the pedal to go. But it’s unnecessary; the C300 does this in a pinch, too, albeit with less power in reserve.

It handles better, too. Though Mercedes-Benz claims just a 2 percent difference in weight distribution between the C300 and C400, the latter feels more nose-heavy, with a touch more sloppiness up front in sweeping corners. Flip the Agility Select to Sport Plus, and the Airmatic seems to quell body roll better than even the sport-tuned fixed suspension, which pitches off-center a bit as you throw it around. But the C-Class is still no 3 Series or Cadillac ATS; the tail was loathe to drift in my all-wheel-drive test cars, and the sole rear-driver of the lineup — the non-4Matic C300, available in 2015 — doesn’t come with the bigger engine.

Brake-pedal feel, at least, improves a lot versus the outgoing C-Class’ mushy pedal. And both the C300 and C400 steer with a light touch, even in Sport Plus mode. The wheel feels precise enough as you dial into a corner, but overall feedback has a degree of numbness at just about every speed. It keeps with today’s luxury cars, but it will limit the C-Class’ appeal to driving enthusiasts.

Interior
If luxury enthusiasts exist, the C-Class will get their trophy. Real wood and metal adorn a cabin that sports first-rate materials from the dashboard to the doors. Anywhere your arms, elbows or knees touch has padding, with available stitched MB-Tex vinyl on areas of the dash and upper doors. Consistent, low-gloss materials are virtually everywhere — a level of quality you don’t often find in this class.

My C300 and C400 had comfortable sport seats, save for their smallish lower cushions. Non-sport seats with lower side bolsters are also available. MB-Tex vinyl seats are standard; leather seats are optional. Alas, the backseat still sits low to the floor — an issue in the previous C-Class, too — without a lot of payoff in headroom. Despite claimed improvement in backseat space, legroom for adults remains only adequate.

Cargo & Storage
Cargo volume in the new C-Class is a competitive 12.8 cubic feet, which is up slightly versus the outgoing C-Class (12.4 cubic feet). A new (and standard) 40/20/40-split folding rear seat replaces last year’s 60/40-split seat, and it’s remarkably well-executed.

Ergonomics & Electronics
Mercedes’ Comand system, with a 7- or 8.4-inch screen, is controlled by a rotary knob and a new touchpad. You can spin and click through submenus if swiping on a touchpad isn’t your thing.

Standard audio includes Bluetooth phone and audio streaming, HD radio and USB/iPod integration. Mercedes-Benz packages satellite radio with a Burmester stereo, which is optional in the C300 and standard in the C400. The Burmester is pretty darn good.

Safety
As of this writing, the 2015 Mercedes-Benz C-Class had not been crash-tested. Standard safety features include seven airbags plus the required antilock brakes and stability system. A drowsy-driver detection system and forward-collision warning system with automatic braking are also standard. That’s rare, even among luxury cars. Alas, a backup camera — standard on cars as plebian as the Honda Fit — is optional.

Rear torso airbags are also optional, which brings the total airbag count to nine. (Head-protecting curtain airbags for front and backseat occupants are standard.) Adaptive cruise control with full-stop braking and steering support, which can nudge the wheel left or right to stay in your lane, is part of a $2,800 Driver Assistance Package, which also includes blind spot, cross traffic and lane departure warning systems. It also adds a lane-keeping system that applies selective brakes (not the steering support) to correct your course if you start to drift. It won’t intervene if you have a turn signal on, and should you need to swerve, you can overcome it easily with steering effort.

Value in Its Class
The all-wheel-drive C400 gets an EPA-estimated 22/29/24 mpg city/highway/combined, which is decent fuel economy for the six-cylinder competition, but EPA figures are pending for the more popular C300. Mercedes says it expects forward movement on EPA figures, which would suggest better ratings than the current C250/C300, which are as high as 25 mpg combined.

The outgoing Mercedes-Benz C-Class sedan base price started at $36,725 for a rear-drive C250 Sport, including destination. Mercedes says it has no plans to reprise that trim, making the C300 the new base. Rear-drive models will start at $39,325 when they go on sale in early 2015. The extra power and newly standard forward collision warning justifies much of the increase. Other convenience features incur the usual shuffle: A memory driver’s seat and power tilt/telescope steering column move to the standard equipment list, while last year’s moonroof moves to the options list.

A loaded C400 retail price should top out around $65,000, which is a modest increase over the current C350. I suspect shoppers will accept it. Even with the CLA-Class on sale, the Mercedes C-Class topped 33,000 sales through the first six months of 2014. That makes it the second most popular Benz and fifth most popular U.S. luxury nameplate. Outside the U.S., it’s the brand’s best-selling car, according to Mercedes. This 2015 redesign should help it stay there — and also move up a few rungs among U.S. luxury shoppers.