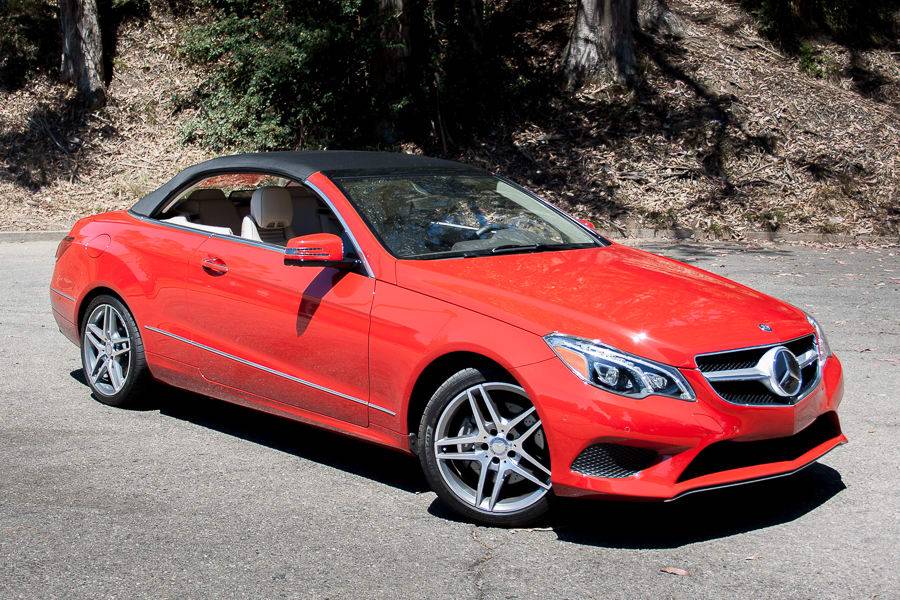 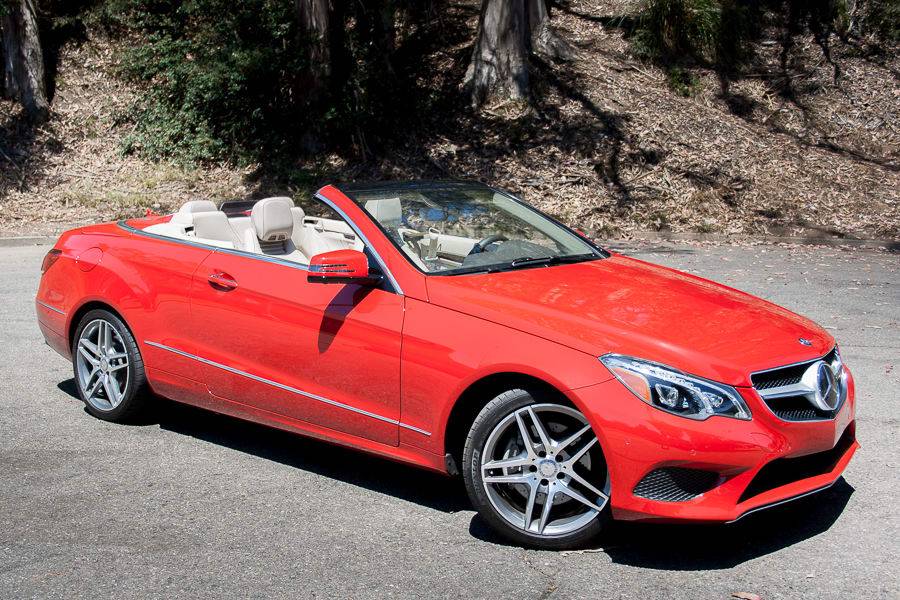 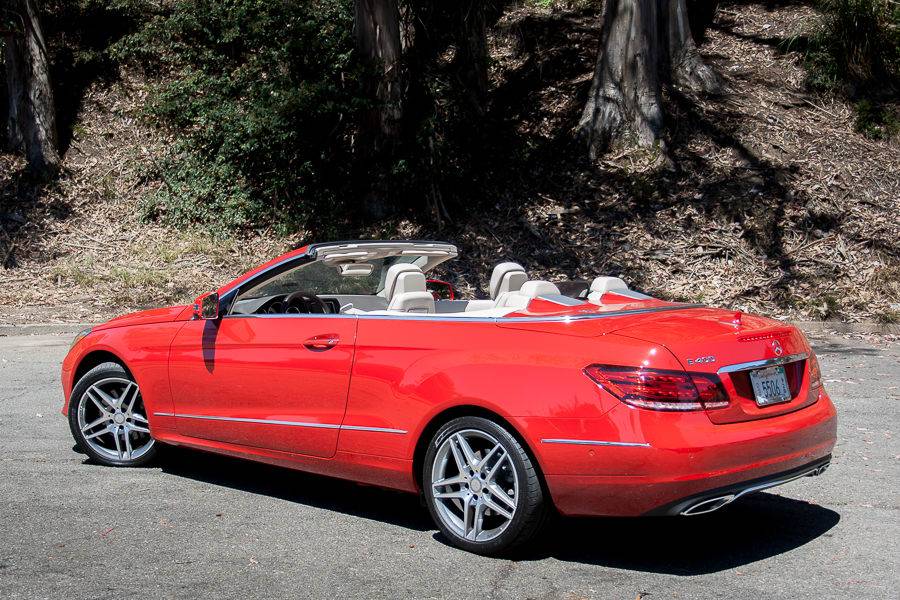 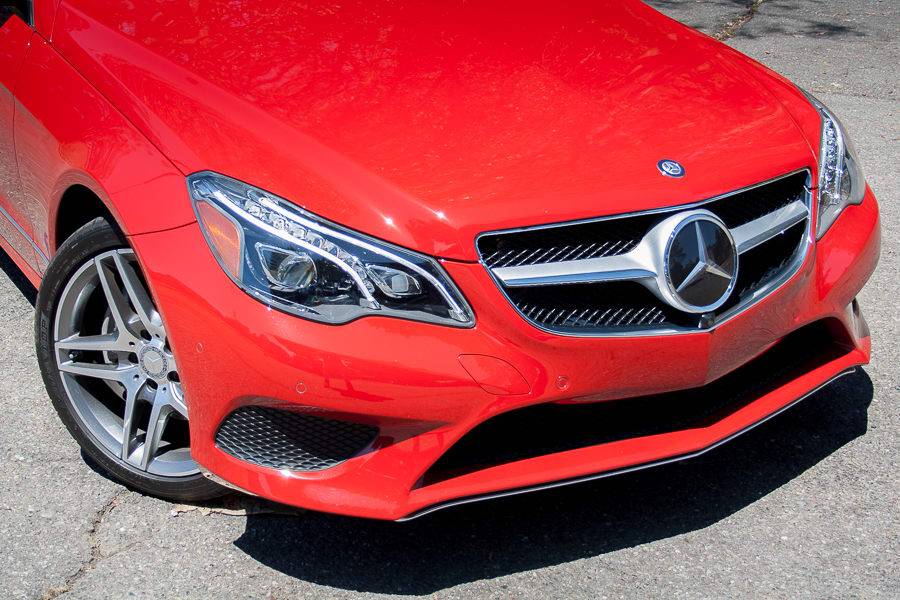 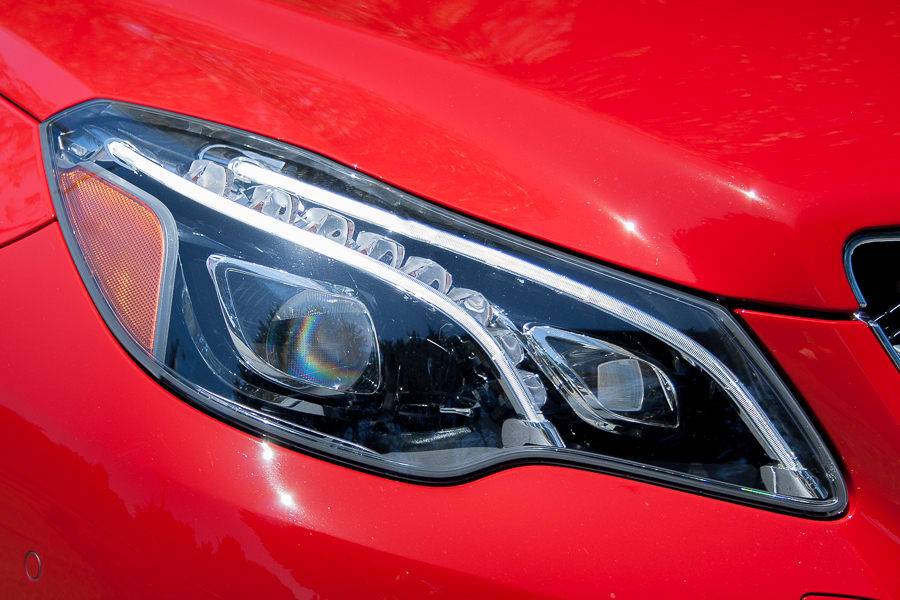 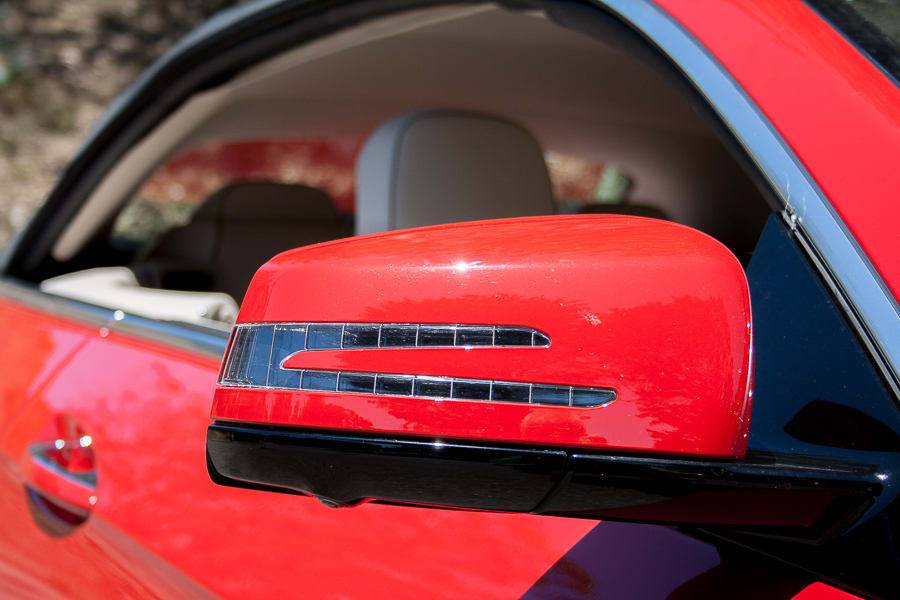 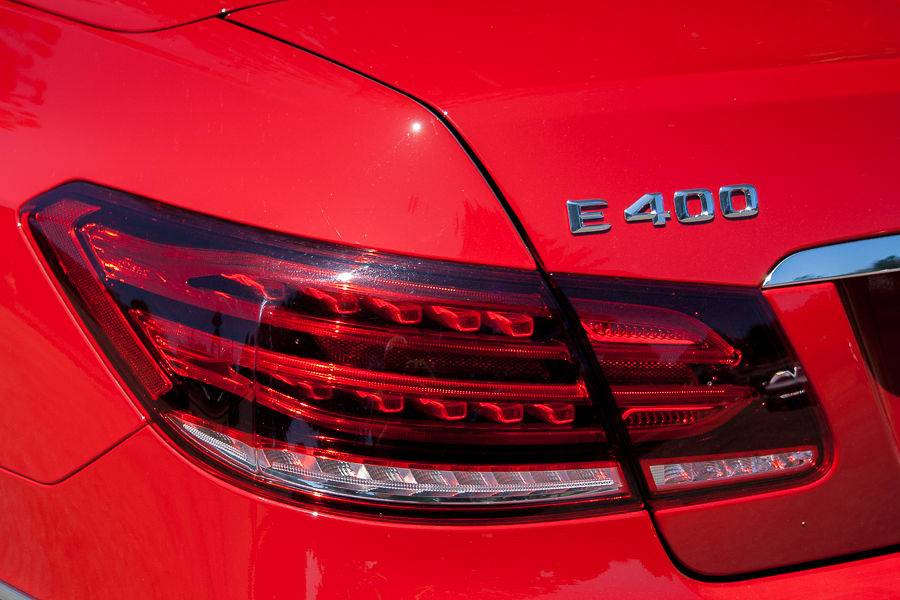 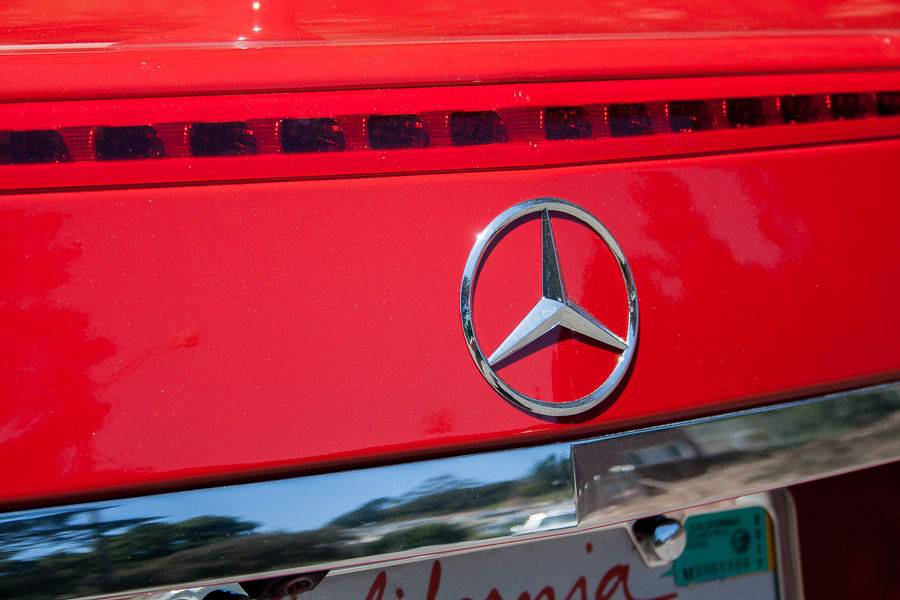 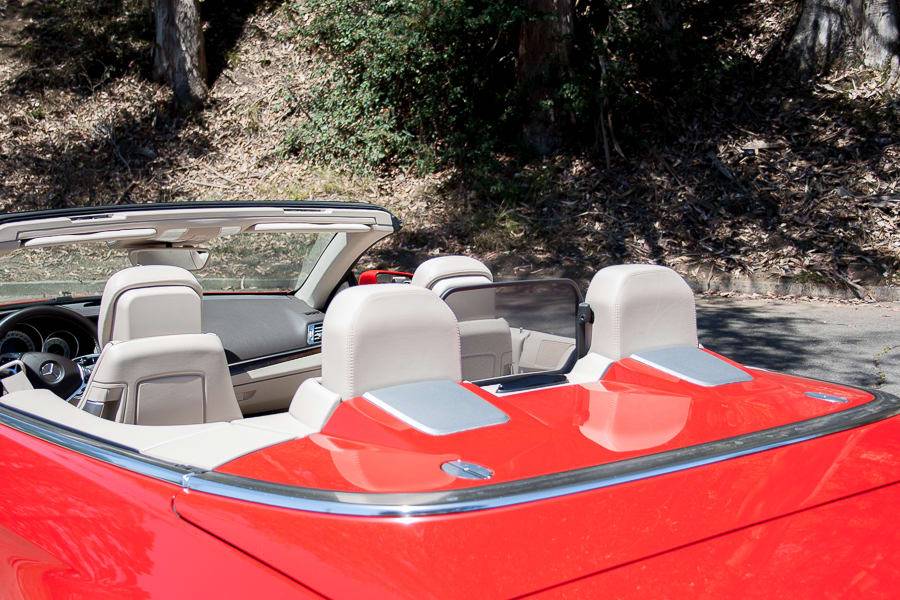 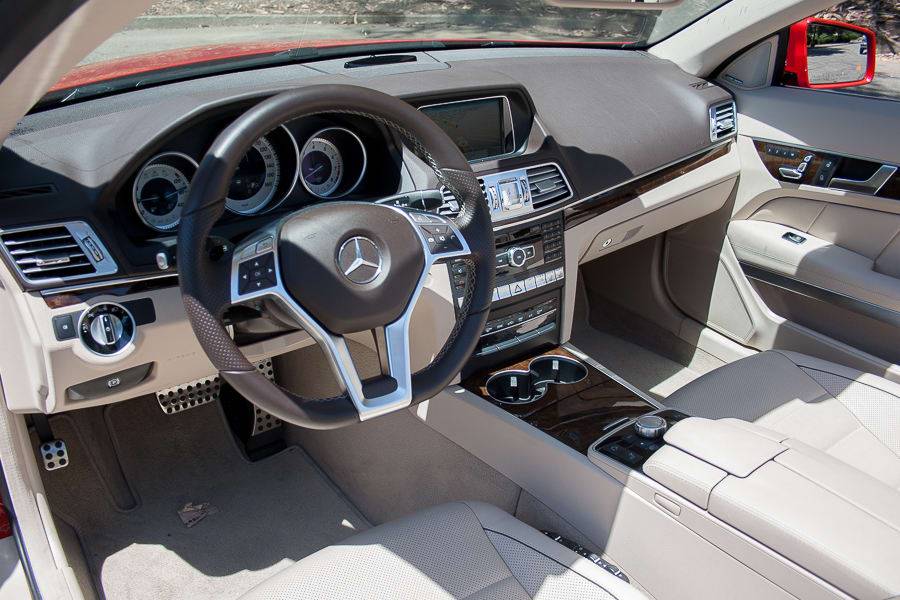 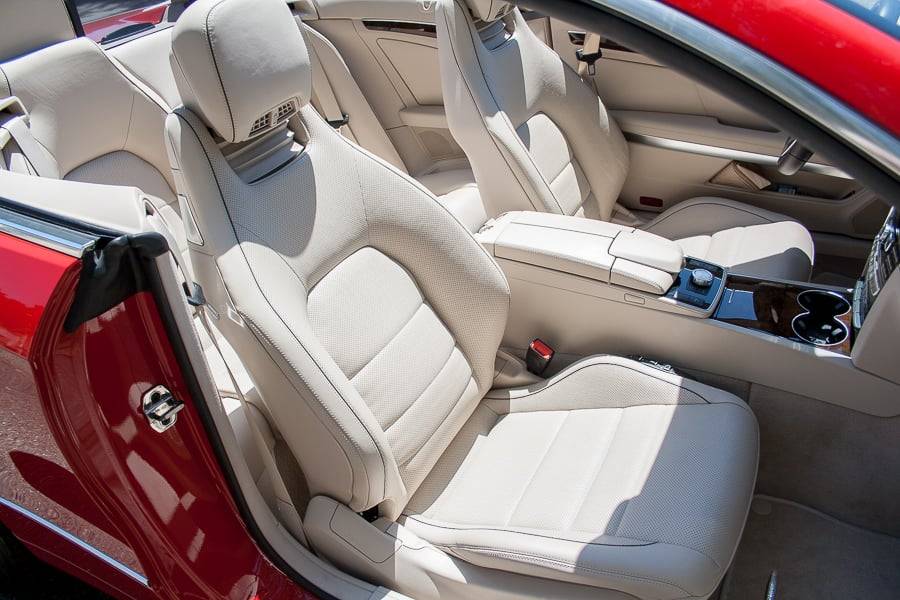 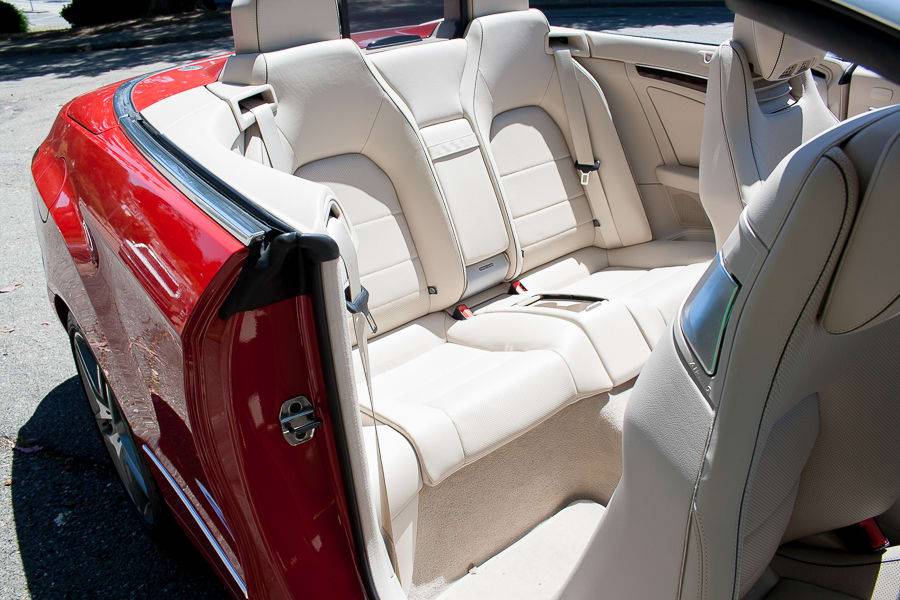 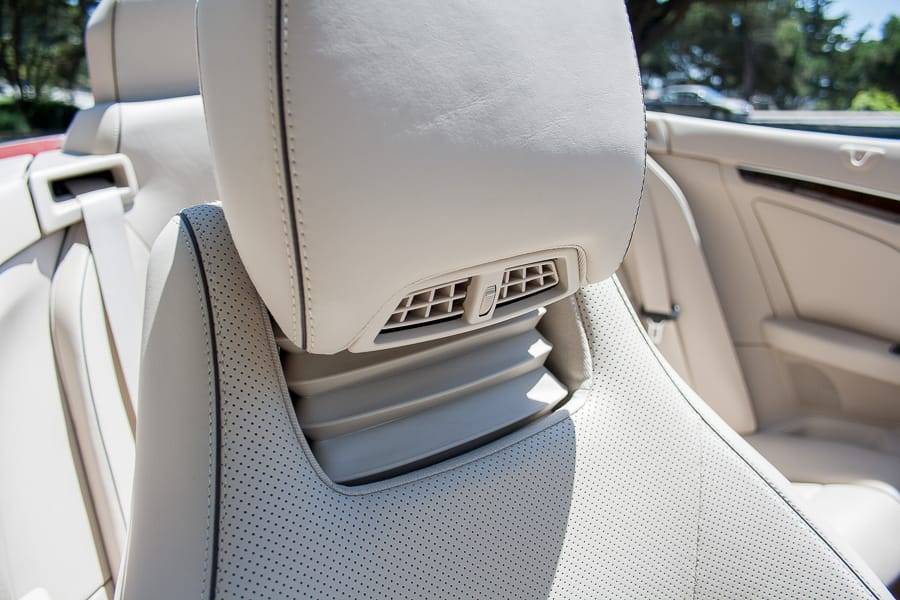 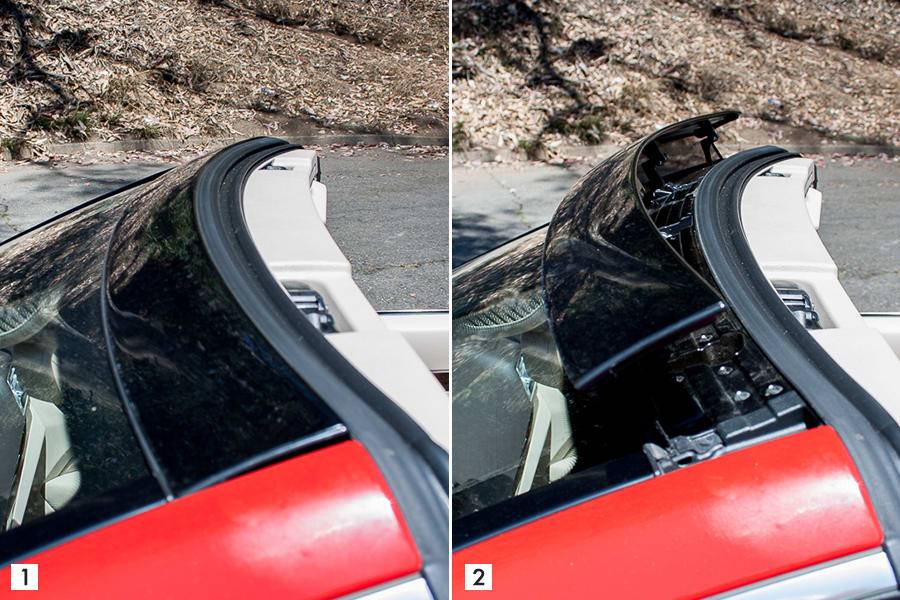 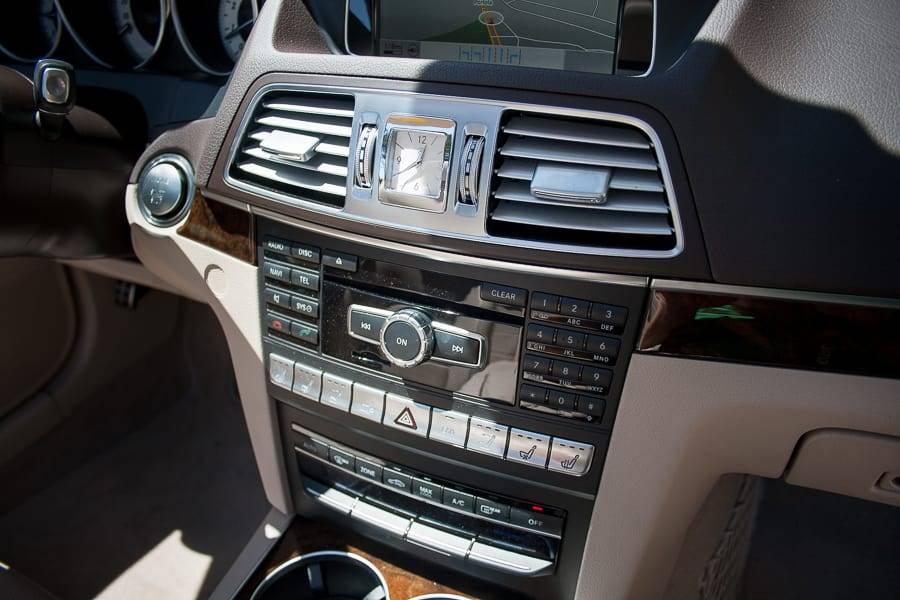 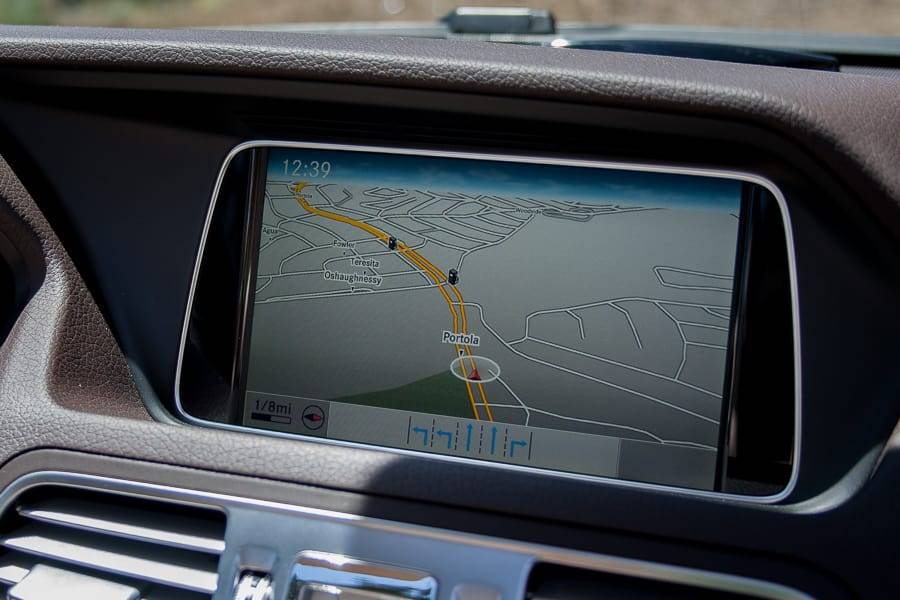 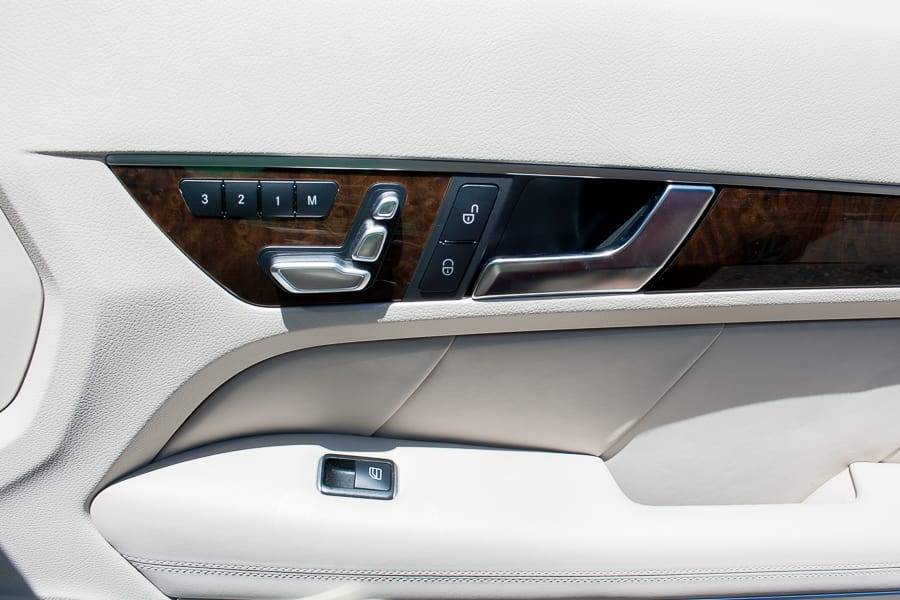 The Verdict: The Mercedes-Benz E400 Cabriolet is a solid, lovely, luxurious four-seat convertible that’s ready for a styling update, but it still satisfies in the ways an expensive convertible should.

Versus the Competition: There’s only one other four-seat midsize luxury convertible, the BMW 640i, and while it’s been redesigned more recently, it’s not as well-equipped for the price.

Mercedes-Benz has updated most of its lineup in the past few years, but one of the few holdouts of the brand’s older style remains untouched. The E-Class is the company’s midsize offering, and it comes in a variety of styles — from a diesel sedan or fire-breathing, twin-turbocharged wagon to the style reviewed here: a slick, two-door, soft-top convertible.

For 2015, the E-Class has gotten a new engine: a twin-turbocharged 3.0-liter V-6 that is now the base engine in the coupe and convertible. Those models have been bumped up to E400 status, while the base sedans — with their naturally aspirated 3.5-liter V-6 — remain E350s. Compare 2015 and 2014 models here.

With a new E-Class hopefully arriving soon, we took a spin in the latest E400 Cabriolet with the new turbocharged V-6 and Mercedes’ AirScarf system. Is the new powertrain enough to keep the E400 Cabriolet interesting until the next generation arrives?

Exterior & Styling
The E-Class last got a styling update in 2013, but it hasn’t yet adopted the swoopy, curvaceous styling that’s appeared on every other Mercedes-Benz model in the past couple of years, like the CLA-Class, C-Class and S-Class. It still looks good, though, with sweeping lines and aggressive headlamps — and it looks especially good with the top down, thanks to a hard tonneau cover that fits over the folded roof.

Unlike some other luxury marques, there’s no mistaking this car for any other brand’s; it conveys status and stately exclusivity, even in my test car’s bright red paint. The E400 Cabrio looks good with the top up, too, thanks to a pillarless door that creates one big window from the windshield to the rear glass. The next-generation model will likely toe the line with Mercedes’ new look, but you can’t go wrong with the conservative style of the current car.

How It Drives
The new 329-horsepower, twin-turbocharged V-6 engine is a sweet motor — strong yet docile in around-town driving, explosively powerful on demand. Plant your foot and the E400 jumps with surprising responsiveness, roaring onto highway on-ramps or streaking away from stoplights. Upgrading to the V-8 in the E550 Cabrio seems like a waste of money just to get a V-8 rumble; the twin-turbo V-6 is plenty of motor for this car. It’s mated to Mercedes’ seven-speed automatic transmission, a smooth-shifting unit that always seems to have the V-6 in the right output for the situation. If it doesn’t, the shift action is quick enough that getting the V-6 ready for action is a simple matter: Press your right foot down until you feel the pedal click, and the transmission forces a downshift. It’s very useful if you want speed right now.

The E400’s handling is neutral, with a bias toward comfort over sport. Steering feel is adequate but not super-sensitive, and braking is firm but not overly confidence-inspiring. Let’s be honest: The Cabriolet’s mission in life is to be an expensive, luxurious, Southern California-lifestyle mall cruiser, not a back-road barnstormer. It succeeds wholeheartedly in this role, with calm road manners, excellent ride quality and more than enough power and speed to satisfy any driver.

Top up, it’s a quiet, sedate luxury coupe. Top down, it’s an open-air grand tourer with room for four. That’s something of a rarity in the luxury world. The BMW 640i convertible is the E400’s only real competition, and it costs considerably more while delivering a similar experience.

The E400’s fuel economy is rated 20/29/24 mpg city/highway/combined, and my week of driving with the top down netted about 23 mpg. (Lowering the top on any convertible will negatively affect fuel economy by disrupting the aerodynamics, which is one reason you don’t see any hybrid convertibles.)

Opting for the larger E550 Cabrio’s turbocharged V-8 engine will mean a drop in fuel economy to 17/26/20 mpg. As stated before, though, choosing the V-8 is really just for image purposes, not substantially better performance. The BMW 640i convertible is rated 20/31/24 mpg.

Interior
Unlike some more recently updated models, like the C-Class and S-Class, the E-Class retains the angular, blocky styling of past Mercedes. It’s still attractive, well-built, nicely screwed together and made of top-quality materials, but it feels … not exactly old. We’ll call it “classic.” The E400 feels tighter than the 640i both up front and in back despite plenty of hip and headroom for all occupants.

Visibility out front and to the sides is excellent thanks to the long, pillarless side windows, but seeing out back is difficult due to the standard retractable wind blocker between the backseat head restraints. It automatically rises when the top goes down but never fully retracts when the top is up. The perforated portion, which is intended to be see-through, is more opaque than I’m comfortable with. It partially obscures the view to the rear whether the top is up or down.

The available AirScarf system puts small heated air vents at neck level in the front seatbacks. Combined with the aforementioned rear air blocker and a special lip that rises out of the top of the windshield, it provides for an astonishingly comfortable top-down motoring experience in chillier weather. It’s especially useful in climates that see dramatic weather changes within just a few miles, where one side of the city can be cold and blustery while the other is clear and sweltering.

The seats are highly adjustable up front and excellently supportive, as I found after several days of long touring. Backseat legroom is a little tight versus the E-Class sedan thanks to the space eaten up by the folding top’s storage area, but if front occupants are willing to give up a bit of legroom, the E400 Cabrio can accommodate four full-sized adults — something most luxury convertibles have a hard time doing.

By comparison, the 640i convertible’s interior looks newer and fresher, though no more luxurious than the E400. It’s a couple of inches wider in the passenger compartment than the E400, as well. Front and rear legroom is nearly identical, but the 640i has a bit more headroom.

Ergonomics & Electronics
The electronic systems in the E400 are familiar by now, with a number of the expected Mercedes-Benz safety gadgets still available, like an attention monitor, lane keep assist, parking sensors and more. The controls feel as solid as Mercedes switches and buttons ever have, and the rotary knob controller for the Comand multimedia screen gets more intuitive every time I use it. Having driven newer Mercedes, I can say there doesn’t seem to be anything missing in the E400’s retinue of electronic entertainment and safety offerings, just that they aren’t presented in as modern a setting as those in the rest of the showroom.

Cargo & Storage
Being a convertible, the E400 Cabrio’s cargo space is limited. A fold-down partition has to be in the down position in the trunk to lower the top, as the top is stored in part of the trunk. Even with the top down, however, there’s still enough room for two good-sized roll-aboard suitcases and some softer duffels. Top-up, the trunk can accommodate full-sized suitcases without a problem. Total available trunk space is 11.5 cubic feet, dropping to 8.8 cubic feet when the top is down. The longer, wider BMW 640i convertible has 12.4 cubic feet of space, but faces the same restriction when its top is lowered; its cargo space drops to just 10.6 cubic feet.

Safety
The convertible version of the E-Class has not been crash-tested, and it’s not likely to rate the same as the sedan, given the structural changes required to chop off the top an automobile. Having established that, the sedan earned a four-star overall rating from the National Highway Traffic Safety Administration, and ratings of good in every test from the Insurance Institute for Highway Safety. See the crash-test ratings for the E-Class sedan here. The Cabrio doesn’t come with much in the way of standard active safety features; nearly everything is part of an option package, including lane keep assist, park assist sensors, a backup camera, a surround-view camera, distance keeping cruise control with automatic braking, forward collision warning, attention assist and blind spot warning sensors. See what comes standard on the E400 here.

Value in Its Class
A base 2015 E400 Cabriolet starts at $62,275 including a destination fee, but if you want any kind of advanced safety content you’ll need to start ticking off option packages. My test car was fully loaded and came to $74,760, including items like the Lane Tracking Package, the Parking Assist Package, the AMG Sport Package, LED headlights and much more. If you want to bump up to a V-8 E550 Cabriolet, that version starts at $68,675. Loaded up it can top $84,600. Build one your way here.

Given Jaguar built just 50 XK convertibles for the 2015 model year, no other luxury automaker offers a four-passenger convertible in this size — the Audi A5, Infiniti Q50 and Lexus IS are all a size smaller in the compact class, making them more a match for Mercedes’ C-Class and BMW’s 4 Series. See how the E400 Cabrio stacks up against the 640i convertible here.