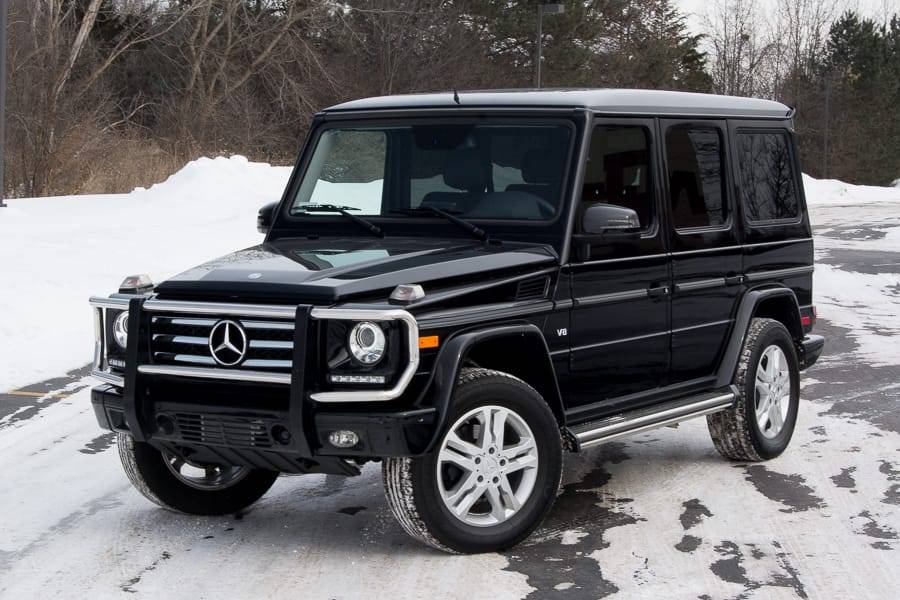 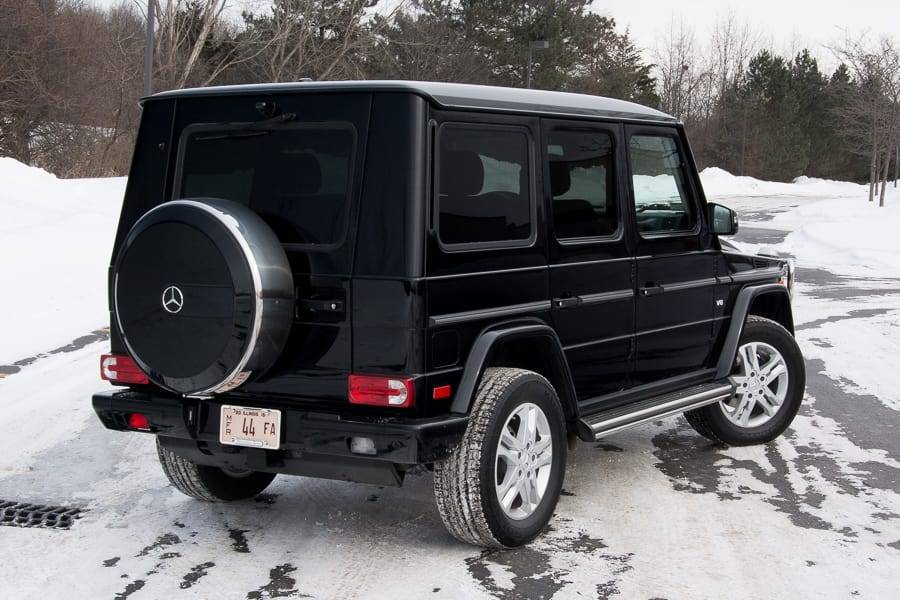 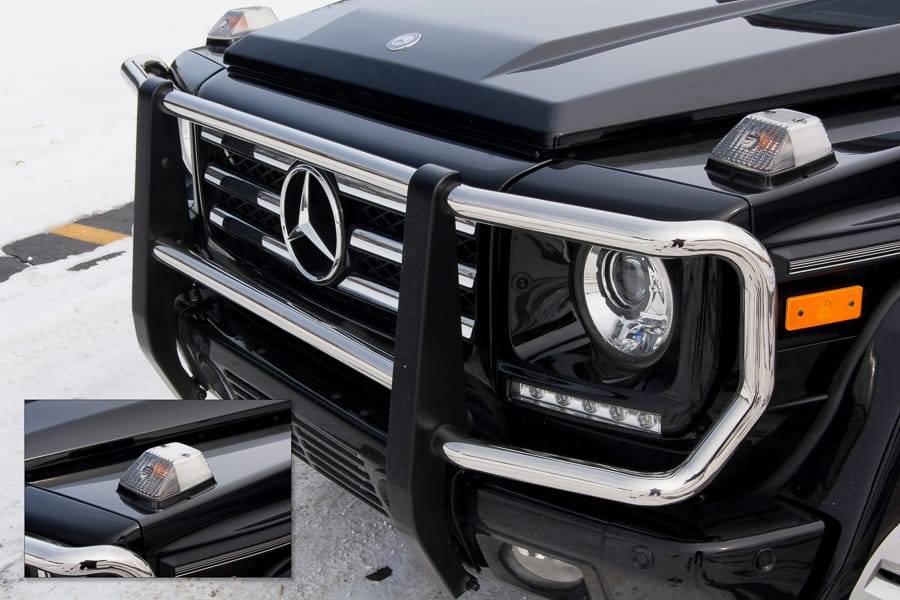 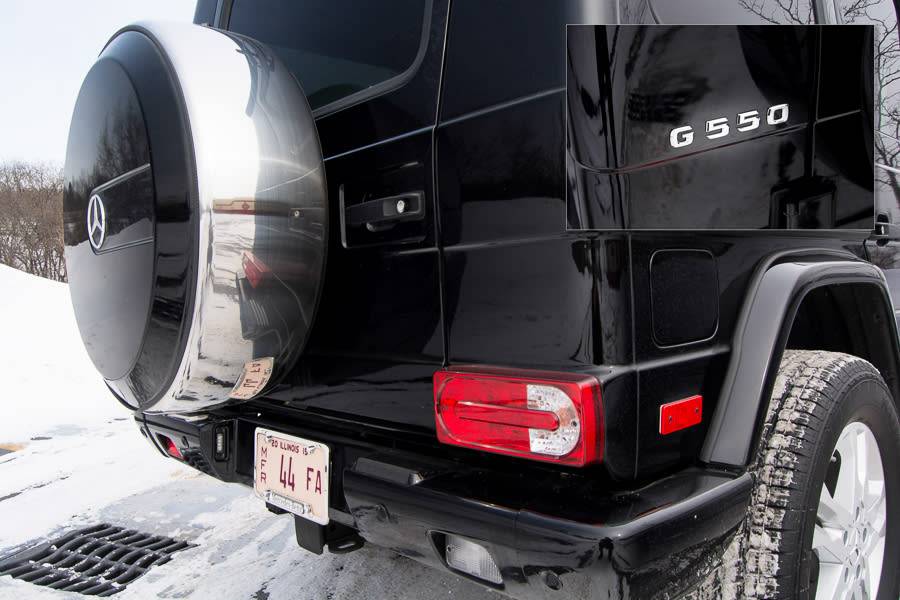 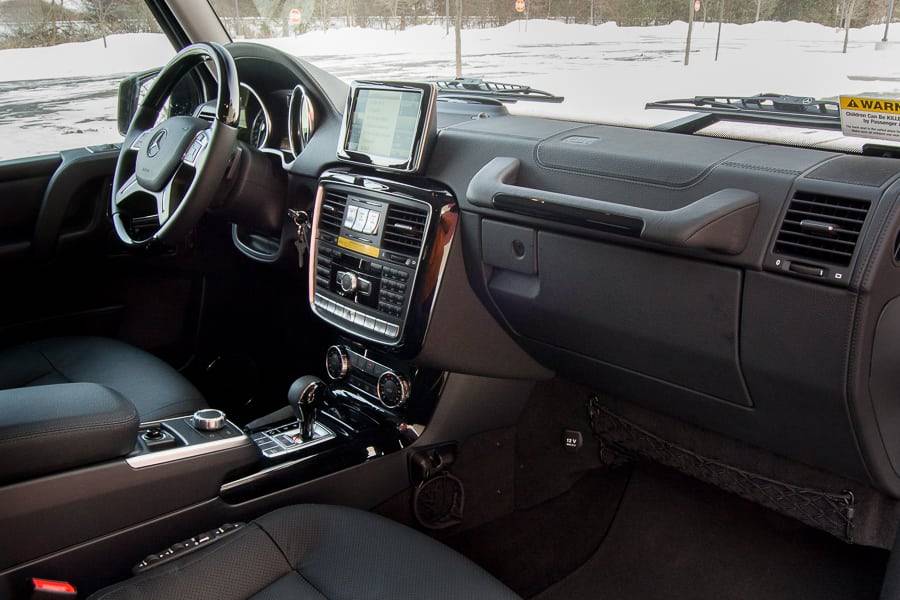 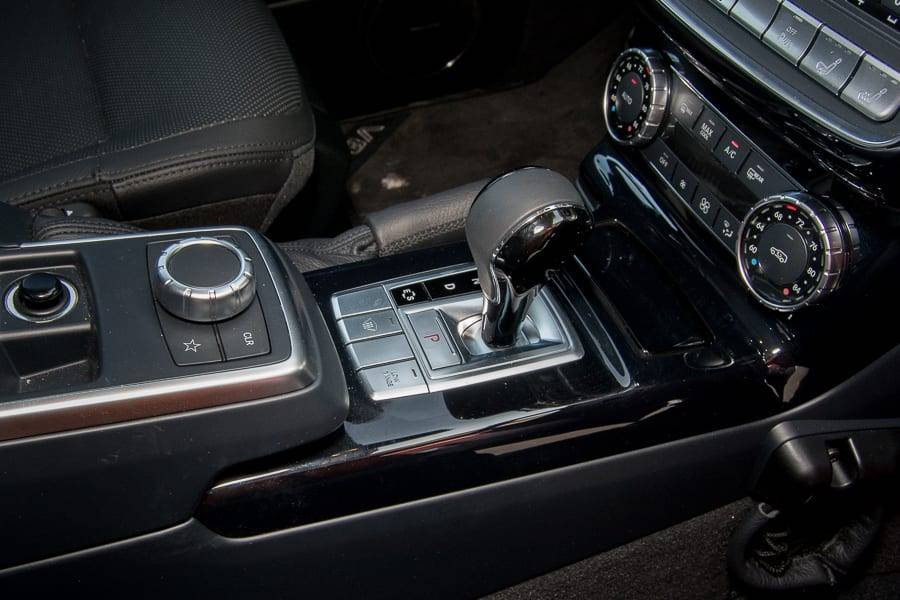 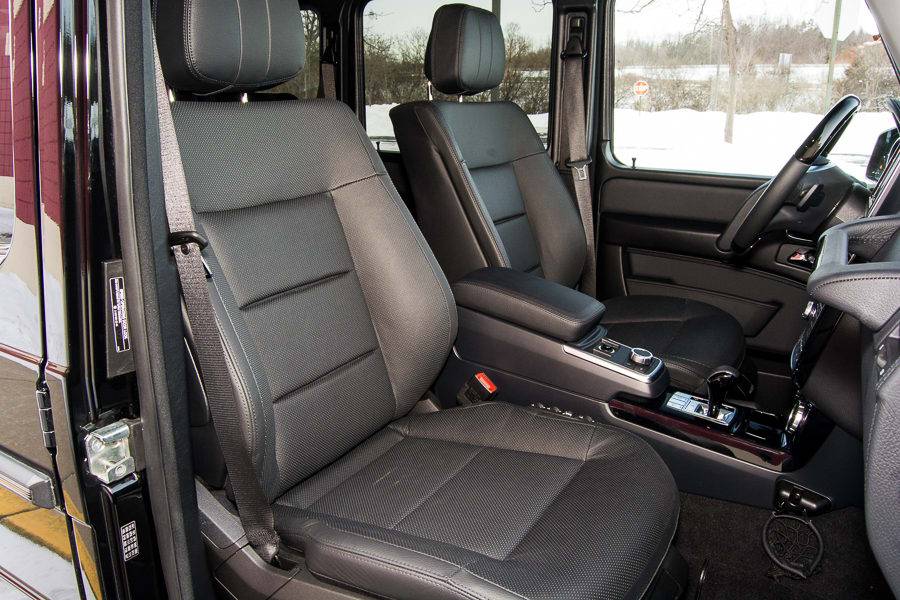 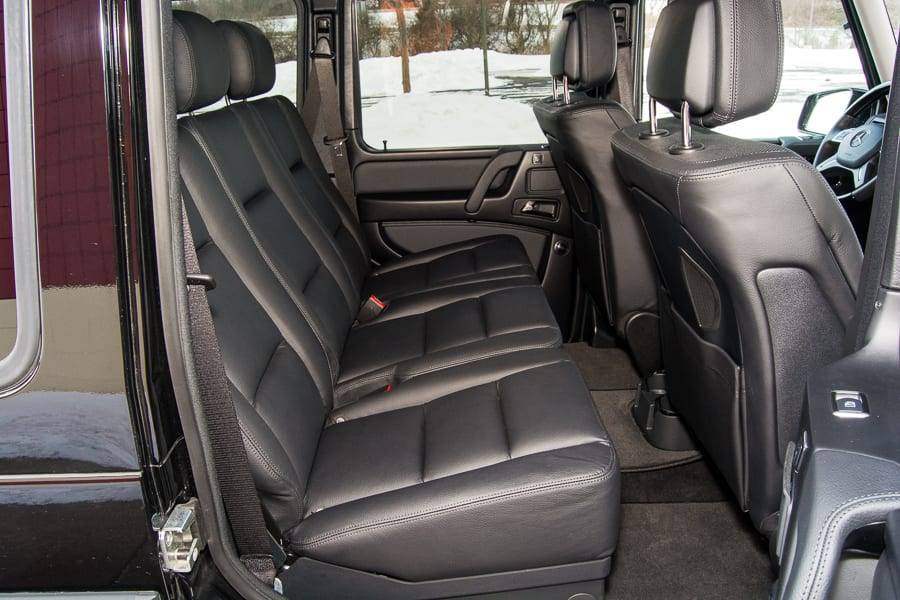 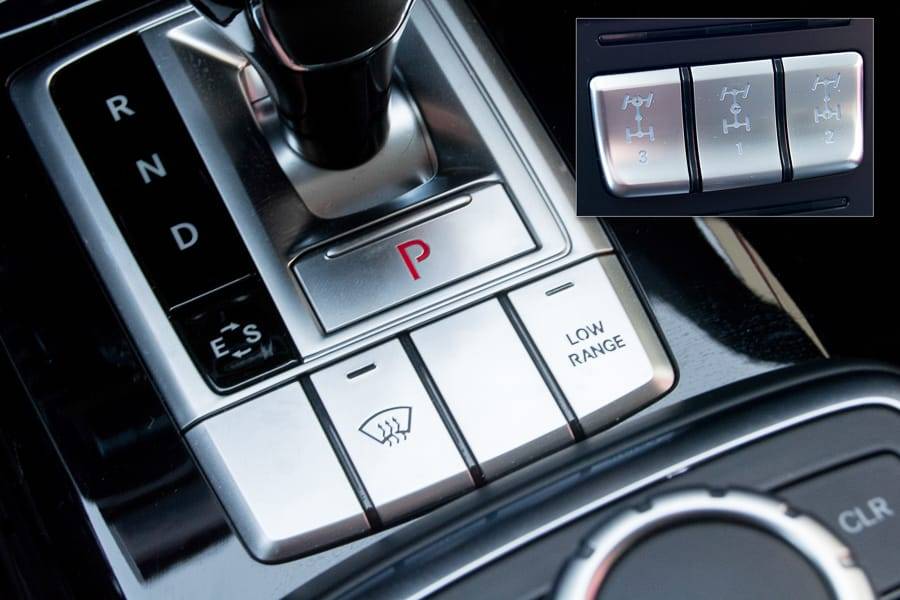 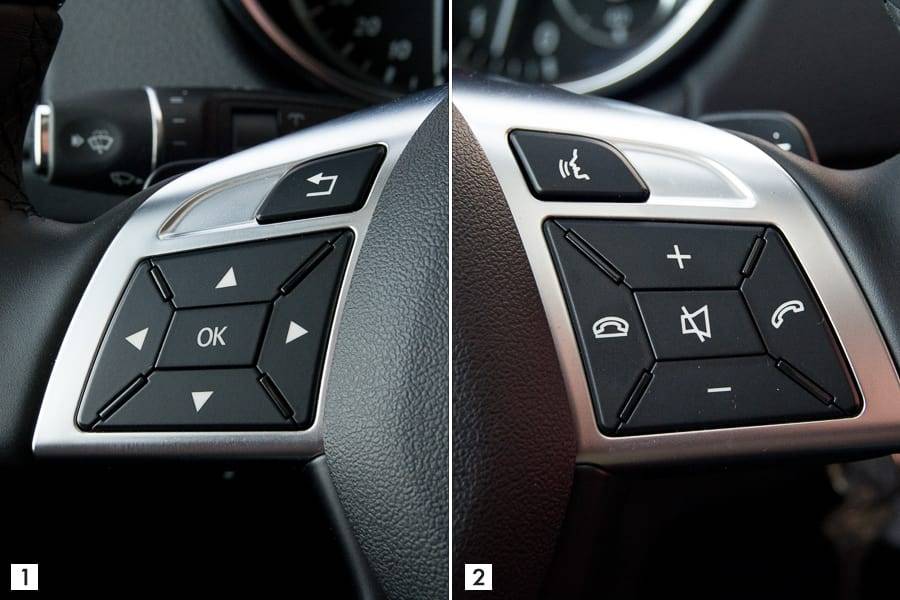 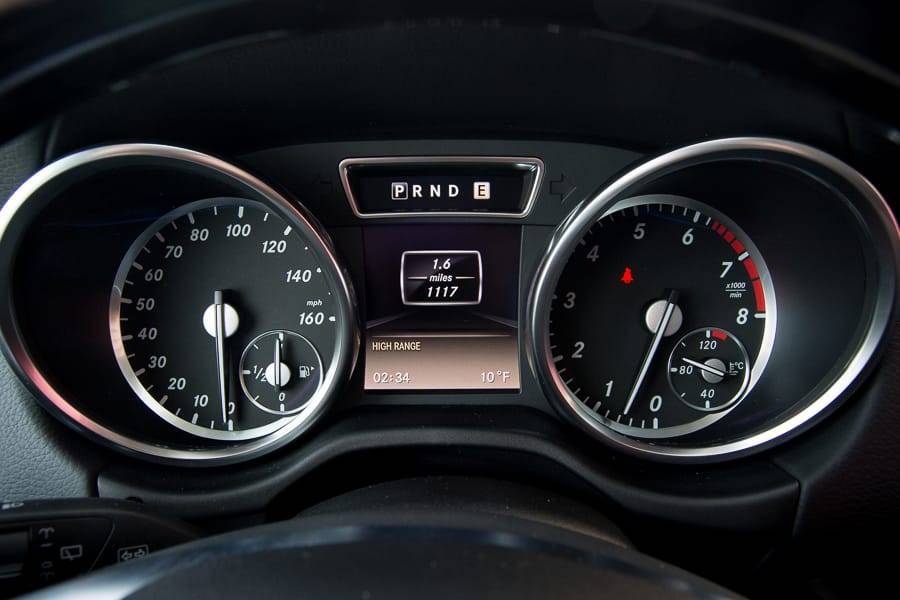 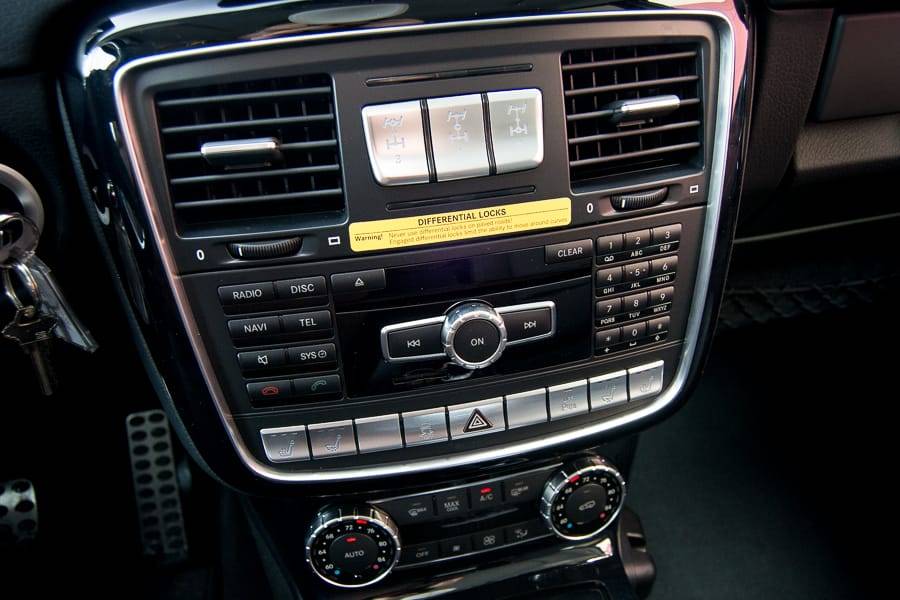 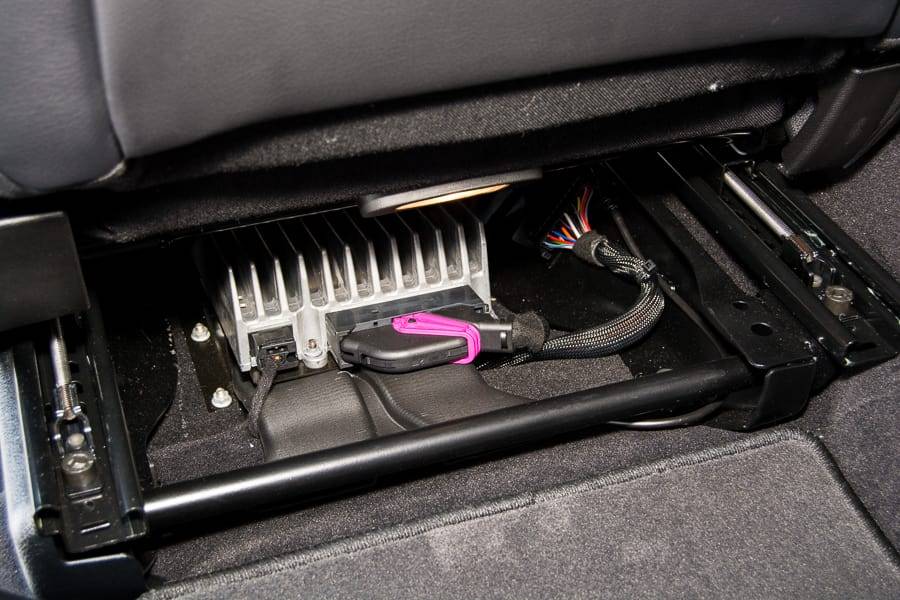 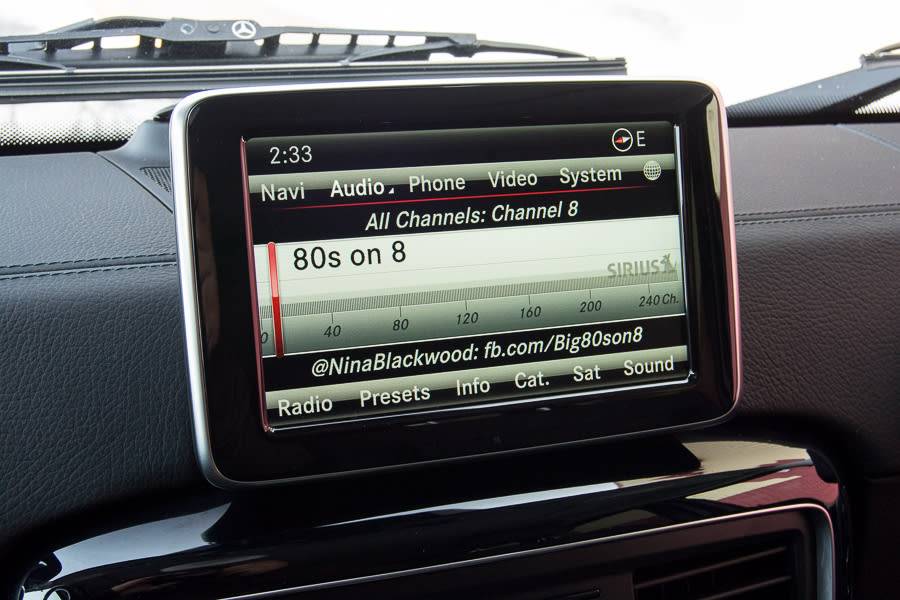 Mercedes-Benz builds SUVs that are more comfortable, quieter, better-handling, more spacious, more efficient, lighter, quicker and better than the 2015 Mercedes-Benz G-Class G 550 — but not a single one that’s cooler.

There are certain vehicles that still exist simply because they’re ridiculous enough that people pay huge sums of money for them. Hummers were like that, big Bentley sedans are like that, anything by Lamborghini is like that. But the Mercedes-Benz G-Class is in a class by itself. It traces its origin to 1979, when it was born as the Geländewagen European military vehicle, and has soldiered on into 2015 with what appear to be minimal modifications.

Hand-built under contract for Mercedes at a plant in Graz, Austria, the G550 (or “G-wagen,” as it’s often called) is the very definition of an anachronism: It’s heavy, square and primitive by modern SUV standards, yet it remains undeniably cool and characteristically unchanged (compare the 2014 and 2015 models here). Despite extraordinary mechanical systems that deliver unmatched off-road prowess, you’re far more likely to see a Mercedes-Benz G-Class prowling around Mountain View, Calif., than on a mountain pass. So why are these expensive cinder blocks all the rage among rich socialites? I spent a week with one to find out.

Exterior & Styling
There’s a fine line between dated and classic when it comes to styling, and most people agree that the Mercedes-Benz G-Class stays on the classic side of that line. This is a look that hasn’t changed since the truck was introduced more than 30 years ago, but it hasn’t needed to; the Mercedes-Benz G-Class is more popular now than ever. There isn’t a curved surface to be found — not even any slope to the cabin windows. This shape maximizes interior space but creates some interesting reflections in the side windows when driving at night.

A few modern trim touches have been added over the years, such as bi-xenon headlamps and better window and door seals, but there’s no mistaking the G-Class for anything else on the road. Throwback details abound: To open the door, your thumb must push a button in the rigid handle. Closing those doors requires a forceful push, and a gunshot-like “CLACK!” is your reward. When the doors lock and unlock, the sound is about what you’d imagine a submarine’s hatch sounds like when it locks. The Mercedes-Benz G-wagen looks and sounds like a tank; it takes no stretch of the imagination to picture the G-Class on a battlefield.

How It Drives
Squeeze yourself into the driver’s seat (it’s not a spacious interior) and twist the ignition, and you’ll be rewarded not with the diesel clatter of a military-spec engine, but the outrageous roar and rumble of Mercedes’ naturally aspirated 5.5-liter V-8 engine. It’s a huge motor for a vehicle this size, making 382 horsepower and delivering it to all four wheels of this G-Class through a seven-speed automatic transmission and permanent all-wheel drive.

The big engine allows the G550 to do a zero-to-60 mph run in just 6 seconds (per manufacturer data). That’s a highly respectable time for such a heavy, throwback truck, and it does it with a roar that wouldn’t sound out of place in an AMG sports car. The exhaust consists of dual short pipes that exit underneath the truck, just in front of the rear alloy wheels. You’ll find yourself dipping into the throttle just to hear the amazing sound it makes.

The G550 is a lot of fun to drive, but that doesn’t mean it’s very good to drive. You have to approach the G-Class like it’s a brand-new vintage car, yet it’s an off-road truck, barely civilized for on-road duties. It features two solid axles, three electronic locking differentials and a two-speed transfer case. It has the ability to scale terrain you wouldn’t want to climb over on foot. It’s a phenomenal performer in the dirt, mud, snow and rocks, but put it in stop-go traffic on the pavement and it’s out of its element.

The G550’s steering is what auto journalists call “slow,” meaning it takes a lot of turns of the wheel to get the truck to change direction. Ride quality is what you’d expect in an old-style, solid-axle truck — it bounces, floats and rolls like the top-heavy SUV it is. Forget high-speed maneuvers — even quick highway lane changes can set the G550’s body bobbing and weaving. In straight-line cruising on smooth pavement, it’s not so bad, as Mercedes-Benz has tuned it to deliver decent comfort. Road and wind noise is pronounced — which, frankly, is to be expected; you are splitting the air in what, aerodynamically, amounts to a rolling shoebox with a big chrome tube rack on the front. It has none of the isolation, refinement or poise of a Land Rover Range Rover, but what it lacks in on-road luxury it makes up for with in-your-face on-road presence. Your average Land Rover doesn’t get you noticed, but the G-wagen announces your arrival like a landing mortar shell.

The G550’s combination of a big engine, slab-sided styling and portly mass combine to give it an EPA fuel economy rating of 12/15/13 mpg city/highway/combined, which isn’t going to win you any Sierra Club awards. My week of testing, which included a fair amount of highway driving, didn’t even reach those numbers; I averaged 11.3 mpg in what was admittedly the coldest week of the winter of 2014/2015.

Interior
Just like the exterior, the G550’s interior is best described as retro. An update in 2012 brought a modernized dashboard with an integrated Mbrace multimedia system, new seats, gauges and updated onboard electronics. The most striking aspect of the interior, however, is the view out it. In the G550, you sit up high in a very narrow, upright cabin with big windows, and its visibility may be the best of any car I’ve ever been in. The hood is very low and short, the corners are easily visible and there are no overhangs in any direction to trip you up. The view in any direction is outstanding, with one exception: The high seating position can hide stoplights behind the roof if you stop too close to them.

The front seats are decently big and comfortable, but they don’t slide back far enough for long-legged drivers. The rear seats are awful, sitting even higher than the front seats and featuring scant legroom. On paper, the G550 has significantly more front and rear legroom than a Jeep Wrangler Unlimited, but it certainly doesn’t feel like it. The overall interior layout feels very similar to that Jeep, albeit narrower by a considerable amount. It doesn’t hold a candle to the posh surroundings in any Range Rover, nor to those in an LX 570 or Porsche Cayenne. Unless you’re riding up front, the G550 just isn’t very pleasant. But you’re going to look so cool while you’re in it you’re just not going to care.

Ergonomics & Electronics
The placement of switches and gauges is equally anachronistic. The three most easily reachable switches residing high in the dash lock the front, center and rear differentials — meaning they’re buttons that the vast majority of rich suburbanite G-wagen drivers are likely to never touch even once. Climate control switches are standard Mercedes-Benz types but are located so low on the center console that you have to stretch and take your eyes off the road to reach them. The Comand multimedia controller is at least in a reasonable position in front of the armrest, where it controls the high-mounted display screen with ease.

The odd interior trim setup, though, can be represented with one simple example: The gauges, while large and easily legible, are obscured by a steering wheel that doesn’t adjust high enough for anyone over 5-foot-9 to see the top half of the numbers. From about 50 to 100 mph, you’ll have to rely on the selectable digital speedometer that’s duplicated between the gauges, as the traditional one is blocked by the wheel.

The G-Class comes with some trim quirks. The second row split-bench folds in an old-school way, with the lower cushion flipping forward and the seatbacks then folding down. In order to do this, the front seats need to be moved forward considerably and then cannot be moved all the way back — or anywhere close to all the way back, making for an uncomfortable driving position.

One of the benefits of having a truck with a big V-8 and a rugged frame is the ability to tow things with it. The G550 can tow up to 7,000 pounds, which is a competitive number. The Lexus LX 570 matches the Benz’s rating, but the Porsche Cayenne and Land Rover Range Rover both top it, with a 7,716-pound trailer rating. If you’re looking for real towing power, however, you’ll have to go with a dedicated truck, like a Cadillac Escalade (which can tow 8,300 pounds) or Lincoln Navigator (9,000 pounds).

Safety
The 2015 Mercedes-Benz G550 has not been crash-tested.

In its most recent update, the Mercedes-Benz G-class received some updated safety features, including adaptive cruise control with forward collision warning, and parking sensors front and rear. It features a backup camera, but it’s a simple one: no guidelines appear on screen when you shift into Reverse. Blind spot warning is also standard. See the rest of the G Class’ standard features here.

Value in Its Class
The G550 starts at $116,325, including destination. My test car had no options, but there aren’t many to be had — just extra-cost “designo” paint, interior leather choices in some surprisingly wild colors, a heated steering wheel and a rear-seat entertainment system. If the G550 isn’t quite nuts enough, you can upgrade to a Mercedes-Benz G-class G 63 AMG, which features an AMG turbocharged version of the 5.5-liter engine making 536 hp, as well as suspension and brake upgrades, with the same designo paint and interior options. This Mercedes-AMG version starts at $138,075 and can be optioned up to more than $154,000.

AMG or not, competitors for such a high-dollar luxury SUV status symbol body-types are obvious, starting with the Land Rover Range Rover — perhaps the only other SUV that can do what the Mercedes-Benz G-wagen does off-road and still have comparable status-symbol prestige. But the Range Rover does so on a far more modern platform: an all-aluminum chassis that’s more than 600 pounds lighter than the body-on-frame Mercedes-Benz G-wagen. It also has a much more comfortable, spacious and luxurious interior, plus more options when it comes to powertrain and technology. It’s priced similarly, too, starting at $90,920 for a V-6 HSE version and stretching up to more than $187,000 for a long-wheelbase V-8 model.

The Porsche Cayenne is also a capable off-roader, but to a much lesser extent. It’s also a hot fashion choice. It starts at $62,695 for a diesel V-6 model and stretches up to $114,595 for a Turbo. Like all Porsches, though, it can be optioned up to an insane level of content if you feel the need to spend more than $180,000. The Lexus LX 570 isn’t nearly the status symbol that those other three choices are, but it’s certainly capable, given it’s based off the Toyota Land Cruiser. Strangely, it’s actually more expensive than the Porsche, starting at $84,105, but isn’t quite as advanced technologically as its competitors. Compare all four models here.

The thing to realize about the Mercedes-Benz G-Class, and it’s AMG sibling, is that there are half a dozen better luxury trucks than this one on the market: SUVs that are more comfortable, more efficient and more technology-packed; ones that handle better, that go and stop better — but none that exude the kind of in-your-face swagger and attitude that the Mercedes-Benz G-Class delivers. The fact that you can have a better SUV for a lot less money means that anyone you see driving a G550 has made a very specific decision to do so, logic be damned.