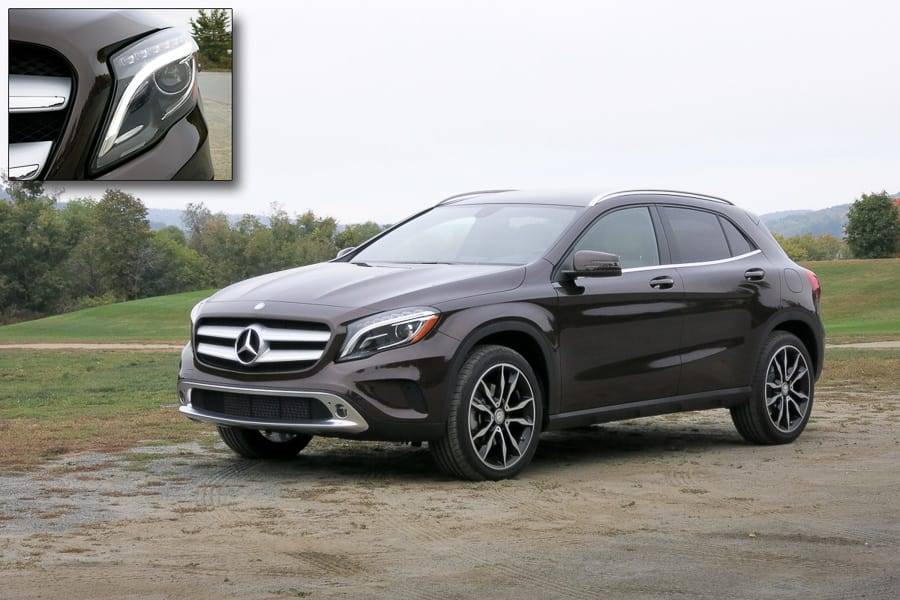 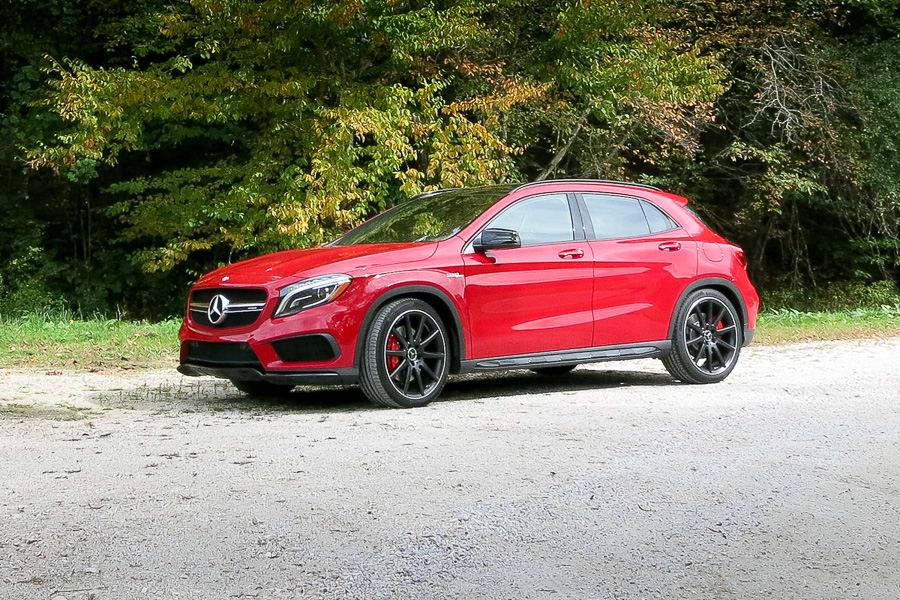 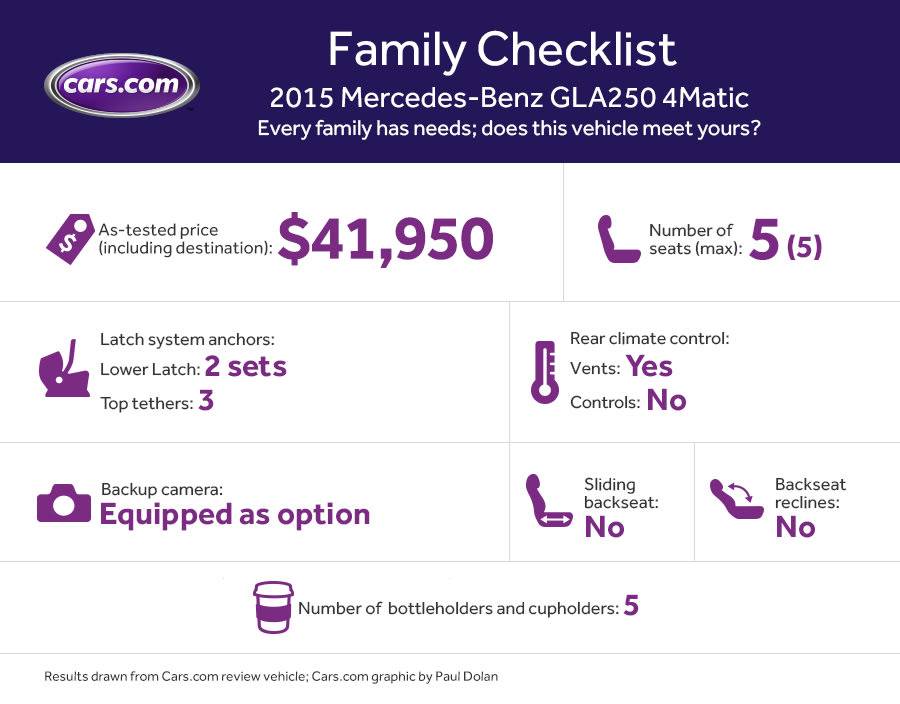 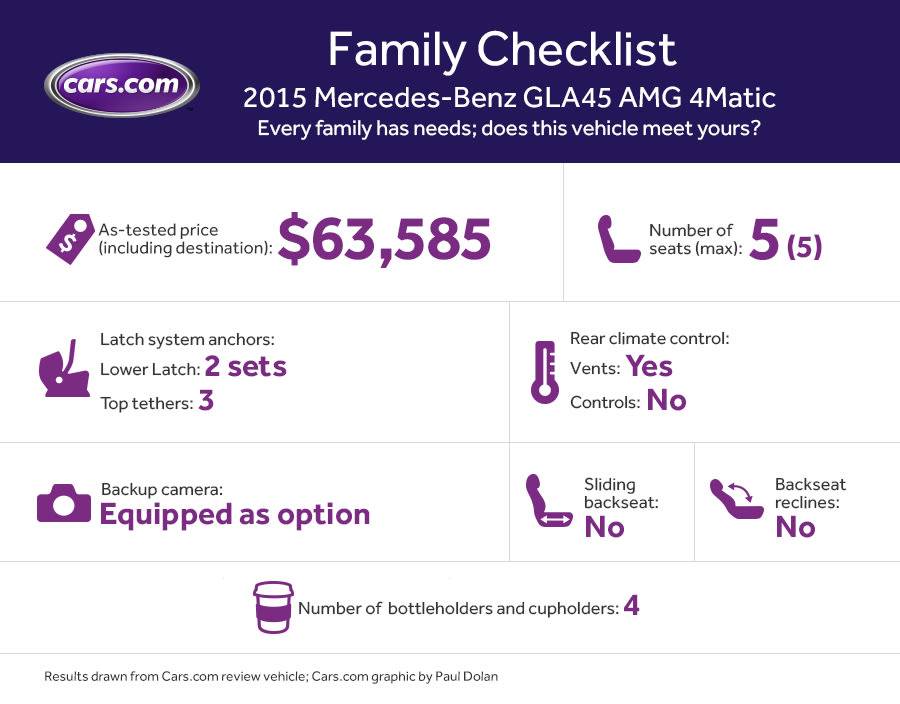 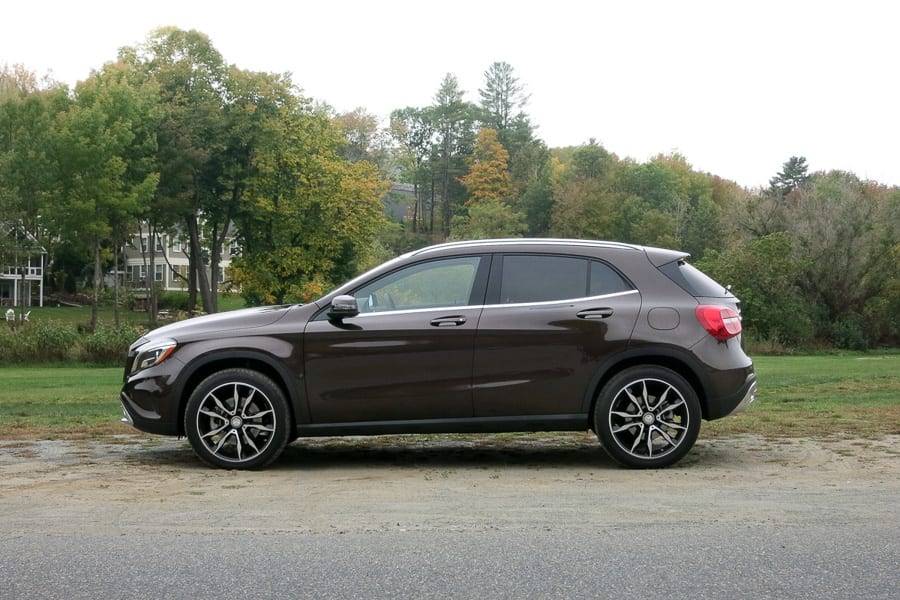 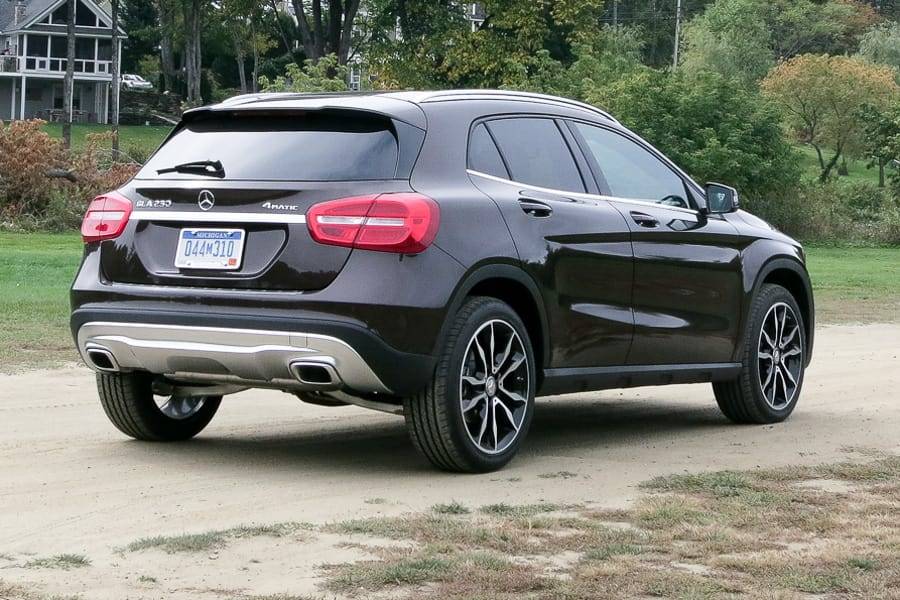 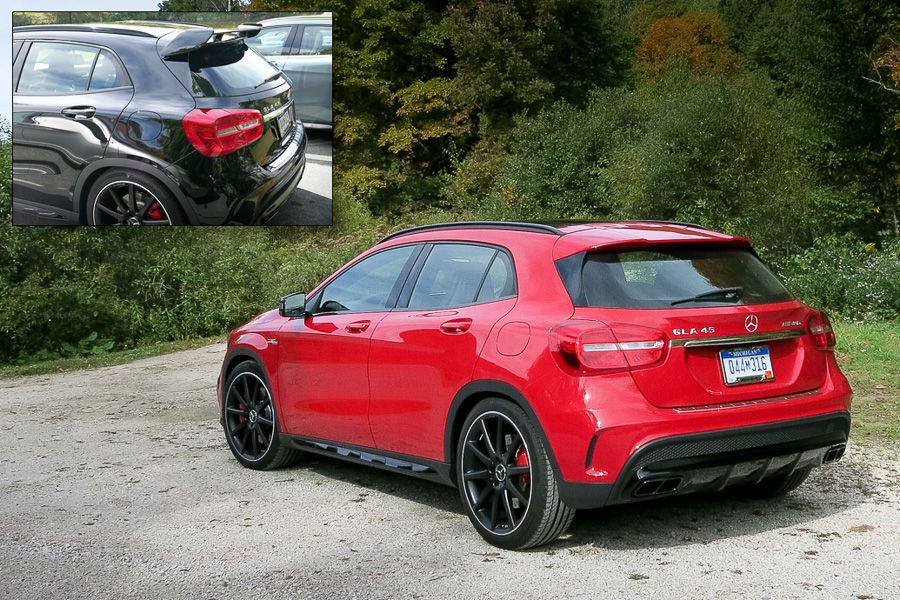 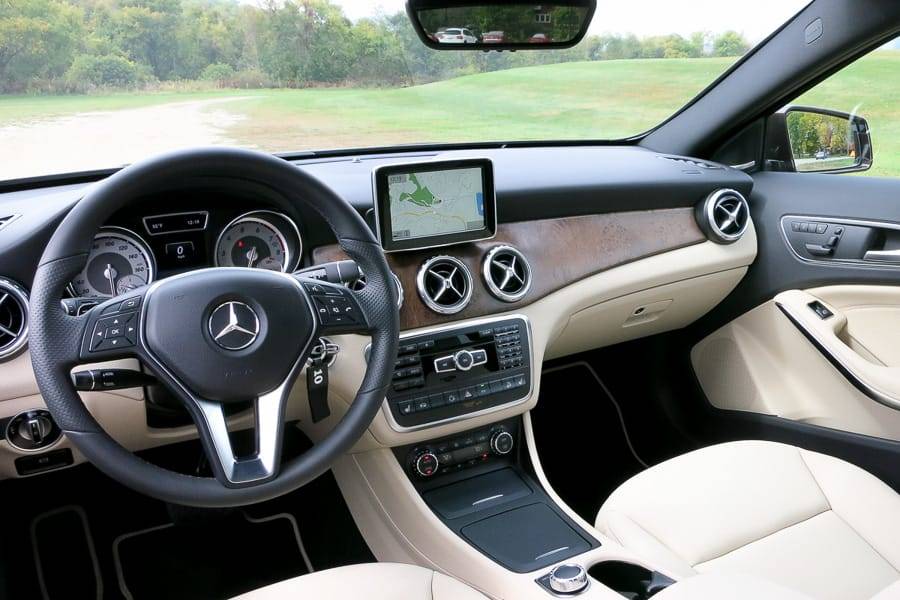 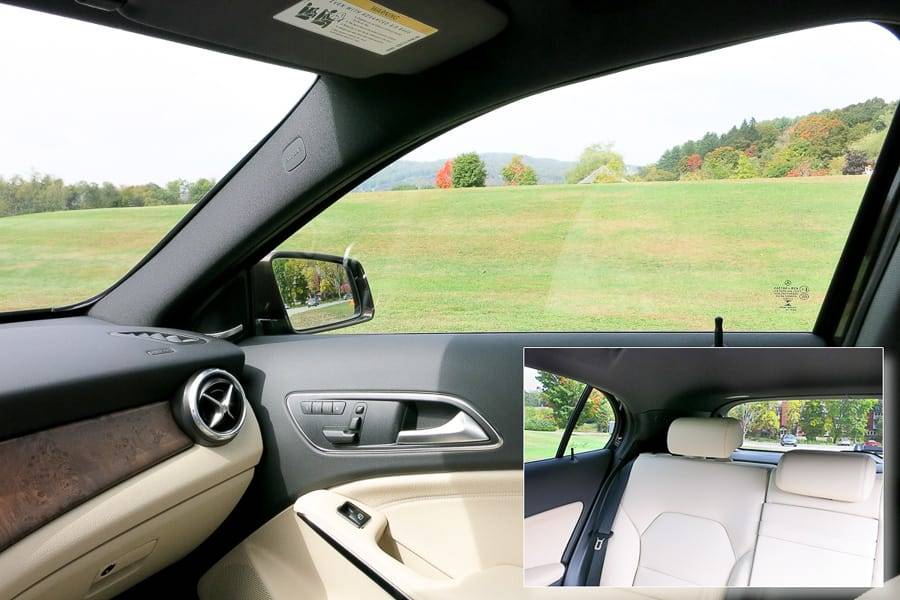 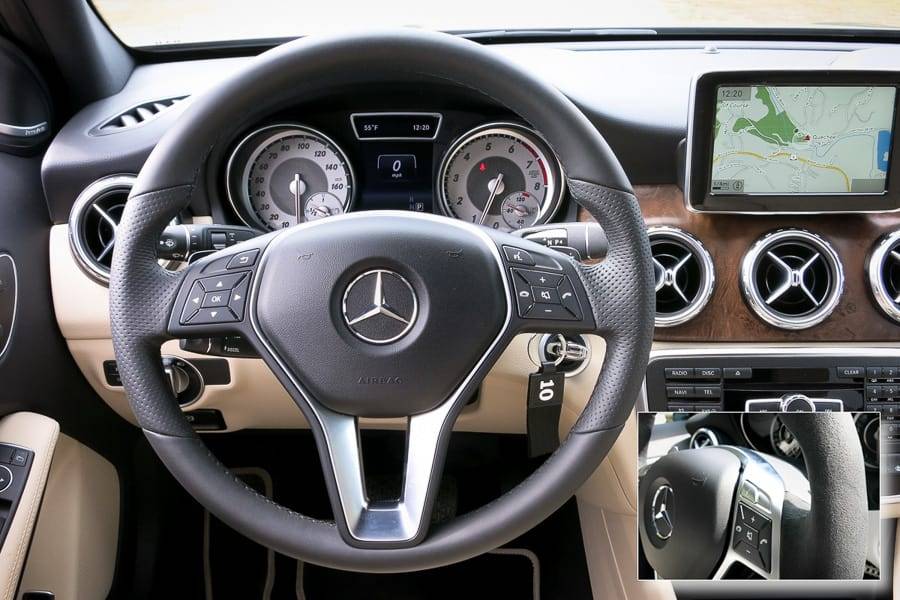 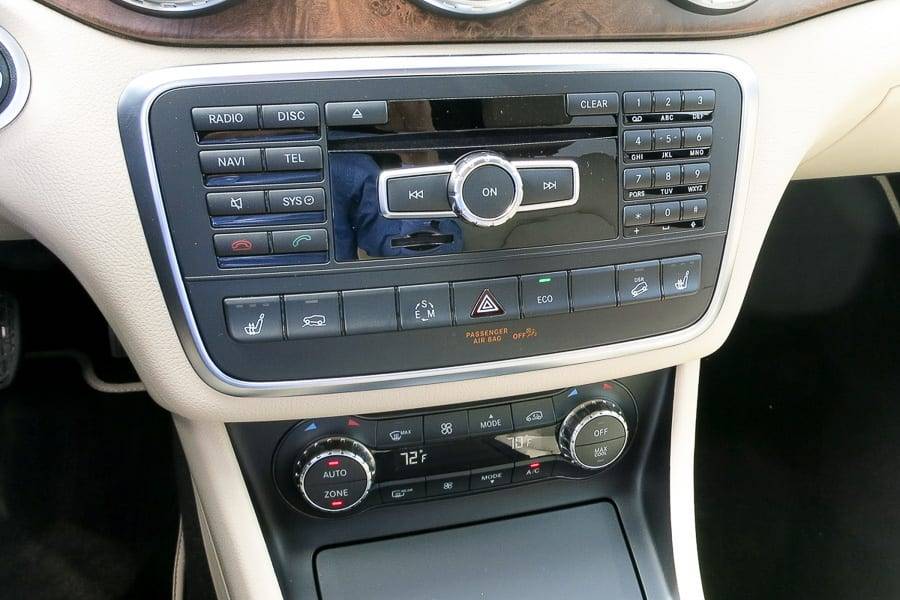 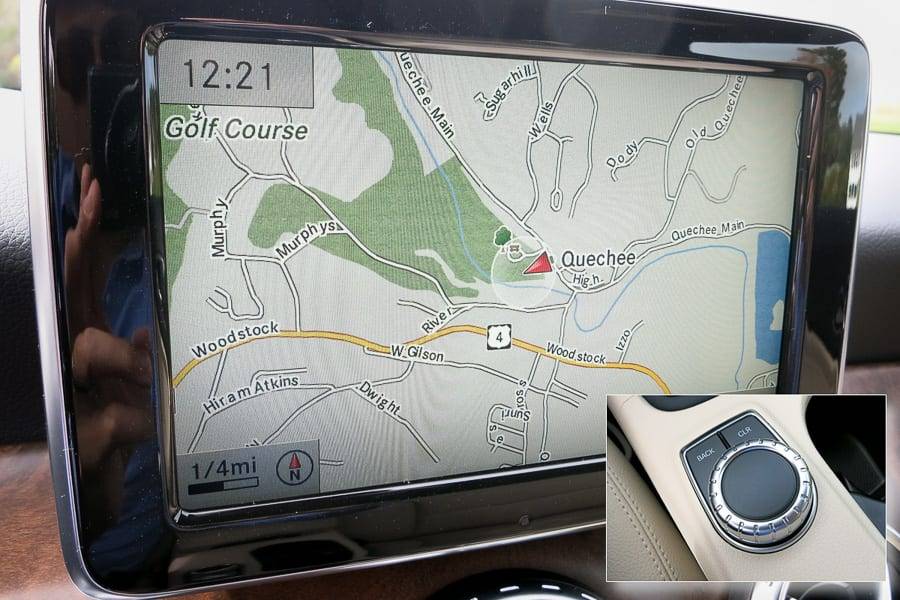 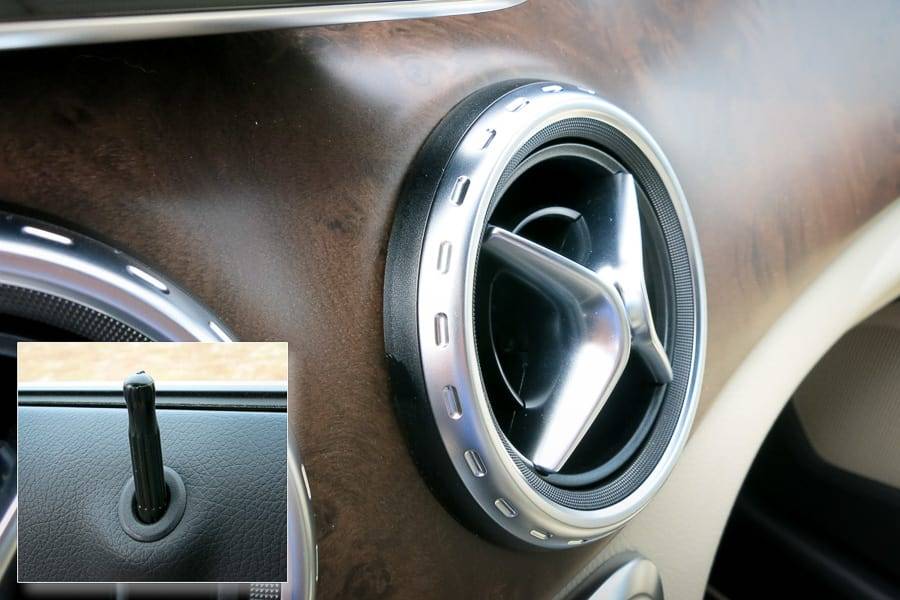 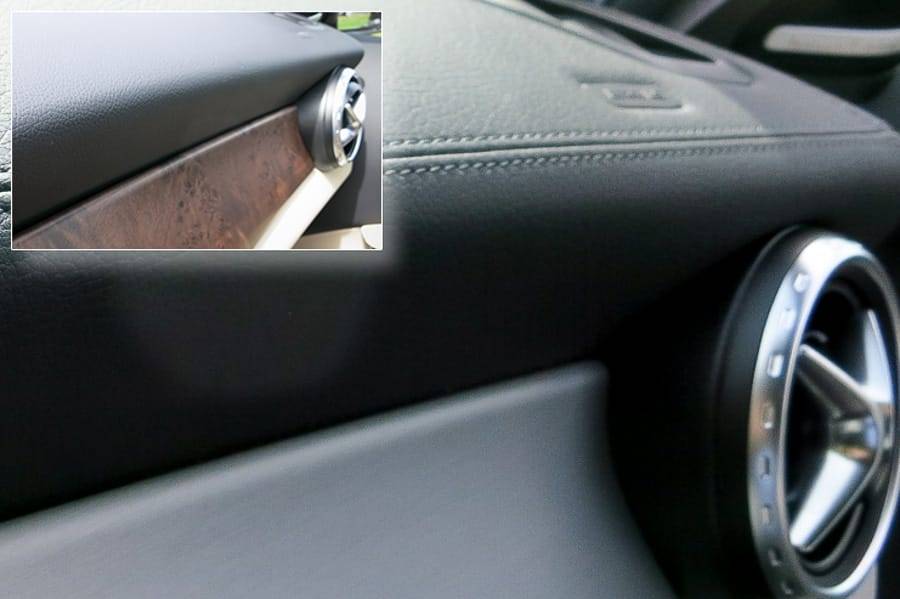 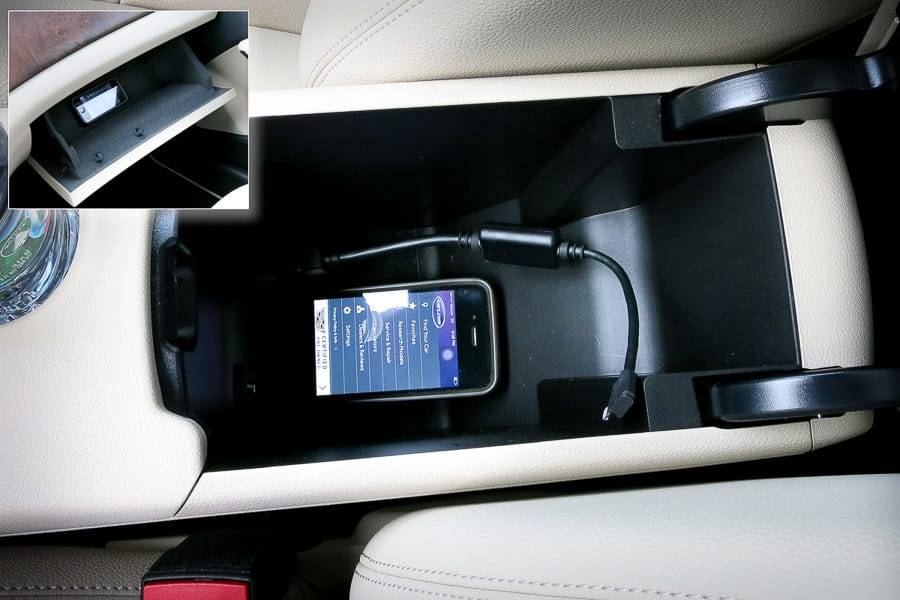 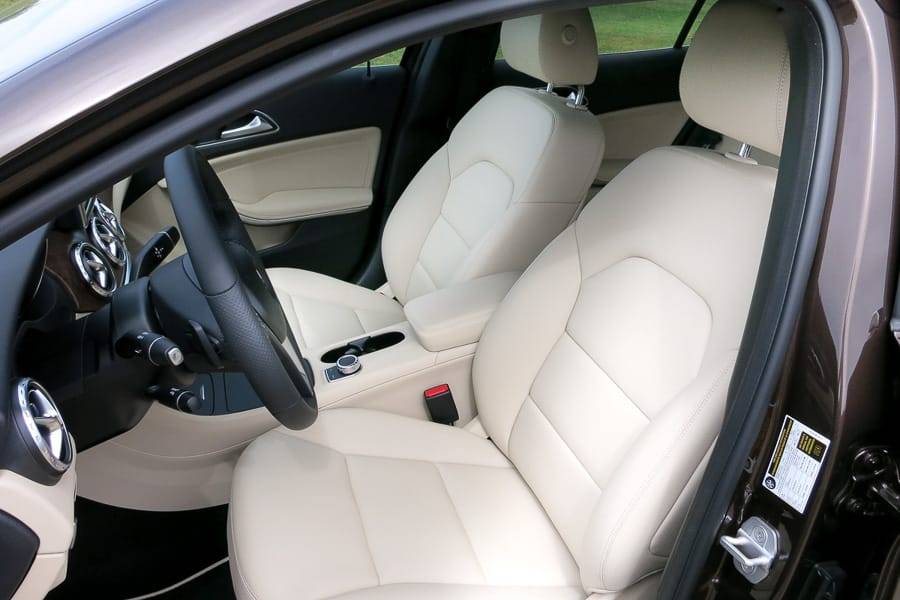 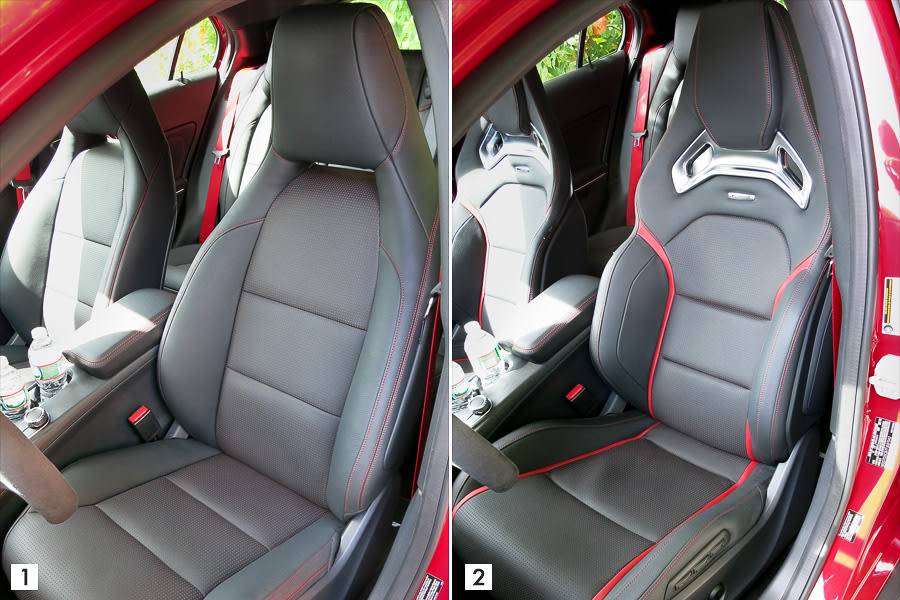 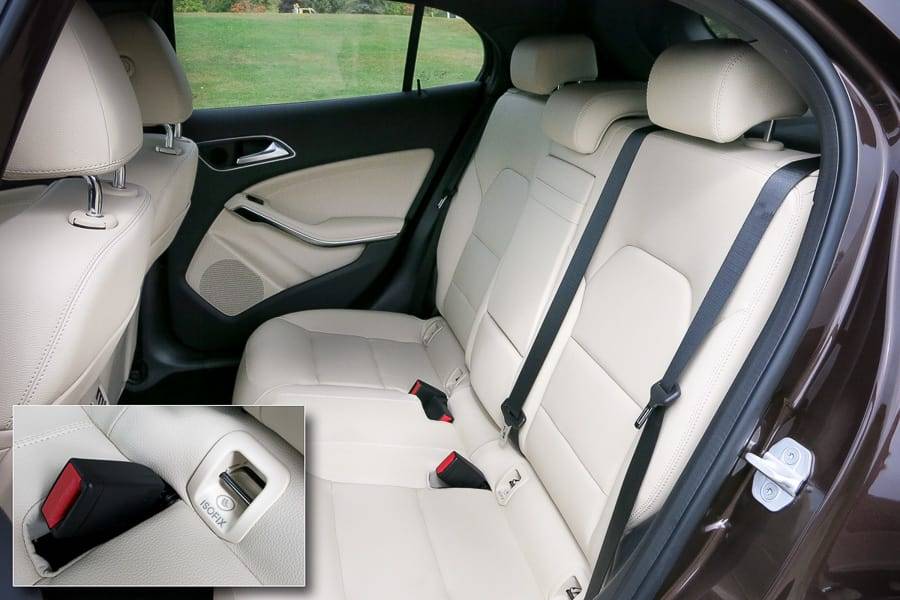 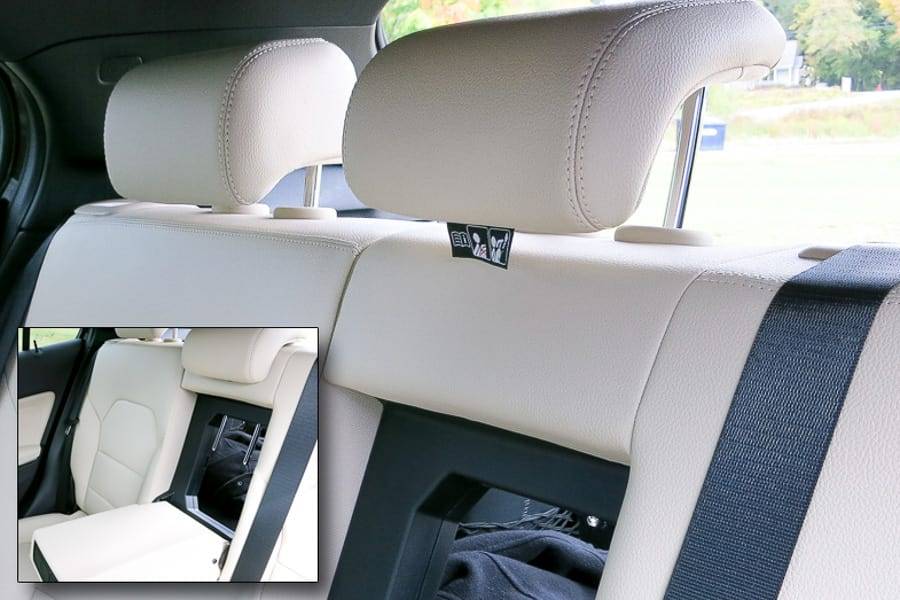 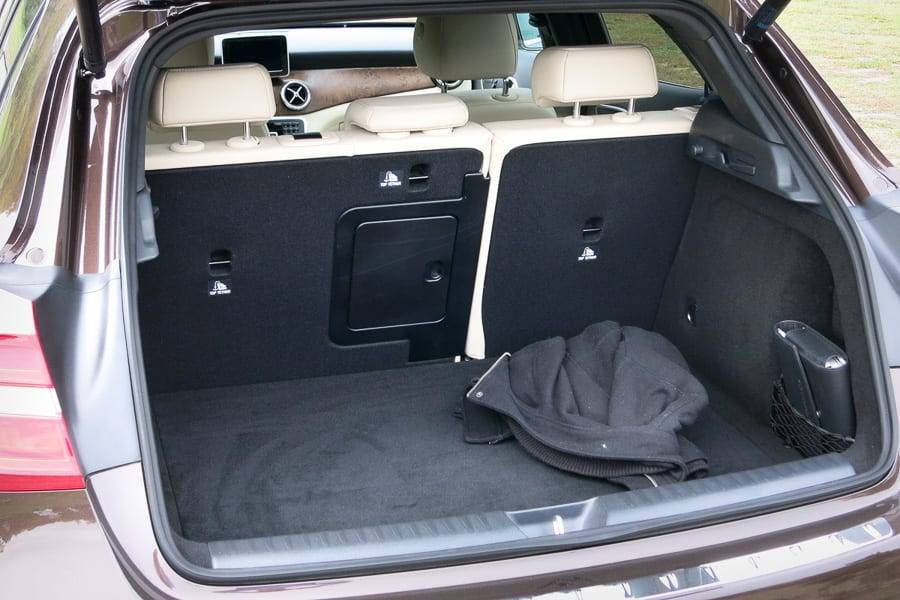 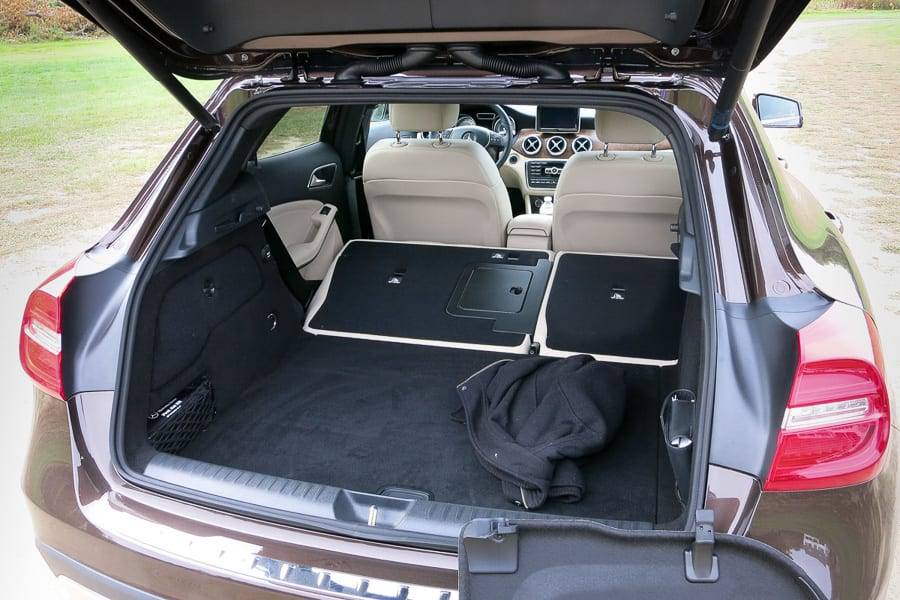 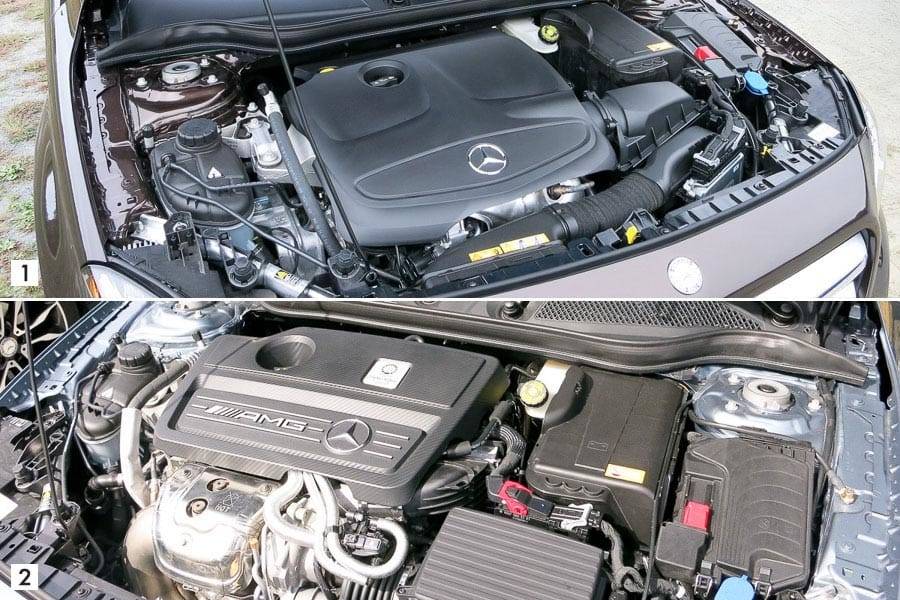 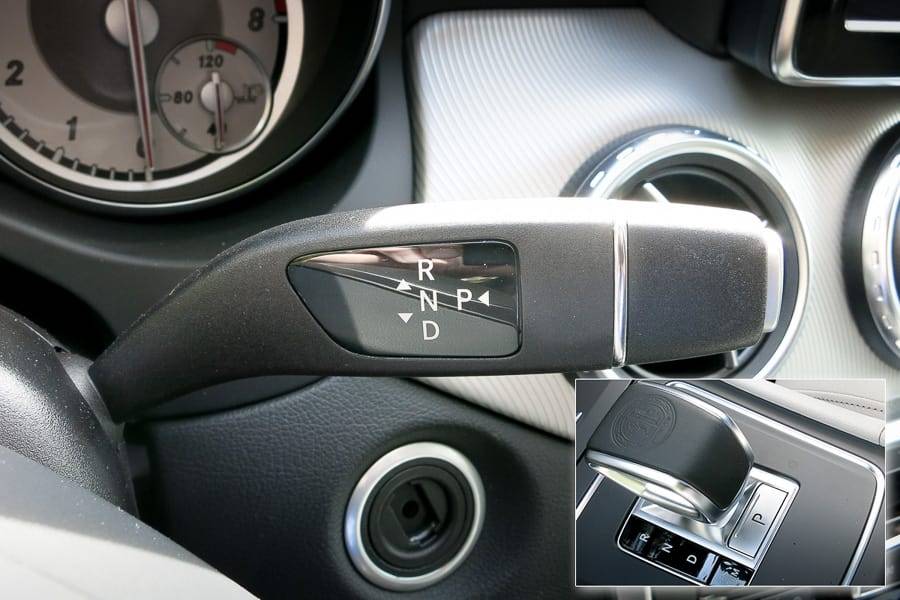 1/23
Is the GLA-Class an SUV or just a beefier hatchback? Such are the lines small crossovers have blurred for years. I think Mercedes falls more on the hatchback side. Fog lights are standard, while xenon high-intensity-discharge headlights with plunging LEDs | Toggle between photos using the right and left arrow keys. Cars.com photos by Kelsey Mays

As luxury brands wage a battle royale for mini-crossover SUV shoppers, Mercedes-Benz offers a featherweight fighter in the new GLA-Class. It has more practicality than its profile — a butched-up hatchback — suggests, and the turbocharged-to-the-hilt GLA45 AMG version packs rowdy, gleeful performance. Unfortunately, this SUV, if you want to call it that, loses its shine as a daily driver.

The 2015 Mercedes-Benz GLA-Class combines practicality and premium value with performance that ranges from capable to superlative, but you’ll want to weigh that against its unforgiving ride quality and poor sight lines.

Exterior & Styling
The fifth model in Mercedes’ SUV lineup (which now extends from the $32,225 GLA250 through the $138,075 G63 AMG), the GLA doesn’t just blur the lines between SUVs and hatchbacks — it stretches the very definition of an SUV. It’s just tall enough to avoid the gumdrop profile of Mercedes-Benz’s CLA-Class sedan, whose platform the GLA shares. But the overall effect makes for a beefier-looking hatchback, complete with side-cladding cutouts and a faux front skid plate.

Consider the GLA’s dimensions. Length and width cast a footprint similar to other premium mini-SUVs — the Audi Q3, BMW X1 and Volkswagen Tiguan — but overall height falls into hatchback territory. That’s particularly true for the GLA45 AMG, which sits nearly 2 inches lower than its GLA250 sibling and, at 58.2 inches, is just an inch taller than a Volkswagen Golf.

How It Drives
The all-wheel-drive GLA250 has sufficient power to breeze past slower traffic, thanks to a 208-horsepower, turbocharged 2.0-liter four-cylinder; its 258 pounds-feet of torque make for a smooth plateau of power as soon as you get on the gas. The Mercedes-Benz GLA class’ standard seven-speed, dual-clutch automatic transmission shifts smoothly at speed, though you’ll want to keep it in Sport mode for decent kickdown. The default Eco mode introduces early upshifts and reticent downshifts.

Unfortunately, the whole experience is neither quiet nor comfortable. My journalist co-driver and I observed excessive wind noise ahead of the B-pillars at highway speeds, and that’s just the beginning. The suspension thwacks away at potholes and the tires rumble mightily over broken pavement. The chassis cushions individual bumps well enough, but overall isolation is poor. Rapid dips and rises in the pavement bring an unnerving sensation of lateral movement, and the numb, loosey-goosey steering offers little help to rein things in. Come to a stop, and the GLA250’s clattery idle might fool onlookers into thinking it’s a diesel — the summary snapshot of a driving experience that needs polish, particularly compared with the well-sorted ride quality in competitors like the Audi Q3 and Lincoln MKC.

At least there’s a handling payoff. The GLA250’s suspension keeps body roll in check on twisty roads, and steering feedback improves as you point the nose into sharp corners. Our GLA250 test vehicle’s 19-inch wheels and P235/45ZR19 tires ceded some grip up front on hairpin switchbacks. That’s something we didn’t experience in the ground-hugging Mercedes-Benz GLA45 AMG, which had optional 20-inchers and P235/40ZR20s. Both our test cars had the same brand of Continental high-performance summer tires, but the AMG’s all-wheel drive routes power to the rear axle based on handling needs; the GLA250’s all-wheel drive sends power rearward only as the front tires lose traction. The result? You can work the tail on the GLA45 AMG into modest drifts on sweeping corners — far more difficult to accomplish in the GLA250.

Speaking of the AMG, the 355-hp GLA45’s turbocharged four-cylinder comes on hard at 3,000 rpm or so, and from there on up it surges forth with an urgency that’s unrivaled in this segment. It’s a peakier experience than the GLA250, whose torque feels more evenly distributed along the tachometer; here, the prodigious acceleration comes after a moment of initial lag. Our tester’s AMG Performance Exhaust ($450) enhanced the sound for noisy exhaust pops during hard upshifts; it’s either badass or dumbass, depending how you like tailpipes to sound.

Ride quality feels similarly stiff in the GLA45 Mercedes-AMG. There’s an optional AMG Performance suspension that comes with an $1,100 AMG Driver’s Package, but Mercedes didn’t have any examples for journalists to drive.

Interior
Like in its Mercedes-Benz CLA class sibling, the predominant takeaway from the Mercedes GLA’s cabin is poor visibility. The rear window is larger than the CLA’s glorified porthole, but other similarities persist. The sweeping roofline hulks above short windows and a dramatically raked windshield. Thick A-pillars descend into small side mirrors. Some shoppers will deem it an instant deal-breaker; I don’t blame them.

Cabin materials are competitive for the class, with consistent surfaces along the doors and upper dash. Optional dashboard stitching looks like molded-in threading up close; Lexus does a better job with its faux-leather panel stitching. GLA45 AMG models have standard sport seats with MB-Tex leatherette (vinyl) and cloth upholstery. Genuine leather seats are optional, as are Recaro performance buckets in leatherette-and-cloth or real leather. Stick with the base or sport seats; the Recaros are as comfortable as running into your ex.

Larger drivers may feel like their legs are pinned between the door and center console; the cockpit layout doesn’t provide much room to stretch. However, the backseat has surprising legroom and headroom, even with the optional panoramic moonroof installed in one of our test cars. Long-legged adults may wish the seat were another inch off the floor, and I’d like to see reclining seatbacks versus the GLA’s fixed ones. But given the car’s small outward size, this is a good setup — particularly for parents with small children. Those people will find the exposed Latch anchors a welcome help for installing car seats.

Standard features include power front memory seats, a power liftgate and rain-sensing wipers. The standard MB-Tex does a decent impersonation of real cowhide, the latter of which comes packaged with sport seats, the dash stitching and a few other items for $1,700.

Ergonomics & Electronics
The GLA’s standard multimedia setup includes HD radio and Bluetooth phone and audio streaming. A Harman Kardon premium stereo is optional, but it’s unremarkable — both because of mediocre sound quality and because it has to fight a cacophony of road and wind noise.

A center multimedia display measures 5.8 inches, or 7 inches if you get a Multimedia Package ($2,480). The package includes a backup camera, which really should be standard in any luxury car. No matter the size, the display works through Mercedes’ familiar Comand interface — a simple knob version, not the next-generation touchpad/knob combo seen in the new C-Class.

Safety
The GLA has not been crash-tested, but its generous list of standard safety features includes forward collision warning with auto braking, drowsy driver detection and eight airbags. Optional side torso airbags for the backseat bring the total to 10 (head-protecting side curtains are standard). Blind-spot and lane-departure warnings, plus full-speed adaptive cruise control, are optional. Click here to see a full list of safety features.

Value in Its Class
All-wheel-drive GLA250s start around $34,000, and the front-drive GLA250 will start around $32,000 when it hits dealerships next spring. Mercedes officials told reporters that typically equipped GLA250s will run around $35,000 to $37,000, depending on driveline. That’s in line with the median listing price of new Q3s on Cars.com and a bit below the median listing for four-cylinder X1s. It also aligns with the NX 200t’s $35,405 starting price. Mercedes has a value edge, though: The GLA’s generous safety features include standard forward collision warning with auto braking, and the base engine makes an EPA-estimated 24/32/27 mpg city/highway/combined with all-wheel drive. That’s 1 to 4 mpg better in combined ratings than the all-wheel-drive competition.

The $49,225 Mercedes-Benz GLA45 AMG, meanwhile, has features similar to the GLA250, so the extra $15,000 or so pays for cosmetic upgrades and a whole lot of performance. That puts the AMG in its own league; the X1 xDrive35i is slower, and the pricier Audi SQ5 is considerably larger. It should have no trouble finding its niche of dedicated buyers.

The mainstream Mercedes-Benz GLA250 is worth a look, too, but you’ll want to weigh the good with the bad. Luxury cars are often a choice born of want over need, and it’s nice to see Mercedes bring a few left-brained sensibilities to the table. But make sure you consider the Mercedes-Benz GLA class’ practical handicaps.