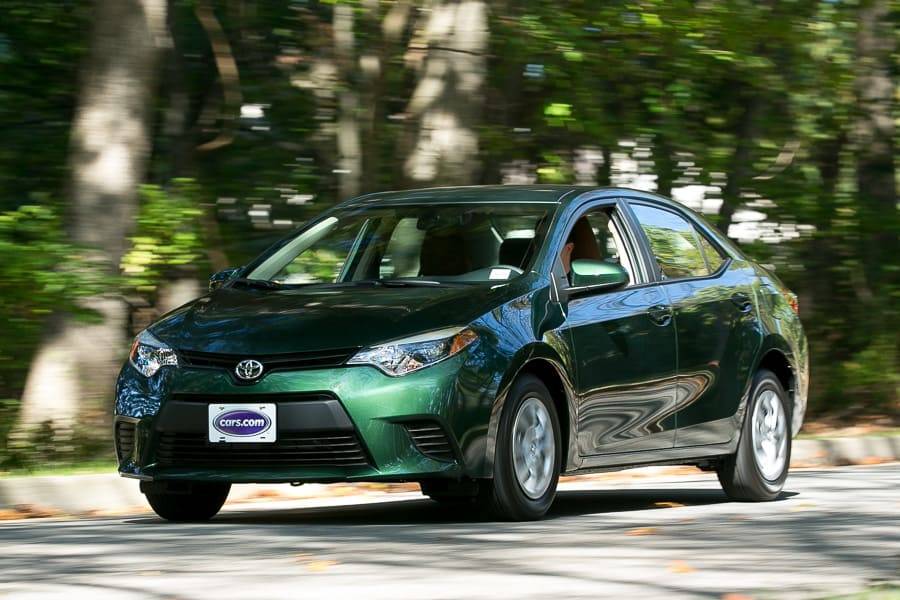 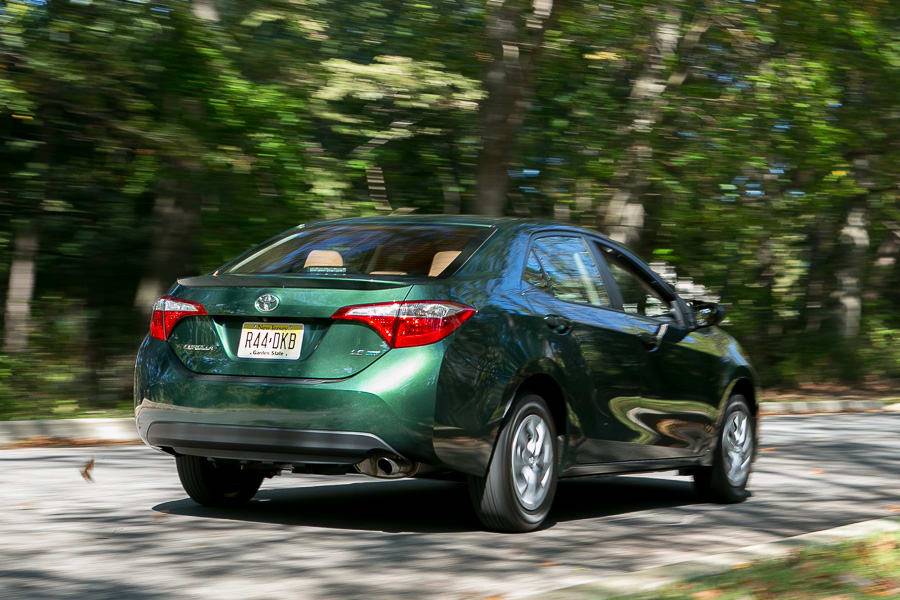 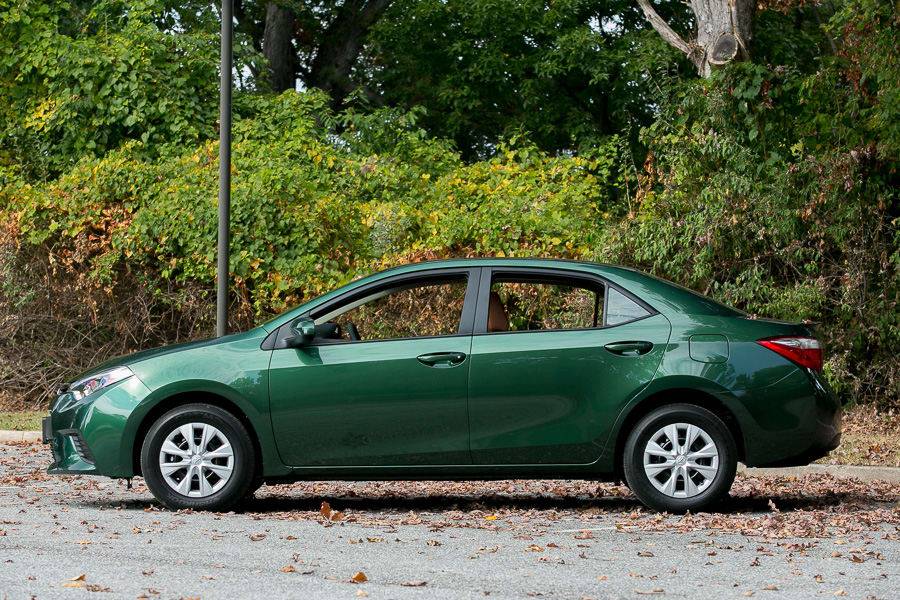 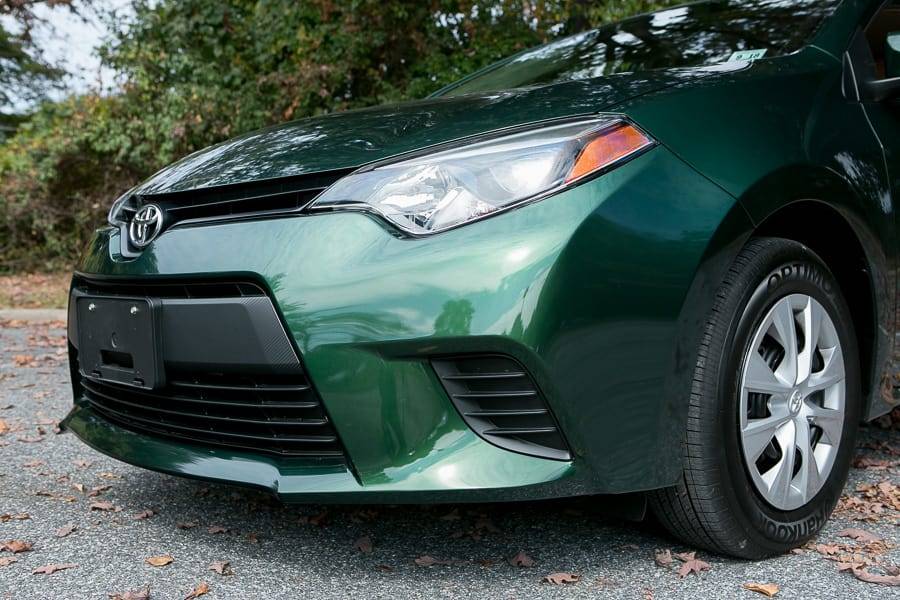 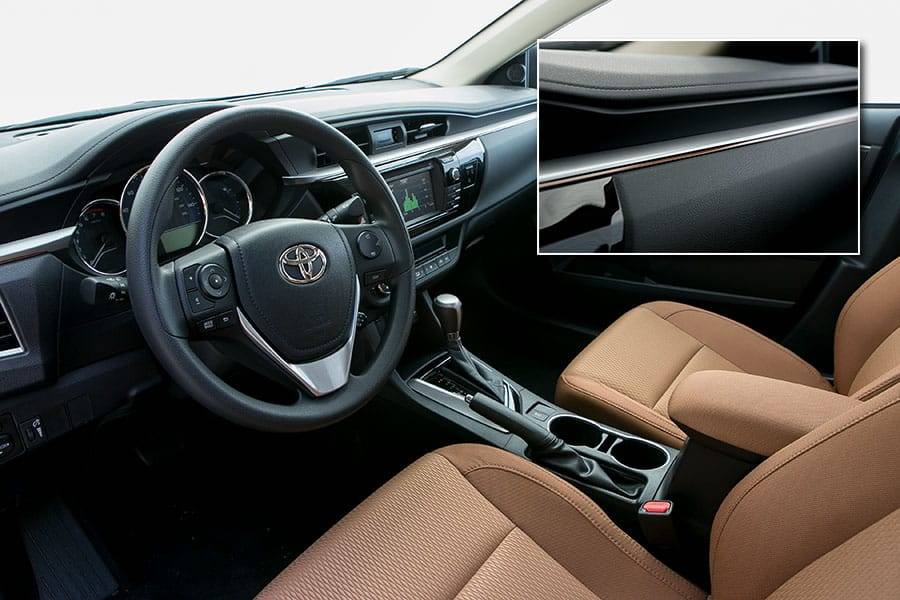 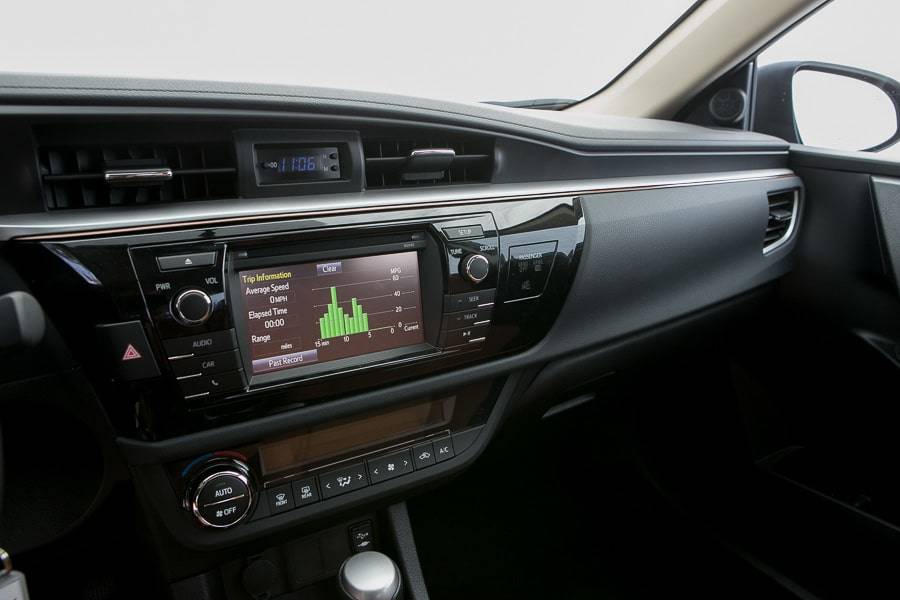 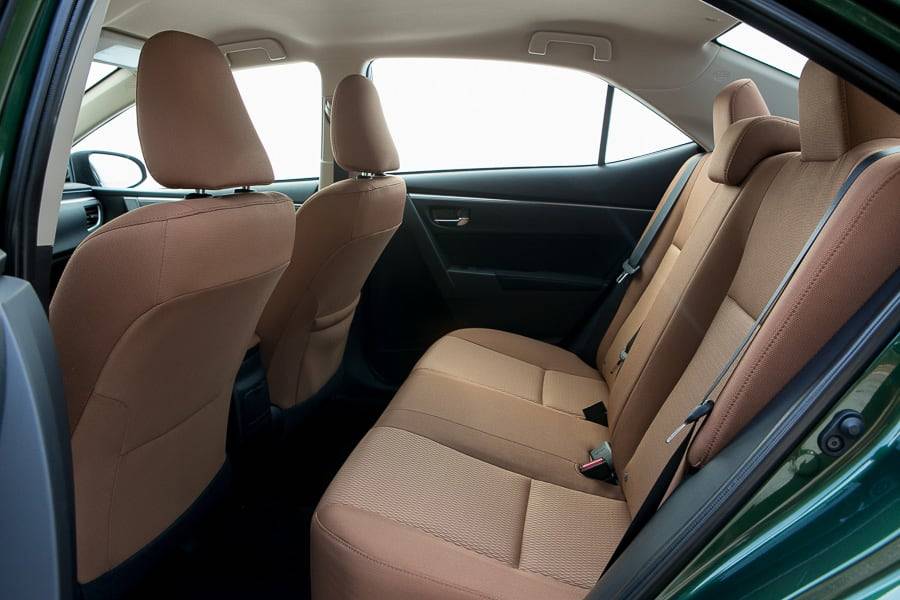 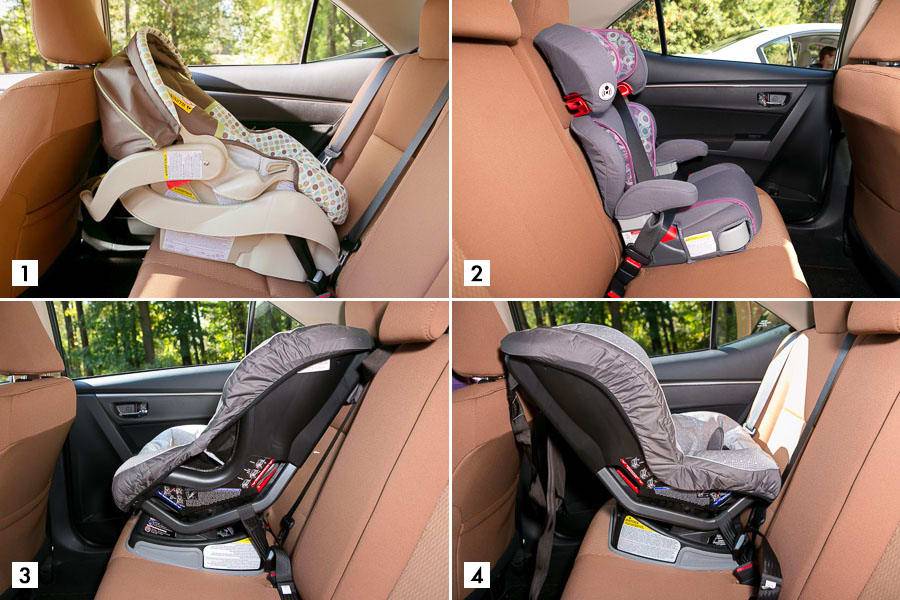 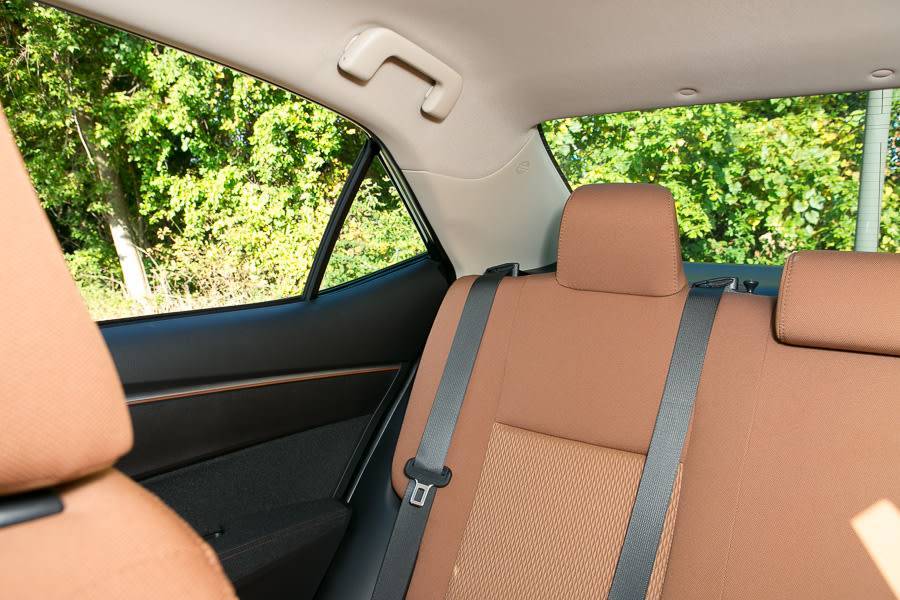 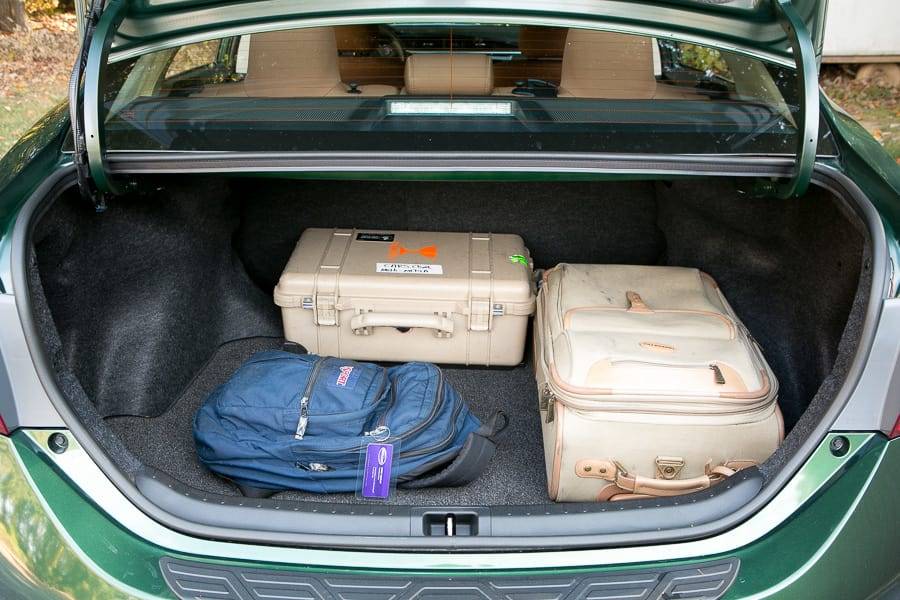 Editor’s note: This review was written in October 2013 about the 2014 Toyota Corolla. Little of substance has changed with this year’s model. To see what’s new for 2015, click here, or check out a side-by-side comparison of the two model years.

If you’re shopping in the compact-car class, fuel efficiency and affordability are most certainly among your top priorities. Toyota’s redesigned compact sedan delivers both — as long as you’re OK with a few tradeoffs in comfort.

The 2014 Toyota Corolla is a big improvement, but it ranks merely midpack against other compacts, especially in terms of cabin noise and ride quality.

Along with an exterior styling makeover, the 11th-generation Corolla gets a revised engine and a more upscale interior for 2014. Compare the 2013 model with the 2014 model here.

This is a big, busy class with plenty of solid contenders and a near-constant redesign schedule. The Corolla’s main rivals include the Honda Civic, Hyundai Elantra and Ford Focus. Compare them here.

Exterior & Styling
For 2014, the Corolla pulled an automotive Miley Cyrus: Toyota took the sedan’s exterior from Hannah Montana conservative to attention-grabbing starlet (unfortunately, Robin Thicke wasn’t involved). Its standard LED-accented headlights, chiseled body lines and pumped-up grille make it the most dramatic-looking Corolla yet. In truth, however, any update would’ve elevated the 2013 version from the depths of its drabness.

Instantly apparent are cues Toyota borrowed from the Avalon large sedan (the grille and headlights specifically look familiar), and although the words “large sedan” don’t usually convey excitement in the styling department, the effect works on the Corolla. The sedan’s fresh looks can’t match the aggressive, sporty stance of the Kia Forte or the sweeping elegance of the Hyundai Elantra, but it can remove “boring” from its list of woes.

How It Drives
Although the old Corolla’s lackluster looks are gone, a polished exterior can’t hide an unpolished driving experience.

First, the hits: Toyota did a great job with the continuously variable automatic transmission. It feels more natural and refined than the units in the Subaru Impreza and Nissan Sentra. I drove the Corolla LE Eco model, and power delivery from the 140-horsepower, 1.8-liter four-cylinder was also quicker than the other two. Some CVTs in the class take their time building power and cause their engines to complain loudly, but Toyota’s is both responsive and relatively quiet. It can get loud when pushed, but it’s far from the biggest offender.

Other models (L, LE and S trims) use a version of the 1.8-liter that’s good for 132 hp. Standard on the base L is a six-speed manual transmission, and an old four-speed automatic is optional; the CVT is standard on all other trims.

Now the misses: Although decent pep puts it at the top in terms of power, unreasonable noise levels drop the Corolla to the bottom of the segment. Noise pours in from everywhere. The mirrors cause quite a bit of wind ruckus, and road noise will have you checking to see if all the windows are closed, leaving the powertrain’s unrefined note topping off circus-like levels of loudness. This was a problem with the previous version, too, and the redesign hasn’t put a dent in it.

Though on the firm side, an even bigger problem with the sedan’s ride quality is a lack of isolation. Too much of the road comes into the cabin, so uncomfortable levels of vibration and harshness are constant, uninvited passengers. The ride itself often borders on jittery, with a bit too much hop over larger bumps. Like the Honda Civic, the firmness is tolerable at first but becomes exponentially uncomfortable as the drive wears on. The Kia Forte and Ford Focus, however, ace ride quality; both retain a comfortable level of composure over bumps.

The Corolla scores better in terms of handling, with natural-feeling steering and confident roadholding abilities. It doesn’t feel sporty, but the sedan takes corners without sloppiness.

Interior
The makeover is no less extreme inside. Toyota replaced the previous generation’s drab design and materials with an appealing blend of color and texture, along with a more horizontal control layout.

The Corolla I drove combined a dark green exterior with camel-colored tones inside and was very inviting. It’s an improvement over last year’s budget-grade motif, but the cabin still can’t match the Elantra’s blend of high-quality materials and sophisticated design. It does, however, offer more quality and style than the cabins of the squeak-and-rattle-prone Focus and conservative Forte.

Beauty is not skin deep in this case. Not only does the inside look good, but it also feels good, too. The door panel armrest is padded enough, and the seats strike a good balance: supportive without being too firm, cushy without being too mushy. One small missing item is a sliding sun visor, which many cars have and are useful every day.

At 182.6 inches long, the Corolla is one of the biggest sedans in the class after growing a couple inches for 2014. Extra length means added passenger space, and legroom is generous in the front and rear seats. The backseat cushion, however, is rock-solid.

Ergonomics & Electronics
Many controls and screens are in a similar spot in the new-generation Corolla, but the layout has been stretched horizontally for 2014. It looks like Toyota was aiming for a more streamlined arrangement. The result is more appealing overall, but the panel is still overloaded with buttons. Figuring out what they all do isn’t a problem, however.

The 6.1-inch touch-screen audio unit is again standard on the LE trim level and above but unavailable on base trims. The screen size is decent for menu legibility and button size. The system features Toyota’s Entune app suite, and Bluetooth audio streaming with my Android phone was seamless. Connecting to my Pandora Internet radio app was also easy, but I’d like to see more functionality. You can use the touch-screen to play and pause a song, but functions like skipping a tune or loading a new station aren’t available.

Cargo & Storage
Despite the gains in size, the Corolla’s trunk is still relatively small, with just 13 cubic feet of space. That’s up from last year’s rating of 12.3 and bigger than the Civic’s trunk (12.5), but slightly smaller than the Focus (13.2) and Elantra (14.8). More annoying is the Corolla’s trunk design. Large metal hinges protrude into the luggage space; many automakers have upgraded to smaller, strut-like devices.

The backseat folds in a 60/40 split for additional cargo space — a useful feature that isn’t standard on the Civic or Focus.

Up front, there’s a phone-sized cubby handily located in front of auxiliary input and USB ports, as well as a small-ish center console; the Civic’s is much bigger and includes a comfortable sliding armrest. For the backseat, there are two flimsy pop-out cupholders (they wouldn’t last a week with my family) and one bottleholder in each door.

Safety
The 2014 Toyota Corolla is an Insurance Institute for Highway Safety Top Safety Pick, earning Good ratings in all areas of testing except the difficult new small-overlap frontal crash test. The Corolla scored Marginal in this test, only one step above the lowest score of Poor. The Forte scored Poor in this area, but the Civic, Elantra and Focus performed better, earning Top Safety Pick Plus status. The National Highway Traffic Safety Administration has yet to crash-test the Corolla.

A backup camera is unavailable on base L models but standard on every other trim. The only car in this class with a standard camera across the lineup is the Civic, the base price of which compares with the Corolla LE. The Corolla also comes standard with a driver’s knee airbag and both driver and passenger seat cushion airbags that inflate under the knees — uncommon features in this class. Click here for a full list of safety features, and see how well the Corolla accommodates child-safety seats in our Car Seat Check.

Shoppers looking to upgrade to an automatic will also find the Corolla affordable. The outdated four-speed is an extra $600, lower than the additional cost for the Civic’s automatic ($800), the Focus’ dreadful automated manual ($1,095) and the Elantra’s six-speed unit ($1,000).

We called the 2013 Corolla “sub-mediocre” in a segment bursting with impressive vehicles, so this redesigned version has a heck of a hill to climb. Although the Hyundai Elantra and Kia Forte are kings of the mountain in terms of value, features and comfort, the new Corolla makes some strides in terms of fuel efficiency and interior materials.

Chances are, however, that few people will care that it still falls short. Despite the previous Corolla’s stinker status, people still bought it — loads of people. Toyota has sold more than 40 million Corollas worldwide since it went on sale for the 1989 model year. In the U.S., the sedan continually tops monthly best-seller lists, vying for the top compact slot with the Honda Civic. It may not be as well-rounded as several cars in its class, but the 2014 Corolla is definitely a step up from the previous generation and will continue to attract the masses.