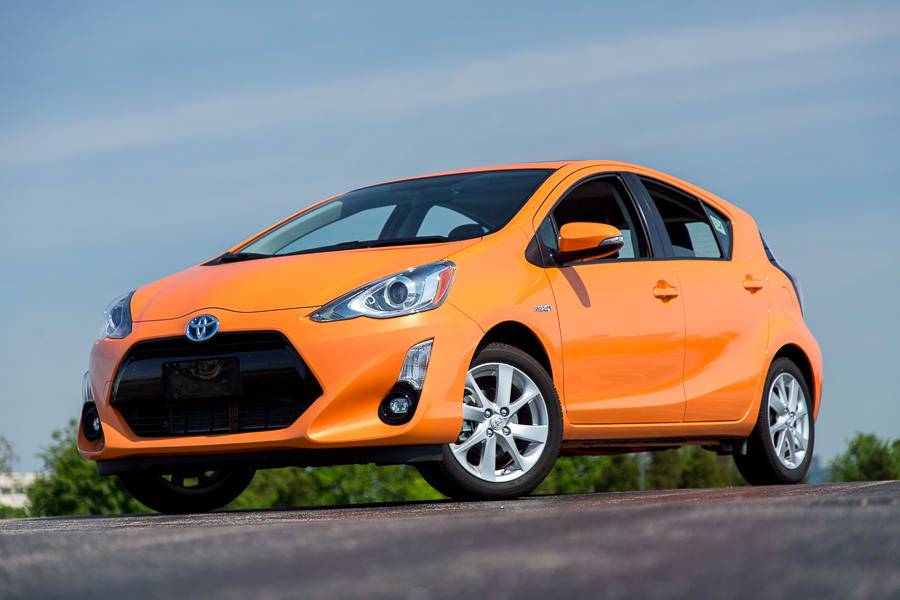 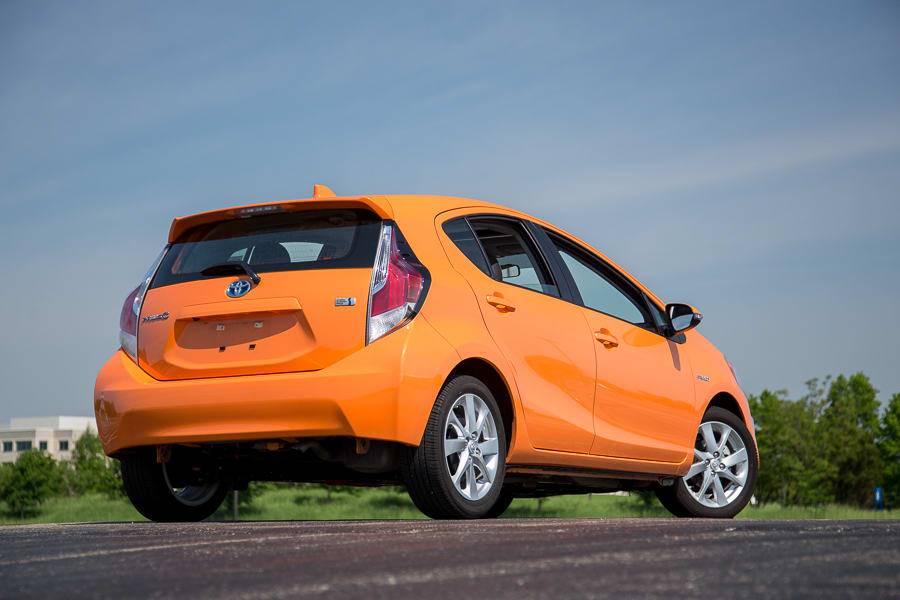 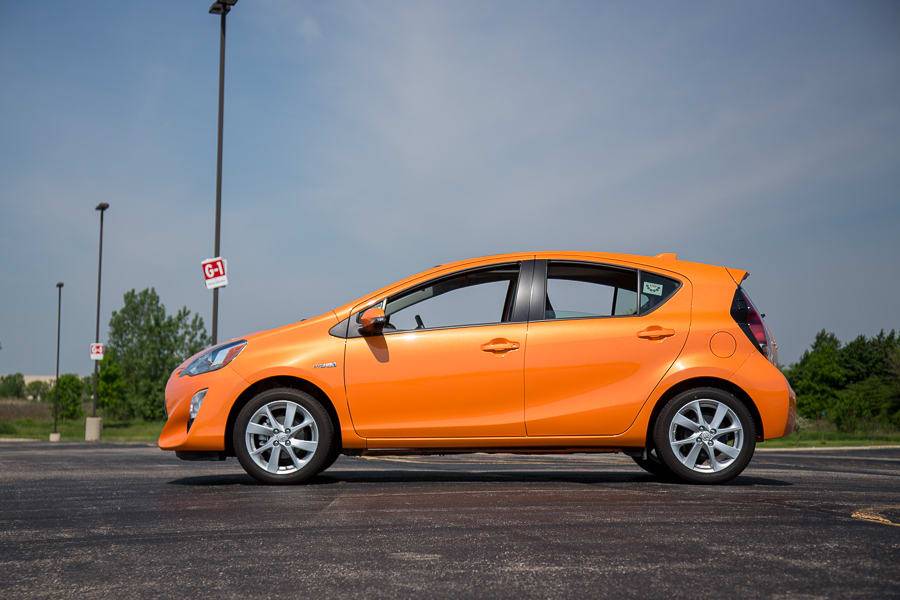 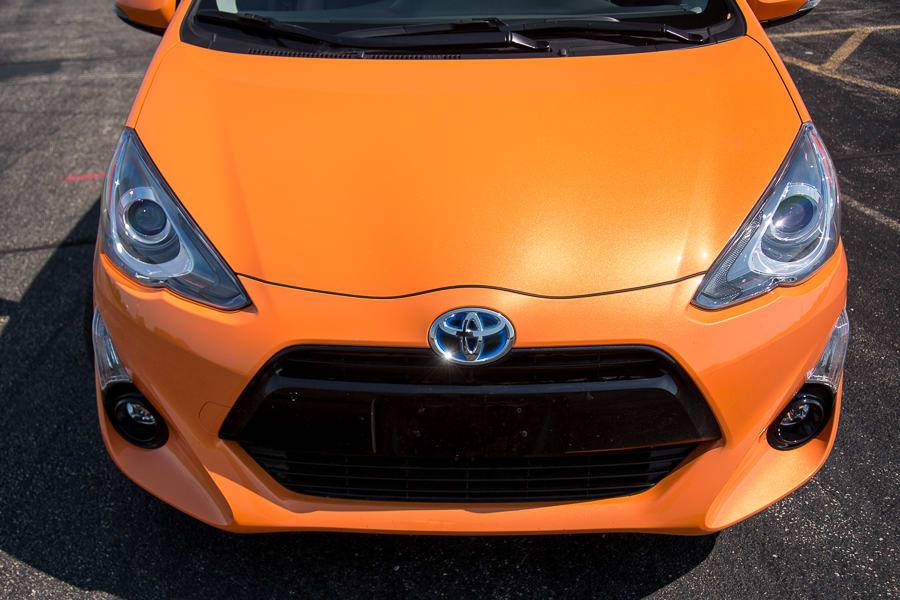 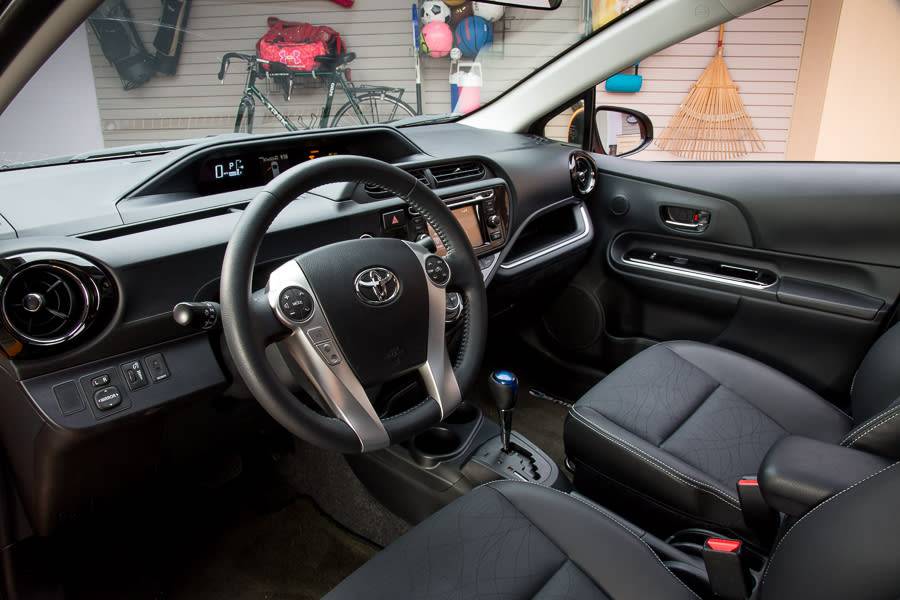 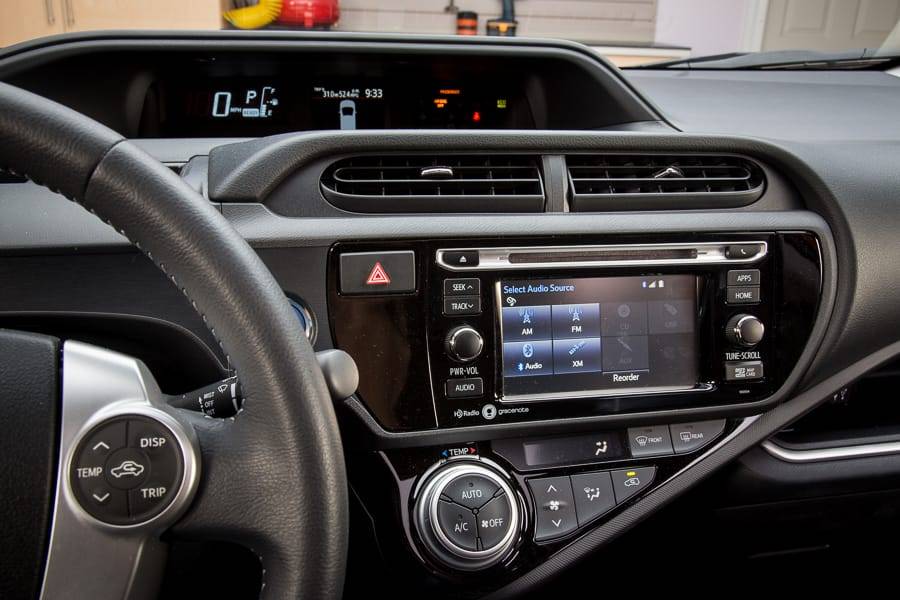 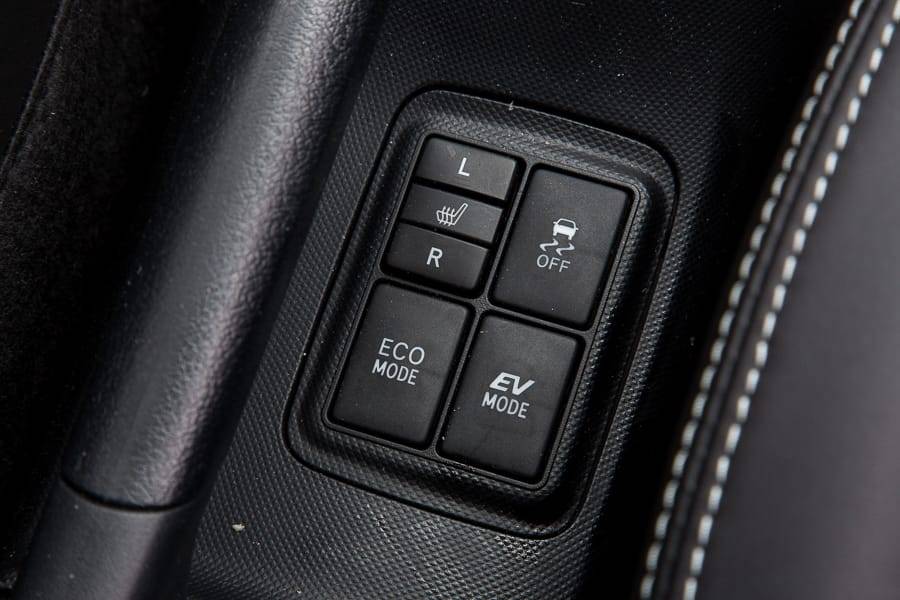 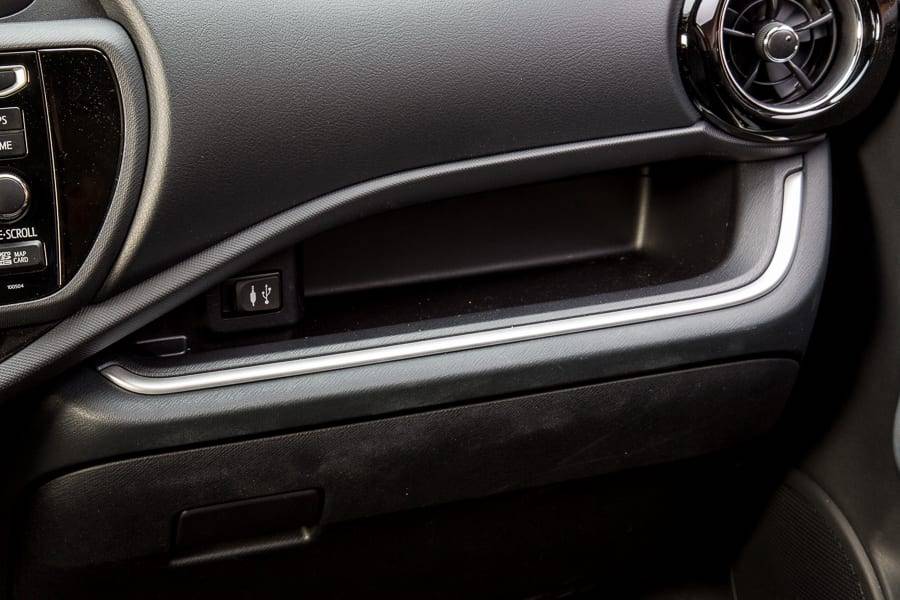 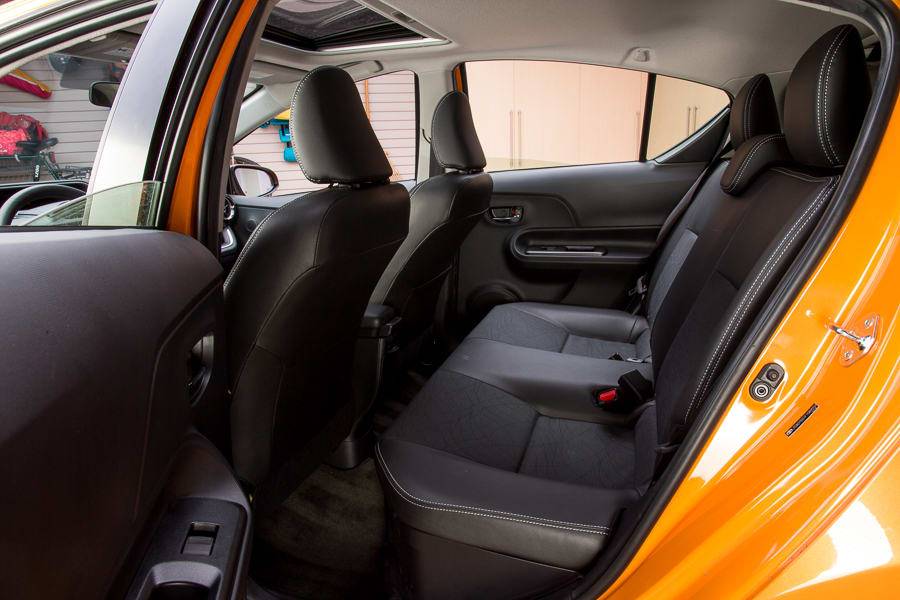 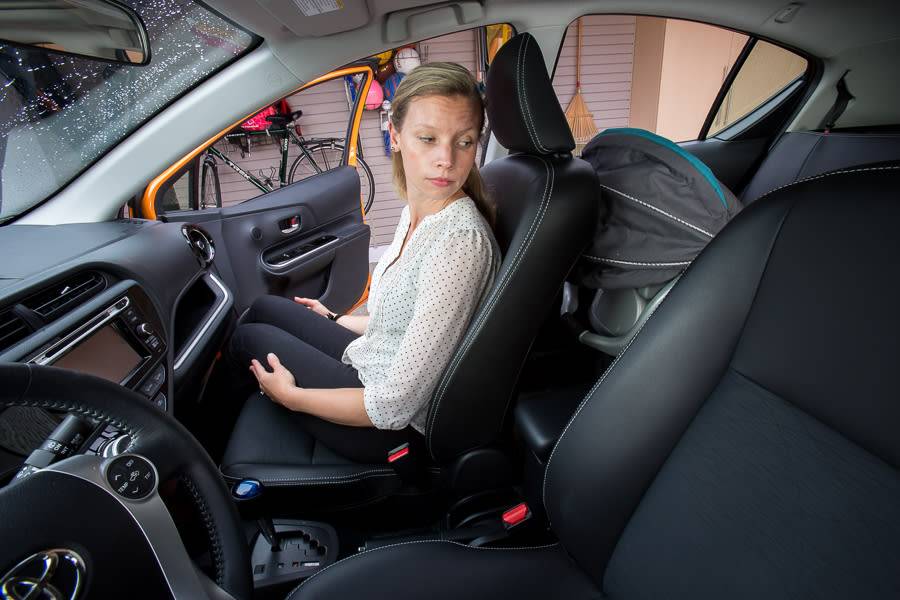 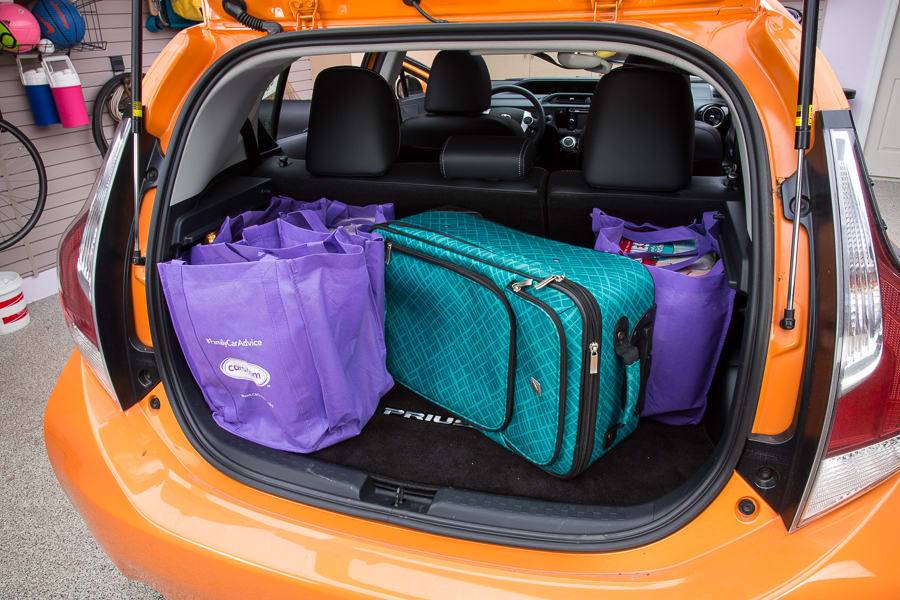 If affordability and high mileage trump everything else on your car priority list, look no further than the 2015 Toyota Prius c, though you’ll have to put up with some unpleasant highway manners.

Slotting below the regular Prius hatchback and the larger Prius v wagon, the subcompact Prius c got restyled for 2015 with a lightly revised face, more interior trim options and a newly standard 6.1-inch multimedia system. Compare the 2014 and 2015 models here.

Vehicles that come close to matching the c’s fuel economy are few, but include the Honda Civic Hybrid and Volkswagen Jetta Hybrid. Compare them here.

Exterior & Styling
If the Toyota Prius c’s designers were aiming for an angry Asian carp look, they hooked it. For 2015, the hatchback got a sharper face, with a menacing LED headlight design and gaping hexagon grille. Attractive it is not. To pile on, there are a few new exterior colors that will get you laughed at, pulled over or both (luckily it’s also available in more sedate colors). Toyota calls the new colors eye-catching, but my test car’s Tangerine Splash Pearl paint — a $395 option — was eye-popping in terms of both color and price. The other new colors are Electric Lime Metallic and Sparkling Sea Metallic.

To maximize fuel economy, drivers can put the car in Eco mode, which alters acceleration and climate output settings to save energy. I found takeoffs annoyingly slow in this mode. EV mode allows the car to run on battery power, but it’s not very useful since it can only do this for up to half a mile and at very low speeds.

The city is the Toyota Prius c’s natural habitat, where it returns its best mileage and is the most comfortable. It maneuvers well in tight spaces, and power from the tiny 1.5-liter four-cylinder is adequate. The car’s automatic stop-start system is smooth, unobtrusively shutting down at every stop with minimal shudder upon restarting. Lacking smoothness, though, are the regenerative brakes, which capture braking energy and send it to the battery. The pedal requires more pressure than you’d expect, so smooth stops take practice.

This particular Toyota Prius is less pleasant on the highway due in large part to road noise — a loud, constant companion that sucks the fun out of a highway cruise — and a lack of power. The emphasis on mileage over ride means that the tires aren’t very sticky or quiet – even on the upgraded alloy wheels. Highway merging and passing require a lot of planning, patience and pedal-stomping. Steering feel is also unnervingly light at speed; with a curb weight around 2,500 pounds, even a light breeze tosses the car around, requiring a wrestling match with the steering wheel.

Interior
New standard features in my top-trim test car, the Toyota Prius c four, include two-tone fabric seats, a moonroof, glossy black interior paneling and chrome trim, but they do little to mask the no-frills air of the cabin. It’s black-plastic overload, with too many patterns and textures combining for an overall mismatched design.

The front seats are cozily bolstered and comfortable — they don’t look or feel as budget grade as the rest of the interior — but padding is lacking elsewhere in the cabin. The door panel armrest could use more cushiness. So too could the center console armrest, which gets a triple strike: It’s also set too far back to comfortably use and it’s not adjustable.

In back, headroom is adequate but legroom isn’t generous; both the Jetta Hybrid and Civic Hybrid offer a good deal more. The c’s outboard seats are deep set and very comfortable, but the middle position isn’t a real option. It’s much narrower than the outboard seats and raised, so the passenger sits on an uncomfortable hump.

Families thinking of the Prius c as a second car will find enough legroom for a booster and a forward-facing child-safety seat, but a rear-facing car seat is a no-go. There’s not enough room to install one and comfortably accommodate a front-seat passenger. The Jetta and Civic do not have this problem. Read more in our Car Seat Check.

Ergonomics & Electronics
Toyota’s Entune multimedia system is newly standard, and extra multi-information features like local weather and a live radar weather map are handy. The system’s 6.1-inch touch-screen is responsive, and the menu structure is straightforward. Changing the audio presets and inputting a destination in the optional navigation system was easy, but the buttons on the screen are very small. Clearly marked home and back buttons are easy to find, however. Thankfully, not all controls have been absorbed by the touch-screen: Volume and tuning knobs flank the screen.

Below that is a large climate-control dial that’s very well placed for easy use while driving. The temperature settings can be adjusted using the traditional climate controls or buttons on the steering wheel.

Cargo & Storage
The center console box loses more points for being very tiny, though the glove box is large. Above that is a handy device tray, complete with aux and USB inputs.

In back, storage is minimal — and I hope your passengers don’t get thirsty: There’s only one seatback pocket and one flimsy cupholder that pops out of the center console. There aren’t even any bottleholders in the rear doors.

In back, this Toyota Prius’ hatchback body style makes this subcompact roomier than its larger sedan competitors. With 17.1 cubic feet of space in the cargo area, it offers more than either the Civic Hybrid (10.7) or the Jetta Hybrid (11.3). I fit about a dozen grocery bags in the back during one trip and a small stroller during another.

Safety
The 2015 Toyota Prius c is an Insurance Institute for Highway Safety Top Safety Pick, earning an acceptable score in the small front overlap test and good scores in all other tests. It had previously earned a poor score in the small front overlap test, and only models built after May qualify for the higher rating. Check your vehicle’s build date on a sticker on the driver-side doorjamb. In National Highway Traffic Safety Administration testing, the Prius c received four out of five stars in all the agency’s tests.

Nine airbags are standard, including a driver’s knee airbag, but a backup camera is only standard on the top trim level. It’s unavailable on other models. Common safety features, like a blind spot monitoring system and lane departure warning system, are not offered. Click here for a list of safety features.

Value in Its Class
The 2015 Toyota Prius c starts at about $20,000, but common extras like cruise control, the center console storage box/armrest, a cargo cover and a 60/40-split folding rear seat are not standard. Competitors cost more, but they’re also better equipped.

In terms of mileage and affordability, the Prius c is a very compelling car, but its discomforting safety ratings should be a factor shoppers consider carefully.