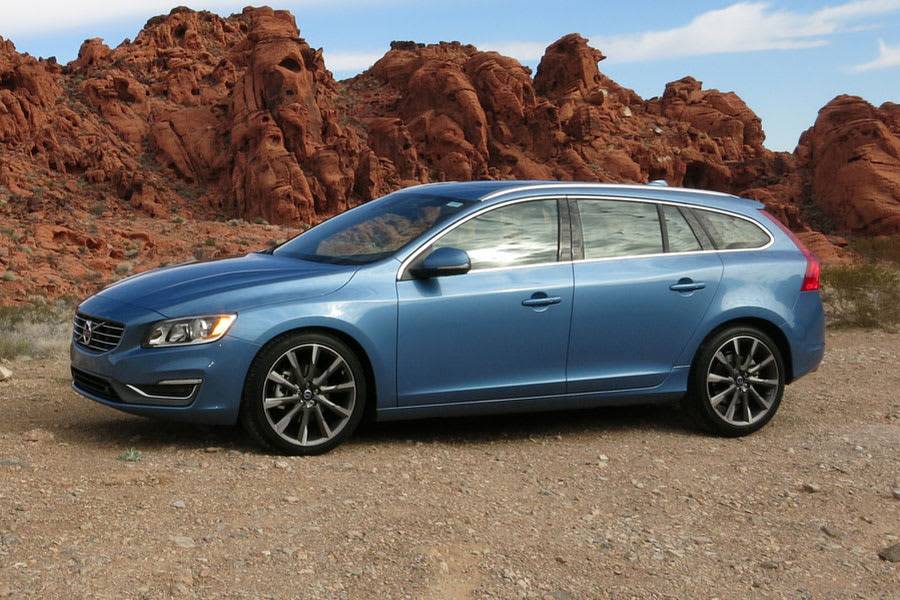 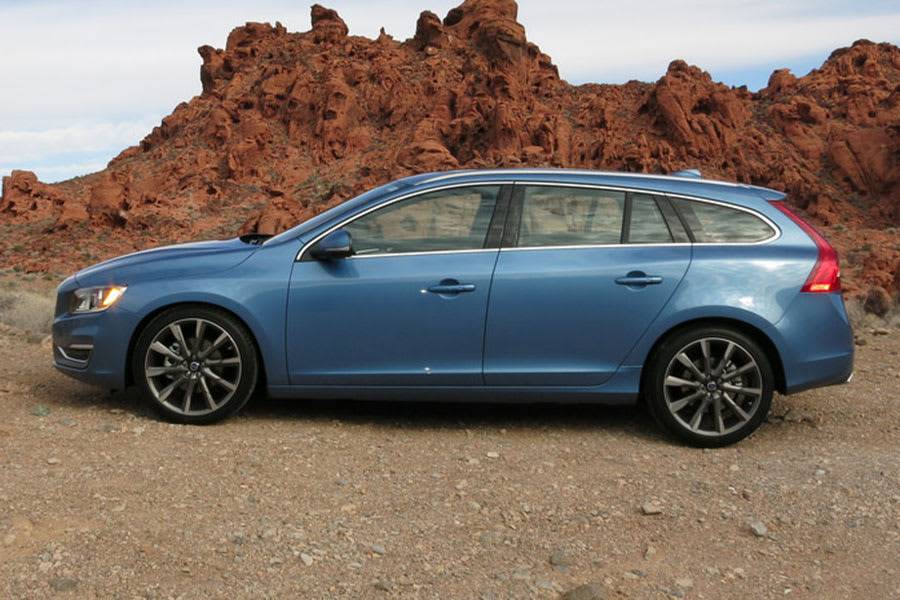 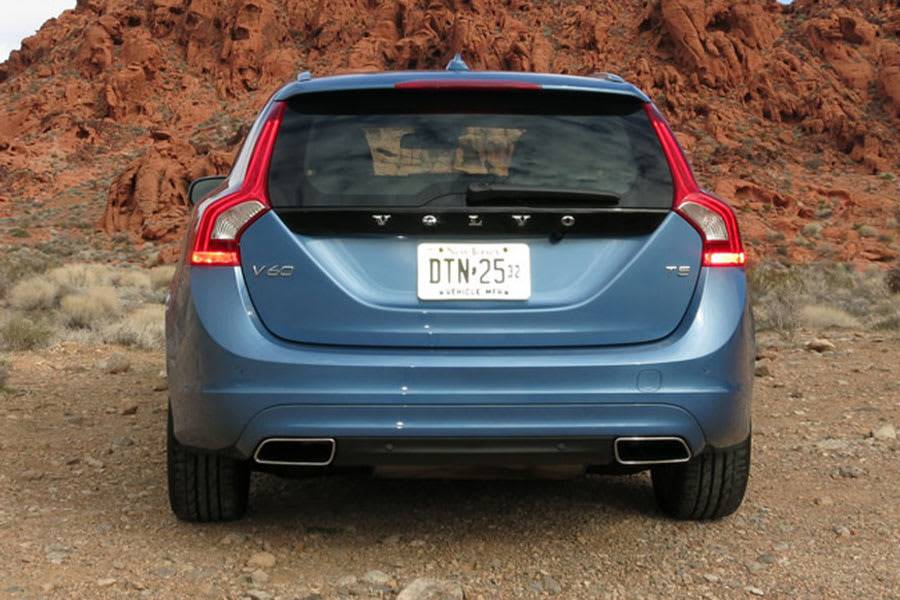 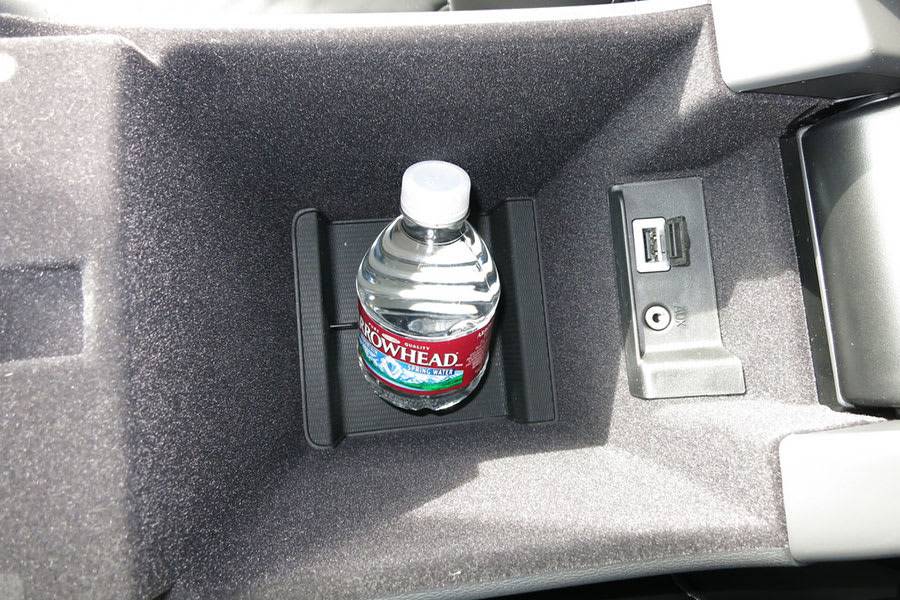 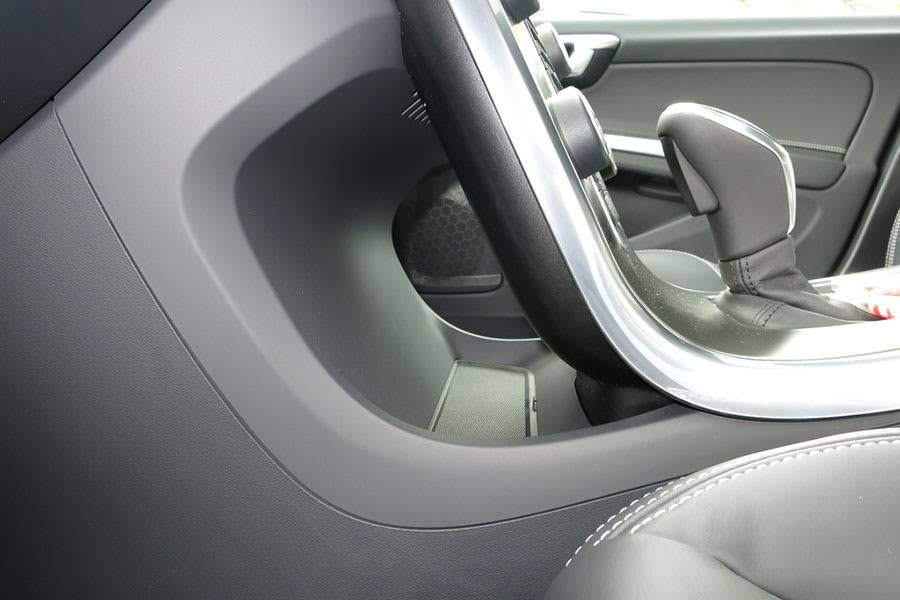 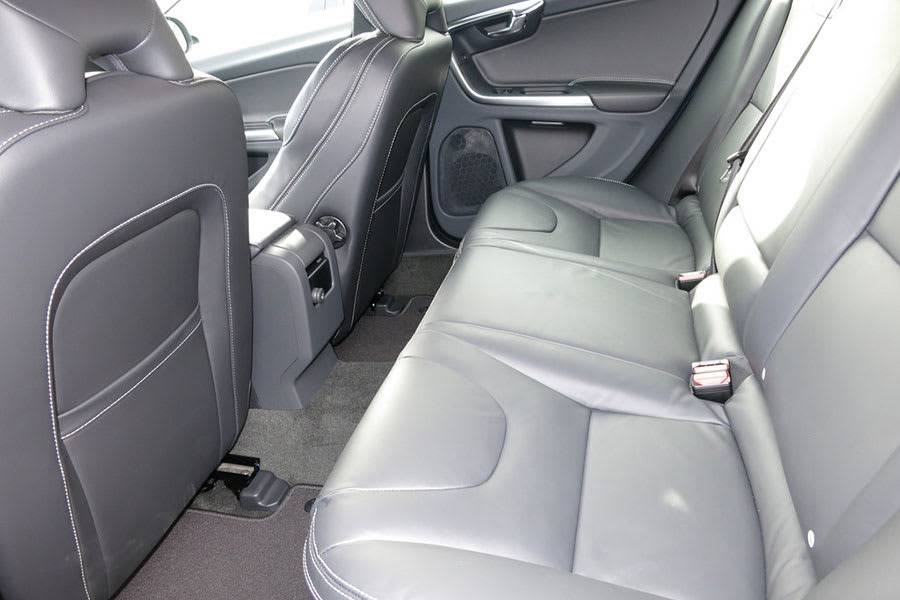 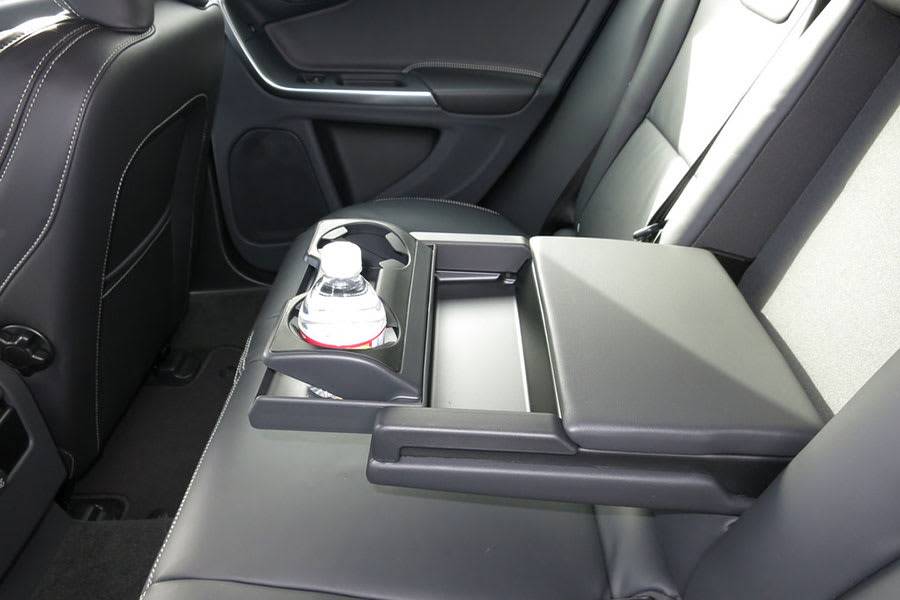 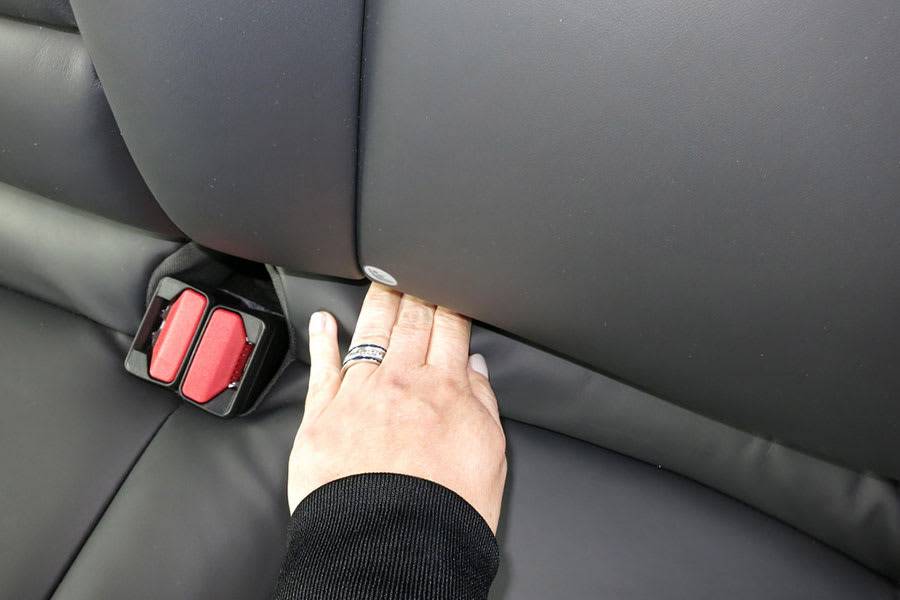 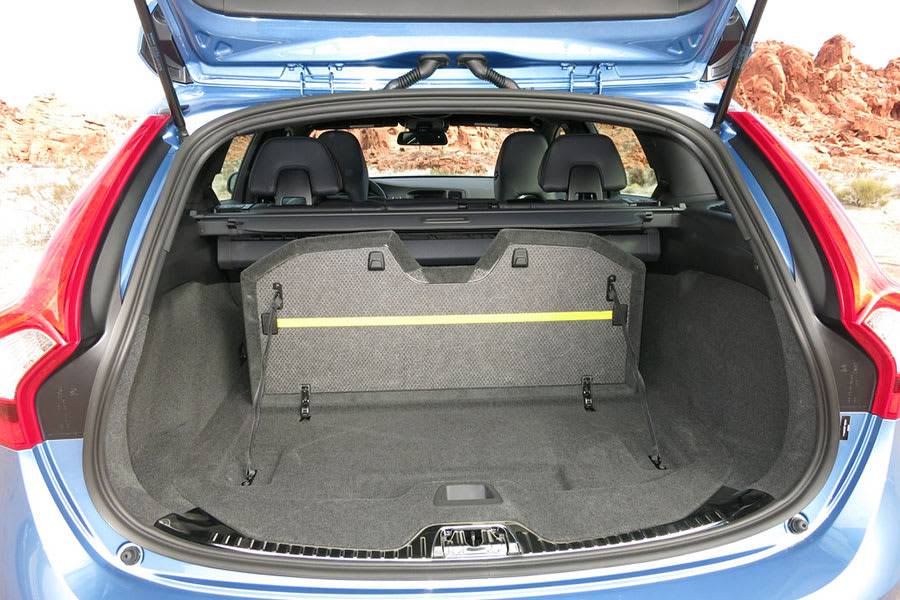 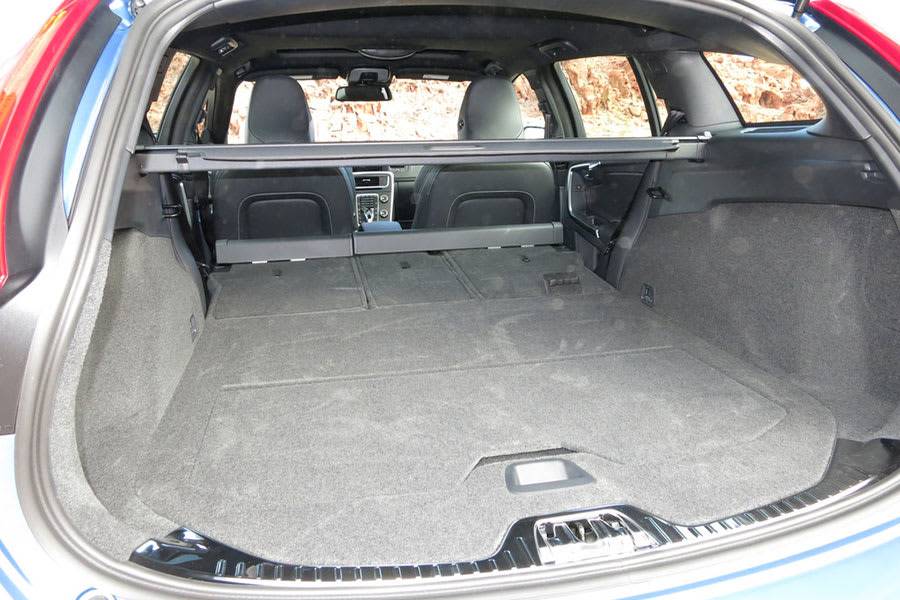 While the 2015 Volvo V60 manages to deliver in many regards, there are a couple of areas that fall a smidge short of my expectations for a luxury vehicle in 2015.

I’m a huge wagon fan (and in the interest of full disclosure, I used to own a Volvo C30 until my family recently outgrew it), so you can imagine my excitement at the automaker’s recent efforts to re-enter and re-energize the wagon market with the new V60, which is essentially the wagon version of Volvo’s S60 sedan. For families like my own who need a little extra utility over a sedan but don’t want to jump into a crossover or SUV, such as Volvo’s XC60, the V60 seems tailor-made at first glance.

The Volvo V60 is starting to arrive at Volvo dealers as I write this. Though the designation retains the numeral that once reflected the engine’s cylinder count, V60 T5s with front-wheel drive are powered by the new Drive-E four-cylinder engine. All-wheel drive calls on the proven inline-five-cylinder, at least initially (Volvo will transition to Drive-E engines exclusively). The T6 version has an inline-six-cylinder and all-wheel drive. All the engines are turbocharged.

Trim levels for the T5 include base, Premier, Premier Plus and Platinum. The T6 comes in R-Design and R-Design Platinum trims. I drove the T5 AWD Premier Plus with an eight-speed automatic transmission and stop-start technology. Compare my test car with the T5 and T6 Platinum versions here.

If the V60 doesn’t float your boat, you may also want to look into the Acura TSX Sport Wagon, BMW 3 Series wagon and, for comparison, the XC60. Compare them side by side here.

Exterior & Styling
The V60 looks to be a modern interpretation of the wagon. It features the curvier new lines we’ve come to associate with Volvo in recent years, rather than the boxy Volvos that I grew up with, which were originally designed to accommodate a specific brand of Swedish washing machine, in its shipping box, back in the day. Its general shape is reminiscent of my adorable and much missed C30, though slightly elongated as if it has finished thinning out and maturing after college.

The V60’s back is instantly recognizable with Volvo’s now iconic vertical taillight design, skimming over the wagon’s waist and hips.

Eighteen-inch wheels are standard on the V60, and 19-inch wheels like the ones on my test car are optional, creating a meatier, more aggressive look.

How It Drives
Driving the Volvo V60 T5 AWD feels consistent with the Volvo ride quality I’ve come to love. It has just the right balance of a connected feel to the road without an overly tight suspension and an overabundance of road feel. I don’t want to feel every single nook and cranny in the road — rather, just enough to be in tune to the driving experience while still being comfortable. For those who like that sportier experience, opt for the $1,500 Sport Package on any of the T5 models, or upgrade to the T6 R-Design with sport suspension.

Volvo has equipped the Volvo V60 with an eight-speed automatic transmission and engine stop-start technology. One of the first things I noticed while creeping down the strip in Las Vegas before hitting the open road, this stop-start feature helps the V60 with the turbocharged 2.0-liter inline-four-cylinder engine achieve an EPA-estimated fuel economy of 25/37/29 mpg city/highway/combined (I averaged 31.5 mpg during my day of combined city, highway and country roads). While I certainly appreciate any available fuel savings, the stop-start technology felt like it could use a little work. When the engine stops, it’s almost unnoticeable. However, when creeping forward at a stoplight, for example, the engine kicks back on and jolts the car forward just a tad, with a rough, trucklike sound of a starting engine. Maybe I would get used to this over time if I were patient enough, but with so much of my daily driving creeping around, in a carpool lane, for example, more than likely I would opt to simply turn off the feature, using the button at the bottom of the center control panel.

My other surprise observation came on the highway during some wicked desert crosswind. While the V60 managed to dampen much of the road noise for a quiet ride around town, at highway speed wind noise around the A-pillars seemed intrusive. I’ve begun to appreciate and almost expect that luxury vehicles feature acoustic laminated glass for the windshield and front-door windows. If brands like Hyundai can do it at a lesser price, I would certainly expect this in a Volvo. For a brand that often defines luxury as simplicity, filtering out the chaos of ambient noise would seem to be a no-brainer. According to the V60’s product planner, laminated glass may be in Volvo vehicles in years to come as possible government mandates on this loom.

The Volvo V60 has three available drive modes: standard, Sport and Eco-plus. When switching into Eco-plus, Eco climate is activated, optimizing the climate system for fuel savings. Eco-coast is also activated, which will automatically switch the transmission into Neutral under certain conditions, for example when coasting down a slight decline above 35 mph. This system is seamless and unnoticeable unless you’re watching the rpm.

With the addition of a $1,500 Technology Package, which I wasn’t able to test, a camera watches for speed limit signs and transfers this information into the center of digital speedometer. Also included in the package is Lane Keeping Aid, which helps gently guide the car back into your lane should you veer out of it (as opposed to the obnoxious beeping that alerts you and your passengers to your poor driving skills as was previously in this system), automatic high beams, pedestrian and cyclist detection (more on this below in the Safety section) and adaptive cruise control with queue assist. Queue assist will take you all the way to full stop and then reactivate to follow the stopped car in front of you when it proceeds.

Interior
Jumping into the Volvo V60 for the first time feels like home. The interior is instantly familiar and consistent with the rest of the Volvo lineup.

The driver and front passenger seats are equally comfortable with plenty of lateral knee room, which my 6-foot-2-inch husband would appreciate, thanks to the slim center console and dashboard design. A small center console, floating center control panel with a storage area and in-door storage bins in all four doors create just enough space to store your in-car necessities while keeping the intended uncluttered look.

The backseat in the Volvo V60 has 33.5 inches of legroom, less than others in this class: The Acura TSX wagon has 34.3 inches of backseat legroom, and the BMW 3 Series wagon tops the group with 35 inches. While I didn’t have a chance to load my kids and their mega-sized backpacks into the V60, one of our family reviewers commented on the 2013 TSX Sport Wagon’s tight rear legroom here, so I fear even less space in the V60 might make it too small for my family. I’m envisioning constantly wiping footprints from the backs of the beautiful leather front seats.

While a moonroof over the driver and front passenger seats is standard in the V60, it feels a little tired and old-school when compared with the massive panoramic sunroof in the XC60, which is the smaller of Volvo’s two SUVs. Heck, even Kia’s putting a massive panoramic roof in the budget-friendly Soul.

Ergonomics & Electronics
The V60’s smooth, clean interior lines are uncluttered. Volvo’s floating center panel houses all of the audio and climate controls and has the same Bang & Olufsen-inspired controls that we’ve seen for years. I love the simplicity, with directional airflow buttons in the shape of a little seated human figure. Do you want air toward your head? Press the head. Air toward your feet? Press the feet.

This look may be changing soon as Volvo introduces its version of a connected-car system with a vertical smartphone-inspired touch-screen.

The driver’s digital instrument cluster can toggle through several themes using a button and dial on the turn-signal stalk. While this system keeps the look of the interior clean, the usability of the touch and turn to toggle takes some getting used to, and it’s definitely less user-friendly than a simple touch-screen setting. However, as an owner, you probably find your preferred setting and leave it there.

However, the V60 has a leg up over the TSX wagon with a 40/20/40-split folding rear seat, similar to that in the 3 Series wagon. This gives some added flexibility with seating and cargo configurations.

The Volvo V60 also features a flip-up panel in the cargo space with grocery-bag hooks and a useful elastic strap that can help contain and confine odd cargo. In addition, cargo nets extend from the rear seatbacks either over the cargo area or up to attach close to the ceiling above the backseat, cordoning off the cargo entirely.

Safety
Volvo has a lofty goal: By the year 2020, nobody should be killed or seriously injured in a new Volvo. In the meantime, the automaker is aggressively working toward this goal by adding new technologies into its vehicle lineup. Many innovative safety features are standard in the V60, and others are included in an optional Technology Package.

Standard City Safety uses a combination of cameras, radar and sonar technology to “watch” the road ahead and alert you if it determines a collision is imminent. Depending upon your speed and the speed of the car ahead, the City Safety system’s autonomous braking will bring the V60 to a complete stop to avoid a crash altogether, or decrease the severity of the crash.

Volvo’s Blind Spot Information System is a $900 option that includes front and rear parking sensors as well as cross-traffic and lane departure alert.

Integrated dual-stage booster seats in the two outboard seating positions are a $300 upgrade in the V60. These booster seats pop up into two different settings to accommodate children ranging from 30 to 80 pounds. Seat belt buckles that are on stable bases should make buckling up easy for little ones in boosters with limited dexterity.

Installing child-safety seats using the lower Latch anchors, however, still has not improved in this new Volvo. The anchors are deep within the seat bight, making them difficult to access, particularly if your car seat doesn’t come equipped with a rigid Latch connector system. This is something I’ve been baffled by during my 10 years in this industry. Volvo is synonymous with family safety, and the company was a pioneer in Latch adoption, yet ease of accessibility to the lower anchors is consistently overlooked.

Value In Its Class
The sport wagon seems to be making a comeback, with the Volvo V60 joining the ranks of the BMW 3 Series wagon, Acura TSX Sport Wagon, Audi Allroad, Volkswagen Jetta SportWagen, Subaru Outback, Mercedes-Benz E-Class wagon, Cadillac CTS Sport Wagon and more. I, for one, am thrilled! Wagons provide the carlike ride that many of us appreciate with the cargo-hauling versatility of a crossover or SUV.

The Volvo V60 has an edge over the others with Volvo’s long-standing heritage of innovative safety features behind it, blended with a calm, uncluttered interior. The V60 has also been built to haul, with the ability to tow up to 3,300 pounds.

However, over the past few years, the car brand has had various owners and lost track of its message of heritage based in automotive safety. Did you know Volvo was the first implementer of the three-point seat belt as we know it today? Can this small-volume company find its way back to its flagship wagon and its message of safety while still designing a car to appeal to today’s highly demanding modern consumer? We shall see.