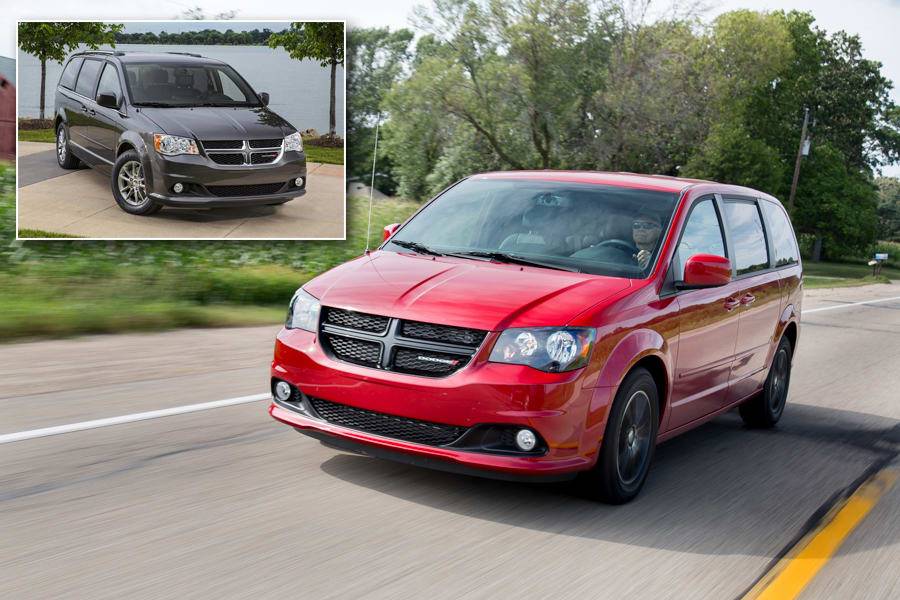 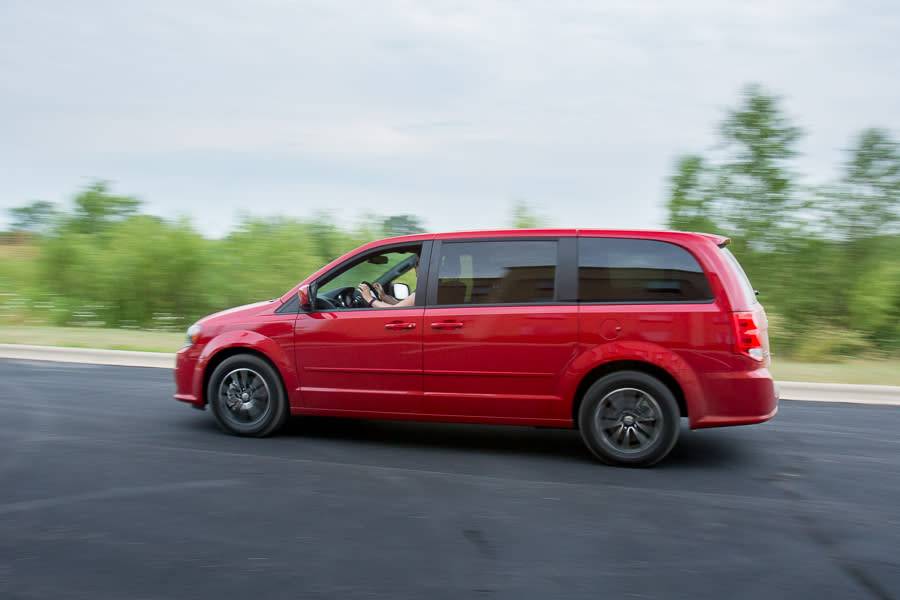 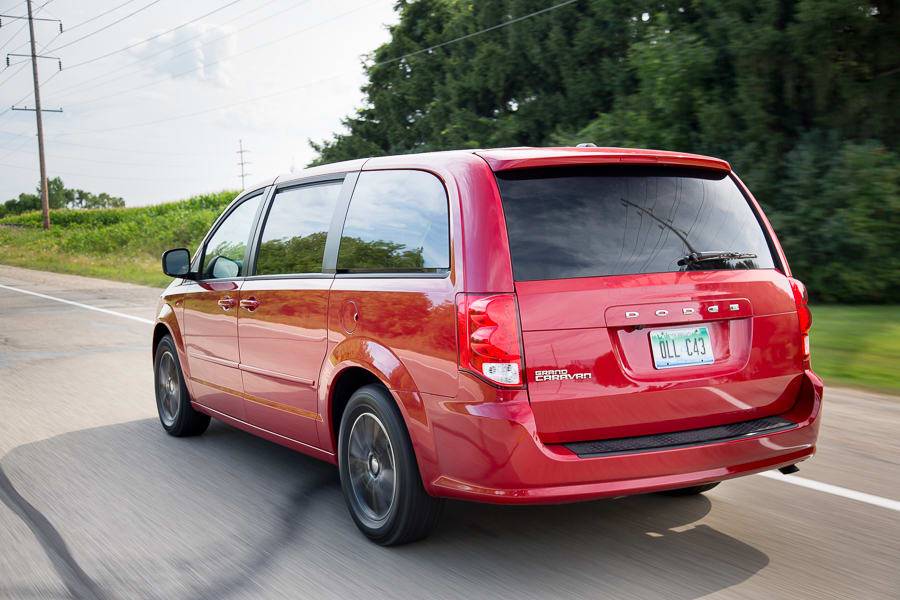 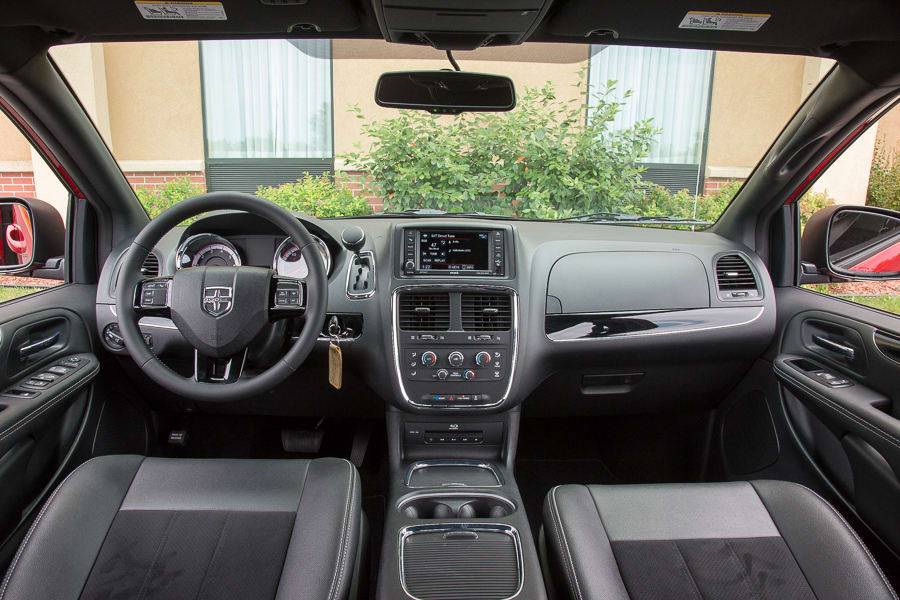 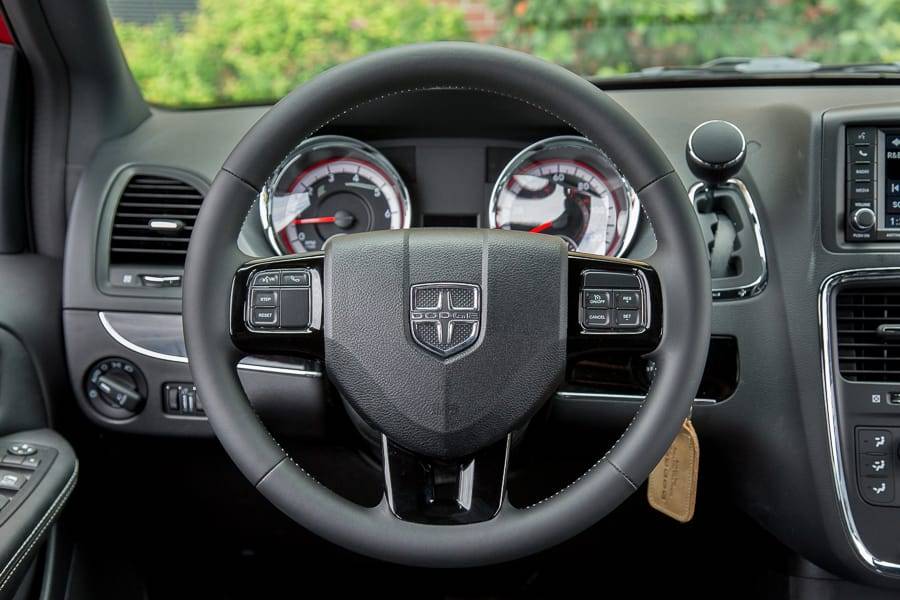 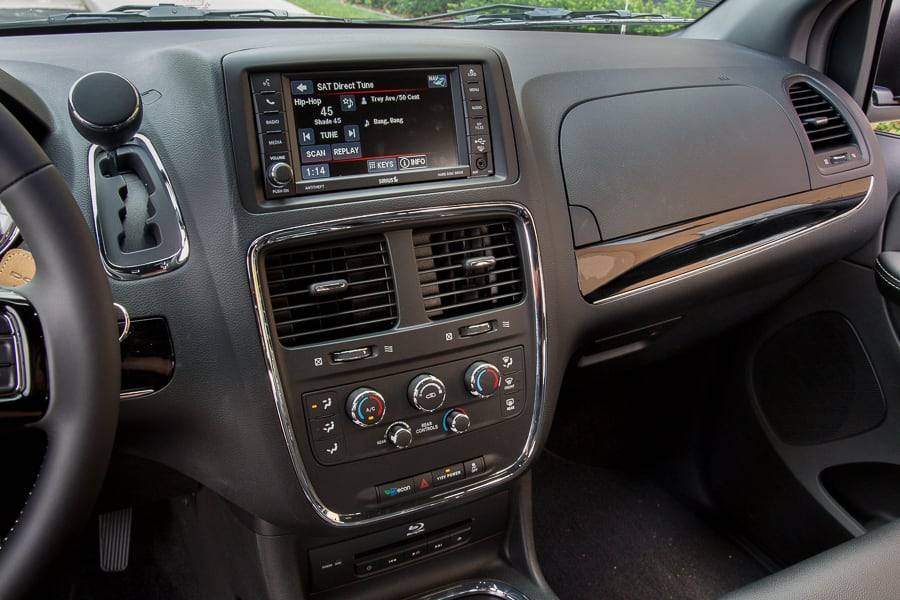 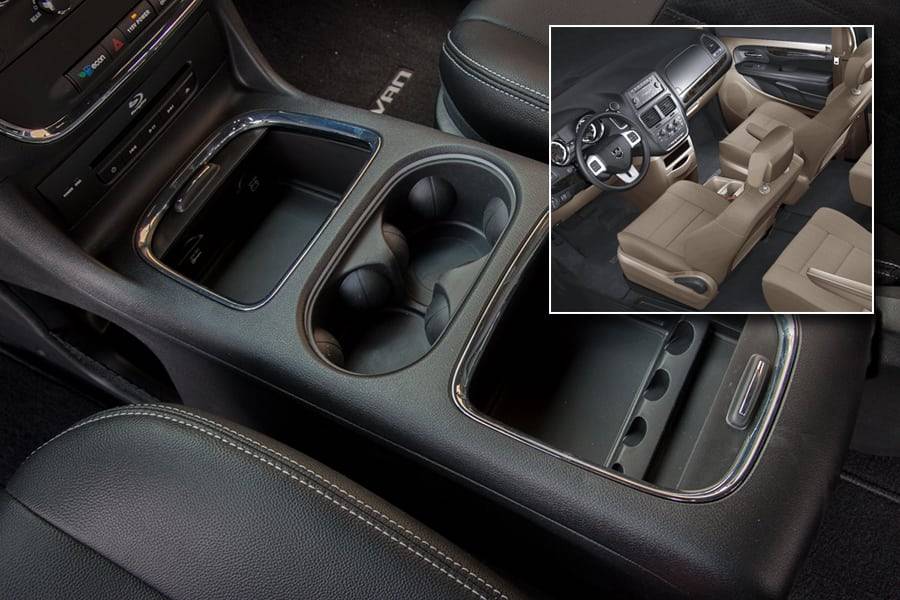 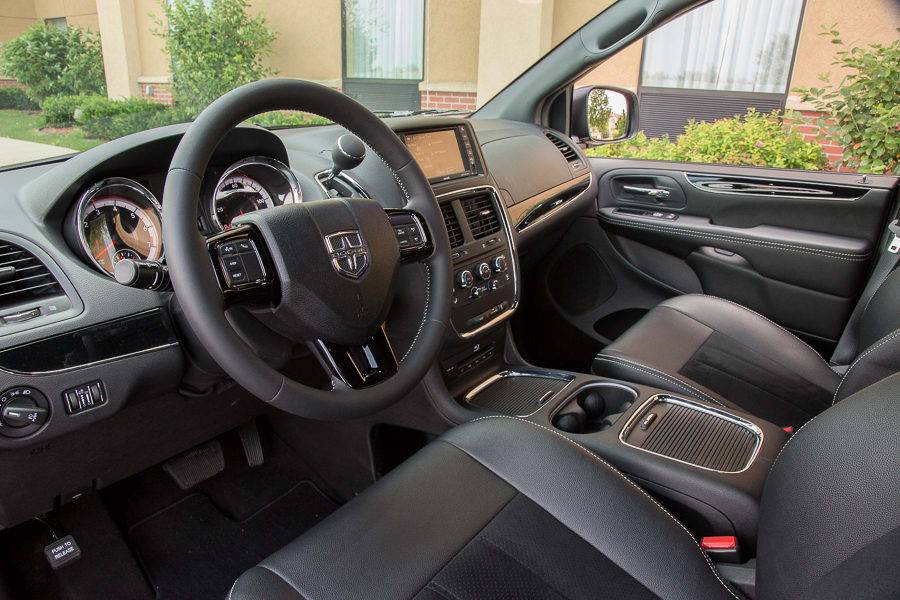 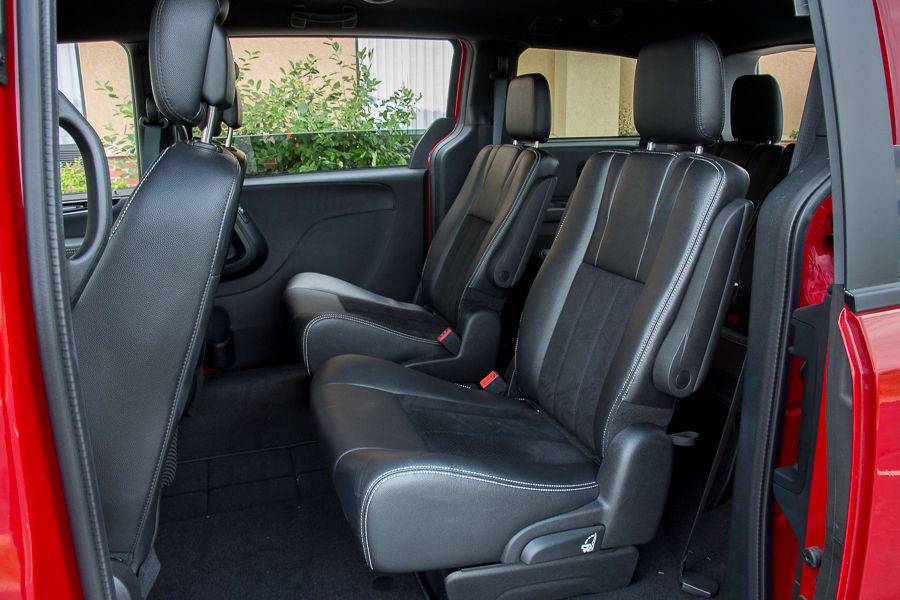 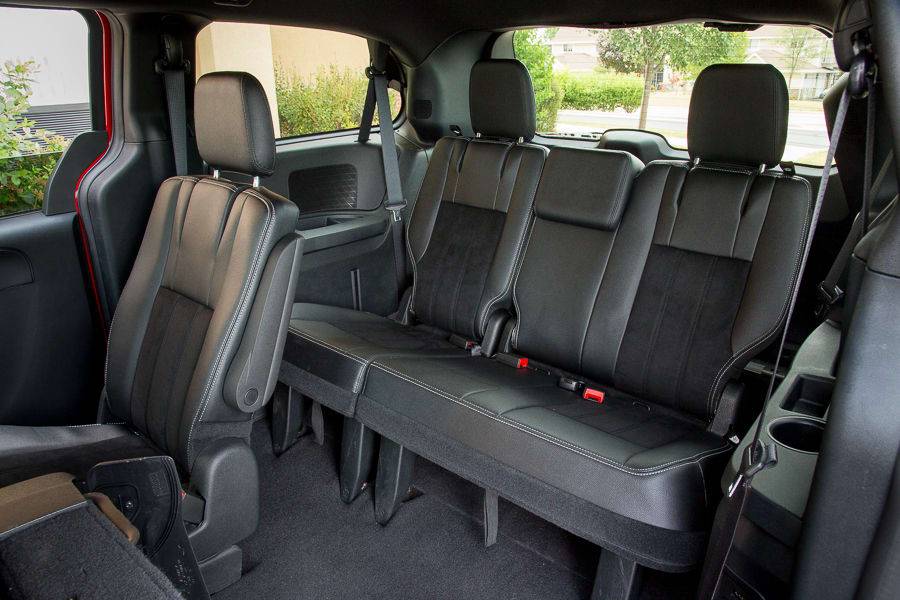 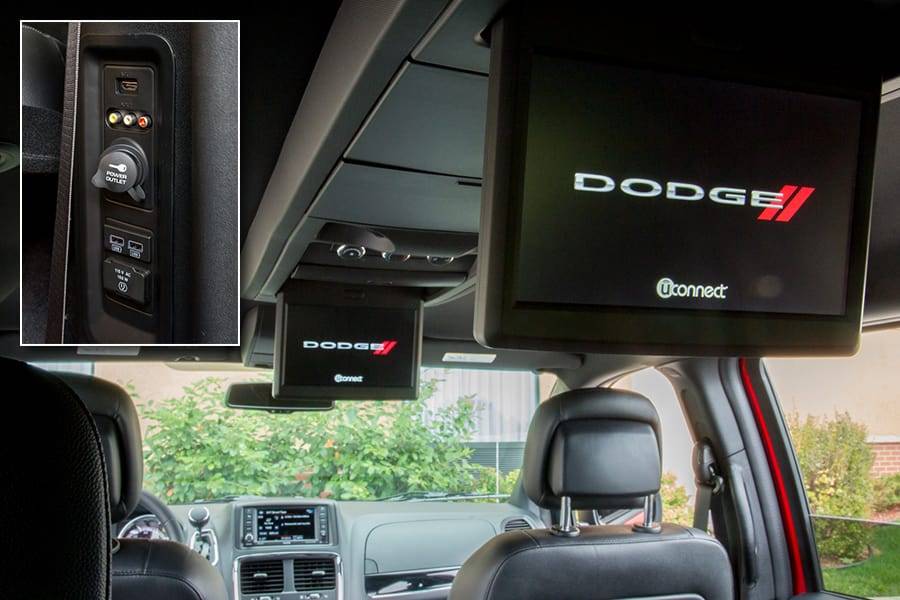 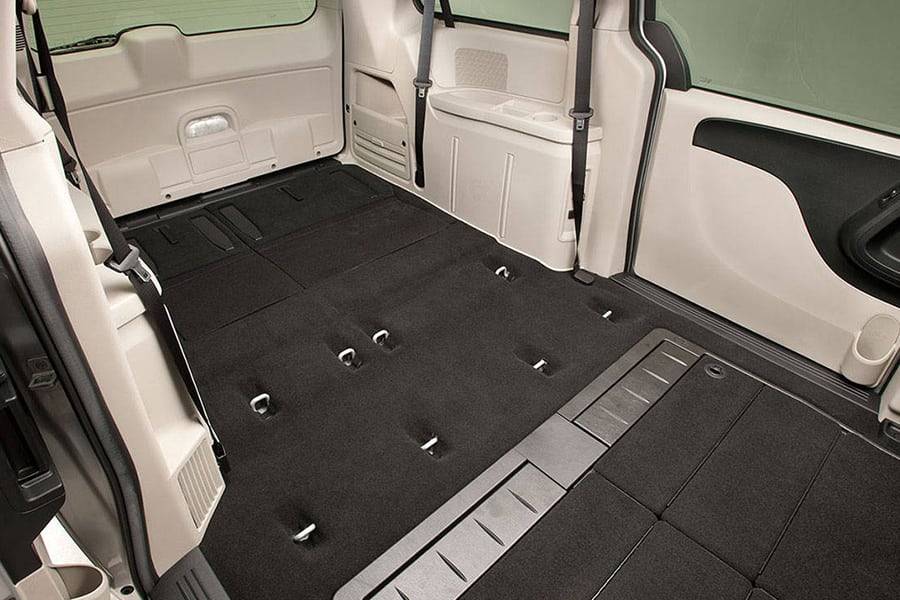 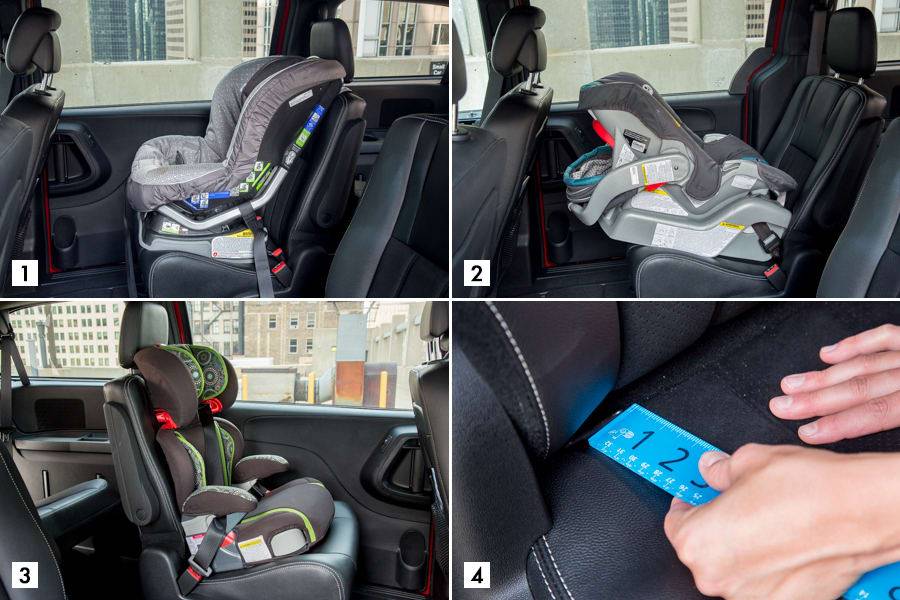 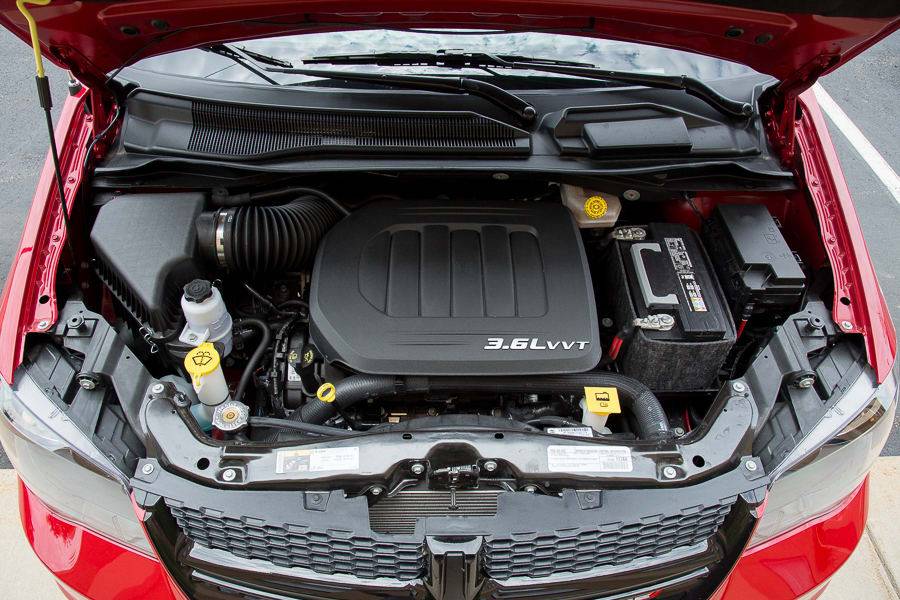 Editor’s note: This review was written in October 2015 about the 2015 Dodge Grand Caravan. Little of substance has changed with this year’s model. To see what’s new for 2016, click here, or check out a side-by-side comparison of the two model years.

The 2015 Dodge Grand Caravan boasts workhorse utility and value, but drivability problems and poor crash tests might send you elsewhere.

We tested a 2015 Grand Caravan in Cars.com’s Ultimate Minivan Challenge, which you can read here. A corporate twin to the Chrysler Town & Country (Dodge and Chrysler are both brands of Fiat Chrysler Automobiles), the Grand Caravan comes in an economy-priced American Value Package, as well as SE, SXT and R/T trim levels. Compare them here. Beyond some new packages, little has changed for 2015 (compare the 2015 and 2014 Grand Caravan here). We drove an SXT.

Exterior & Styling
FCA’s styling mantra is simple: It’s a minivan, stupid. Minivan-makers have been trying to rethink the box for decades. The Grand Caravan’s embrace of the box, complete with straightforward lines and simple lighting, is either refreshing or boring, depending on your perspective.

AVP and SE models look the part of their bargain-bin price tags, with black side mirrors and 17-inch steel wheels with plastic covers. Higher trims have 17-inch alloys and body-colored mirrors.

How It Drives
Pronounced accelerator lag gives the Grand Caravan tentative, inconsistent power off the line, especially in stop-and-go traffic. It’s noticeable even when you’re already in motion. Toe the pedal for more power and nothing happens for a moment. We’ve observed accelerator lag across the auto industry for more than a decade, but the Grand Caravan and Town & Country are as laggy as they come.

Once power actually shows up, the Grand Caravan’s 283-horsepower V-6 delivers a respectable punch, helped along by adept shifts from the six-speed automatic transmission. Ride quality is soft, and from an isolation standpoint it keeps the cabin disruption-free — an attribute that rival Honda Odyssey, for one, can’t claim. But the Dodge’s suspension sorts through bumps with a lot of clumsy rumble. It’s hardly a controlled experience, and other judges in Cars.com’s minivan comparison also found it too noisy. The Grand Caravan R/T has a sportier performance suspension, but we haven’t driven it recently.

Accelerator lag isn’t the only problem. The SXT pitches into corners like most minivans, but steering feedback is all kinds of wonky. The wheel turns with a light, predictable touch initially, but grows suddenly heavier as you rotate through turns. Upon release, it whips back to center with unnatural speed. I never got used to it, even after days of driving.

The Grand Caravan’s disc brakes have strong, linear pedal feel, and our test car’s observed 23.9 mpg beat out four other minivans in a 135-mile mileage loop. This was despite the EPA’s so-so gas mileage rating of 20 mpg combined, which is 1 or 2 mpg short of many rivals.

Interior
The cabin has its moments — namely, excellent visibility and quality materials where it counts — but a lot of misses. FCA’s optional Uconnect touch-screen multimedia system is an outdated version and a mess (details in the next section). SXT and R/T models have a bulky, flow-through “super console” that protrudes from the dash between the front seats. It lends a more cockpit-like feel (because that’s what minivans need?) but eliminates the knee clearance and easy floor storage found in the Grand Caravan’s AVP and SE trims, as well as in several competitors. The console is not, in fact, super.

A three-seat third row is standard. Seating in the second row can be a two-passenger bench or collapsible Stow ‘n Go captain’s chairs. The vast majority of Grand Caravan trim levels have the latter setup, and either way total seating capacity is seven. (If you need an eighth seat, some minivans offer one.) We haven’t evaluated the Grand Caravan’s bench seat, but the Stow ‘n Go chairs are thin on padding — likely a tradeoff for the fact that you can fold them into floor cavities. They also tumble forward for easy third-row access (see it scored here), and both the second and third rows have decent headroom and legroom.

Cargo & Storage
If you opt for the Stow ‘n Go chairs, both your second and third rows will collapse into floor cavities, giving you one of the few minivans on the market that enables maximum cargo room without having to remove the second-row seats. With all seats stowed, the Grand Caravan can store 143.8 cubic feet of cargo. That’s in the neighborhood of the Odyssey and Sienna (148.5 cubic feet and 150 cubic feet, respectively), albeit just short of both. Go here to see a cargo version of the Grand Caravan that’s sold through FCA’s Ram division, which we cover separately on Cars.com.

Ergonomics & Electronics
A CD stereo with steering-wheel audio controls is standard. Optional on the SXT and standard on the R/T is FCA’s Uconnect 6.5-inch touch-screen stereo, with optional navigation. R/T models get a subwoofer-equipped premium stereo. Still, Uconnect’s smallish screen, outdated graphics and unintuitive controls are uncompetitive. FCA has gone well beyond this in its later-generation Uconnect systems in all regards, including one of the largest touch-screens around; it’s past time the minivans caught up.

By contrast, the rear entertainment options are world-class. At the highest option level, there are two 9-inch overhead screens that can play separate content, from an HDMI input to Blu-ray discs. It’s an advantage over the widescreen systems in the Odyssey and Sienna, which can play two sources only side-by-side on the same screen. That’s distracting at best and could allow a cartoon-watching toddler to see a shoot-’em-up video game his teenage sibling has booted up.

For their own devices, rear passengers also get two USB charging ports and a 115-volt household outlet rated at 150 watts. That should be enough for a current game console, but it’d be best to check before investing in this expensive option.

Safety
In a family segment like minivans, the Grand Caravan’s largest drawback is crash tests. It earned a rating of poor (from a possible good, acceptable, marginal or poor) in the Insurance Institute for Highway Safety’s small overlap front test, which simulates an impact from the front-left corner of the car. The Grand Caravan earned good IIHS scores otherwise, but the small overlap test is a big differentiator from the rest of the segment. Minivans from Honda, Toyota and Kia all scored acceptable or good in this test.

A backup camera, widely standard in this class, isn’t available until the SXT trim, where it’s optional, and the R/T, where it’s standard. A blind spot warning system is optional on the R/T, but lane departure and forward collision warning systems — both widely offered in minivans and SUVs — are unavailable.

Click here for a full list of safety features or here to see our Car Seat Check.

Value in Its Class
The Grand Caravan hits value on the head; the AVP starts at an outrageously cheap $22,790, including a destination fee. That’s more than $4,000 less than all major competitors. “American Value,” however, translates to meagerly equipped. You can step up to an SE Plus for crowd-pleasing family conveniences (Bluetooth, power windows, captain’s chairs and rear air conditioning) for a still-inexpensive $26,240. At the other end, a loaded R/T tops out around a modest $38,500.

Does that make it a good choice? Sure, if savings are your only goal. But other qualities matter, and on the whole the Grand Caravan falls short in a lot of areas — including reliability, where the current generation has a spotty history. This minivan is long in the tooth, dating back to 2008 since its last full redesign, and FCA reportedly wants to consolidate its minivan twins into one model going forward. Whatever it becomes, it needs to compete in more ways than just price.