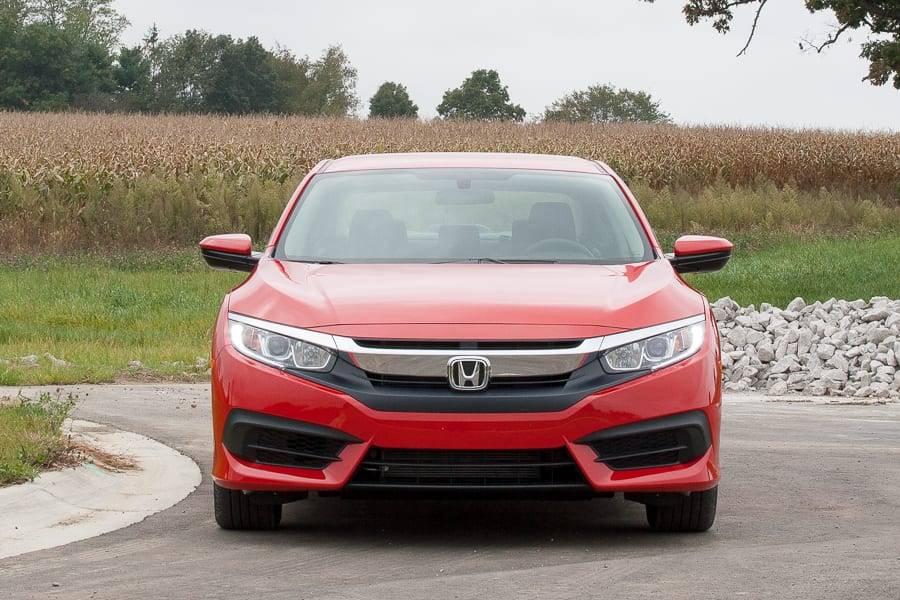 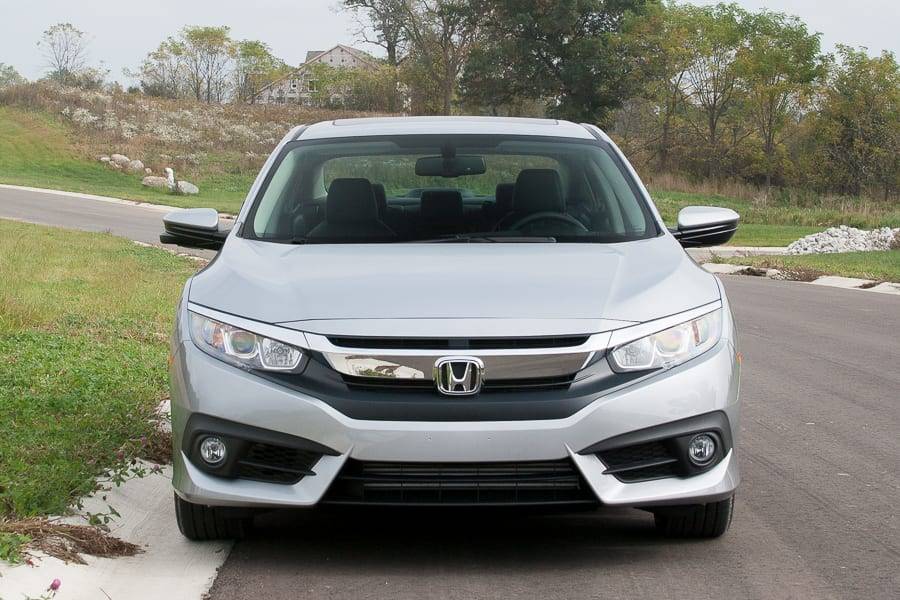 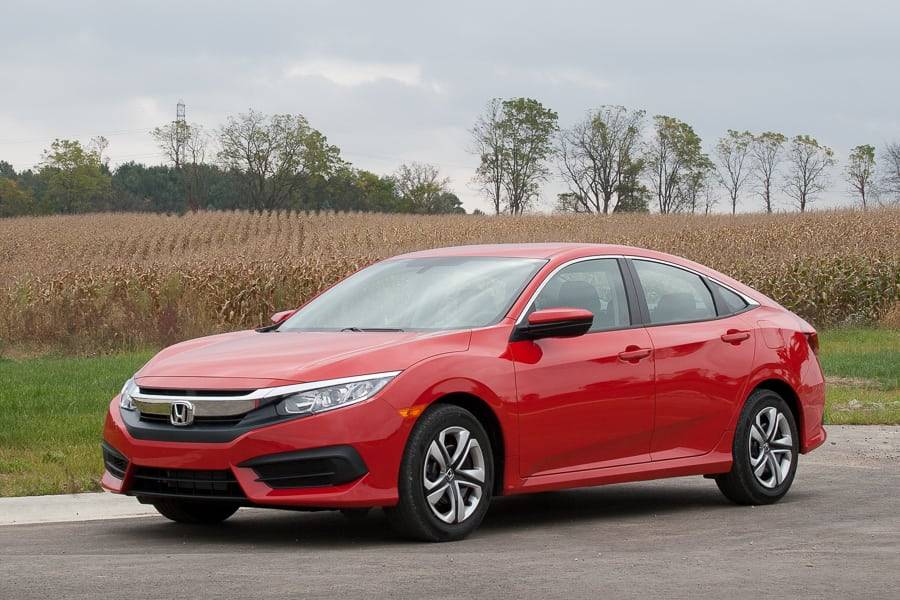 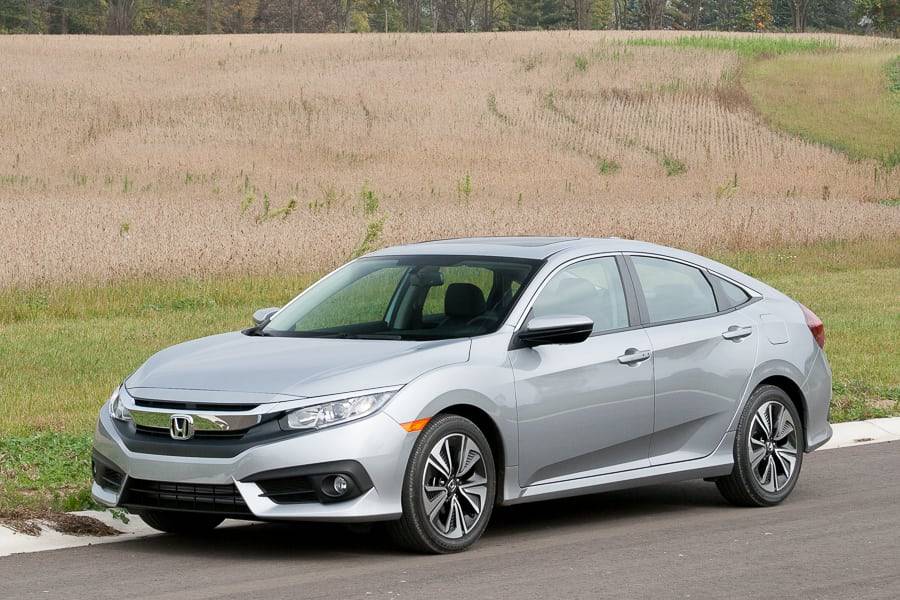 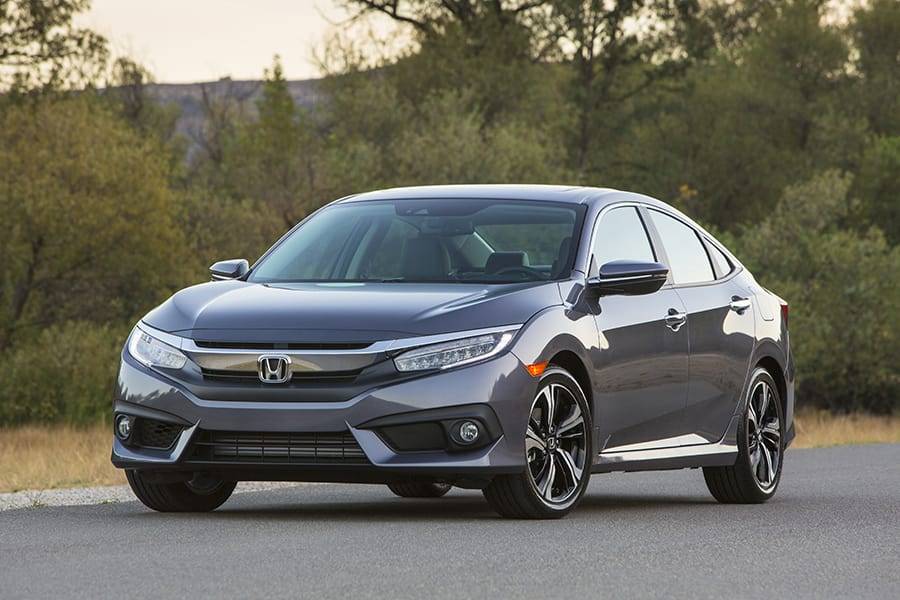 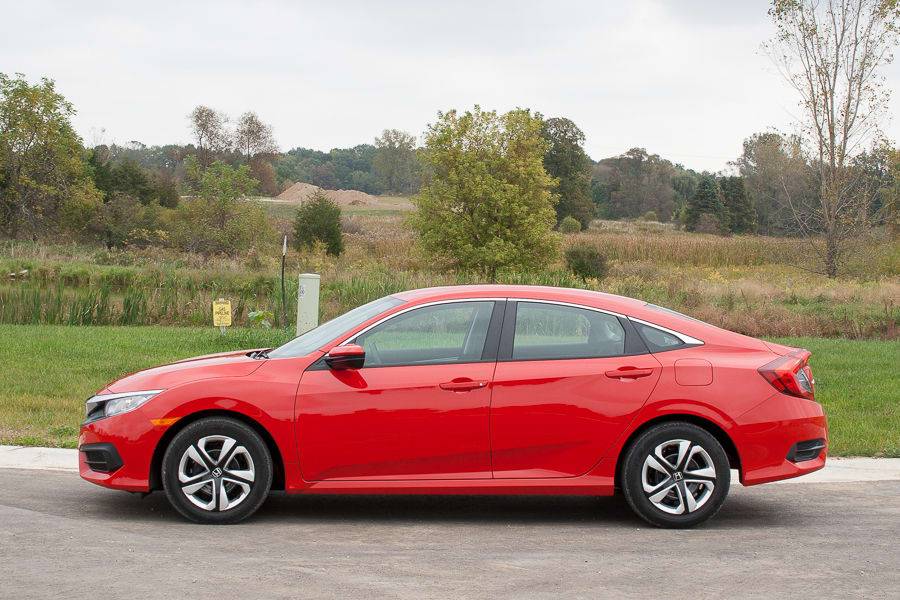 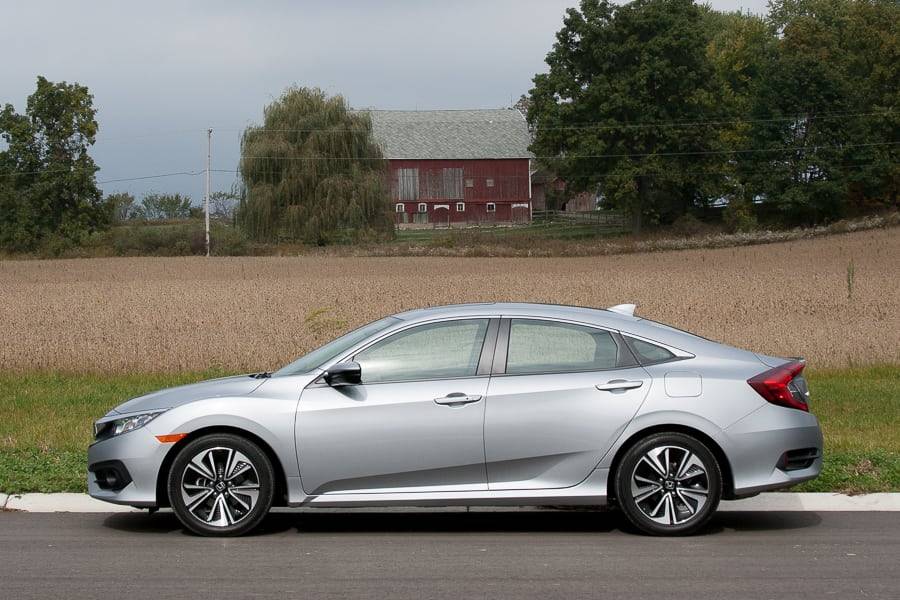 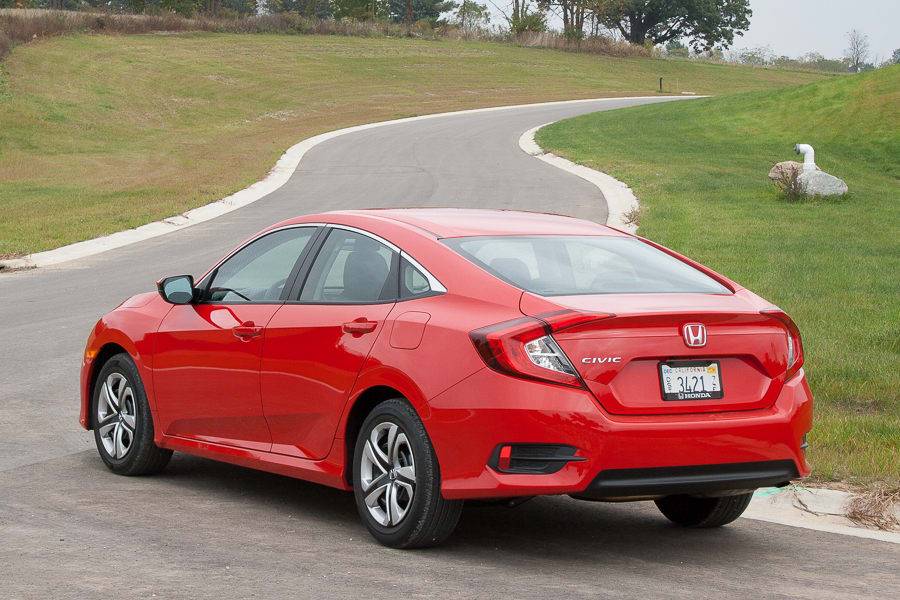 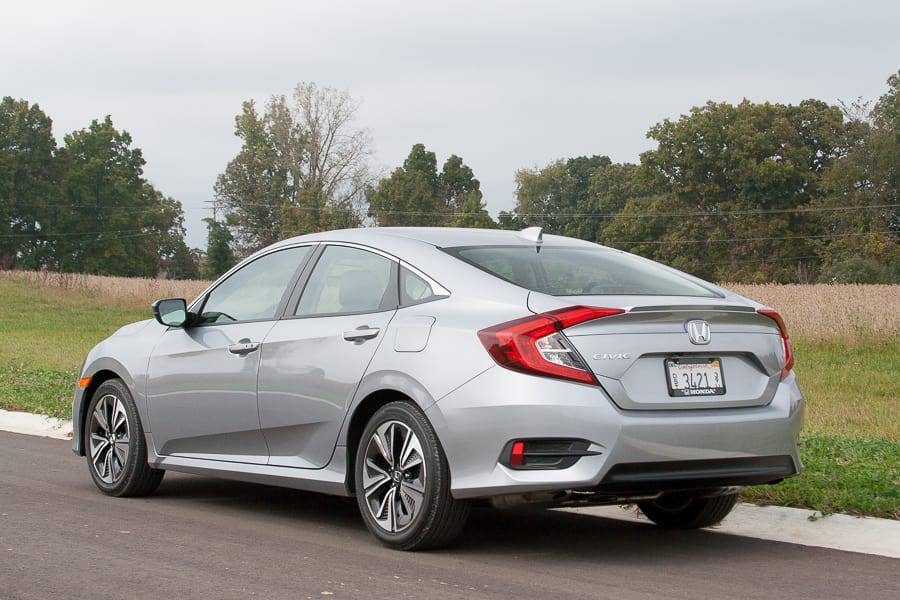 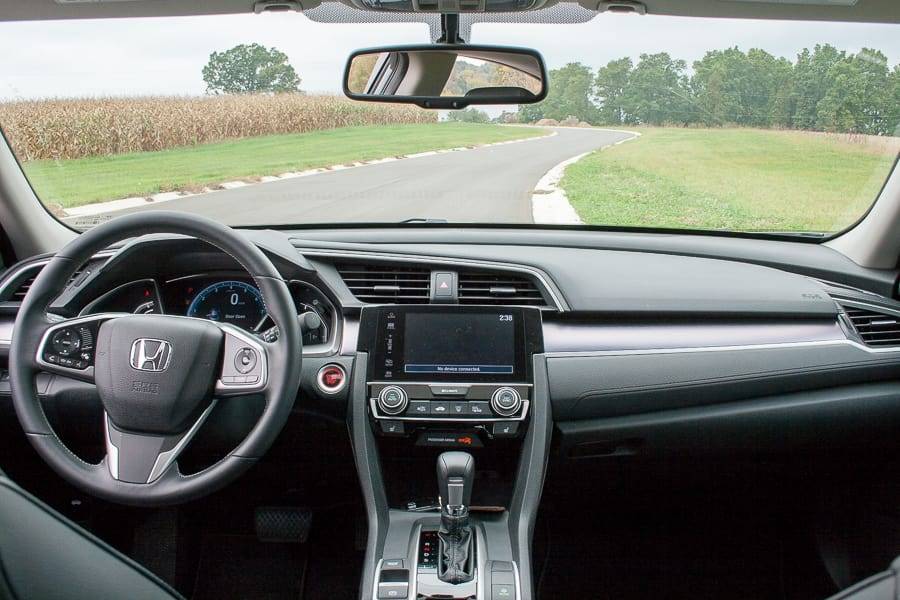 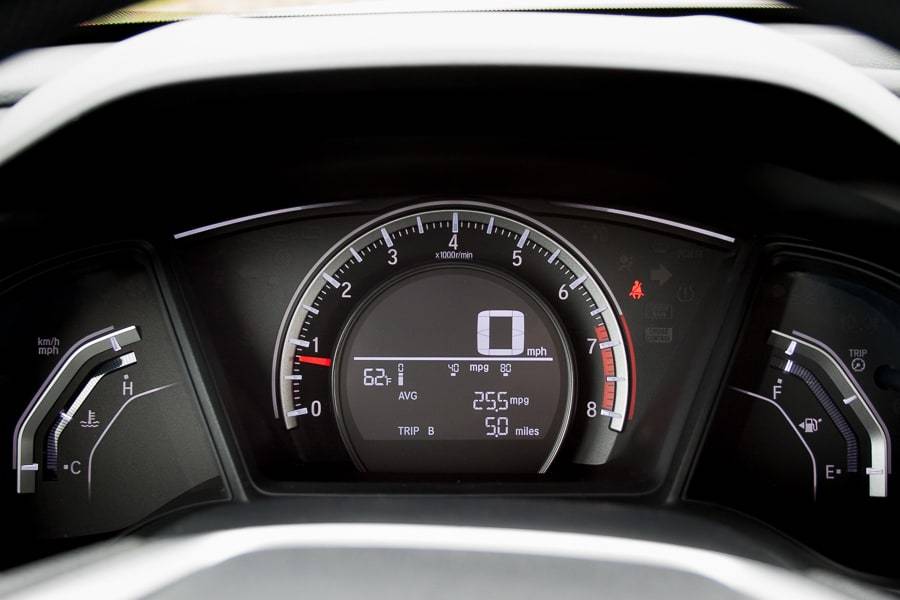 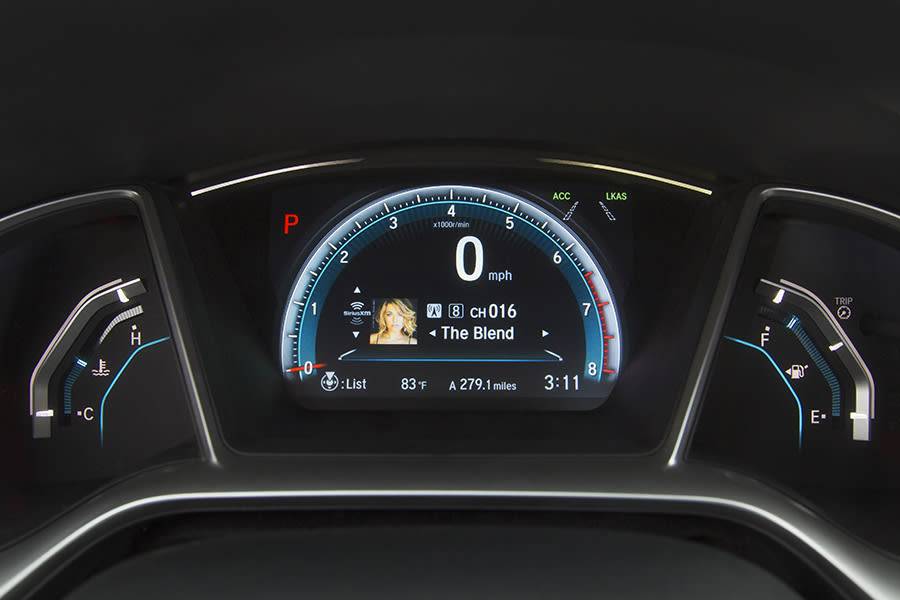 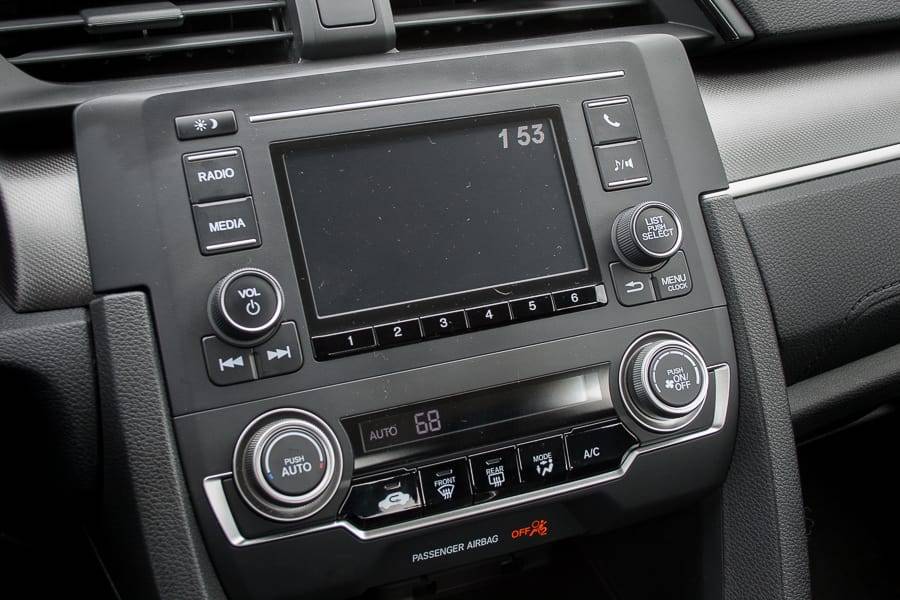 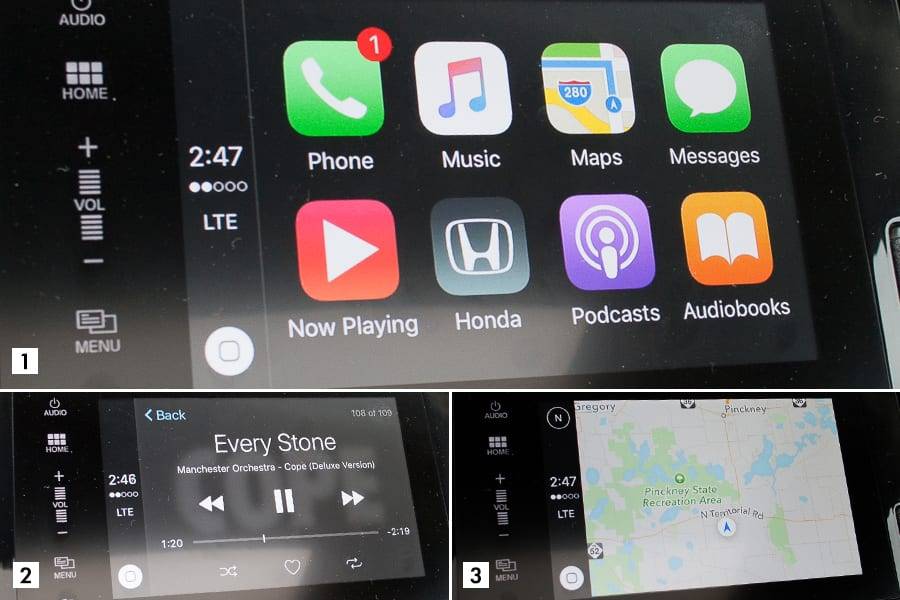 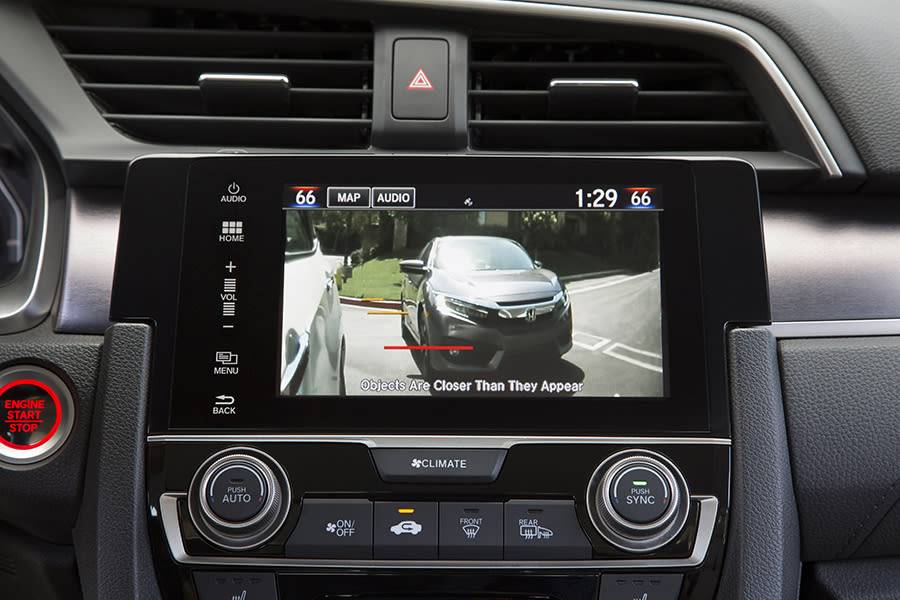 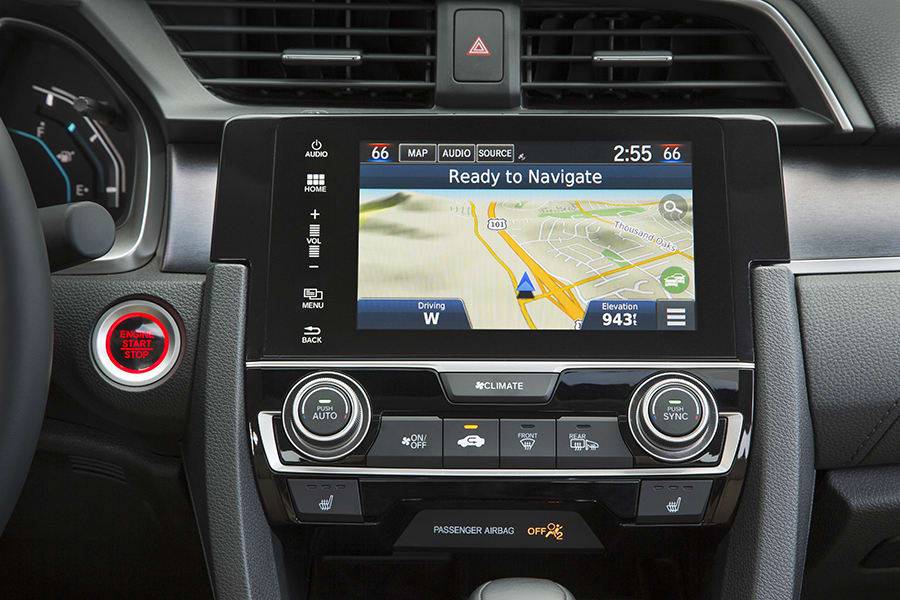 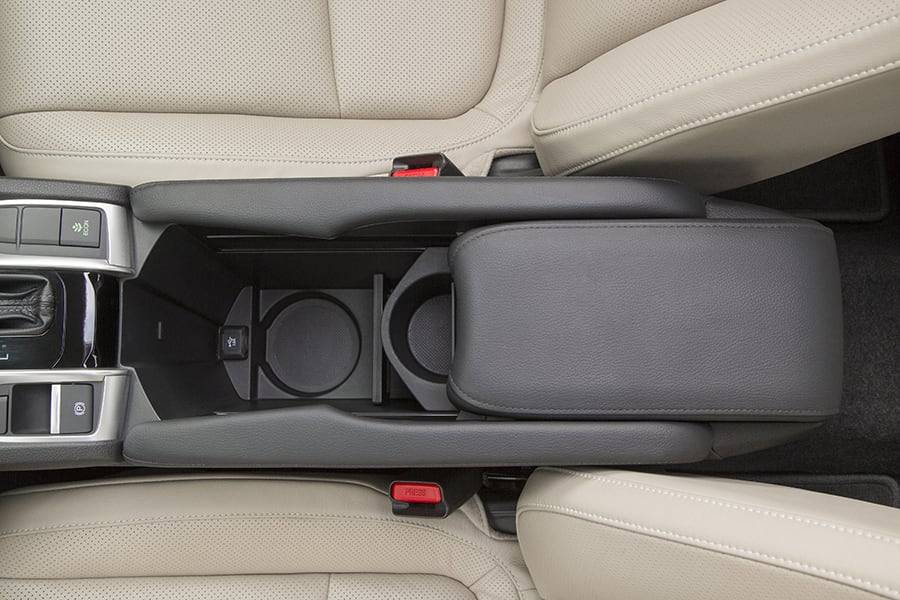 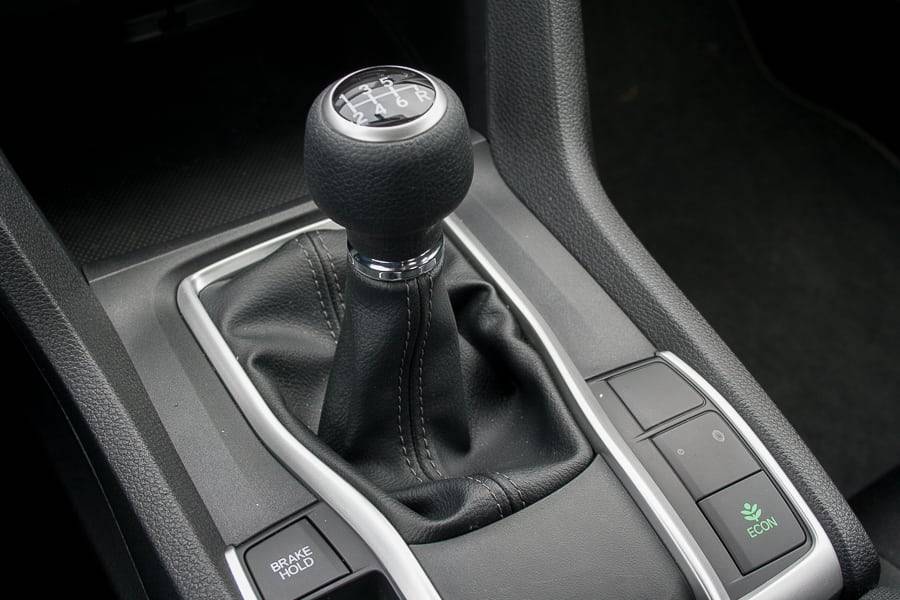 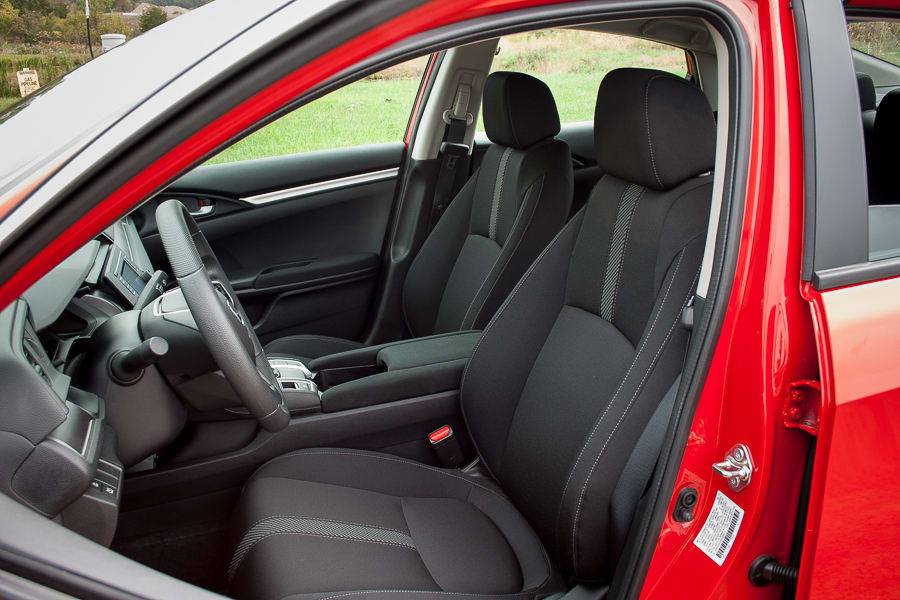 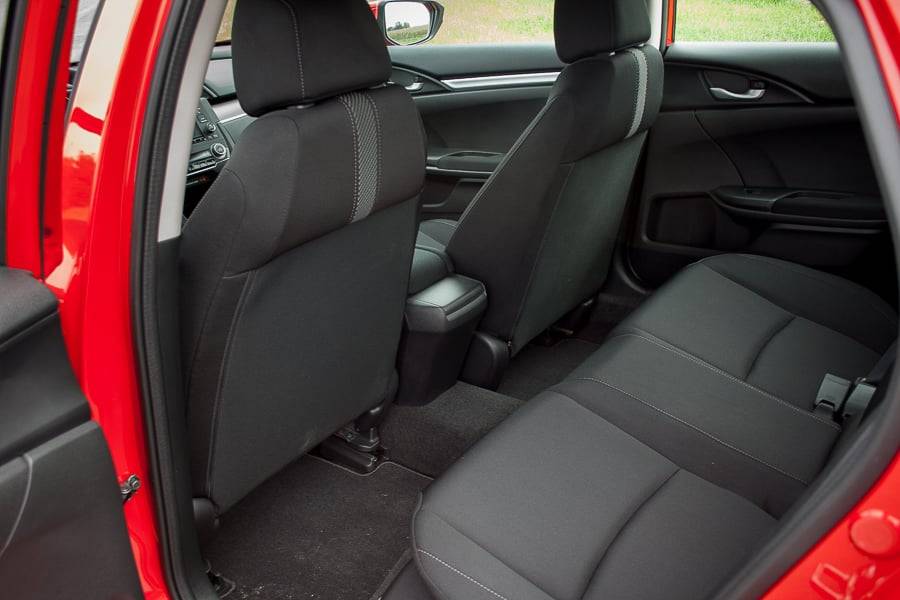 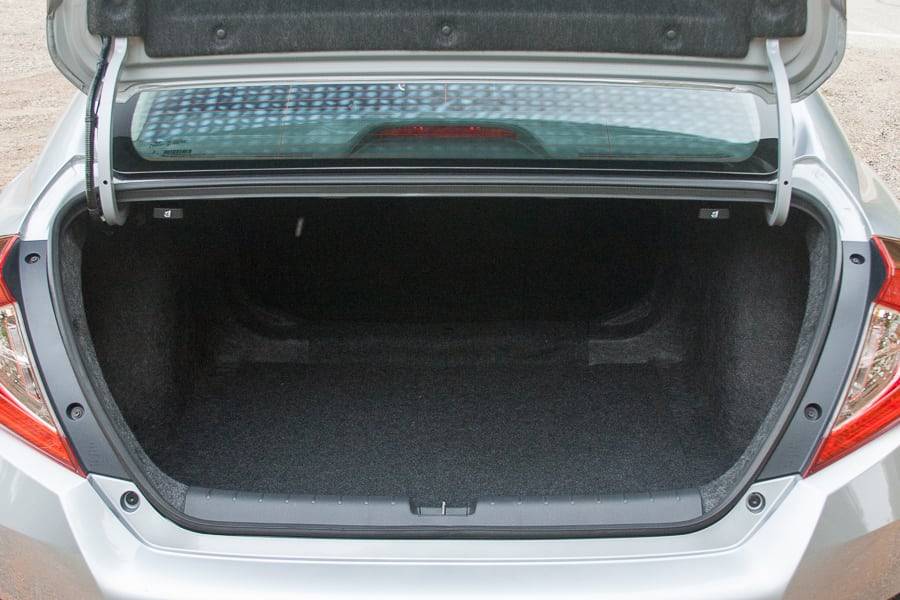 Criticized for an austere redesign of its Civic compact car a few years ago, Honda has responded with an all-new 2016 Civic that’s entertaining to drive, has a premium feel and offers advanced active safety features.

The 2016 Civic rides on an all-new platform that will be used for all Civics sold around the world, and the U.S. version is powered by two new four-cylinder engines, including a turbocharged one that’s available in uplevel trims.

The sedan hits dealerships first in November, and it will be followed by coupe and hatchback body styles. Eventually, performance-oriented Si and Type-R trim levels will be offered. I tested three versions of the sedan: the base LX with the standard six-speed manual transmission ($19,475), the midlevel EX with a continuously variable automatic transmission ($21,875) and an EX-L version with navigation and the available turbo 1.5-liter engine ($25,535; all prices include a destination charge of $835).

Exterior & Styling
Honda hinted at a new, sportier styling direction for the Civic when it showed the Civic Concept coupe at the New York International Auto Show earlier this year, and the production sedan carries forward many of the concept’s design cues such as a prominent grille and an aggressively styled front bumper — even on the base LX trim.

The one aspect of the front-end styling that’s a little off-putting is the swath of matte-gray plastic just below the grille. It’s on all versions of the sedan — even the top-level Touring — and it looks a little low-rent on an otherwise upscale design that incorporates standard LED daytime running lights. A glossy piano-black finish — at least on higher trim levels — is in order.

The 2016 Civic has grown in size, and you can tell from just looking at it. The sedan is almost 3 inches longer and 2 inches wider than before but nearly an inch lower at the roofline. The changes give the car a nice stance, and a shorter front overhang improves its proportions.

The Civic’s most dramatic — and potentially polarizing — styling element is its new rear end, which includes swept-back roof pillars that flow into the upper portion of the C-shaped taillights. The look is reminiscent of BMW’s 3 Series Gran Turismo; while that car is a hatchback, the Civic has a conventional trunk.

How It Drives
The new Civic’s ride and handling performance is impressive. Honda has managed to create a car that feels both sportier and more refined than its predecessor. Emphasizing one aspect often sacrifices the other.

The more responsive driving experience is apparent immediately. The car hunkers down in sweeping corners, and body roll is well-controlled. Steering is direct and responsive with decent feedback, and at highway speeds the car feels stable. The Civic’s responses encourage you to push it harder while tackling a winding backroad rather than tell you to back off, as a lot of compact cars do.

Ride quality remains on the firm end of the spectrum, as is typical of Honda, but suspension responses over bumps and pavement breaks is much less brittle than before. It feels premium, like a Mazda3, and Honda says new hydraulic bushings in the suspension deserve much of the credit.

LX and EX trim levels are powered by a new 158-horsepower, 2.0-liter four-cylinder. The engine provides quick-enough acceleration most of the time, but it has limited reserve power for high-speed passing, resulting in more noise than actual acceleration from the engine. It’s not a particularly pleasant engine noise, either.

The LX is the only trim level that currently offers a manual transmission; all the other trims use a CVT. The six-speed manual’s shifter slips from gear to gear with a light touch, but it’s not as precise as a Mazda gearbox. It’s easier to get the most from the Civic’s 2.0-liter four-cylinder with the manual as opposed to the CVT. EPA-estimated gas mileage is 27/40/31 mpg city/highway/combined with the manual.

The available CVT is mostly unobtrusive and accelerates the car smoothly. Hard acceleration brings on a persistent engine drone, which is common with CVTs, but the transmission is also responsive and, when cruising, can quickly increase engine rpm when more power is needed. The console gear selector includes an S mode, which keeps engine rpm higher for better performance. The CVT is more efficient than the manual with 31/41/35 mpg estimates.

EX-T, EX-L and Touring trims get the 174-hp, turbocharged 1.5-liter four-cylinder engine — the Honda brand’s first turbocharger in the U.S. Honda says a manual transmission eventually will be offered with this engine, but right now it’s available only with the CVT.

The turbo four-cylinder is quieter than the 2.0-liter engine and produces more refined sounds. It also packs a stronger midrange punch thanks to more torque at lower engine rpm. Compared with the 2.0-liter engine, the overall performance improvement is noticeable, but not dramatic. It’s slightly more efficient, too, with an EPA rating of 31/42/35 mpg.

Honda has also improved the braking system, which now has standard front and rear disc brakes. The brake pedal has a nice, firm feel when you step on it, and linear stopping performance means you don’t have to give too much thought to bringing the car to a smooth stop.

Interior
The cabin has a new dashboard with a symmetrical design that’s a departure from the prior Civic, in which the control panel was centered in the dashboard but angled slightly toward the driver. It also adopts a new instrument panel that does away with the stacked digital speedometer and tachometer, which has been a Civic design element for about a decade. The speedometer is still digital, but now it appears inside the arc of the tachometer.

The Civic has soft-touch surfaces on the front doors’ upper sections, which make for a more comfortable spot to rest your arm, but I wish Honda would have found a way to use material like this in more places, such as for the hard-plastic center control panel that my knee kept bumping. While the cabin has an entirely new design, overall materials quality is similar to the prior Civic.

Along with lowering the Civic’s roofline, Honda has lowered the driver’s seat about an inch. The standard manually adjustable driver’s seat includes a height adjustment, so if you prefer to sit higher when driving, you still can. The seats are a little softer than the Honda norm, but overall comfort is good and side bolsters hold you in place when cornering. Power-adjustable, heated leather seats are available.

The backseat is big enough to carry adults comfortably. The Civic’s wheelbase is 1.2 inches longer, and backseat legroom increases by the same amount. The seating position is comfortable, and I had plenty of headroom and space between my knees and the back of the front seat (I’m 6 feet 1 inch tall). It feels like you’re sitting in a midsize sedan, it’s that roomy. There’s now a small hump in the center of the floor (the prior Civic had a flat floor). Honda says it let the automaker tuck the exhaust system higher for a more aerodynamic underbody.

Ergonomics & Electronics
LX models have a 5-inch dashboard screen for the stereo and standard backup camera, but all other Civic trim levels have a 7-inch touch-screen. Moving up to the larger screen deletes knobs for stereo volume and tuning. Touch-sensitive controls alongside the screen adjust volume, and radio tuning moves to the touch-screen itself. I prefer a knob to this approach, and I wish the uplevel audio system had retained them.

The CarPlay setup process is straightforward and took just a few minutes. Apple’s approved apps include Phone, Music, Maps, Messages, Podcasts and Audiobooks, but the functionality of some apps has been modified for in-car use. Messages, for one, is driven by voice commands as opposed to keyboard input, and incoming messages are read aloud through the car’s speakers rather than appearing on the screen.

I noticed some lag when switching between apps within CarPlay, but I was using an older iPhone 5c. Honda said a newer phone will speed things up slightly, but if you’re concerned about screen lag be sure to test CarPlay or Android Auto with your own phone during a test drive.

All trim levels have Bluetooth connectivity for hands-free phone use and audio streaming, Pandora internet radio integration and a USB port. EX and higher trims add a second USB port, and a navigation system is available for the EX-L trim and included with the Touring model.

Cargo & Storage
The Civic has a new center console with a deeper storage bin for extra-tall cups and bigger items. It also includes a movable tray and sliding cupholders. Honda says the switch to a standard electronic parking brake in lieu of a space-robbing brake lever led to this new console, which is one of the more useful ones in the compact-car segment.

The new Civic sedan has a larger trunk than its predecessor and one of the larger ones in its class; it measures 15.1 cubic feet compared with 12.5 cubic feet for the prior-generation Civic sedan. LX models have a single-piece folding backseat, but EX and higher trims get a 60/40-split folding rear seat.

Safety
The Civic hasn’t been crash-tested by the Insurance Institute for Highway Safety or the National Highway Traffic Safety Administration as of publication.

The optional Honda Sensing system bundles a number of active-safety features including forward collision warning with automatic braking, lane departure warning and prevention, and adaptive cruise control with low-speed follow. Low-speed follow will automatically bring the Civic to a complete stop, if necessary, and it will resume following the car ahead when the driver presses the steering wheel’s Set or Resume cruise-control buttons or taps the gas pedal. The system is available for $1,000 on all Civic trims except the Touring, where it’s standard.

EX and higher trims include Honda’s LaneWatch system, which uses a wide-angle camera on the right-hand side mirror to display what’s next to the car on the dashboard touch-screen. Properly adjusted side mirrors can eliminate most blind spots, but LaneWatch provides an extra measure of safety and is useful for making the driver aware of approaching bicyclists that might otherwise be missed. I didn’t have a chance to drive the Civic when it was dark outside, but I’ve tested LaneWatch in a Honda Fit at night and found that low-light conditions make the camera’s view much less useful.

Value in Its Class
The Civic has long been a dominant force in the compact-car segment, but the competition has gotten remarkably better in recent years. That’s forced Honda to completely re-evaluate the Civic in a bid to keep pace, and the resulting 2016 Civic sedan does that and more. Car buyers who’ve been happy with previous Civics should still like this redesigned version, and its newfound premium, fun-to-drive personality gives it a chance at impressing consumers who wouldn’t have looked very long before.