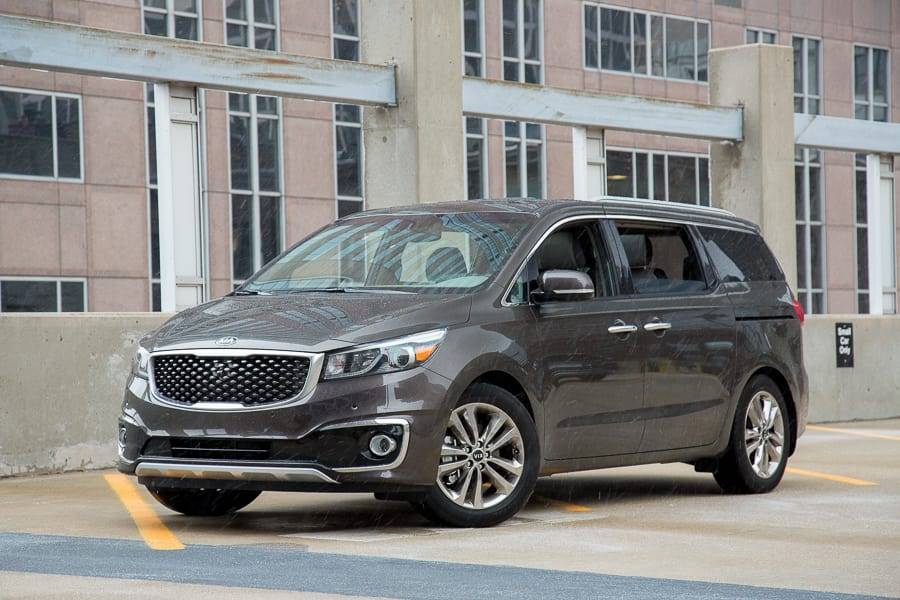 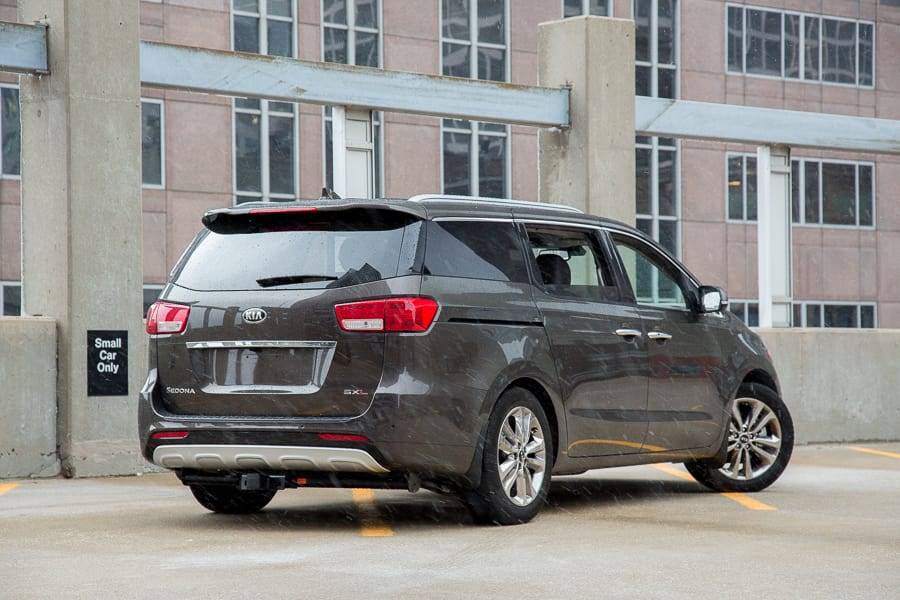 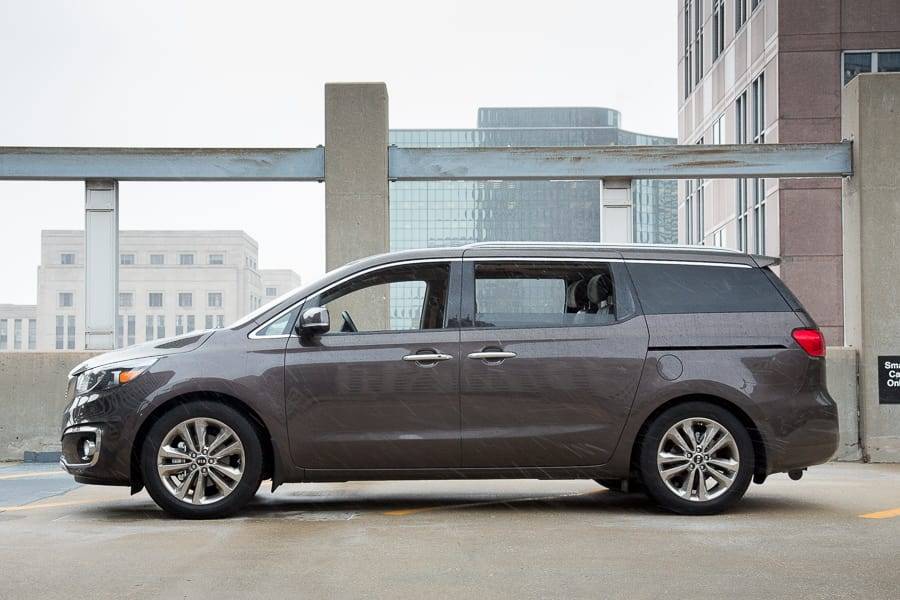 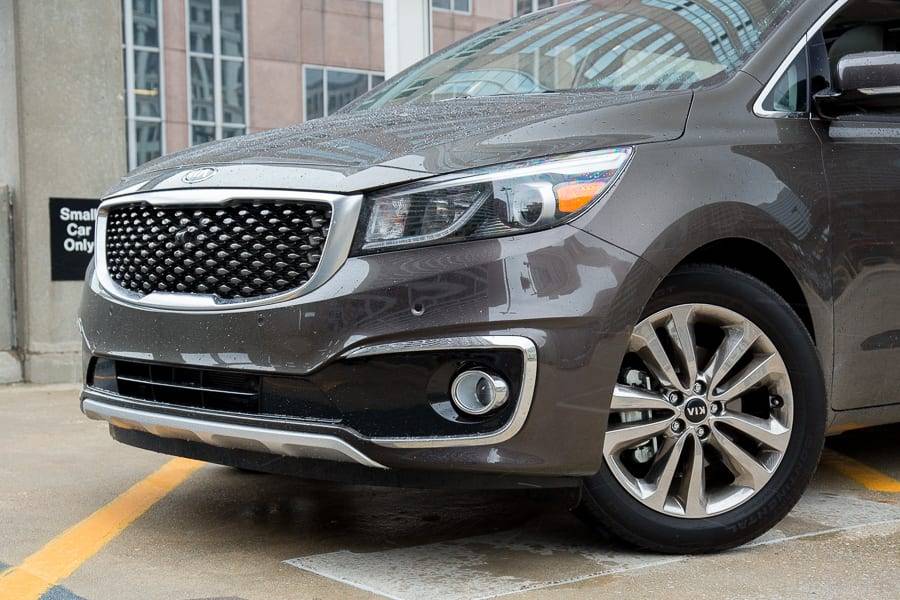 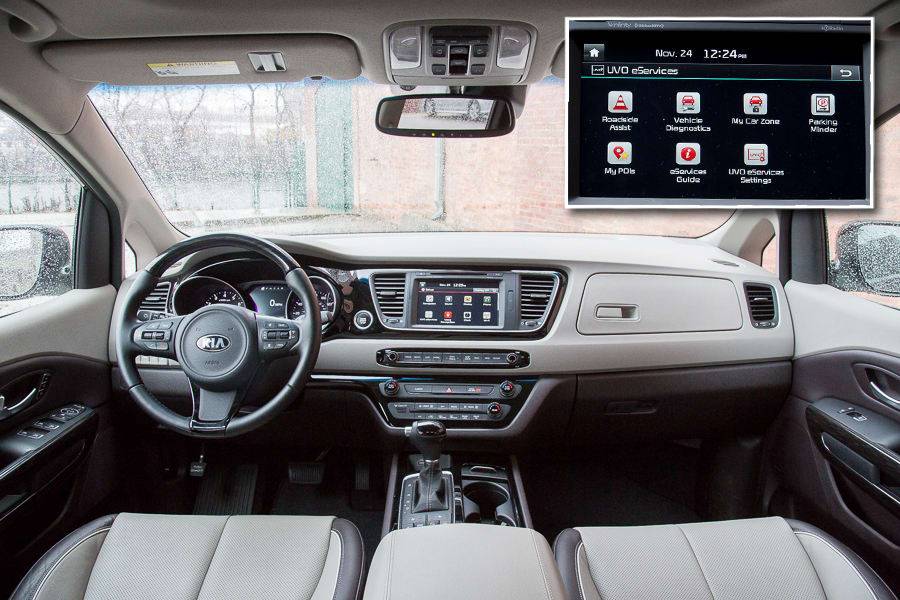 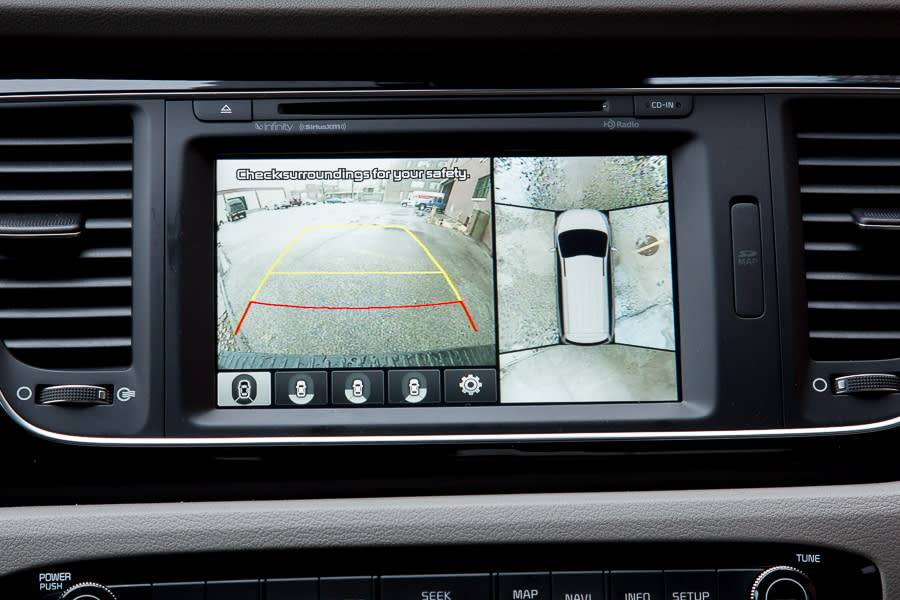 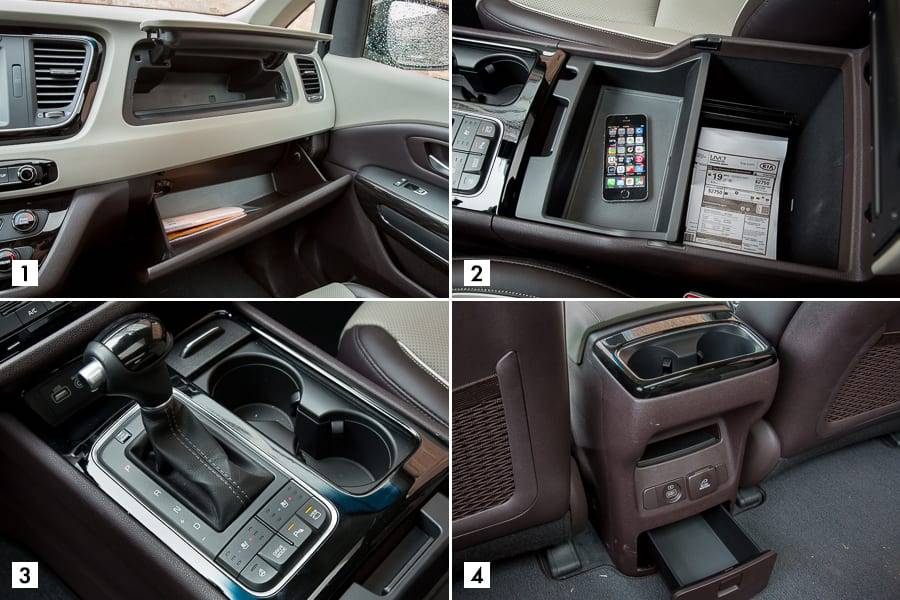 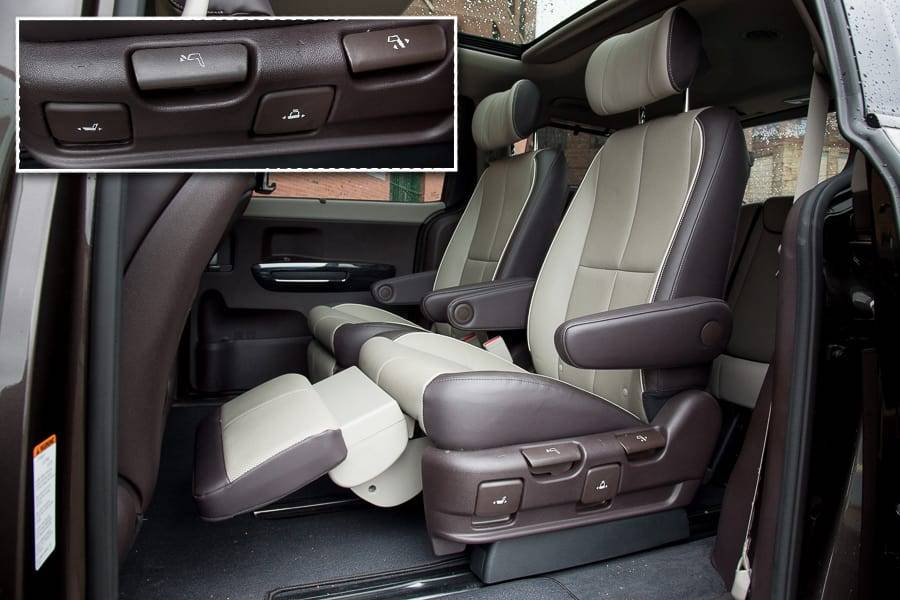 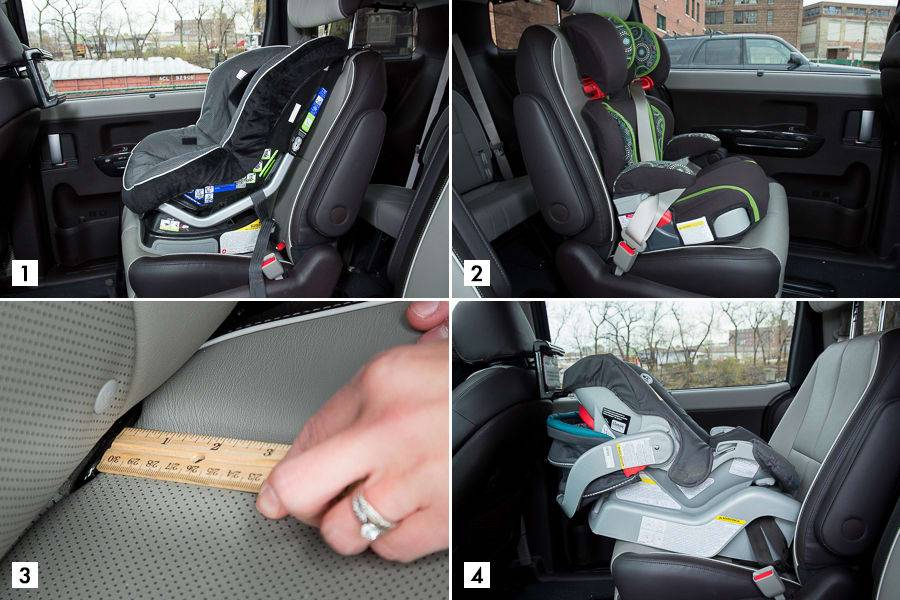 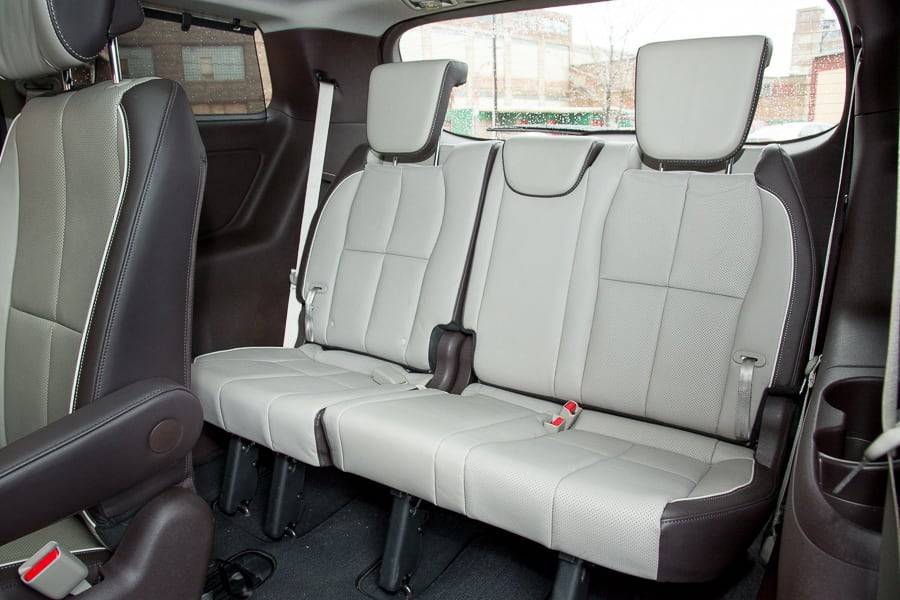 Editor’s note: This review was written in February 2015 about the 2015 Kia Sedona. Little of substance has changed with this year’s model. To see what’s new for 2016, click here, or check out a side-by-side comparison of the two model years.

As the mom of a preschooler and infant twins, I seldom get excited about anything other than sleep these days. Kia’s redesigned minivan, however, perked me up quicker than an extra-large, double-shot vanilla latte.

The redesigned 2015 Kia Sedona is a well-executed family-hauler that will keep Mom, Dad and the rug rats comfortable and entertained; while it’s leaps and bounds ahead of its predecessor, though, it doesn’t quite leapfrog its competitors.

The Sedona was redesigned this year with bolder styling, a new engine and more convenience features; compare the 2014 and 2015 models here. Major players in the class include the Toyota Sienna, Honda Odyssey and a pair of twins: the Chrysler Town & Country and Dodge Grand Caravan. Compare them all here.

Exterior & Styling
Apparently, Kia doesn’t know that “minivan” is no longer a dirty word. The automaker says the Sedona wears crossover-like styling and calls it a “midsize multi-purpose vehicle.” Whatever Kia says, there’s no mistaking the Sedona’s identity as a minivan — but it is the best-looking minivan in the segment. The Sedona can’t escape the body style’s chunky, Dustbuster-wedge profile and telltale sliding-door tracks, but up front it’s all style. Its giant, multifaceted grille is studded with plenty of chrome and flanked by sleek LED-accented headlights; the back finishes strongly with a liftgate spoiler. The overall look is smart, aggressive and even — dare I say it? — sporty.

How It Drives
Loaded with kids and gear, the Sedona is a confident highway cruiser whose direct-injected, 3.3-liter V-6 engine never felt strained. The 276-horsepower unit performed adequately from a stop, and the six-speed automatic transmission easily delivered more gusto for passing and merging.

A button near the steering wheel engages a fuel-saving Eco mode that dulls accelerator response, but not annoyingly so. In terms of fuel economy, the Sedona is midpack, with an EPA rating of 18/24/20 mpg city/highway/combined, a notch above the Chrysler vans (17/25/20) but trailing the Honda Odyssey (19/28/22).

On the road, the ride is on the firm side. It took small pavement imperfections in stride but was outmatched by Chicago’s never-ending construction season; larger potholes unleashed a ripple of bumps throughout the cabin. The Sedona handles like the long, hulking van it is, with a lack of agility that’s shared across the class. It leans around corners and floats over bumps, but is easier to park than other vans because it has one of the smallest turning circles in the segment. The optional Around View Monitor camera system also made short work of parking maneuvers with its large screen, multiple-angle views and parking guidelines.

Interior
The Sedona can make an impression before you even open the door with its optional and neat Smart Welcome system: It illuminates the door handles and unfolds the side mirrors when the key fob is nearby. Inside, families will find comfortable, nice materials in all three rows — but $43,000 should net you more than “nice”; I expected more wow factor from the top-of-the-line SX Limited model I drove. The front row’s leather seats with contrast stitching look and feel high-quality, but the rest of this trim’s materials fall flat. The multicolored plastic-on-plastic theme is fine, as is the shiny black plastic on the instrument panel, but Kia’s efforts to class things up with a tiny swatch of wood-like trim on the door panels strikes me as cheap. It doesn’t match the rest of the cabin, and if you blink, you’ll miss it.

It’s easy to find a comfortable driving position in the Sedona thanks to a tall ride height, plenty of head- and legroom, and generous seat travel. Second-row passengers will also enjoy adult-friendly amounts of head- and legroom on plush, comfortable seats. My test model was equipped with lounge-seating captain’s chairs in the second row with pop-out leg rests. This is not a new feature; Toyota offers them in the Sienna, and both there and in the Sedona they feel gimmicky to me. Then again, I’m not a 10-year-old.

Getting back to the Sedona’s third row should be easy thanks to the available Slide-N-Stow second-row seats that fold, slide forward and lock against the front seats, but I found them difficult to move. There are several confusing levers, and all the maneuvers require a lot of muscle. If you don’t want to slide the seats up for third-row access, both also slide side-to-side, opening a larger path between the captain’s chairs. The seats can’t be removed for more storage, however, and nor do they fold into the floor like Chrysler’s magical Stow ‘n Go setup.

The third row is also roomy; I had more than enough legroom back there, but if you need more the second-row seats can be slid pretty far forward to make room for those in the wayback. By the numbers, the Sedona’s third row is midpack, with 34.8 inches of legroom and 38.9 inches of headroom. The Sienna offers a touch more legroom (36.3) but a bit less headroom (38.3), and the Odyssey’s third row has less headroom (38.0) but a lot more legroom (42.4). The Chrysler twins have the smallest third row in the segment.

Just as important to family happiness as room are features, and here the Sedona doesn’t quite hit the mark. It has a conversation mirror, but it’s uselessly small. The sliding center console in the first row doesn’t slide far enough back to benefit the second row; my 4-year-old’s cupholder stayed irritatingly out of reach. Instead of an entertainment system, my pricey Sedona model had a tablet holder. My Kindle Fire easily slid into the head-restraint-mounted device, but one tablet for three children is not good math. I appreciate the innovation, but a tablet holder is a lot less expensive than an entertainment system and the bottom line should reflect this.

Ergonomics & Electronics
Kia’s UVO touch-screen system is wonderfully simple, and many operations can be done with only a step or two. It reminds me a lot of Chrysler’s Uconnect — another great interface. The UVO screen is large and clear, the touch inputs register quickly, and the swipe functionality has a natural, smartphone-like feel. UVO also includes some interesting services, like a parking-minder: When you turn the ignition off, the vehicle’s location is sent to your smartphone. I was able to pair my phone quickly and easily launch apps like Pandora. The cabin is also optimally set up for device-charging: There are two USB ports in the front row and another in the second row, along with a 115-volt outlet. Behind the third row is another 115-volt outlet as well as a 12-volt one.

The climate controls are clearly marked and logically laid out below the display screen. Controls for the heated steering wheel and heated seats are within easy reach. Users can also access climate settings via the touch-screen, but that requires drilling down through several menus. The buttons make more sense.

Behind the third row is a deep, uncovered storage well. At 33.9 cubic feet, it’s fairly spacious but falls behind the Sienna (39.1) and Odyssey (38.4). The third-row bench drops into the storage well to create a flat cargo floor, but like the second row, the seat is heavy, and folding it is a clumsy, difficult process.

Kia takes the struggle out of loading packages, however, with its optional Smart Tailgate feature. When the van senses the key fob behind the rear bumper for 3 seconds, the liftgate opens automatically — especially useful when your arms are full of stuff.

Safety
The Insurance Institute for Highway Safety named the 2015 Sedona a Top Safety Pick, along with the Odyssey; the Toyota Sienna earned the agency’s highest designation, Top Safety Pick Plus. The National Highway Traffic Safety Administration has not yet tested the Sedona.

Installing infant and convertible child-safety seats in the Sedona’s second row was easy thanks to plenty of room and exposed Latch anchors; the third row’s recessed buckles, though, made it difficult to install a booster. Click here for the Sedona’s Car Seat Check.

A backup camera is standard on all models except the base L; the Around View Monitor camera system is optional on the top SX Limited trim. Forward collision warning and lane departure warning systems are also optional on SX Limiteds but unavailable on other trims. You can see all the Sedona’s safety features here.

Value in Its Class
The 2015 Kia Sedona starts at $26,795, which is several thousand less than any other minivan except the Dodge Grand Caravan ($22,390). The Sedona, however, is better equipped than the Grand Caravan, with standard features like rear parking sensors, keyless entry and Bluetooth. (All prices include destination charges.)

The Sedona offers affordable pricing and standout styling and should be attractive to families shopping in the class — but so, too, will be a lot of other vans that have popularity on their side. The Sedona has always been a sales dog; Kia sold just 11,570 of them through November 2014. It’s up against several six-figure sales stars: Chrysler sold a combined 250,230 of the Town & Country and Grand Caravan during that same time period, and Honda (112,370 Odysseys sold through November) and Toyota (112,814 Siennas) are a similar story. The 2015 Sedona is good, but it’s going to take more than good to win over families with a lot of great minivans from which to choose.