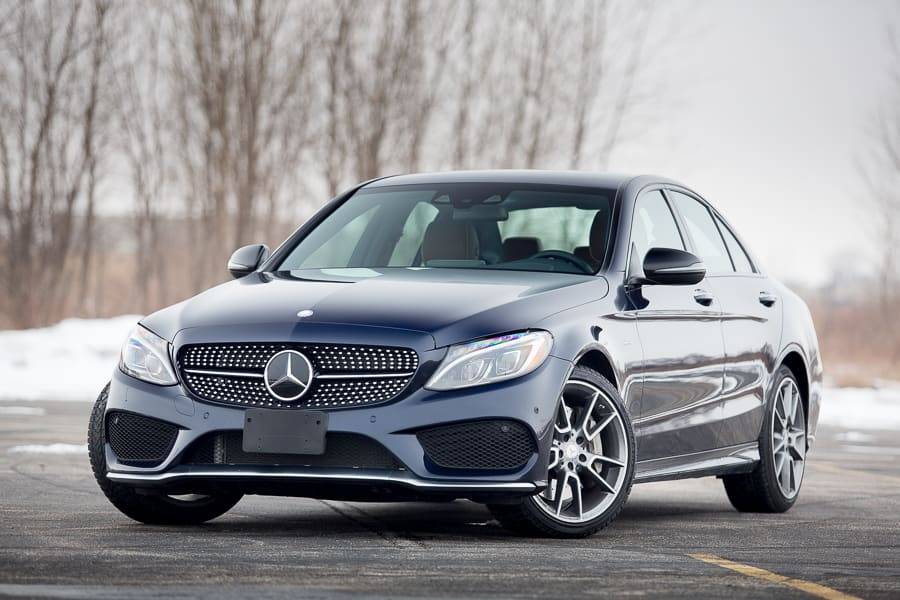 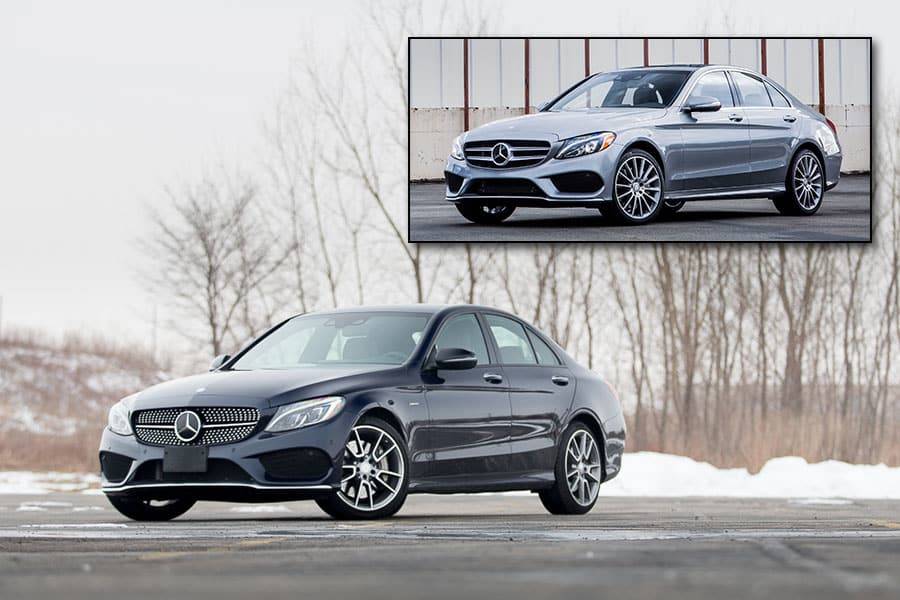 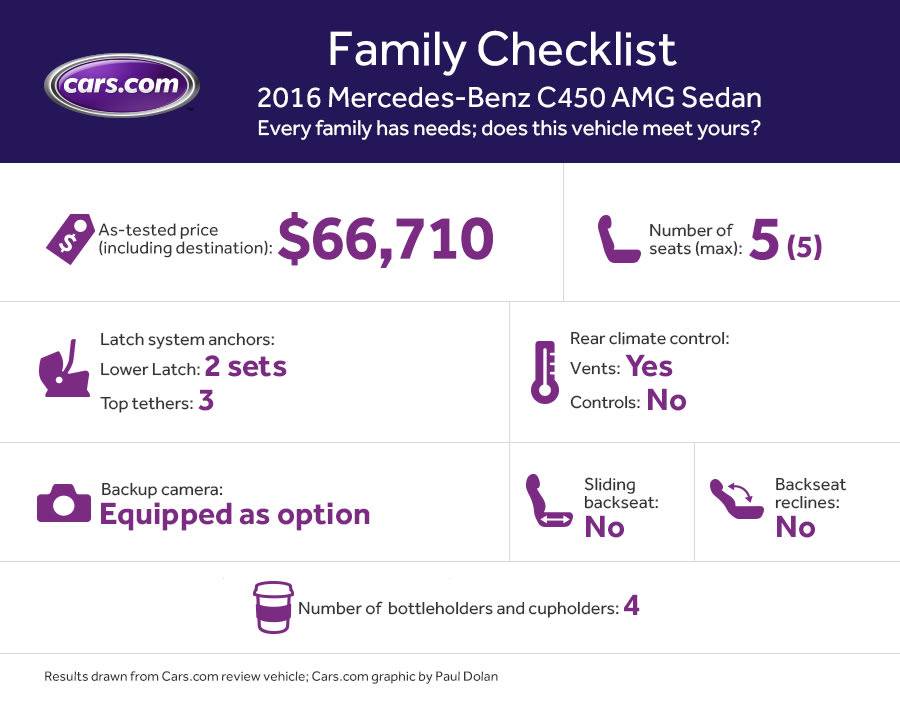 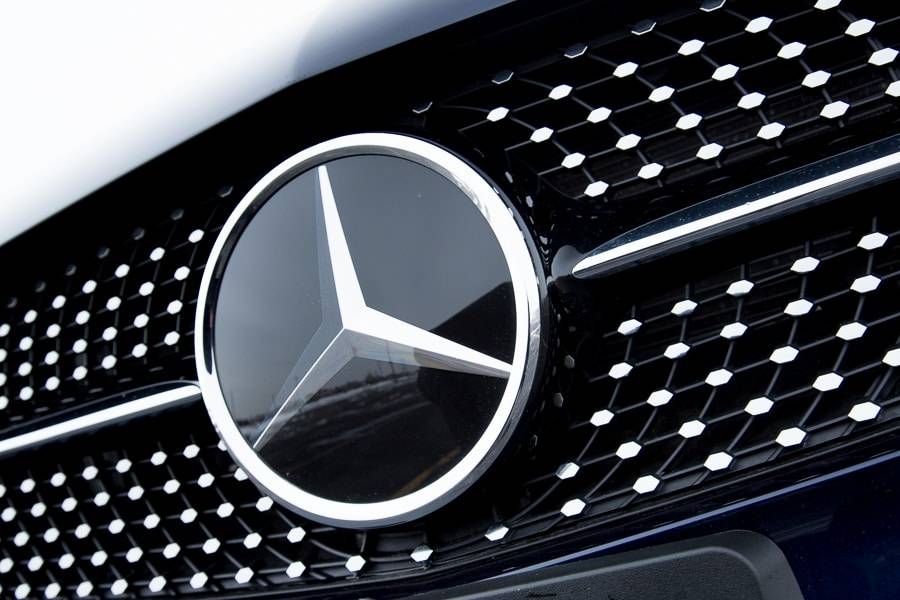 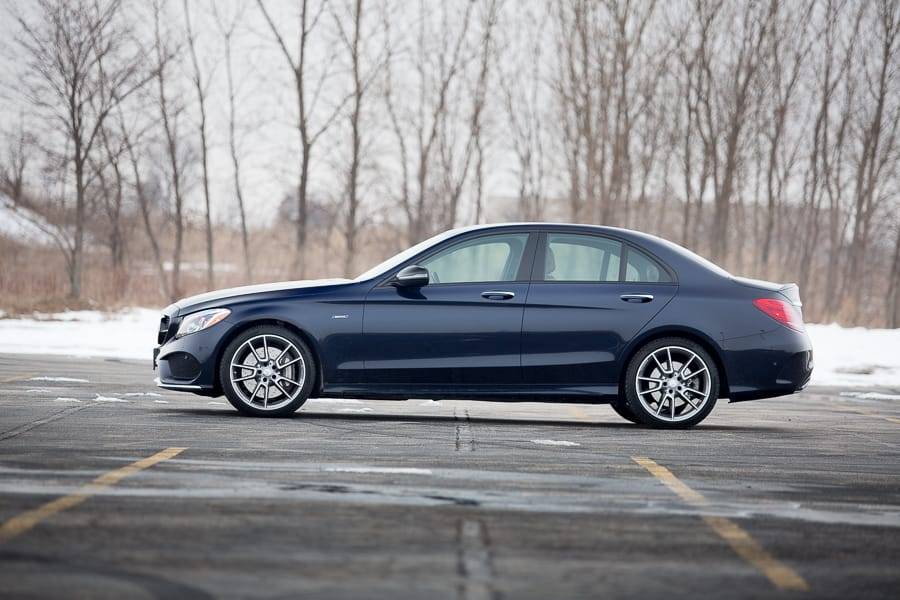 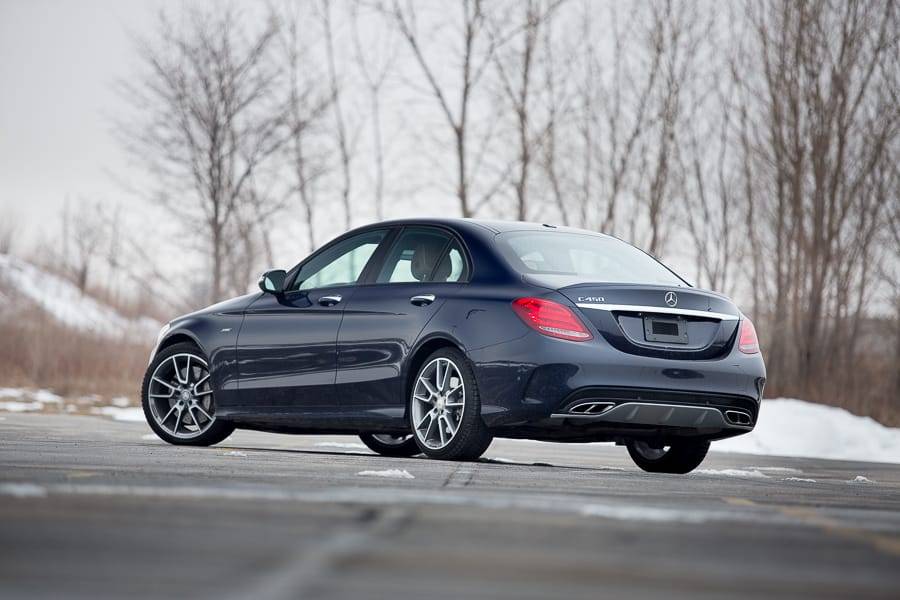 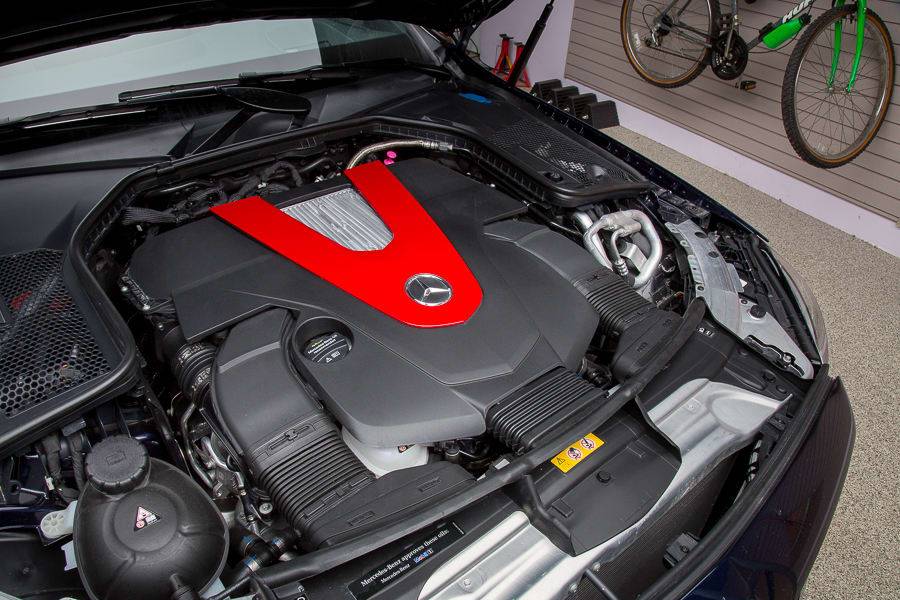 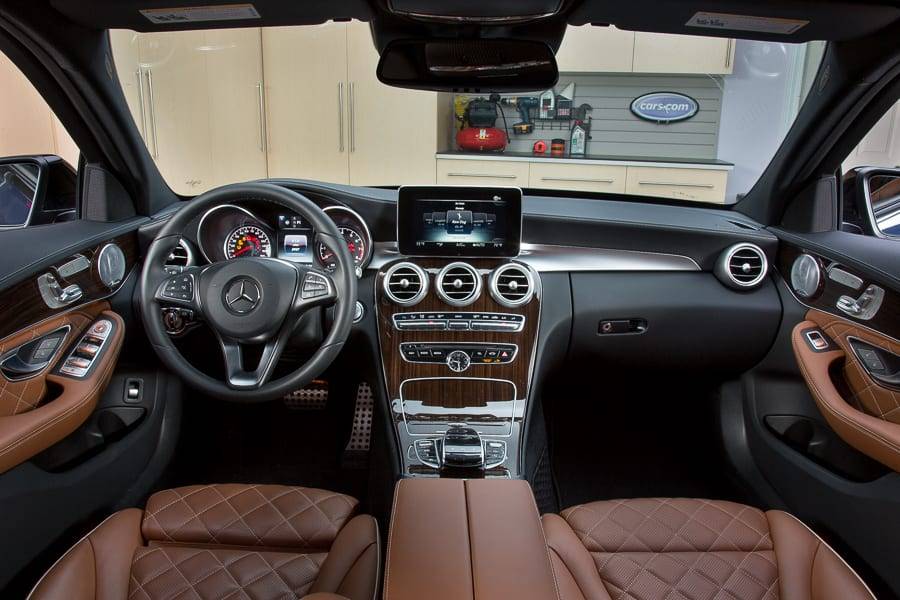 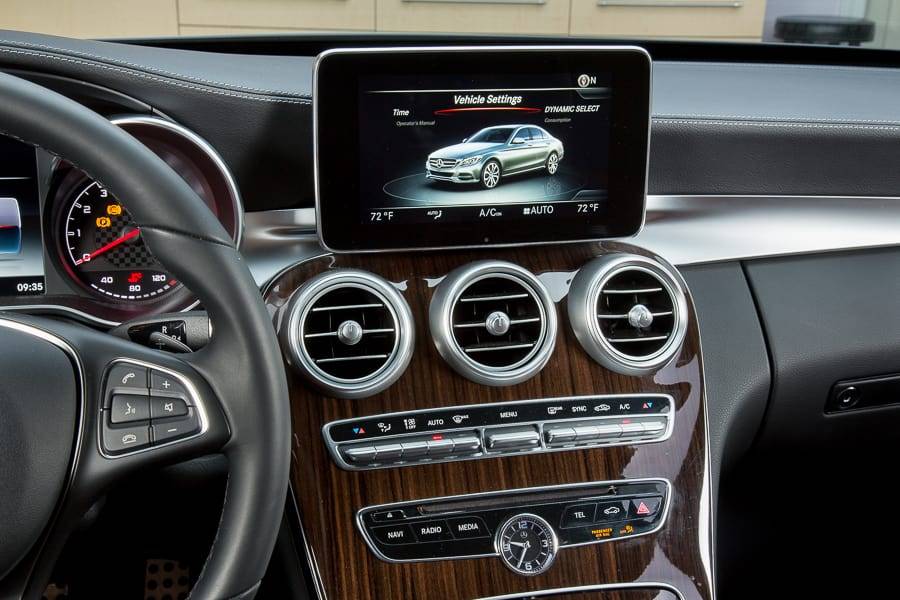 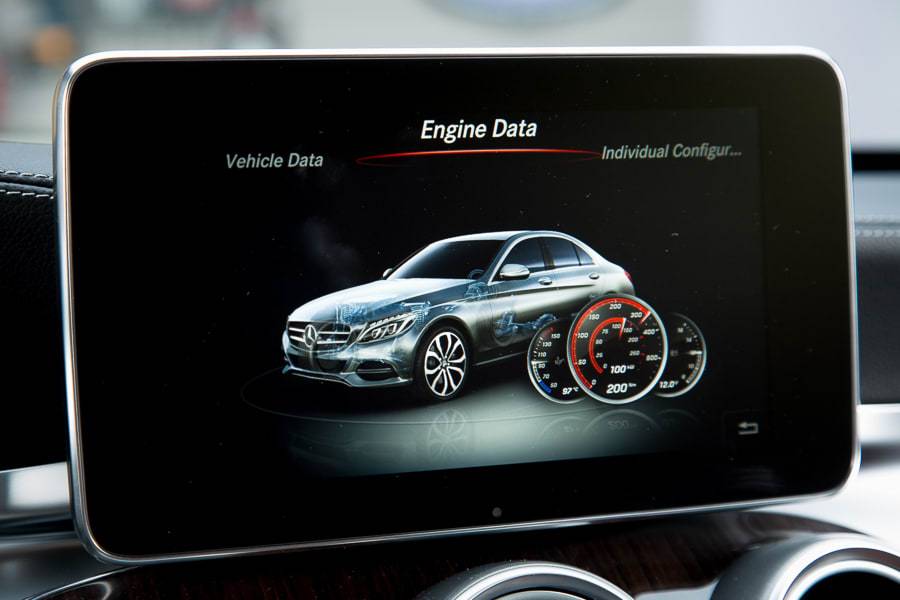 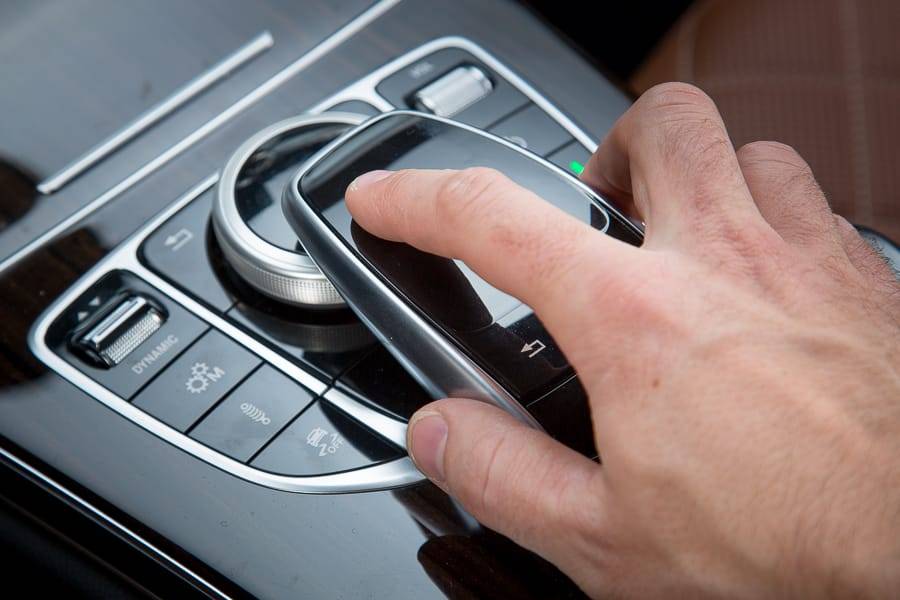 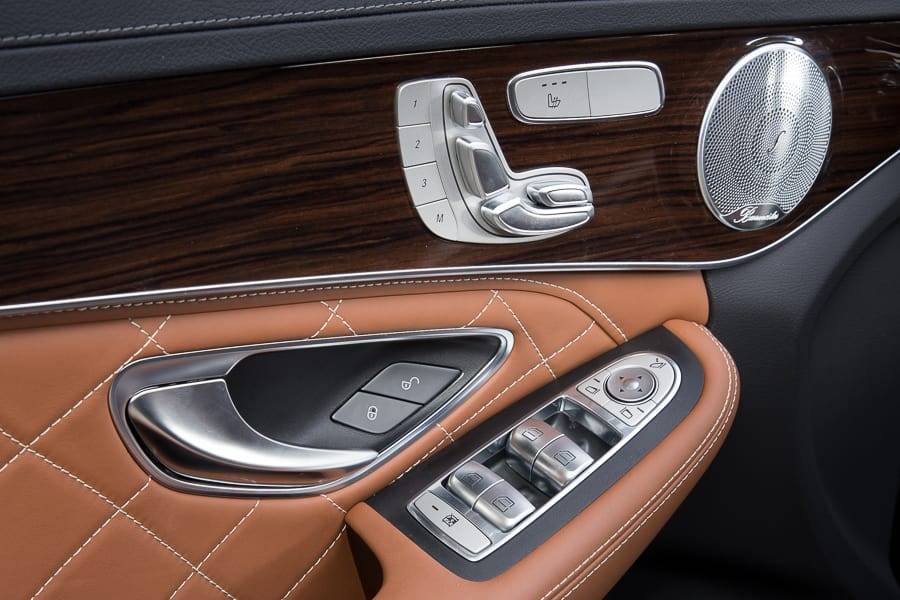 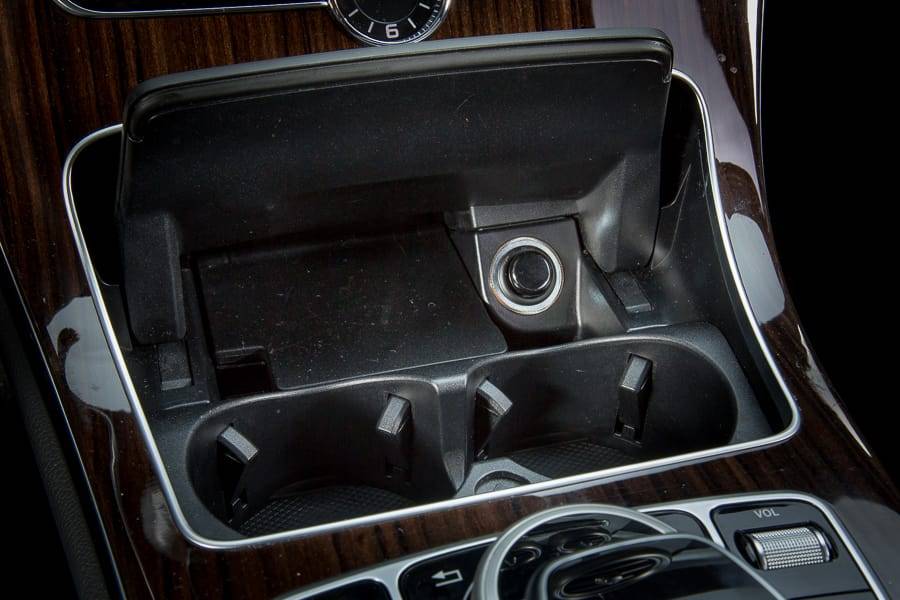 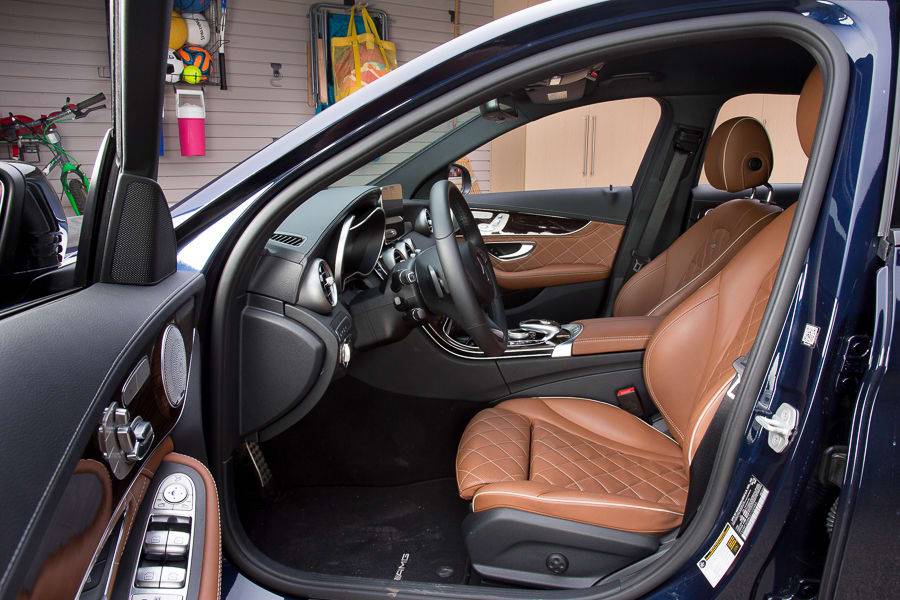 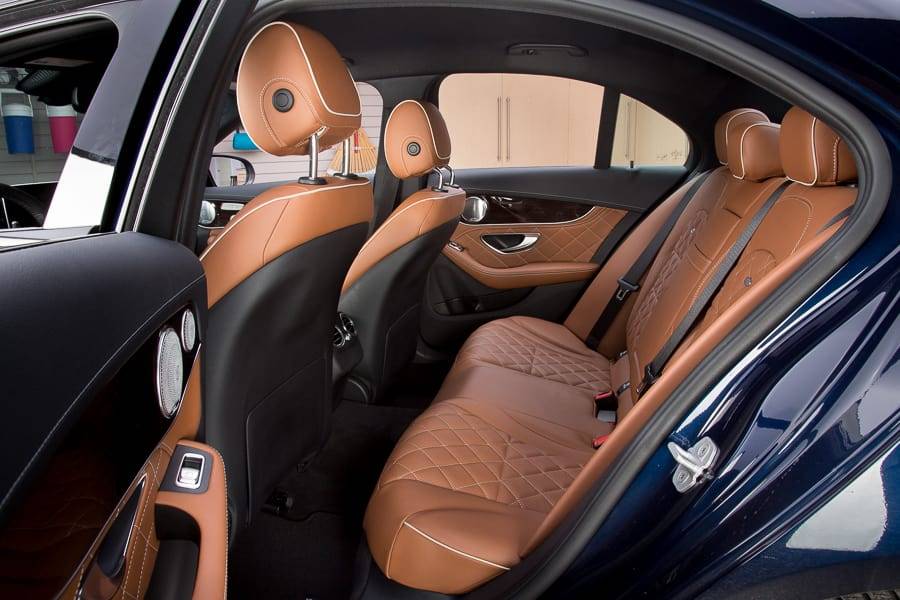 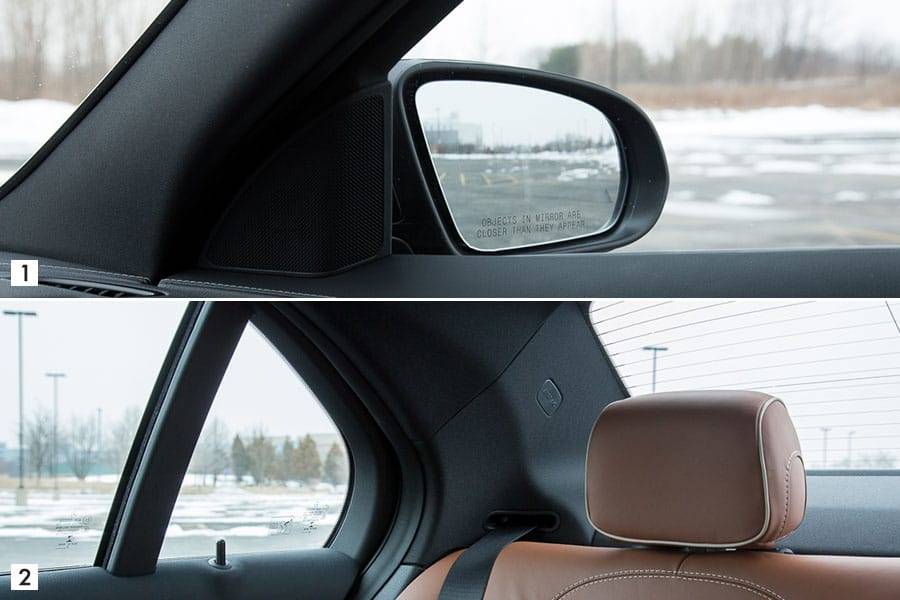 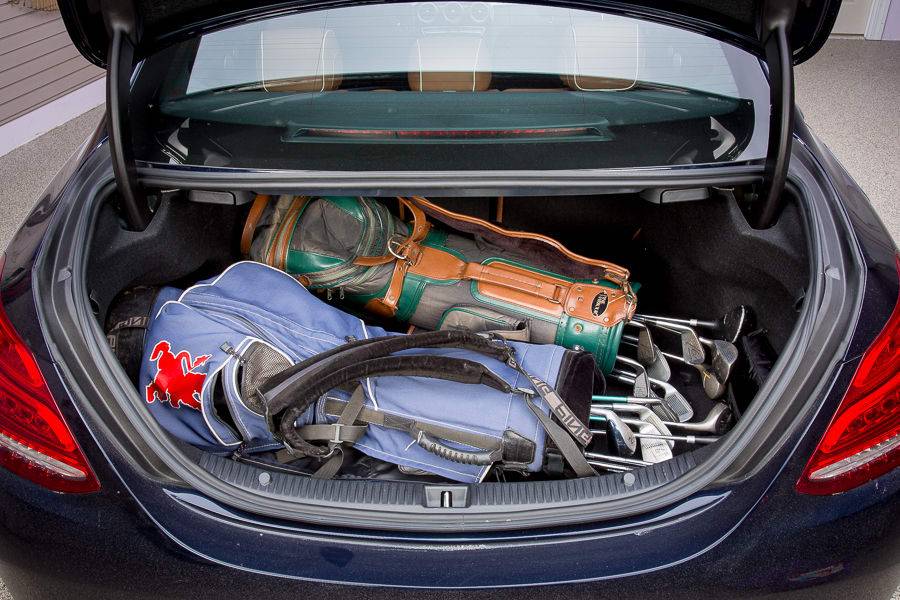 The verdict: Stung by poor reliability in the first year since its redesign, the Mercedes-Benz C-Class sedan is nonetheless an appealing option for sport-sedan shoppers.

Versus the competition: Stunning cabin quality, good performance and elegant styling make the C-Class a solid choice among its rivals. It’s more Mercedes-Benz luxury than sport, but it continues to justify having earned Cars.com’s Best of 2015 award.

The C-Class comes in myriad variants with all sorts of drivetrains. The C-Class coupe, which skipped 2016, will arrive at dealerships soon as a 2017 model with a redesign along the lines of the sedan. A C-Class convertible also will join the fray. This review covers the sedan.

4-Matic, which is what Mercedes-Benz calls their all-wheel system, is optional on the C300 and standard on the C450 AMG. It’s unavailable on the C63 and plug-in hybrid models. We evaluated the C450 AMG, to which I’ll devote most of this review, but our review of the 2015 C300 gives a broader overview of the current-generation C-Class.
Exterior & Styling
The C450 AMG Sport’s bodywork looks similar to the C300’s Sport Package, save a unique lower bumper finish, split dual tailpipe frames (though there’s still a single pipe behind each) and a single-blade grille that recalls the C63’s single-split-blade design. The C450 also gets black trim around the windows and side mirrors – cosmetic touches you also can get on the C300 as options.

It’s a good look overall, but then again, so is any C-Class, which Mercedes-Benz redesigned to tasteful, mini-S-Class effect.
How It Drives
The C300 is surprisingly capable, with a quick-shifting seven-speed automatic and potent torque from its turbocharged four-cylinder engine. We clocked our long-term, all-wheel-drive C300 hitting 60 mph in just 5.95 seconds.

The C450 AMG, by contrast, is not some tarted-up C400. Its twin-turbo V-6 is an adaptation of last year’s C400, and the output — 362 horsepower and 384 pounds-feet of torque — is up a modest 33 hp and 30 pounds-feet. But the numbers are misleading. I’ve driven the C300 and C400 back-to-back, and I never found a strong case in terms of raw performance to recommend the latter. The C450 changes that. Takeoffs are quick, with a surge around 2,500 rpm, where the C450 enters a smooth, flat torque plateau that heaves you to higher speeds with seamless vigor. Switch its driving modes to their sportiest settings, and the exhaust pops and hisses when you lift off the accelerator. Keeping with Mercedes’ tradition of quietness, the exhaust never gets noisy. But it adds a degree of visceral excitement that the C400 lacked.

The C450 AMG’s seven-speed automatic transmission can kick down multiple gears at once even in its least-responsive mode, Comfort. In sportier settings, it blips the gas on downshifts for a smoother, sportier transition – as a good stick-shift driver might do.

The Mercedes-Benz C-Class C300 has modest handling, but the C450 AMG version elevates the car to legitimate sport-tuned sedan. The steering delivers good feedback, and, if you dial the adaptive suspension into its sportiest modes, the C450 exhibits minimal body roll.

One editor noticed some squirminess from our test car’s oddly sized Pirelli winter tires – P225/40R19s all around, rather than the wider P235/40R19 front and P255/35R19 rear tires that Mercedes normally pairs with the C450’s 19-inch wheels. Properly sized all-seasons or high-performance summer rubber likely would fix that, but even these winter tires had good dry-weather grip. On switchbacks, sudden steering inputs can bring some initial push, but the nose stays put otherwise. The tail refuses to play around much, despite Mercedes’ claim that the C450’s all-wheel drive defaults two-thirds of its power to the rear. The car just never wants to slide around, even as you feed more gas through a corner. I was able to coax the tail into tentative drifts by lifting off the gas here and there through long sweepers, but the C450 never seems like a natural drifter – especially compared with rivals such as the BMW 3 Series and Cadillac ATS.

Other hardware impresses: The C450’s brakes are good for strong, linear stopping power and confident pedal feel. The adaptive sport suspension, borrowed from the C63, exhibits firmer ride quality than the C300 but maintains good cabin isolation over minor bumps. It’s noticeably firmer in the suspension’s sportier modes, but the comfort-oriented settings give the C450 acceptable road-trip comfort. The car’s optional semi-autonomous driving aids, which amount to full-speed adaptive cruise control with steering assist, keep you centered and spaced properly on the highway. (Even in these situations, you should pay attention to the road. Cars like this aren’t fully autonomous, as the car will remind you if you leave your hands off the steering wheel for too long.)

Interior
Aside from some unique gauges, the C450’s cabin is similar to a C300 Sport. Materials quality is outstanding for the entry-luxury class, with no cheapened-out plastics below eye level as some competitors employ. Still, some larger drivers may find the center console inhibits thigh room and legroom – areas where certain competitors, such as Audi’s redesigned A4, are roomier.

Sport seats are standard in the C450, but one editor found them too confining. Power adjustments and vinyl upholstery also are standard; like on the C300, real leather, heated and ventilated seats, and a panoramic moonroof are optional. Options unique to the C450 include an AMG steering wheel and performance seats with even more bolstering.

The backseat is a little tight, with good headroom but a low seating position, short bottom cushions and a large center hump in the floor. That’s par for the course in this class, but competitors such as the redesigned 2017 Audi A4 buck the trend, as do certain midsize sedans that run in this price range, such as the Lexus ES.

Optional multimedia features include a navigation system that swaps the 7-inch screen for an 8.4-inch display, as well as a head-up display and in-car Wi-Fi (subscription required after the trial period) that enables TuneIn internet radio. Burmester premium audio also is optional, but it’s unexceptional, with muddy bass and little clarity throughout its range. It also has to fight considerable wind noise at highway speeds; as luxury cars go, the C-Class is not particularly quiet.

Apple CarPlay and Android Auto are not offered.
Cargo & Storage
Trunk volume is a modest 12.6 cubic feet in most C-Class sedans, but the rear seats fold in a 40/20/40 split to open up a large pass-through with no ledges or trailing seat belts in the way. The C350e has a slightly smaller trunk (11.8 cubic feet), and the C63 loses the backseat’s middle pass-through for a simpler 60/40-split folding seat.
Safety
The Mercedes-Benz C-Class earned top marks in the Insurance Institute for Highway Safety’s side and moderate-overlap frontal crash tests, but it hasn’t undergone IIHS’ roof-strength, small-overlap frontal, or seating and head restraint tests. It earned five stars overall out of a possible five in National Highway Traffic Safety Administration testing.

Standard safety features for this body type include some nice driver assistance packages, likea forward collision warning system with automatic emergency braking that scored five out of six possible points in IIHS’ auto-braking tests – enough to earn the agency’s top grade (superior) for auto-braking. (An optional auto-braking system called Pre-Safe Brake with Pedestrian Recognition applies even stronger brakes than the standard automatic emergency braking; it earned the full six out of six points in IIHS tests.) Other standard safety features include Mercedes-Benz’s Attention Assist system, which senses driver drowsiness on dozens of parameters and alerts you to pull over.

Of note, a backup camera — widely standard in cheaper cars — is optional, not standard, in the C-Class. Other safety options include side-impact torso airbags for the rear seats (head-protecting curtain airbags are standard), active headlights, blind spot and lan departure warning systems with lane-keeping steering, and warning systems for frontal vehicular or pedestrian cross-traffic.
Value in Its Class
A number of crowd-pleaser luxury features — such as leather, a moonroof and heated seats — are optional rather than standard, and it’s inexcusable that a sedan that starts at almost $40,000 doesn’t have a standard backup camera. So the Mercedes-Benz C-Class isn’t much of a value choice, at least among luxury cars, and the current generation’s poor reliability in its first year on the market doesn’t help the cause. It’s less of a concern if you plan to lease the car, but things that break are inconvenient, even if they’re under warranty.

Still, the Mercedes-Benz C-Class boasts cabin materials that would impress in a $60,000-plus luxury car, and its performance — from capable to fierce, depending on the drivetrain you choose — is impressive. Mercedes-Benz’s 2016 addition, the C450 AMG, adds a credible sport-sedan alternative.

The good news, thanks to a lot of turbocharging, is that the smaller-engine versions of sport sedans — such as the C300 and rival Lexus IS 200t, BMW 328i and the A4 — all are quick in their own right. It’s a good time to be a sport-sedan shopper, and the redesigned Mercedes-Benz C-Class remains a must-test drive.