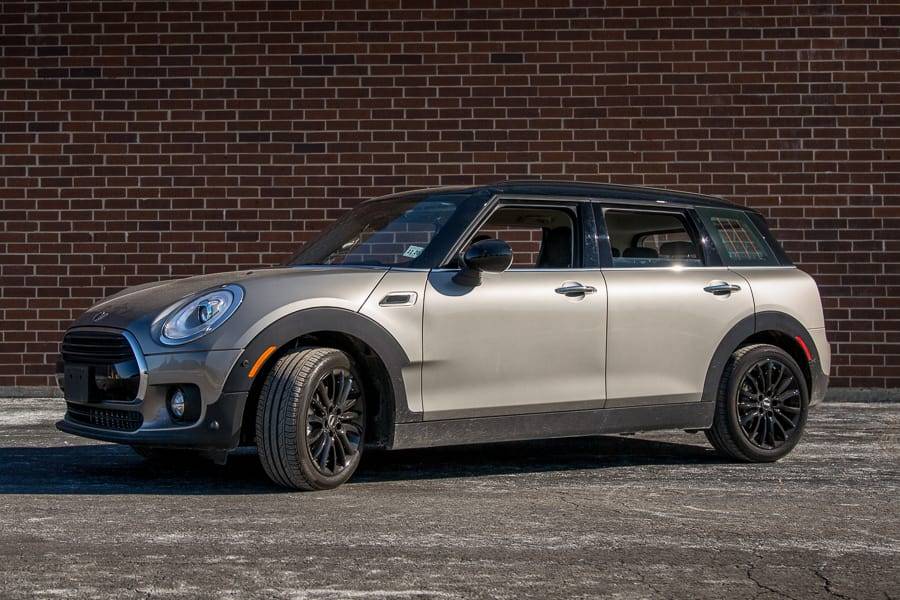 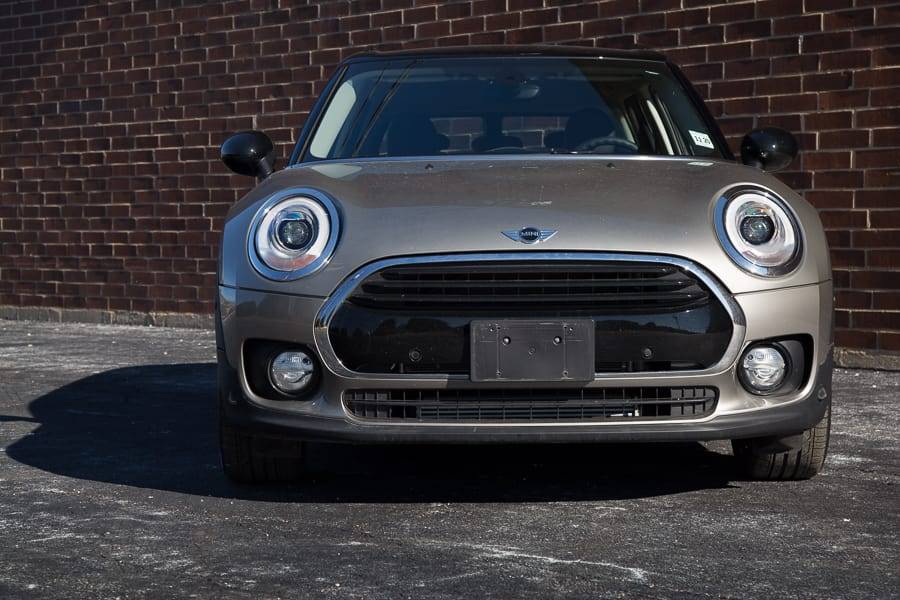 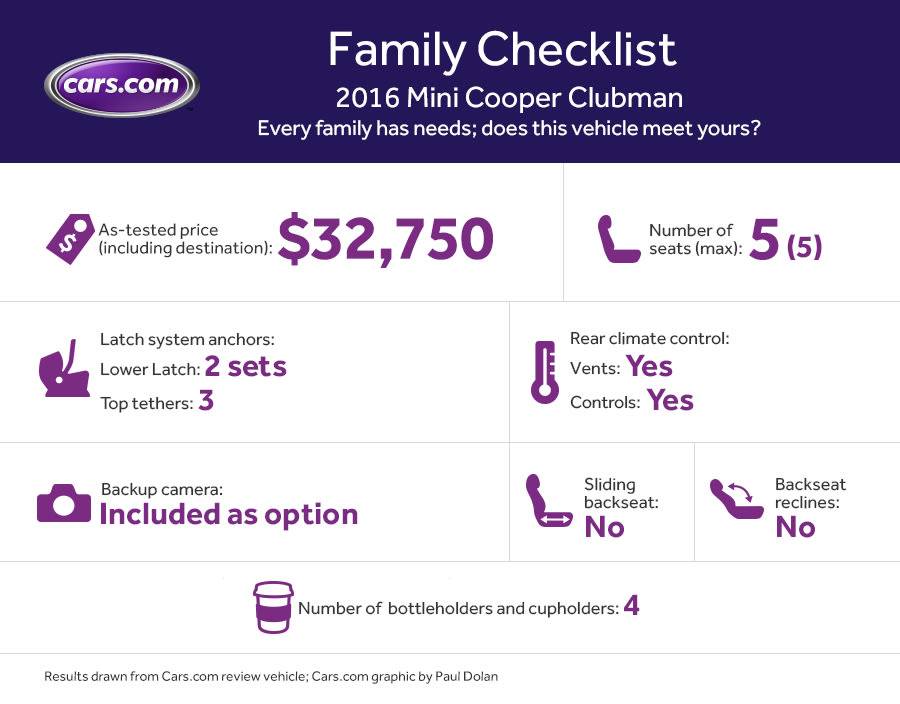 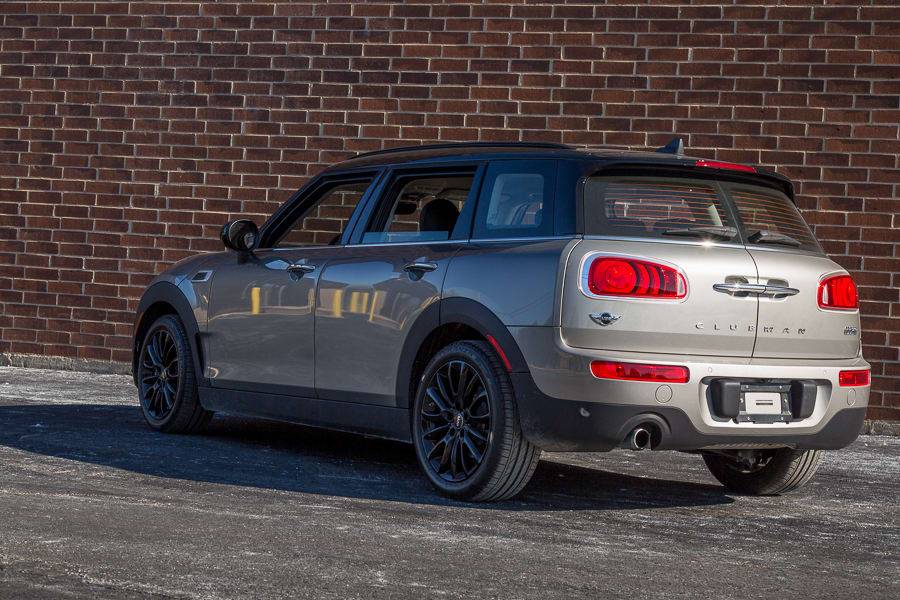 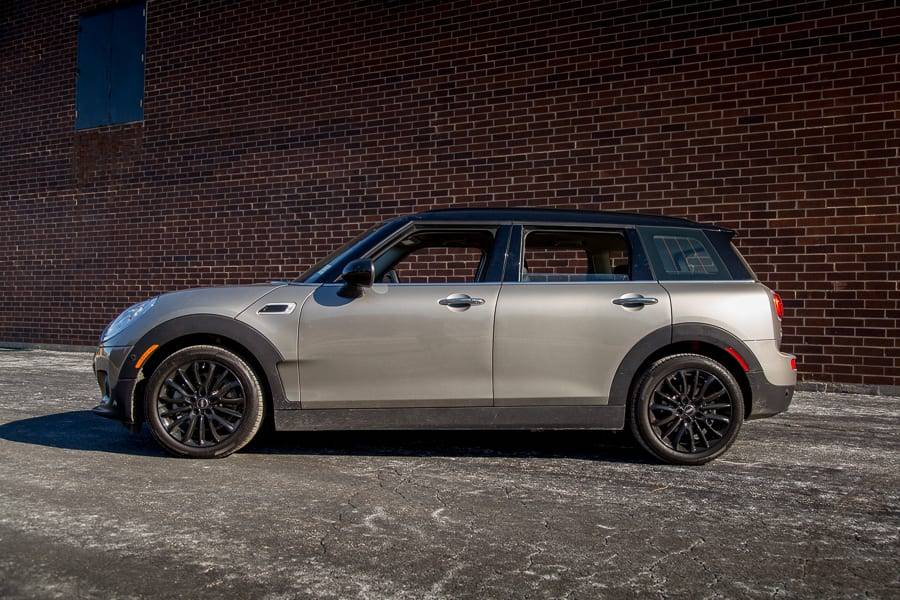 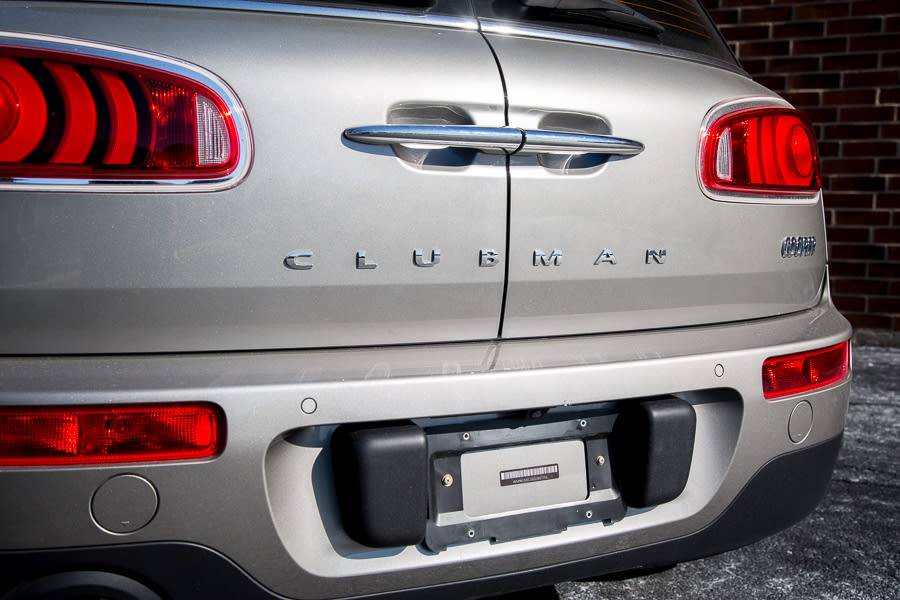 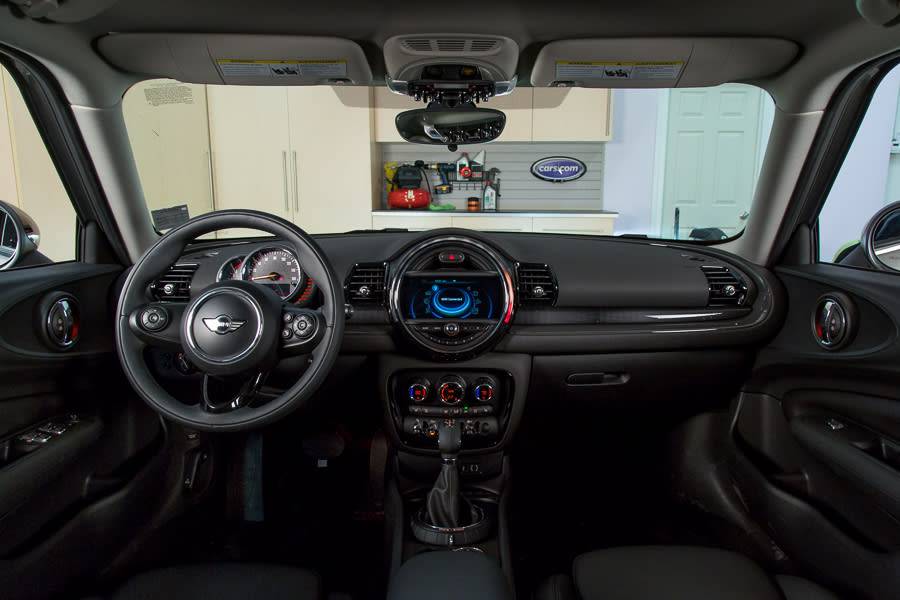 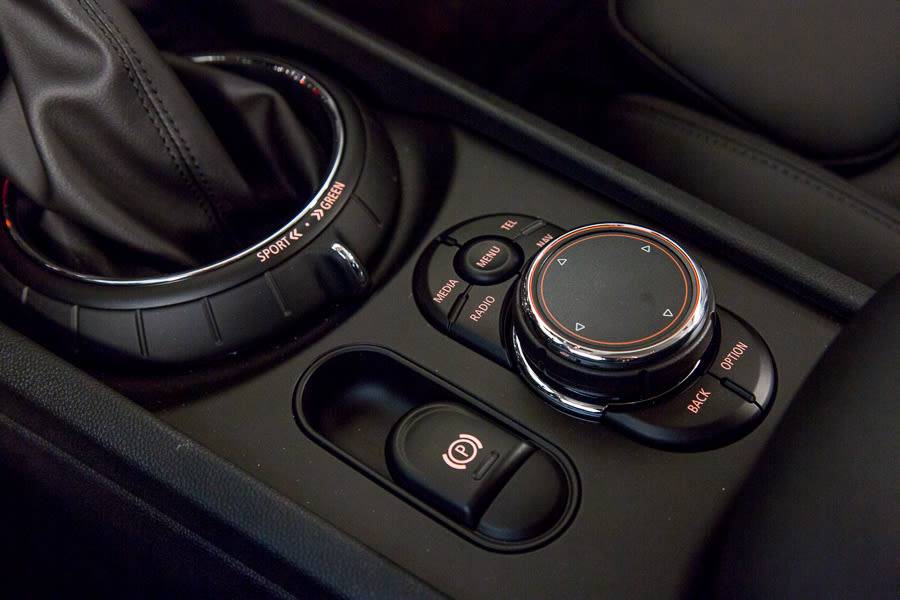 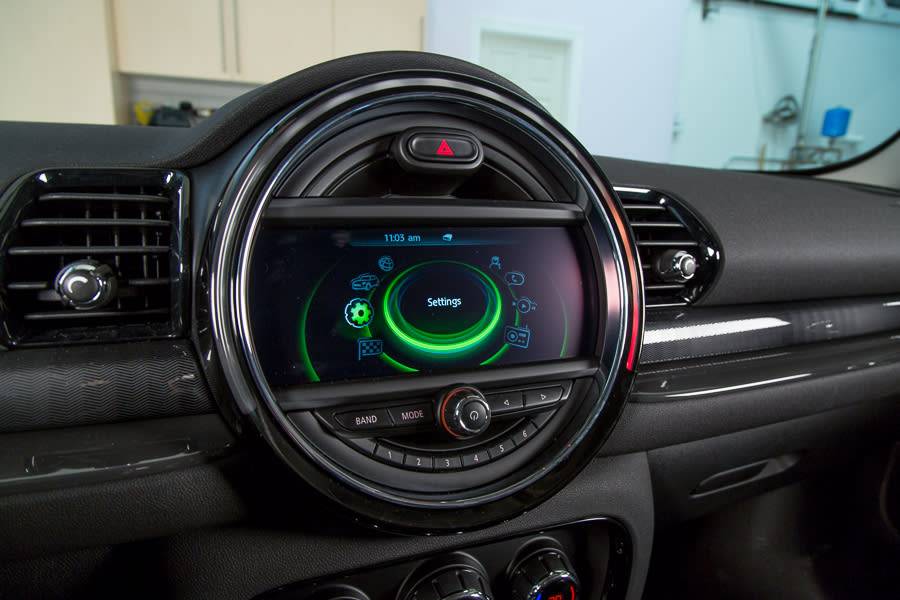 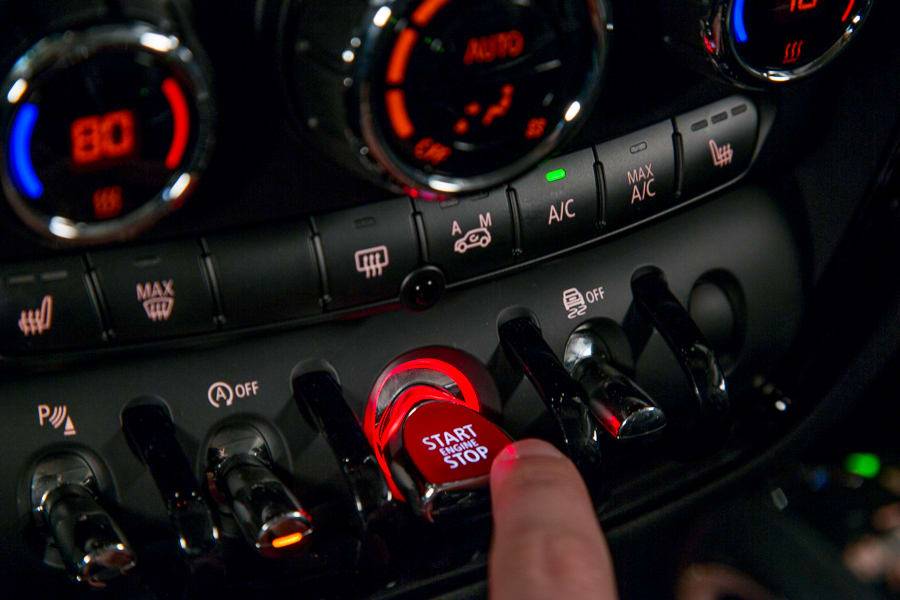 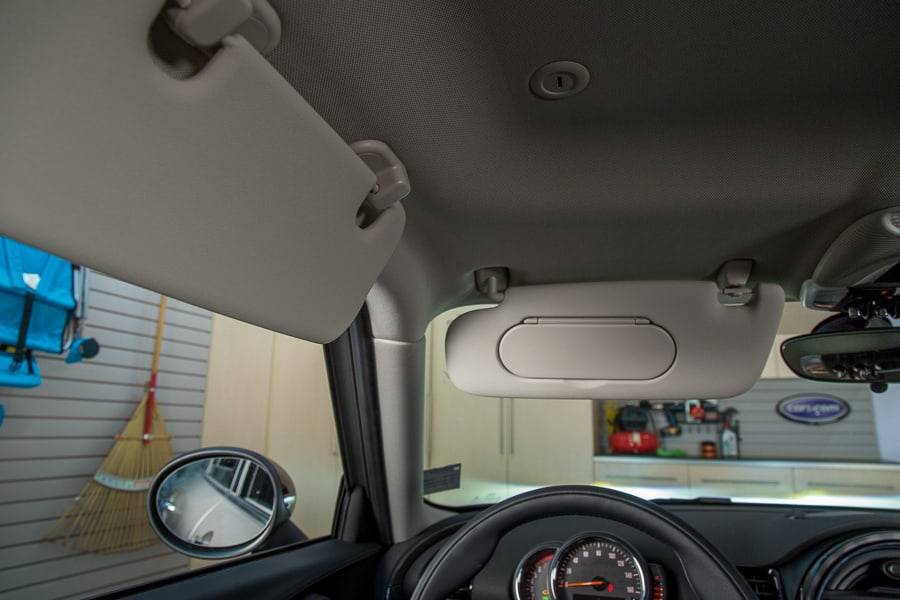 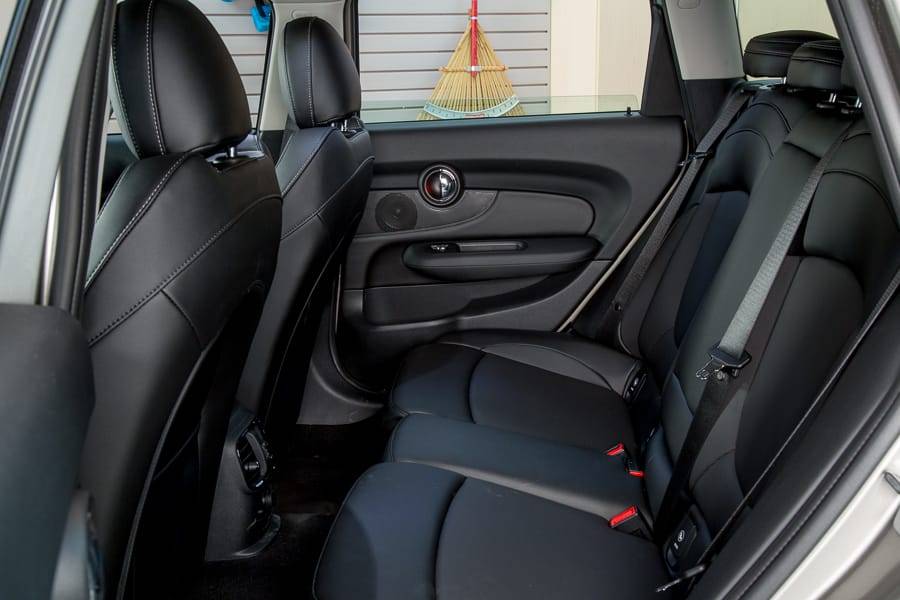 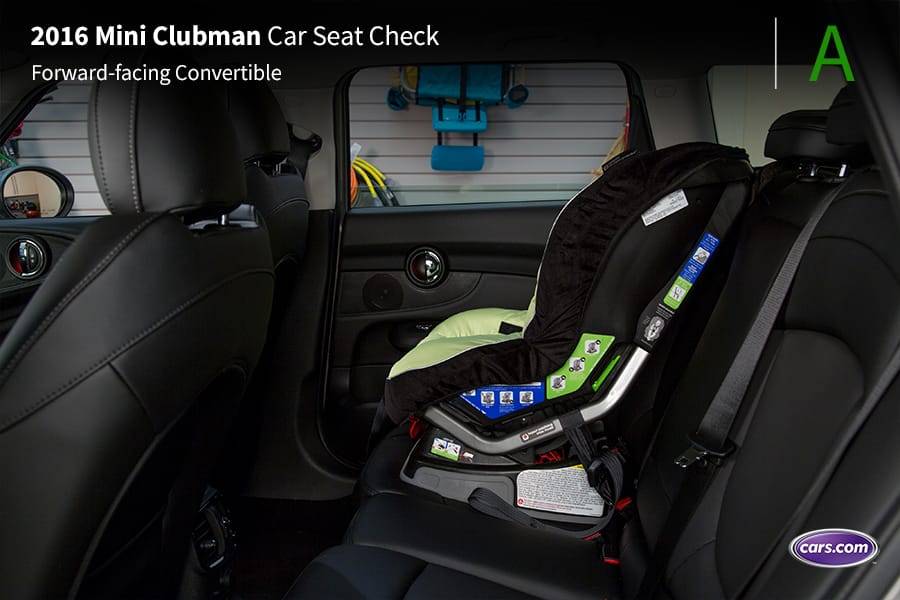 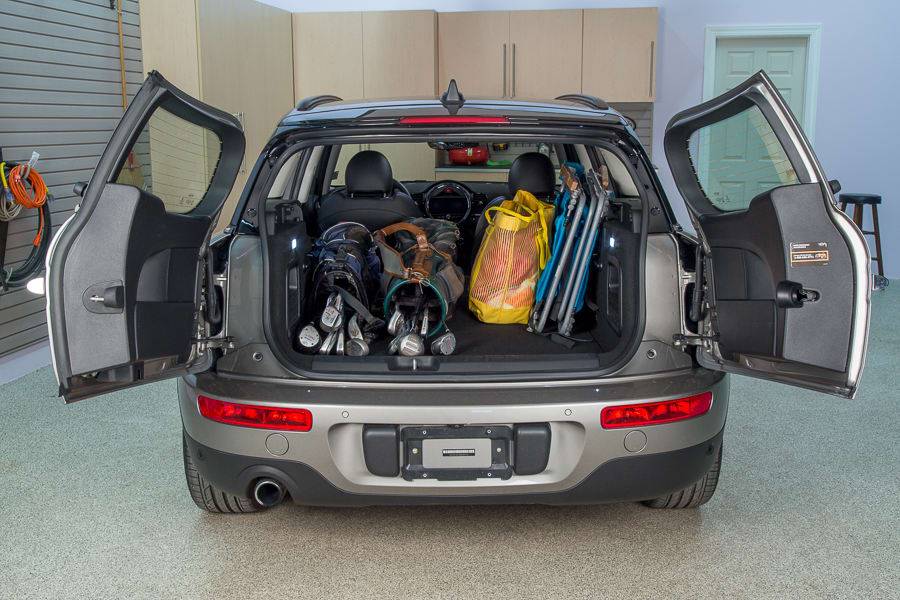 The verdict: The 2016 Mini Clubman wins with its charming, quirky looks, plucky road manners and new adult-sized interior, but it lost me with its ergonomically challenged cabin and frustrating controls.

Versus the competition: The new Clubman delivers a strong one-two punch in style and driving fun, beating compact rivals such as the Mazda3 hatch, Ford Focus hatch and Volkswagen Golf SportWagen. Compare them here.

The Clubman took the 2015 model year off and returns for 2016 with new powertrains, more safety features, four real forward-opening doors and a much larger footprint. Compare the 2014 and 2016 models here.

Just to be as clear as possible when dealing with Mini’s weird (but improving) model names, the Clubman is basically a stretched version of Mini’s smallest coupe, called the Hardtop. The Mini Countryman is larger still and often is considered a small SUV. Current Clubman trim levels include the base Cooper and the more powerful Cooper S. I tested the Cooper.

Exterior & Styling
The redesigned Clubman still is unmistakably Mini; it wears the brand’s signature bright-eyed face with large disc headlights flanking a plumped-up hexagonal grille. One of the biggest changes is not quite noticeable from the front, however. For 2016, the Clubman trades the passenger side’s odd, tiny rear-hinged back door from the old model for a real door — and adds one on the driver’s side, too.

In back, the Clubman looks as if it was sat on; a sloping roofline, muscular haunches and smooshed taillights combine for a squat-looking profile. Despite the visual, the Clubman actually got a half-inch taller this year, and its length and width are up 12.4 and 4.6 inches, respectively. The larger footprint means more legroom and cargo room, but what hasn’t changed is how you access that cargo space: The new Clubman retains its hallmark barn-style double-door setup.

How It Drives
The small but mighty turbocharged 1.5-liter three-cylinder engine comes on strong from a stop after only a hint of lag, and has plenty of grunt left over for confident highway manners. Base Cooper models use the 134-horsepower, three-cylinder engine and S models upgrade to a 189-hp, turbocharged 2.0-liter four-cylinder. A six-speed manual transmission is standard; I tested the optional six-speed automatic transmission. Shifts are quick enough to remind you of the Clubman’s sportiness without feeling unrefined.

Although the Clubman ballooned in size, it still drives like a go-kart. Direct steering, crisp handling and excellent maneuverability are highlights of its sporty, connected-to-the-road personality. Although the Mazda3 and Golf SportWagen also are lively, the Clubman is far more agile and engaging.

But sometimes you don’t want to feel quite so connected to the road, and as with the outgoing Clubman, the new model’s firm ride is a liability. Its stiff suspension is unforgiving over bumps, with every ripple felt. Snow also is a foe; the Clubman lost traction and felt skittish in anything more than a light dusting. An all-wheel-drive option is coming, however; the ALL4 model will be available this spring.

In gas mileage, the Clubman disappoints. It’s not as efficient as competitors, or even as the outgoing Clubman, and Mini recommends premium fuel. Base automatic 2016 Clubmans are rated 25/34/28 mpg city/highway/combined, down 2 mpg from the 2014 model’s combined rating. Base automatic versions of the Mazda3 hatch (30/40/33) and Ford Focus (26/38/30) are rated much higher; the SportWagen returns similar mileage (25/35/29).

Interior
The new Clubman retains the old model’s playful cabin design, as well as its form-over-function theme. A big circular multimedia screen is front and center, and LED accent lighting along with complementary trim patterns throughout the car add to a lively look. The interior’s black plastic surfaces are broken up by pops of plaid and chevron for an overall chic and funky design.

The look works, until you try to get comfy. A series of small ergonomic challenges combined to make this cabin most uncomfortable. There’s no shoulder belt height adjuster, so the strap awkwardly hugged my neck. Though Mini moved the driver’s seat recline lever from the much-criticized inboard side of the seat to the outboard side, it’s now under the seat belt strap, making it tough to use. While I did enjoy the extra-supportive driver’s seat and its adjustable bottom cushion extender, the heated seats are far too hot, even on the lowest setting … in February … in Chicago. Lastly, visibility ranges from awkward to bad. The Clubman’s low roofline forced me to crouch to see some traffic signals, and its vertically split rear window impeded my view.

Backseat room has improved, however. For 2016, the Clubman has a three-position backseat, instead of just two. The middle spot is narrow and not adult-friendly, but the outboard passengers are treated to adult-sized headroom and legroom this year. Rear legroom is up 2 inches from the previous Clubman, but it’s still shy of what some competitors offer. The Volkswagen SportWagen and Mazda3 have over an inch more space, though the Focus hatchback has around an inch less.

Ergonomics & Electronics
In some ways, Mini toned down the Clubman’s controls, but it’s not enough. The huge center-mounted speedometer and console-area window switches have been moved to more logical places, but other oddities persist. The start button’s position under the climate controls feels awkward, the climate control toggle switches take some getting used to and the multimedia system can be a headache.

A 6.5-inch screen is standard; I tested the optional 8.8-inch display. I appreciated its large screen, sharp graphics and split-screen mode that shows radio and navigation info side by side. However, the system’s console-area knob controller isn’t in a comfortable place and using it instead of a touch-screen takes longer and pulls more focus from the road.

Audio functions were easy thanks to a volume knob and tuning buttons under the screen, as well as “menu” and “back” buttons near the controller knob. Using the navigation system was less intuitive. To input an address, you have to use the knob to select each letter and number, or use the voice command system. The former took an obnoxiously long time, and I had mixed results with the latter. The first time I spoke my Chicago-area address, the system routed me to South Carolina. I found my way home on the second try.

The Clubman makes up for it with a couple of handy features that make the space more usable. An easy flip-up cover reveals an under-floor storage bin, and there are several grocery and cargo hooks back there. Questionable ergonomics strike again, however, with the Clubman’s barn-door hatch. Instead of a traditional one-piece liftgate that opens upward, the double doors swing back and then outward, making them a liability in parking lots. Foot-swipe-activated power cargo doors are an option I was unable to test.

Safety
At this writing, the 2016 Mini Clubman has not yet been tested by the National Highway Traffic Safety Administration or the Insurance Institute for Highway Safety.

A backup camera is optional on both models. Other safety options include adaptive cruise control, forward collision and pedestrian warning with automatic emergency braking and road-sign detection. Lane departure warning and blind spot detection are unavailable. Click here for a full list of safety features.

Value in Its Class
The Clubman’s footprint isn’t the only thing that ballooned for 2016; it starts at $24,950, including destination, which is nearly $3,000 more than the old Clubman’s base price and about $5,000 more than base versions of the Focus and Mazda3 hatchbacks. The Golf SportWagen starts at around $2,500 less than the Clubman.

With four actual passenger doors and more room, the 2016 Clubman is far more practical than the outgoing model and still offers a fun factor unmatched in the class. While all that is likely to attract more mainstream buyers, the Clubman still has many quirks only an enthusiast would love.