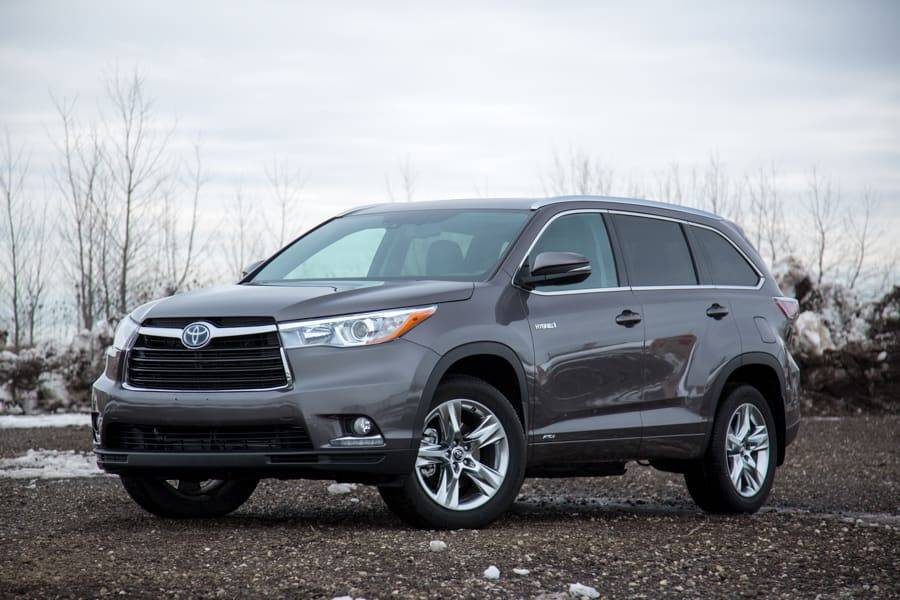 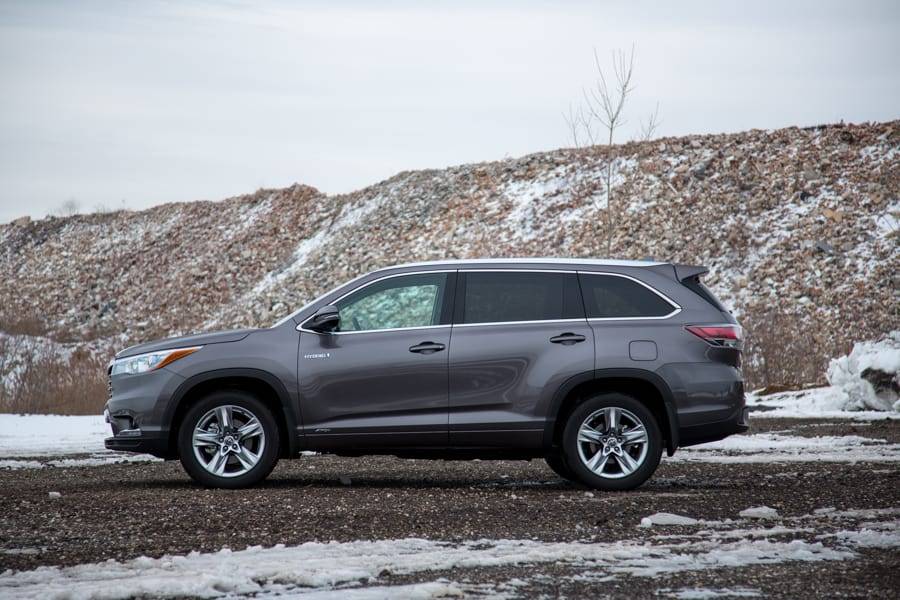 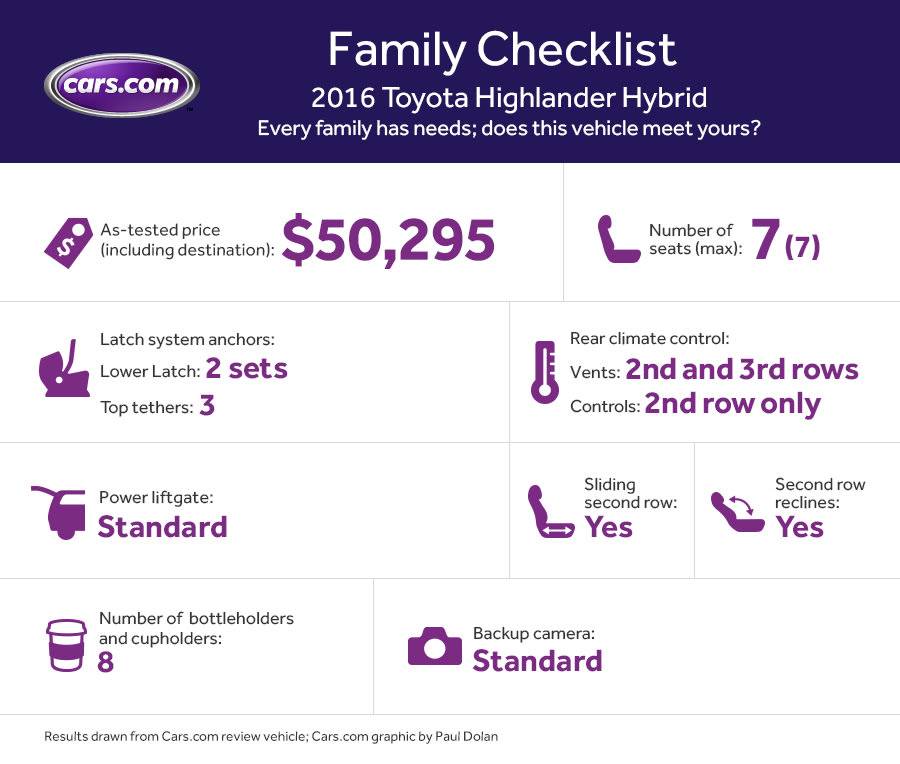 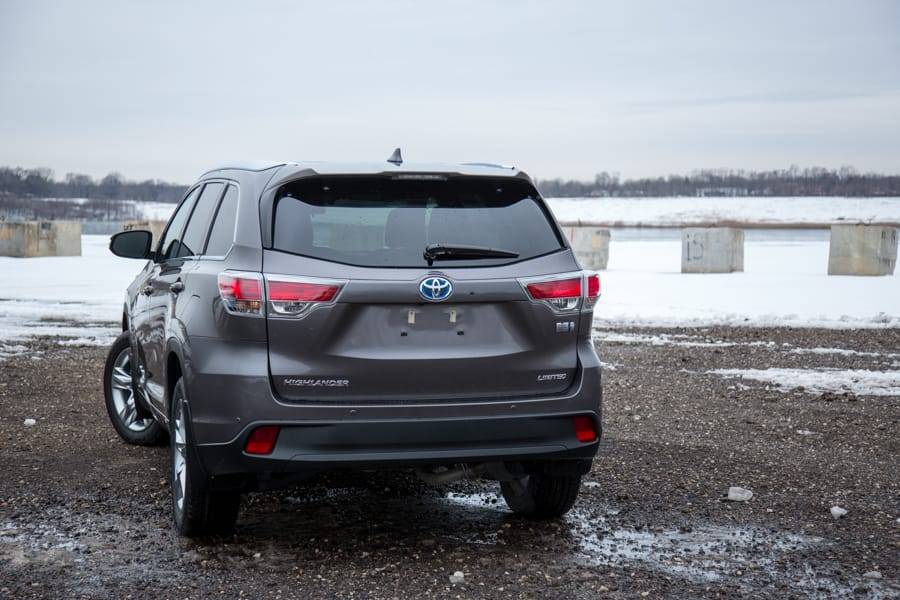 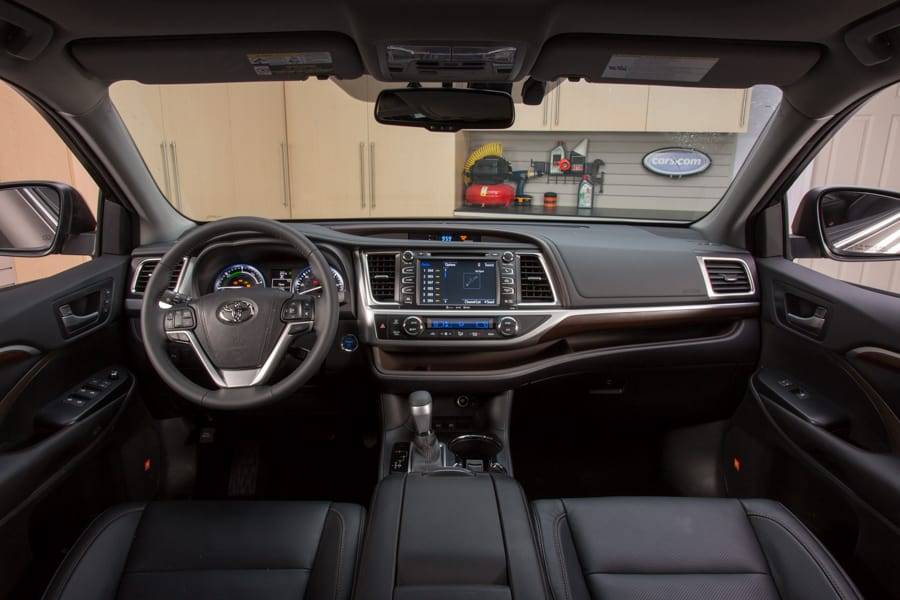 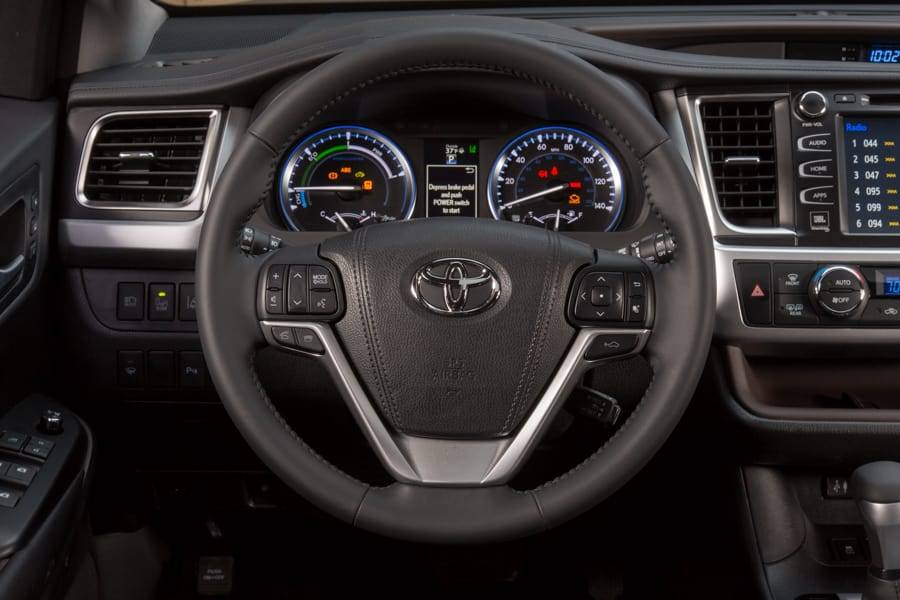 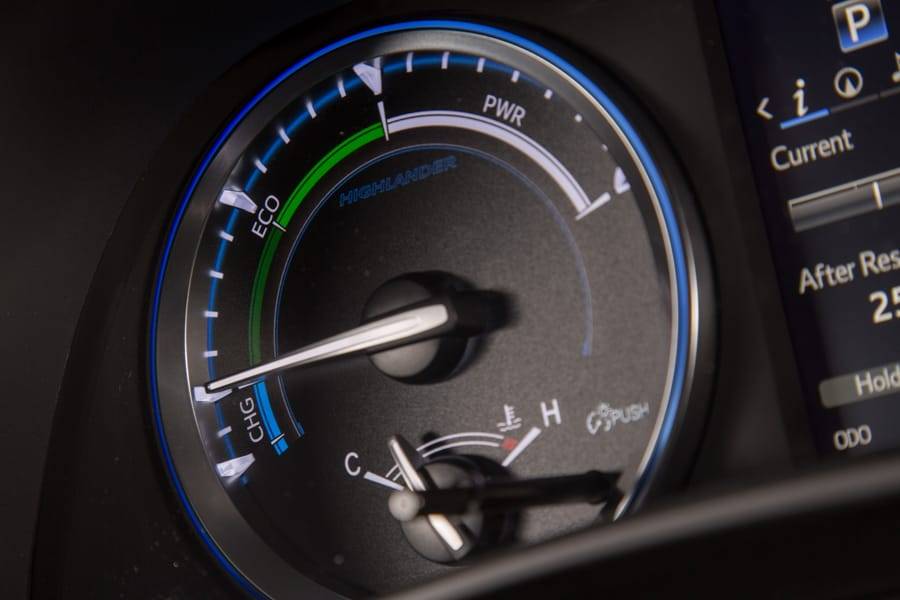 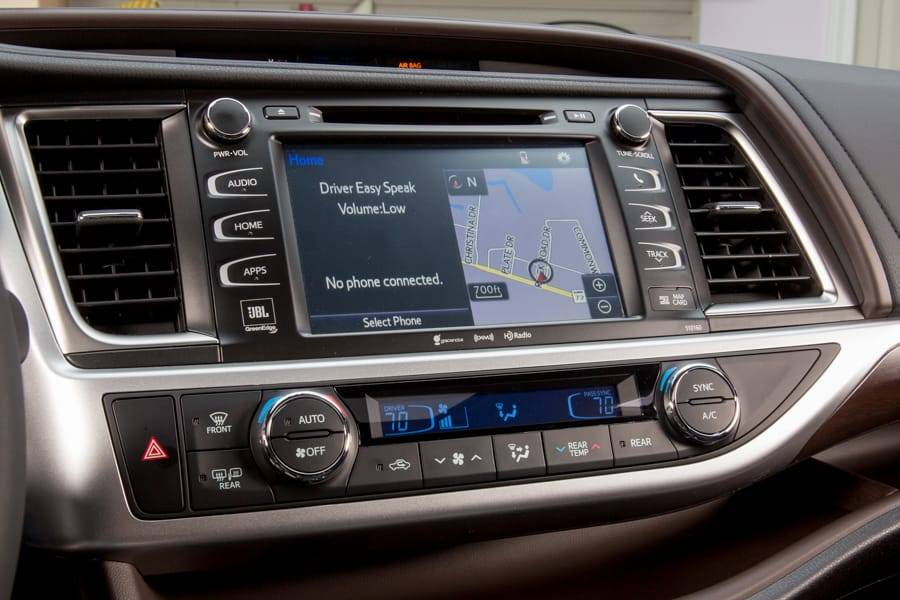 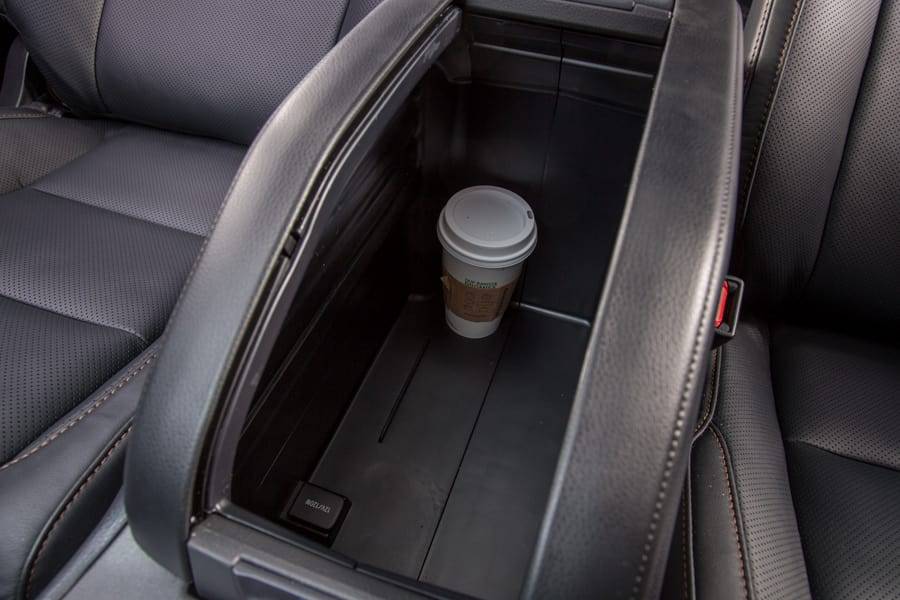 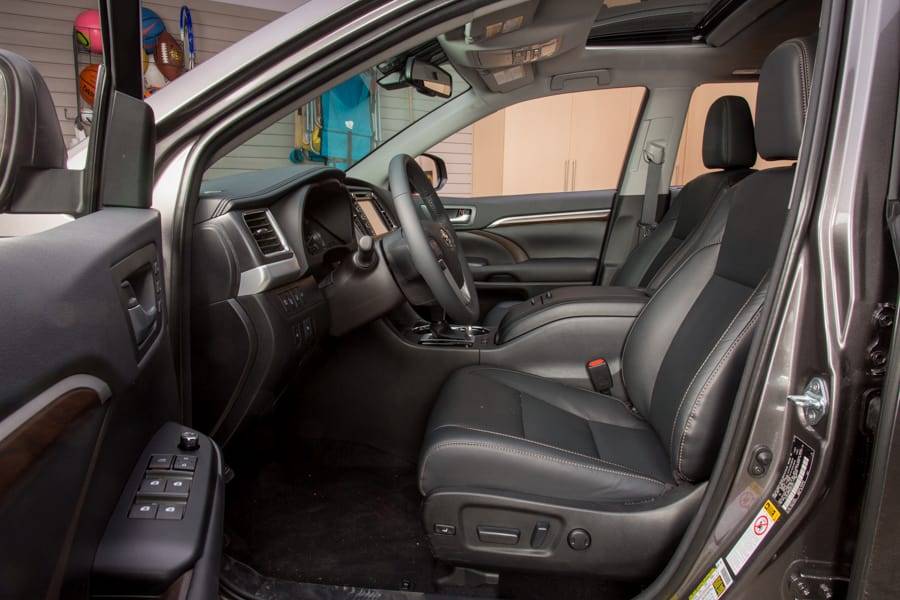 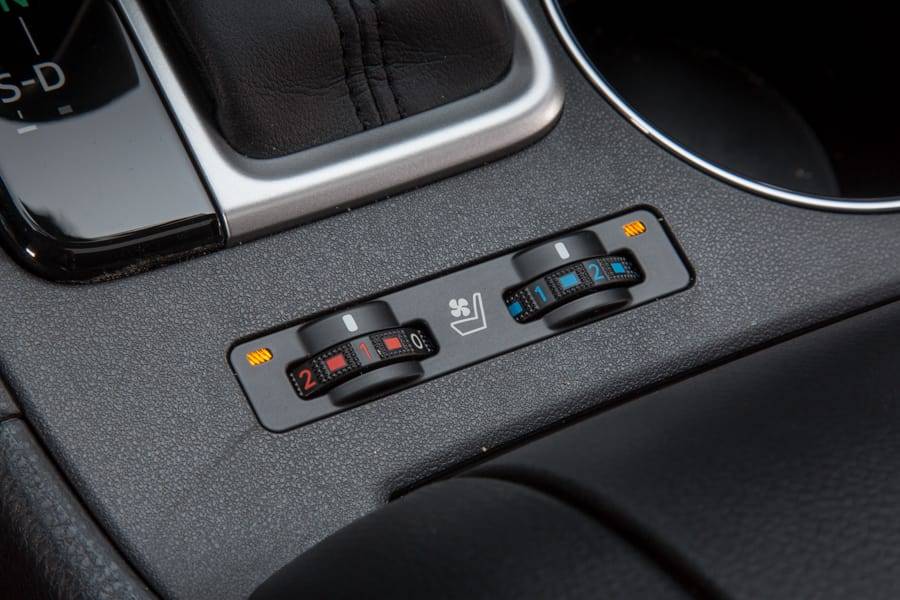 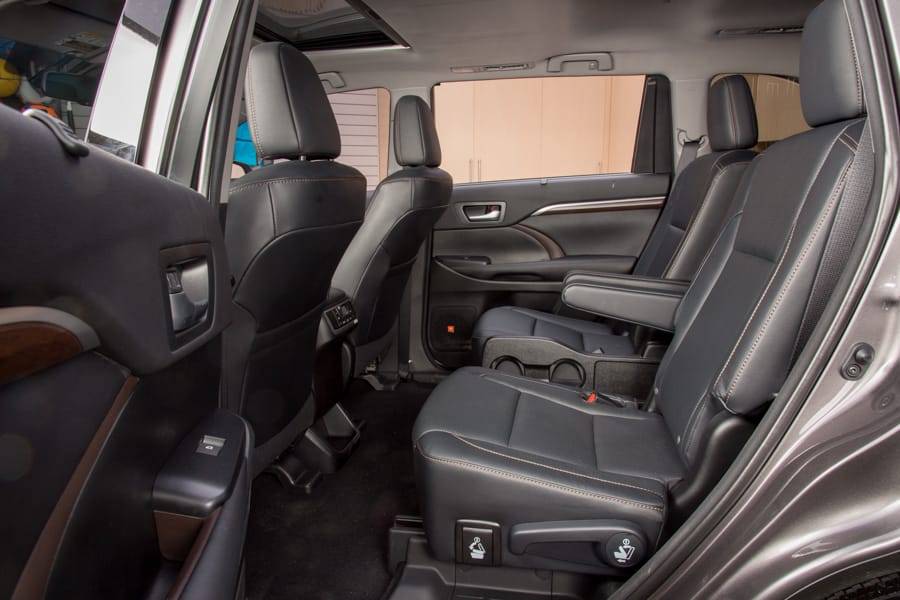 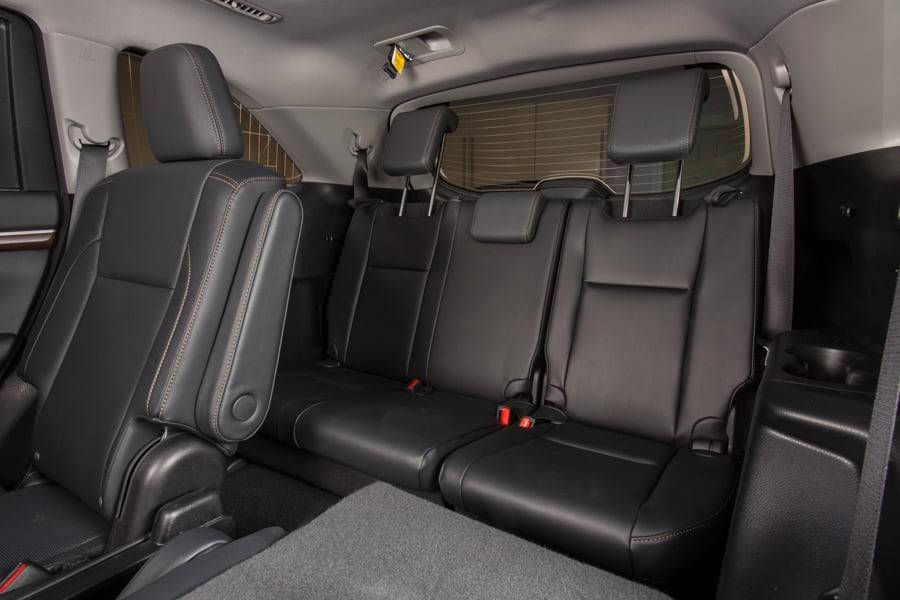 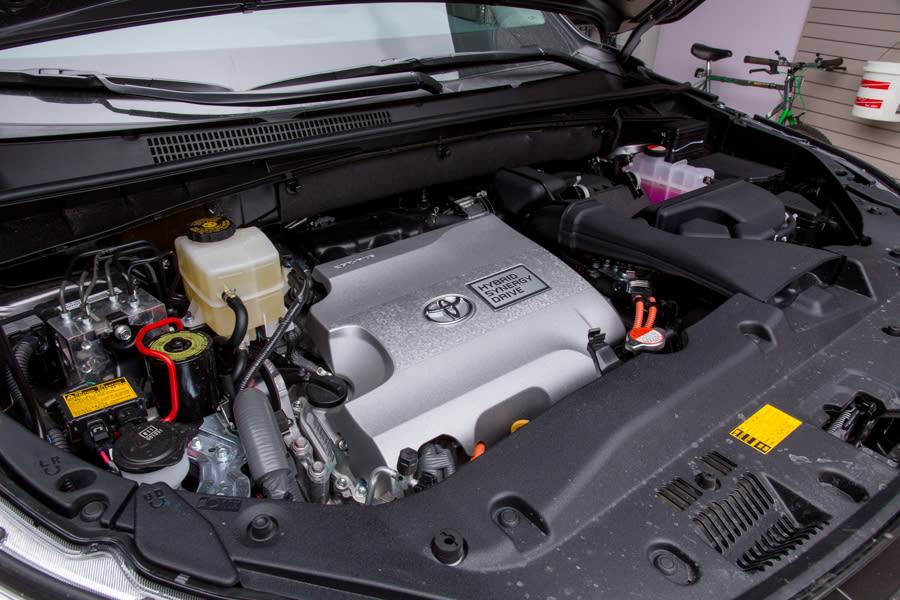 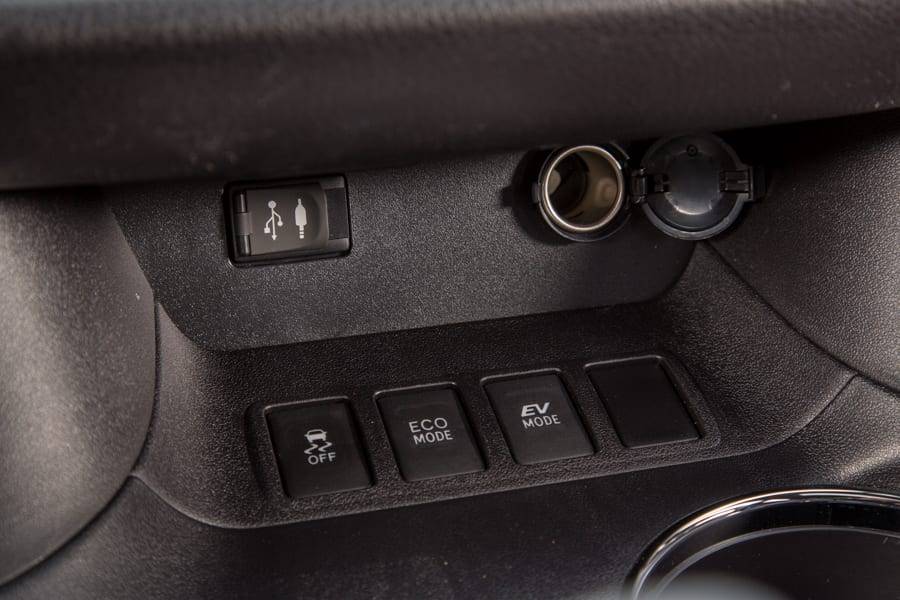 The verdict: The 2016 Toyota Highlander is a very good family SUV with three rows of seats, but the appeal of the expensive hybrid version is limited.

Versus the competition: The pricey Highlander Hybrid improves gas mileage by roughly a third over most conventional three-row SUVs. It has no direct competitors, and $2-a-gallon gas means it probably won’t for some time to come.

Exterior & Styling
Now in its third model year, the third-generation Highlander has aged well. Aside from some hybrid badging and a blue tint on the Toyota badges, the gas-electric version looks indistinguishable from a non-hybrid Highlander Limited. Fog lights, LED daytime running lights and 19-inch alloy wheels are standard.

How It Drives
The V-6 Highlander is no slowpoke, but the Highlander Hybrid is flat-out quick. Its drivetrain combines a V-6 and electric motors to drive the front and rear wheels for a total of 280 horsepower — similar to the regular Highlander’s V-6 output. Thanks to the robust torque from its electric motors, though, it’s even punchier in the passing lane. Head-to-head, the Highlander Hybrid could outrun a lot of sedans. And its fuel efficiency would rival them, too: EPA-estimated gas mileage comes to 28 mpg combined. That’s 27 to 40 percent better than the regular Highlander’s 20 to 22 mpg, depending on the variant. Both types use regular gasoline.

Our editors’ only complaint was ride quality. The SUV’s suspension isolates the cabin well enough over normal pavement, but it responds to manhole covers and other ruts with too much body movement. As one editor put it, it’s the sort of experience cars usually impart before an update or redesign improves chassis rigidity.

All-wheel drive is standard, but it’s a light-duty system. Some moderate snow and mud proved nearly too much for our test car, whose right wheels spun hopelessly while the left ones — which had far better traction — sat motionless. I was eventually able to coax the SUV out by rocking it back and forth. The regular Highlander has an all-wheel-drive locking mode to split power evenly between the front and rear wheels, which might help in certain situations (though not necessarily this one).

Interior
The Highlander Hybrid, like its non-hybrid sibling, gets high marks inside. The cabin is nearly luxury-level, with lush materials along the dash and doors, plus premium touches such as fabric-wrapped A-pillars and one-touch express windows.

Rather than the regular Highlander’s three-seat second row, the Highlander Hybrid has two captain’s chairs split by a mini-console that folds down easily to form a center aisle. The second row has plenty of room, albeit it’s in a somewhat low seating position. Both seats offer sliding access to the third row — a must-have feature for families, as some SUV second rows still tilt and tumble forward to provide access.

The third row has three seats for a supposed total of seven, but that idea seems farfetched. Three toddlers would feel cramped in the back row. Headroom is tight no matter what; many adults will have to slouch.

Ergonomics & Electronics
The Highlander Hybrid’s center controls have a few ergonomic bungles. The touch-sensitive shortcut keys and stubby knobs require a degree of dexterity that’s difficult on the fly — and could be worse if you have gloves on. A panoply of standard multimedia features includes an 8-inch navigation system, Bluetooth phone and audio streaming, JBL premium audio, HD and satellite radio, Siri Eyes Free compatibility and Toyota’s Entune app suite, which integrates a few apps off a compatible smartphone (including Yelp, OpenTable, MovieTickets.com and various Internet radio services). Despite all that, however, Apple CarPlay and Android Auto are unavailable.

A Blu-ray DVD rear entertainment system with a drop-down 9-inch screen is optional. Parents should also check out Toyota’s Driver Easy Speak system, which can pick up a driver’s voice via microphone and play it through the third-row speakers — so you can holler at the peanut gallery without, you know, hollering.

Cargo & Storage
It’s good to see the Highlander’s move upmarket didn’t leave practicality behind. The SUV’s mammoth center console has a wide, padded roll-top cover that opens in two sections. A deep, recessed shelf spans most of the dashboard, enabling easy storage for phones, wallets or sunglasses. The cupholders have self-adjusting grips to stabilize travel mugs of almost any size.

Cargo space behind the third row is 13.8 cubic feet — small for the class — but it grows to a more competitive 83.2 cubic feet of maximum space with the second and third rows folded (it’ll be 0.6 cubic feet less with the panoramic moonroof). That’s the same as the regular Highlander. One annoyance: The seats fold in a multistep process that’s a little more cumbersome than in some other SUVs. If you frequently need to convert between passenger and cargo room, take note.

Maximum towing capacity is a modest 3,500 pounds in the Highlander Hybrid, down from the regular Highlander’s 5,000 pounds.

Safety
With a few exceptions, the Insurance Institute for Highway Safety says crash-test scores for most vehicles carry over to their hybrid counterparts. The Highlander earned a score of acceptable in IIHS’ small-overlap front test — one rung below the agency’s top score, good, but better than the scores of a lot of three-row SUVs. The Highlander earned a score of good in all other major IIHS tests.

Among the standard safety features on the Highlander Hybrid (see them all here) are eight airbags, a blind spot monitor, a backup camera, rear cross-traffic alert and the required antilock brakes and electronic stability system. A forward-collision warning system with automatic braking is optional, as are lane departure warning and adaptive cruise control.

Go here to see our Car Seat Check for the third-generation Highlander. It’s also worth noting that the SUV is part of an increasing — though still relatively small — group of vehicles that can fit three child-safety seats across. (See the current group here.)

Value in Its Class
The Highlander is a well-executed family SUV that landed in third place out of seven contenders in Cars.com’s $40,000 3-Row SUV Challenge two years ago — and that was before the first- and second-place finishers received spotty crash tests, which doubtless would have tempered their scores. (Read more here.)

For family SUV shoppers, the Highlander is a must-drive.

The Highlander Hybrid, however, costs nearly $6,000 more than its equivalent non-hybrid variant. It’s a staggering $17,880 more than the cheapest version of the SUV. As of this writing, a gallon of regular gas is well under $2 nationwide. Unless that changes, it’s hard to build a case for choosing a Highlander Hybrid over its much cheaper sibling.