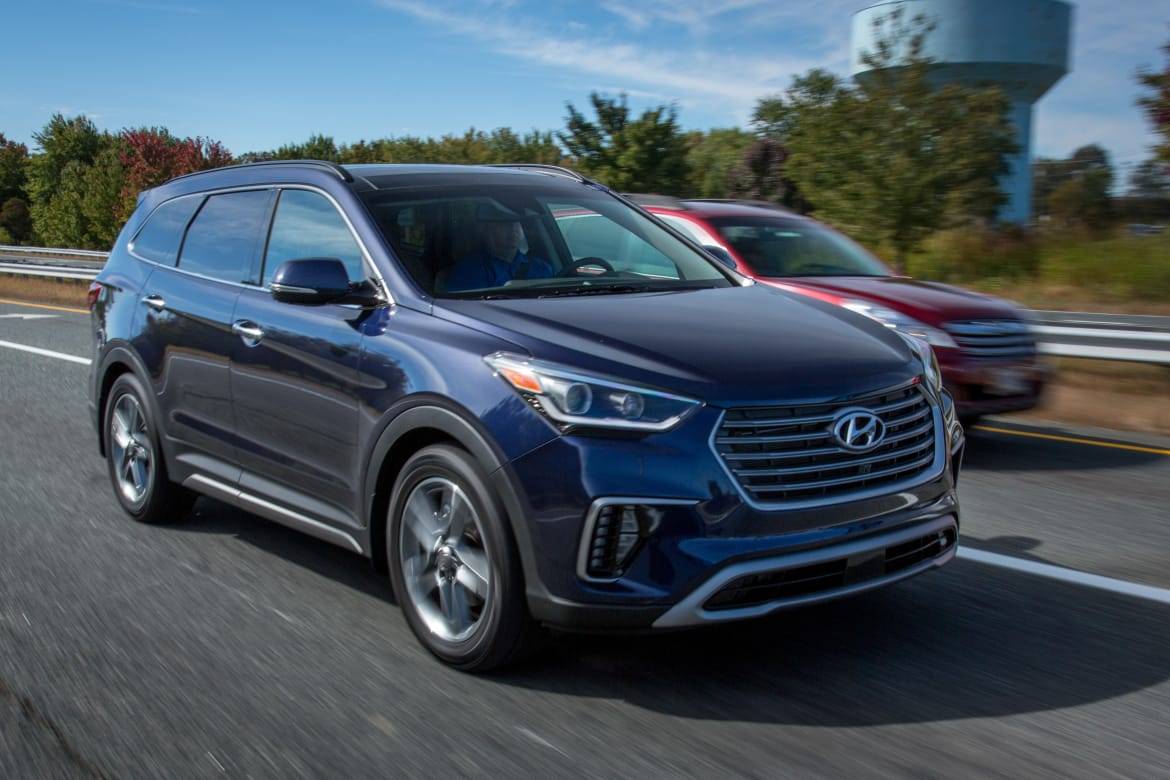 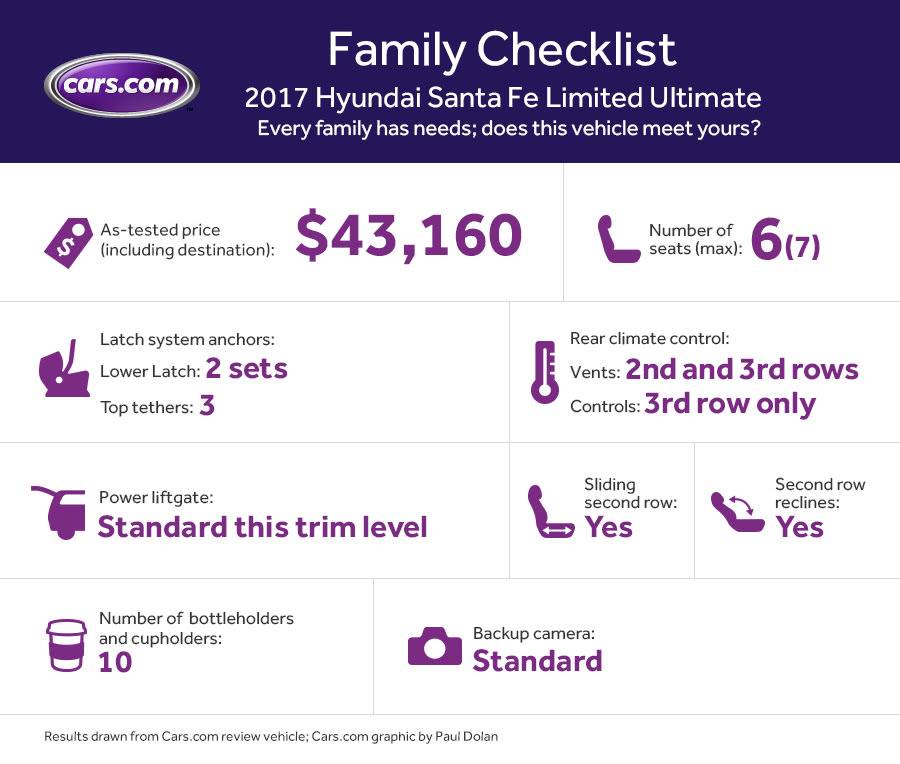 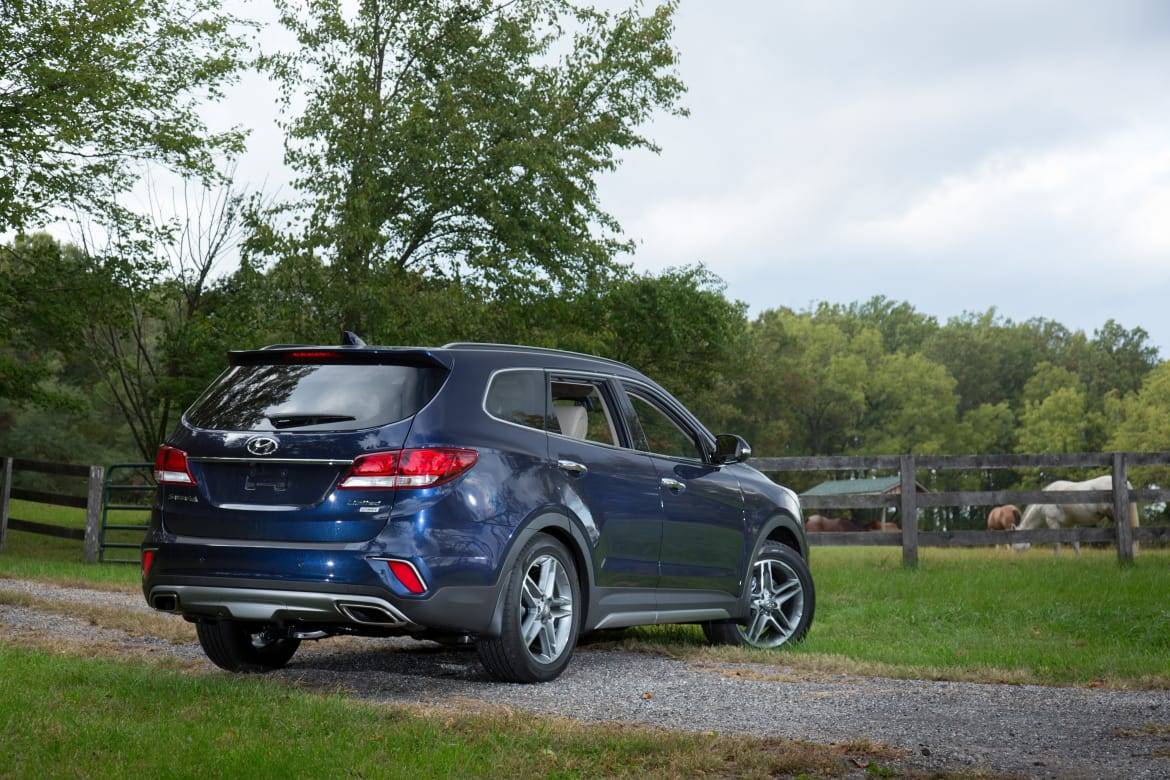 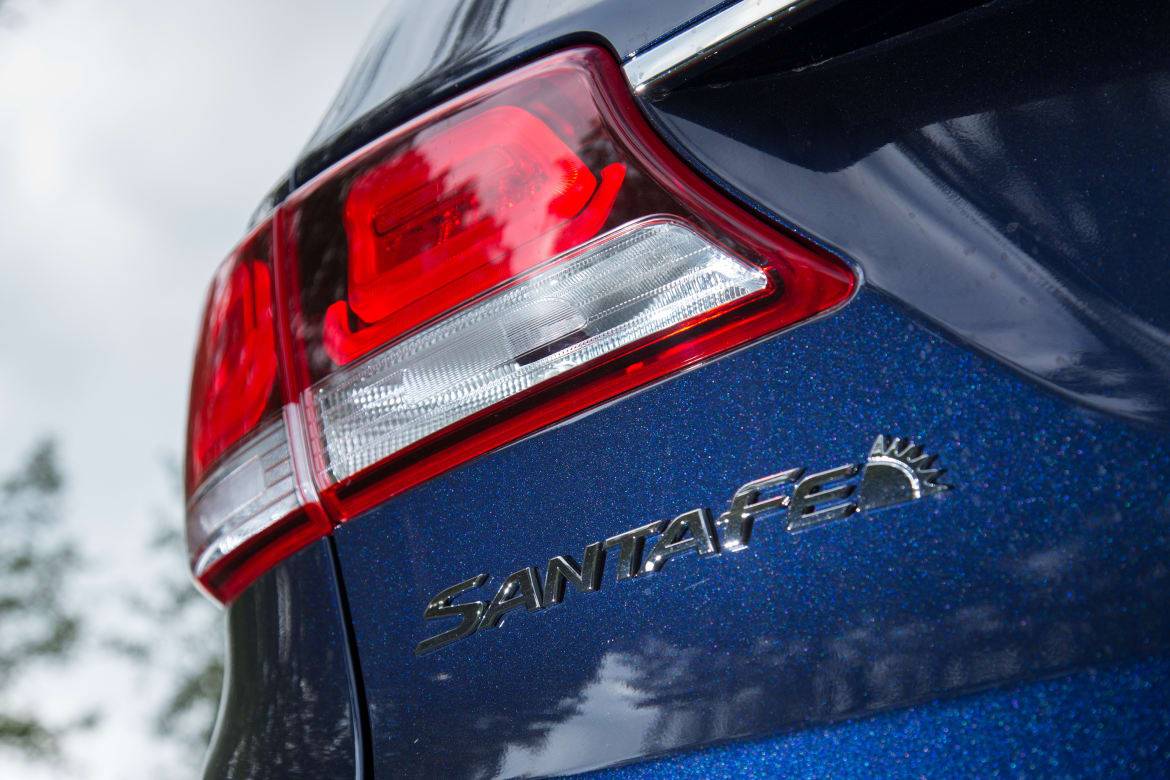 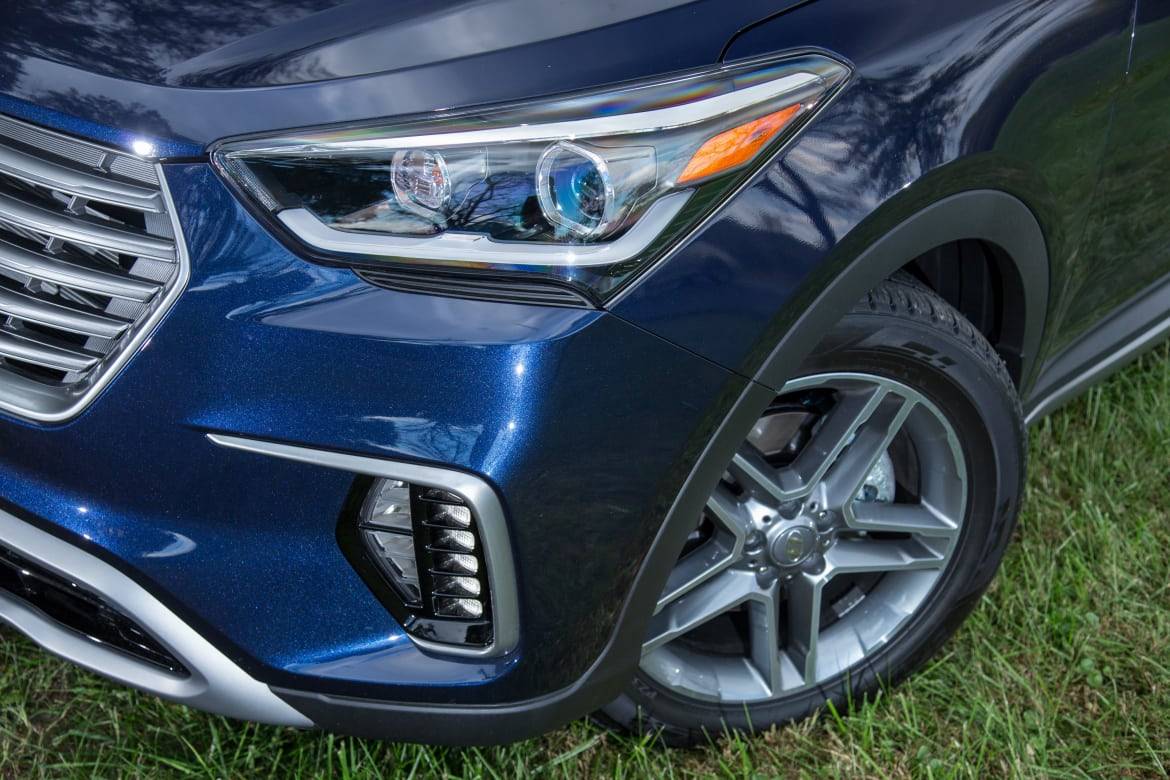 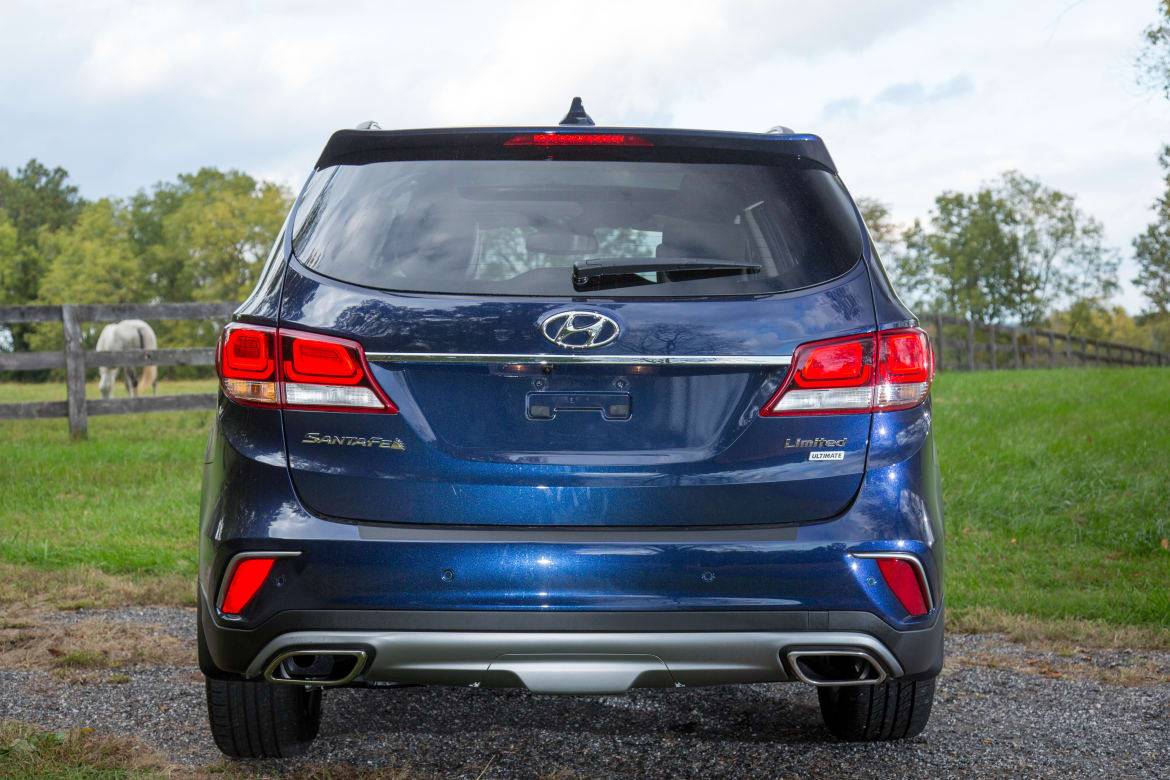 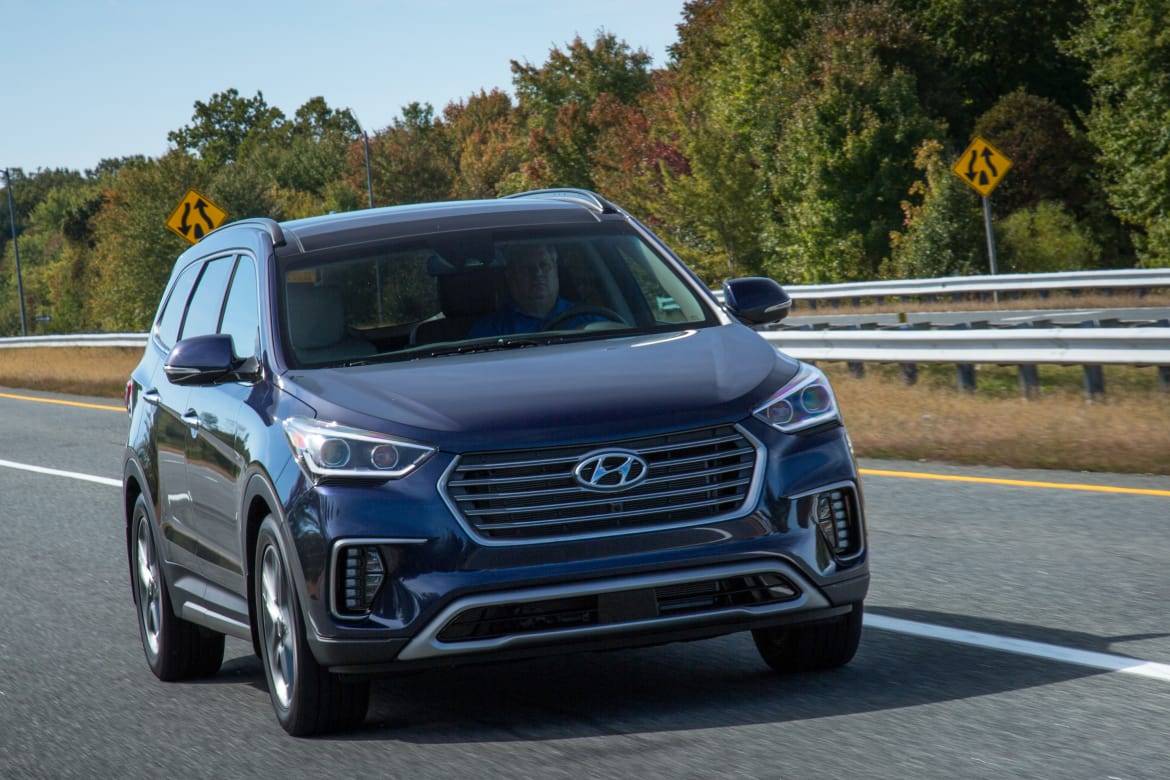 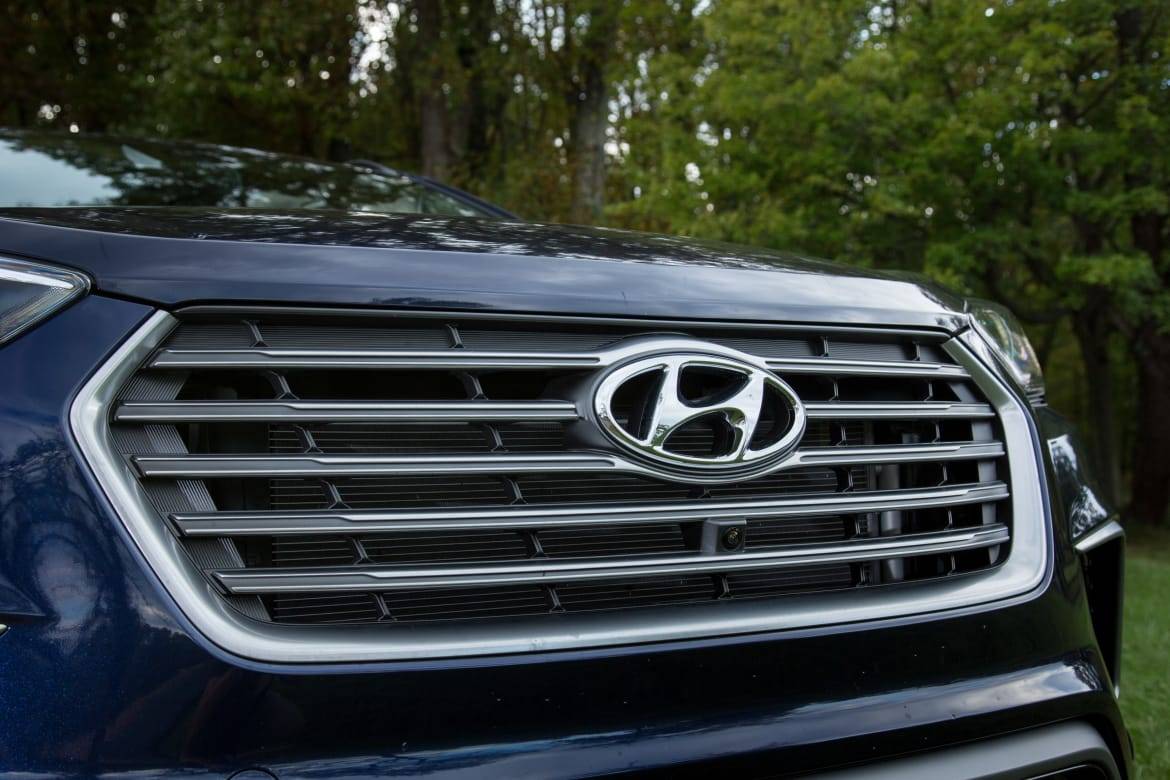 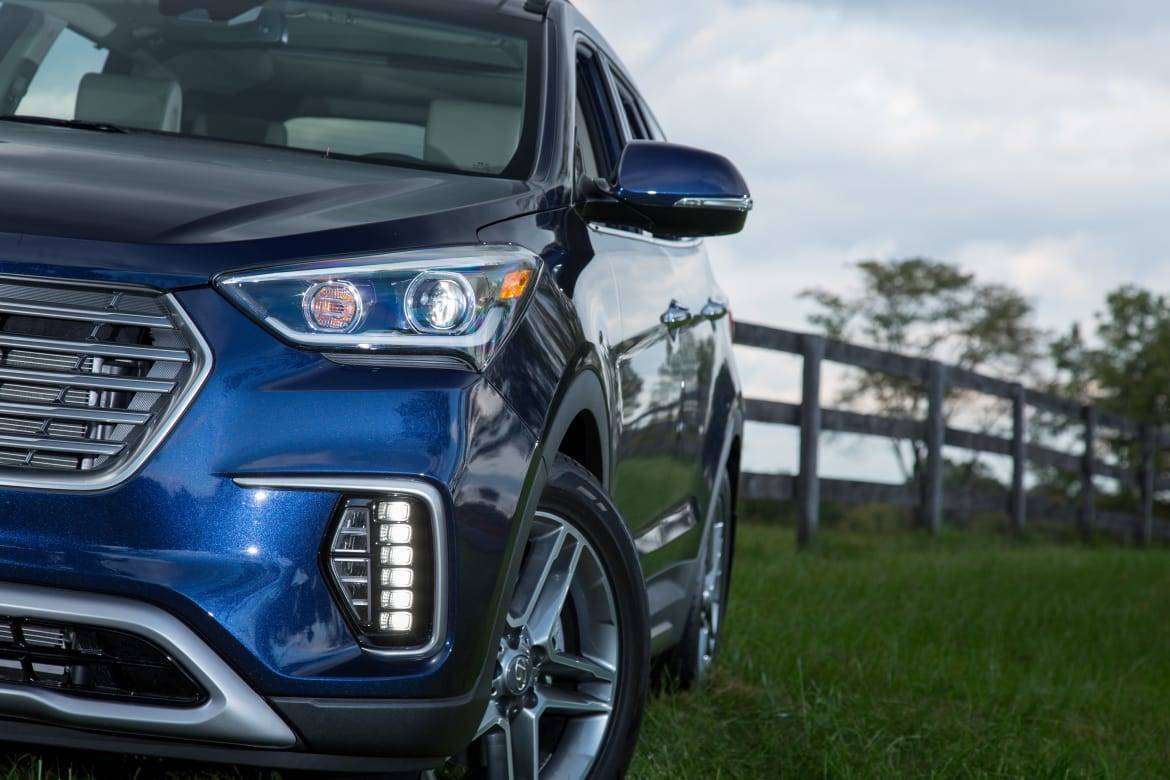 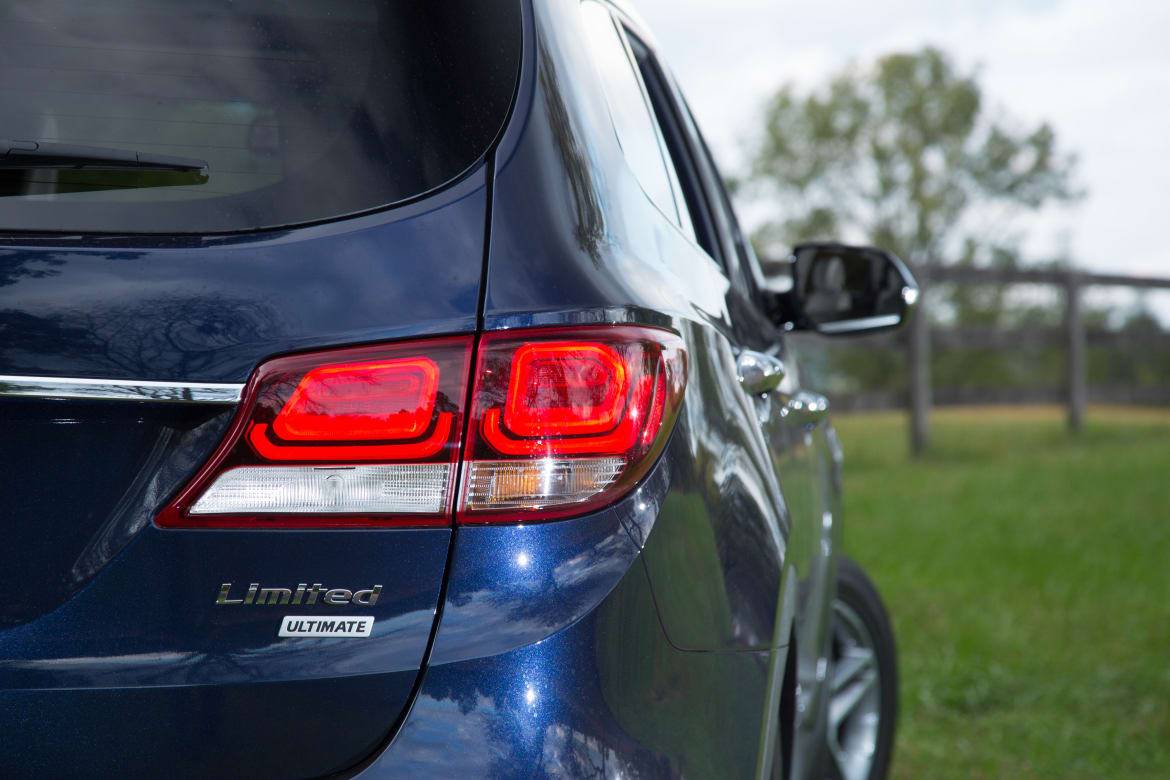 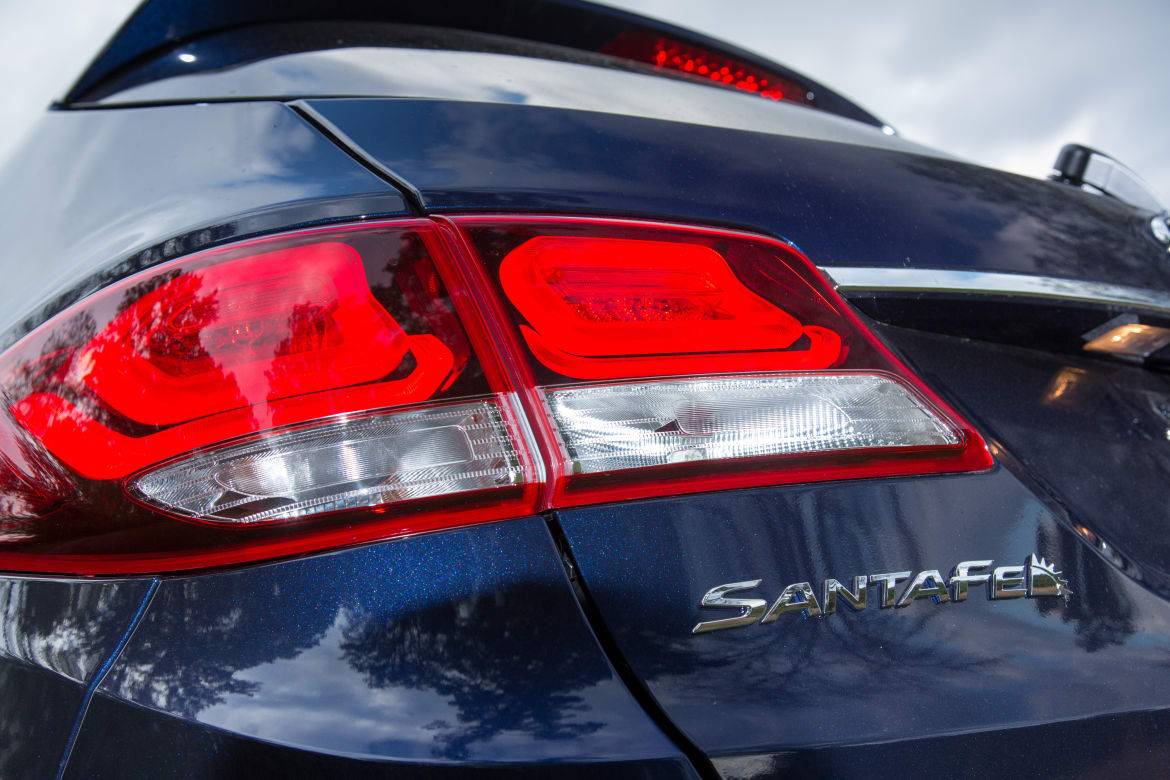 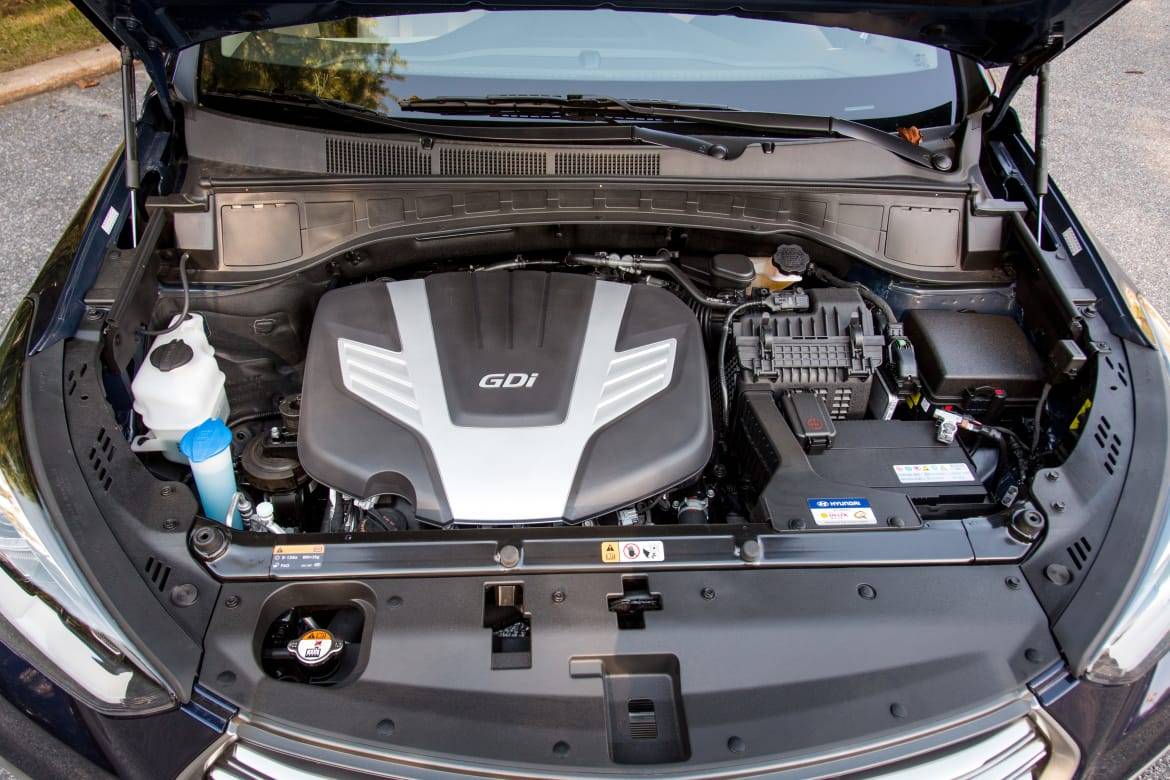 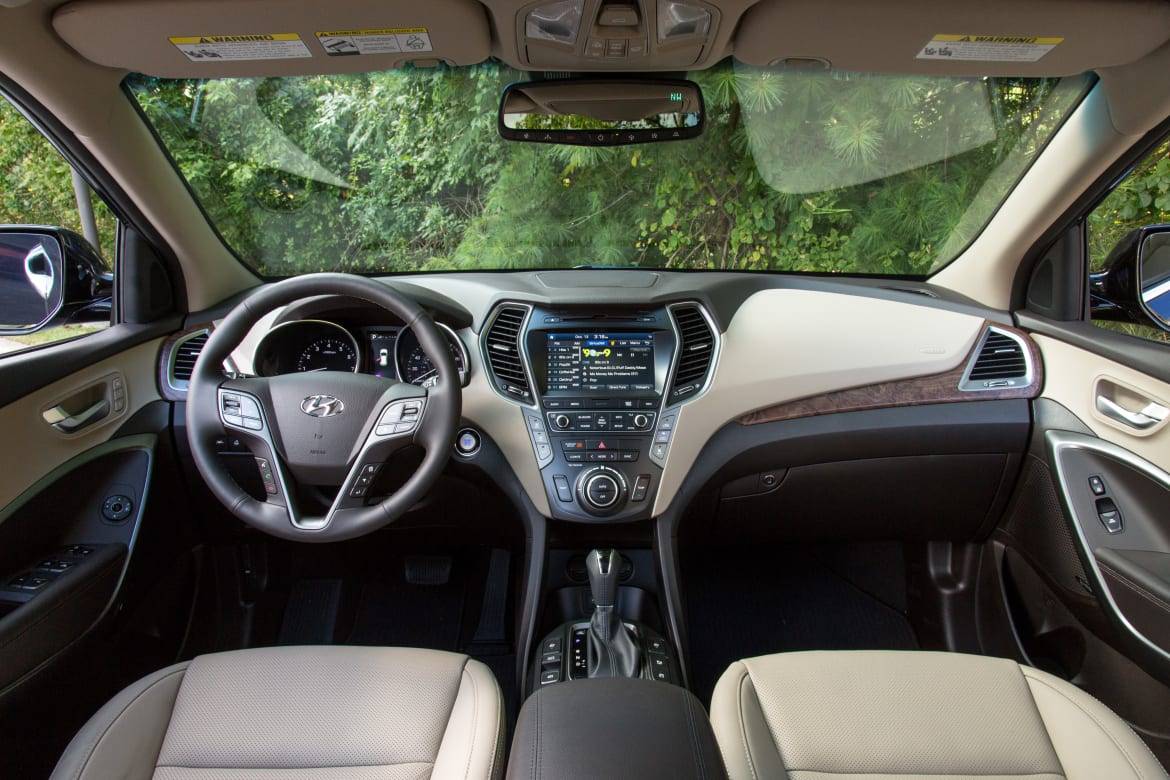 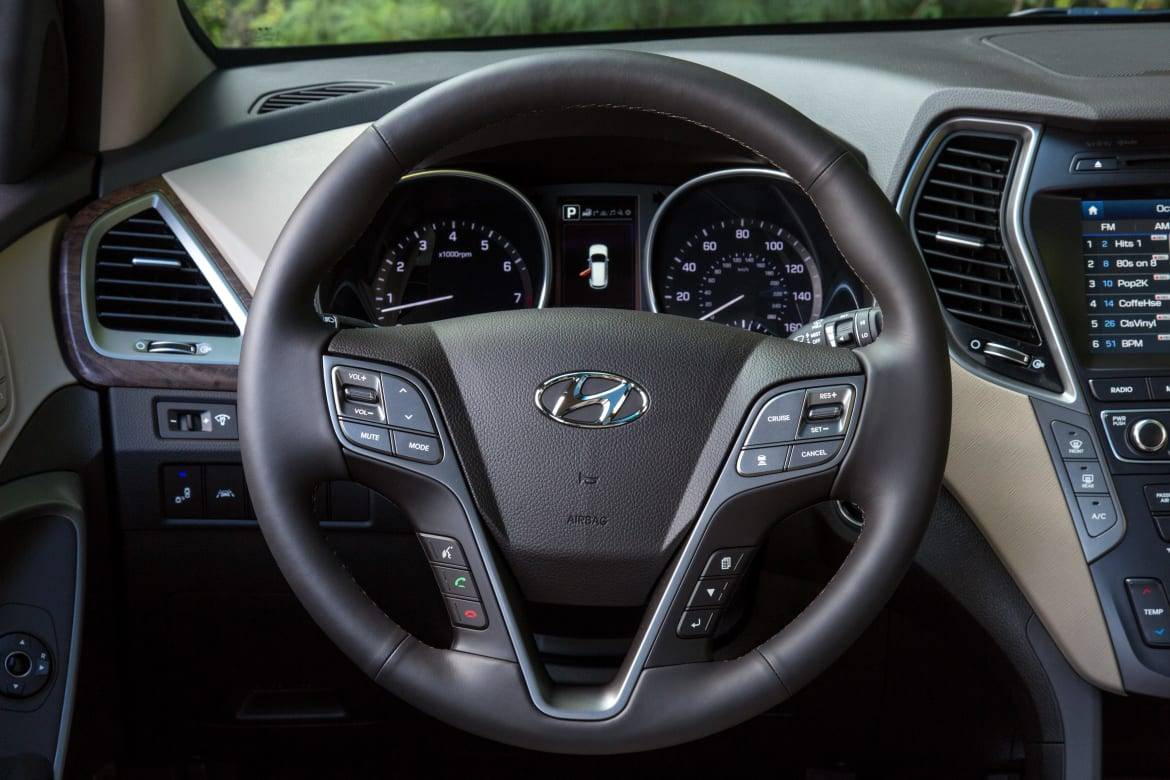 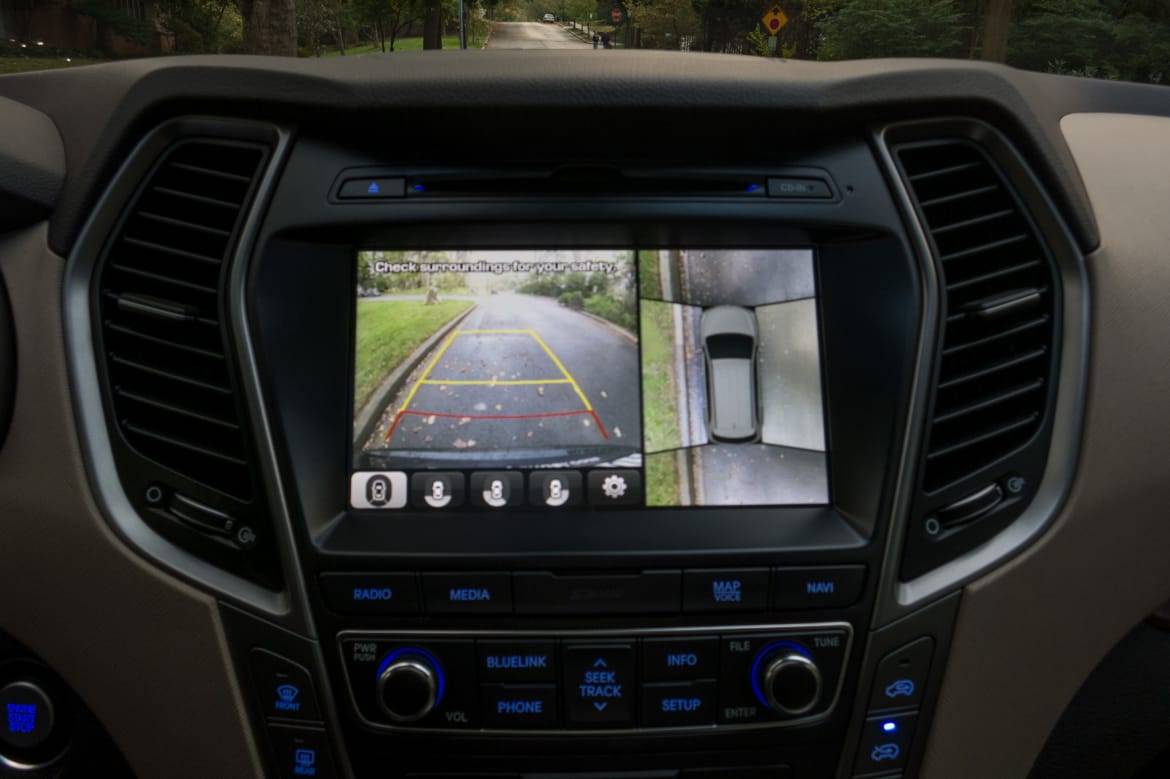 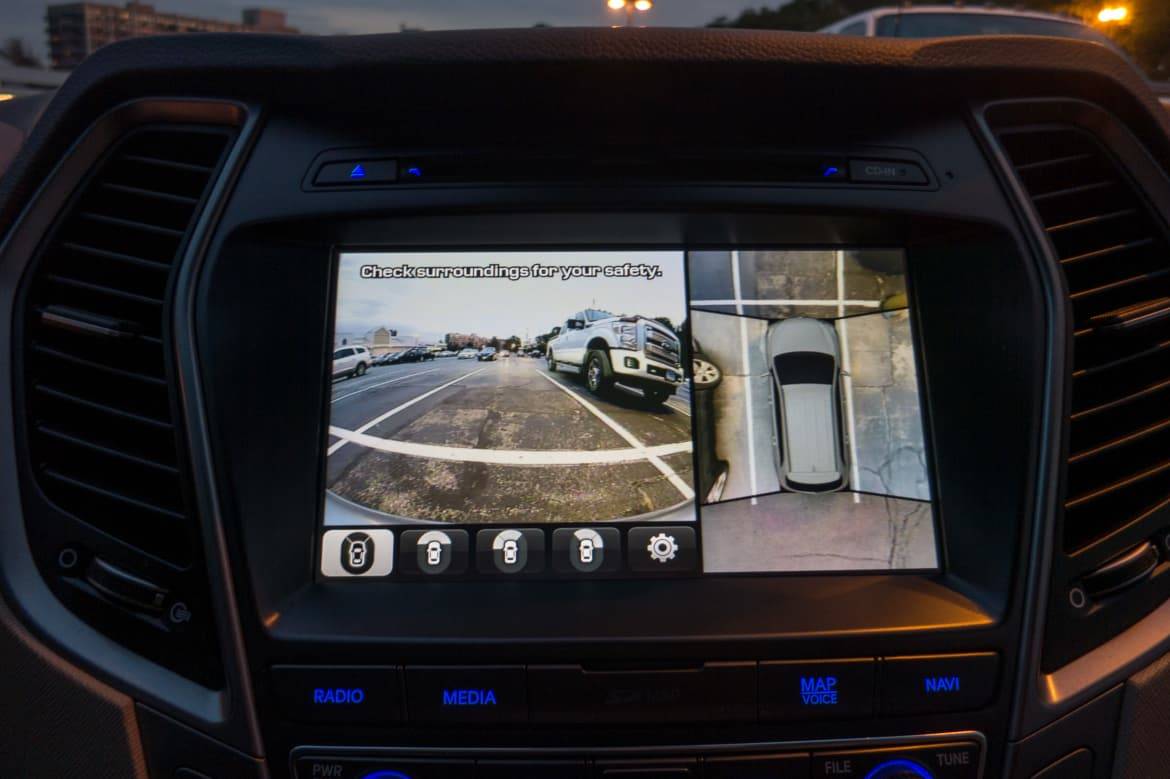 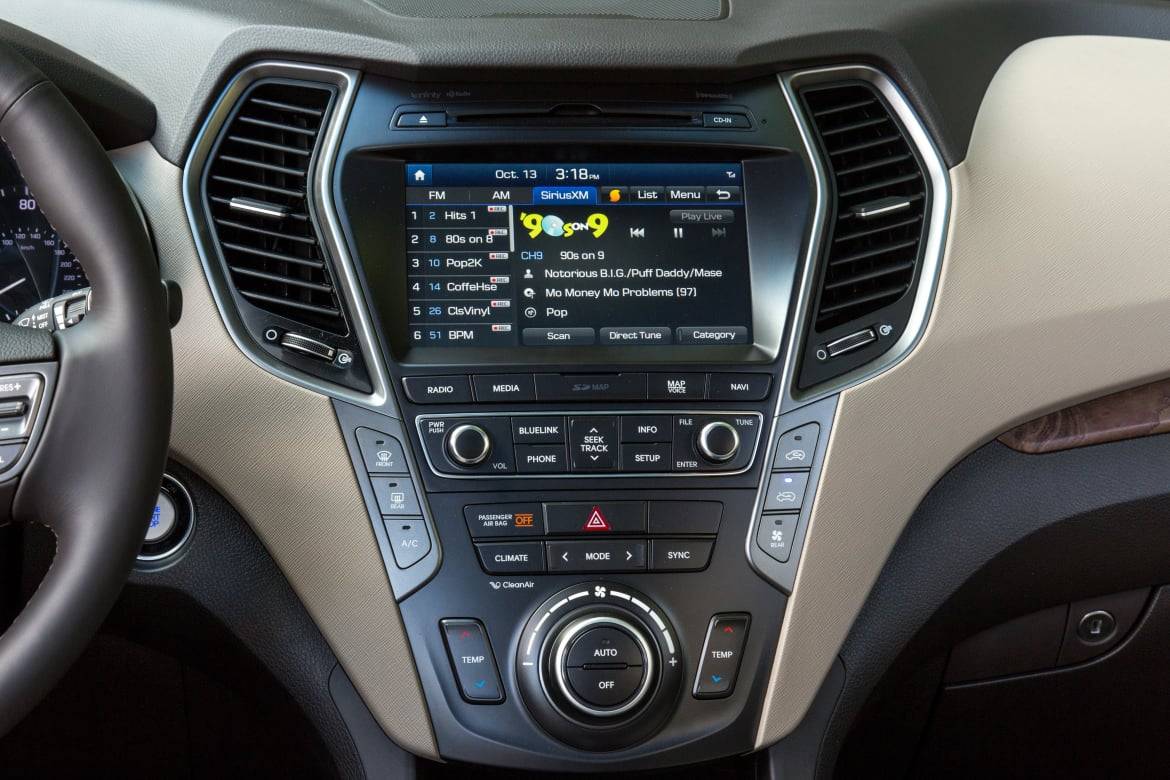 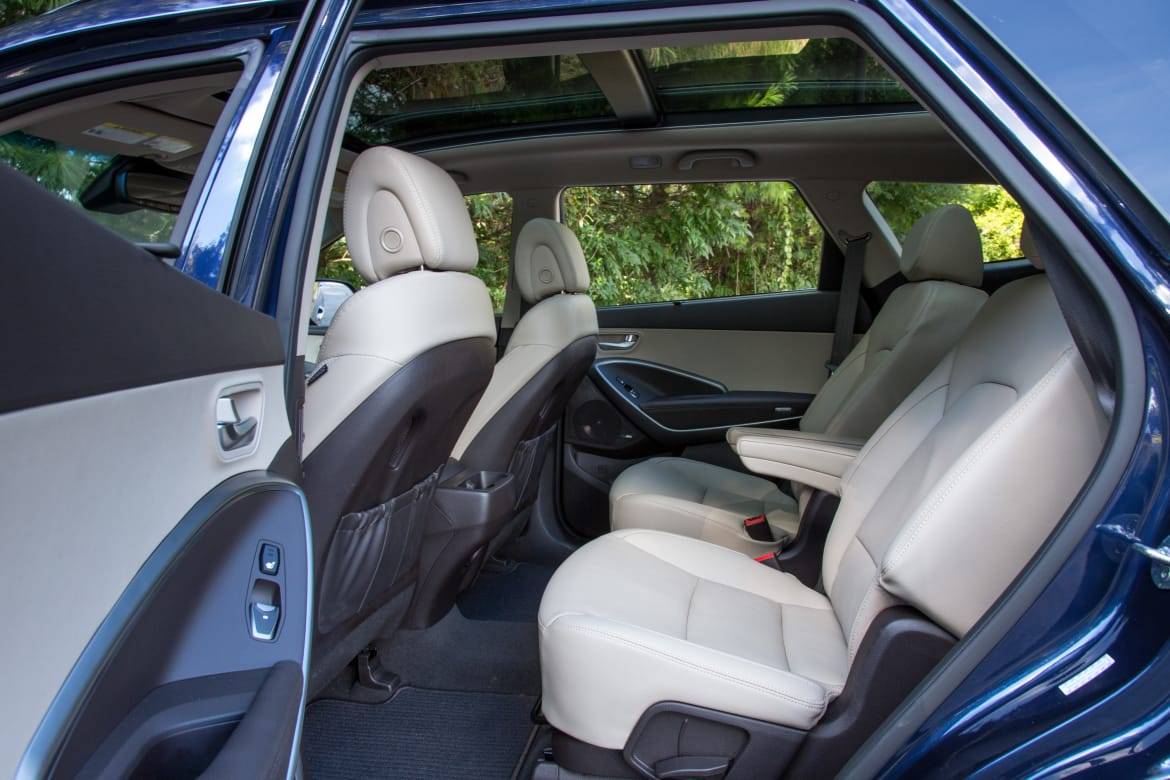 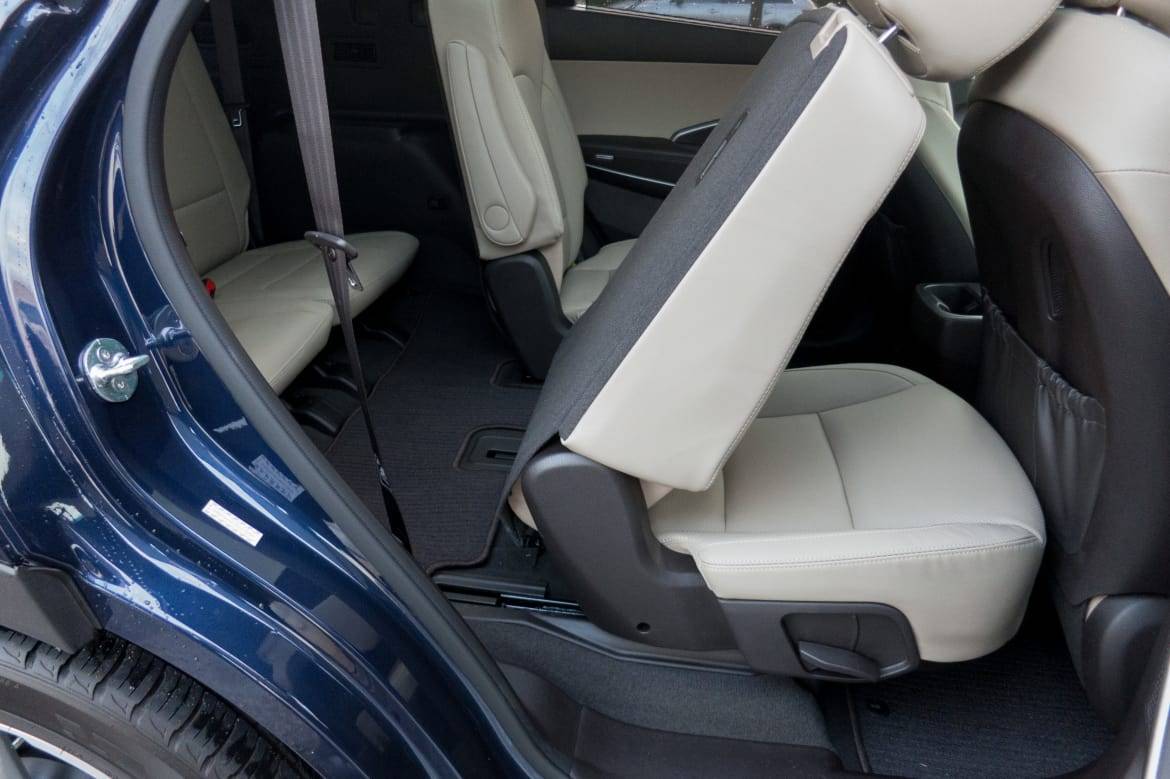 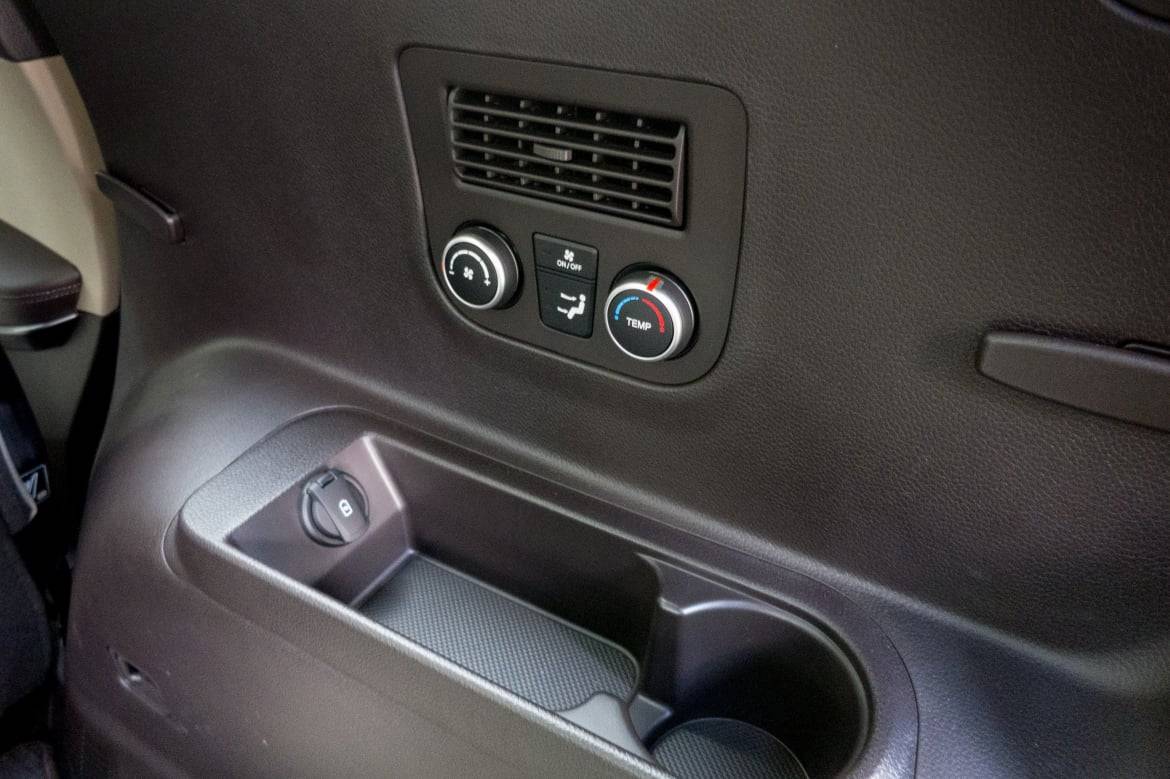 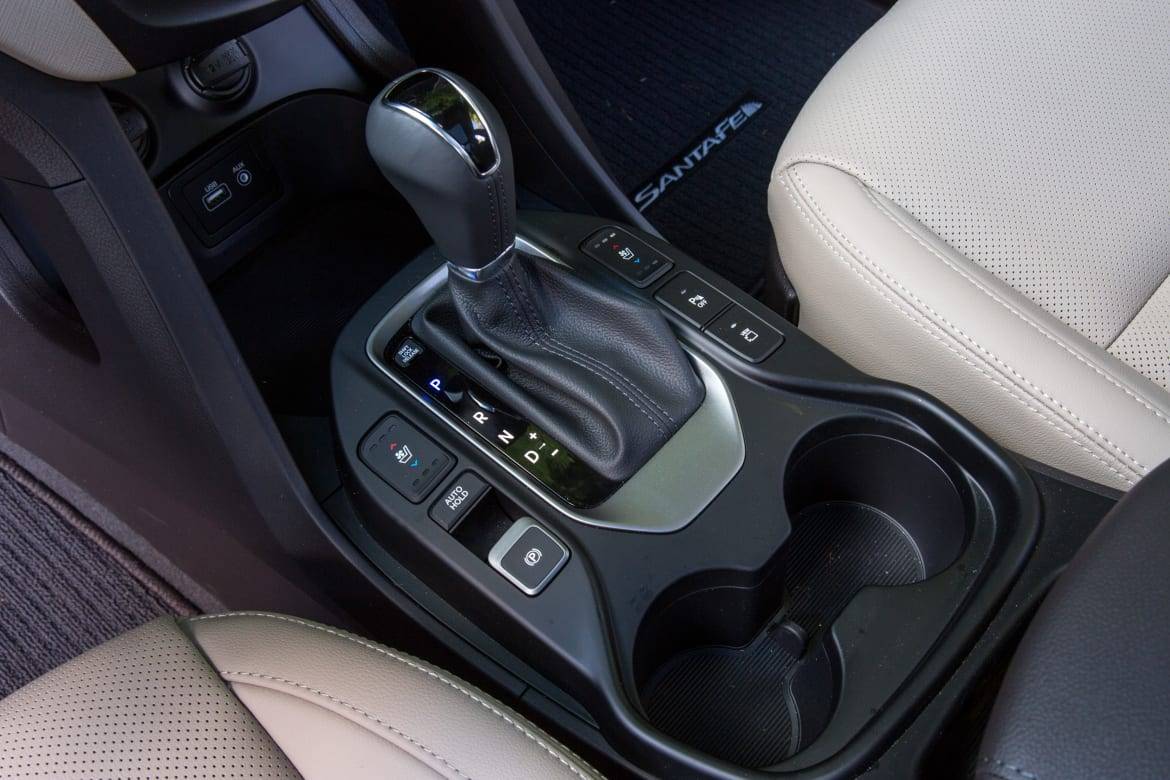 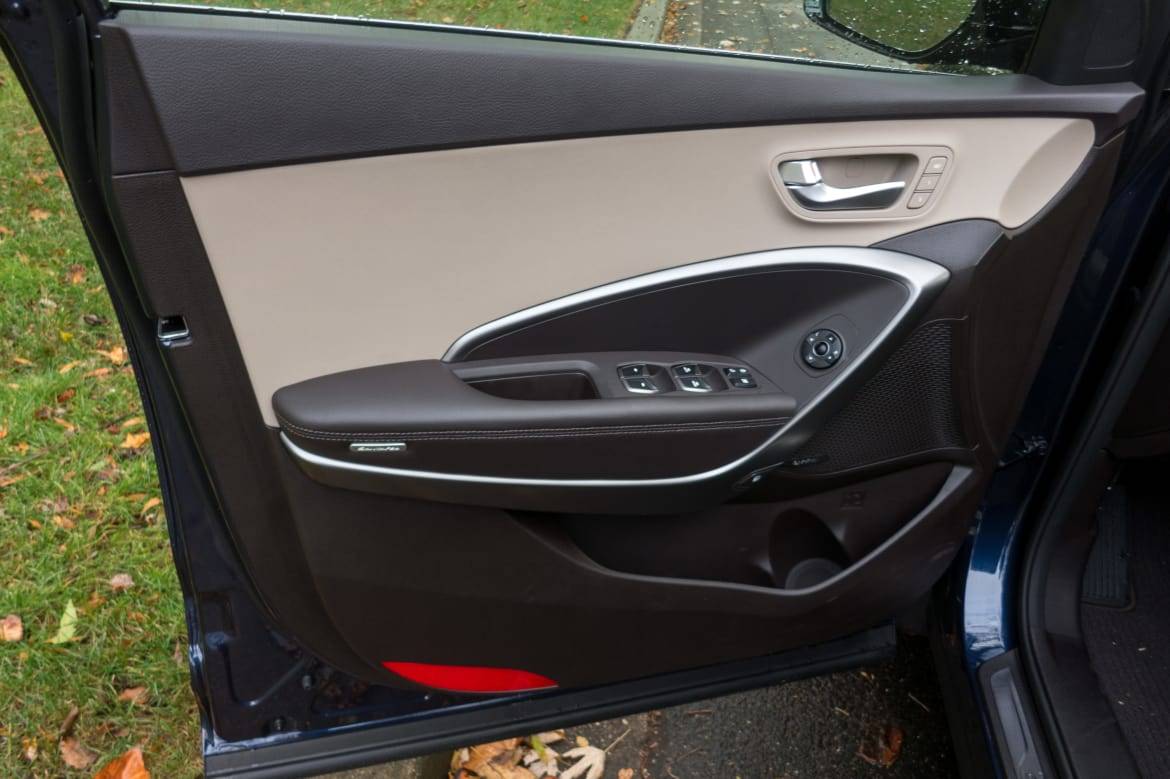 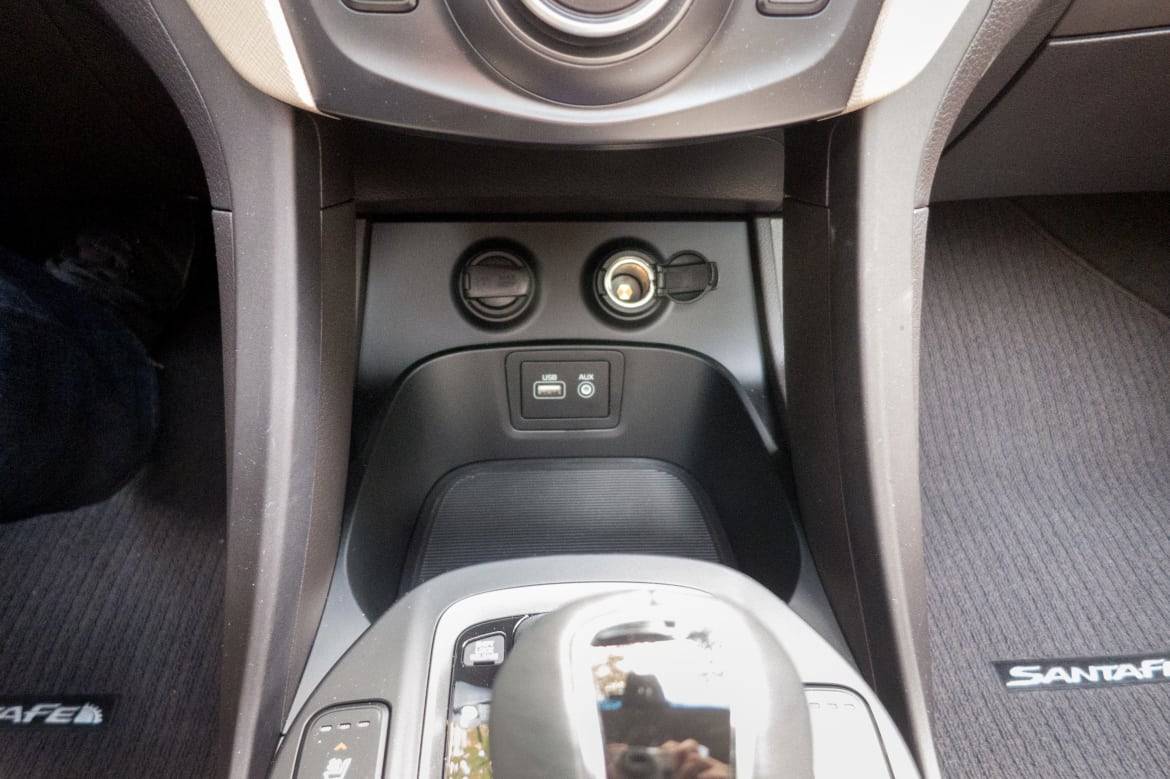 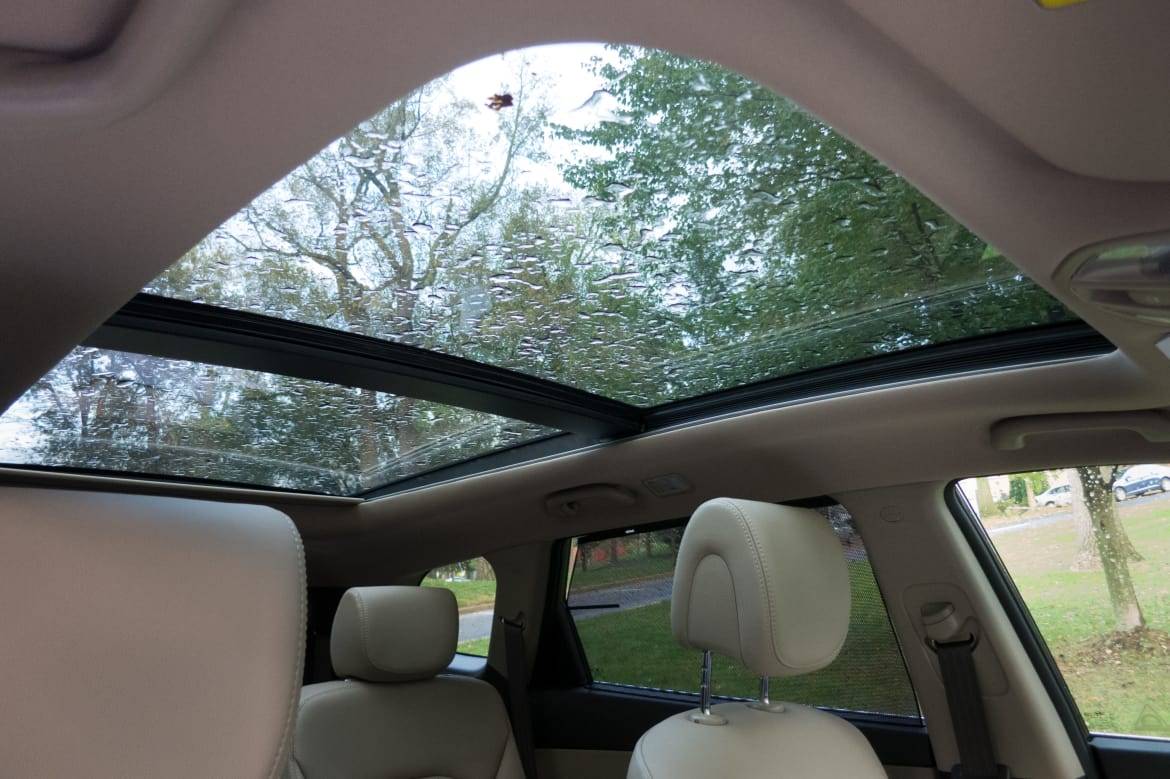 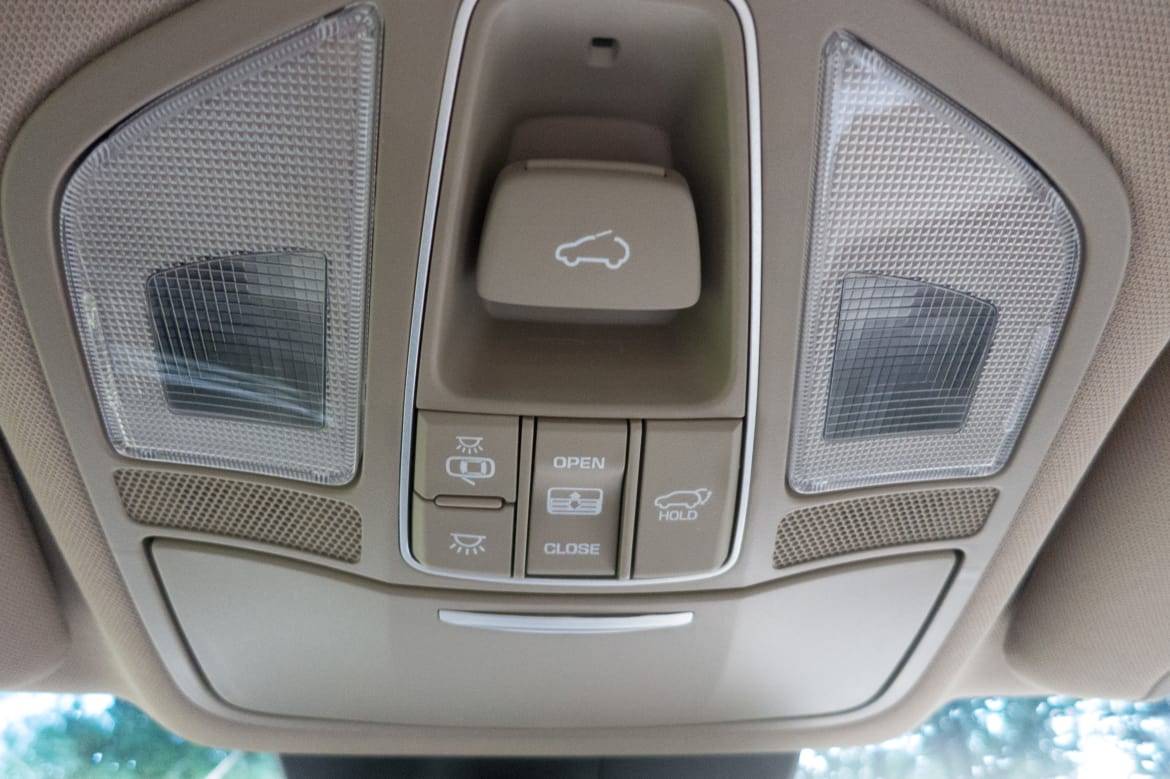 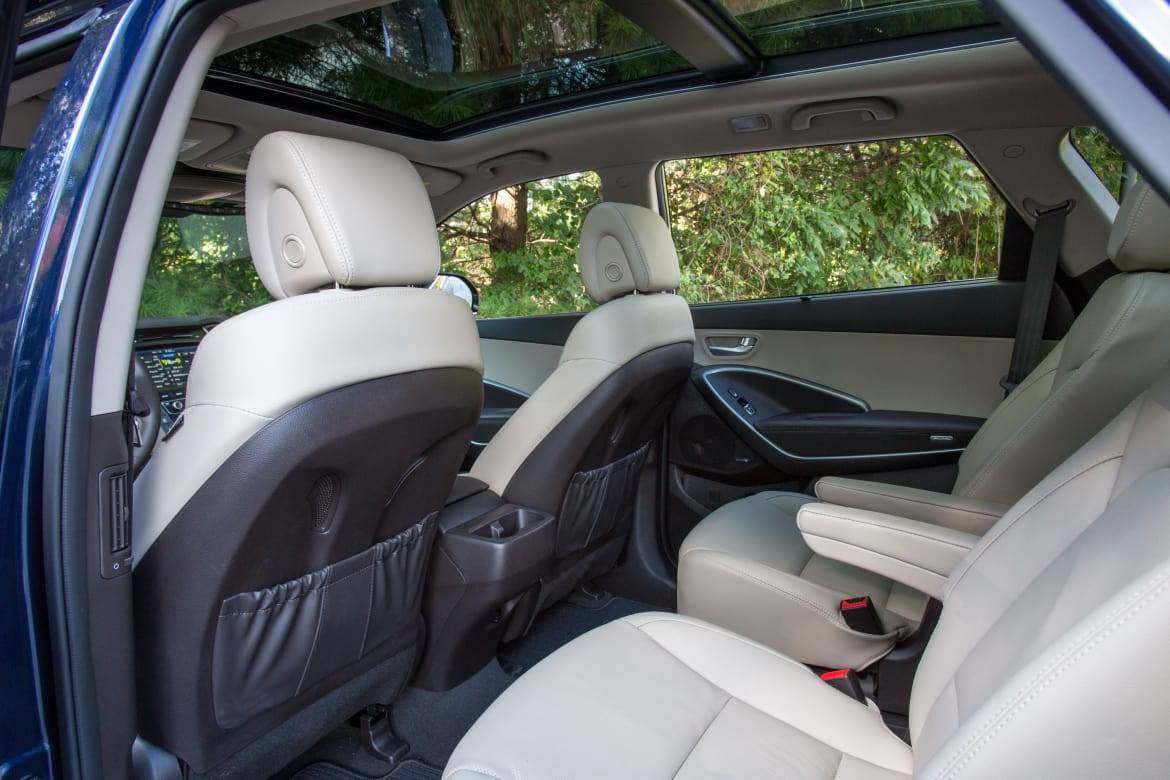 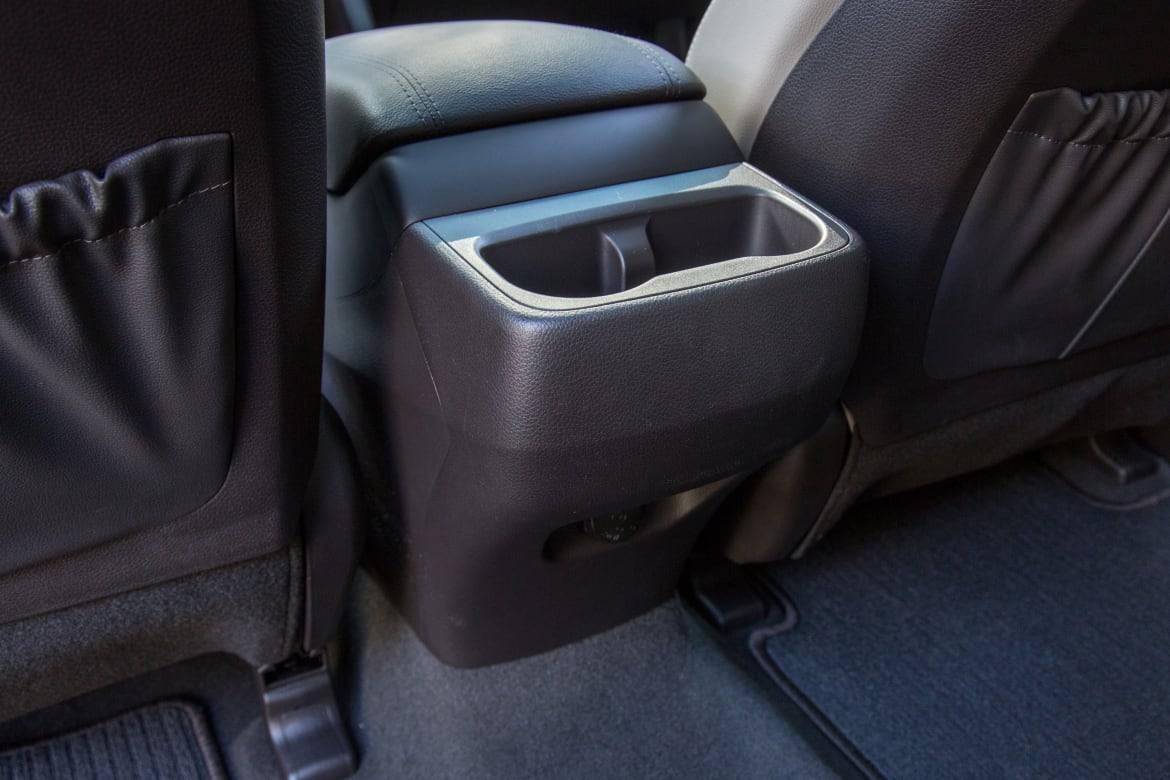 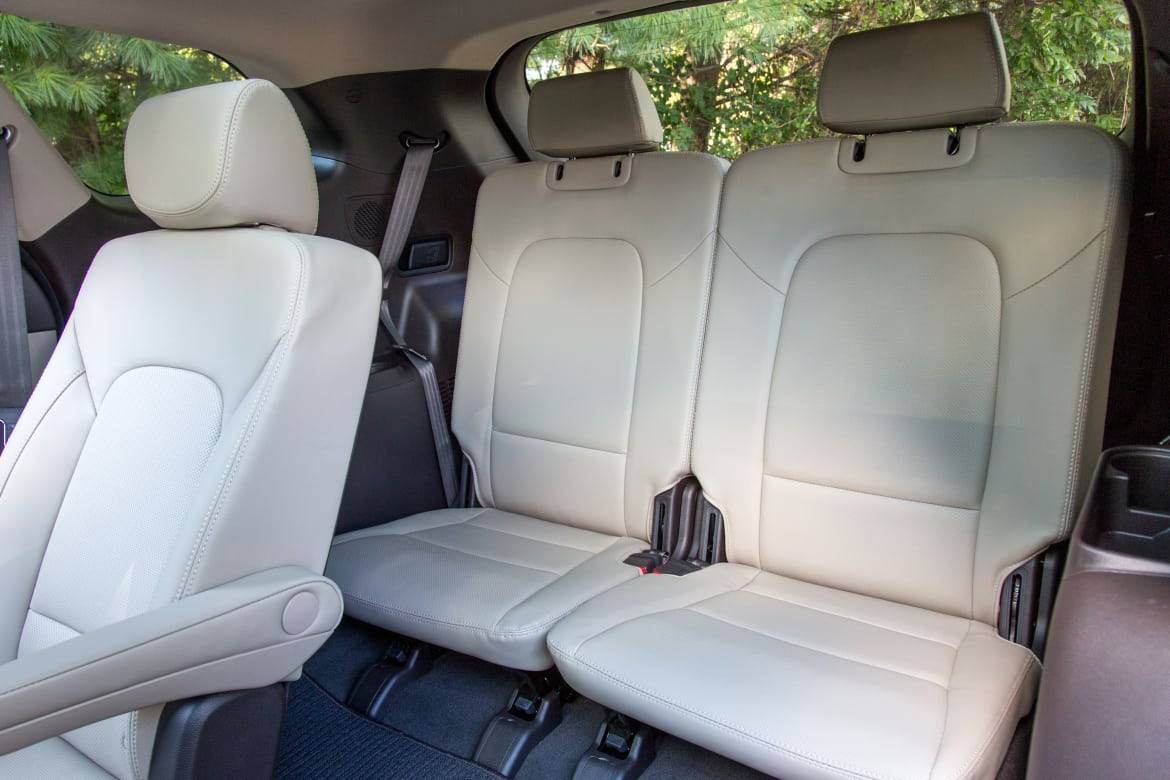 Hyundai’s Santa Fe three-row SUV, mildly redesigned for 2017, boasts safety upgrades that compare to those of newer competitors, but it no longer has the same edge on the field as when it rolled out at the 2012 Los Angeles Auto Show or later won Cars.com’s 2014 Three-Row SUV Challenge.

Thanks to upgrades for 2017, the Santa Fe competes evenly with the Honda Pilot and Toyota Highlander in terms of appeal to safety-conscious families. Compare the 2017 with these rivals here.

Four trims are offered: SE, Limited, SE Ultimate and Limited Ultimate, with seven- or six-seat configurations depending on trim (the Ultimate versions get second-row captain’s chairs). We tested a top-level, front-wheel-drive Santa Fe Limited Ultimate ($43,160 as-equipped) in a head-to-head comparison with seven similarly priced rivals in the 2016 Cars.com Three-Row SUV Challenge, as well as over a couple of hundred additional miles in city and suburban traffic.

Up front, the 2017 Hyundai Santa Fe has a new bumper, a bigger Hyundai grille, revised headlight pods and Elantra-like vertical LED daytime running lights. New taillights (LED on Limited trims) and dual exhaust outlets now grace the back end, and new 17-, 18- and 19-inch wheels are available. The changes are subtle, but the overall effect makes the SUV more premium. The sloping roof and tapered rear side windows that carry over from last year continue to contribute to a pleasing, sporty look — and to sacrifice third-row headroom and rear visibility.

Most of all, the Santa Fe is easy to drive, carlike and comfortable, but it’s not unsettled when driven hard. No one buys a three-row SUV expecting a sports car, but, for this class, the Santa Fe offers confidence-inspiring handling with restrained body motion and lean. Braking is firm and linear, and steering offers reasonable — though not outstanding — feedback.

The sole powertrain is the previous version’s 290-horsepower, 3.3-liter V-6 and six-speed automatic transmission, with front- or all-wheel drive. The setup gives the SUV plenty of torque scoot around town and adequate highway power for passing and merging, but the V-6 needs to be wound up to really deliver. The capable six-speed is less busy in highway cruising than some competitors — notably the Honda Pilot, which has nine speeds to juggle — and is far more pleasant and responsive than the continuously variable automatic transmission in the Nissan Pathfinder.

A new drive mode selector, with its button oddly located on the lower left of the dashboard, offers Normal, Sport and Eco modes that alter throttle and transmission response as well as steering feel. Eco imparted a lazy quality. Sport offered better steering, but its stronger throttle response made it harder to modulate the somewhat stiff accelerator pedal and drive smoothly at low speeds. Normal was, well, normal, likely the most pleasing compromise for most drivers and situations.

Ride quality is firm. It’s stable on uneven pavement and not unpleasant, but you feel the bumps. Smaller wheels, with their more compliant tire sidewalls, might offer more ride comfort (our test car had the 19-inchers). The tires may also have contributed to the higher level of highway road noise I heard in the Santa Fe than in several of its rivals when driven back-to-back.

The Hyundai Santa Fe’s fuel economy is comparable to its three-row V-6 rivals, which is to say it’s not their strength. The 2017 Santa Fe with front-wheel drive is EPA-rated 17/23/20 mpg city/highway/combined for Ultimate trims and 18/25/21 for lower trims. All-wheel drive drops combined ratings by 1 mpg.

Several of the Hyundai’s competitors also offer a regular four-cylinder or turbocharged-four option for mileage-conscious buyers, and the Highlander also offers a hybrid. The 2017 Santa Fe with front-wheel drive is EPA-rated 17/23/20 mpg city/highway/combined for Ultimate trims or 18/25/21 for the lower trims. All-wheel drive drops combined ratings by 1 mpg.

The interior design is little changed and is beginning to look a little dated. The overall design is pleasing, with a nice mix of colors and textures in our upscale test vehicle, but there’s also a mix of material quality. Though the wood trim is faux, it nonetheless has a very nice matte finish and grain. Some of the metal-finish plastic, however, just looked fake, and the leather lacks the softer texture found in some rivals, particularly the redesigned Mazda CX-9.

The seats are firm. They suited my 6-foot-2 frame and taste, but some other Cars.com editors found the padding too thin and the backs uncomfortably stiff.

Finding a just-so position in front was easy, however, thanks to a standard eight-way power driver’s seat with four-way power lumbar support. Families with multiple drivers will appreciate the available memory function for the seat and side mirrors. My decked-out Limited Ultimate’s front seats were ventilated as well as heated. The second row also had heaters, and the cherry on top was a heated steering wheel.

The Ultimate also features sliding and reclining captain’s chairs in the second row, while seven-seat models get a 40/20/40 second-row bench for three. The split-folding bench for two in the way back is best left to the kids, with its thin cushion and seating nearly on the floor. Even sitting so low, though, the sloping roof limits space for heads and the small side windows add to the cave-like feel. Legroom there is limited and requires negotiating with the folks in the second row. On the plus side, the third row has a child seat top tether anchor and offers occupants their own climate vents and controls, real cupholders and a USB port, plus 12-volt and 115-volt power outlets in the cargo area.

Those features contrast with the more Spartan second row, which has only climate vents and just one 12-volt power port that’s awkwardly hidden beneath an ugly console bulge that houses two rear cupholders.

The second-row seats tilt and slide forward for third-row access, and while the step-in height is lower than that of many rivals, the foot opening is small; kids may find it easier to scramble through the narrow aisle in models with the second-row captain’s chairs.

Overall visibility is limited by a high beltline, low roof and small rear windows, but our test car’s dramatic panoramic moonroof that extended to the third row alleviated any feeling of being closed in. It has a power shade, but I gave it little use except when parked in the sun. I even found the big glass canopy oddly satisfying in the rain.

In our Cars.com Car Seat Check, the Hyundai Santa Fe fit the car seats well, but the kid-unfriendly, floppy seat belt buckles in the second and third rows caused a downgrade in its booster seat score.

The Hyundai Santa Fe has standard Apple CarPlay and Android Auto for 2017. SE and Limited trims get a 7-inch touchscreen and six-speaker audio, while the SE Ultimate and Limited Ultimate get an 8-inch display with navigation and Infinity premium surround audio. The Infinity unit has crisp, clean sound, and its integrated Clari-Fi music restoration technology noticeably improved compressed music files playing from my phone.

If you like physical buttons and knobs, you won’t be disappointed with the Hyundai Santa Fe. It’s no slave to current all-touch fashion. While the layout is busy and could be simplified, you don’t have to wade through touchscreen menus or poke touch-sensitive controls to access common functions.

A thoughtful addition is a very useful open device tray ahead of the shifter that includes a USB connection, a pair of 12-volt outlets and an aux jack.

The Hyundai Santa Fe can seat six or seven, but they’ll need to travel light. With all seats in use, cargo space is a tight, vertical 13.5 cubic feet — far less than a Volkswagen Golf’s 22.8 cubic feet. The space is comparable to the Toyota Highlander but 3 cubic feet fewer than you’ll find behind the Honda Pilot’s third row. The 40.9 cubic feet of cargo space with the third row down and 80 cubic feet with the second row also folded are more competitive but still well less than the roomy Pilot offers. The split, folding third row and 40/20/40 bench or captain’s chairs in the second row offer cargo space and shape flexibility if all the seats aren’t needed.

Cargo access is eased by a hands-free power liftgate — optional on the base model and standard on other trims — that operates by simply pausing behind the SUV with the key fob in your pocket. It doesn’t force you, as do some rivals, to awkwardly balance on one foot and wave the other while balancing a load on each arm.

Hyundai made some structural and seat belt changes that erased a black mark on its crash-test scores, turning a marginal rating in the Insurance Institute for Highway Safety’s small overlap front test into a top score of good for 2017, matching its scores of good in the institute’s other crashworthiness tests. Those scores, plus a top score of superior for its newly available front crash prevention system with automatic emergency braking, qualified the 2017 Santa Fe to be an IIHS Top Safety Pick Plus, matching the designations earned by the Pilot and Highlander. See the 2017 Hyundai Santa Fe’s IIHS report card here.

To get that level of safety tech, however, you must first opt for one of the top two trims, then spend $2,100 for a Tech Package that includes those safety features, plus adaptive cruise control with stop-start, lane departure warning and high-intensity-discharge adaptive headlights. Blind spot warning and rear cross-traffic alert are optional on the base model and standard on the rest.

A backup camera is also standard, but the top two trims get a new 360-degree camera system that offers multiple views to the front, back and sides with great image clarity.

Hyundai remains a value brand, and the Santa Fe offers a ton of features for the price at each trim level. The loaded Ultimate Limited we drove had a rich stew of safety features, technology and luxury touches that could shame a fancier brand. Even going all-in on the top trim level, including all-wheel drive for $1,750, leaves a sticker that’s still about $850 shy of $45,000. And its warranty leaves rivals in the value dust: five years/60,000 miles of bumper-to-bumper coverage and 10 years/100,000 miles on the powertrain.

Long-time competitors, however, have upped their game. For less than $45,000, you can also get, for example, a comparable Pilot Touring with a roomy interior and a minivan’s worth of family touches. The 2017 Pilot also offers a full suite of safety tech on all but the base trim. The 2017 Toyota Highlander one-ups that with similar advanced safety tech standard across the line. Both these rivals offer rear-seat entertainment systems; Hyundai does not. You can argue the worth of such costly systems if your kids are old enough to bring their own devices, but many families with young children will want it.

The Hyundai Santa Fe also has less-familiar competition nipping at its heels. From the back of the pack, Mazda’s redesigned 2016 CX-9 has vaulted ahead with sporty driving dynamics, high style and a top-trim interior that seems more like an Audi than a Hyundai. A trimmer, lighter 2017 GMC Acadia is now aimed at the heart of the mainstream three-row SUV market in size and competitive pricing.

Even the Hyundai Santa Fe’s corporate three-row cousin, the Kia Sorento, was redesigned for 2016 and is now a stiffer rival, topping out with comparable luxury for the price and the same long warranty. It also undercuts the Hyundai at the lower rungs with a four-cylinder, base L model that starts at $26,295 (with destination), plus a next-level LX trim with a four-cylinder or V-6 that are both priced lower than the entry-level Santa Fe SE‘s $31,695 (with destination). Driving them back-to-back shows that Kia’s engineers have managed to refine the shared platform for a bit better noise and ride.

The Hyundai Santa Fe is a solid value in a satisfying, easy-to-drive package, but fresher competitors are challenging its edge as it awaits a more extensive update.