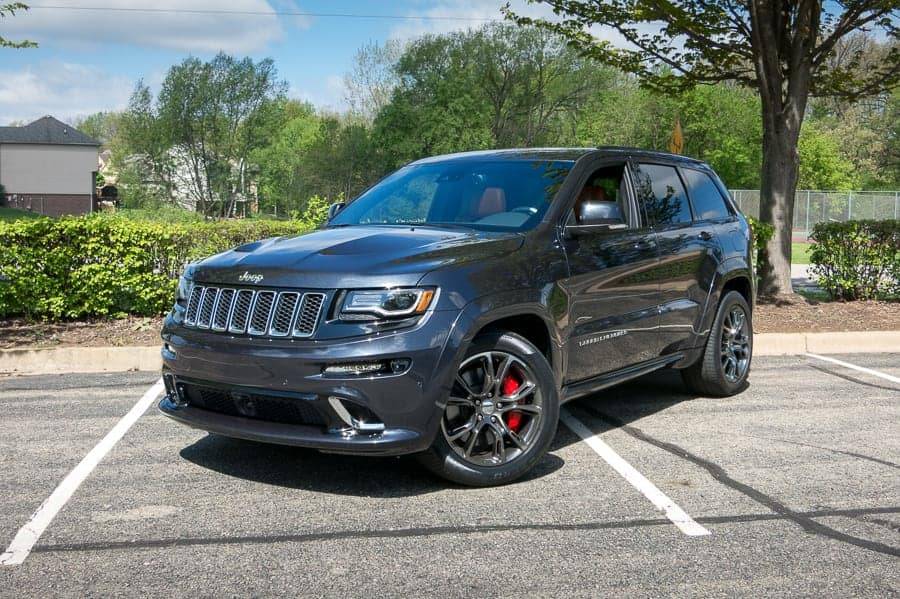 Editor’s note: This review for the 2016 Jeep Grand Cherokee SRT was written in August 2016, but little has changed for 2017. To see what’s new, click here, or to see a side-by-side comparison of the the two model years, click here.

Jeep’s Grand Cherokee has been around a few years in its current form and is due for an update in the not-too-distant future. The current version won our $38,000 Midsize SUV Challenge three years ago and not much has changed since aside from the addition of an EcoDiesel model and a fancy, range-topping Summit model.

I drove the fire-breathing SRT trim, complete with a massive 6.4-liter Hemi V-8, 20-inch black chrome wheels and an electronic sport suspension with a Track mode. There was even a special button on the console labeled “Launch.” It’s about as far from being trail-rated as you can get, making it an awkward idea for the Jeep brand — but we’re not going to complain about brand purity when 475 hp is rumbling out the back through massive quad pipes.

For 2016, the Grand Cherokee SRT gets a couple of new colors, a lighter aluminum suspension, a new instrument cluster, a revised Performance Pages app and a new set of selectable drive modes. Compare it with the 2015 model here. I took a spin in the new 2016 Grand Cherokee SRT to see if the latest version is as much fun as the first one I drove on the track many years ago.

It’s hard to make what is essentially an enormous box look sexy. You can’t play much with shapes or sheet metal, but Jeep’s stylists have done a decent job of turning the rugged, sleek, functional Grand Cherokee into a passable approximation of a muscle car.

The flared fenders, scoops on the bumper, bulges in the hood and dark glossy wheels with thin rubber all suggest this is not a rock-crawling Jeep but something far more sinister. LED running lamps and taillights are standard, as are bi-xenon high-intensity-discharge headlights with headlamp washers. Dual exhaust advertises the power under the hood and completes the whole package. If there’s any complaint, it’s that the changes are just a little too subtle: Despite the flared fenders, it looks a lot like other top-trim Grand Cherokees.

Driving the SRT reveals some impressive engineering accomplishments. It’s a beast of a machine, no doubt, but it never feels harsh, unrefined or coarse in its moves. Power comes from a 6.4-liter Hemi V-8 pumping out 475 hp, channeled to all four wheels through an eight-speed automatic transmission.

The engine growls to life at the push of a button and delivers both an amazing roar and formidable forward momentum at the push of the accelerator, yet it’s not overly loud or intrusive. In fact, I wouldn’t have minded if it had been a little bit louder than it was. Perhaps the upcoming 2017 Trackhawk version, with the supercharged Hellcat V-8, will rectify that situation.

The throttle can be a bit jumpy, so leaving it in Eco mode around town isn’t a bad idea; it softens power delivery to a more usable level. That means you won’t alarm your passengers when you put your foot into it accelerating from a stoplight at what you had expected would be a gentler pace.

The Grand Cherokee SRT’s handling is impressive, as well, with excellent feel and a tight turning ratio, but there’s really no disguising this truck’s mass. It feels a bit top-heavy and rolls aplenty in spirited driving, but you can firm everything up thanks to Jeep’s drive modes. Just twist the selector on the center console to the setting that best describes your current activity: Auto, Sport, Track, Snow or Tow. There’s also a Custom mode that allows you to individually tailor the all-wheel-drive system, transmission shifting behavior, paddle shifter operation, stability control intrusion, suspension firmness and steering assist to whatever combination suits your fancy.

The Grand Cherokee also has an Eco mode button on the center console that softens responses to improve fuel economy. Leaving the Jeep in Auto is a good idea, but popping it into Sport now and then to disable cylinder deactivation (and the odd, dissonant tone it brings to the engine note) and quicken its response can be a lot of fun. Track mode is truly best for the track, as it stiffens the ride to an uncomfortable degree for around-town use.

Resting next to the selector knob is a Launch button that has a drag-strip Christmas tree graphic. Pushing it activates the launch control setting, so when you put your left foot on the brake and floor the accelerator with your right, the Jeep will hold in place and rev the engine to a predetermined level. Then just slip your left foot off the brake and off you go, on a maximum acceleration run. Jeep says the Grand Cherokee SRT goes from zero to 60 mph in 4.8 seconds, but according to the onboard Performance Pages app that measures acceleration times, I beat that by 0.3 seconds.

Hauling all the Grand Cherokee SRT’s 5,104 pounds down to a stop is an easy job for the big Brembo brakes. If you want even more stopping power, opt for the two-piece high-performance brake package.

We can talk about fuel economy, I suppose, but in these trucks it’s an afterthought at best. The Grand Cherokee SRT is EPA-rated 13/19/15 mpg city/highway/combined and my week of testing saw the truck return about 15.3 mpg in mixed use. That’s OK, though, as the competition isn’t any better. The Mercedes-AMG GLE63 is rated 13/17/15 mpg, while the BMW X5 M is rated 14/19/16 mpg. The lighter Porsche Cayenne Turbo comes in at 14/21/17 mpg — a comparably impressive highway number. All these trucks’ manufacturers recommend premium gasoline.

We’ve been fans of the Grand Cherokee’s interior since its last update; we rated its luxurious feel as one of its best features in our 2013 comparison test.

There’s a good reason for this: According to Jeep, the Grand Cherokee often shares garage space with luxury-brand vehicles, as many shoppers consider it a premium vehicle. The SRT trim amps things up to even more luxurious standards: My test vehicle came with an optional Laguna Leather Package, which uses beautiful premium cowhide on the seats, doors, dash and other surfaces that occupants touch.

The seats themselves are big, heavily bolstered and very comfortable. They are rather bulky, however, and eat into backseat legroom and knee room a bit. The front seats are heated and ventilated, and the rear outboard seats are heated. Outward visibility is only fair; it’s compromised somewhat by thick A-pillars that can obscure the road ahead when negotiating fast, sweeping corners. Things are plenty airy inside the cabin, though, if you add an optional dual-pane, panoramic moonroof, which lets light into both rows of seats.

The SRT’s new gauge cluster has rearranged things like the tachometer and speedometer, but it’s still one of the most highly configurable gauge clusters in the business. It looks pretty slick.

There’s also an updated version of Fiat Chrysler Automobile’s Uconnect touch-screen, which works even better than before. It remains one of the easiest multimedia systems to use, with a clean design and quick functionality, and now it’s configurable, as well. Using a drag-and-drop icon tray, you can rearrange it for faster access to things you use more frequently.

The rest of the buttons and switches inside the Grand Cherokee are high-quality, logically placed and easy to find on the fly. The updated Performance Pages app is also a lot of fun, providing all kinds of timers, supplementary gauges, meters and adjustable controls for people looking to use their SRT for more than just getting groceries.

The Grand Cherokee has never been the biggest midsize SUV, but this latest version scores midpack in terms of cargo room. There’s adequate room in the cargo area: 36.3 cubic feet, expandable to 68.3 cubic feet with the backseat folded. In contrast, the Mercedes-Benz GLE has 38.2/80.3 cubic feet, while the BMW X5 offers up 35.8/76.7 cubic feet. The Porsche Cayenne is a bit smaller, with only 23.7/60.2 cubic feet, due in part to a swoopy roofline over the cargo area.

The SRT has not been crash-tested by the National Highway Traffic Safety Administration, but the basic 2016 Grand Cherokee has. It was rated five stars in front- and side-impact testing but only four stars in rollover protection. Its overall rating is five out of five stars. The Grand Cherokee scored a rating of good in the Insurance Institute for Highway Safety’s various crash tests, with one exception: It was rated marginal in the small overlap front test. See all its safety test results here.

The latest Grand Cherokee offers most of the top electronic safety systems you could possibly need. The SRT includes adaptive cruise control, forward collision warning with automatic emergency braking, a backup camera, blind spot and cross-traffic alerts, and front and rear parking sensors — all standard. Surprisingly, there is no lane departure warning or lane departure prevention system offered, though there is a trailer sway control feature as part of the stability control system. See all the Grand Cherokee SRT’s standard safety features here.

Compared with competing high-performance SUVs, the Grand Cherokee SRT is a relative bargain. It starts at just $66,690, including destination, and comes fully equipped with just about everything that’s optional in lower-trim Grand Cherokees. You can fancy it up even more by adding the Laguna Leather Package, a rear-seat entertainment system, a trailer tow group, a high-performance Harman Kardon 19-speaker audio system, a dual-pane panoramic moonroof and 20-inch black chrome wheels. My test car had all of them, pushing its sticker price to $76,260.  Tick every option box by adding special paint, a performance brake package, an SRT Night appearance package and more, and you can top out just north of $81,000.

Competitors are more expensive and only slightly more capable than the SRT. The Mercedes-AMG GLE63 (formerly known as the ML63) starts at $100,875. That’s nearly 50 percent more than the Grand Cherokee SRT, but you don’t get much more power or capability for the extra cash. You do get standard lane departure warning in the Mercedes, but the other safety features standard on the SRT — including adaptive cruise control, blind spot warning, and cross-traffic alert — are optional on the GLE63.

The Grand Cherokee SRT also represents a much better performance bargain than the BMW X5 M, which starts at $99,795 and, like the Mercedes, doesn’t include much in the way of standard electronic safety features.

Shop cars for sale near you Research cars Compare vehicles
10 Biggest News Stories of the Week: Toyota Tundra Crosses Corolla Cross
October 20, 2021
Which SUVs, Minivans and Sedans Have the Most Cargo Space?
October 20, 2021
Chevrolet Trailblazer: Which Should You Buy, 2021 or 2022?
October 20, 2021
See all latest news