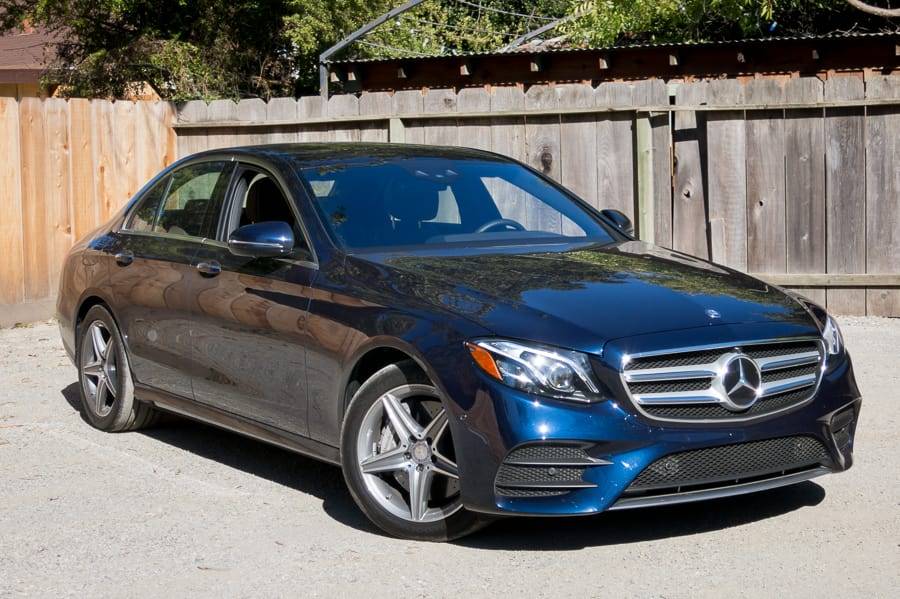 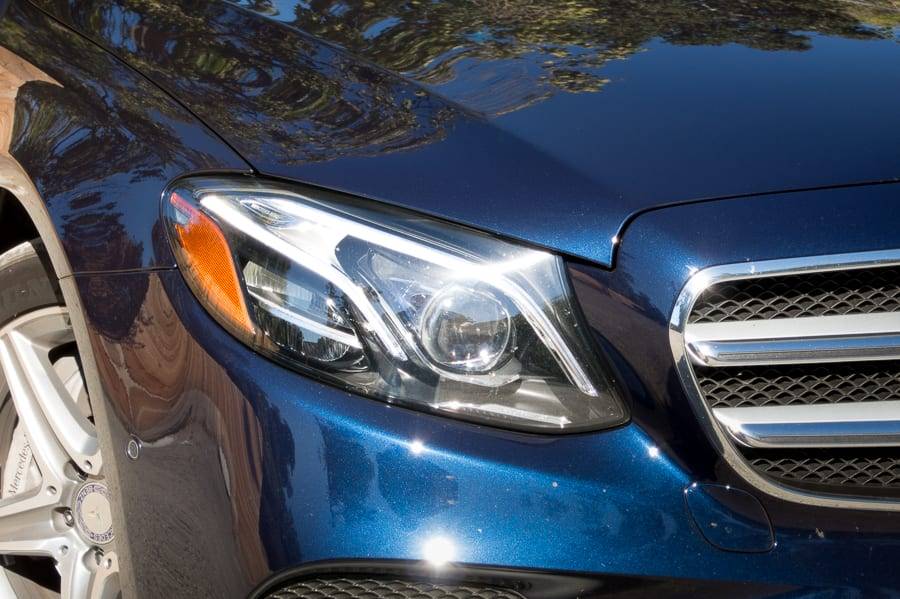 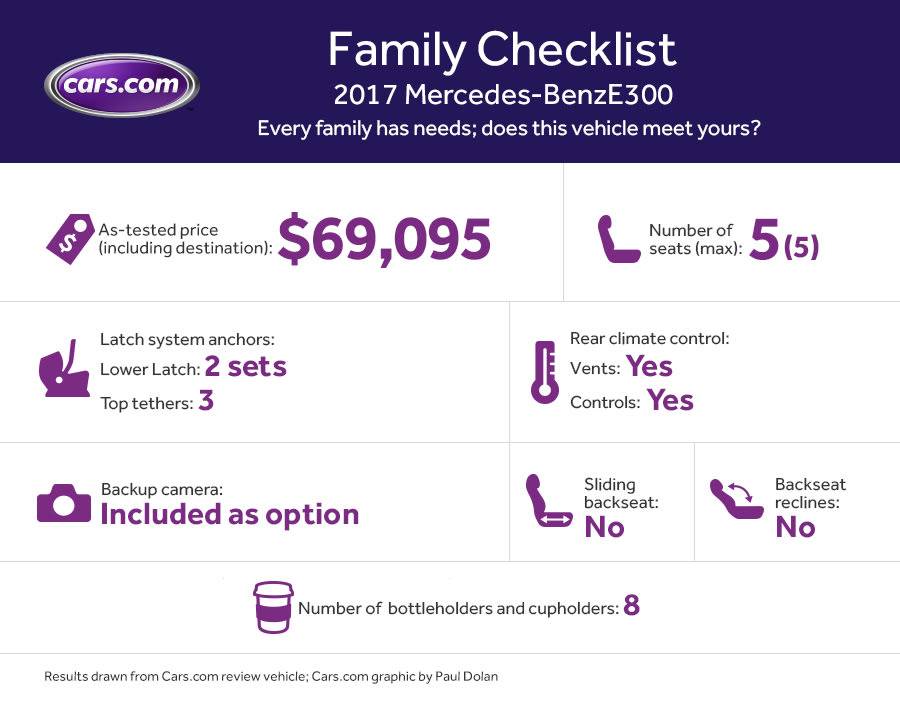 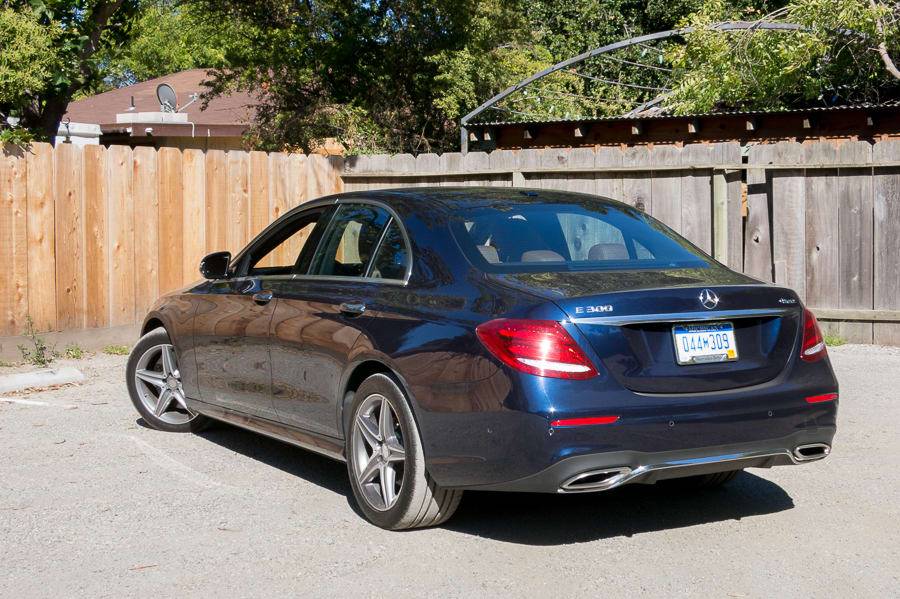 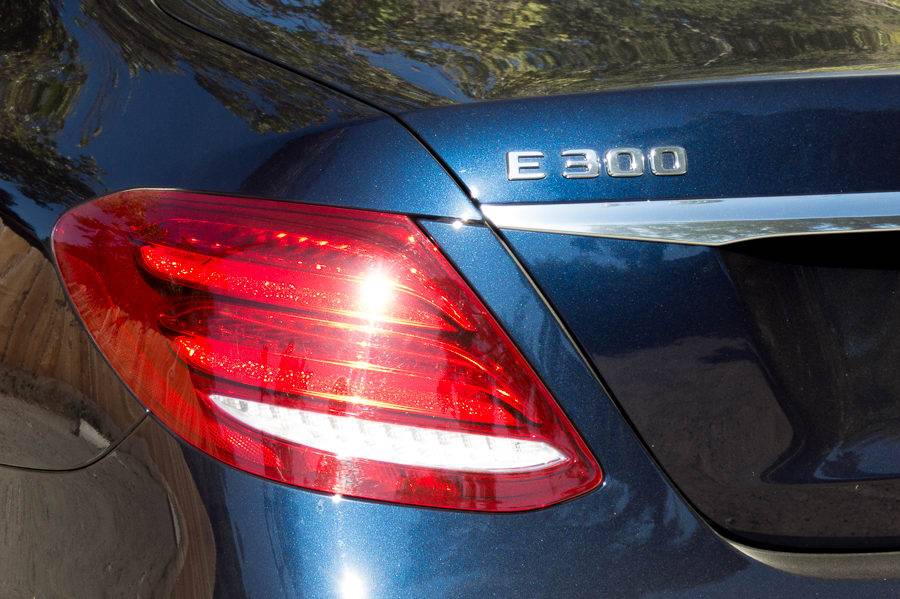 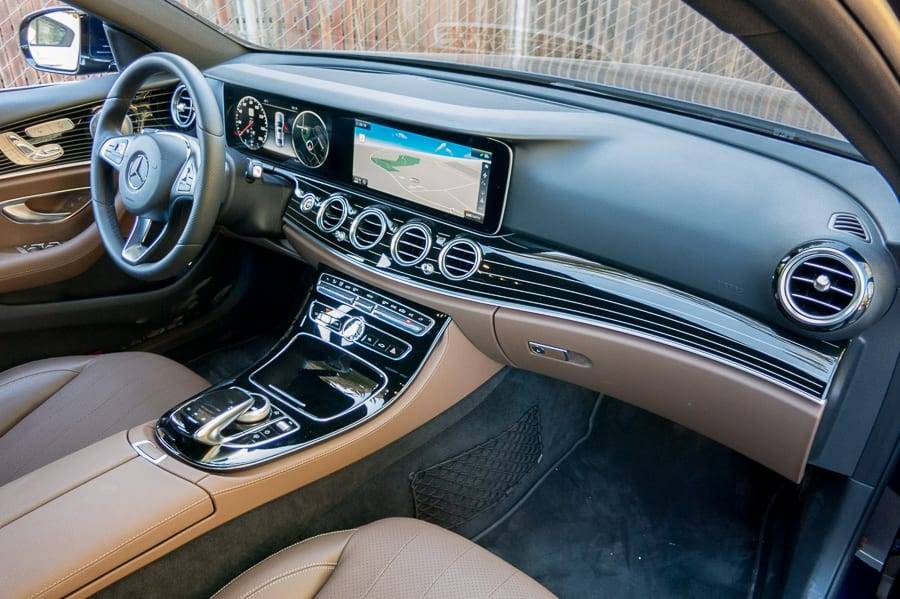 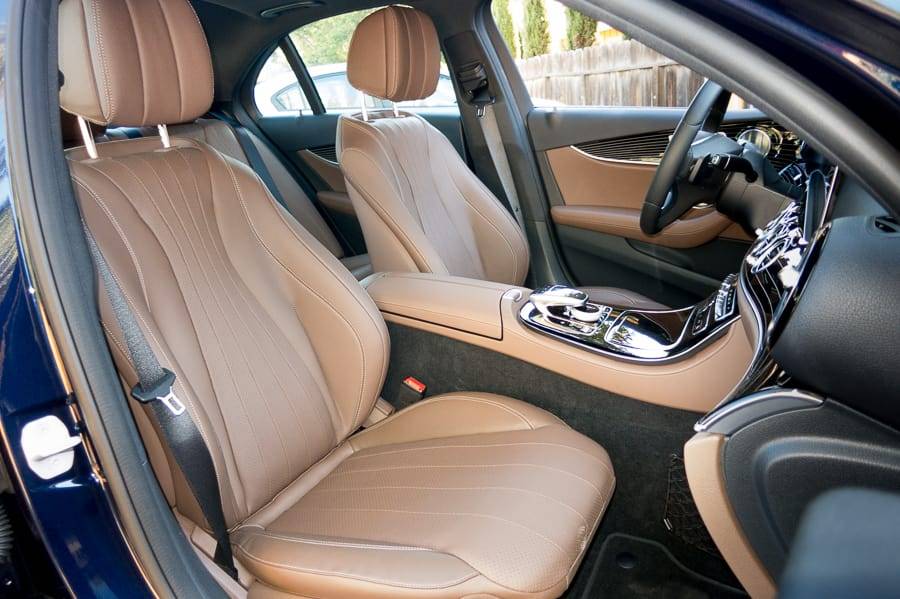 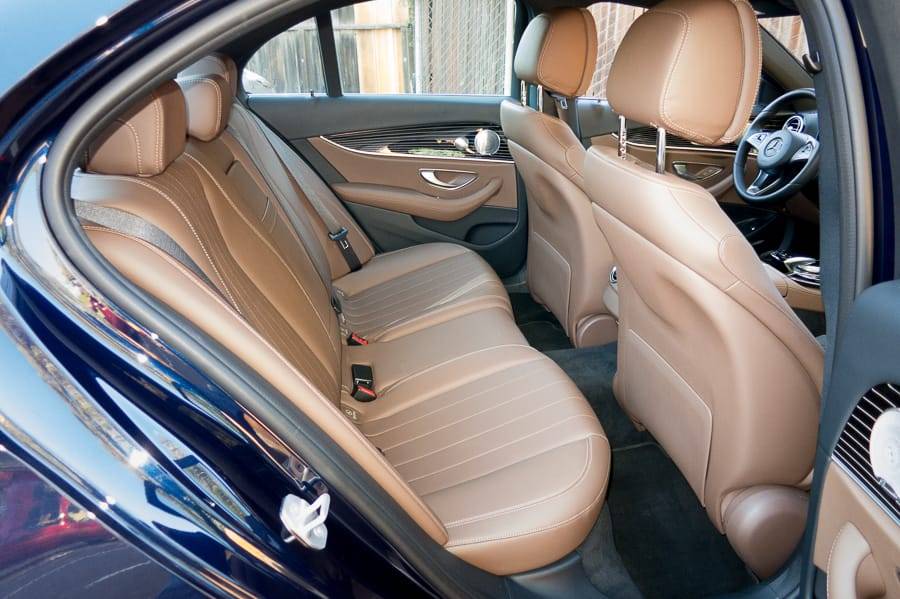 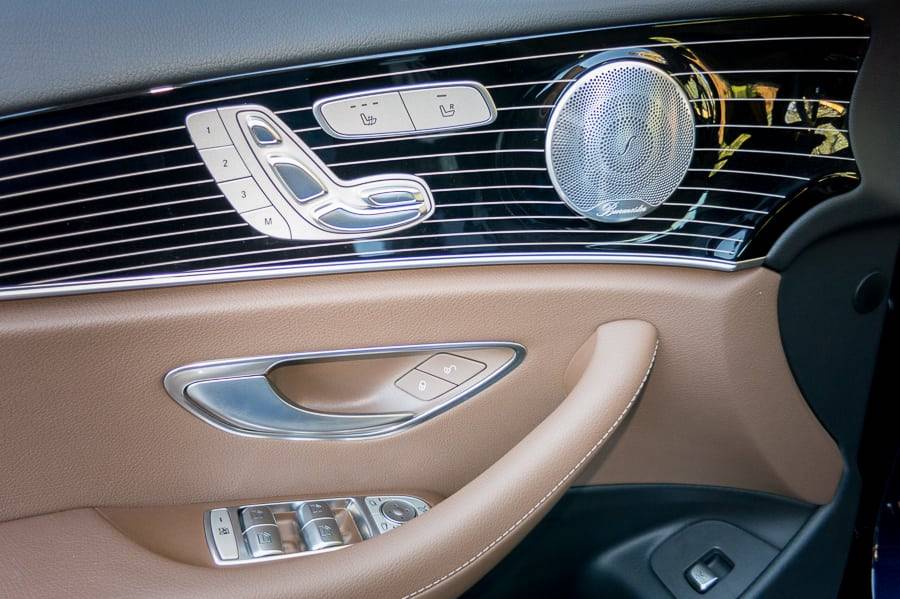 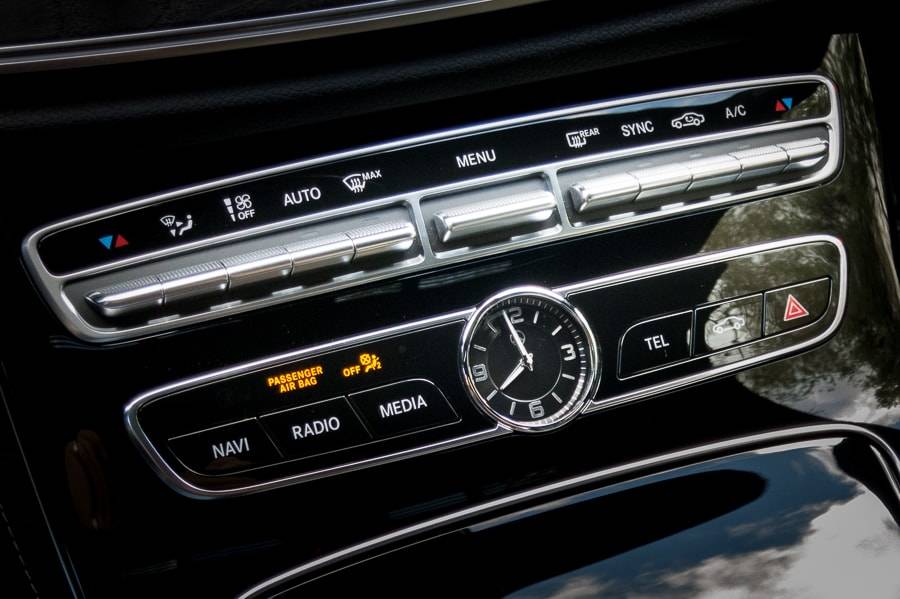 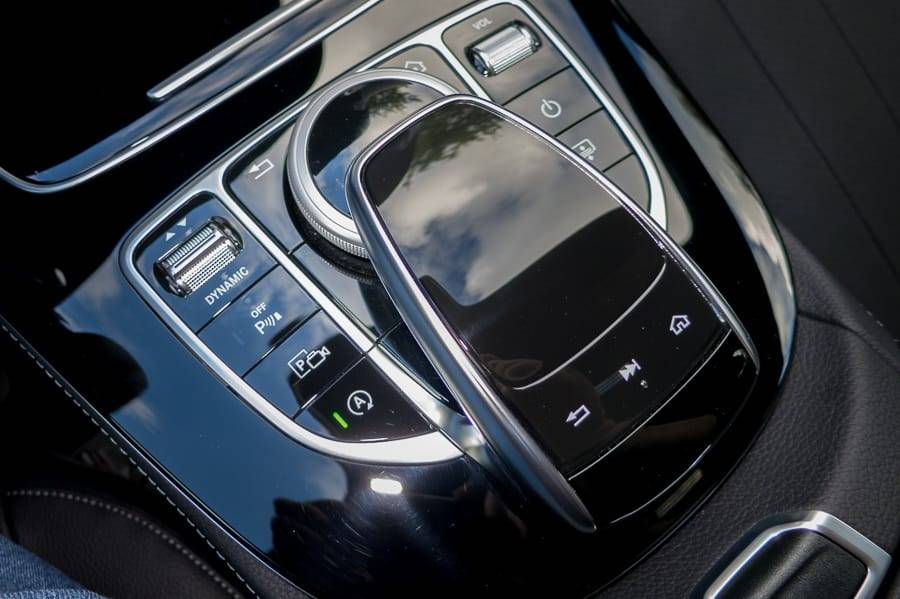 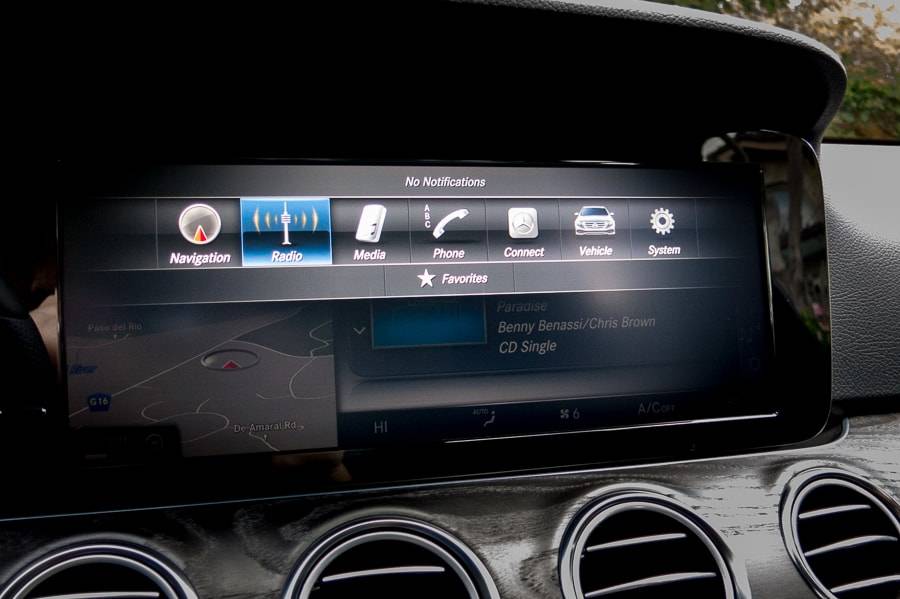 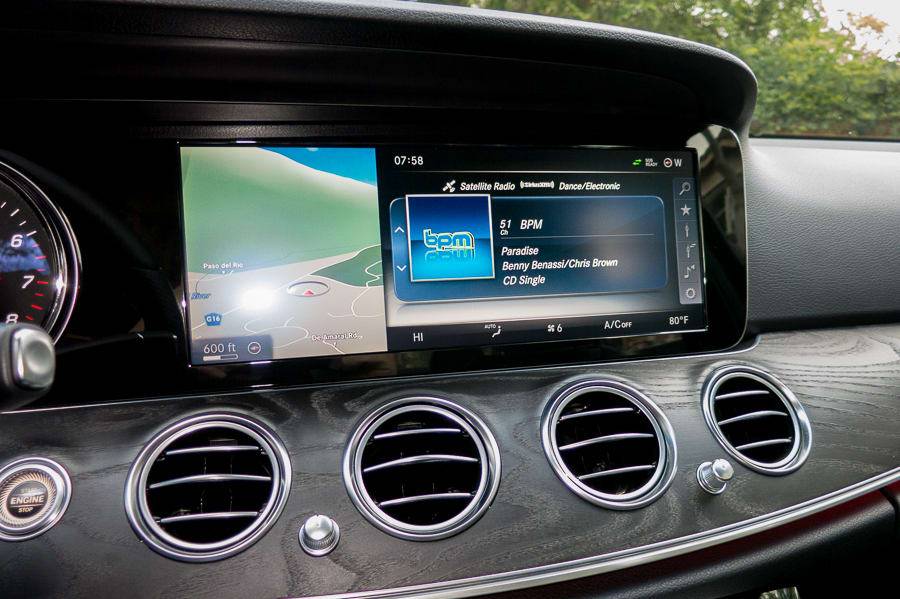 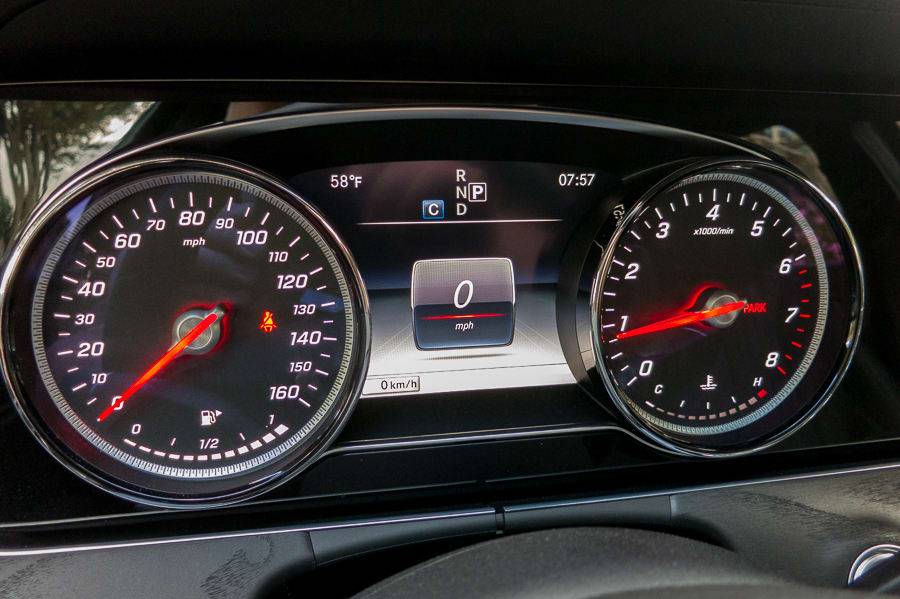 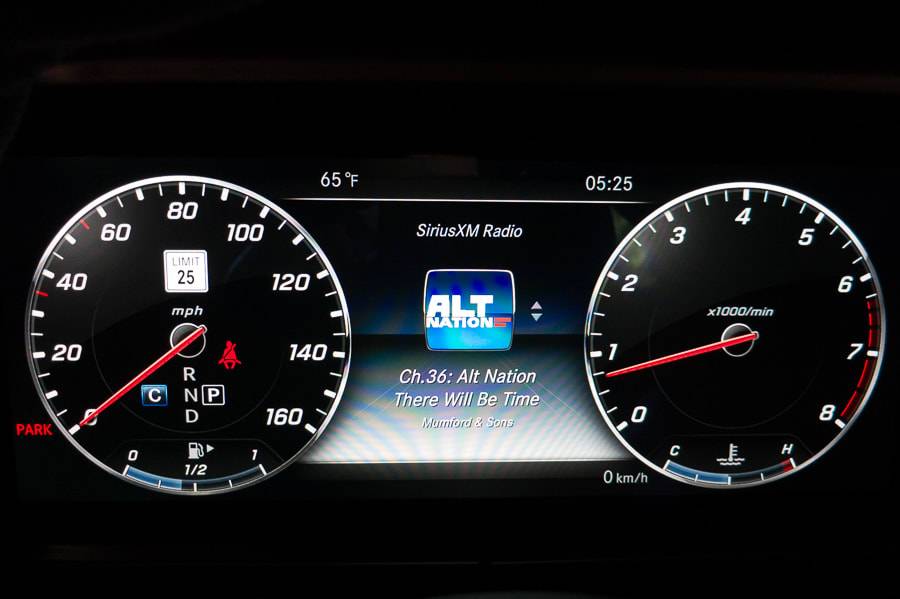 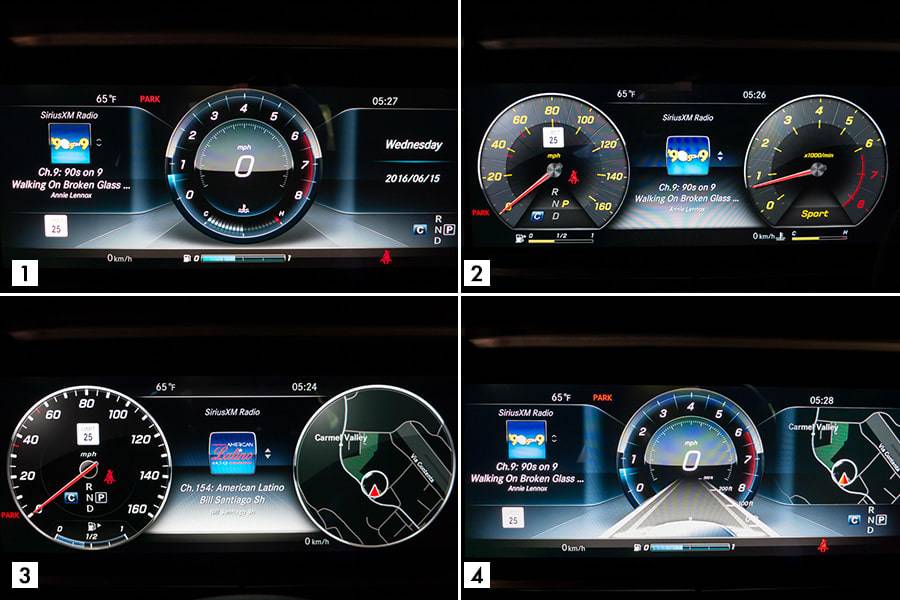 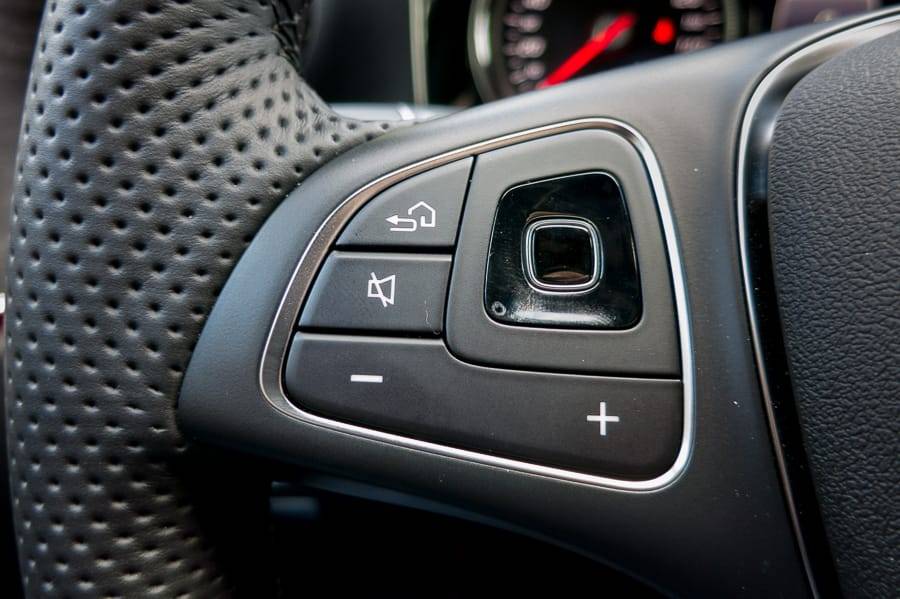 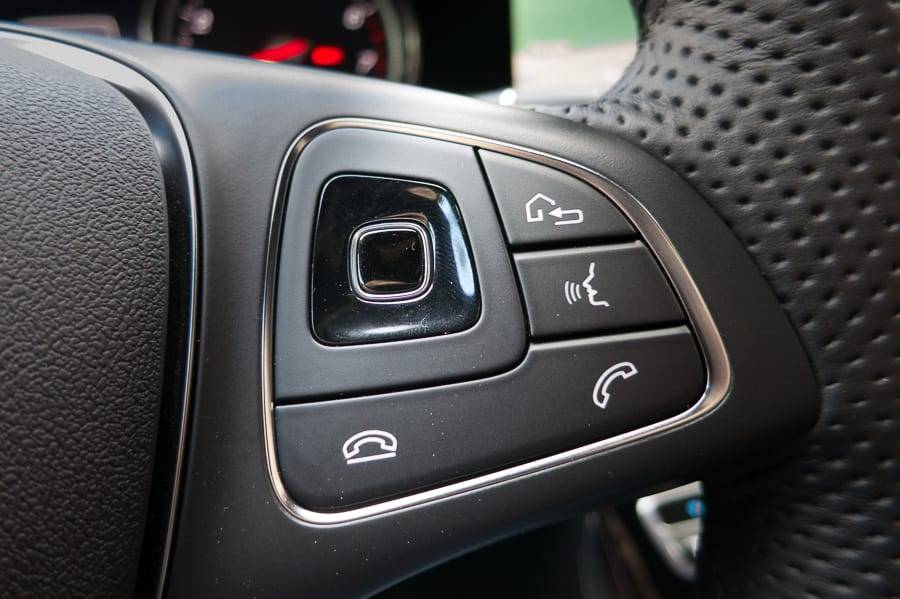 The Mercedes-Benz E-Class sedan is the workhorse of the Mercedes-Benz luxury showroom. It serves as a personal luxury car, executive transport, taxi cab or high-powered performance machine, depending on where in the world you happen to be. I recently drove a 10th-generation E-Class, an E300, which features a host of new safety systems, a new powertrain, new styling inside and out, and a new level of autonomous driving technology that’s sure to open some eyes.

From the outside, the new Mercedes-Benz E-Class doesn’t really stand out. It’s certainly a handsome design, but it looks just like the S-Class, C-Class, CLA-Class and GLC-Class. All Mercedes-Benz products, especially the sedans, are starting to look the same, just in varying sizes — much like Audi. If you like the way one product looks, you’re probably going to like them all.

There are a few variations for the E-Class, such as the light pattern of the headlights and the continuation of a three-pointed-star hood ornament for the Luxury version or the laid-down badge for the Sport version. A sweeping character line extends from the front fenders to the rear ones, reminiscent of the original CLS sedan. The look is perhaps weakest from the rear three-quarters, where the rounded rump and generic taillights impart no presence or distinctiveness to the E-Class. It’s easy to lose it in a parking lot full of cars.

Mercedes-Benz has provided a driving experience to match the car’s luxurious accommodations. Fire up the E300’s turbocharged, 2.0-liter inline four-cylinder engine and you’ll be forgiven if you’re a little confused — it doesn’t sound like a four-cylinder at all. Listening to the pleasant burble of a powerful V-6 coming through the dashboard firewall –it only got better as I accelerated away — I wondered exactly what was going on. Turns out, Mercedes-Benz pipes engine sound into the cabin via the audio system (as do a growing number of automakers), otherwise you’d never hear the engine. The sound insulation in the E-Class is so good, it’s astonishingly silent at highway speeds. Mercedes-Benz insists it has merely piped in “enhanced” recorded engine sound, but I’m still not convinced it’s the sound from the 2.0-liter engine.

That engine is the same one you’ll find in the C-Class, making 241 horsepower and 273 pounds-feet of torque. Its turbocharged, direct-injected nature allows all that torque to be produced much lower in the rev band than in the outgoing, standard V-6 engine, making the new E300 feel quick, powerful and substantial. It may be a big sedan with a turbo-four, but it gives up nothing in drivability with that smaller engine.

The nine-speed automatic transmission is fantastic, perfectly matched to the engine, and performs shifts so smoothly and quietly it’s difficult to determine when it happens. Put the car into Sport or Sport Plus mode, though, and it becomes more apparent, with more aggressive shift patterns and a computer that holds lower gears much longer than it would in the Eco or Comfort driving modes.

The standard suspension is adaptive and comes in two flavors: Luxury and Sport, with the Sport model being lowered slightly. You can also opt for an Airmatic air-spring suspension, which brings more adaptability and a ride that shows demonstrable differences between the most- and least-aggressive sport settings (unlike with the standard suspension).

Steering feel is on the softer side, with its heavily boosted nature adding to the feeling of isolation that defines much of the rest of the E300 driving experience. But again, switching things into Sport or Sport Plus mode enables the E300 to dance through hills and canyons with aplomb. It proves to be a surprisingly good sport sedan, but with a base level of luxury and coddling that never quite goes away. It makes us really look forward to the upcoming E43 AMG and E63 AMG versions, with their hotter twin-turbo powertrains and more aggressive suspension tuning.

Compared with its competition, the E300 is smoother, quieter and surprisingly quick for what’s under the hood. A turbocharged, 2.0-liter four-cylinder engine is ubiquitous as a base engine in this class: the BMW 528i, Audi A6, Lexus GS and Cadillac CTS all have one. In terms of fuel economy, the E300 holds its own. It’s EPA-rated 22/30/25 mpg city/highway/combined for rear-wheel-drive versions and 22/29/24 mpg for 4Matic all-wheel-drive models. The rear-wheel-drive BMW 528i is rated 23/34/27 mpg — considerably better than the Benz despite being down one gear in its transmission. The Audi A6 does even better, at 24/35/28 mpg with front-wheel drive, while the Lexus GS 200t bests the E300, as well, with a rating of 22/33/26 mpg.

Mercedes has crafted another knockout interior in the E300, with fresh designs, high-quality materials and cutting-edge technology. The seats feel as though they’ve been positioned lower than you find in most cars these days; my legs were stretched out in front of me unusually straight, with a low hip point. Width is a bit compromised due to the wide center console, but this driving position is fairly common among Mercedes’ sedans and coupes. The seats are supportive and comfortable, with Mercedes’ active multicontour and massaging functions available as options — but even at prices well north of $55,000, you still don’t get an actual leather seats.

Despite a standard moonroof, headroom is plentiful up front and in back. What’s not plentiful in back is legroom, which is surprisingly scant: At 6 feet tall, I was unable to sit comfortably “behind myself” when I had adjusted the front seat to where I’d normally sit to drive. This is surprising for a vehicle of this size.

The most striking design elements of the new Mercedes E-class’ interior are its standard 12.3-inch central display and optional 12.3-inch gauge cluster screen. I drove two versions of the E300 — one without the fancy electronic gauges and one with the Premium 3 Package, which included the second digital screen.

The base car’s fixed gauges are attractive and flank a 7-inch screen that has all the traditional information Mercedes-Benz displays there, from trip info (such as fuel consumption) to entertainment and navigation info. The digital display is more striking, however, with three configurable themes: Classic, Sport and Progressive. Classic looks like the traditional gauges, while Sport gives them yellow numerals and hash marks. The gauges can be further customized to display various things, such as navigation directions instead of the tachometer. Progressive is the most unusual theme, and perhaps the least Benz-like; it’s more reminiscent of a hybrid or electric vehicle, providing the same information but in a less traditional format.

All the usual electronic customization options for the interior are present, including the fragrance dispenser first seen on the S-Class and a new 64-color selectable ambient lighting feature.

Exact trunk volume for the new E-Class was not available at publication time, but, as in the S-Class, a visual once-over makes it seem a bit smaller than the competition. Most of that competition hovers around the 14.0-cubic-foot mark, with the BMW 528i rating 14.0 cubic feet exactly. The Audi A6 measures at 14.1 cubic feet, the Cadillac CTS comes up a bit shorter at 13.7 cubic feet, and the Lexus GS 200t offers a surprisingly large 18.4 cubic feet of cargo room.

Storage inside the Mercedes-Benz E-Class is decent, with a deep center console and large door storage pockets. The door pockets are particularly interesting: Mercedes uses unique technology to put larger woofers into the dashboard structure, enabling smaller speakers in the doors. That frees up some room, making for more door storage without compromising audio quality.

The 2017 Mercedes-Benz E-Class has not yet been crash-tested, but when it is, the results will be posted here.

Mercedes-Benz continues to focus on safety in the 2017 E-Class, upping the ante this time with self-driving technology. All the other stuff you’d expect in a German luxury car is there, too, such as adaptive cruise control, plenty of airbags and Mercedes’ Pre-Safe predictive occupant-protection system, which tightens belts and applies the brakes more aggressively than the driver may be doing if it detects an impending collision.

There’s also a host of optional driver-assistance systems that add to the experience, some of which start to incorporate autonomous driving technology. The E300’s adaptive cruise control now can be had with something called Drive Pilot, which not only maintains distance from the car in front of you but can also follow that car through curves. Steering Pilot includes an active lane change assist: Once you’ve set the cruise control, you can use the turn signals to make the car change lanes without your intervention, so long as the car doesn’t detect a vehicle in the adjacent lane (or one approaching at a high rate of speed, using its long-range rear-facing radar).

A new side radar system is also available. It can detect an impending side impact and take a couple of extra steps to protect occupants: It will rapidly inflate a bladder in the front seat sides that will push you a few inches away from the side of the impact to reduce the shock on your body. It also plays a sound through the audio system to prime muscles in your middle ear, minimizing the shock to your sensitive auditory organs from the loud blasts of airbags and the impact itself.

I experienced this “pink noise” myself during my drive when a tour bus came around a bend and the car decided an impact was likely; it was just a short burst of static over the audio system, but it was fascinating to experience one of these automatic safety systems in action.

But wait, there’s more. Evasive Steering Assist helps you steer around obstacles at low, urban speeds, such as a pedestrian who might have walked out in front of you. Emergency Stop Assist will activate your hazard lights and bring your car to a safe halt if it detects you haven’t touched the steering wheel in a while, assuming you’ve had a medical emergency. Active Brake Assist will brake the car if it detects an impending collision and you don’t react, while the Speed Limit Pilot automatically adjusts your speed to the local speed limit when it changes along the highway. It can be overridden manually.

It has to be said: It doesn’t all work perfectly. During a three-hour highway drive from Carmel Valley, Calif., to San Francisco International Airport, I sampled all these technologies in the Mercedes-Benz E-Class. Drive Pilot works well under most conditions and even lets you take your hands off the wheel while it steers for you for up to 60 seconds. But it sometimes loses its place, such as cresting a rise where the highway also bends. At lower speeds it failed three times to detect a vehicle that was merging into my lane, causing me to hit the brakes to avoid a low-speed collision. And the automatic speed limit adjustment on the cruise control dropped me from 70 to 40 mph when I entered a zone that had trucks exiting the highway for a weigh station check — where the truck speed limit was 40 mph.

Deliveries of the new E300 will begin soon. The standard rear-wheel-drive model starts at $53,075 including destination. The all-wheel-drive 4Matic version starts at $55,575. My test car had the Premium 3 Package, which included bits like Burmester premium audio, automatic parking assist, air suspension, all the mentioned safety systems and more. The estimated price as-tested for my vehicle came to more than $69,000 and could be pushed even higher.

Competitors are almost universally less expensive. The BMW 528i starts at $51,195 and features just about everything the standard E300 does. The Audi A6 and Cadillac CTS start for considerably less — $47,125 for the Audi, $46,555 for the Cadillac — but the Audi gives you a standard leather interior, even on the base model. The Lexus GS 200t is another option for shoppers, starting at $46,565. All these cars offer similar power. Cadillac wins the horsepower war with 268 hp and the lightest curb weight, but of all these models, the E300 remains a top pick.