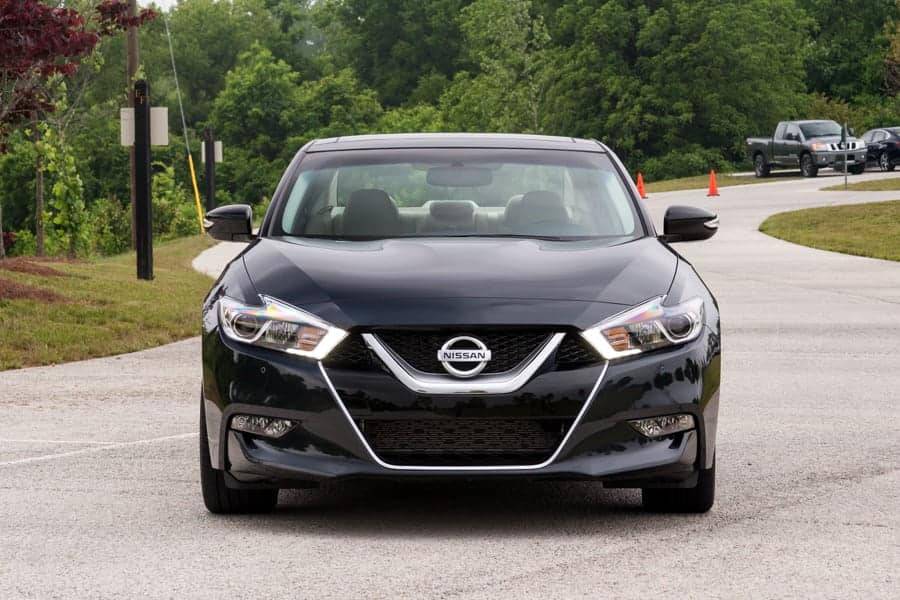 Editor’s note: This review was written in June 2015 about the 2016 Nissan Maxima, but little of substance has changed with this year’s model. To see what’s new for 2017, click here, or check out a side-by-side comparison of the two model years here.

The 2016 Maxima is offered in five trim levels — S, SV, SL, SR and Platinum — that determine the level of equipment; accessories are available, but there are no option packages. We drove an SL, which is priced at $37,715, and the $38,495 SR. That one is the most performance-focused model, with unique suspension bushings, springs, shocks, front stabilizer bar and chassis bracing, in addition to 19-inch alloy wheels with stickier Goodyear tires (prices include an $825 destination charge).

The Maxima brings Nissan’s Energetic Flow design language to its sedan lineup (see the new- and prior-generation 2014 Maxima compared here). Signature cues include a plunging grille bordered by LED daytime running lights and gloss-black pillar finishes that give the roof a floating appearance — something Nissan says is inspired by a fighter jet’s canopy. The front end is aggressive — the car looks menacing when you see it coming up on you in your rearview mirror — and also memorable. It’s a design that demands a reaction, good or bad.

My reaction to the floating rear pillar was that I didn’t especially care for it. The blacked-out front pillars are a subtle touch, but the treatment is jarring at the rear, where the roof drops to meet the body. Dark paint colors minimize the effect if you don’t care for the design cue, either.

Large cars may be known for a forgiving, comfortable ride quality, but that’s not the Maxima formula. Compared with a Chevrolet Impala or Chrysler 300, which both do a good job smoothing out bumps and cracks in the road, the Maxima is a much more connected, tighter-handling car. There’s remarkably little body roll when driving quickly through a corner. You feel bumps, but they’re dealt with in a refined way.

The SR trim level’s unique suspension is considerably firmer and busier; you feel more road imperfections, even smaller ones, and the impact is harsher when you hit a big pavement crack. It’s a little too rough-riding for me, especially considering the good ride-and-handling balance the regular suspension provides.

You’ll want the SR trim if you really care about steering feel, as it offers the best of the bunch. In SL trim, the Maxima’s steering is disappointingly short on feedback; the wheel turns easily but you don’t get a sense of what the tires are experiencing at the road. There’s a Drive Mode Selector with Normal and Sport modes that modifies gas pedal and transmission response and steering assist, as well as — in certain trims — engine sound prevalence in the cabin, but the slightly weightier steering feel in Sport doesn’t do anything to address the lack of feedback. Press the Sport button in an SR, however, and the steering wheel gains a nice, firm heft to it and some feedback through the wheel. It feels right in this performance-focused trim.

All trim levels benefit from the performance of the standard 3.5-liter V-6 engine, which provides smooth, effortless acceleration. Rated at 300 horsepower, the V-6 still has power to spare for a quick pass at highway speeds. It pairs with a continuously variable automatic transmission that’s programmed to act like a conventional automatic at low speeds for a more traditional driving experience, according to Nissan.

The Maxima shows how far CVT technology has come recently, at least when paired with a powerful engine. It’s mostly unobtrusive, with only a hint of the droning that’s associated with this type of transmission when you accelerate hard. If you’ve been driving a car with a conventional automatic, this CVT won’t seem strange or different.

One of the benefits of a CVT is that it’s able to quickly increase engine speed when you want more power because it doesn’t need to shift to a lower gear. The Maxima’s CVT is very responsive; nudge the gas pedal and engine rpm immediately increases, providing more power.

CVTs usually enhance gas mileage, and the Maxima’s EPA-estimated 25 mpg combined rating tops most V-6 competitors by a few mpg or so. One exception is the V-6-powered Acura TLX, which has the same rating and uses a nine-speed automatic.

Overall quality and attention to detail is very good. The standard leather-wrapped steering wheel feels great; it’s even better in the SR, which has Alcantara simulated-suede inserts. The upper sections of the doors are finished with soft-touch material that’s a comfortable alternative to the door armrests. The center console has a padded section to rest your knee against, and there’s real stitching on the doors, console and dashboard. One element that doesn’t look premium, however, is the simulated metal finish on the dashboard, doors and center console. It doesn’t look real.

Fighter jets also informed the layout of the cabin controls, according to Nissan. The center dashboard control panel is angled 7 degrees toward the driver, and center console controls are close at hand.

It’s a more form-fitting cabin compared with some full-size competitors. I like to drive with the seat raised where possible, and in the SL, which is one of two trims with a dual-panel panoramic moonroof, my head was constantly brushing against the roof. For better structural rigidity, the SR does not have a moonroof, and the additional half-inch of front headroom helps considerably.

The new Maxima’s roofline is 1.3 inches lower, which contributes to the sedan’s hunkered-down look. Thankfully, visibility isn’t compromised; forward views are good, as is over-shoulder visibility.

The Maxima has the latest version of Nissan’s NASA-inspired Zero Gravity front seats. They’re finished in cloth (S), leather (SV and SL), premium leather with quilted Alcantara inserts (SR) or premium leather with quilted leather inserts (Platinum). They feel quite a bit spongier than most bucket seats, which tend to have firmer cushioning. I thought they were comfortable during a day of driving, but if you prefer firm seat cushioning, these could take some getting used to — if you do at all.

The backseat isn’t as spacious as the Impala’s or Avalon’s, but it’s big enough to carry adult passengers comfortably. Similar to the front seating area, the available panoramic moonroof reduces headroom.

Controls on the door and dashboard are nicely in reach, but the location of the Drive Mode Selector’s Normal and Sport buttons is a problem; they’re back near the center armrest, and you have to twist your arm awkwardly to press one. Buttons closer to the dashboard — or even on the steering wheel — would be better.

Digital screens are rapidly taking over the dashboards of modern cars, and there are two in the Maxima: a 7-inch screen between the gauges and an 8-inch touch-screen in the center of the dashboard. The gauge cluster screen lets you cycle through different modes to see information like speed and heading, trip data, tire pressure and active safety features. The dashboard screen is the primary display for the standard navigation system and multimedia functions. The Display Commander control knob on the center console can also operate the dashboard touch-screen.

The Maxima’s 14.3-cubic-foot trunk is smaller than most of its competitors’, but it’s about 1 cubic foot bigger than the TLX’s. The trunk is nicely shaped, and the trunk lid’s support arms move within an enclosed area, so there’s no risk of them crushing your cargo. The release straps for the 60/40-split folding backseat are in the trunk. The rear seatbacks fold flat with the trunk floor.

The Maxima has a media bin just ahead of the center console cupholders. The bin is large enough for an iPhone 6 Plus, according to Nissan, and it’s also where the car’s two standard USB ports are located.

As of publication, neither the Insurance Institute for Highway Safety nor the National Highway Traffic Safety Administration had crash-tested the 2016 Maxima. However, previous versions of the car have been tested, so the new version will probably be evaluated at some point.

The top-of-the-line Platinum trim adds a surround camera system with moving-object detection and a drowsy-driver warning system. Drowsy-driver warning compares steering inputs at the beginning of a drive with ones later in the trip to determine if the driver is getting tired and needs to take a break.

Years ago, Nissan dubbed the Maxima the 4-Door Sports Car. It’s an ambitious tagline, but it reflects the fact that the car caters to a specific type of buyer: the driving enthusiast who still needs sedan practicality. The 2016 Maxima is no different from its predecessors in this regard, but its new level of luxury — both in terms of cabin materials and features — now makes it a credible alternative to entry-luxury sedans. If you’re shopping sport sedans, it’s worth a test drive.