This big, bold sedan is the new Ford Taurus. In the past 20 years, the most successful passenger car Ford has ever produced was the original Taurus. Since then, its trucks and SUVs have been hits, but no single car has risen to the heights of the Taurus. Two years ago, Ford brought the name back on an existing car and tried to relight the fire.

Now, the company has significantly redesigned the Taurus — which rides on a platform that’s nearly identical to the recently released Lincoln MKS’ — offering more content at the exact same price as the outgoing 2009 model. Yes, Ford has announced a price: The 2010 Taurus will be $25,170, not including an $825 destination charge.

What do you get for that price? A six-speed automatic transmission is standard, with manual shift paddles available on the uplevel SEL and Limited trim levels. Also standard are 17-inch alloy wheels; 18-, 19- and 20-inchers are also available. Front-wheel drive is standard, with all-wheel drive available as an option. The suspension is all-new as well, but, like the MKS and previous Taurus, the car will likely feel like it rides high off the ground — an attribute buyers enjoy. Ford also promises improved fuel efficiency versus the outgoing Taurus’ 18/28 mpg city/highway.

There’s also a host of available technology and other options, including adaptive cruise control, a collision warning system, push-button start, keypad keyless entry, MyKey — which restricts certain types of driving for parents or fleets — Cross Traffic Alert, Sync, voice-activated navigation, and Active Motion seats. What the heck is that? Basically, the optional seats send minute stimulation to an occupant’s legs and back to help avoid fatigue and back pain.

This is a lot of car here. We don’t have specs on the interior dimensions, but we assume they’ll be similar to the comfortable MKS — which starts at $38,490. The top-of-the-line 2009 Taurus starts at $32,520 with all-wheel drive. Once we get the full list of standard features for the Taurus, we’ll be interested to see how they stack up. For now, check out the photos below.

Most Popular All-Wheel-Drive SUVs on Cars.com
More From Cars.com 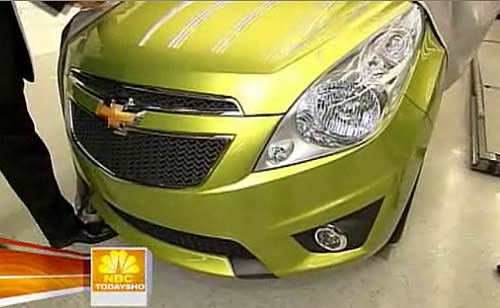