A small squad of new Mini Cooper Hardtops was flinging around the narrow mountain roads of Puerto Rico Thursday as journalists tested the redesigned icon. I piloted a bright Volcanic Orange Mini Cooper S with a six-speed automatic and one Deep Blue Cooper with a six-speed manual transmission, and both impressed more than the tropical view.

The day started with the Cooper S. Its new 189-horsepower, turbocharged 2.0-liter four-cylinder, making 207 pounds-feet of torque, is seriously refined. There’s no quirky Mini attitude in this powerplant. It powered ascensions through mountain passes with steady bursts of acceleration between shifts.

Sadly, the automatic transmission was the only one available to test in the S. It wasn’t a terrible option, but for the high-performance model many buyers would likely opt for the manual. When put into Sport mode and shifting manually with steering-wheel-mounted paddles — now a standard setup of pull in on the right side to upshift and the left side to downshift — the Cooper S hustles well, but like many others, it upshifts a bit before aggressive drivers will want.

What those drivers will like is the Sport mode. Adjustable driving modes — Normal, Sport and Green — are standard on all Minis for 2014. Sport mode also can be set for sportier handling or acceleration or both. When the powertrain is in this mode, the engine revs harder when you hit the gas, and when shifting there is often a nice “popping” sound from the exhaust that will make some drivers smile.

The base Cooper’s engine isn’t nearly as fast, but with 134 hp and 162 pounds-feet of torque, it is not a typical economy car despite an expected EPA rating northward of 40 mpg highway. The thing is, all the test base Coopers were equipped with a manual transmission, which certainly got the most out of the smaller powerplant.

While the clutch was somewhat light and the shifter relatively short, it did take some getting used to. It is a setup that’s more for the casual driver and not the enthusiast.

While both engines were quite impressive, the handling, ride and interior are the stars of the new Mini.

I’ll detail all the improvements in a full review next week, including what I consider the best-looking navigation screen I’ve tested to date. For now, here is a small sampling of photos from the drive. Click on any image for a larger version.

Editor’s note: Cars.com paid for its own travel and accommodations to attend this manufacturer’s event.

The drive route took us along both beach and mountain roads.

The cargo area is significantly larger than before with an adjustable shelf that allows cargo to be dropped down below the floor like in a minivan.

This was one of the wider streets we traveled on.

A 12-speaker Harman Kardon sound system is optional and sounded decent if not exceptional. What you’ll notice in this picture is the LED ring around the center cluster. In this photo, it’s mimicking the tachometer: The left side is white when the car is idling, and the right side’s orange is the redline. The white light moves as you rev the engine. The colors change and move when you adjust temperature, fan speed, volume and other functions.

The optional iPhone integration in the armrest is so over the top that not only does your smartphone lock in tight into a custom cradle, but there’s a little fan underneath it to keep the phone cool.

Mini won’t stop talking about the Cooper’s “kart-like” handling. We found an RC car racetrack on our trip. Is that the next step in whip-snapping handling terminology?

Mini brought out plenty of cars for journalists but only in four color combinations. Here’s a bevy of Blazing Red Coopers.

The Volcanic Orange on the Cooper S was definitely my favorite color scheme … to test. I’d probably buy something a bit more subdued.

There were some smooth roads during our drive but also plenty of pockmarked pavement. That was fine by me. It meant this test simulated Chicago streets accurately.

My time behind the wheel covered nearly six hours of driving and only a few brief minutes in the rain, which turned out to be terrific luck. It rains a lot in Puerto Rico, but on the bright side that means lots of rainbows. Don’t ask why this Mini was parked on a dock. 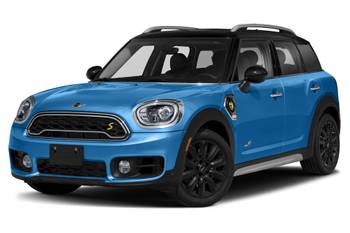 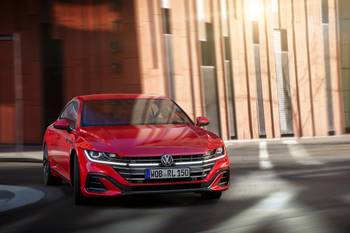 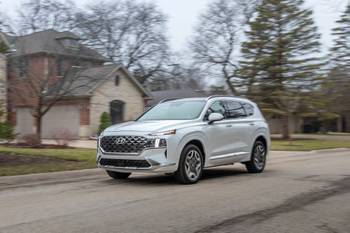