Kia’s best-selling car, the Optima, is redesigned with what Kia calls more mature styling; it’s also longer and wider than its predecessor and gets a new turbocharged engine.

LX, LX Turbo, EX, SX Turbo and SXL trims will be available when the car goes on sale in late 2015. It will be built at the automaker’s West Point, Ga., facility.

ExteriorWhen the original Optima debuted, it was positioned as a fresh alternative to its bland-looking midsize sedan competitors. The new version builds on that mission subtlety with swept-back headlights and a revised tiger-shark nose that resembles the brand’s K900 luxury sedan. Newly available are high-intensity-discharge headlights with Dynamic Bending Lamps and High Beam Assist; they illuminate the road around corners.

InteriorKia says the wheelbase has been lengthened by 0.4 inches and widened by an inch, making for a slightly roomier cabin and greater trunk capacity than the outgoing model.

If the Optima’s exterior styling is reminiscent of the brand’s upscale Cadenza and K900 sedans, Kia wants the same effect inside. The automaker is going for a premium look and feel and says the new cabin wears more soft-touch materials and classier-looking finishes such as stitching along the dash and doors and metallic accents throughout.

The automaker paid extra attention to the Optima’s seats; it said the new sedan’s front seats have more upper back and thigh support and deeper side bolsters with more supportive foam. Newly optional is a height-adjustable front passenger seat.

The controls have been reorganized into a cleaner, streamlined design, and the Optima features the latest version of Kia’s UVO 8-inch touch-screen multimedia system. The Optima is the first Kia to use the Android Auto and Apple CarPlay smartphone compatibility systems. They allow drivers to access and control a suite of smartphone apps using the car’s touch-screen.

Under the HoodThree engines are available. The LX and EX models use a carryover 185-horsepower, 2.4-liter four-cylinder and the SXL and SX Turbo models use last year’s 247-hp, turbocharged 2.0-liter four-cylinder. Both are paired with a six-speed automatic transmission; the SX and SXL trims add paddle shifters.
New this year for the LX trim is a turbocharged 1.6-liter four-cylinder engine making an estimated 178 hp. It pairs with Kia’s first seven-speed dual-clutch automatic transmission. No word yet on fuel economy ratings.
SafetyNew on SX and SXL trims is an available 360-degree Around View Monitor camera. Other available safety features include adaptive cruise control, blind spot warning, rear cross-traffic alert and Autonomous Emergency Braking.

What's the Best Car for an Uber Driver? 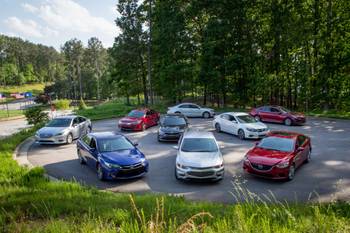 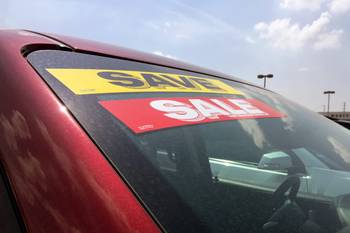