Editor’s note: This Car Seat Check was written in September 2015 about the 2016 Kia Sorento with the optional third row. Little of substance has changed with this year’s model. To see what’s new for Kia’s 2017 Sorento SUV, click here, or check out a side-by-side comparison of the two model years.

CARS.COM — For families who only need a third-row bench for carpooling, the Kia Sorento is an SUV to consider. This SUV has an optional third row seating that could work well for hauling kiddos to school and back, especially with its sliding second row seating that allows for legroom adjustments and stows easily for those high-capacity errand-running days. Earlier this year, we tested the two-row Sorento. It earned A and B grades in our Car Seat Check.

Parents who use rear-facing infant safety seats will note that there’s a scoring discrepancy between the two-row Sorento SUV and the three-row seating version. The infant seat earned a B in the two-row Sorento because the backseat is stationary, whereas in the three-row Sorento, the second row slides forward and back. When we install car seats in a car with a sliding backseat, we slide the backseat as far back as possible, which explains the grade discrepancy.

The Sorento’s optional third row doesn’t have lower Latch anchors or tether anchors. The lack of tether anchors means families can only have kids who use booster seats or just seat belts back there. It is not safe to use a forward-facing car seat in the third row.

In the second and third row, the Sorento’s seat belt buckles are floppy, which can be difficult to grasp for younger kids trying to buckle up on their own.

To access the Kia Sorento’s third row from the driver’s side, there’s no magic lever to make it easy. First you need to manually slide the second-row seat forward and then fold the seatback. It’s cumbersome at best. Also, the opening to the third row is narrow. 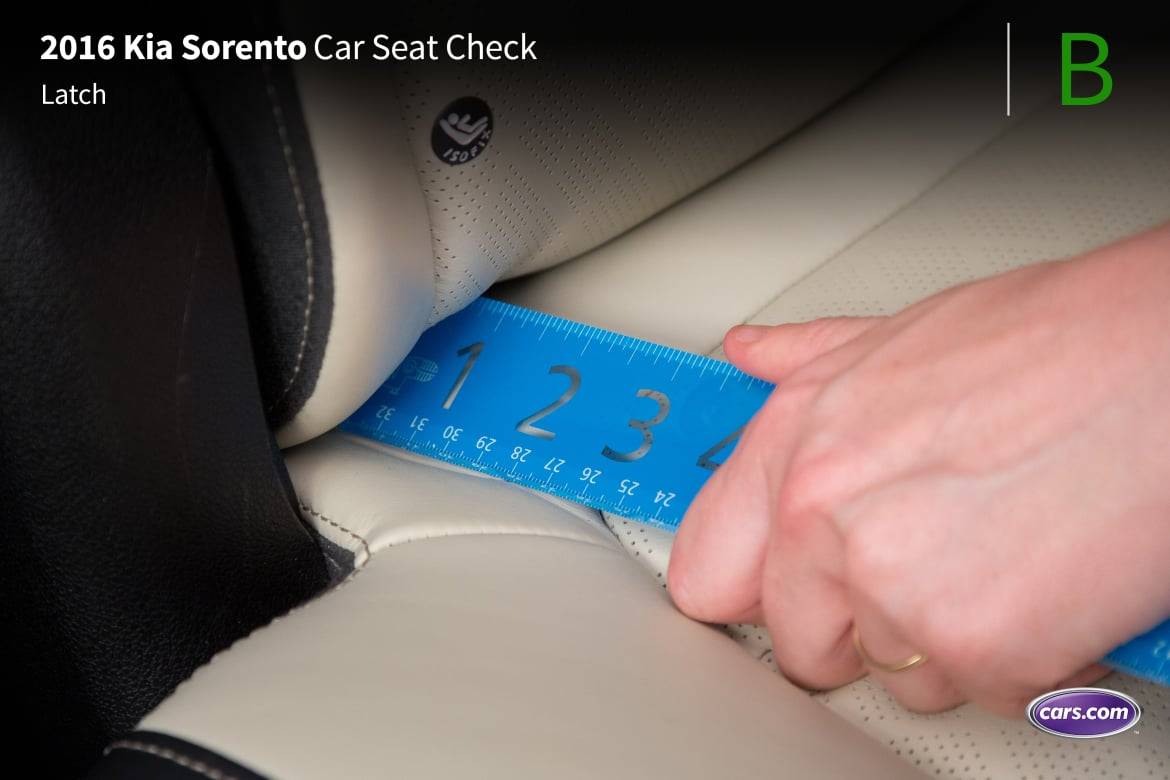 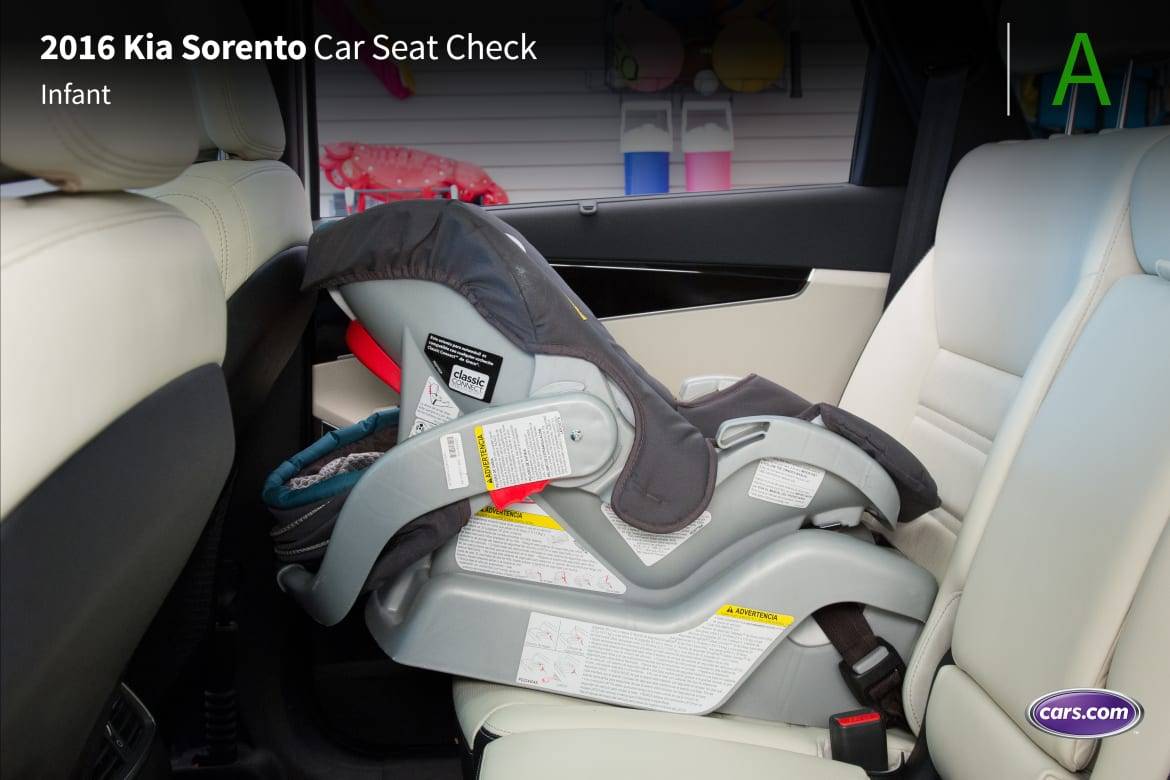 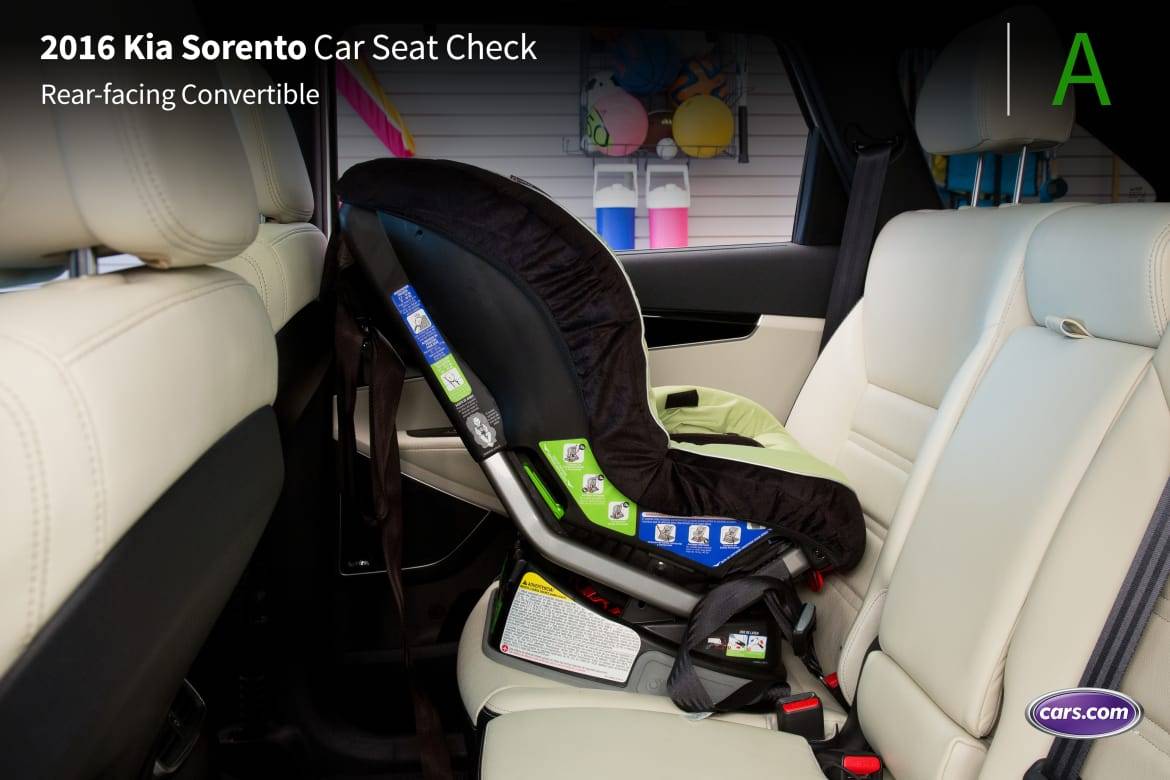 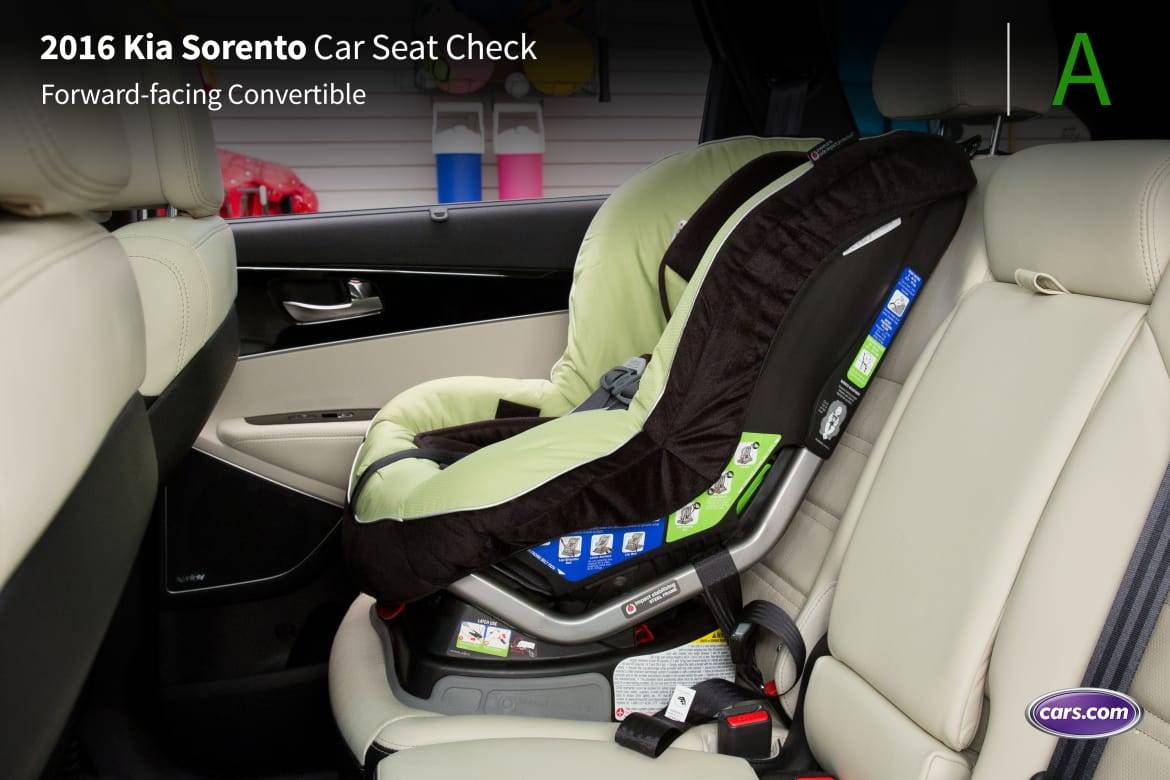 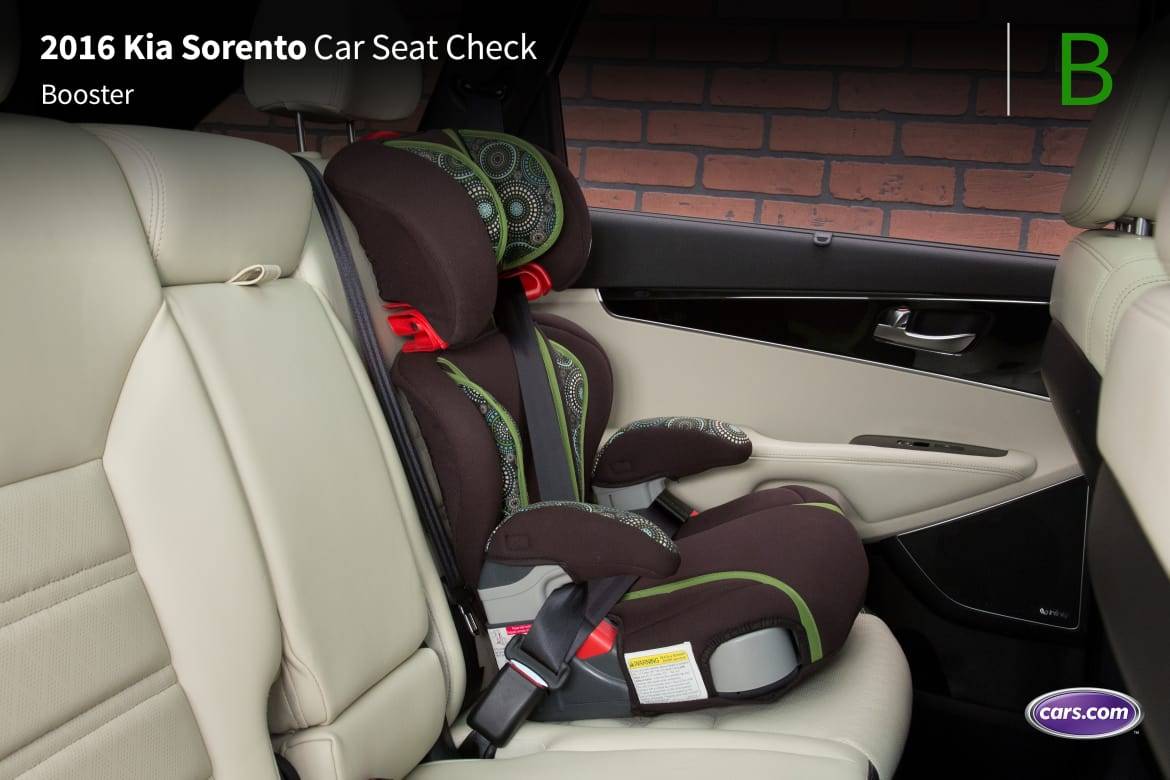 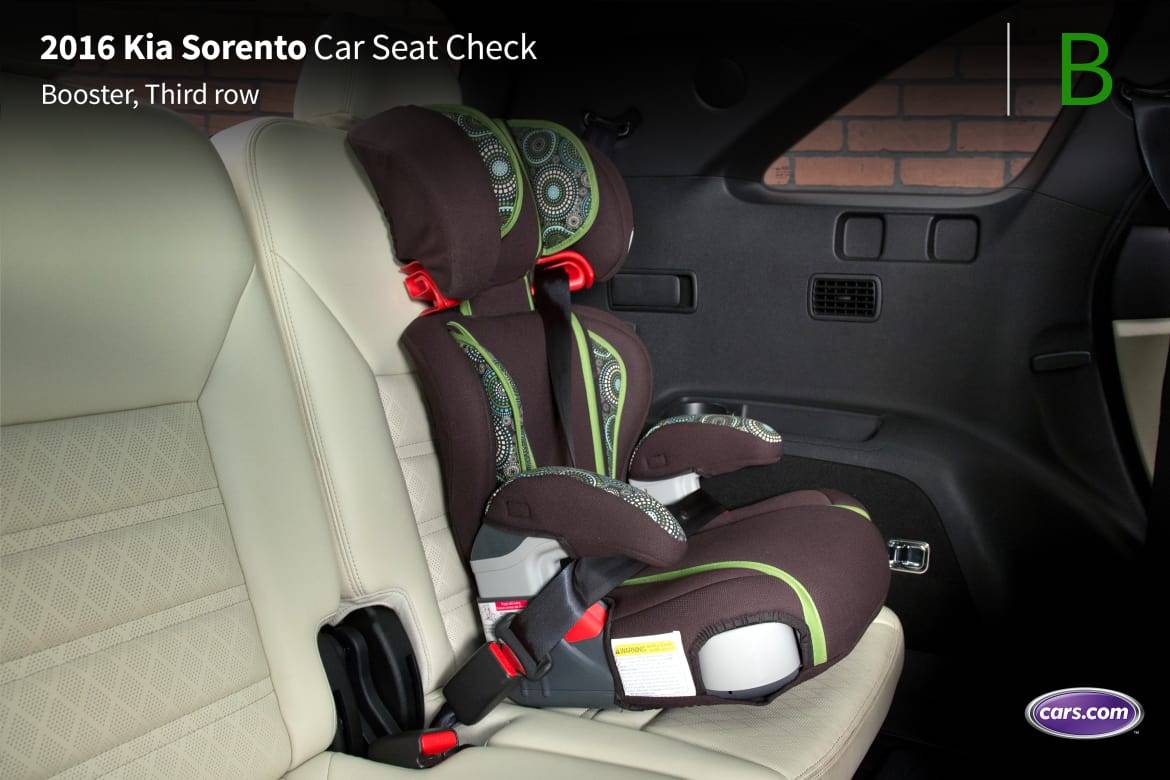 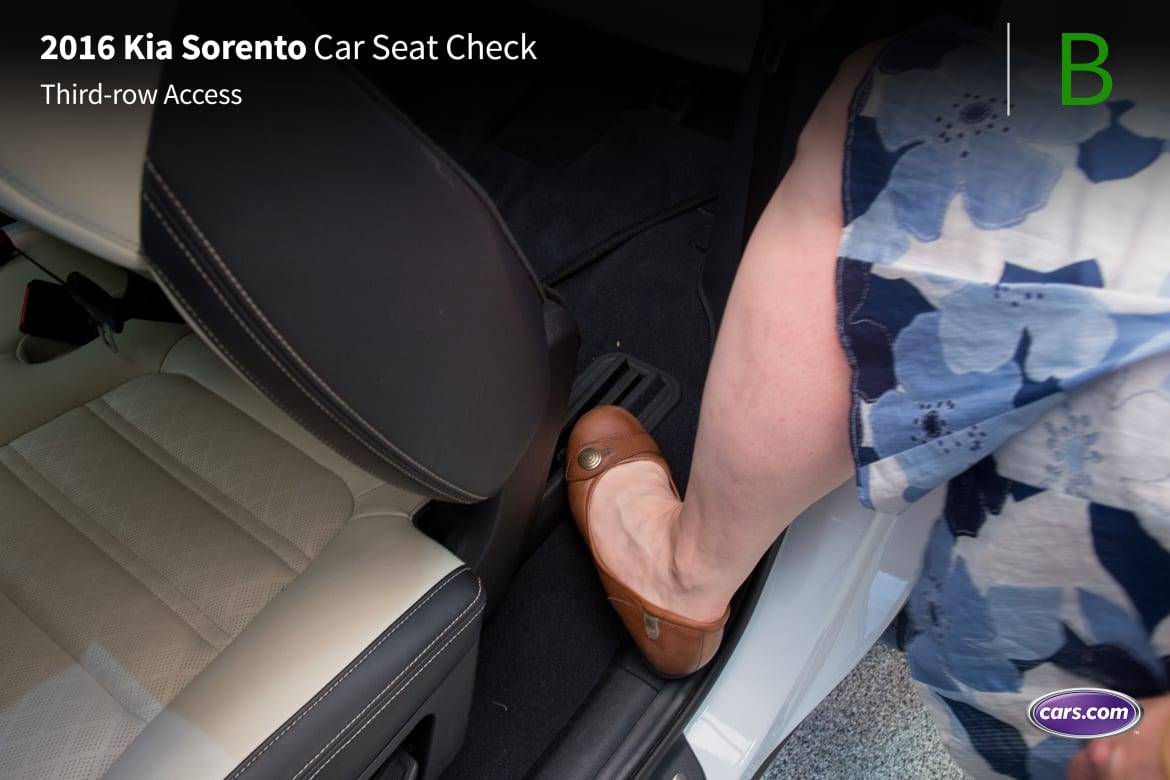 1/7
2016 Kia Sorento | Cars.com photo by Evan Sears
Don’t miss out on the latest news, reviews and videos from our in-house experts. Get updates in your inbox.