Bison are an icon of the American frontier, conjuring images of roaming herds grazing the prairies and plains during Westward Expansion. But when it’s the Chevrolet Colorado ZR2 Bison — the loaded-up off-road package for the Bow-Tie brand’s mid-size pickup truck — those images dissolve into rock crawling, hill ascending and water fording on a long-haul overlanding safari. Well, I had only an evening with the Bison in Chicago, where the only terrain to traverse is the urban canyon and congested expressways. So, I did the next most logical thing … I drove it to Jollibee for an Amazing Aloha Burger, Jolly Spaghetti and a Halo-Halo for dessert.

Here are five totally rando things I noticed during my evening behind the wheel of the 2019 Chevrolet Colorado ZR2 Bison:

1. No One’s Gonna Mistake It for the Civilian Colorado

Co-developed in a partnership between Chevy and Montana-based AEV (or American Expedition Vehicles if you’re not into the whole brevity thing) to be “the most-capable off-road truck in its class,” the Colorado ZR2 Bison emerged in January with an arsenal of special features and equipment for off-the-asphalt exploits 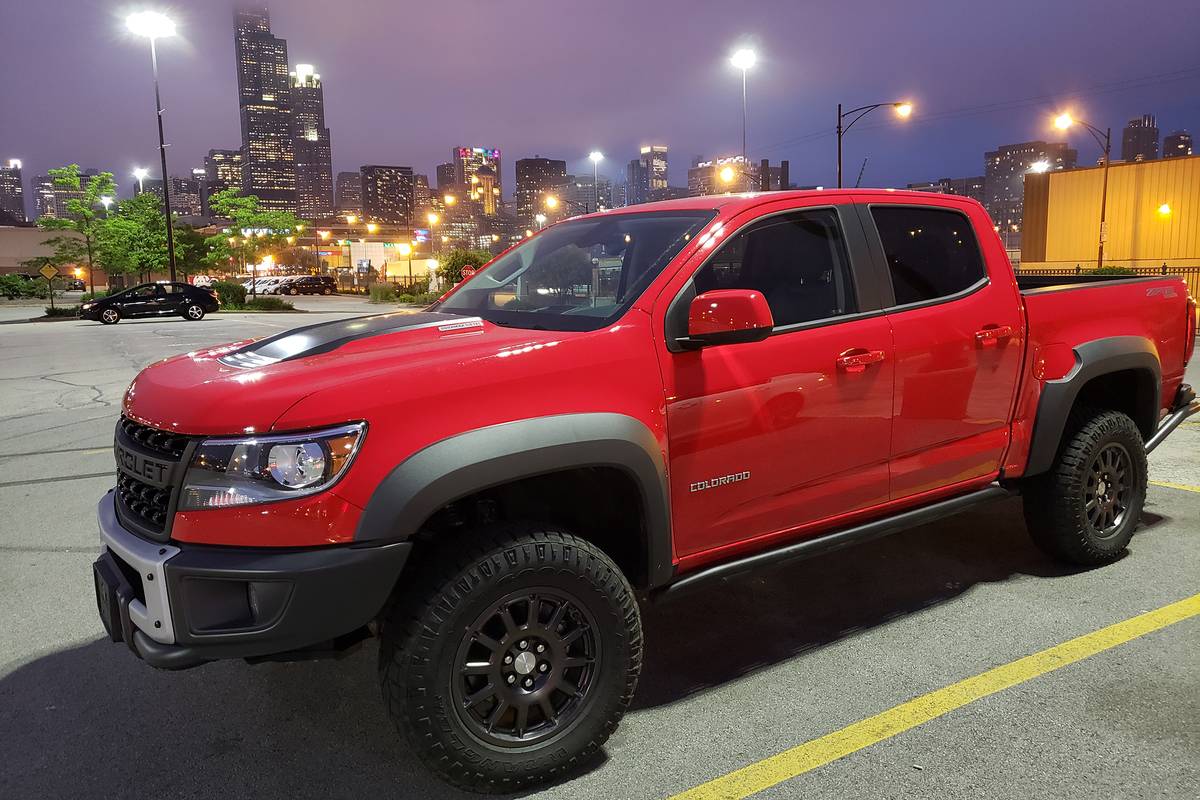 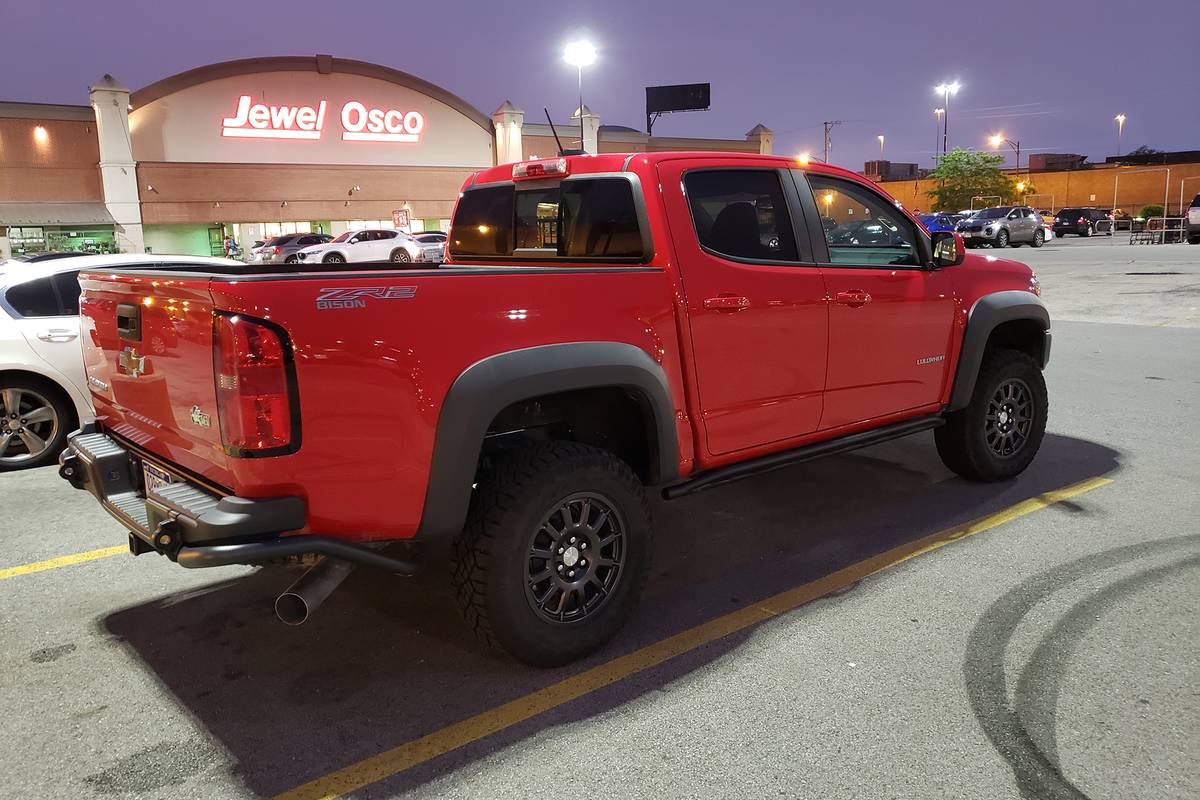 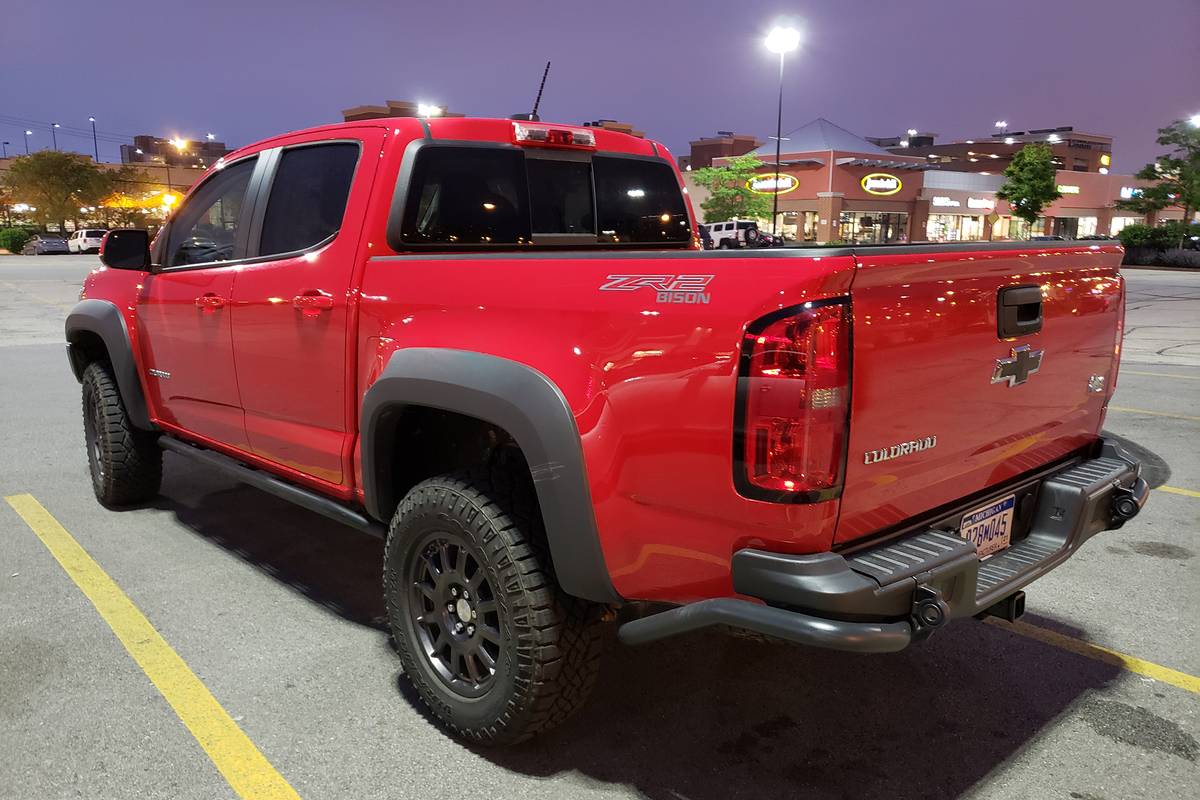 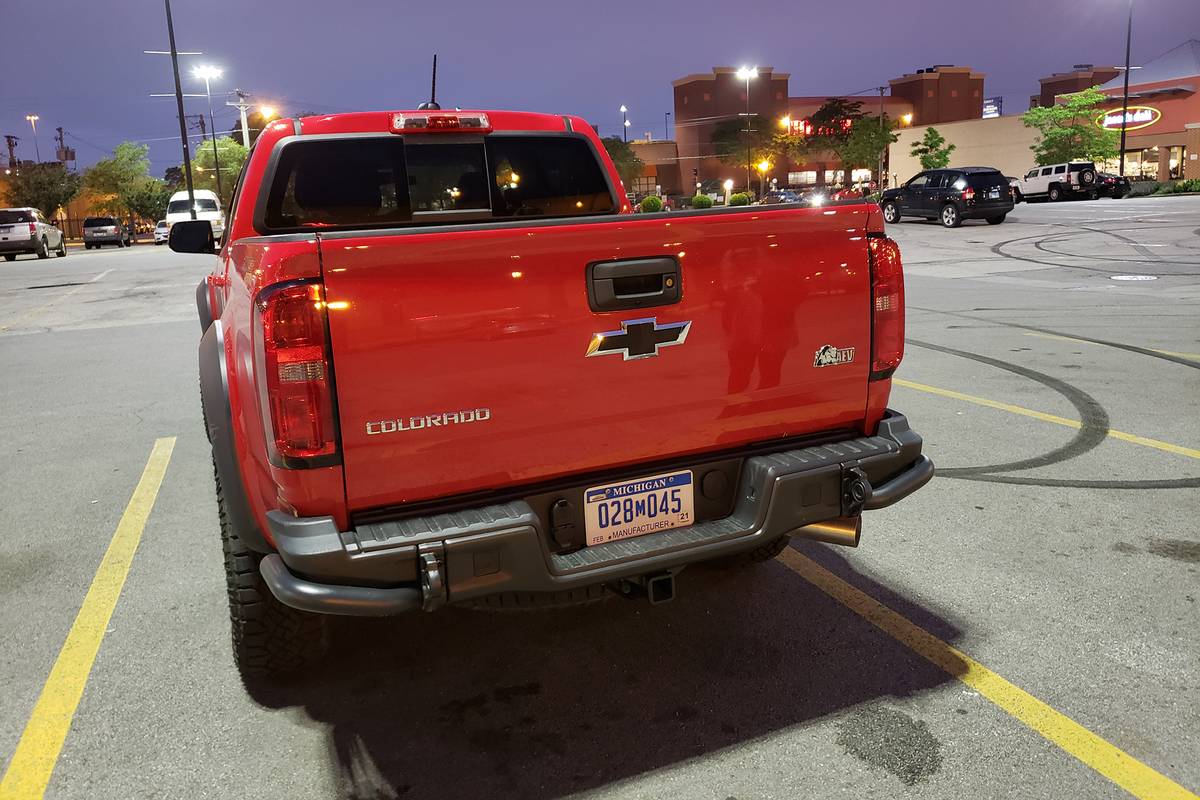 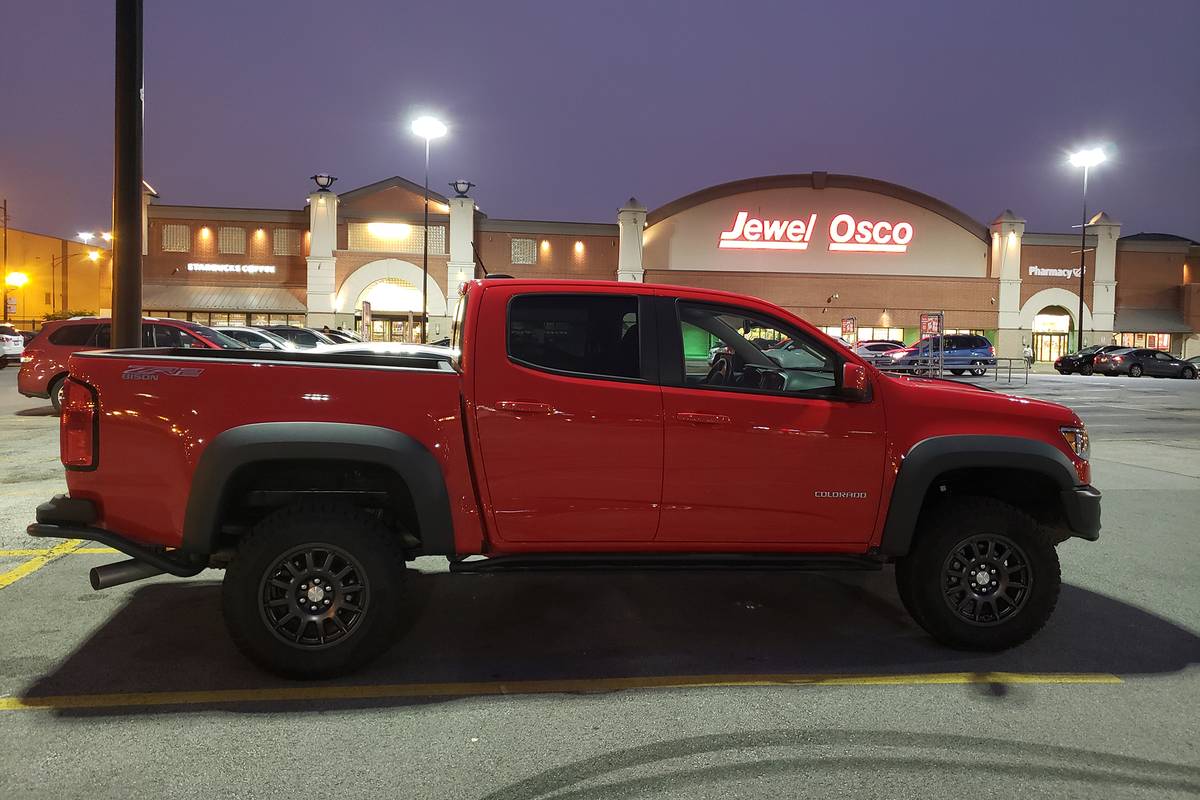 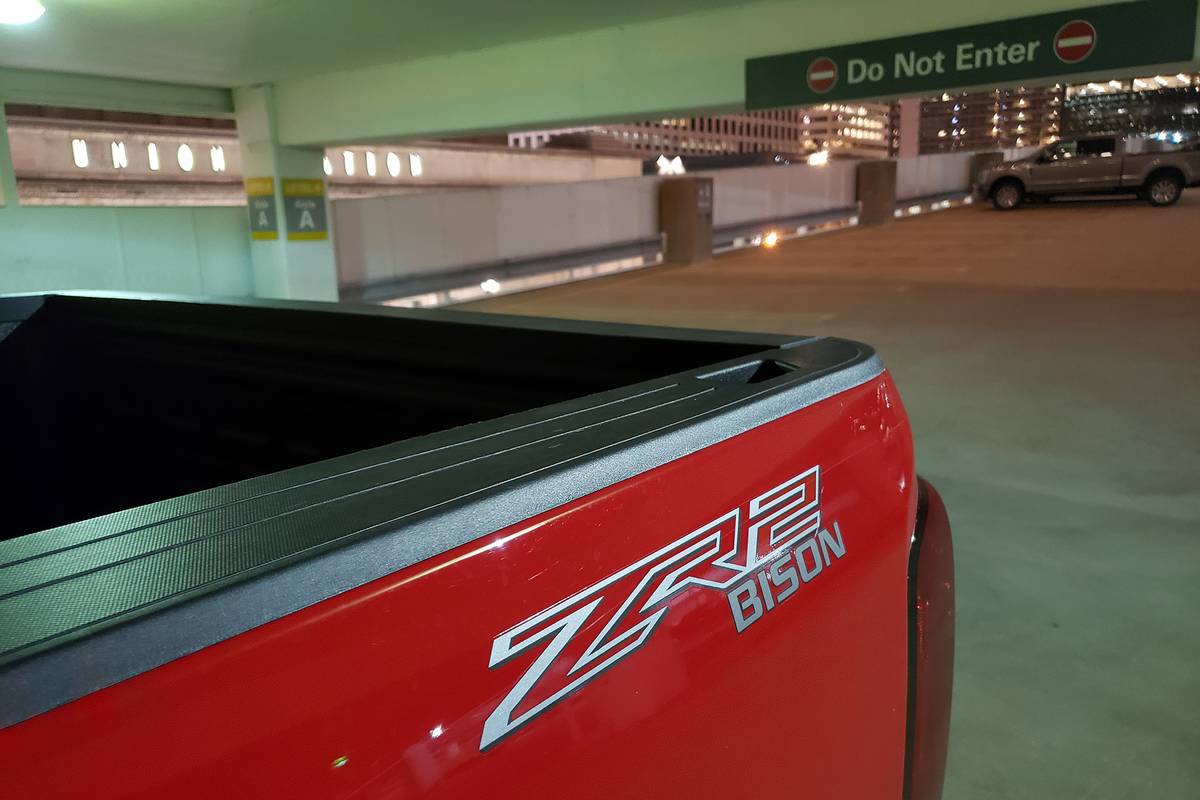 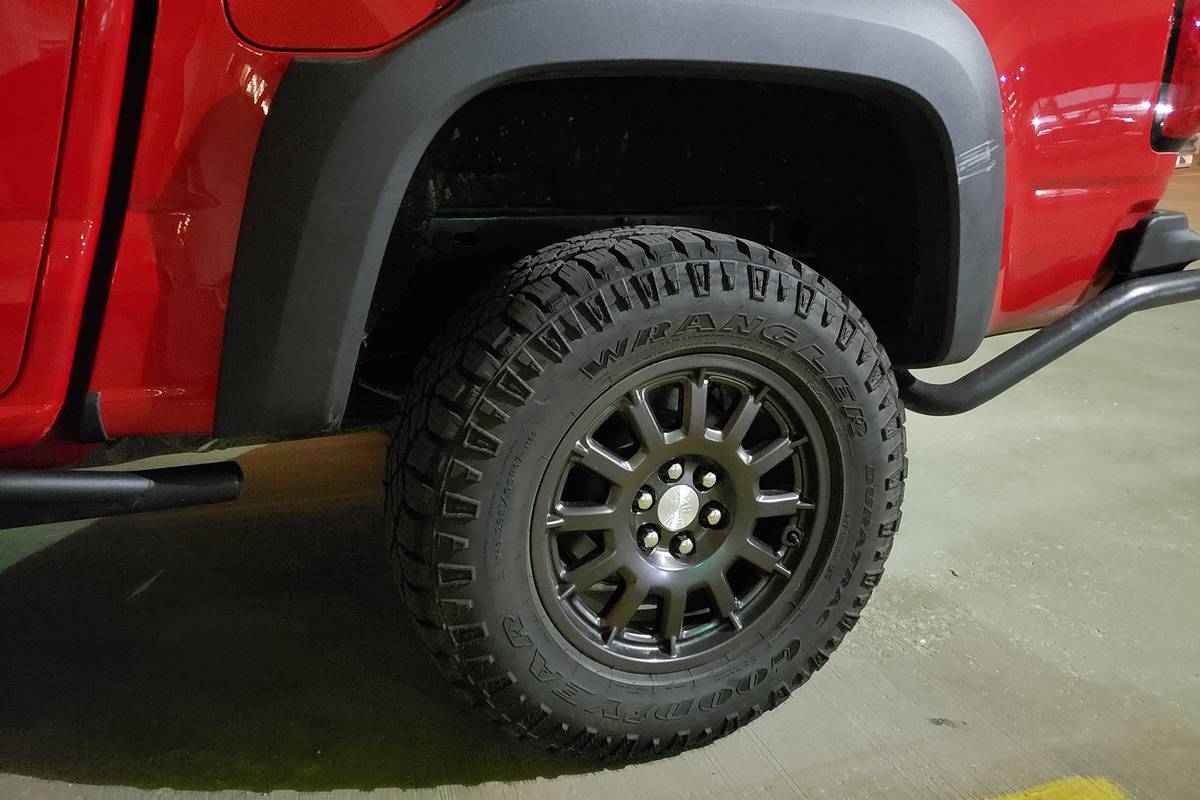 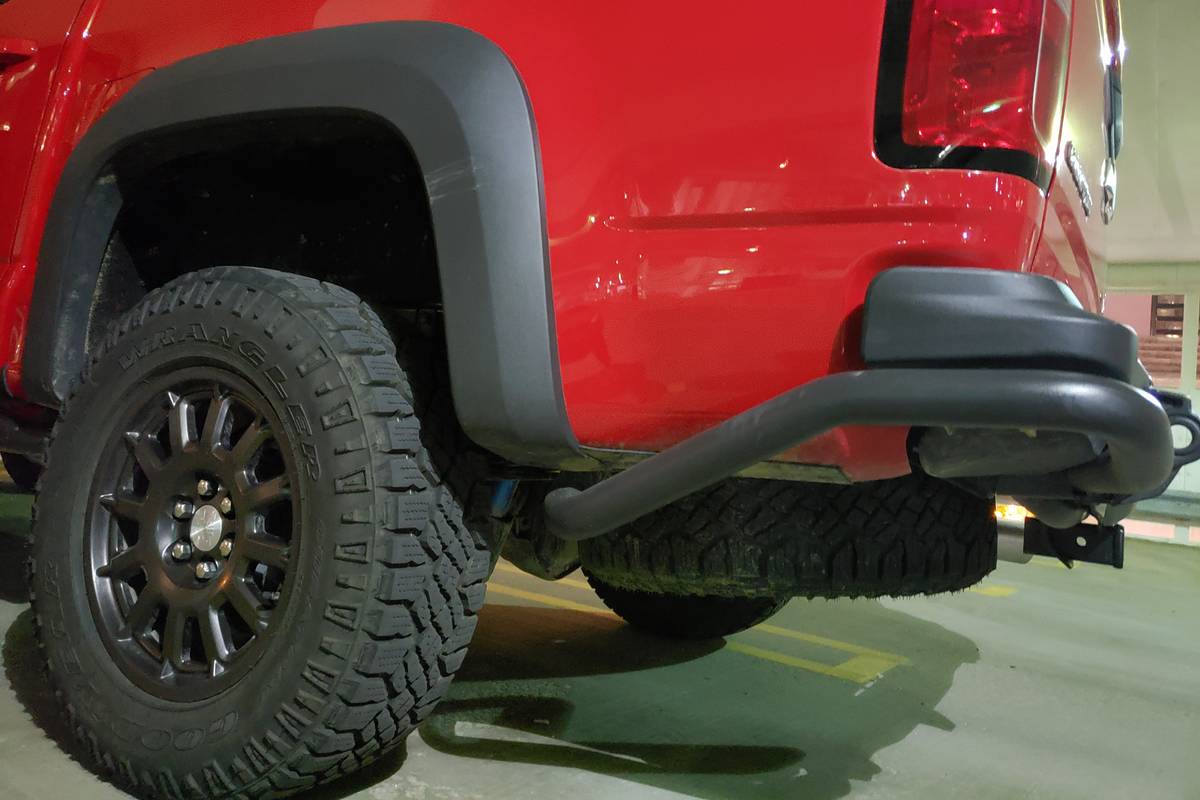 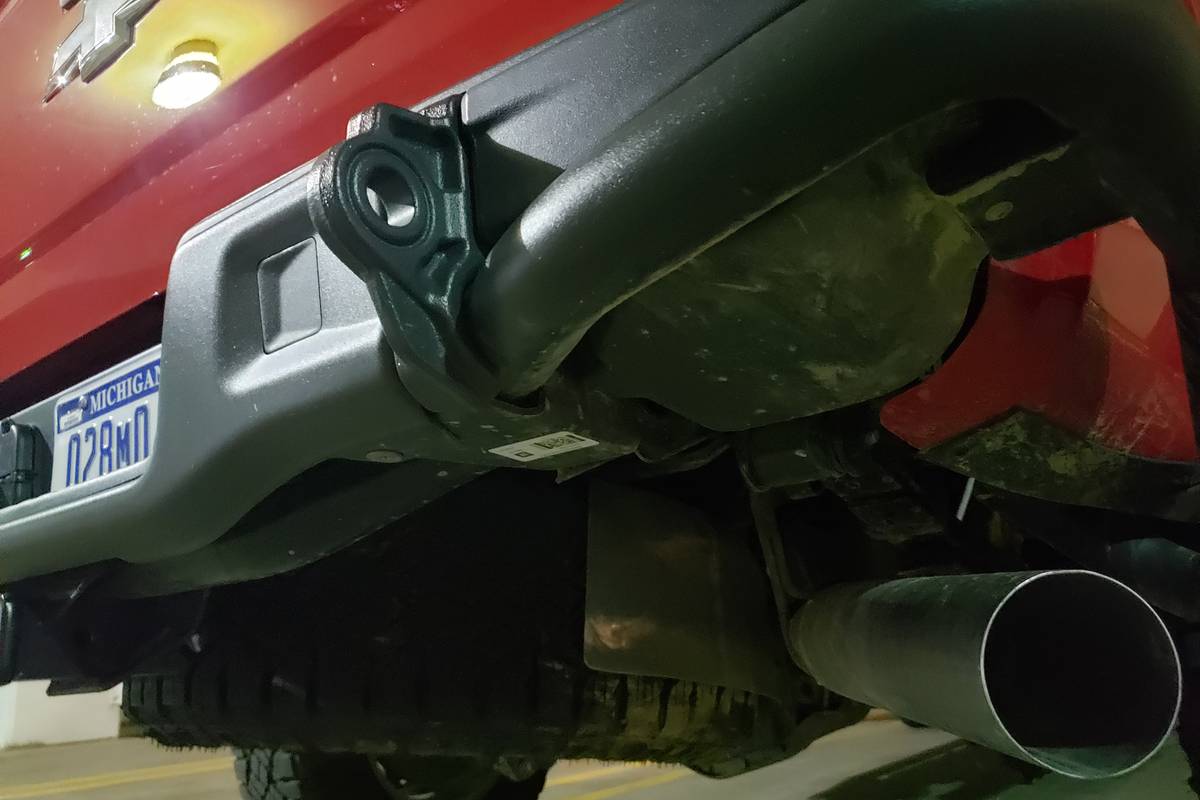 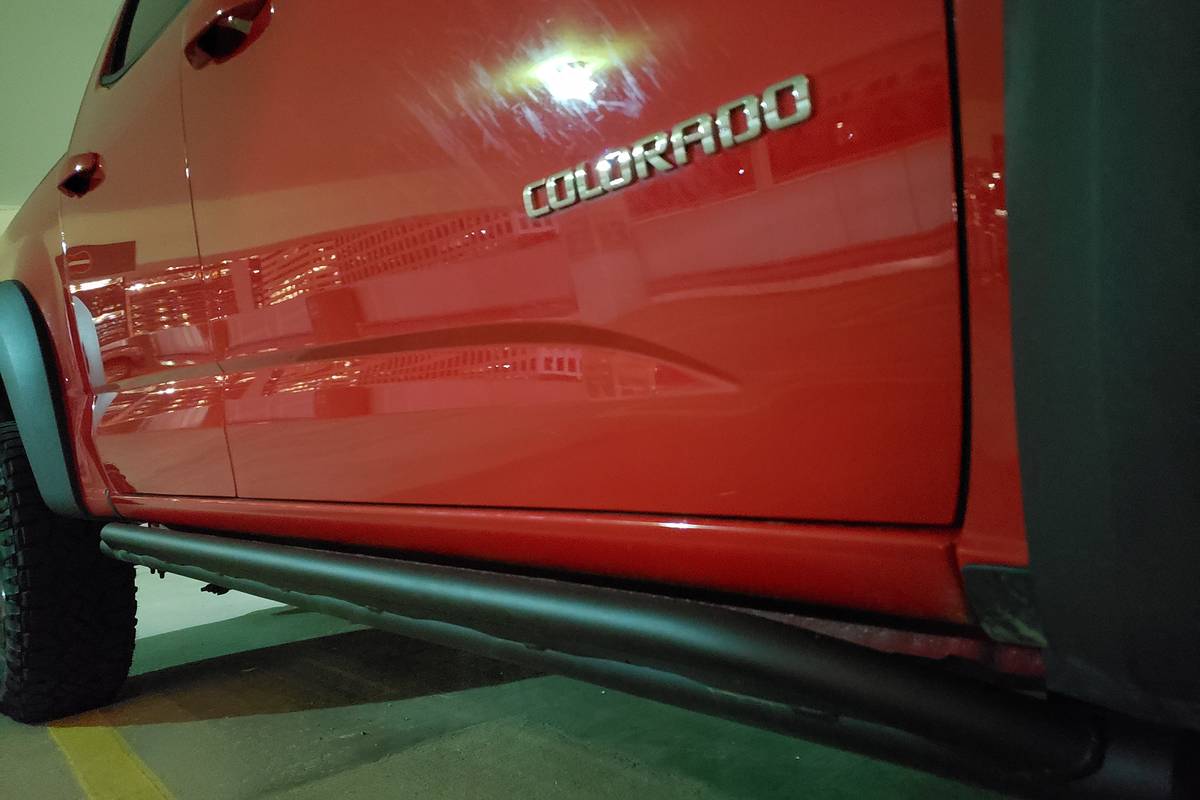 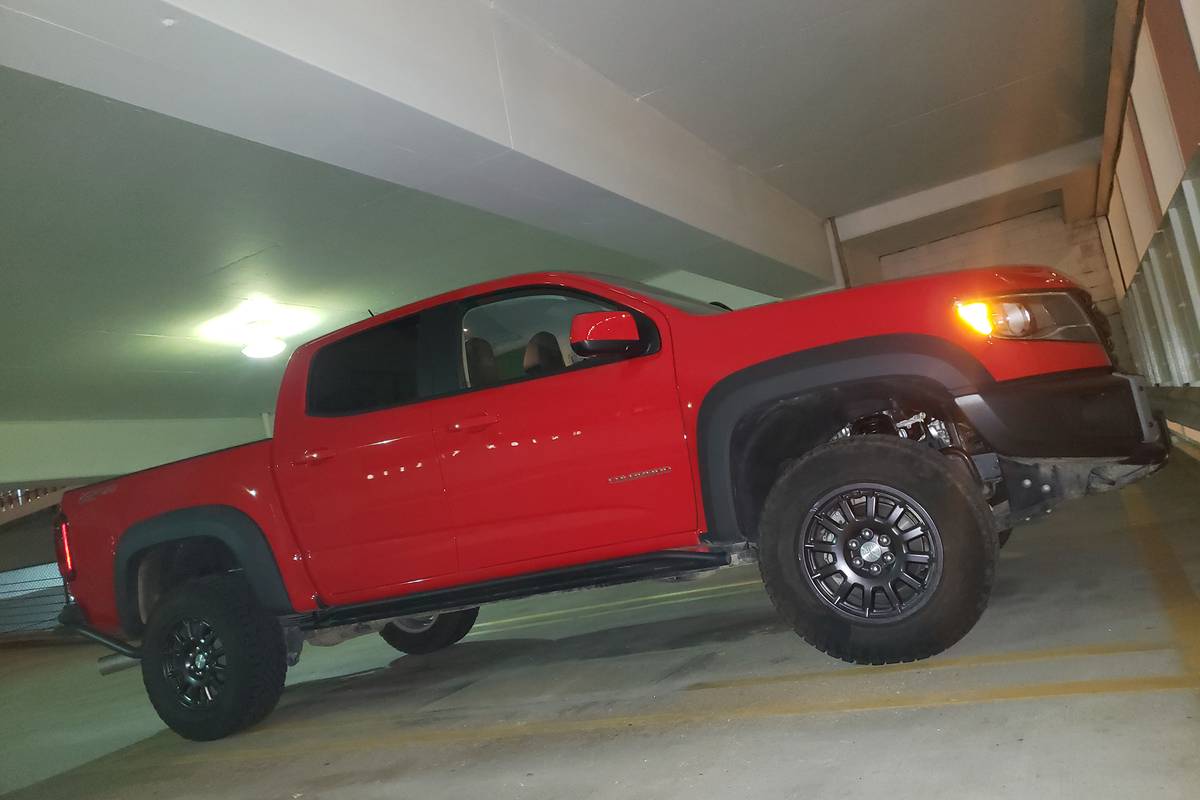 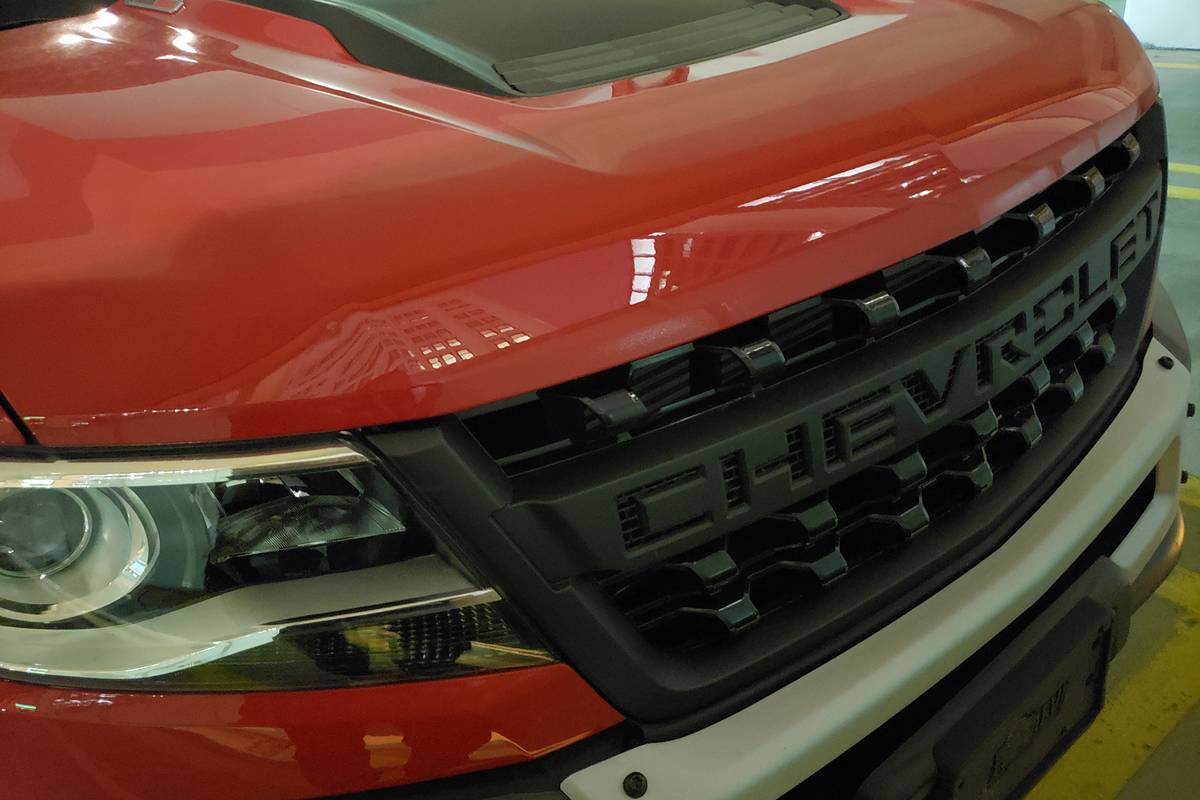 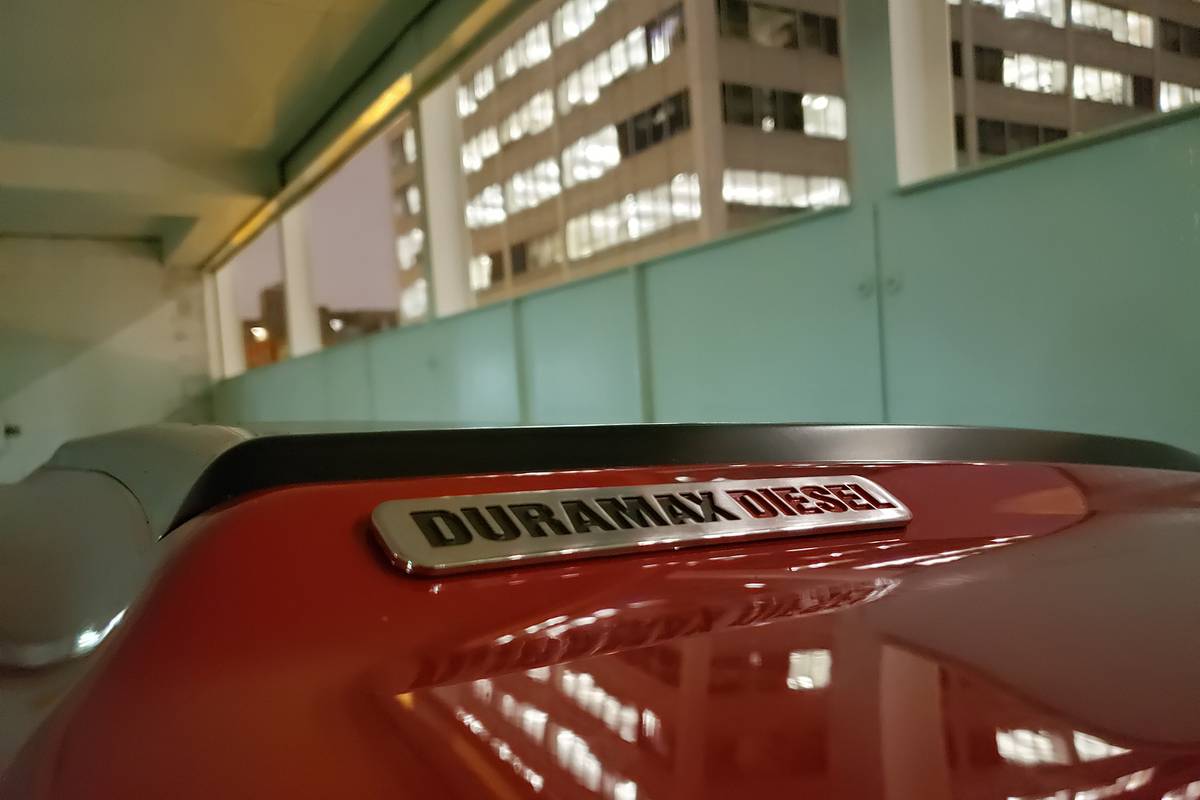 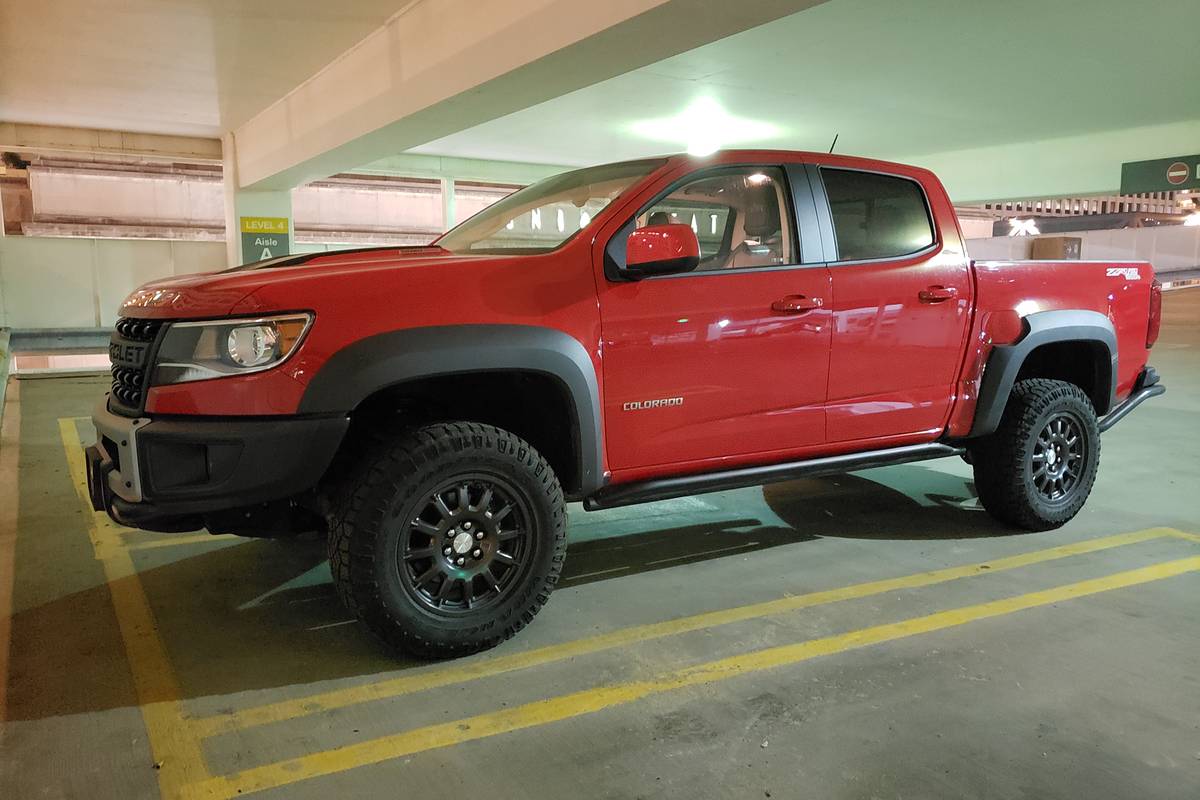 The upgrade is immediately evident, from the abundant AEV badging inside and out, ZR2 Bison decals and “Chevrolet” in all caps stretched across the grille in place of the traditional bow-tie emblem. That’s in addition to the reimagined front bumper (which allows for a 25.3-degree approach angle that’s admittedly worse than the regular ZR2’s 30 degrees), the aggressivehood scoop adorned with a metal Duramax Diesel placard denoting the turbo-diesel 2.8-liter V-6 engine mated to a six-speed automatic transmission, stamped-steel front and rear bumpers, a quintet of steel underbody skid plates, dramatically flared fenders and model-specific aluminum wheels.

2. A Bison Costs More Than a Buffalo Nickel

A base two-wheel-drive Colorado starts at $22,395 (including a $1,095 destination charge). My test car rang in at $53,245 — the Bison package alone is $5,750 — more than twice the entry price. If you’re actually gonna go overlanding on a regular basis, consider it money well spent, but if you’re mostly gonna use it for takeout runs to Filipino fast-food joints, commuting and the occasional loveseat move, you better get your money’s worth out of the humblebrag.

3. Exhaust Braking Is a Thing

If, like me, you don’t drive a lot of trucks or do much (or any) off-roading or heavy hauling, you may not be familiar with diesel exhaust braking. So, when I saw the curious button on the panel under the climate controls labeled “Exhaust Brake” with a picture of a little trailer on it, I wondered, “What does this button do?” Exhaust braking allows the driver to preserve their brake pads while slowing the truck on a steep downhill grade by choking off the exhaust, forcing it back into the engine and causing it to run more slowly and even come to a stop. Now ya know.

4. Rear Seat Reminder Reminded Me How Forgetful I Am

After Jollibee, my wife and I picked up a few groceries, then I dropped her off at our building with the shopping bags and went to park the car in the garage, forgetting that I’d left my backpack with a MacBook in the rear seat of the crew cab. Eventually, I would’ve remembered the oversight — at around 3 a.m. waking up with a jolt of total recall — but the Bison’s Rear Seat Reminder spared me the interruption to my slumber.

The feature detects when a rear door is opened up to 10 minutes before the engine is started, interpreting that as something being placed in the backseat; when the ignition is subsequently turned off, a chime sounds and a message appears in the driver information display to remind you to check the rear seat. For me, it was just my backpack, but for a busy parent, it may just be your silently snoozing baby in their car seat (don’t judge, it happens to a lot of people, hence this handy feature). 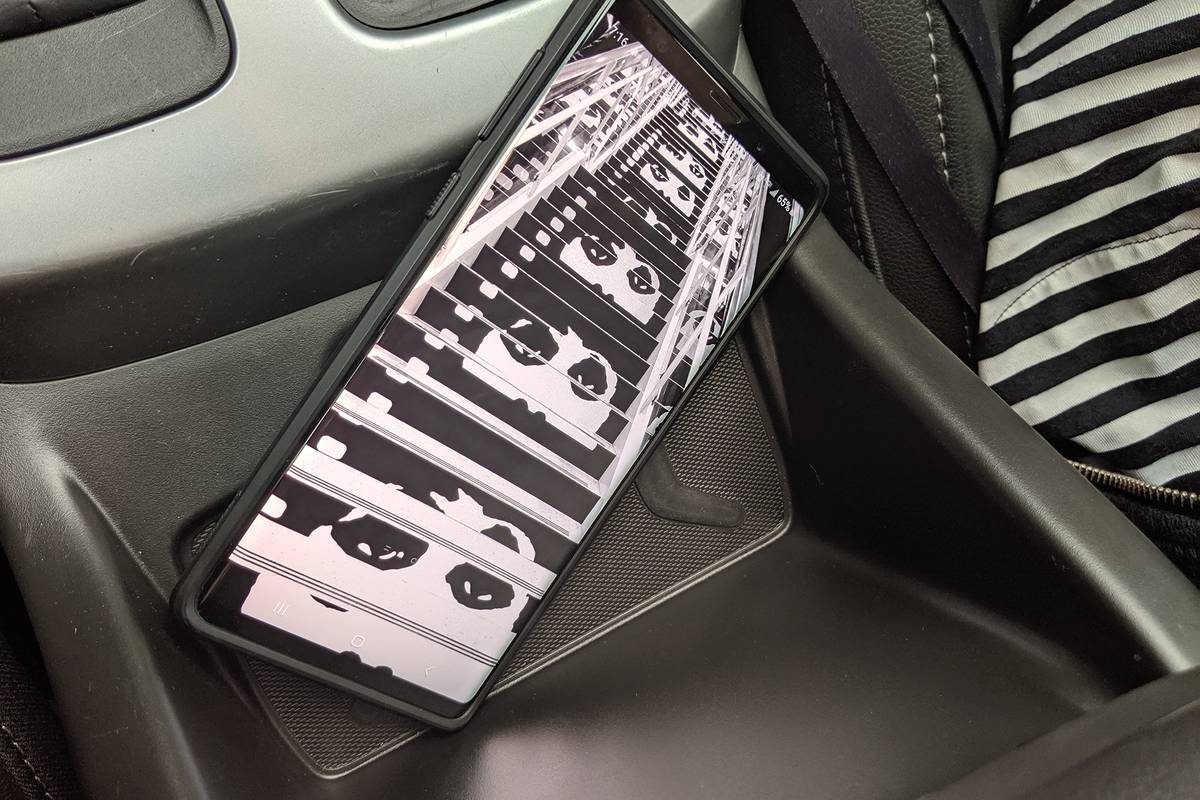 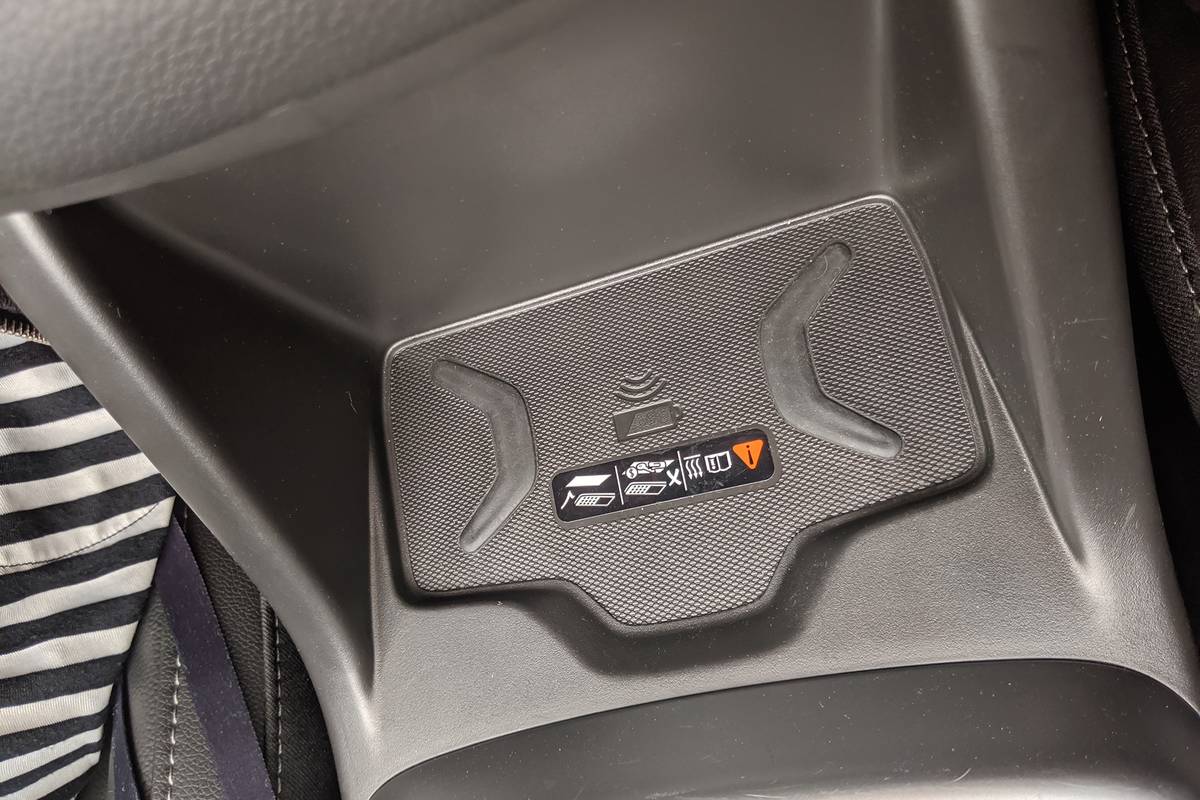 Wireless charging in cars is arguably one of the most convenient tech features to come down the pike of progress in quite some time — if your phone fits in the charge port, that is. But the Bison’s port was, like, iPhone size, and my Galaxy Note9 (roughly 6.4 inches by 3 inches) just wasn’t getting in there. Bummer.

6. Tailgates Have Come a Long Way Since My ’87 Dodge Ram

As I’ve stated, I don’t drive a lot of pickups, so advancements in tailgate technology, however old-hat to some, still tickle me. In this case, I’m referring to the soft-open feature of the Bison’s tailgate — you just pull the handle and let it go, and it lowers as if it’s trying not to wake the baby. That’s a far cry from the tailgate of my first car as a teenager, a 1987 Dodge Ram, which opened in an unfettered freefall with a metallic groan like the hull of the Titanic buckling.