The verdict: A strong dose of sportiness — and luxury in the highest trim level — elevates the 2019 Mazda CX-9’s driving experience, but the trade-off is less cargo space and third-row passenger room than most competitors.

Versus the competition: The CX-9’s buttoned-down handling and responsive, turbocharged drivetrain are strengths that contribute to one of the best driving experiences in the three-row SUV class, but competitors like the Honda Pilot, Volkswagen Atlas and brand-new Kia Telluride (see their specs compared) have roomier interiors that are better for families with kids (and all the stuff that goes with them).

The CX-9 was last redesigned for the 2016 model year. For 2019, Touring and higher trim levels gain Apple CarPlay and Android Auto smartphone connectivity; the rest of the changes are listed here. We tested a top-of-the-line Signature trim with all-wheel drive. Its only option was $300 Machine Gray paint, which brought its as-tested price to $46,710, including a $1,045 destination charge.

You can usually count on Mazda to deliver driving performance a cut above the class norm, and the CX-9 is no exception. It’s easily the best-driving three-row SUV from a non-luxury brand.

The biggest thing that separates the CX-9 from its competitors is ride and handling. Taut suspension tuning results in well-controlled body motions that give the SUV a planted feel in corners. Most three-row SUVs make their considerable bulk known when you toss them into corners, but the CX-9 willingly plays along when you have the urge to drive it like the Miata you owned before you had kids. The ride got a bit bumpy on rough roads, but our tester came with large 20-inch wheels and low-profile tires, a combination that tends to degrade ride comfort. The SUV’s standard 18-inch alloy wheels with taller-sidewall tires likely improves the ride.

The CX-9 is one of a handful of three-row SUVs, like the Atlas and Subaru Ascent, powered by a standard turbocharged four-cylinder engine. The CX-9’s turbo 2.5-liter four-cylinder pairs with a six-speed automatic transmission, and the powertrain has been tuned for driving enjoyment; gas pedal and transmission response are good, and the engine’s low-end torque — 310 pounds-feet available at 2,000 rpm — is there when you need high-speed passing power. The CX-9 includes a Sport mode that heightens drivetrain response by holding lower gears longer before upshifting and increasing gas pedal sensitivity.

The one area where the CX-9’s driving experience falters is its steering; while steering precision is fine, the wheel has a numb feel.

The other thing that distinguishes the CX-9 from the competition is its upscale cabin materials and finishes, which are as nice as what you’ll find in some luxury SUVs. However, this observation comes with an important asterisk: It’s true on the Signature trim level only.

It’s not uncommon to see differences in cabin quality between base and top-of-the-line trim levels, but the gap is wider than normal in the CX-9. Things the Signature trim gets that lower trims don’t include Nappa leather upholstery, Rosewood trim and additional LED accent lighting. Those extra luxury touches don’t come cheap: The all-wheel-drive-only Signature costs $2,725 more than a Grand Touring AWD model.

Besides being finished in upscale leather, the front bucket seats in Grand Touring and higher trim levels are heated and ventilated, and the second-row outboard seats are heated. Comfort is good in both rows; the front buckets are supportive, and the second row has good legroom for adults when the seat is in its rearmost position. The second-row bench seat also reclines (second-row captain’s chairs aren’t offered).

It’s a good thing the second-row bench slides forward and backward, because third-row passengers are going to be hollerin’ for more legroom — there’s very little to spare with the second row slid all the way back. Second-row passengers won’t be able to help with third-row headroom, however, which is severely restricted by the CX-9’s sloping roofline. Outward visibility back there is also limited due to small rear-quarter windows, resulting in a third row that some might find claustrophobic. Unlike the third-row seats in the Atlas and Chevrolet Traverse, the CX-9’s isn’t made to carry adults.

Our test vehicle was packed with tech features, some better executed than others. One that’s done well is the available head-up display, which includes speed limit info as well as graphical indicators for the available lane departure and standard blind spot warning systems. However, the blind spot warning indicators are harder to see at a glance than the ones Kia and Genesis incorporate into their HUDs.

There’s also an available 360-degree camera system that gives a bird’s-eye view of your surroundings as well as forward and rear views. The extra visibility is welcome, but the system’s pixelated front and rear image quality is disappointing considering other models’ crisp, HD-quality images.

This screen lockout makes using the CX-9’s newly available smartphone connectivity more difficult than it needs to be. CarPlay’s familiar icon-based interface appeared on the dashboard touchscreen when my iPhone was connected to the CX-9, and it responds to touches and swipes — when you’re stationary. When you’re moving, you must use the knob controller to navigate the system, which isn’t ideal for a touchscreen-optimized interface like CarPlay. The knob controller is relatively easy to use, but Mazda’s decision to disable the touchscreen is frustrating.

Grand Touring and higher trims have a 7-inch instrument panel screen in the center of the instrument panel, but it doesn’t add much. The screen’s speedometer, for one, is just a digital representation of a traditional analog speedometer. Mazda didn’t take advantage of the design freedom a screen affords. However, I do like how Mazda has integrated a following-distance indicator in the center of the screen to alert you when you’re too close to the car ahead of you. The warning is also shown in the head-up display.

The CX-9 has one of the smallest cargo areas among three-row SUVs, with 14.4 cubic feet of cargo room behind the third row and a maximum of 71.2 cubic feet with the second and third rows folded. Useful features include third-row head restraints that automatically lower when folding the seat and a shallow hidden storage bin under the cargo floor.

The CX-9 received the highest score in all Insurance Institute for Highway Safety crash tests, as well as IIHS’ highest rating for front crash prevention (when equipped with the optional Smart Brake Support automatic emergency braking). The Touring trim had the best-performing headlights in IIHS tests, with an Acceptable rating; the base Sport model’s headlights were rated Marginal, while the high-end Grand Touring and Signature’s lights were deemed Poor.

Other available active-safety features include lane keep assist and adaptive cruise control that works down to a stop.

We last compared the CX-9 against the three-row SUV competition in 2016, when the current generation of the SUV was brand new. It finished fourth in a field of eight SUVs and was just as much of an outlier then as it is today, with its focus on driving performance and style at the expense of passenger and cargo room. The field has only gotten stronger with the arrival of models such as the Atlas and Telluride — both of which are worth a test drive — but if you can live with the CX-9’s shortcomings, there’s nothing else in the class that drives like it. 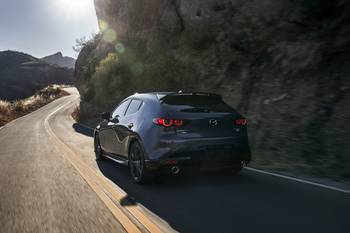 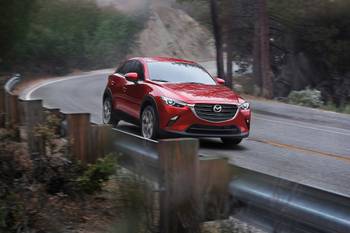 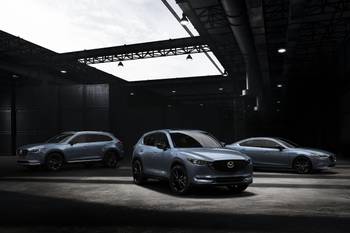