Just before Ford unveiled the new Bronco this summer, Jeep revealed the Wrangler Rubicon 392 Concept, a Wrangler concept powered by a 450-horsepower, 6.4-liter V-8. It felt like a bit of a stunt to steal some of Ford’s shine. But, uh, it’s happening. For real. Jeep is actually shoehorning a 6.4-liter V-8 under the hood of the Wrangler Rubicon in response to what it claims is customer demand.

Besides dropping the “Concept” part of its name, the production Wrangler Rubicon 392 has one more key difference from its concept predecessor: the production Jeep has 470 horsepower and 470 pounds-feet of torque.

Yes, you read that right; the production version has more power than the concept. Twenty additional ponies and 20 more pounds-feet, to be exact. The Wrangler Rubicon 392, only available as a four-door Wrangler, will also have a number of specific exterior and interior styling cues to let you know this is the one with the big engine, just in case you can’t hear the V-8 rumble.

In creating the Wrangler Rubicon 392, Jeep took it to the usual off-road haunts to make sure it was up to the standards of its name — including the Rubicon trail, of course — and one new testing location: a drag strip. There, Jeep says it put down a 0-60-mph time of 4.5 seconds on its way to a 13-second quarter-mile sprint, though it will still retain its limited top speed of 99 mph.

Power goes to the wheels via a specially tuned eight-speed automatic transmission designed for the engine’s higher torque figure. In a Wrangler first, the transmission has steering-wheel-mounted aluminum shift paddles. There’s no manual option, either, so it’s the eight-speed auto or a different Wrangler. Upgraded brakes help slow the quick SUV down, and to reduce fuel consumption, the engine uses cylinder deactivation. A two-stage exhaust system has normal and sport modes.

A functional hood scoop provides the engine cold air. We’ll get to the rest of its off-road capabilities in a minute, but if you’re worried about the scoop affecting the Rubicon 392’s off-roading chops, or of losing power if the scoop ends up blocked, Jeep thought of that: It has a special Hydro-Guide intake capable of carrying away up to 15 gallons of water per minute. If the scoop does get blocked by mud, snow or debris, a secondary air pathway will let the Rubicon 392 reach top speed.

This isn’t a street-truck version of the Wrangler. The Wrangler Rubicon 392 is lifted 2 inches (it sits an inch taller than the regular Rubicon, according to Jeep) and has an upgraded frame and engine mounts, retuned suspension, upgraded Dana 44 axles and more. The only axle ratio available is 3.73:1 — the regular Rubicon has a 4.10:1 — but Jeep says that the added torque of the big V-8 makes up for it.

The extra lift also gives the Wrangler Rubicon 392 the capability to ford 32.5 inches of water, plus improved approach and departure angles of 44.5 and 37.5 degrees, respectively (a regular four-door Rubicon’s angles are 43.9 and 37 degrees). Breakover angles remain unchanged at 22.6 degrees. Ground clearance, however, is down half an inch from the V-6 Rubicon, at a still-impressive 10.3 inches.

Standard 33-inch tires wrap around 17-inch beadlock-capable wheels. Specially tuned monotube aluminum Fox shock absorbers help handle the rough stuff on- and off-road, with electronic locking differentials and an electronic sway-bar disconnect for when things get really tough. Jeep’s Selec-Speed Control keeps things moving at 1 to 5 mph when in the transfer case’s 4-Low mode — and you can control the speed with the new shift paddles — and the Wrangler’s Off-Road Pages help you monitor all kinds of important data, including pitch, roll, altitude and more.

Looks the Part, Inside and Out

Besides the lift and the hood scoop, quad tailpipes and special 392 insignia will help onlookers identify the Wrangler Rubicon 392. Bronze wheels, badge accents and front and rear tow hooks also differentiate the 392 from other Rubicon models.

Unique front seats with extra upper bolstering and a flat-bottomed sport steering wheel help set the 392’s interior apart. So does bronze stitching on the leather upholstery, with a bronze “Rubicon 392” embroidered into the upper portion of the front seats.

Besides the leather upholstery, other features standard on the Rubicon 392 that are usually optional on other Wranglers include a body-colored hardtop and fenders, a steel bumper, the Wrangler’s Safety Group, Advanced Safety Group and Cold Weather Group.

If the standard features aren’t enough, Jeep is already planning on offering all sorts of accessories through its Mopar division.

Official pricing will come closer to the Wrangler Rubicon 392’s on-sale date sometime in the first quarter of 2021, but expect it to cost quite a bit. A V-6 Rubicon can be optioned over $60,000 with ease, and with the more powerful engine, the upgrades to accommodate that engine and the inclusion of numerous pricey options as standard equipment, it wouldn’t be surprising to see the Wrangler Rubicon 392 carry a starting price of $65,000 or even closer to $70,000. 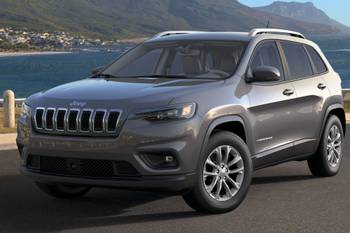