The verdict: Families looking for a large vehicle with small-vehicle fuel economy don’t have a lot of options, but the 2021 Kia Sorento Hybrid is a good one. The electrified three-row SUV complements the already impressive Sorento lineup by adding a decent bump in the gas mileage department.

Against the competition: The Sorento Hybrid has few direct competitors, but its closest one is the Toyota Highlander Hybrid. The Highlander is a bit bigger, but the Kia is less expensive and has better fuel economy.

Redesigned for 2021, the Kia Sorento three-row SUV slots just below the Telluride three-row SUV in Kia’s lineup. Compared with the 2020, the Sorento is bigger this year and has an updated multimedia system, a nicer cabin, an available hybrid powertrain, more standard safety features and a rugged off-road version.

This review focuses mostly on the front-wheel-drive hybrid model; you can read my review of the gas-only Sorento below. 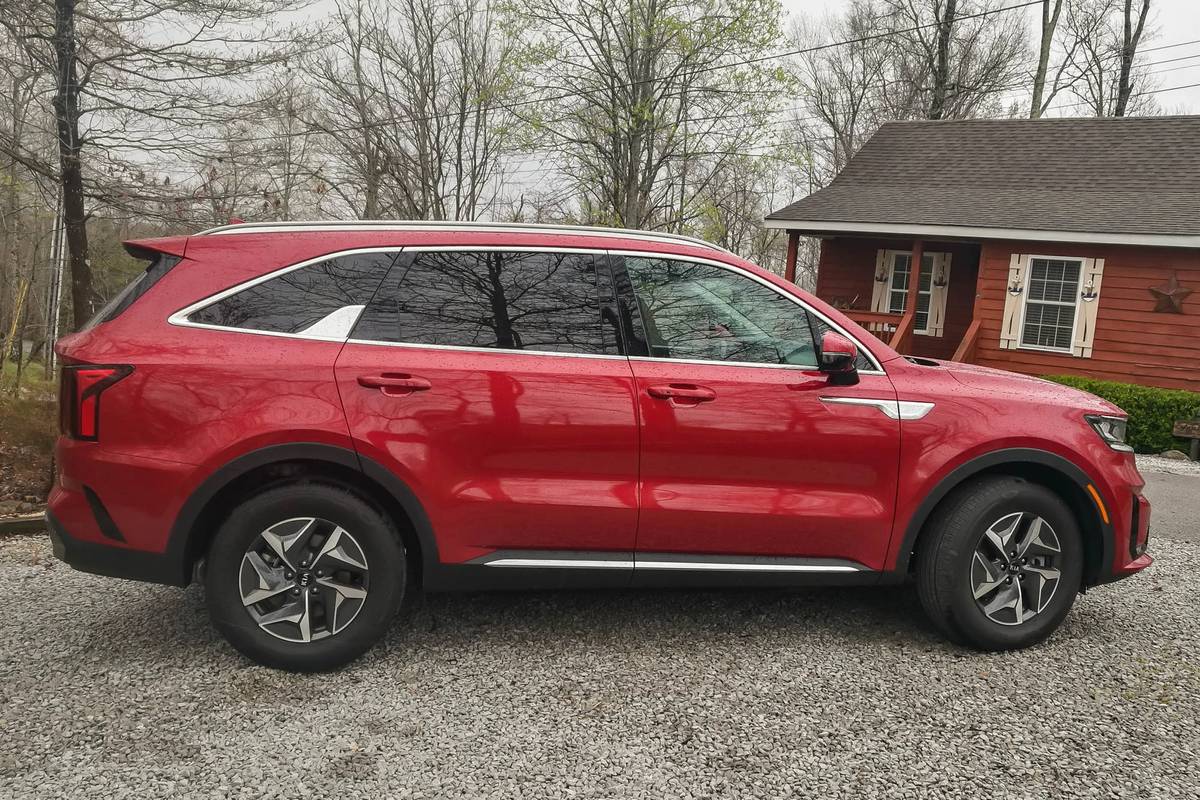 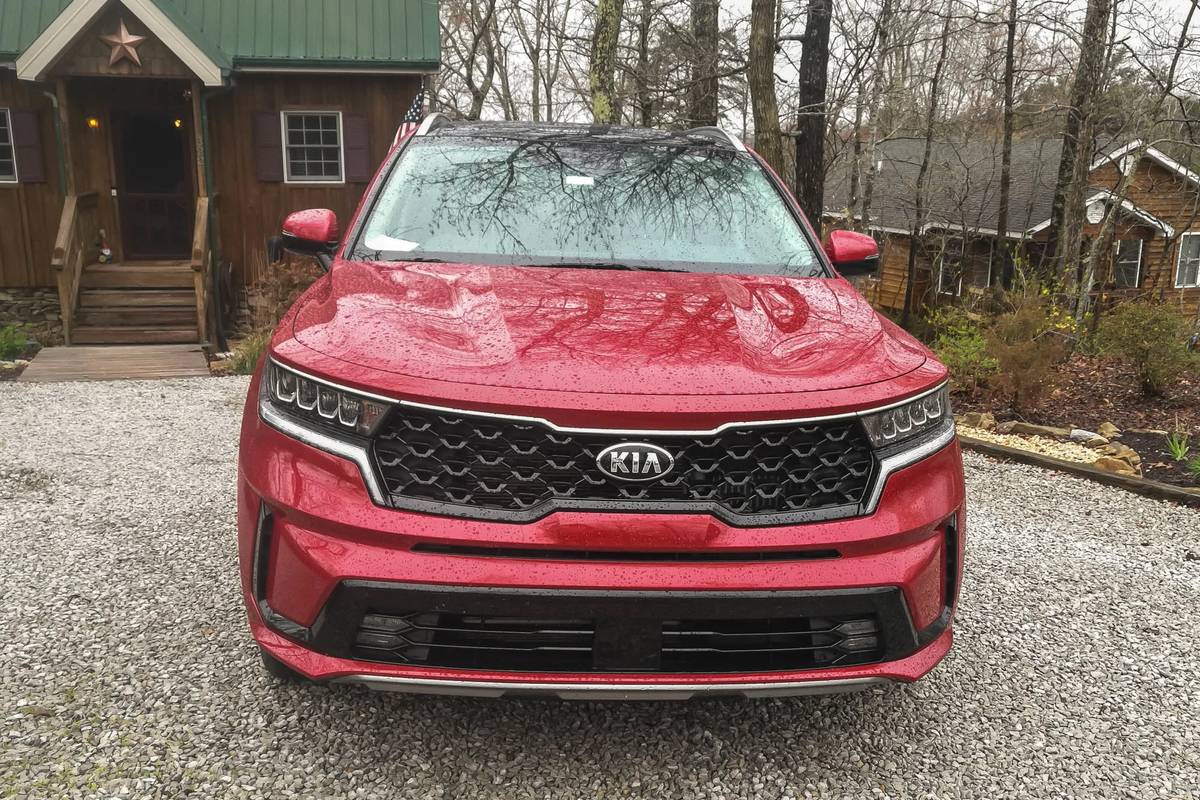 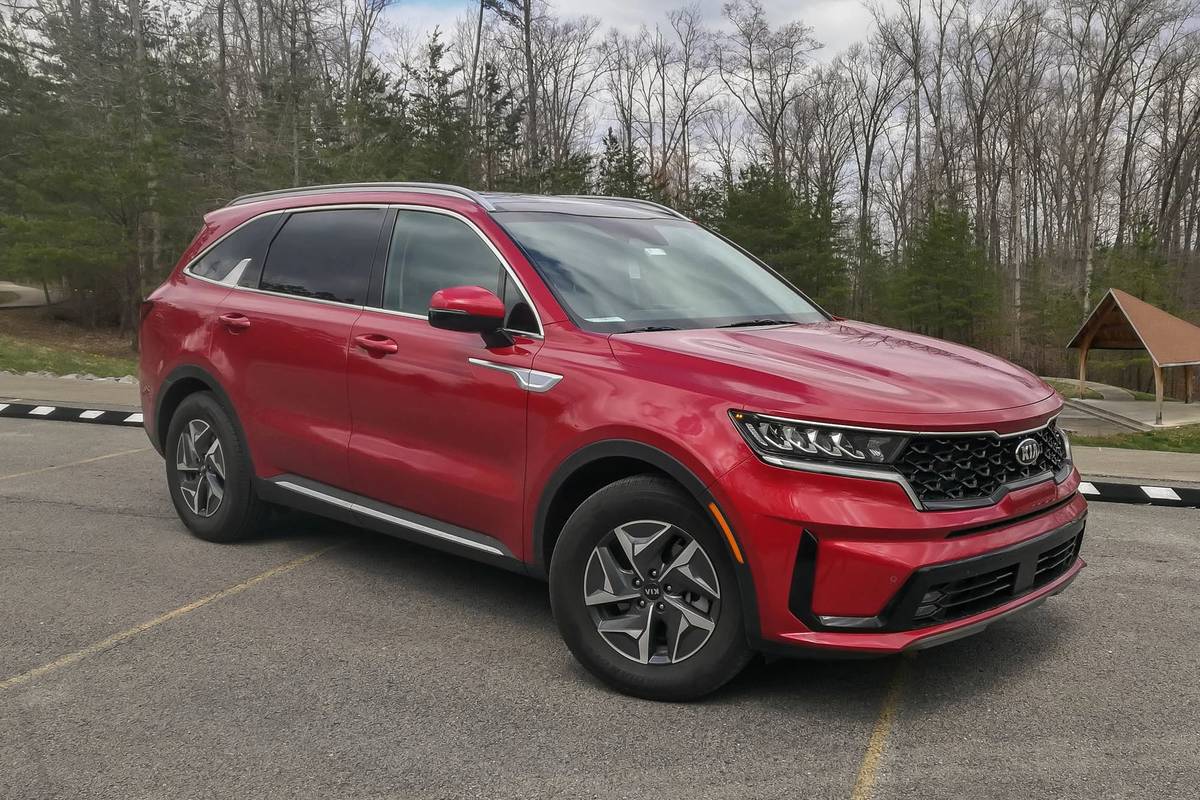 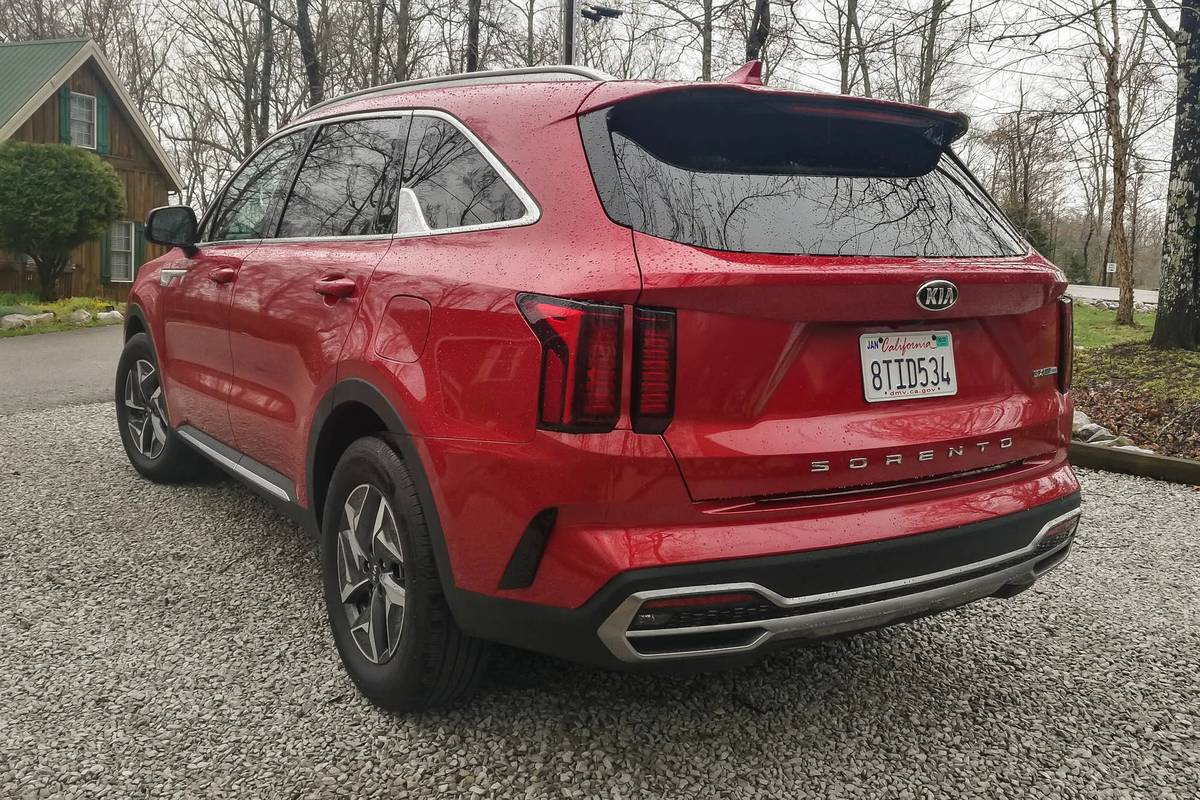 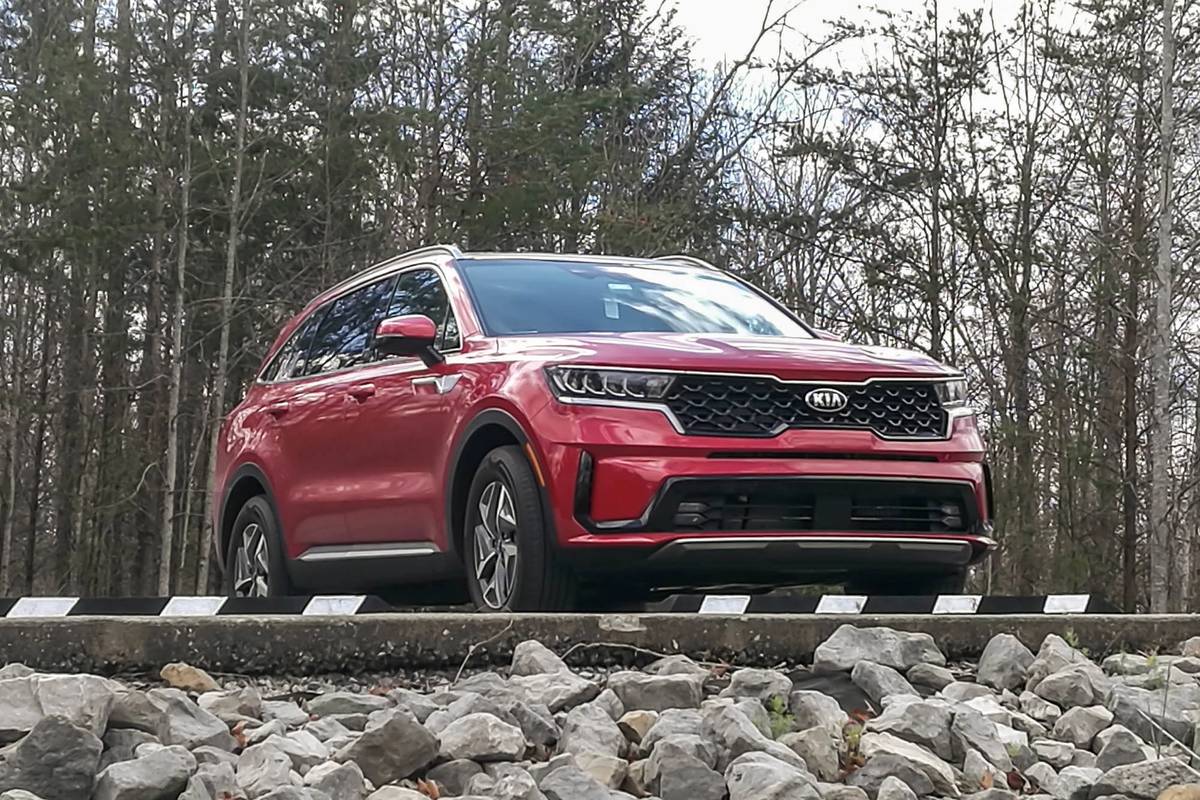 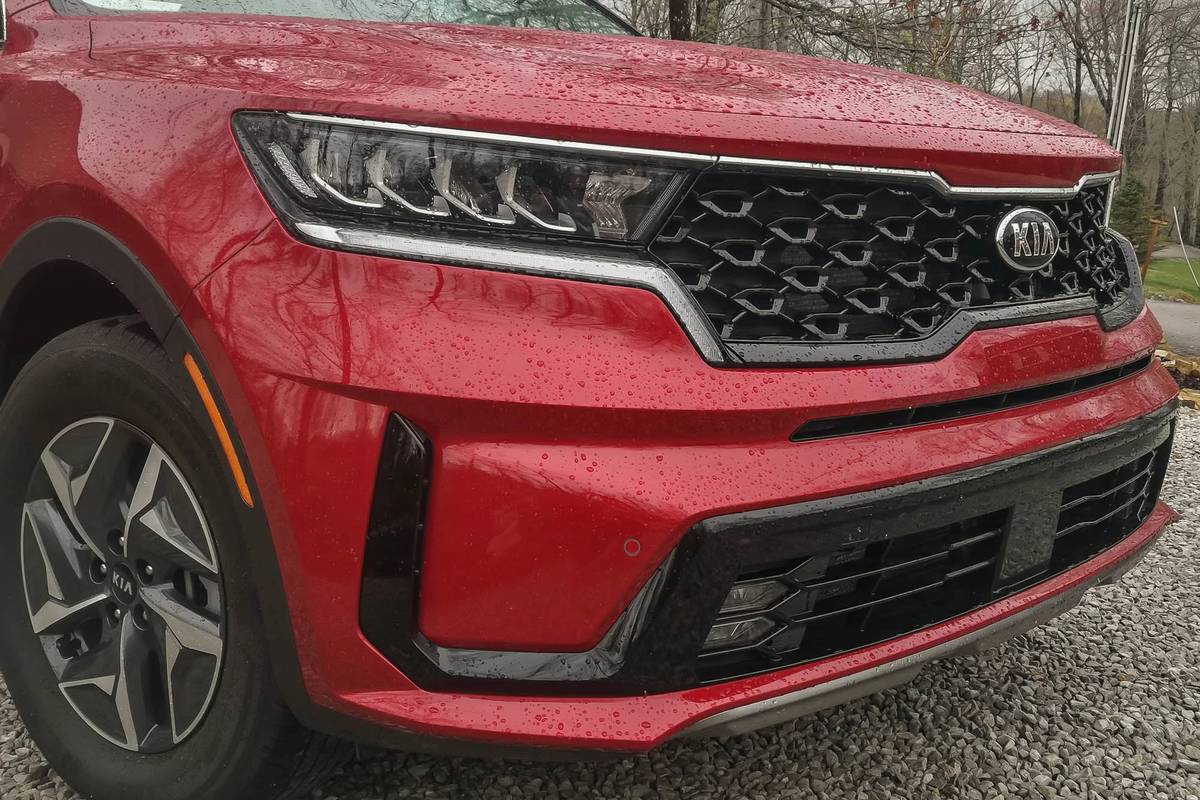 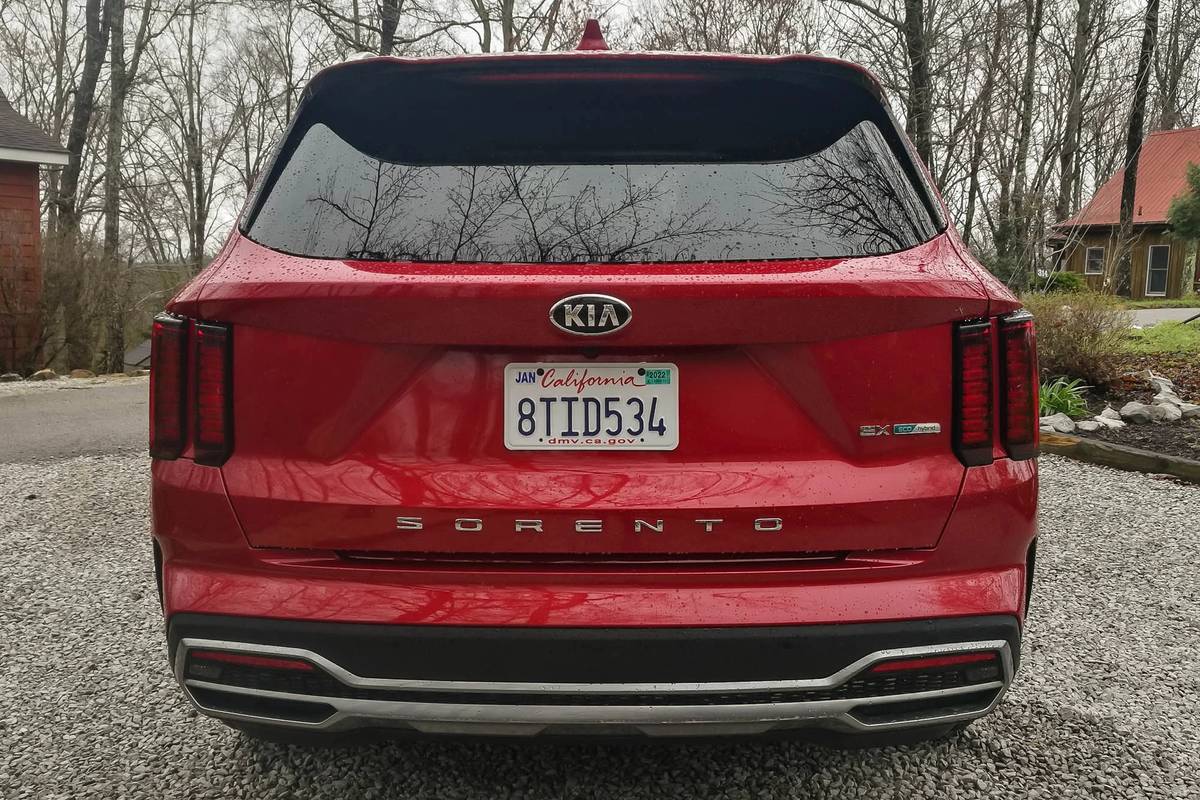 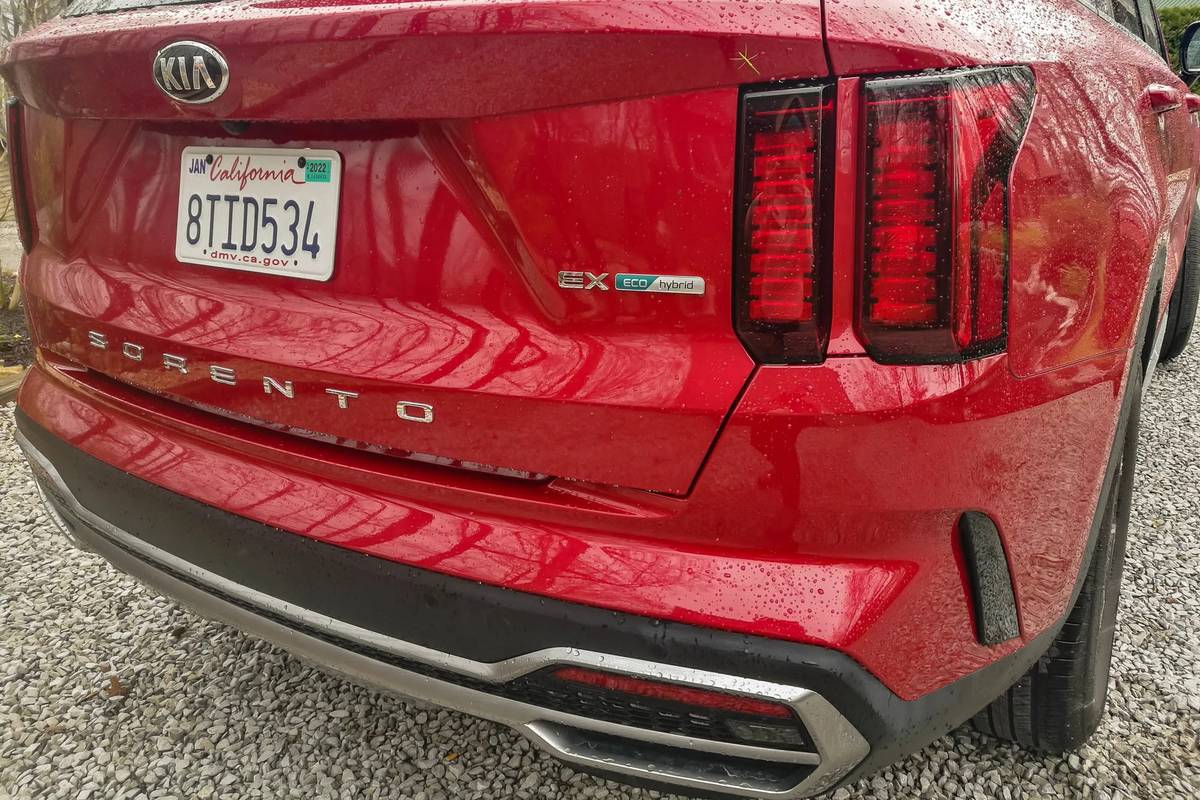 The Sorento Hybrid uses a turbocharged 1.6-liter four-cylinder engine, a 44-kilowatt electric motor and a 1.5-kilowatt-hour battery for a total system output of 227 horsepower, which is plenty powerful. Torque is strong from a stop, and the six-speed automatic quickly ticks off shifts, making for fuss-free power delivery at higher speeds.

The hybrid sometimes makes odd, ethereal whirring sounds, as do many hybrids on the market, but Kia has done a solid job smoothing out other telltale hybrid quirks in two areas: regenerative braking and the transition from electric vehicle power to gas.

The Sorento’s brakes have a fairly natural pedal feel and linear action, both of which are very unlike some hybrids’ firm, unresponsive pedals. There’s no EV mode to force electric-only operation, but the electric motor kicks in frequently — both to boost power and to drive the car on electric power alone — to increase efficiency. The switch to electric-only power happens seamlessly; the only clue is a green EV indicator light.

In practice, the Sorento’s estimated fuel economy was a bit difficult to achieve. I averaged 34.7 mpg during a 1,309-mile road trip — a bit under its overall rating. A few things were working against it, however. The SUV was loaded with five people and a week’s worth of stuff, and the trip consisted almost exclusively of highway driving, which prevented the powertrain from capturing the lost braking energy needed to recharge the battery and augment engine power. Our 34.7-mpg average was, in fact, pretty close to the SUV’s highway estimate.

As you’d expect, the hybrid’s fuel economy is a lot better than the regular Sorento’s. The conventional Sorento uses a 191-hp, 2.5-liter four-cylinder engine and an uplevel 281-hp, turbocharged 2.5-liter four-cylinder; the previous V-6 is no longer available. With the base engine and FWD, the conventional Sorento gets an EPA-estimated 24/29/26 mpg, while the uplevel front-drive turbo version is rated at 22/29/25 mpg.

And even better fuel economy is coming. A plug-in hybrid Sorento with 261 hp, AWD and an estimated 30 miles of all-electric range will join the lineup later in 2021.

What You Give Up 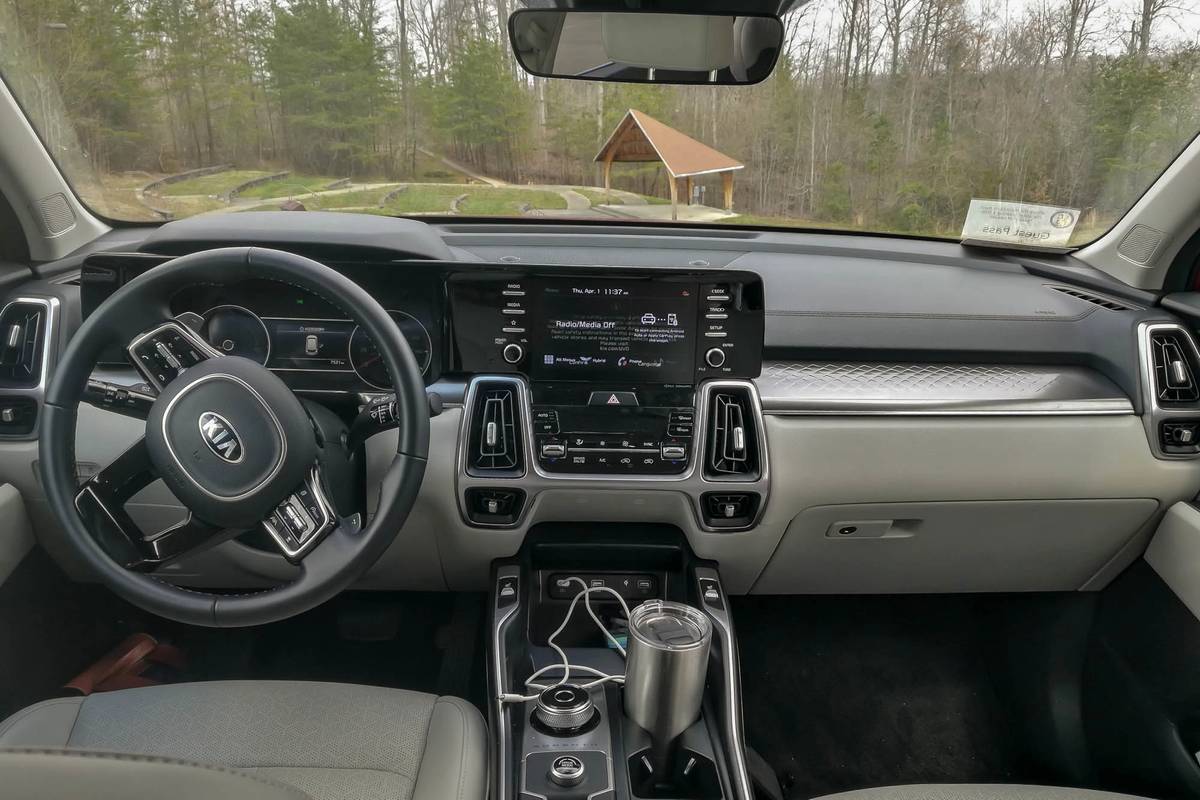 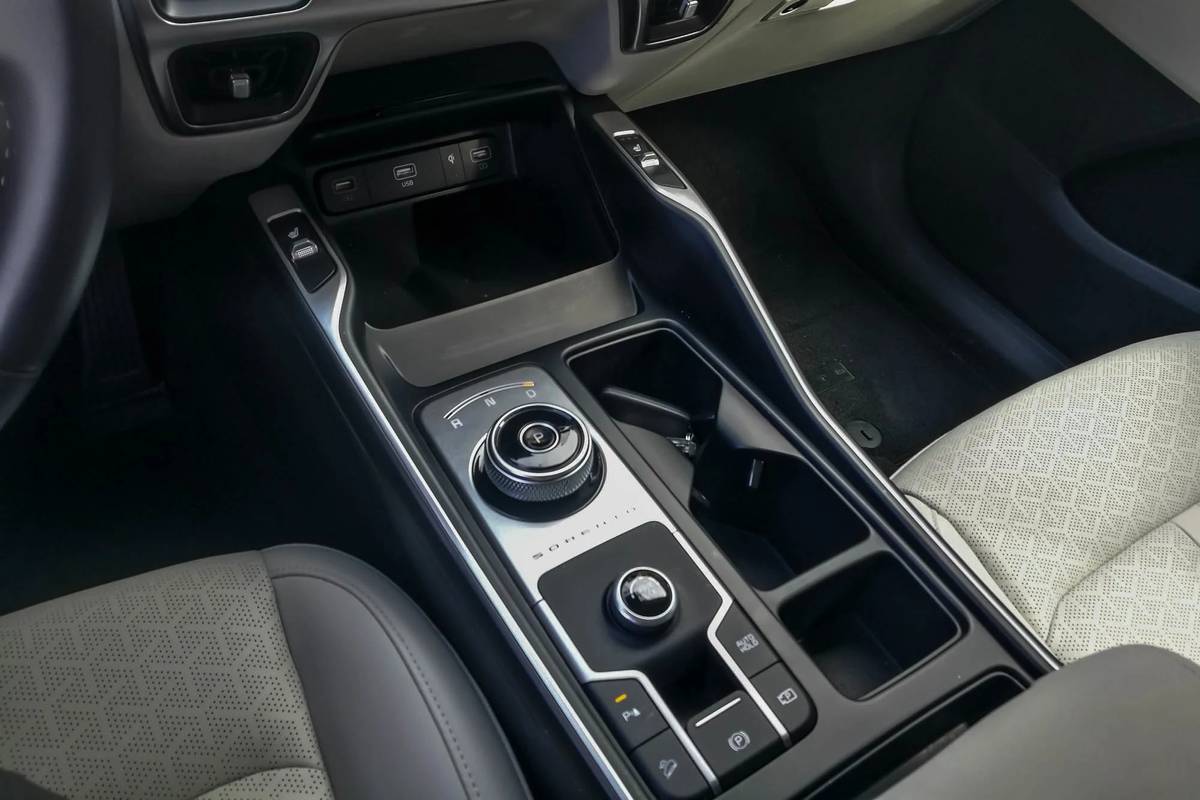 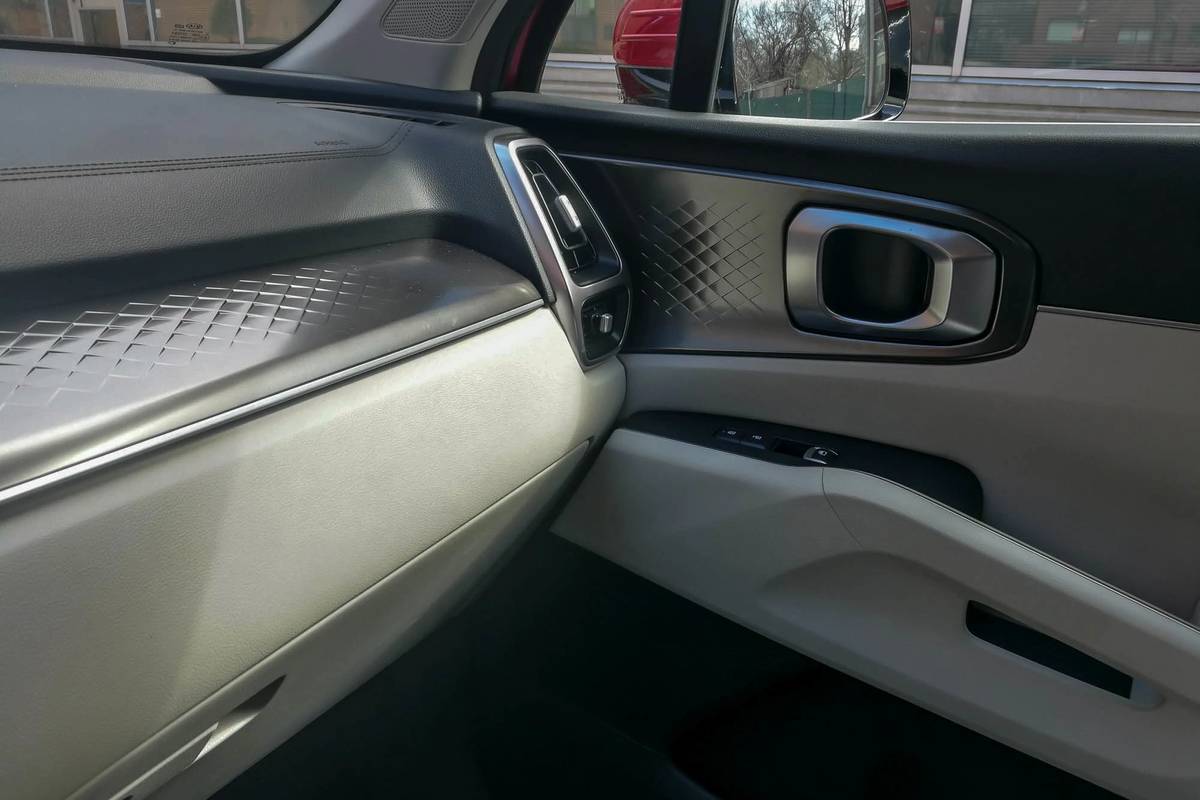 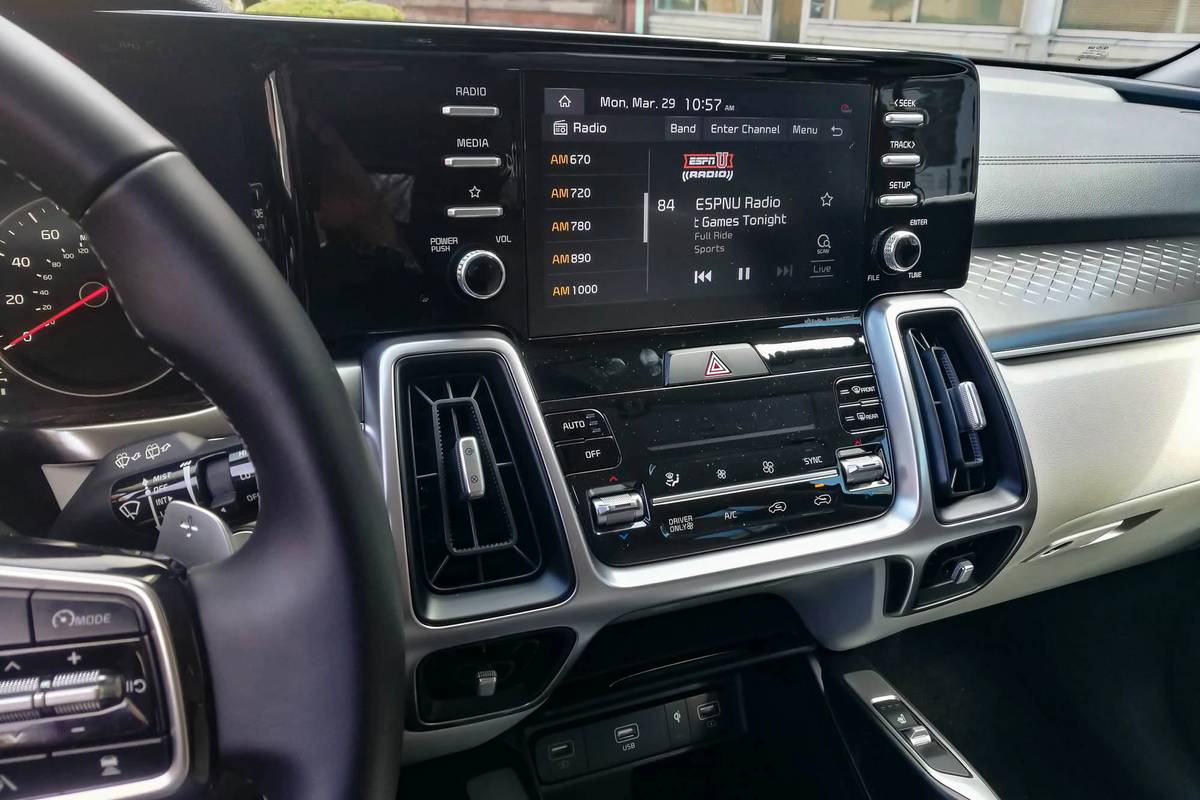 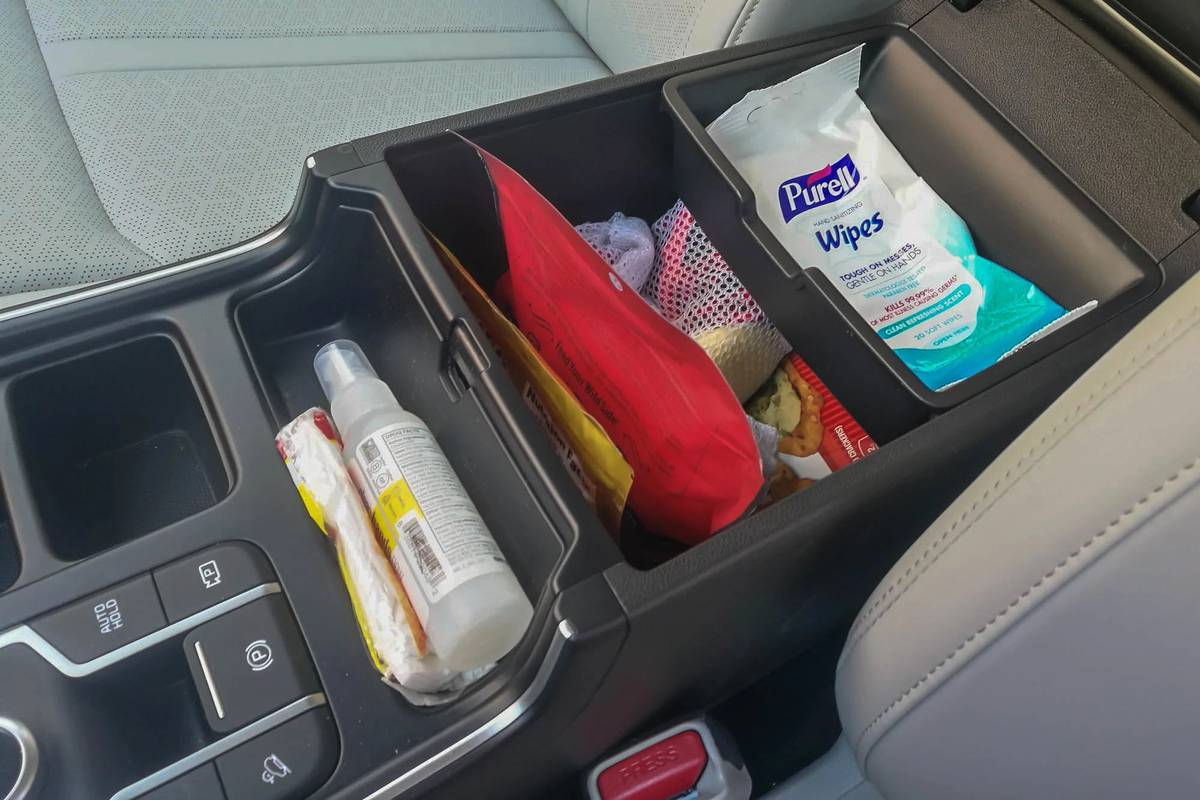 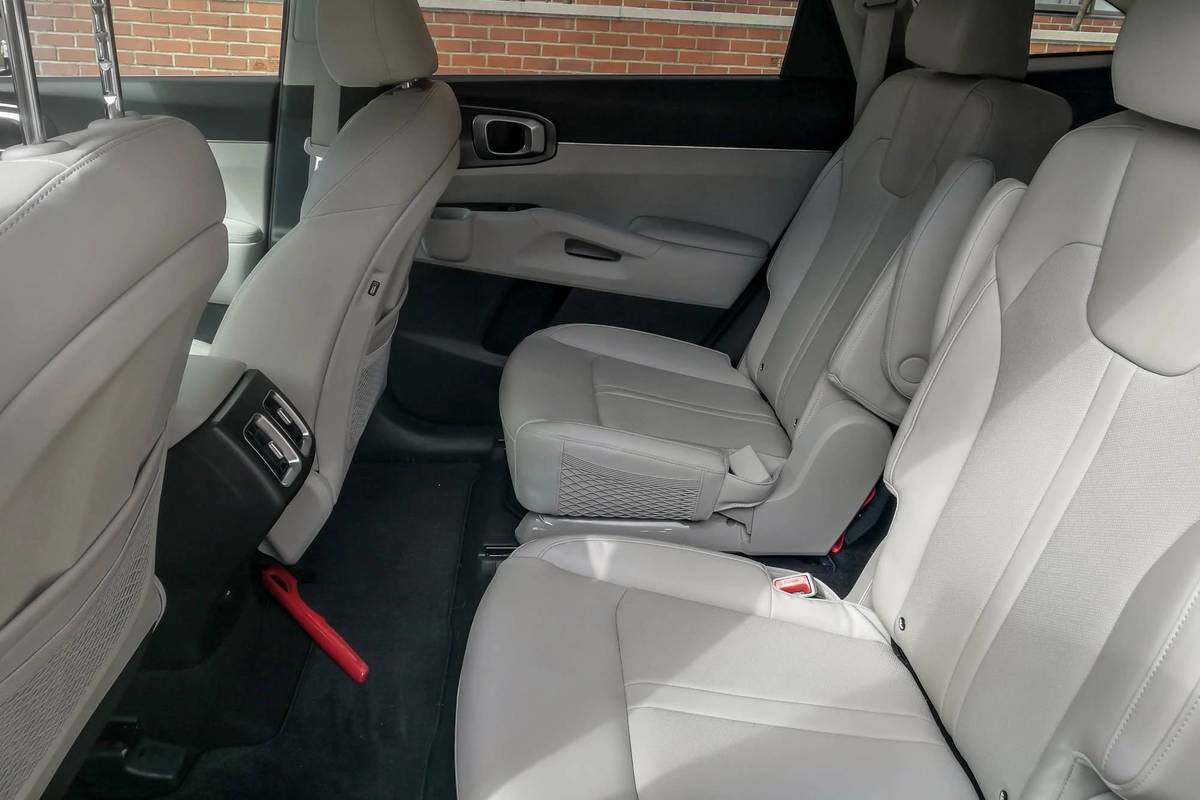 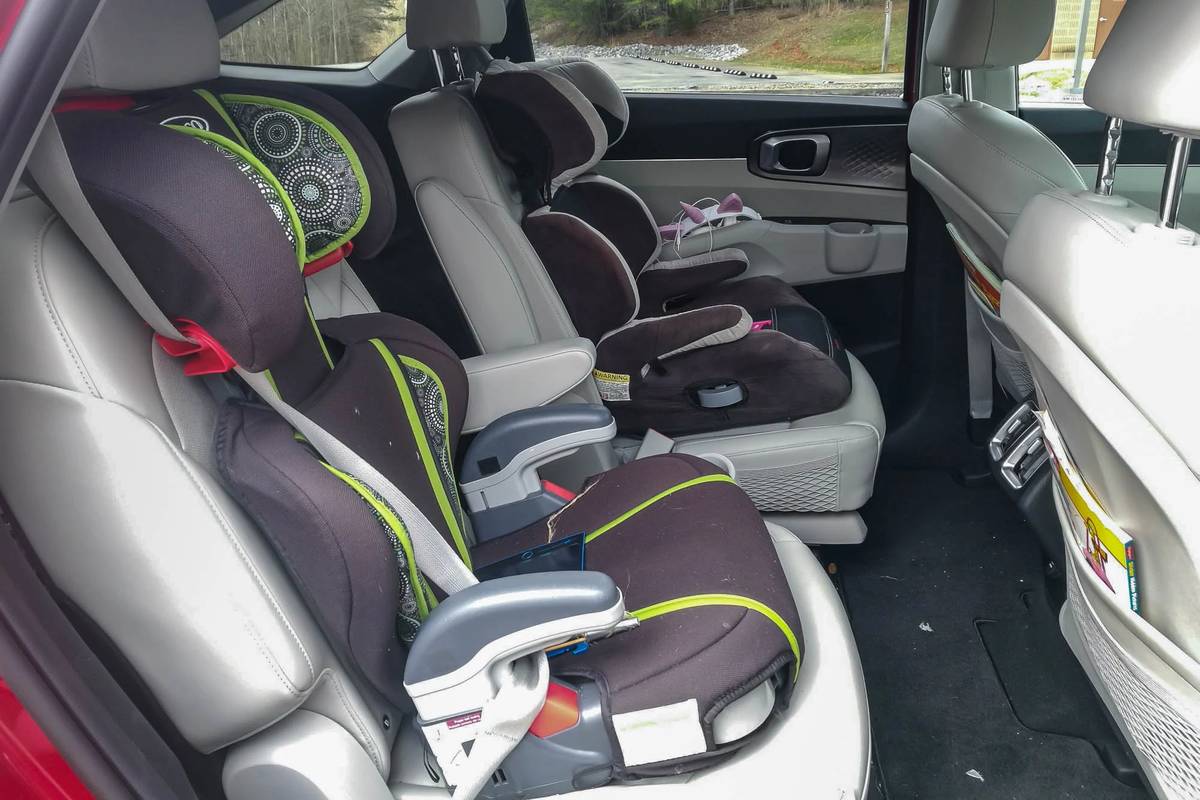 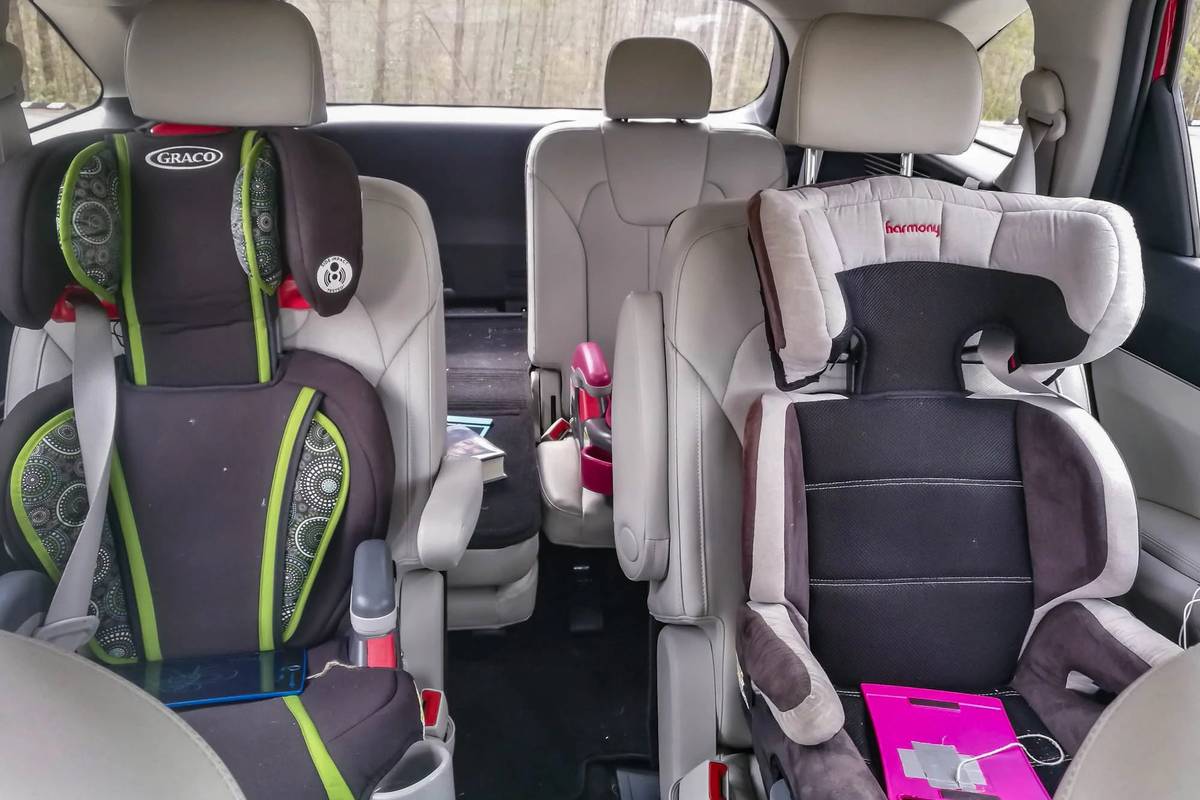 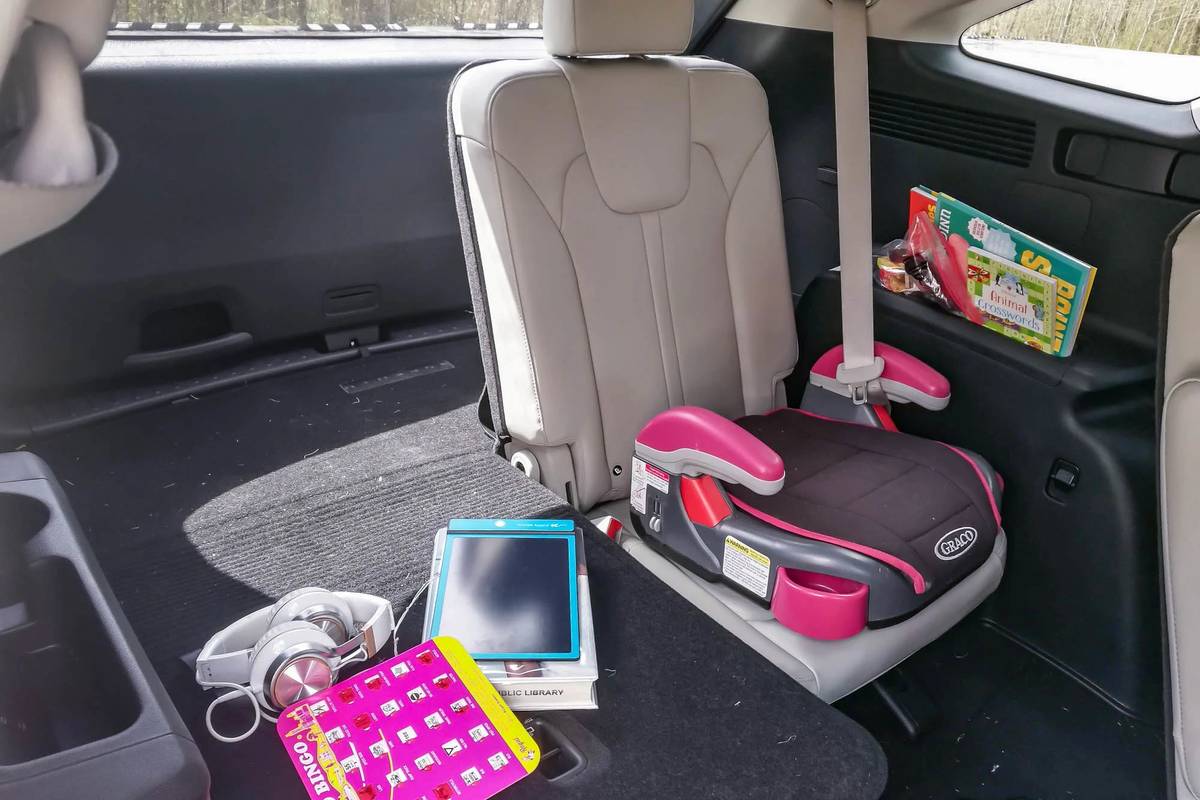 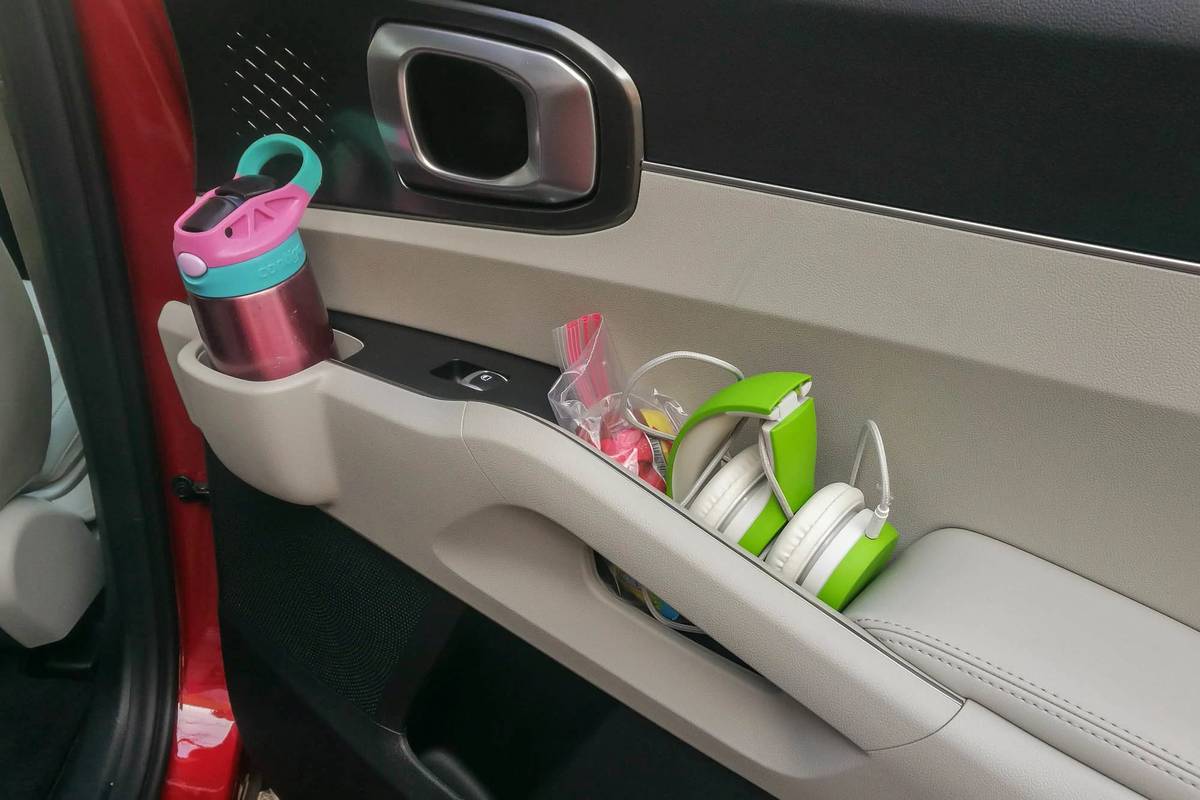 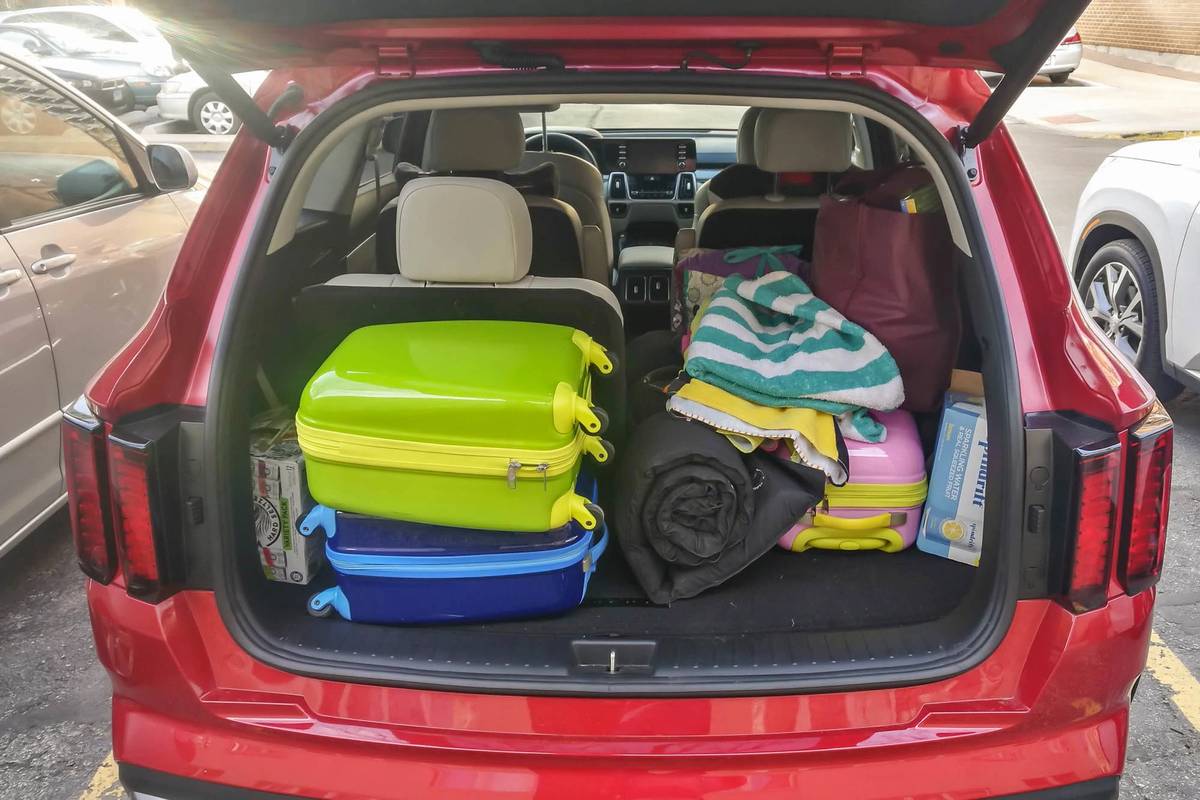 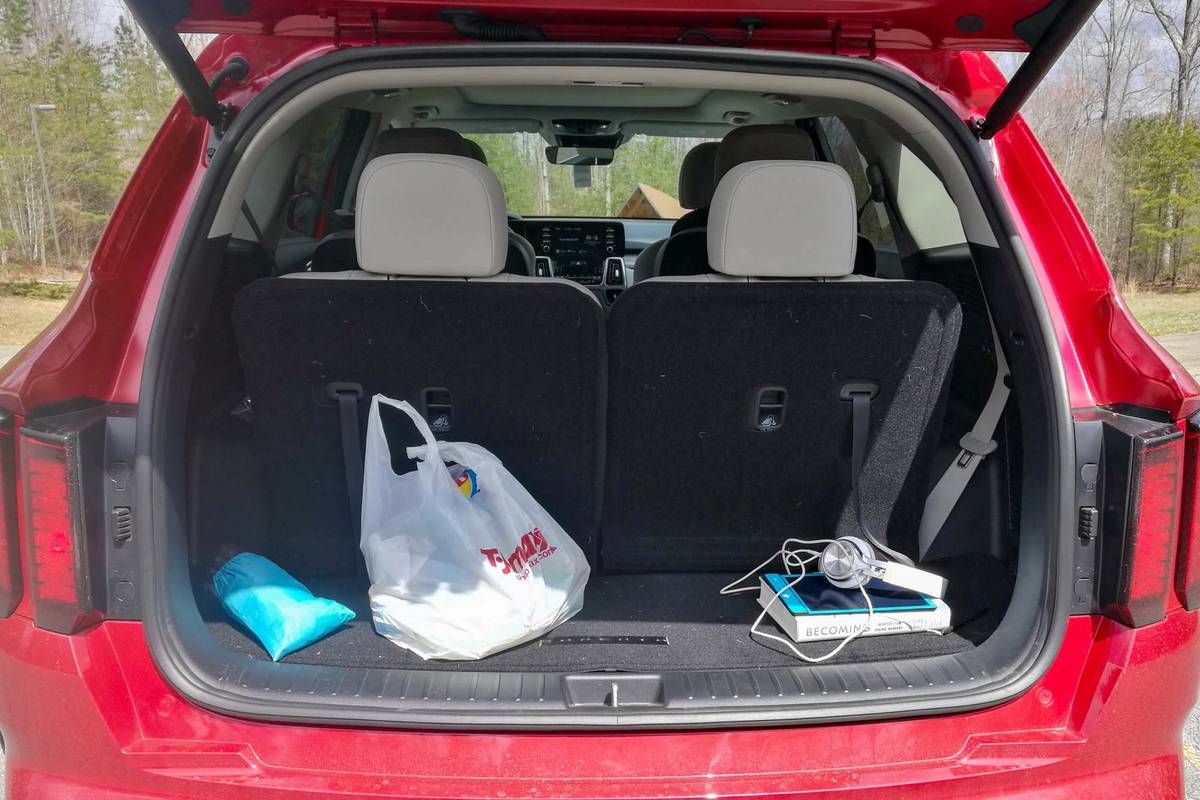 We didn’t tow anything on our trip, but if you need to, you’ll have to pack sparingly. The Sorento Hybrid is only rated to tow 2,000 pounds, which is less than the gas model’s 3,500-pound max rating (with the optional engine). It’s also lower than the Highlander Hybrid’s 3,500-pound rating.

It took a few miles to settle into the Sorento Hybrid’s road manners. It has a firmer ride and lets in more road noise than the regular version; its hybrid-specific tires are likely partly to blame. In many other ways, however, the Sorento Hybrid benefits from the successes of the regular Sorento, especially when it comes to space and cabin features — with a couple of exceptions.

The Sorento Hybrid has the same amount of cargo space behind the third row as the gas-powered version, at 12.6 cubic feet, according to Kia; that’s less than the Highlander Hybrid’s 16-cubic-foot rating. When it comes to rear headroom, the Sorento models are once again matched — and once again slightly trail the Highlander. In rear legroom, the Sorento Hybrid offers an inch less legroom than the gas model, but it wasn’t noticeable to me or my backseat crew.

What disappoints in terms of space, however, is that the hybrid model is only offered with second-row captain’s chairs; no three-seat bench is available as it is in the gas-only version. This omission limits the SUV’s versatility.

Also limiting is the fact that the hybrid only comes in mid-level S and EX trims — which you’ll recognize the minute you hop in the cabin. When I tested a top SX-Prestige trim of the gas-only Sorento, I was wowed by its refined materials and classy design. The hybrid is not that. The Sorento Hybrid EX I tested had more of a budget feel, with copious plastic pieces and a less sophisticated design.

Also missing from the hybrid is the uplevel versions’ large 10.25-inch touchscreen, which is slick-looking and easy to use. The Sorento Hybrid only has an 8-inch touchscreen. It’s also straightforward and responsive, but I prefer the larger setup.

As with the gas-powered version, the 2021 Kia Sorento Hybrid is loaded with standard safety features, many of which you’d expect and a couple you might not. Typical safety features include automatic emergency braking with pedestrian detection, blind spot collision avoidance assist, rear cross-traffic alert, a driver attention warning system, lane keep assist and automatic lane-centering. Adaptive cruise control with stop-and-go is only standard on EX models.

Unexpected standard features include a safe exit assistance system for the rear seats, which uses the SUV’s rear-facing radar to detect oncoming traffic and prevent a rear door from being opened if an approaching vehicle or bicycle is detected. There’s also a standard rear-seat alert system that uses ultrasonic sensors to detect child or pet movement in the second and third rows after the doors have been locked; if movement is detected, the system sounds the horn and illuminates the hazard lights.

The Sorento Hybrid isn’t perfect, but if you’re looking for a three-row SUV with thrifty gas mileage, the sacrifices compared with the regular model are small in exchange for big fuel-economy gains.