CARS.COM — As a general rule, Tesla’s vehicles come with technological innovations — and though the Tesla company’s Model 3 is the most affordable car in the vehicles maker’s lineup (which includes the Model S and the Model X), it too comes with its own set of unique technology features.

Most of the buzz around the Tesla Model 3 has come from its screen, a horizontally mounted 15-inch touchscreen that serves as the only display in the entire vehicle. Beyond that, Tesla has also eliminated dashboard controls from the car, save two thumbwheels on the steering wheel and a couple of stalks on the steering column — one of which serves as a gear shifter as well as an activation point for the Autopilot features.

Making the screen the only interaction point for Tesla’s vehicle puts an added emphasis on it. It has to be good or the rest of the car will fall flat. Tesla has already indicated that this will be it for the Model 3: There won’t be an option for a head-up display in this Tesla, and part of the reason the automaker went with this design is to future-proof it in an autonomous world. If the car is driving itself without human intervention, it makes sense to have everything placed in the center of the vehicle’s cabin for all occupants to enjoy.

But in this still-human-centric present, we took a closer look at the Model 3’s screen to see if it’s up to snuff and discovered five important things: 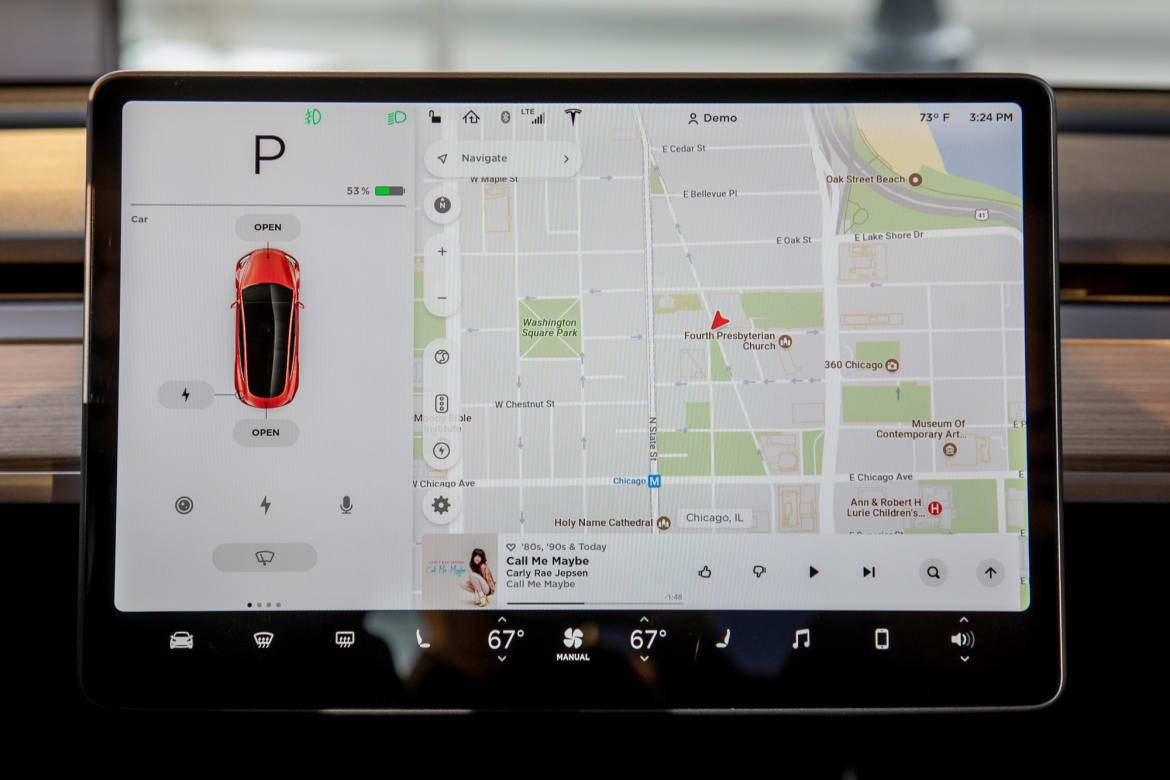 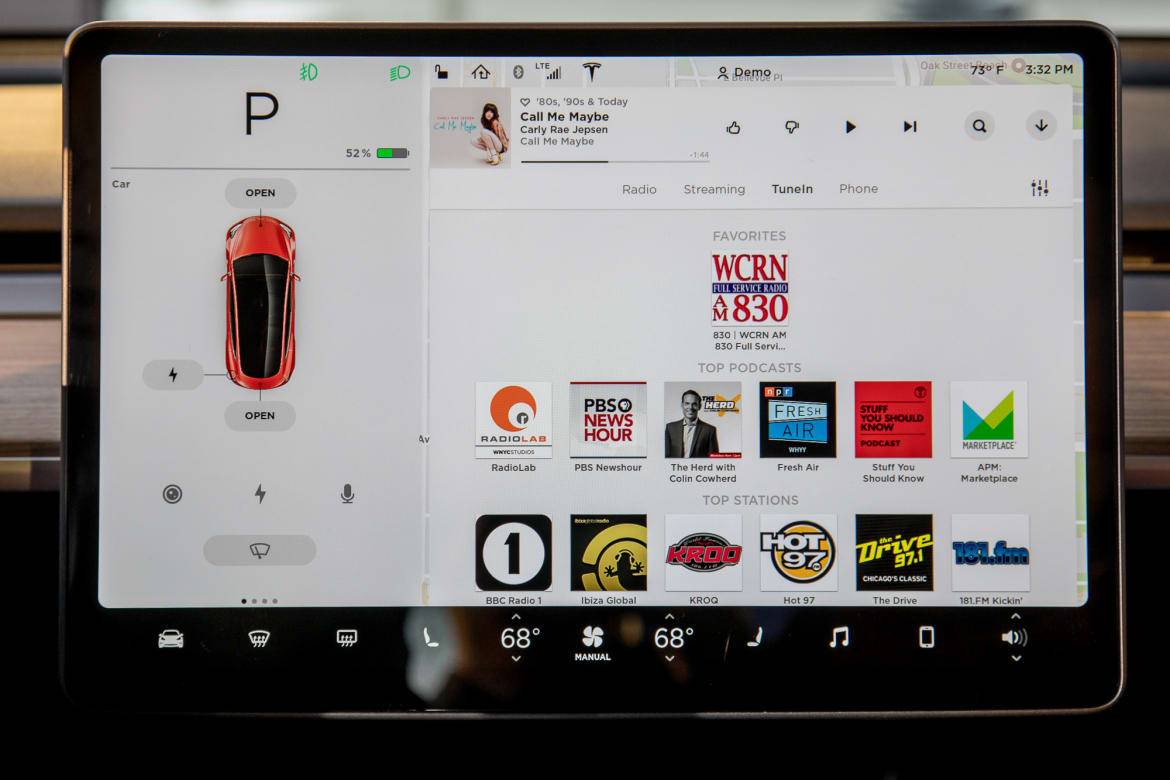 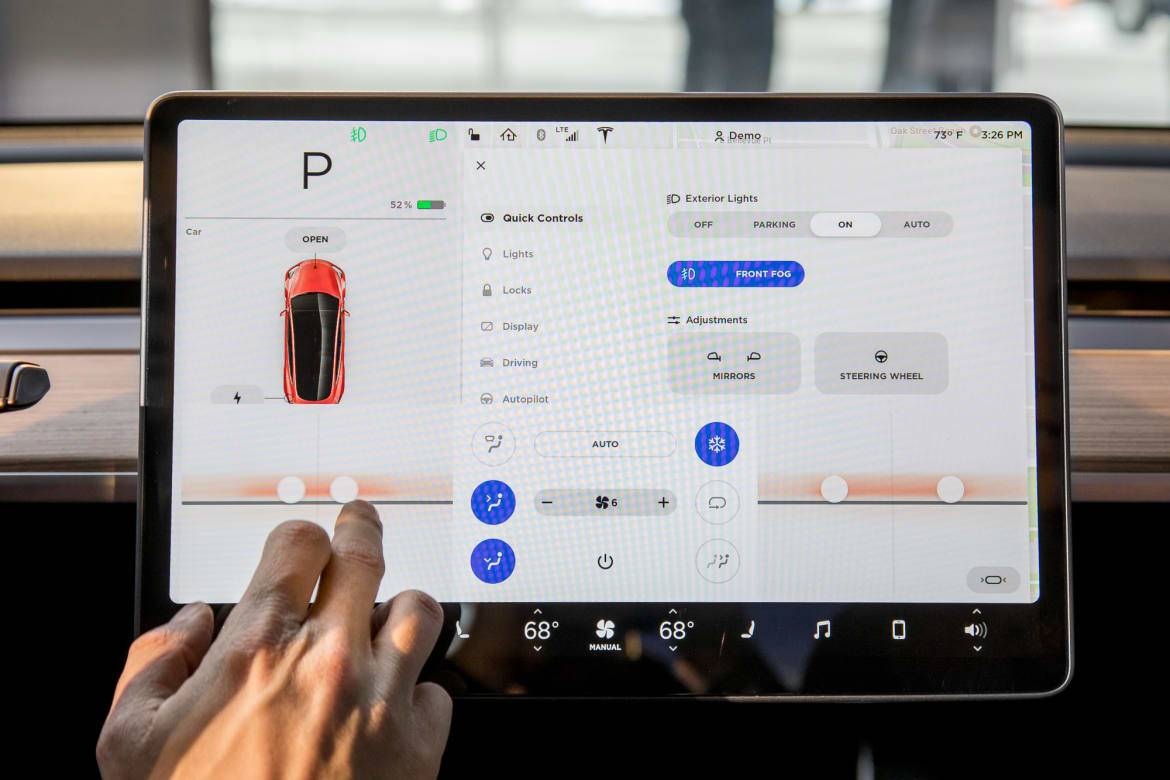 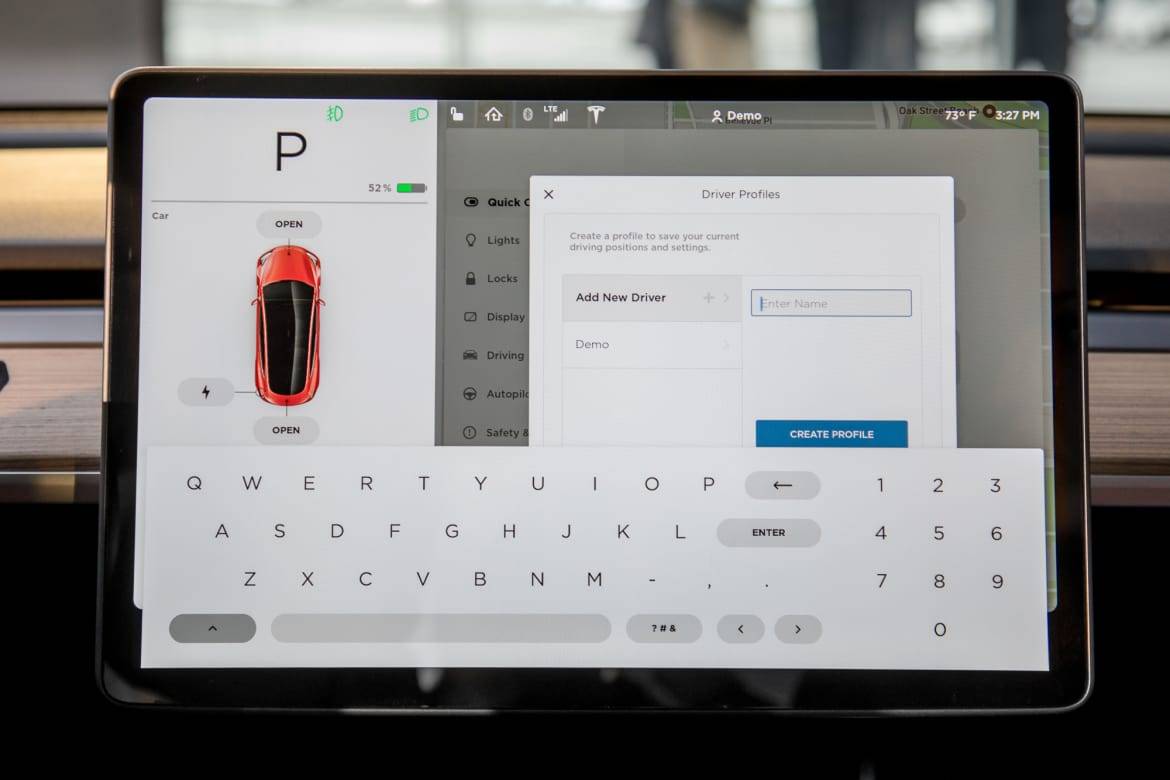 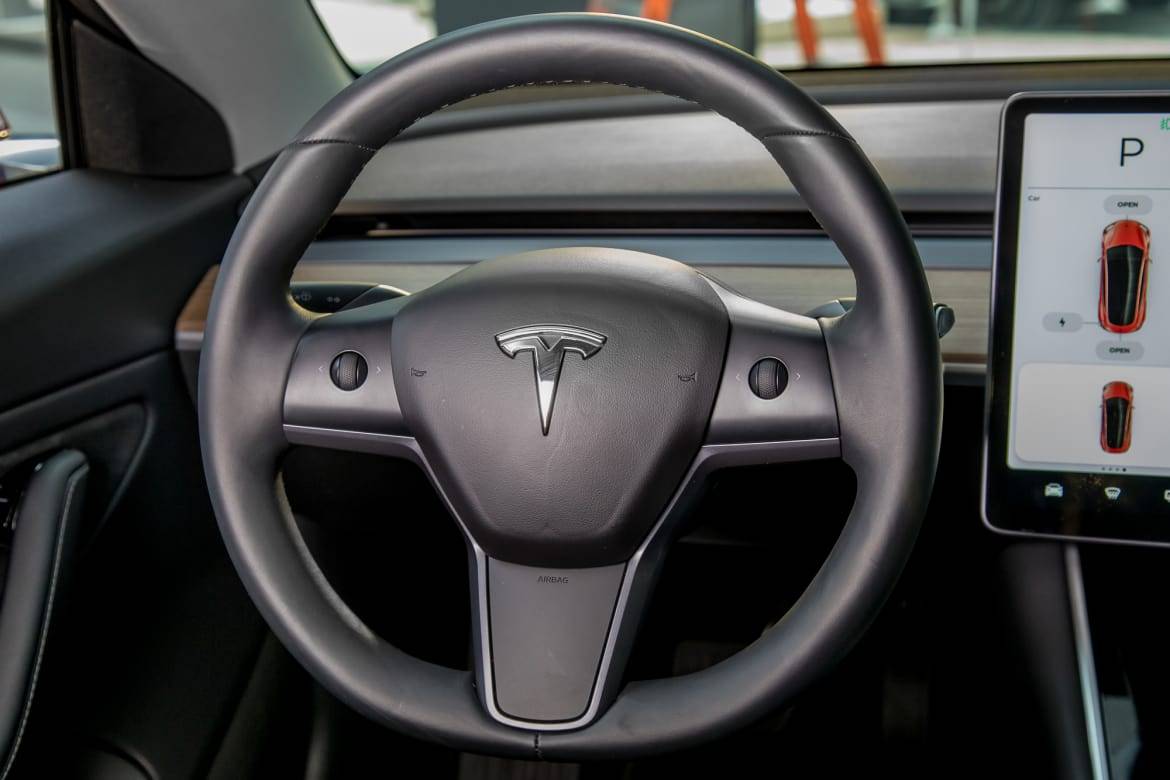 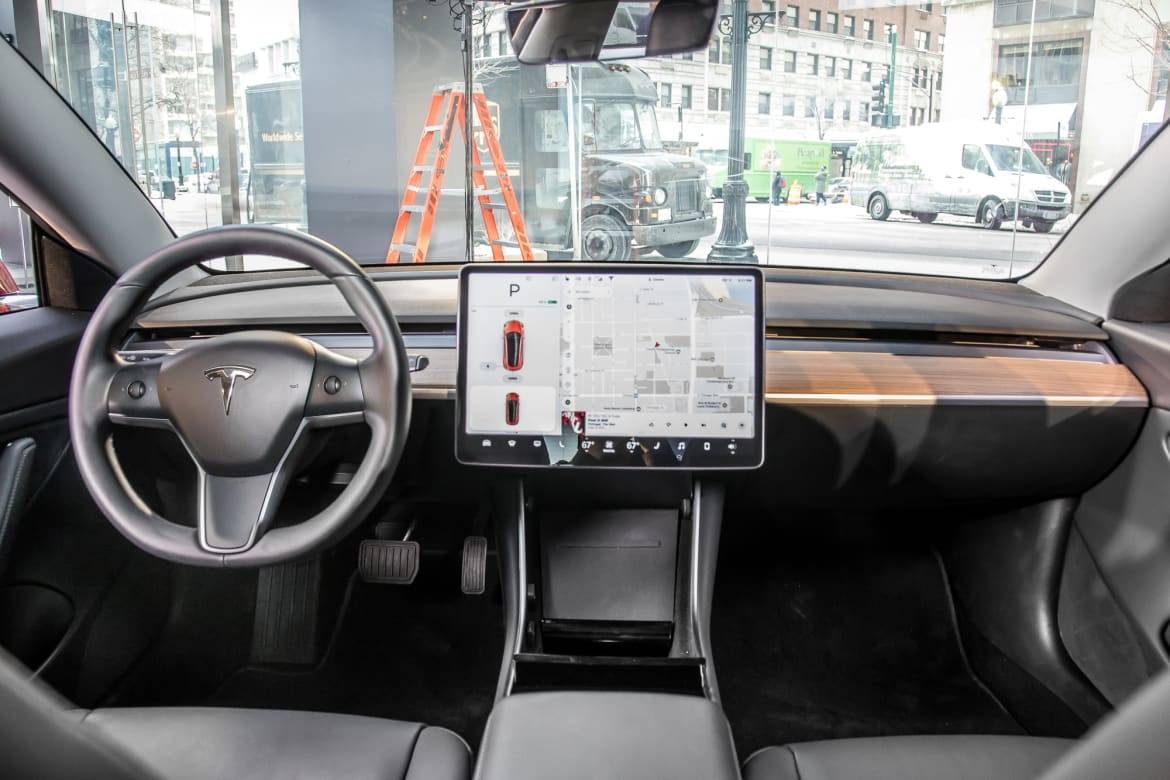 Previous Tesla models such as the Tesla Model S also had large screens, but this one is clearly the fastest and most responsive one yet. One way to test out screens here is to see how quickly and smoothly the navigation screen can move around the map and zoom in and out, since that can be a processor-intensive exercise for these screens — especially when using multitouch gestures.

Even when using unnaturally fast motions to zoom in and out and twisting the map around to boot, the Tesla Model 3’s system keeps up. The screen in the Model 3 is the slickest one I’ve tried in a car; it felt just as fast as my phone (when it was new) or an iPad, which is impressive. Menus open without hesitation, so there’s no waiting around for the system to think.

2. It’s Less Complicated Than We Thought

Another thing Tesla has done well with the screen: It has a solid layout and fewer sub-screens than you might think. Tesla has taken advantage of the real estate the larger screen provides to put much of the car’s functionality that would be accessed regularly within one press of the screen; there aren’t many levels to sift through to find what you want.

For example, if you want to change the user profile of the driver, you just hit the user button at the top and select a new one. Need to adjust the Tesla’s mirrors? That’s part of a setting screen that sits permanently below a graphical representation of the car on the left. Atop that, the first screen of that menu has “Quick Controls,” which are customizable.

3. You Can See One Side of the Screen Easily

It may appear too far to the right at first glance, but sitting in the driver’s seat, you’re able to catch the speedometer in your peripheral vision rather easily without turning your head. Tesla isn’t the first to move the instrument panel to the middle of the car. Cars like the Toyota Prius have done that for years, as well, albeit just on a display that’s a little higher up.

However, the right side of the screen is too far to see easily, which is a problem when you’re trying to quickly catch a glimpse of the map or active navigation directions. Many cars have started to place navigation prompts in the instrument panel or the HUD to move them closer to the driver’s line of sight, but the Model 3 does the opposite and moves them farther away.

4. It Has Some Easter Eggs

Like Tesla’s Model S, there are some fun Easter eggs in the Model 3’s screen, including a painting application, a Santa mode for the holidays and a Mars feature that shows the Curiosity rover, which is currently exploring the red planet.

5. We Still Miss Some Physical Controls

I’m sure that after an adjustment period, I’d be able to navigate the climate-control menus as well as those to change the various internet streaming radio stations (via a 4G LTE connection that comes as standard equipment on the Model 3). But there are a few physical controls that I’ll miss beyond our standard gripe about missing volume and tuning knobs.

It seems that all of the Model 3’s driver-assistance features will also be run through the screen. While the stalk can be used to activate the adaptive cruise control and Autopilot functionality, there aren’t buttons or a method outside the screen to change the speed at which it’s set — something I do often when using this feature.

The Model 3’s screen is undeniably beautiful, and it nails the look and speed parts of the equation. Our trepidations about moving all of the controls into the screen remain, however, especially with the placement of the Model 3’s screen. There isn’t really a place to rest your arm or wrist to use it, so it will be harder to use muscle memory to find smaller controls while driving. And that test — how it performs on the move — will ultimately be the most important one it has to ace.