After more than a year with our 2011 Nissan Leaf, we finally got the opportunity last week to charge it using one of the first public Level 3 quick-chargers installed in Chicago. We purchased our Leaf with a dedicated quick-charge port (then a $700 option, now standard on the SL trim level), but with the exception of an experimental mobile unit from Real Power that visited us last summer, the high-voltage quick chargers that were part of the promise of making life with an electric vehicle easier, failed to appear.

Delays resulted mainly because manufacturers struggled to get the hardware certified and networked to manage billing. It was a day of firsts for us, because this was also the first time we paid to charge an EV publicly. Level 2, or 240-volt, public charging has been free for us until now.

We chose a quick-charge location at a “cellphone parking lot” by Chicago’s Midway Airport. That’s where you sit and wait for your loved one to arrive instead of double parking in the arrival lanes, generating the ire of airport security. This is where one of three confirmed, operational Level 3 QCs the city has installed on its way toward a planned 73 — along with 207 Level 2 installations — resides.

The second option was at a tollway oasis, where most quick chargers will appear, and the third in a pay parking structure — the latter a strange choice since you end up paying to park as well as paying the charging fee, which the city has set at $7 per session. We headed to Midway with our Leaf and a 2012 Mitsubishi i — the only other current EV with a quick-charge port.

These quick chargers are on a network different from our usual one. (Can you say Betamax versus VHS?) We’ve been charging at Level 2 for more than a year on the ChargePoint.net network. Fresh from the mail, our prepaid CharJit network card (http://350green.com/card/) was loaded with $21 dollars, and when I tapped it on the kiosk, I was instructed to plug in the car and press Start.

Unlike the regular pistol-grip connector on Level 1 and Level 2 charging cords (designated J1772), quick chargers use a larger-diameter connector, called CHAdeMO. Rather than a single trigger release, this one has a button plus a separate trigger lever. I suspect using this connector is easy to use when you know how — and I clearly didn’t. Co-workers likened it to getting an electric hedge trimmer to start. After a couple of false starts, I removed it from its dock and plugged it into the Leaf.

When I pressed the start button, the charging began, as reflected by the blue indicator lights atop the Leaf’s dashboard. We started the stopwatch. In theory, a Level 3 charger can provide an 80% charge within 30 minutes.

Our Leaf’s battery-level meter started with one bar out of 12, or just over 8%, with a predicted range of 12 miles. The range increased by two to three miles for each minute of charging. For comparison, we’re happy to see our Leaf add 10 miles of range for every hour of charging at Level 2.

As the minutes passed, the charging slowed. By the 10-minute mark, it was adding two miles of range every minute instead of three. After about 20 minutes, it was adding one mile per minute most of the time. After 30 minutes and a predicted range of 79 miles, the session ended. The battery-level meter showed eight bars out of 12. This being a 67% state of charge, we clearly hadn’t reached our goal.

Rather than spend another $7 for one to two more bars, we gave the Mitsubishi i a turn. The only difference with this car was the sound of a loud cooling fan accompanying the charging process. (The Leaf has no fan.) The Mitsubishi started with its battery half full and doesn’t allow range monitoring while it’s charging, but within 10 minutes, the session had ended. According to the Mitsubishi’s bar graph, it had hit roughly 75%, which I’ll accept as good enough.

Why the difference between the two? It’s partly because the Mitsubishi has a smaller battery, so taking it from 50% to 75% requires less energy. I’m more concerned by the Leaf session and the way we were billed.

There’s a lot of fine print to owning an electric car, and now that Level 3 is available, we see there’s fine print for quick-charging, too. As with Level 2, the quick-charging rate depends on temperature. A recent revision to our Leaf owner’s manual explains that quick charging can take up to 90 minutes or longer, depending on temperature. The optimal battery temperature, based on a gauge on the instrument panel, is seven or eight bars out of 12. Here’s the problem: our Leaf’s battery-temp gauge has never been below four segments or above six through Chicago’s extreme seasons.

During our field trial, it was a pleasant 52 degrees F. Does this mean it would charge even more slowly if it were 42 or 32 degrees? Our Level 2 experience suggests that that’s likely.

Knowing that the much-marketed 30-minute quick-charge time is actually a loose guideline, the city of Chicago’s 30-minute timeout could be a problem for anyone who wants to fill a Leaf to 80%.

Our second session also ended automatically when the Mitsubishi hit the target charge level. Presumably, because we pay per session rather than per minute, the 20 remaining minutes from that session were lost. So, for one car we paid $7 and didn’t get the full charge, and for the second car we paid another $7 and got 24% of a charge. Had we started a second session for the Leaf, to top it off, we would have used a partial session and paid $14 total for an 80% charge.

Obviously, this payment scheme isn’t a good one, but you can’t necessarily blame the operators. It seems logical to pay for what you use, but in most states, only regulated public utilities are permitted to bill by the kilowatt-hour — something that’s being challenged. Until that changes, public-charging providers must bill by session or time. After just one attempt it seems time would be the better way to go.

If we were being billed by the minute, we could have kept our Leaf connected until it was full and then topped off the Mitsubishi, and we still wouldn’t have paid for a full 60 minutes. With this arrangement, EV drivers could stop and charge for five to 10 minutes to extend their range rather than running the battery perilously low to be sure and get their money’s worth at a flat-fee session.

Let’s look at cost of operation: The best-case scenario is we pay $7 and leave with our Leaf’s battery 80% full. The EPA estimates the Leaf’s range at 73 miles for a full battery, so the 80% range is 58.4 miles on that $7. Even with gasoline at almost $4 per gallon, a Toyota Prius, rated 50 mpg combined, can travel almost twice as far for the same money. A less efficient gas-powered car would also be in the ballpark.

Quick charging is a convenience, but at this rate, you clearly wouldn’t want to make a habit of it. The electric car advantage comes from charging at home, which costs less than $3 for a complete charge. Another question is how much a Level 2 public charge will cost. We’ll analyze that in a future post.

All photos by Evan Sears for Cars.com 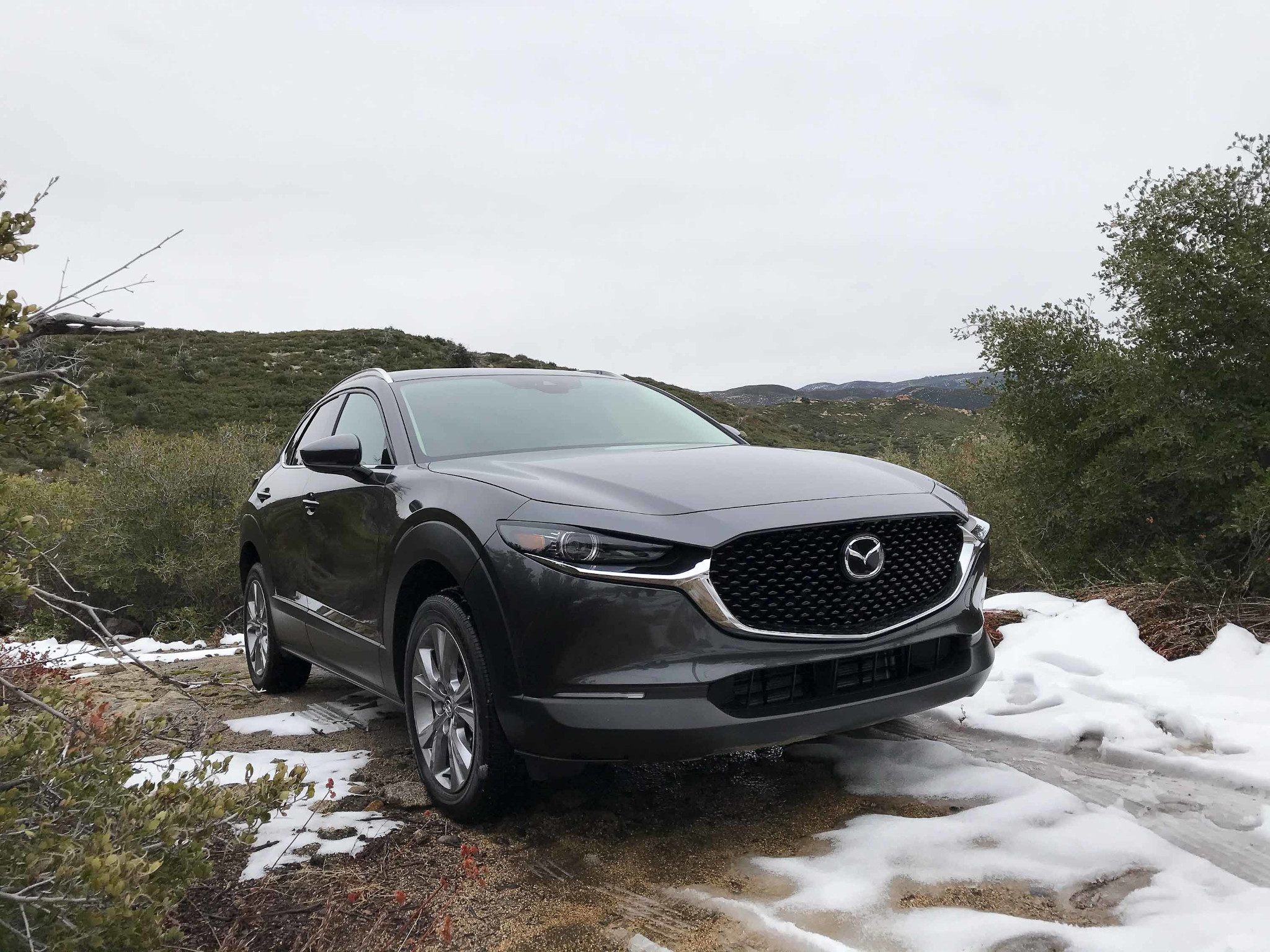 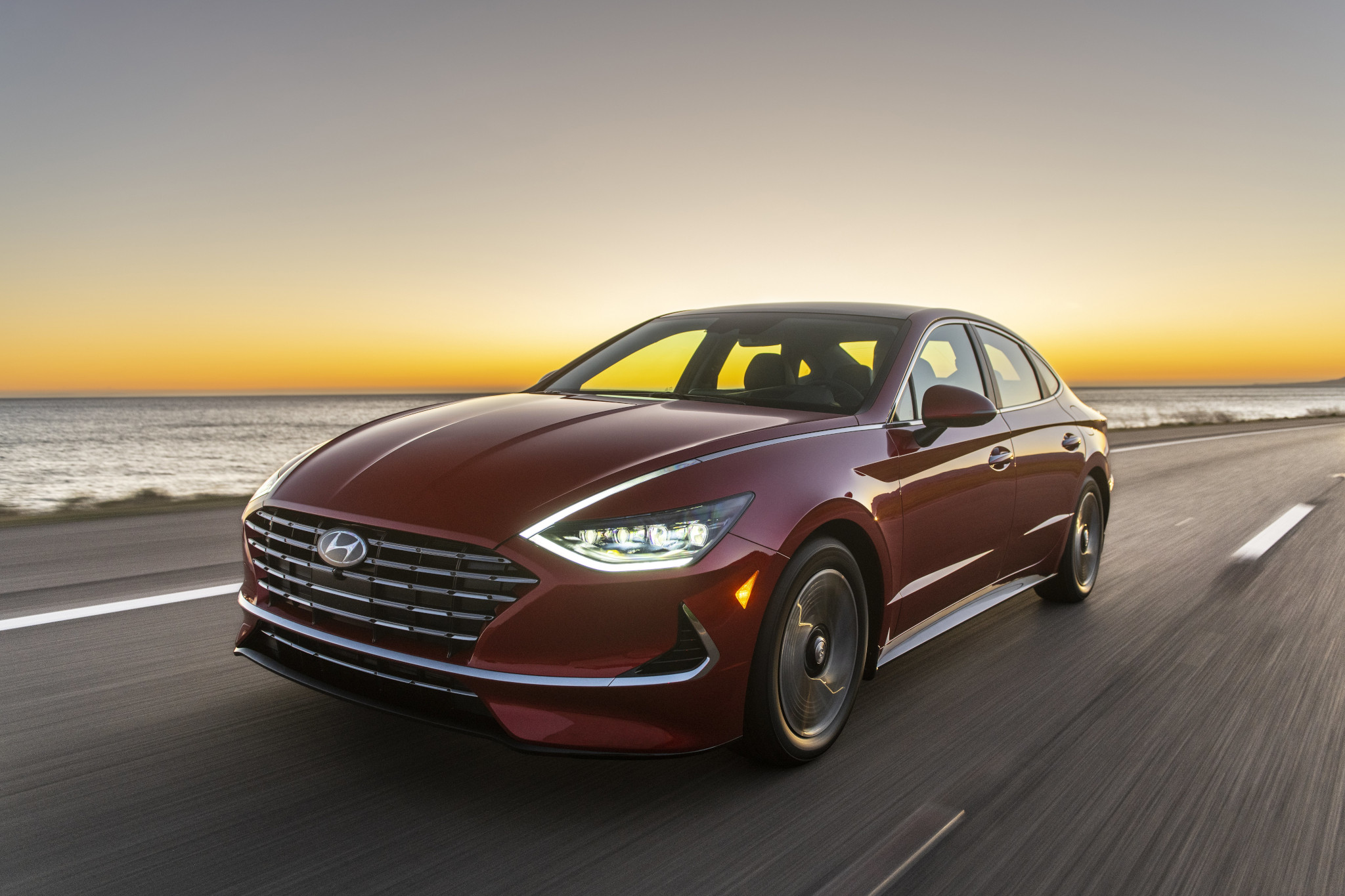